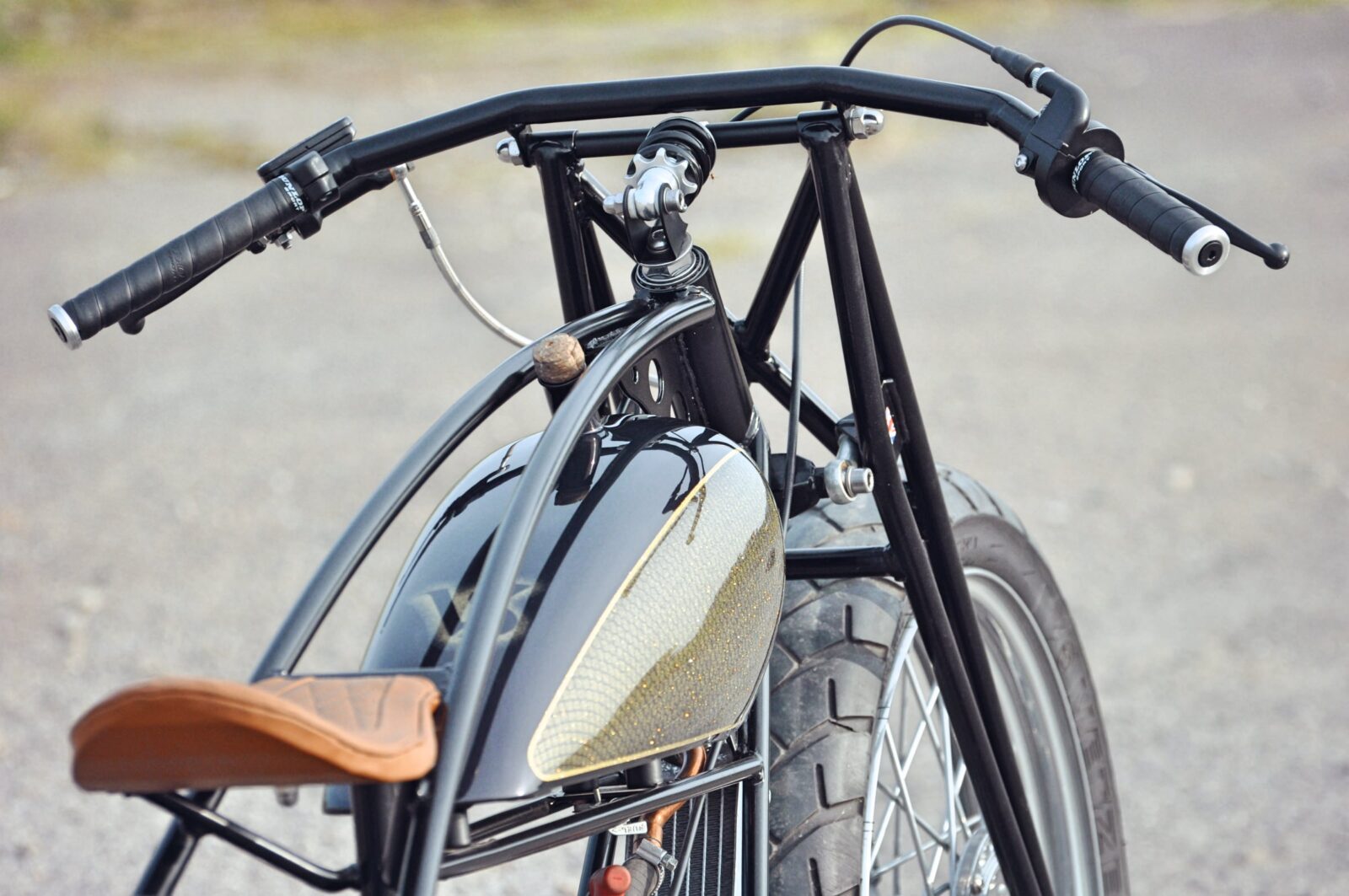 28 Days Later is a custom GasGas built by Valespeed Motorcycles, a one-man operation run by a friendly Brit named Ben who’s based out of Worcestershire in the UK.

Ben’s last build was a land speed racing motorcycle that set three class records at the Pendine Sands in South Wales in 2016 – so he clearly knows what he’s doing.

With 28 Days Later he wanted to go in a different direction and build a fun motorcycle, it may not be about to set any land speed records, but it does look like it’d be a hugely entertaining bike to ride.

The project outline called for a custom motorcycle that Ben could display at the Bulldog Bash – an annual motorcycle rally attended by well over 50,000 people each year. It’s held in August at the Shakespeare County Raceway, situated just outside Stratford-upon-Avon in England (the birthplace of William Shakespeare).

It was decided to use an old 270cc GasGas single-cylinder engine that Ben had laying around the garage as a spare in case the engine in his trials bike ever suffered an unplanned, spontaneous internal disassembly. The GasGas engine is a mechanically simple two-stroke unit, with a single cylinder, a single carburetor, and liquid-cooling. 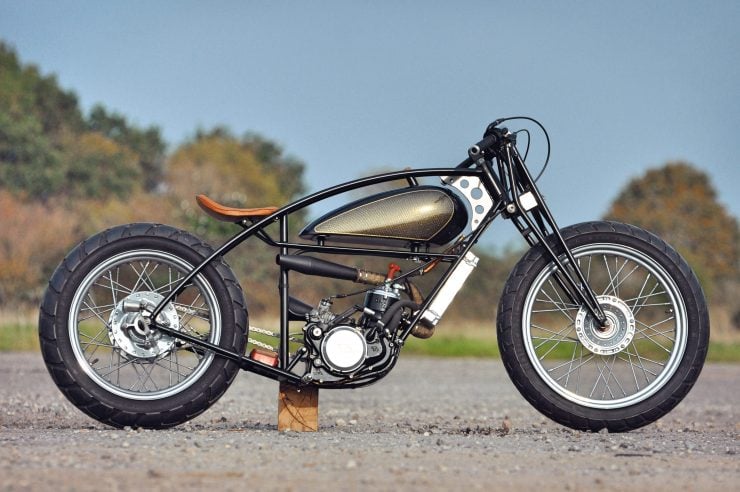 Looking around the garage, Ben also managed to find a pair of Triumph wheels from a previous project, a Huntley & Palmers biscuit tin, some tennis racket tape for the grips, and an old champagne cork for the gas tank cap.

The biggest single piece that was required for the build was the frame – Ben built it himself from 3/4″ steel tubing using a home-brew roller in his workshop. This bespoke frame uses the GasGas engine as a stressed member, and it encloses the fuel tank between the upper and lower backbone tubes, an interesting modern take on the fuel tank mounting method used by many motorcycles in the early 20th century, including many board track racers.

Once the engine was fitted, Ben fabricated an exhaust that curved up around the left side and exits under the rear if the tank into a single muffler. There’s a small radiator mounted upfront, and a small single seat installed in the rear.

Interestingly, the rear brake is installed at the leading edge of the rear sprocket, it’s a cable operated unit that was sourced from an Italian moped. The opposite side of the rear wheel features a brake light and a numberplate mounts, and just in front of the rear wheel lies that Huntley & Palmers biscuit tin – Ben used it to hide all of the electrics.

The completed bike is a masterclass in simplicity and style, there’s nothing on it that isn’t functional, and its board tracker inspired looks will win it admirers across the UK and around the world.

If you’d like to see more of Ben’s work at Valespeed Motorcycles you can click here to visit the website. He does take on customer builds to pay the rent, so if you’re looking for a unique bike builder, Ben might just be your guy. 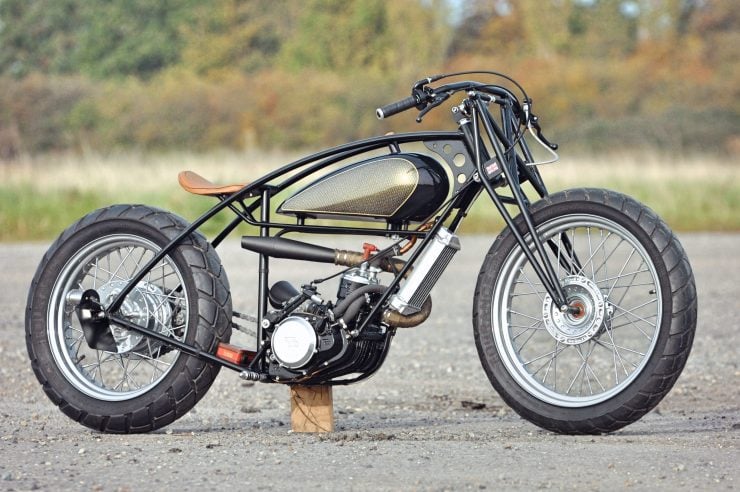 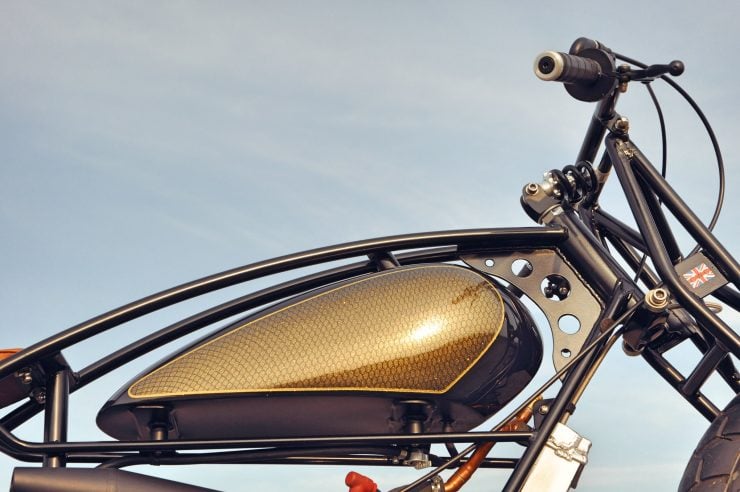 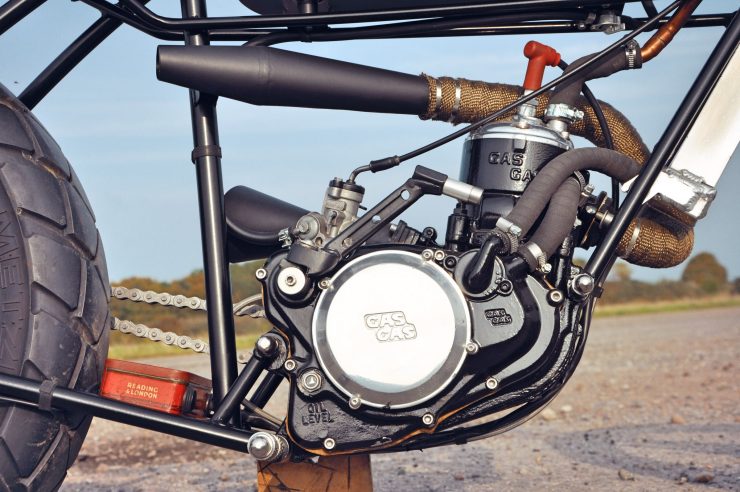 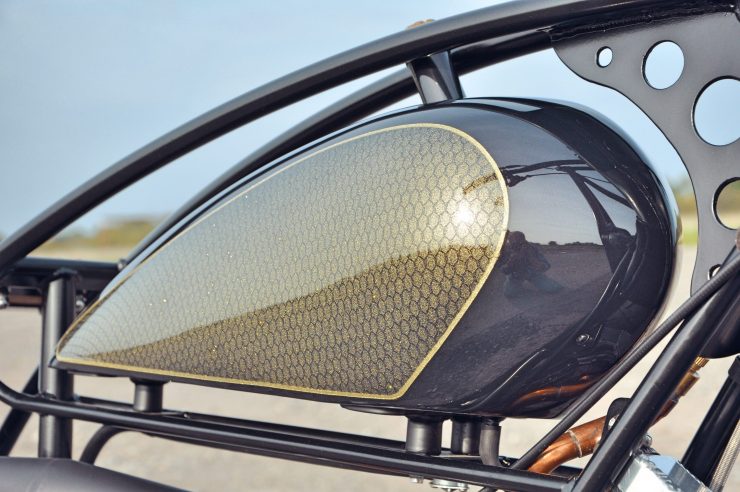 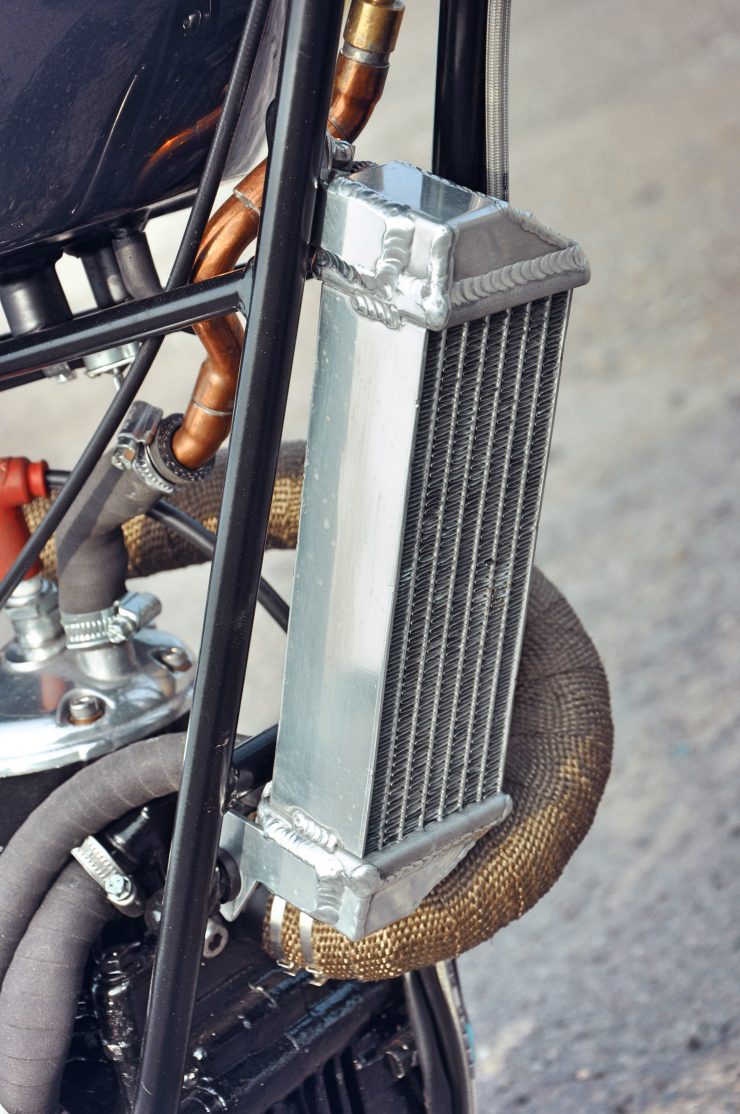 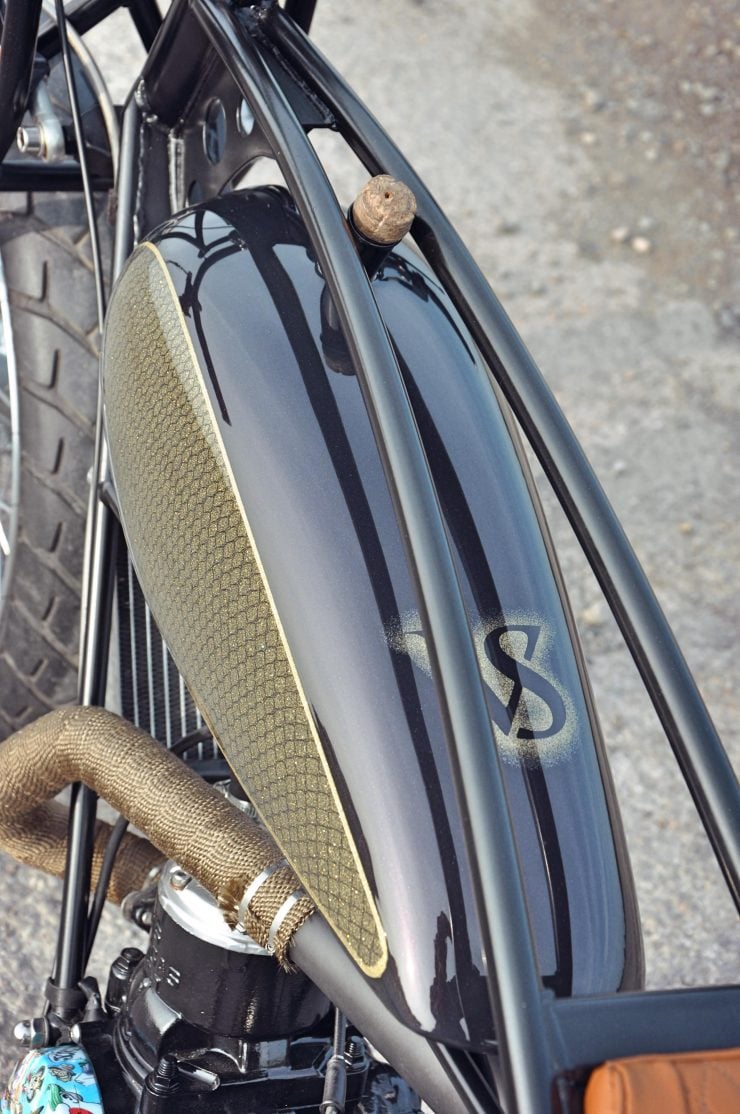 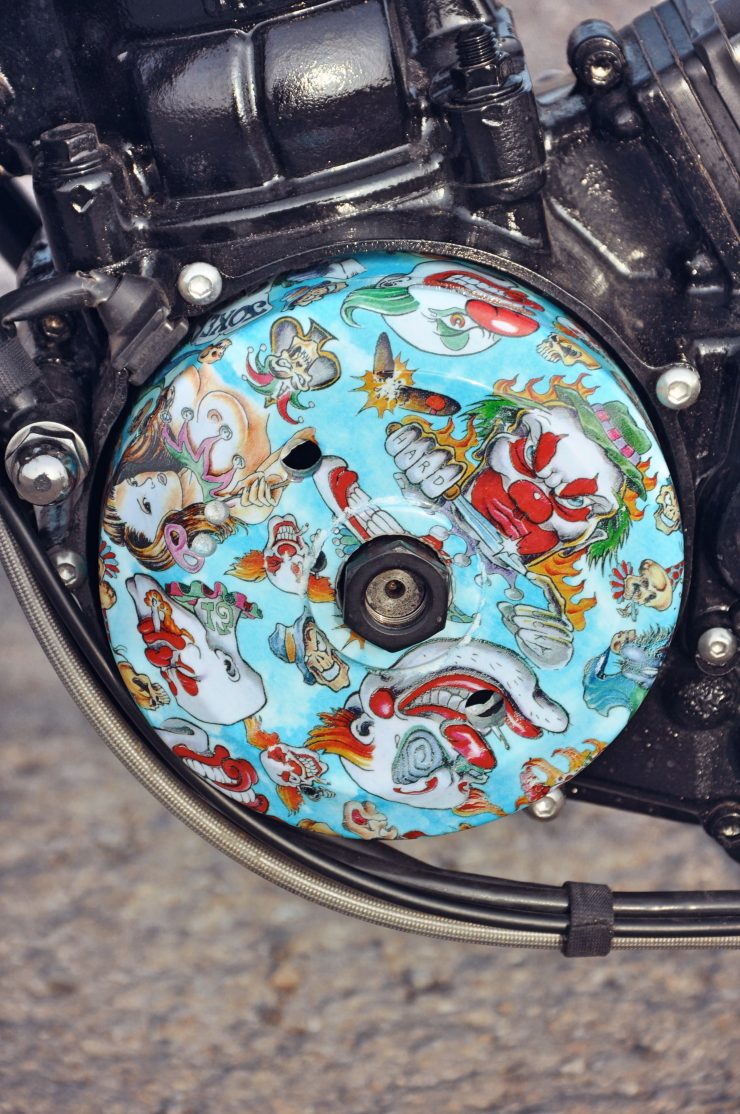 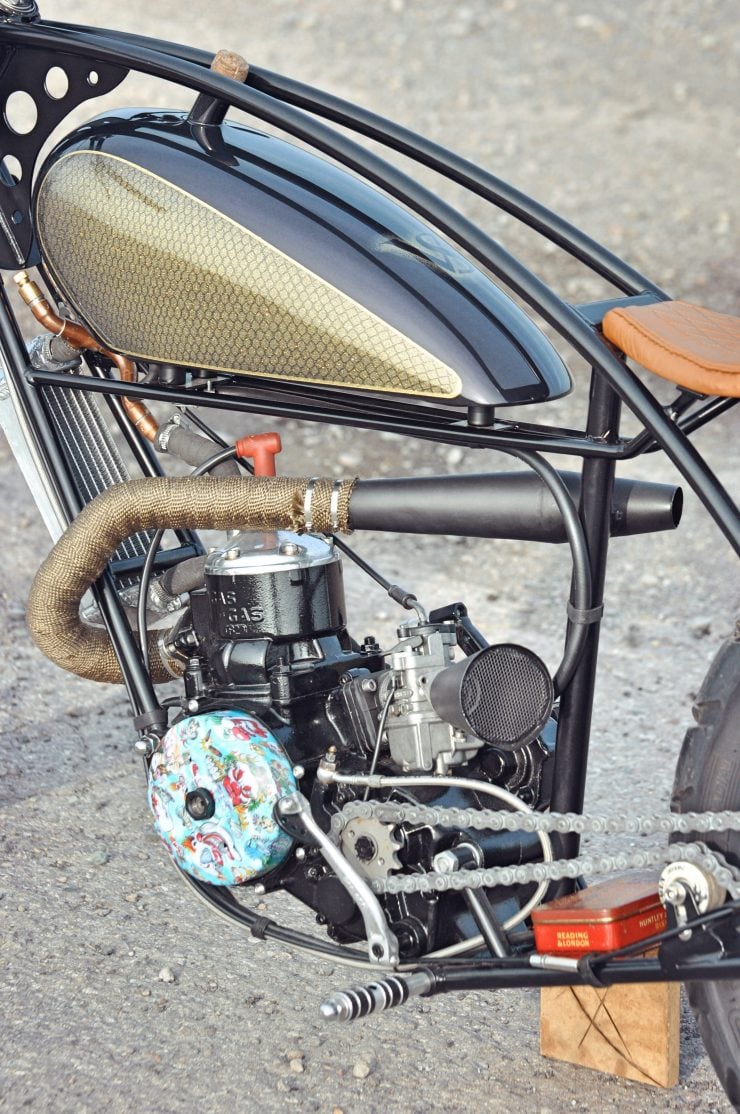 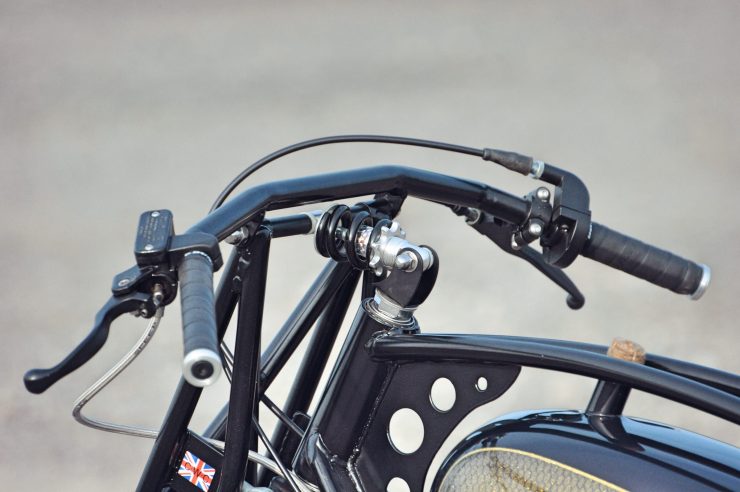 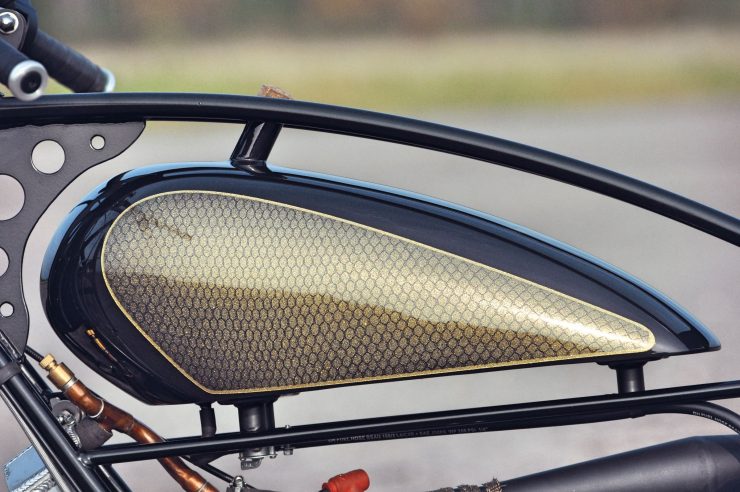 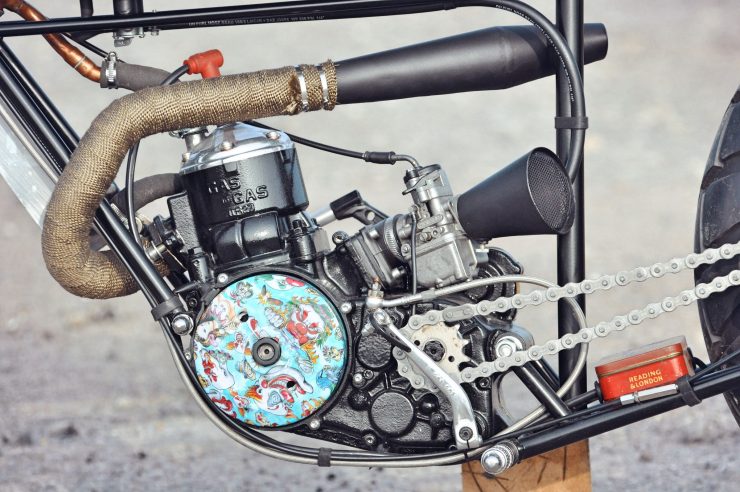 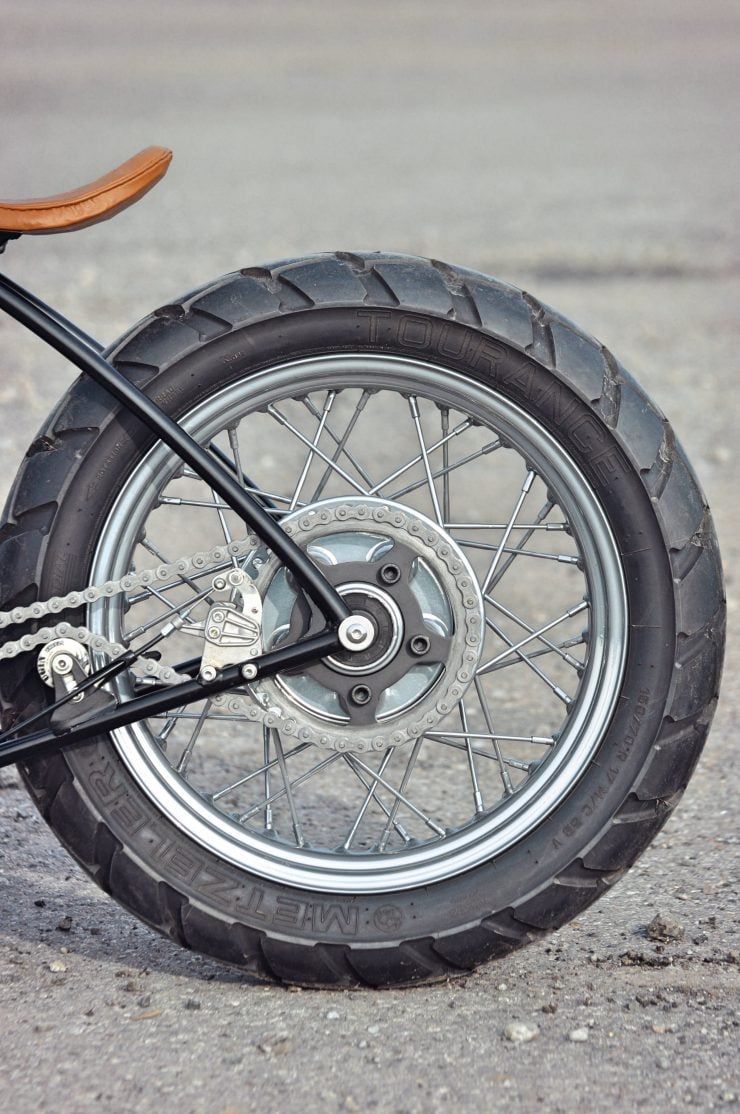 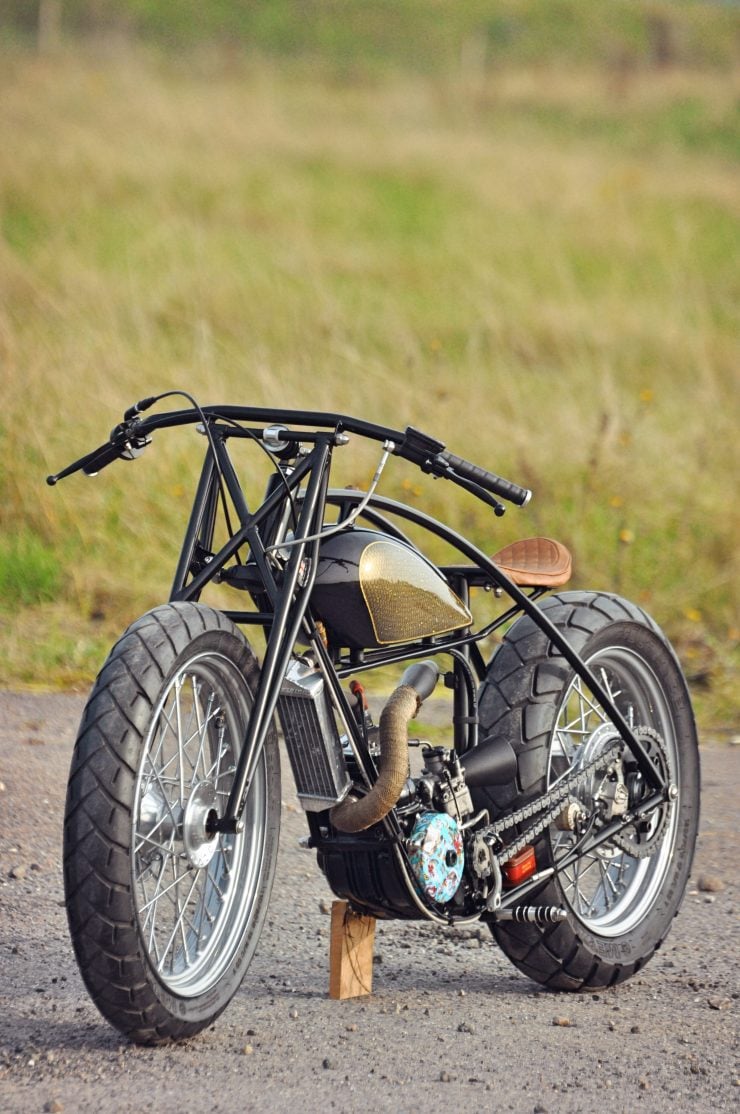 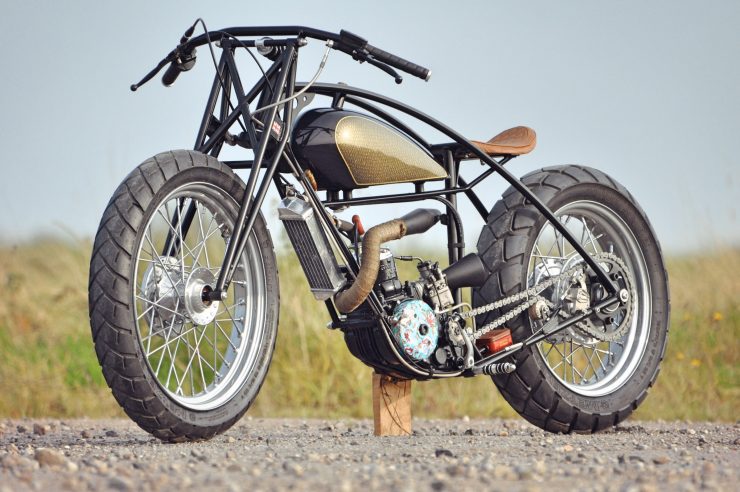 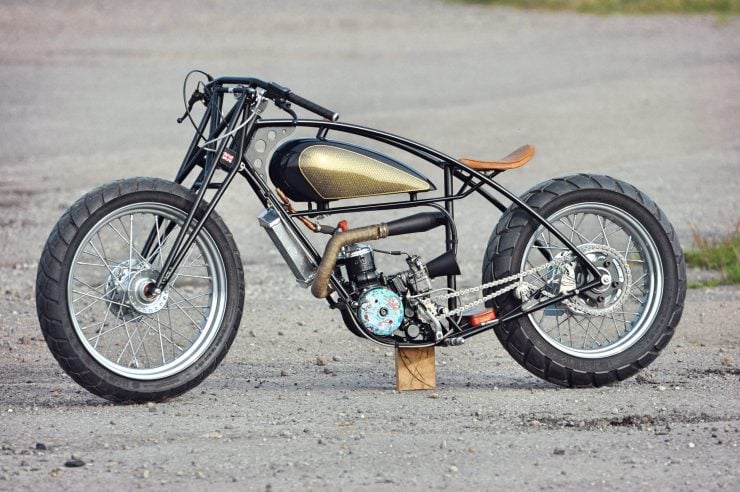 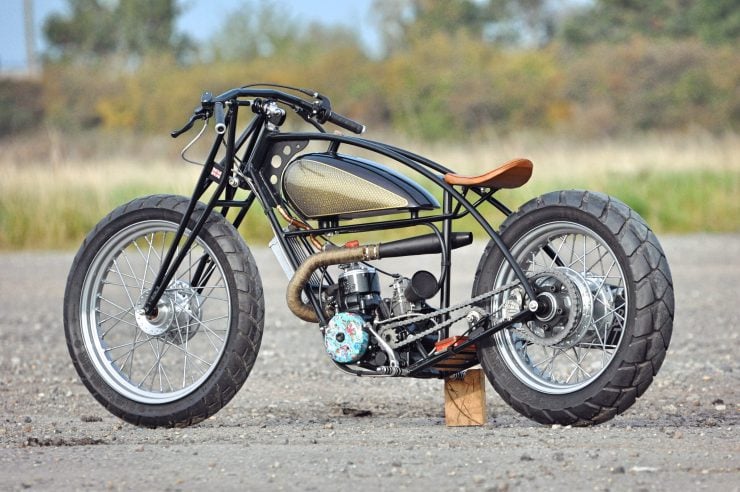 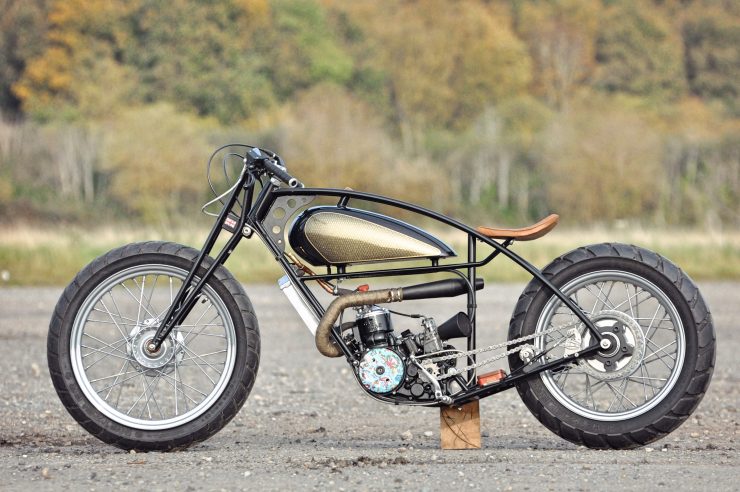 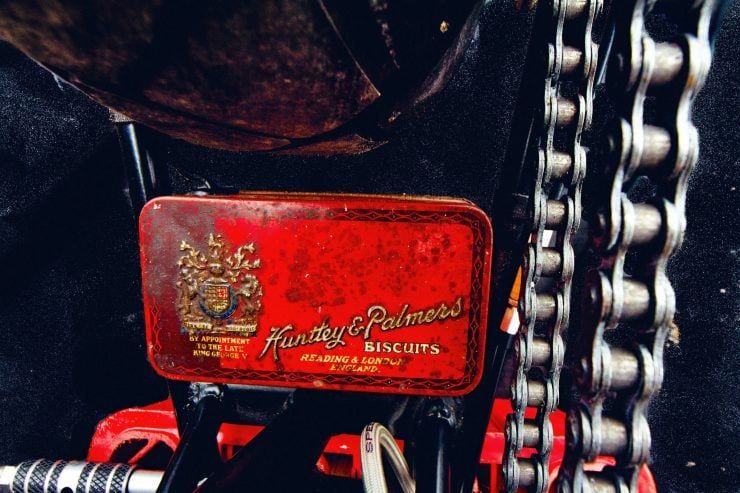 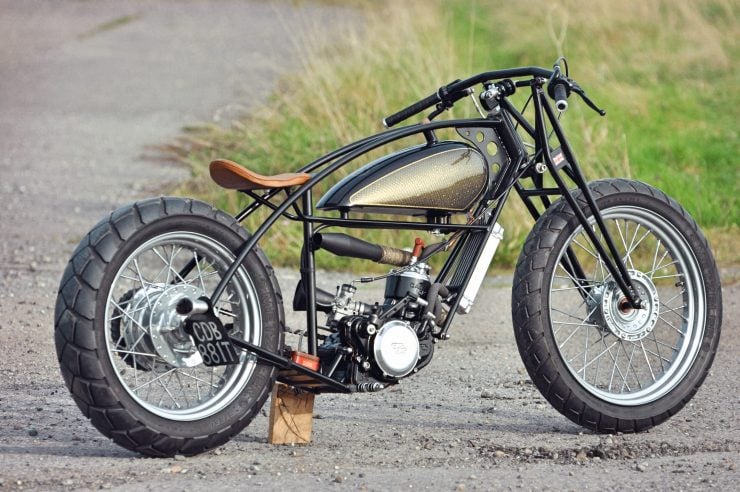 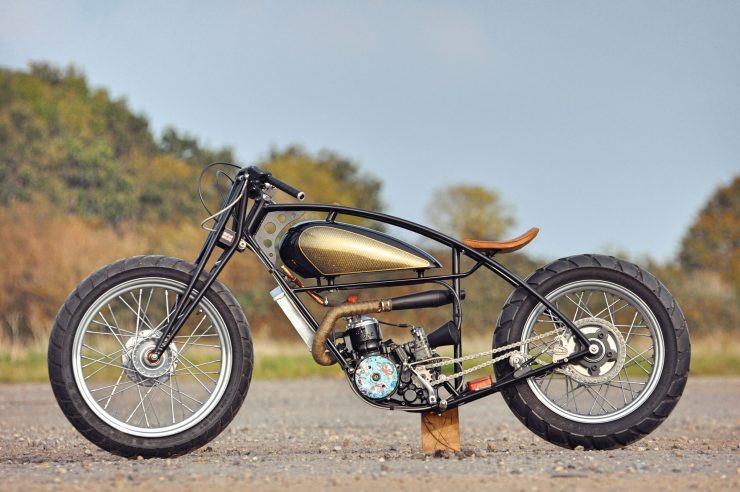