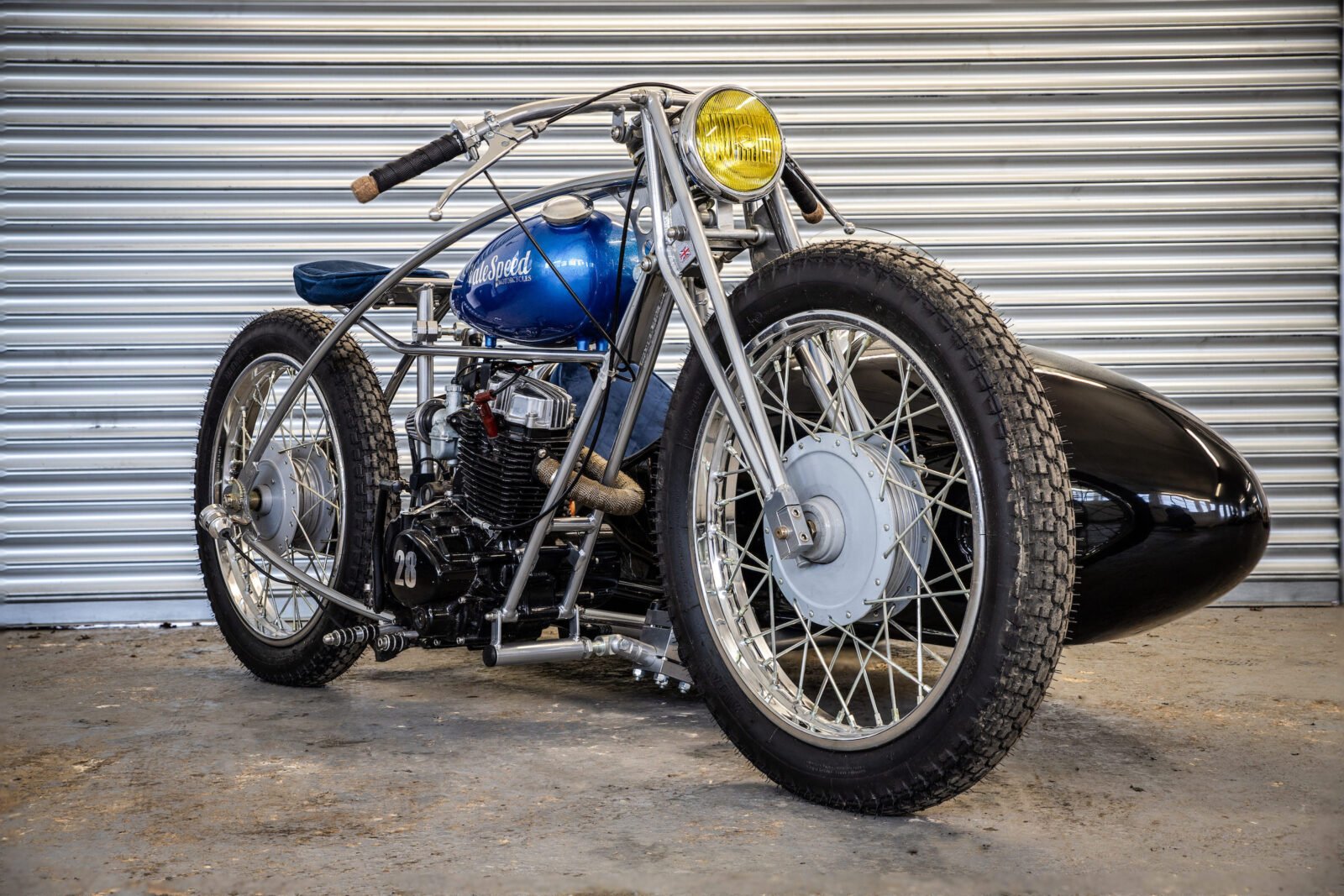 This is the new Valespeed 28 by Valespeed Motorcycles, it’s a limited run production bike that can be ordered either with or without the accompanying sidecar.

Living as we do in the age of Covid-19 social distancing, the humble motorcycle sidecar potentially offers a great way to move two people around by motorcycle without them having to be pressed together sharing the same seat. Despite the timeliness of a sidecar custom this bike was designed and built before the outbreak, but its timing couldn’t have been better.

The Valespeed 28 is actually the second iteration of the much-loved original design pioneered by a British custom motorcycle builder Ben Hall, the founder of Valespeed Motorcycles. Back in 2016 Ben built a land speed racing motorcycle that raced on the Pendine Sands in South Wales, and since then he’s been hard at work on a new series of customs based on the first iteration called “28 Days Later” from 2018. 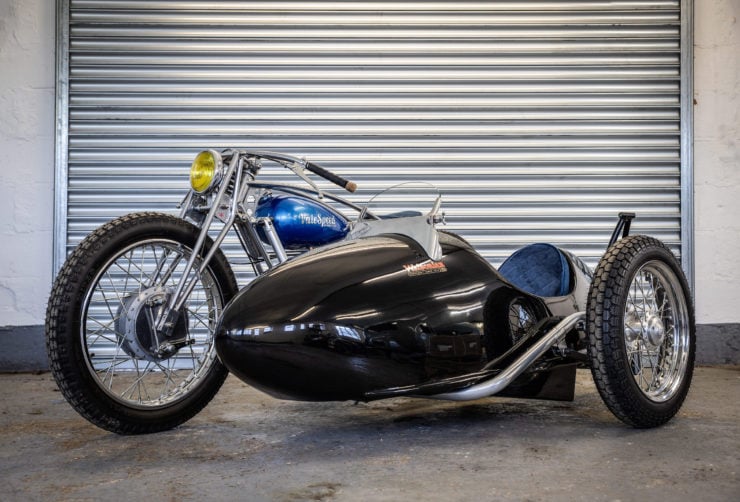 Ben was inundated with messages and emails from people after the release of 28 Days Later who wanted to buy the bike, he quickly realised there was a market for the unusual design and began putting the pieces together to do a limited production run of the design.

When he’s not building customs Ben works with Watsonian Sidecars a few times a week putting his fabrication skills to good use. Watsonian has been building world class sidecars since 1912 when company founder T. F. Watson patented a unique design for a folding sidecar that could be wheeled through through the narrow alleys between terraced houses.

The company built countless sidecars for the war effort (both WWI and WWII), today they remain in business building sidecars for an ever increasing number of modern motorcycles, and Watsonian Sidecars have made appearances in Hollywood films including Harry Potter and the Deathly Hallows. 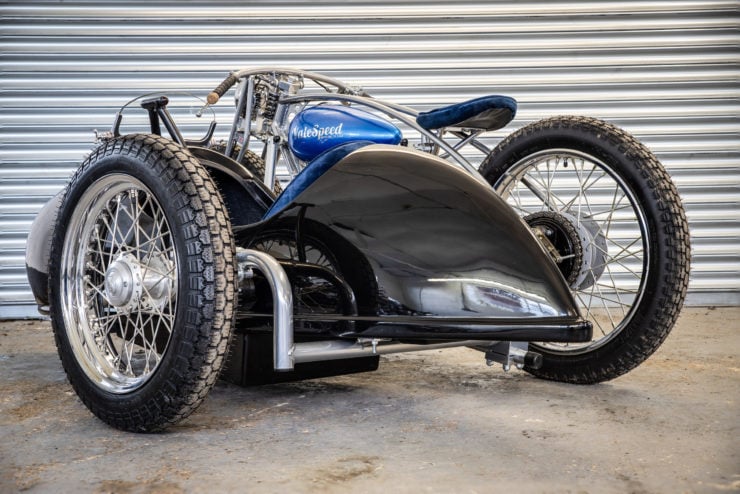 Given Ben’s work at Watsonian, it only made sense to develop a sidecar for this build and then to offer the final run of production motorcycles with a sidecar combination as an option.

The method Ben uses to build each bike is best conveyed in his own words, so I’ll turn it over to him now:

“I fabricate the whole machine myself from scratch. I start the frame by machining the headstock, I then mount this along with the axle plates in the jig. Next I roll the rear tubes to the approximate radius on my roller and tack them in place.

Following this I add a fixture to the jig that looks a bit like a metal Christmas tree, this actually represents the engine mounting points, I make the bosses that attach to this and then put the down tubes in and the seat post, finally I make the headstock gussets and various other brackets and tack these in place. Once I am happy that all is present and correct I begin final welding in a very particular order to avoid heat distortion.

Once the frame is complete I fabricate the “blades” for each side of the front fork, I make the axle clamps on my milling machine and turn up the pivot bosses on the lathe and then lay these bits into a jig and join them all together with ¾” tube, I then make the steering stem and yokes and the links that hold it all together.

The sidecar is fabricated (again by me, but this time with my Watsonian hat on) from 1 ½” tube, this is again made by hand, in Britain, without the use of CNC machinery. I make the fuel tank from two halves and then weld them together so that I can vary the capacity depending on what people want.

I try to use local companies and friends to handle any of the bits that I don’t do. I have the powder coating done by Worcester Powder Coating, this one was done in their chrome finish which I rather like. The seats were covered by my friend Sally of Simply Chairs and the sparkly blue paint was applied by my mate Neil at Tazart Design.

The engine used is a Honda-clone Lifan 156FMI unit with a Mikuni round slide carburettor and a one off exhaust system. The price for the completed bike is £5,995 for the solo model and the sidecar combinations starts at £9,995.”

If you’d like to see more customs from Valespeed Motorcycles or register your interest in ordering a Valespeed 28 you can click here to visit the website. 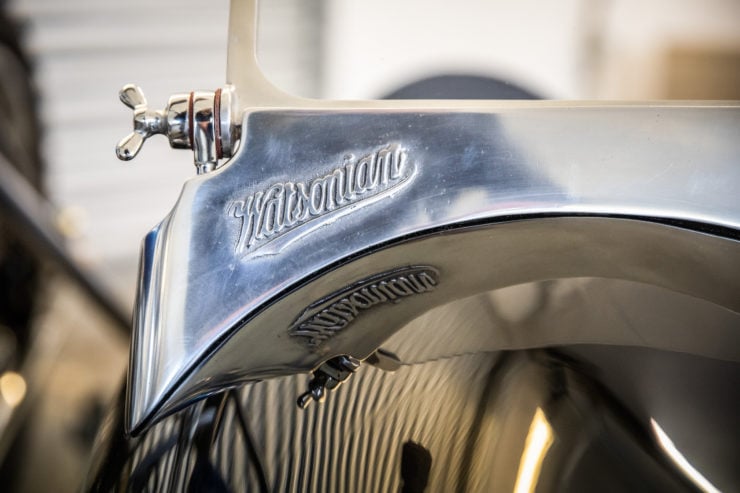 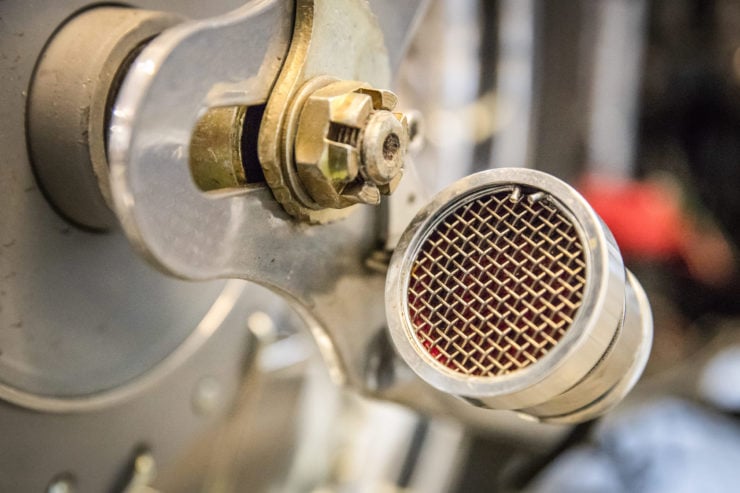 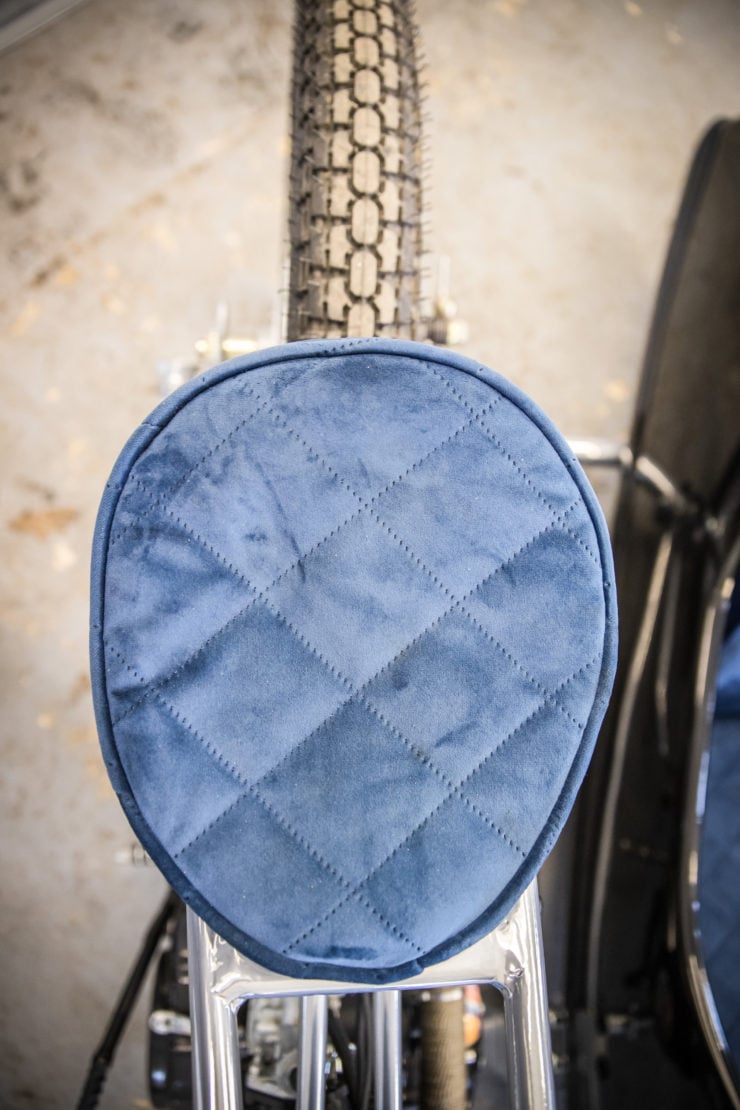 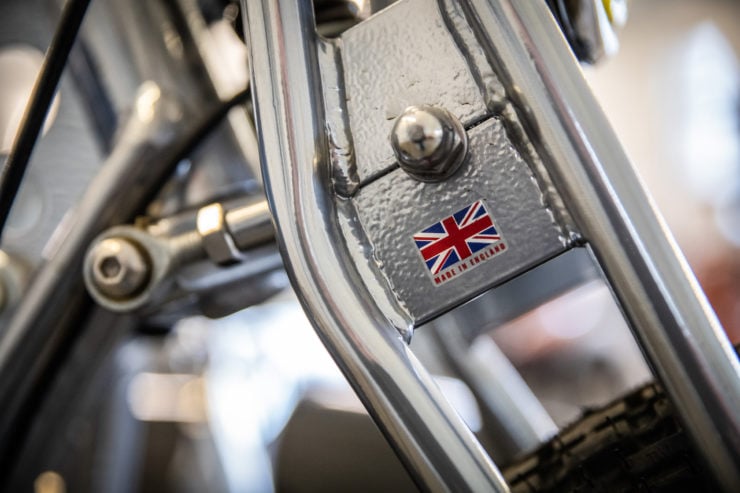 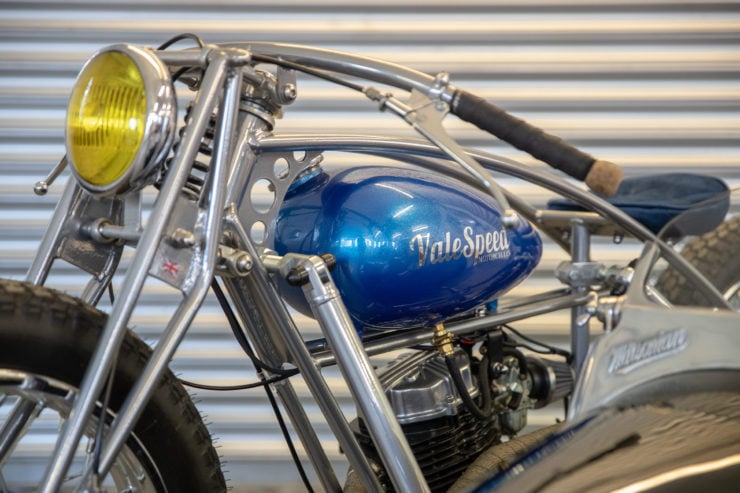 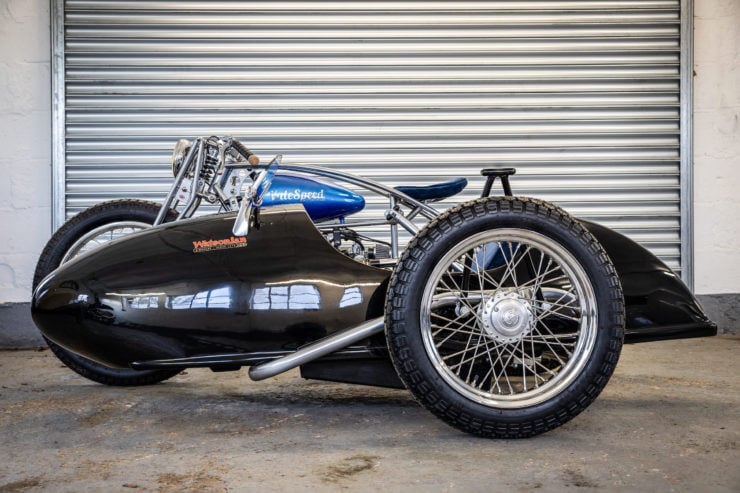 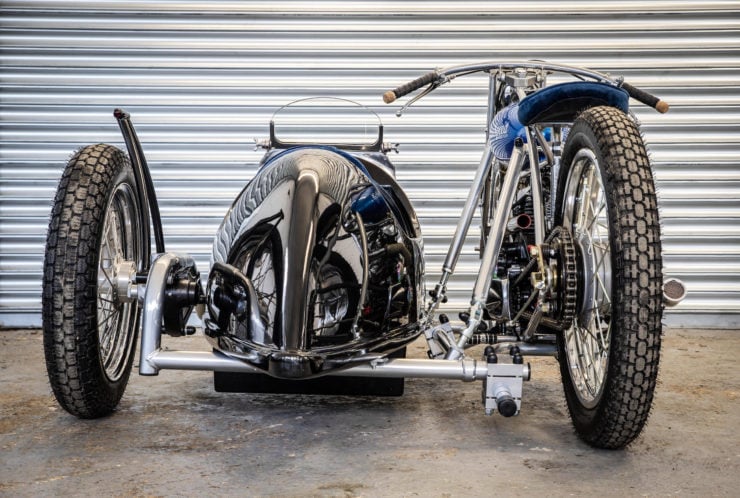 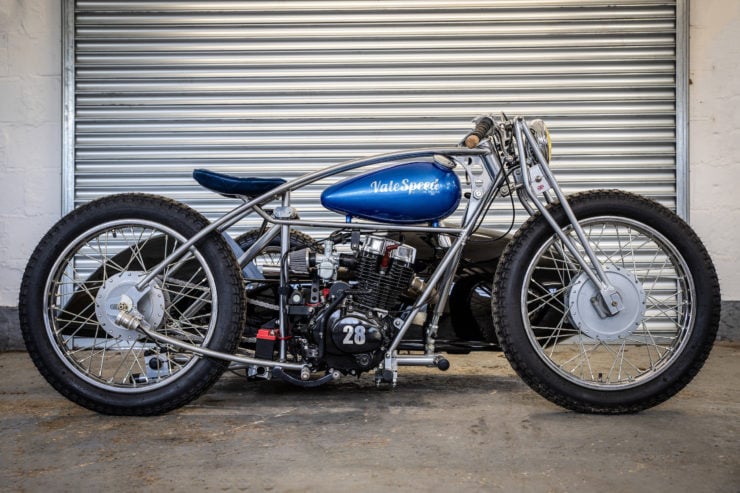 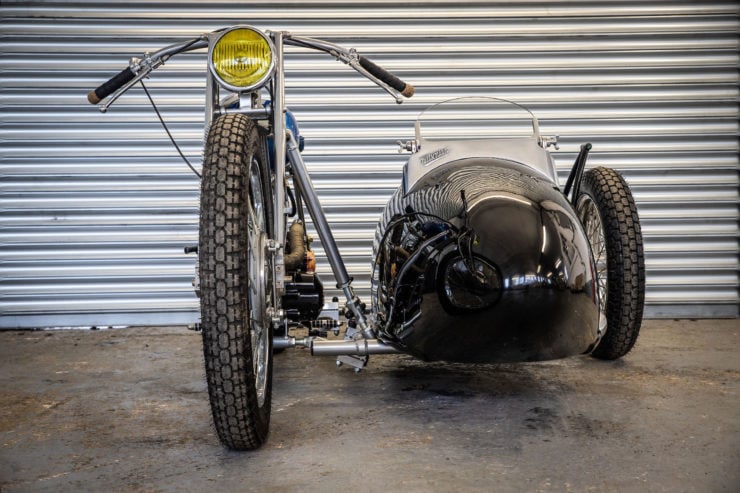 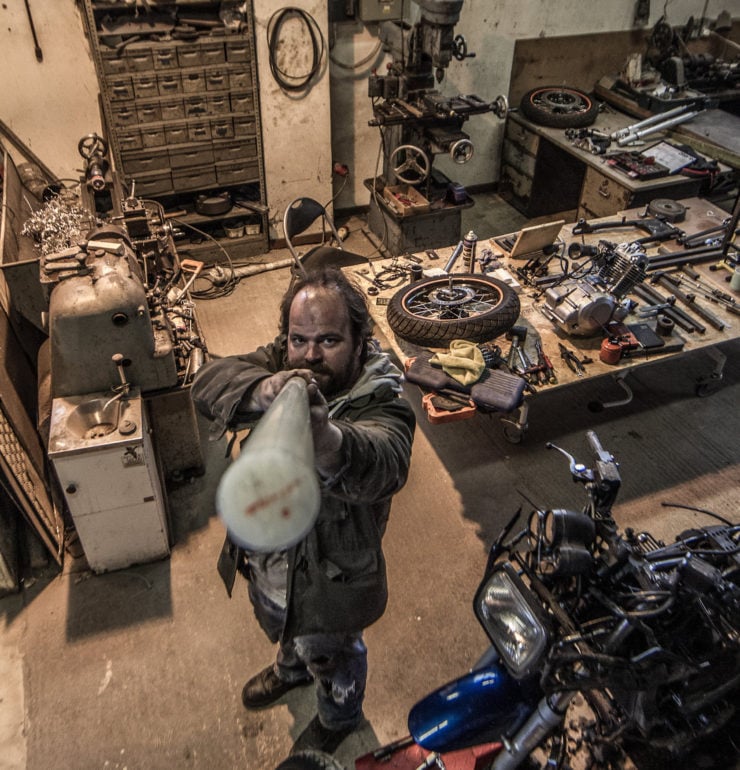 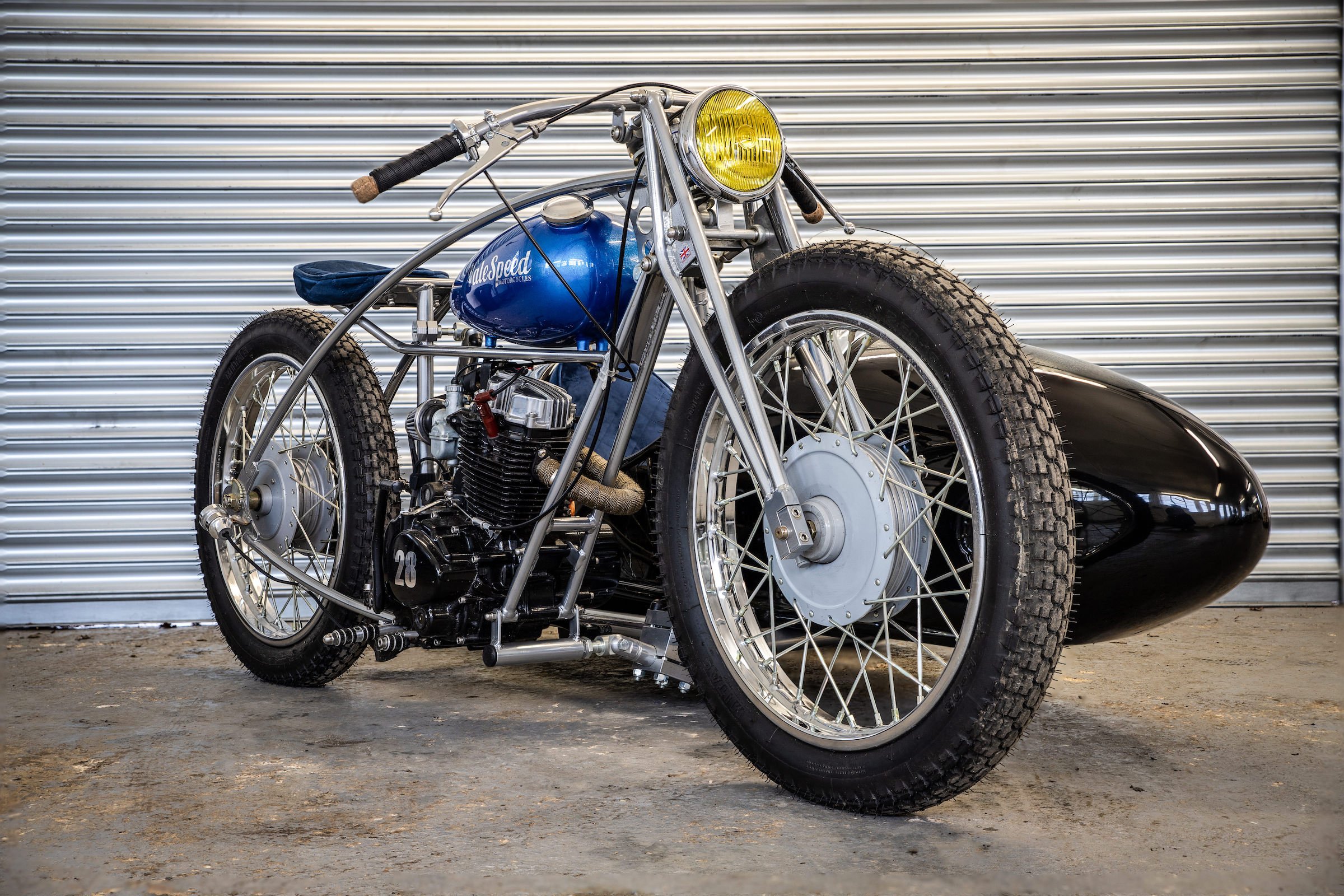