The Hawkers One Triumph Thruxton by Tamarit Motorcycles 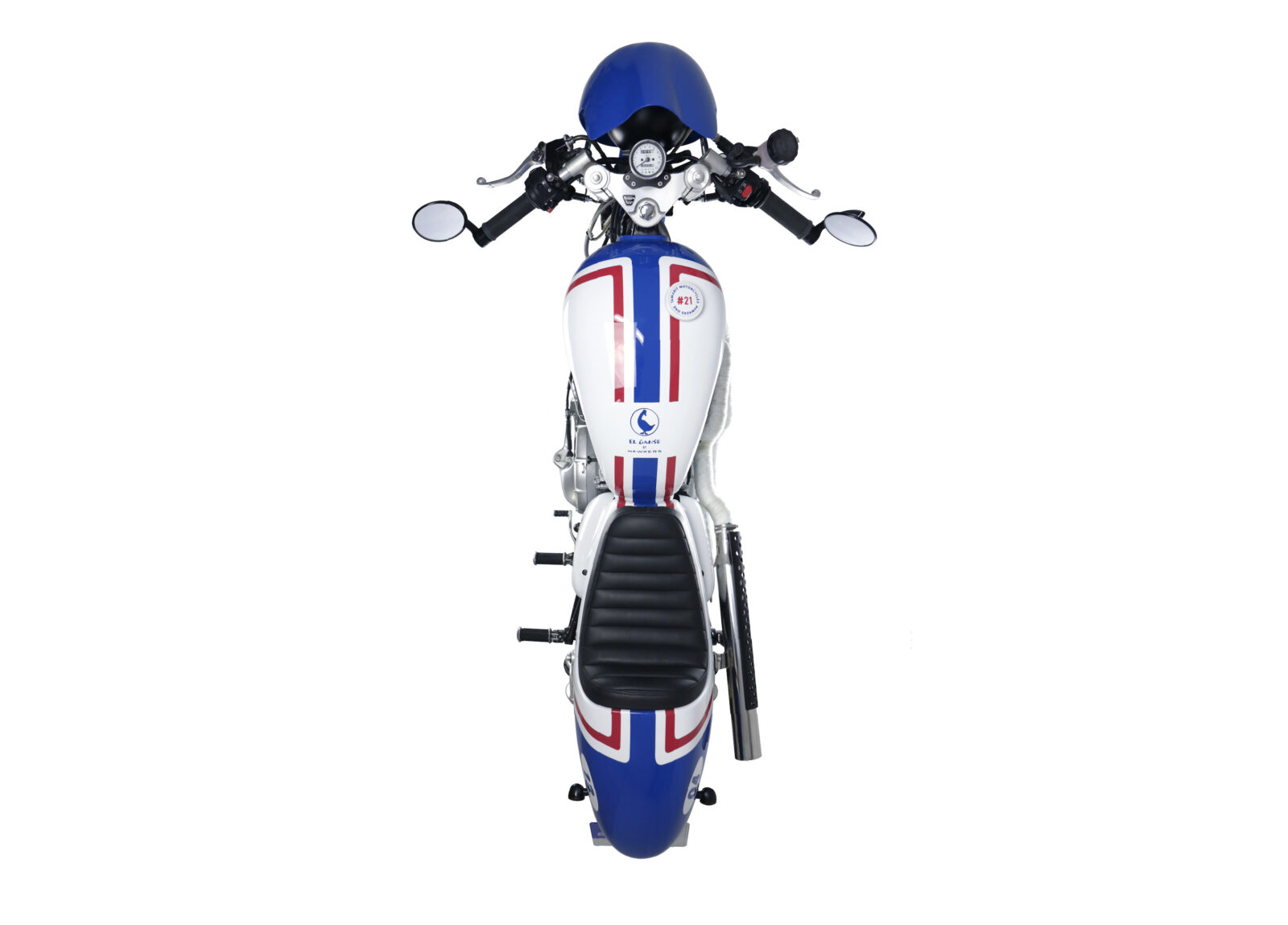 This 2004 Triumph Thruxton was built by Tamarit Motorcycles for Hawkers and El Ganso, the brief was very specific and the timeline was tight – but fortunately the team at Tamarit were able to find a suitable Thruxton in the nearby town of Salamanca relatively quickly.

The Triumph Thruxton 900 was introduced in 2004 as the performance version of the already popular Triumph Bonneville. These were amongst the first of the popular retro-modern motorcycles, and they would help trigger a wave that would soon encompass almost all of the major motorcycle manufacturers including Ducati, BMW, Moto Guzzi, Norton, Honda, Kawasaki, Suzuki, and Yamaha. 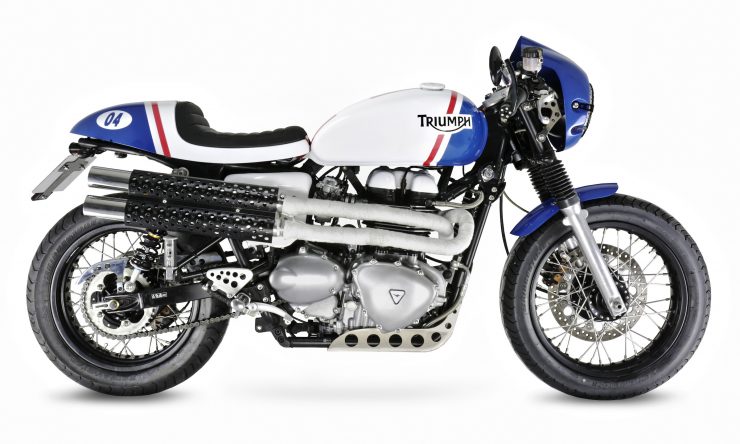 As a hat-tip to the performance past of Triumph, the engineers tasked with developing the Thruxton engine took the oil and air-cooled parallel twin and added high-performance cams, higher compression pistons, and a series of other modifications to take power up to 68 bhp and 53 ft lbs of torque.

The model proved popular both in its native Britain and around the world, and in 2016 Triumph introduced an all-new version with a 1200cc engine and 100 bhp. Despite the new version, the value of modern classic Triumph Thruxton 900 seems to have plateaued in most world markets, with very strong demand from people who want a simple, fun to ride bike with classic lines.

The Hawkers One Triumph Thruxton by Tamarit Motorcycles

The Hawkers / El Ganso / Tamarit Motorcycles joint project began with a meeting and a basic outline of what kind of custom motorcycle was required – the team at Tamarit then went back to base and began hashing out the concept.

Hawkers and El Ganso wanted a retro motorcycle with classic cafe racer lines, a white/blue/red paint scheme, and it had to be great to ride – not just a piece of showroom floor furniture. 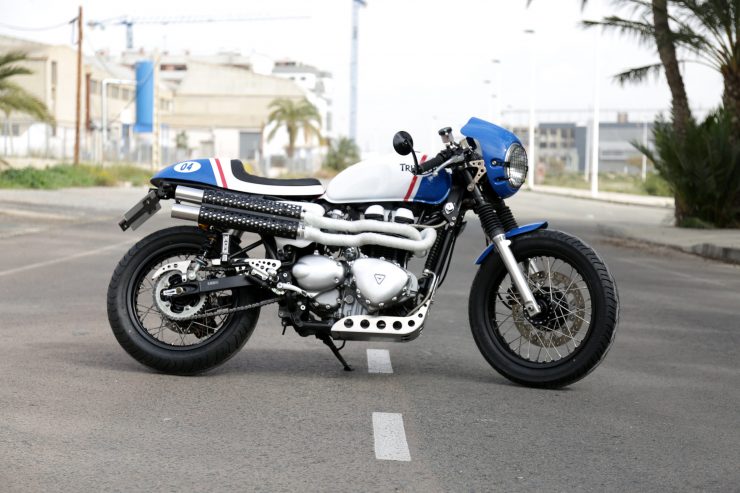 Once the 2004 Thruxton had been located and bought, it was loaded into a van and brought back to Tamarit – as with all of their builds this one began with a teardown and an inspection of parts. The bike was still relatively low-mileage so a full engine rebuild wasn’t needed – just a tune, a change of fluids and filters, and a carburetor clean.

A new Jarama was chosen for the bike in-keeping with the cafe racer theme, this was accompanied by a headlight fairing, a headlight grill, a tail tidy kit, a new side cover, a Papillon exhaust, bar-end mirrors, and a set of black, low-profile indicators.

Painting required seven parts making their way into the booth and receiving a blue center stripe with red outlines on a white background (when viewed from above). The bike was completed a matter of days before the deadline, and it was taken to the grand opening of the new El Ganso Store in Madrid. 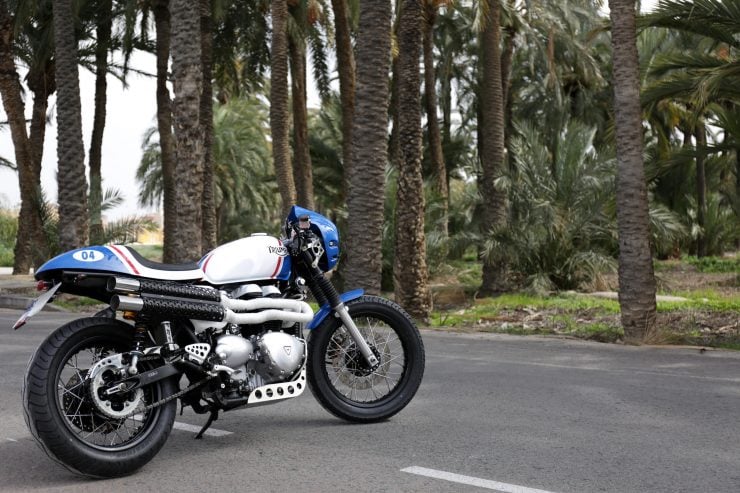 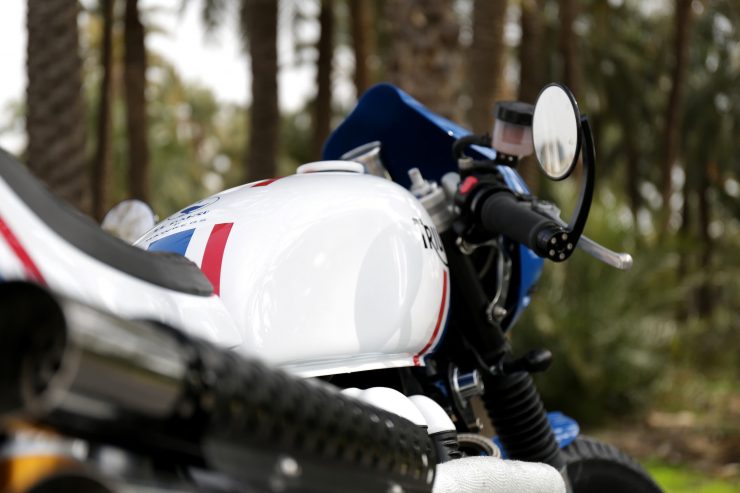 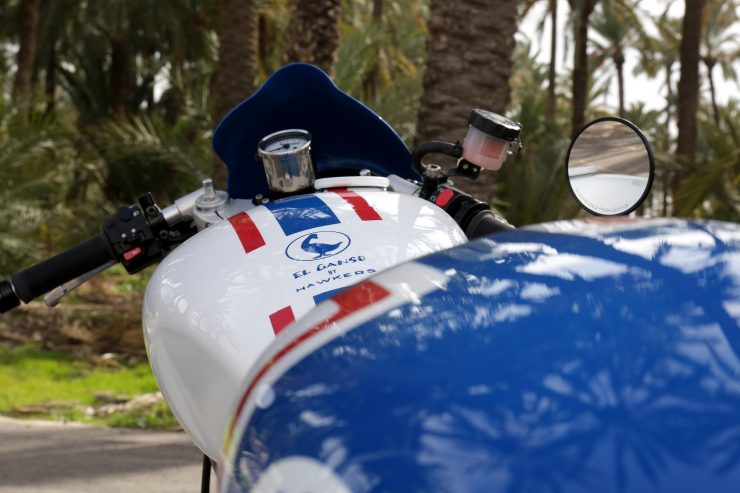 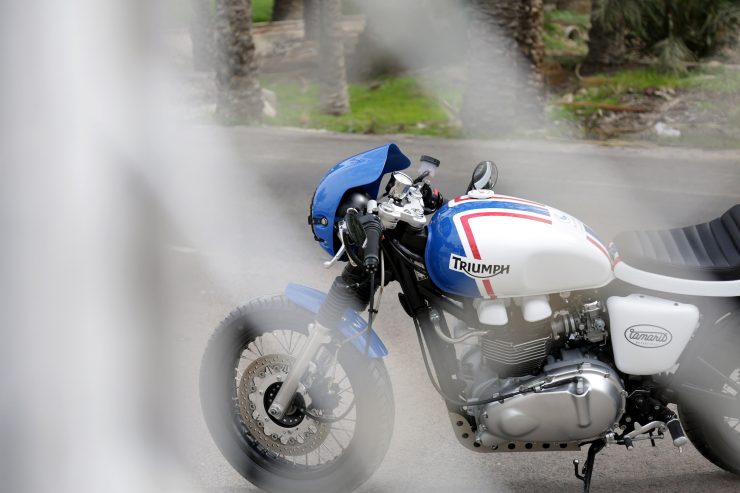 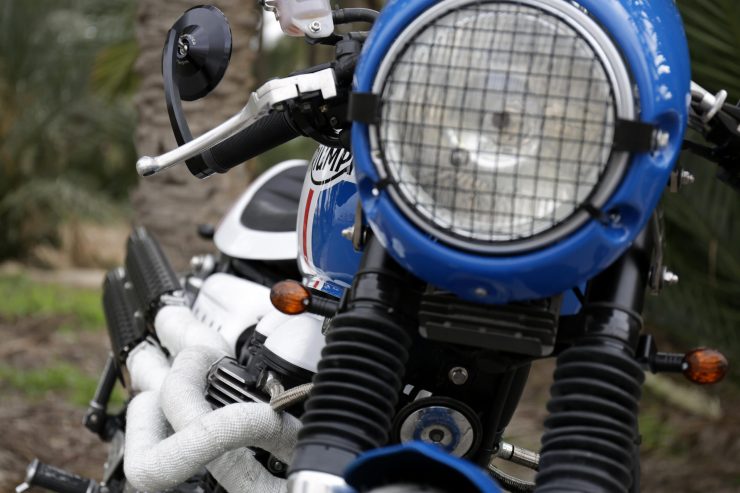 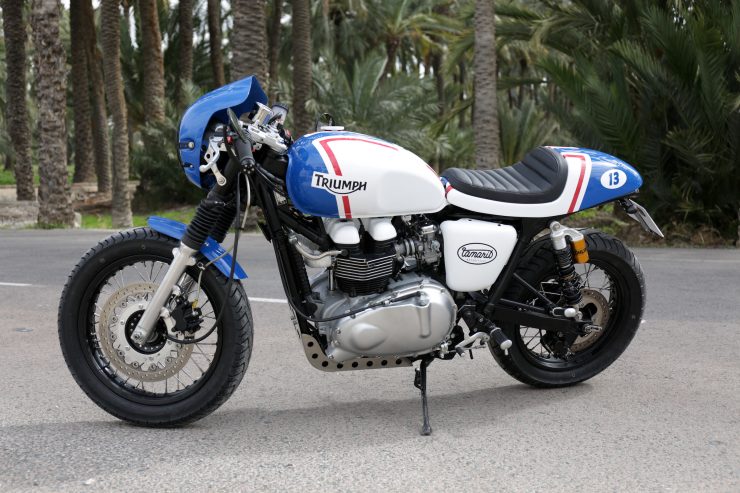 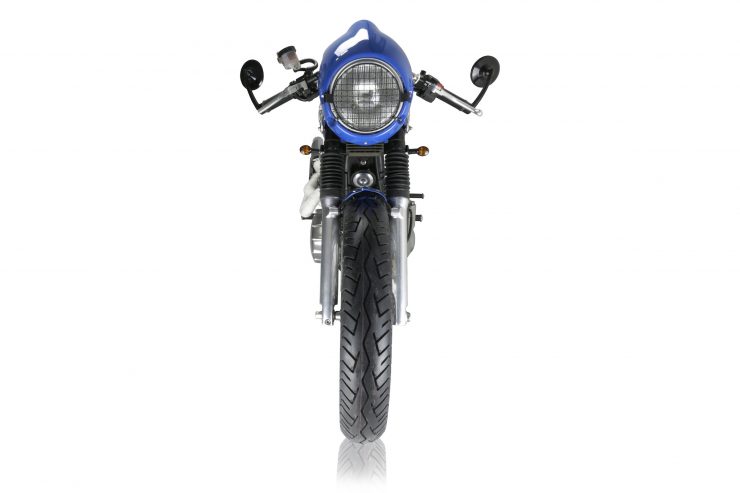 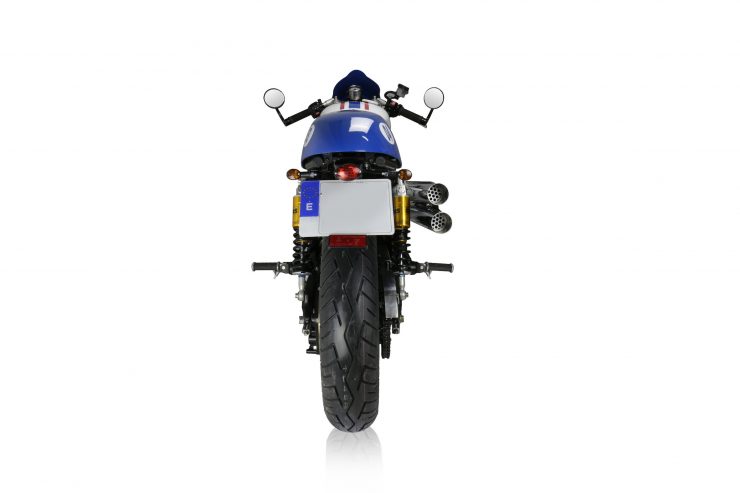 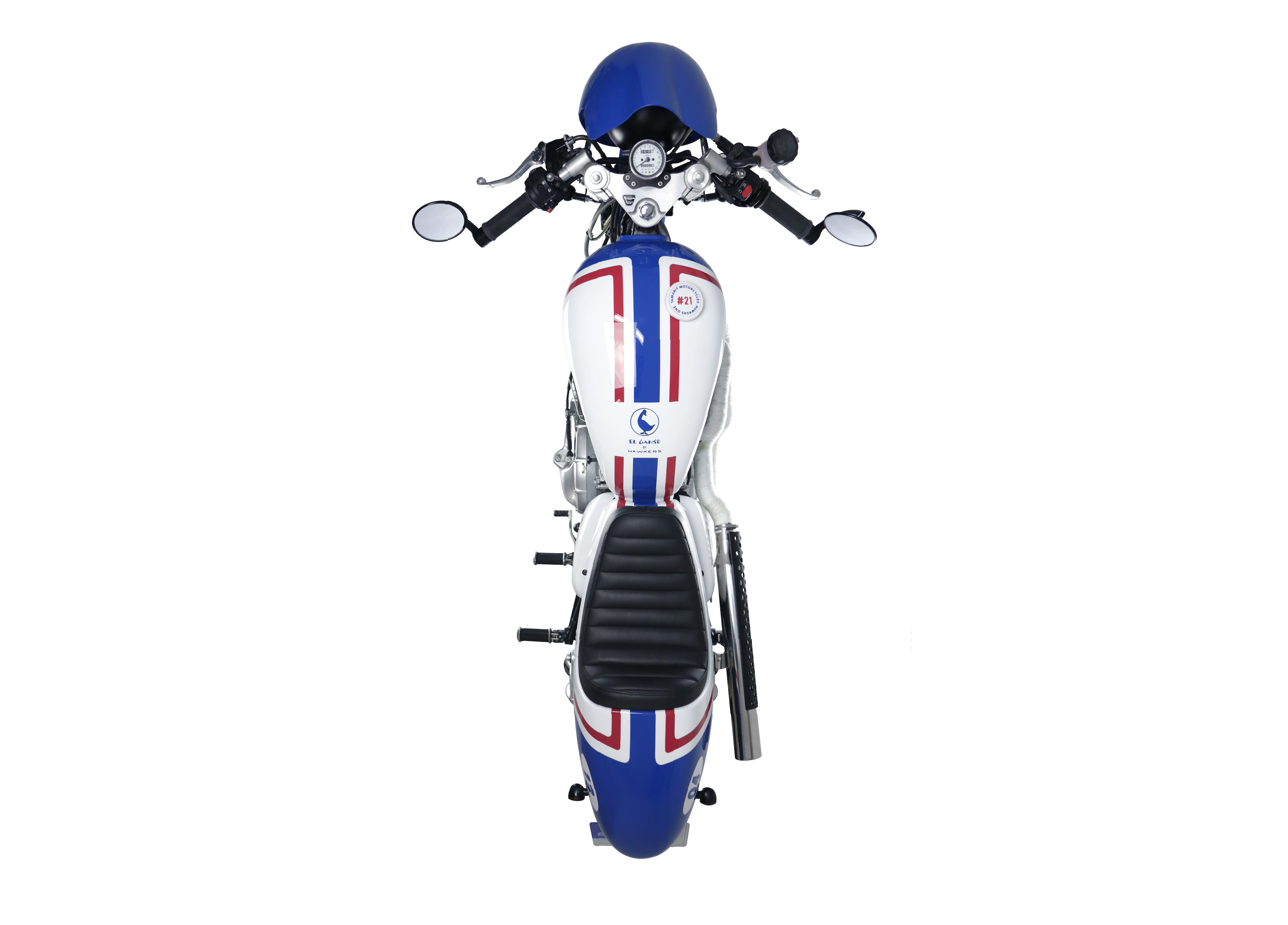