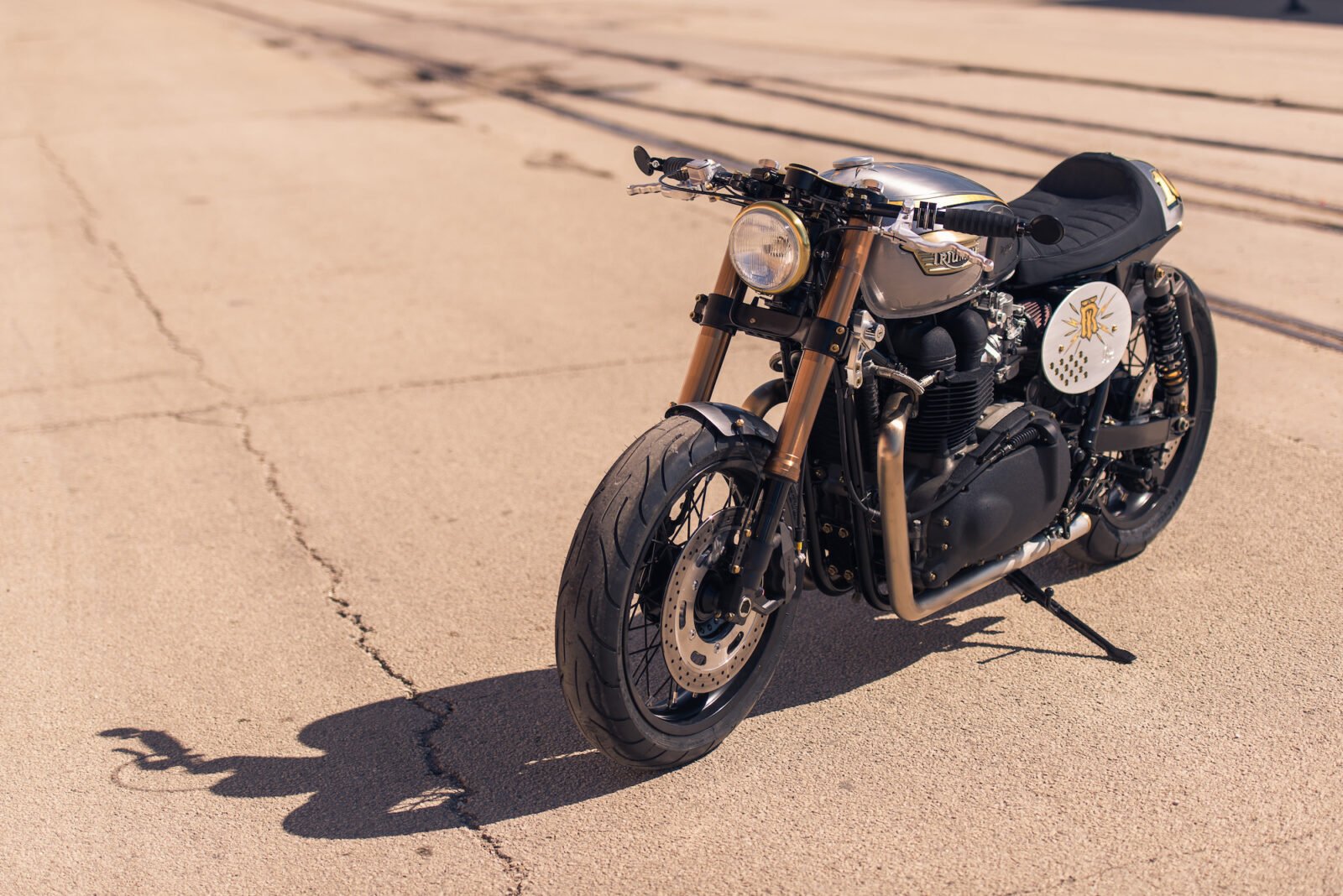 Editor’s Note: This article was written by Tony Prust of Analog Motorcycles. When possible we like to let garages tell the story of their work in their own words and cut out the middle man.

I built a 1972 Triumph Bonneville Bobber about 3-4 years ago I dubbed El Matador. It has been loved by many and received a ton of great press and feedback. It is actually my own personal bike that is still in my stable. I do not ever duplicate builds but when Rebel Yell Bourbon got a hold of me to build a custom bike for a new “Rebels Uncaged” promotion they were doing I figured it would be the perfect opportunity to do a new version of the beloved El Matador. So I did sort of an El Matador Sport or version 2.0.

I located a 2005 Bonneville in pretty good shape. It had some aftermarket stuff on it but I was planning on stripping it down so off it all went. I knew I wanted to do the raw metal and black theme with accents of brass. The new models have a lot more stuff on them than the stripped down bobber I had built before so I experimented with real brass and a powder coat brass I had use before on a build we did called “The Messenger”. The results are pretty cool with various hues of brass through out the bike giving a very organic and raw feel.

I also wanted to make the bike perform and handle better than stock and definitely better than my rigid bobber. After all with this Rebels Uncaged promotion comes the ride from the parent company Luxco’s headquarter in St. Louis, MO to Sturgis, SD this coming August. Myself along with 3 other builders will embark on a 4 day ride stopping at various cities along the way. Therefore this bike needed to be fun to ride and able to handle whatever may be thrown at it.

I swapped the front end with a Suzuki GSXR set of triples and forks and made the needed modifications to run the stock Triumph front hub and rotor. I laced both front and rear hubs to a new set of 17” rims with custom spokes from Buchanans. To finish the stance of the bike I had a custom set of G3-S shocks made by Race Tech. I wanted to utilize some of the parts we offer at Analog Motor Goods so put on a set of our number plate side covers we offer for the modern Triumphs but gave them some extra special custom treatment.

I also wanted to utilize the A3T (Analog Thruxton Tail Tidy) LED taillight assembly we offer but I trimmed about 4” off the stock Bonny sub-frame first. The idea was to show off what we make but in an even more tailored form. The Triumph aftermarket powerhouse British Customs carries some of our parts so I turned to them for a few more bits. We used the BC chain guard, billet clutch guard, lifter arm cover, tank knee pads and Drag Pipe exhaust system. I added the Low Brow Customs brass tips to match the bobber. I also had BC send me the CR carbs and we did a performance cam swap service they offer. The engine was torn down and wrinkle powder coated black. I milled out the sprocket cover to give more of the look like the original.

I then cut out a seat pan and hand formed a seat hump with a brass covered trunk. Perfect for a tool kit, gloves, bottle of water or maybe a flask of Rebel Yell ;-). While I was at it I made a steel front fender and fabricated some custom fender mounts. The dash has a custom CNC’d speedo bracket I had cut by Free Form Design to house a Moto Gadget Tiny Speedster speedometer. Also used Moto Gadget M-switch minis, M-blaze pins, and M-unit to tidy up all the electronics. I used one of the 4 piston calipers from the GSXR front end and paired with a set of Beringer controls this thing is ready to stop quickly whenever needed.

After everything was stripped and sanded to a brushed scotch bright finish I had Kiel’s Kustoms lay down a few coats of clear. Then called up the infamous Brando to stripe and leaf the tank, seat hump and number plates reminiscent of the original El Matador he did for me a few years back. We added the Rebel Yell logo and the number “10” for the single barrel 10 year they are launching this summer.

Over all I am super pleased with how El Matador 2.0 turned out. It has been one of the builds I have done recently that I was really looking forward to riding and it does not disappoint. The performance upgrades give it the power I was hoping for and the suspension upgrades give it the handling I am always wanting. Can’t wait to ride it across the country with my friends and fellow builders. Best part about the whole thing is some lucky winner will get to take this baby home when they give all these bikes away. 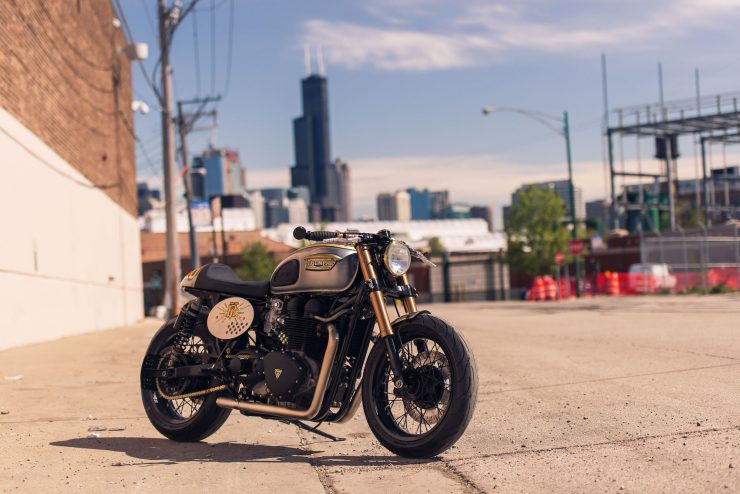 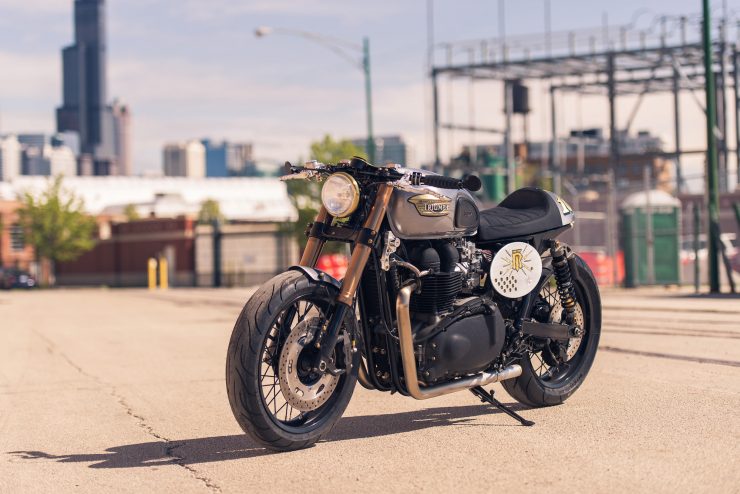 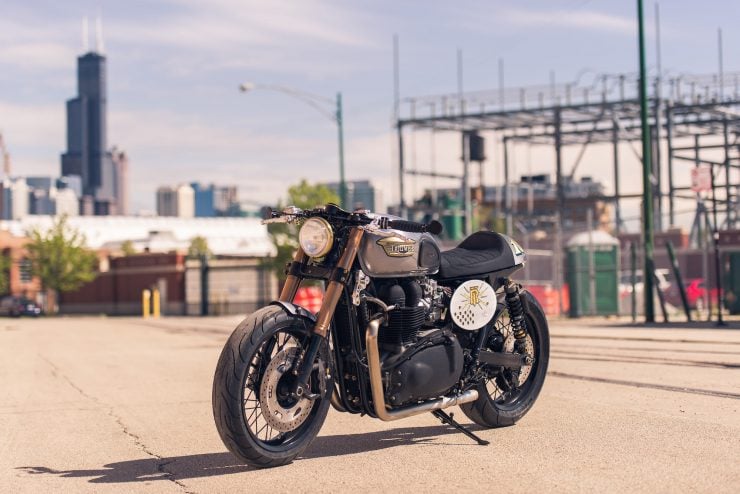 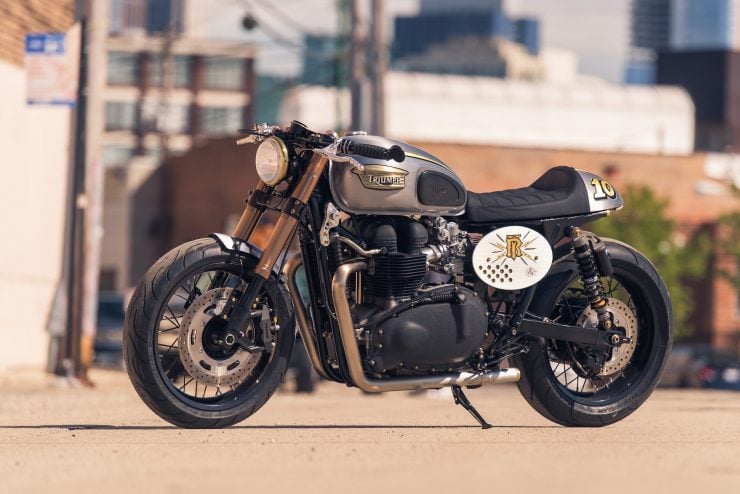 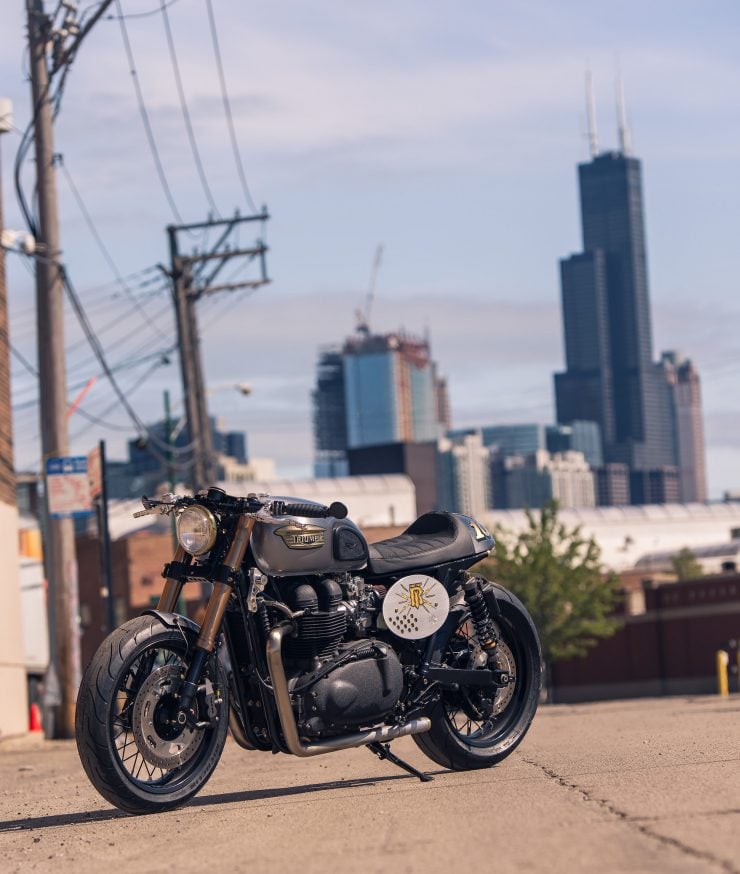 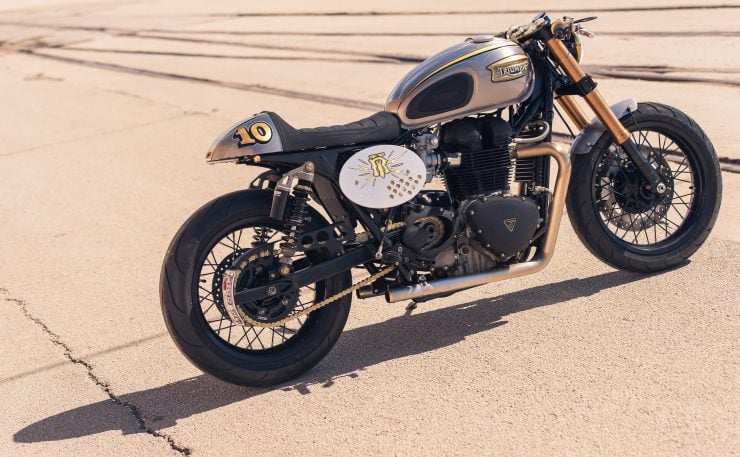 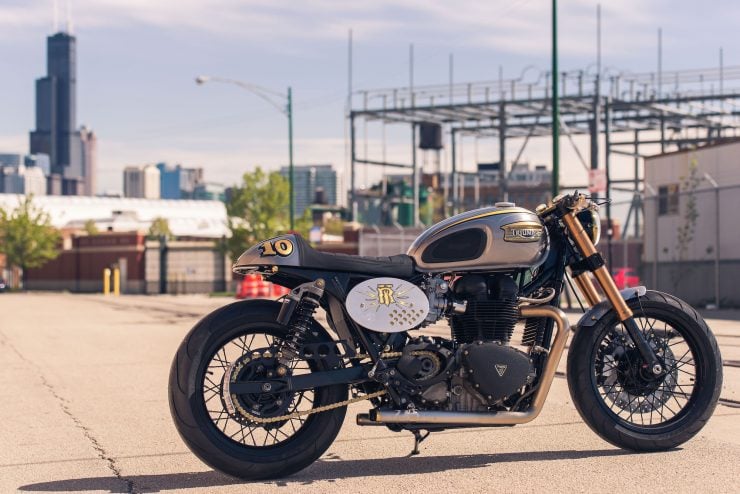 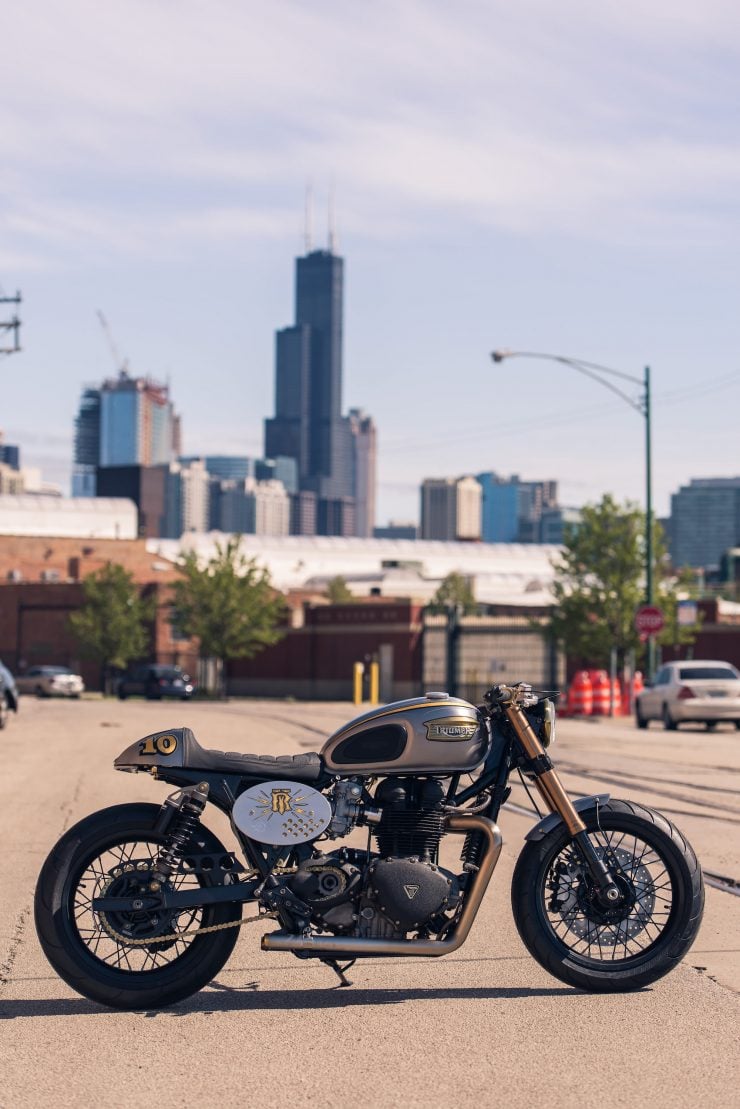 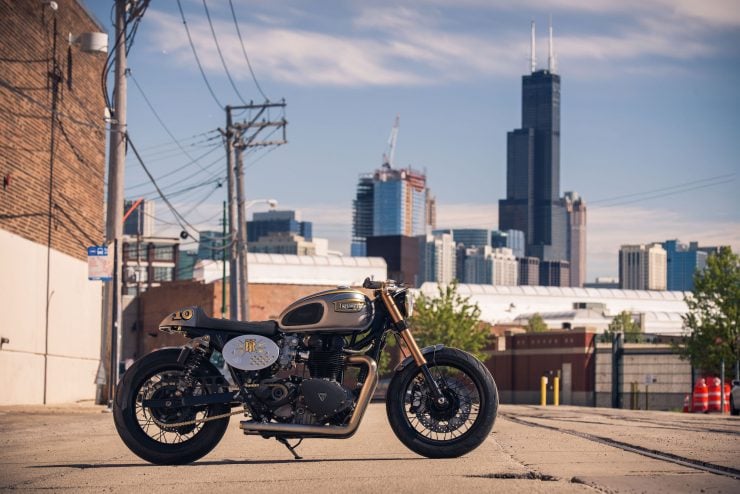 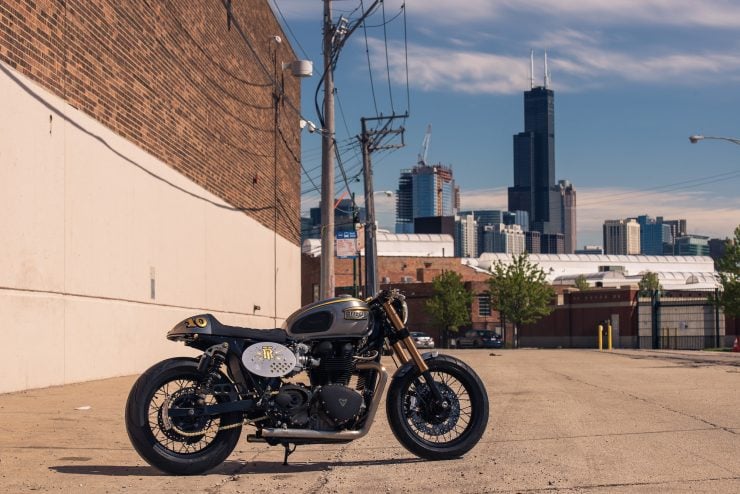 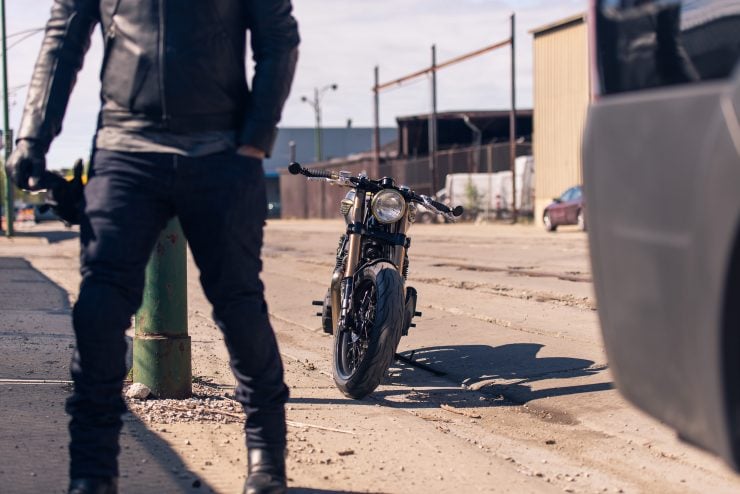 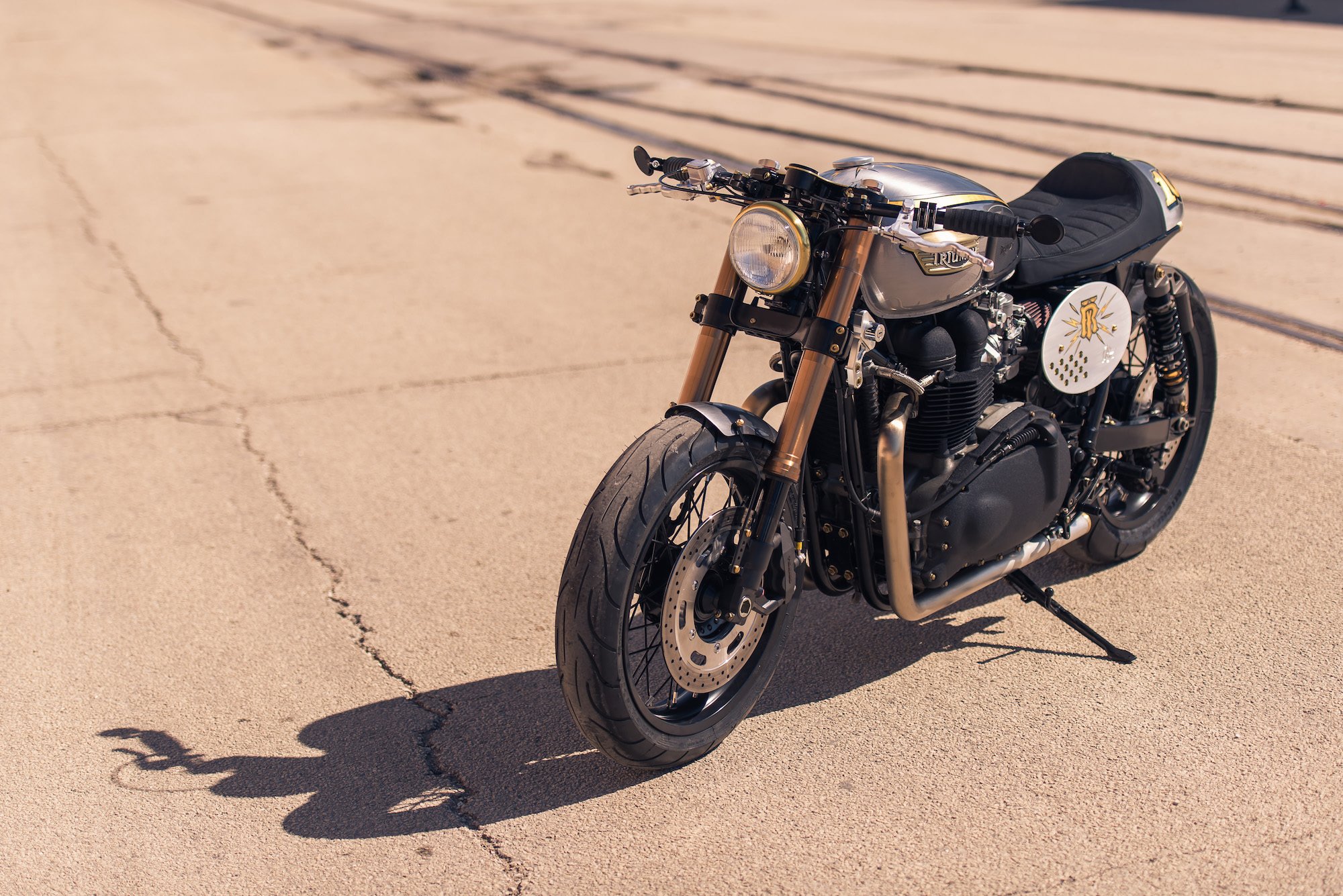