The unusual looking buggy you see here is historic two for reasons, firstly (the full scale version) was a prototype intended to replace the venerable Jeep, and secondly because the R/C version by Tamiya was the Japanese company’s first off-road buggy.

The reason why the folks at Tamiya choose this prototype as their first off-roader is interesting, and it’s possible that they took a gamble on this being the vehicle that was chosen to replace the Jeep – so they would have the brand new “Jeep” available as an R/C model.

The model is based on the FMC XR311, a prototype military vehicle that entered development in 1969. A number of development models were built and the military are known to have bought at least a dozen of them set up to perform various tasks.

The US military ordered a number of FMC XR311s for testing purposes and they could be configured to fulfill a multitude of roles including anti-tank, reconnaissance patrol, convoy escort, command and control, medivac, military police, mortar carrier, internal security and forward air defense communications vehicle.

Above Video: Footage of the Tamiya FMC XR311 being put through its paces.

The FMC XR311 likely had an influence on both the Lamborghini Cheetah and AM General’s HMMWV – better known as the Humvee and the vehicle that would eventually fill the role.

The XR311 had a rear-engine, four-wheel drive layout with power sent from the Chrysler V8 engine through a 3-speed TorqueFlite A727 automatic transmission and a single-speed full time transfer case.

These vehicles were tested extensively throughout the 1970s and they did look like a likely M151 Jeep replacement – likely enough that Tamiya created their model of it, the development of which likely started in the mid-1970s, before the FMC XR311 project was cancelled.

First released in 1977 the Tamiya FMC XR311 R/C is now largely unknown, and it’s certainly far less famous than the brand’s better-known off-roaders like the Tamiya Hornet. Tamiya recently brought the model back into full production for people who missed out the first time around. 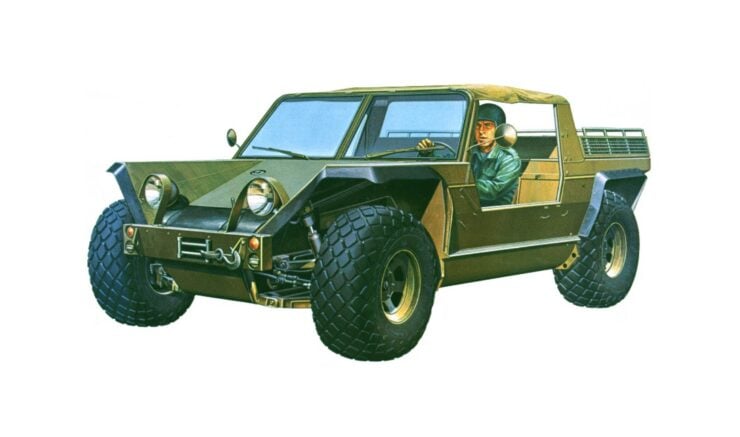 Above Image: An artist’s rendition of the original FMC XR311 vehicle.