Syd Mead’s work as a visual futurist is second to none, he is responsible for the stunning retro-futurescape of the film Bladerunner, not to mention Alien and Tron, he worked on Star Trek and was also responsible for the iconic Gundam series of Japanese robots.

These 2 designs are amongst my personal favourites from Mead, the car above is stunningly beautiful and I live in hope that one day, someone will actually build it. The futurescape below is reminiscent of much of Mead’s film work and is instantly recognisable even though it isn’t signed. Much of his skill lies in his ability to accurately capture reflections, take a close look at the different reflections across varied surfaces below, it’s just incredible. 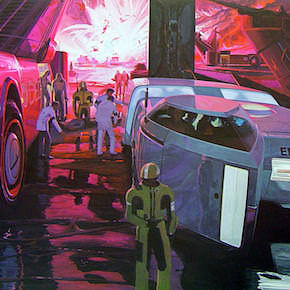