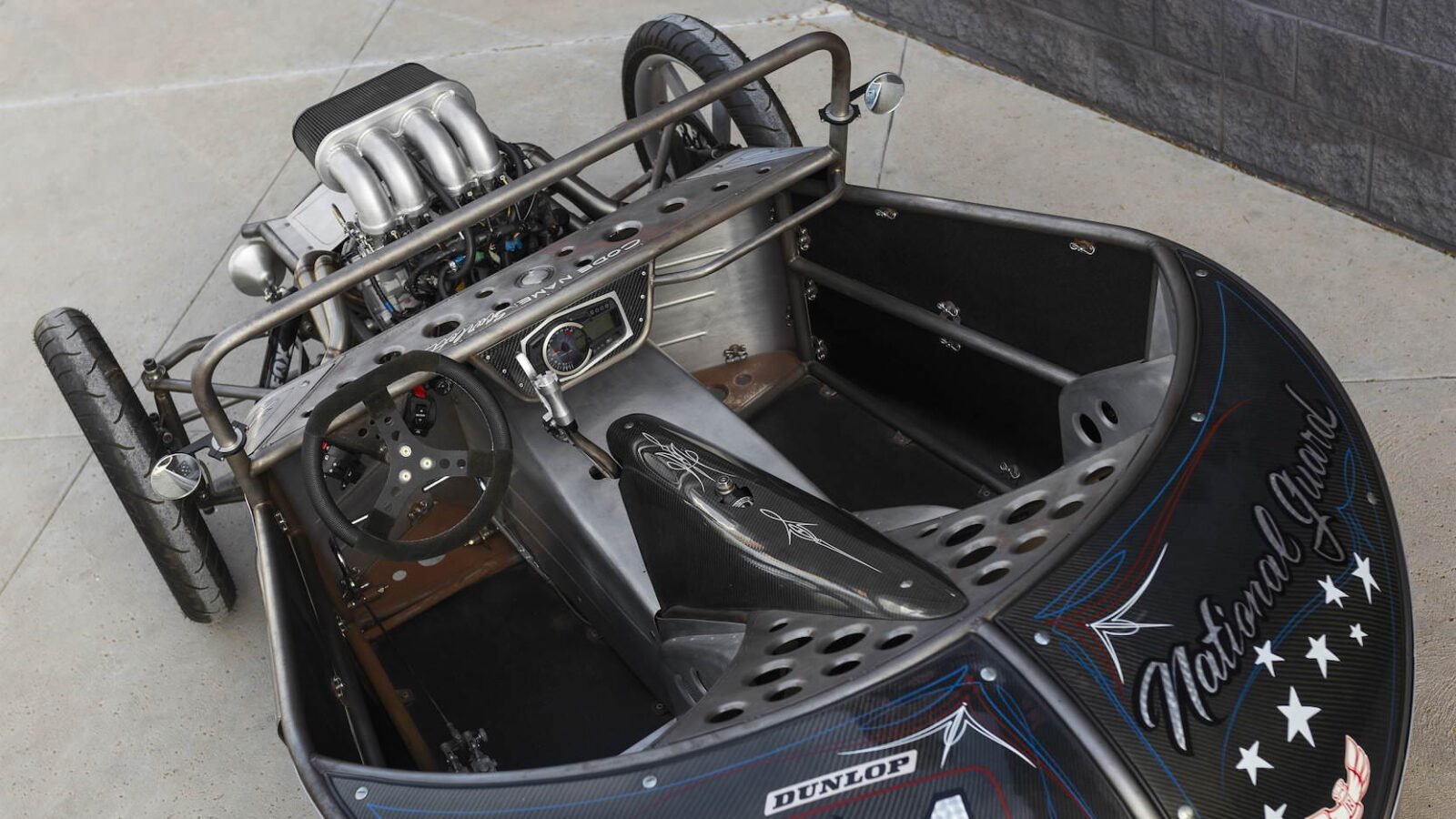 This Suzuki GSX-R 1000R powered 3-wheeler was built by the late motorcycle customization legend Jesse Rooke. It’s undoubtably one of the quickest and most fun to drive 3-wheelers on earth, and more than enough to give any Morgan 3-Wheeler a run for its money.

3-wheelers have always been a little unusual, they never really went mainstream but they have their own dedicated fan base who swear by them, and see nothing wrong with spending tens of thousands of dollars on a car with a wheel missing. Or a motorcycle with one wheel too many.

Jokes aside, 3-wheelers do have some advantages over their 4-wheeled brethren. Perhaps the most significant advantage is that in most countries you register your 3-wheeler as a motorcycle rather than as a car. This means you can bypass a huge swathe of red tape that regular cars must adhere to, admittedly you get a lot less in the way of crash safety, but you also get a much lower weight and a purer driving experience.

The most famous 3-wheelers are almost certainly those made by Morgan in England, their modern 3-wheelers have won the company legions of fans around the world and they’re currently developing a 100% electric model. There have been many other 3-wheeled vehicle manufacturers over the years but none have made it work quite as well as the folks at Morgan. 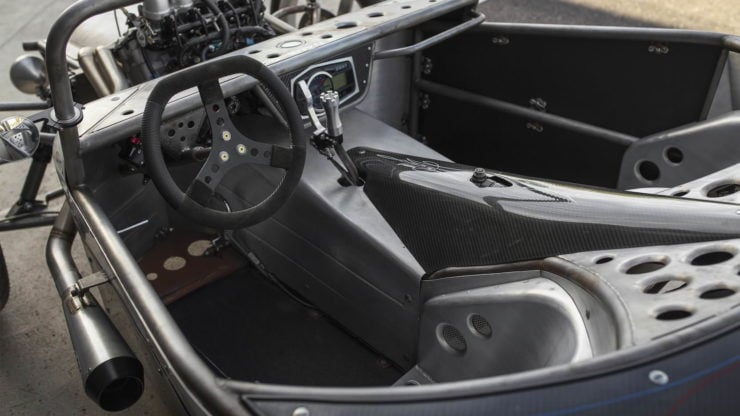 When Jesse Rooke set about building his own version of the 3-wheeler on behalf of the Jordan Suzuki Superbike Racing Team for the National Guard he took a hearty dose of inspiration from mid-20th century aircraft design, particularly warbirds. The racing team supplied him with a 2011 Suzuki GSX-R 1000R for the build, and they requested a sidecar set up, sometimes referred to as a “combination”.

Rooke decided to go in a slightly different direction. He set about developing plans for a proper 2-seat, 3-wheeler with the 999cc, 161 bhp Suzuki GSX-R 1000R engine mounted up front. Working closely with his brother James, working at Foddrill Fabrications, the tubular space frame was fabricated, then fitted with aluminium and carbon fibre panels.

The engine is installed up front in the same orientation as it’s fitted to the original bike, this 3-wheeler keeps the original gearbox, swingarm, and rear wheel as the donor bike for the sake of simplicity, including the rear disc brake.

The entire front end is built from scratch, it uses bespoke unequal length double A-arms bolted to a front subframe. The wheels are custom aluminium alloy units that are reminiscent of the wheels used on early Bugattis, and the radiator is mounted up front behind a custom grille. Disc brakes are used on each of the front wheels, and the engine is capped with a prominent intake manifold with a large forward facing air filter. 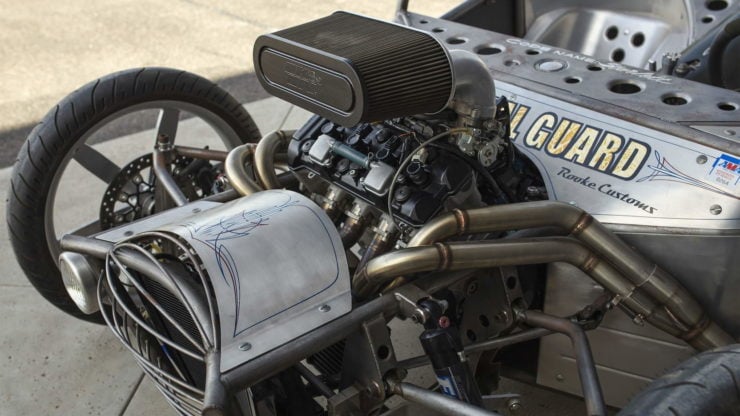 A pair of custom headers was fabricated, with two two-into-one units – one exits on each side into its own silencer. The sequential shifter exits the body into the traditional centre cockpit position, it’s fitted with a Rook chessboard piece milled from alloy and it uses the Suzuki’s original’s clutch lever.

Once it was completed and delivered the 3-wheeler was used extensively by the National Guard at promotional events around the country. As it can carry two adults it proved ideal for giving joy rides to show attendees and dignitaries, and rumour has it that if you were high enough up within the National Guard you could get behind the wheel yourself.

The Jesse Rooke 3-Wheeler is now coming up for public sale for the first time from his estate, tragically he was killed in a motorcycle accident in April 2019 leaving behind his partner Ashley Blair and their daughter Scarlett. If you’d like to read more about this unusual vehicle or register to bid you can click here to visit the listing, if you’d like to read more about Jesse you can click here. 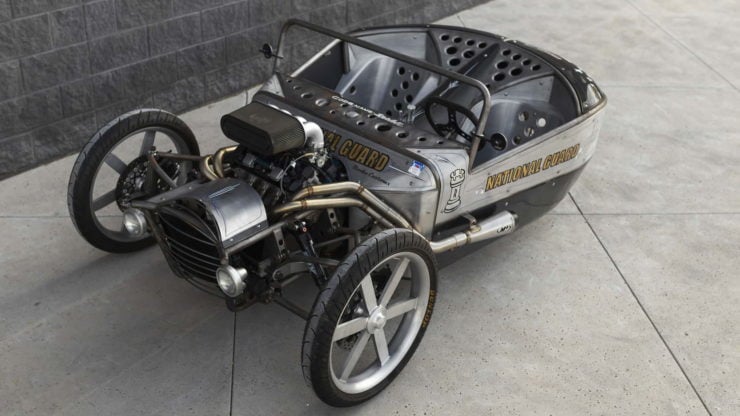 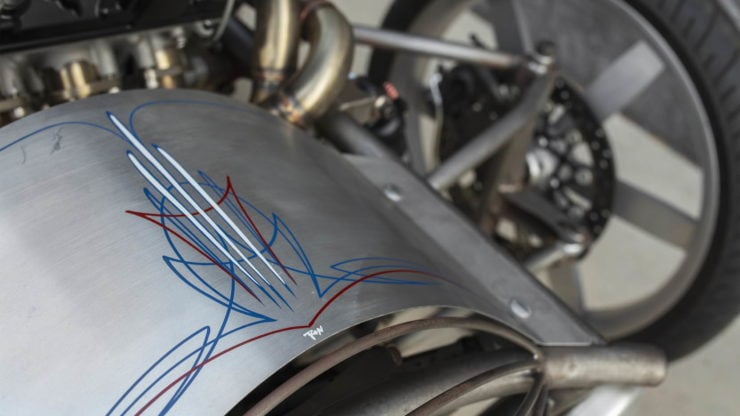 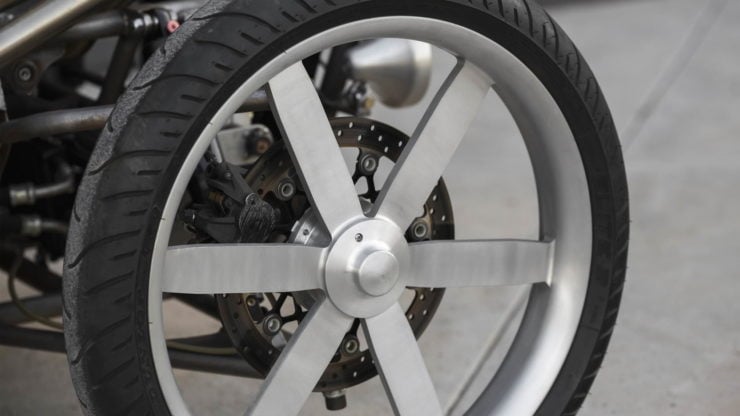 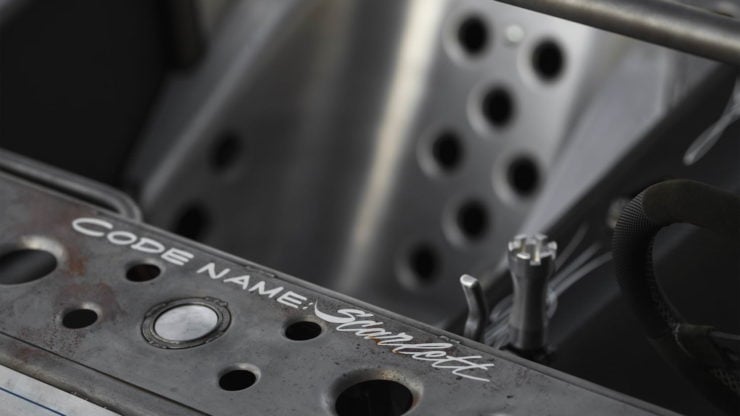 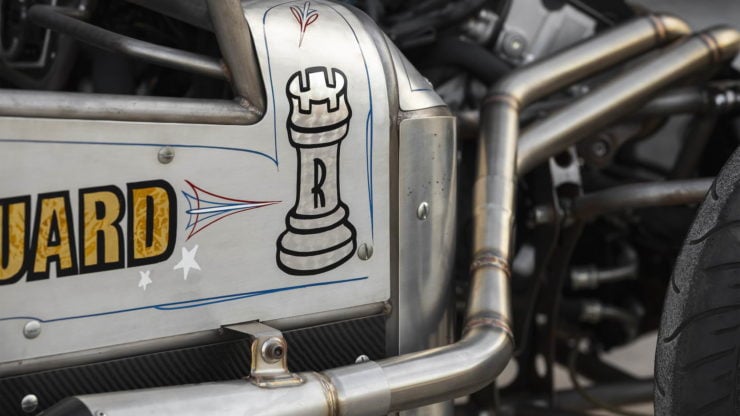 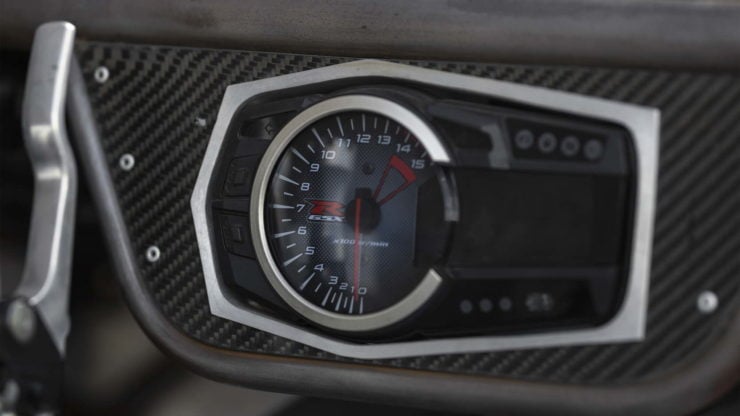 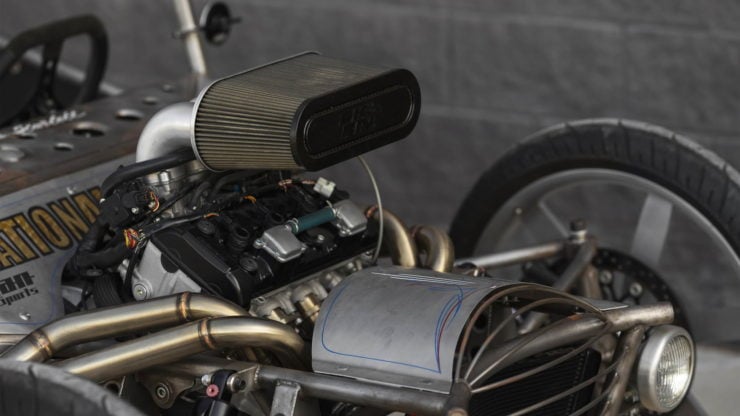 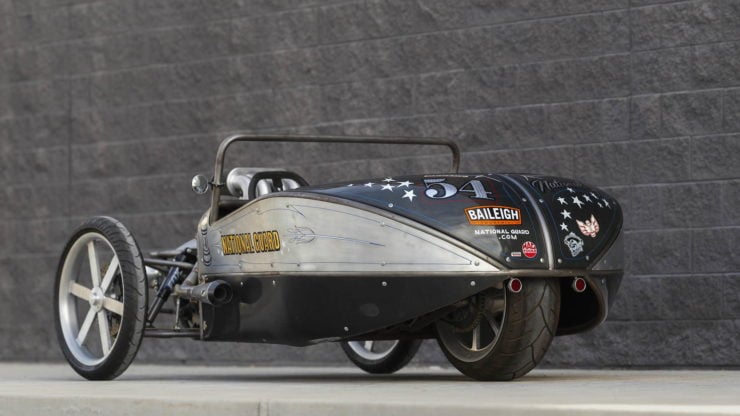 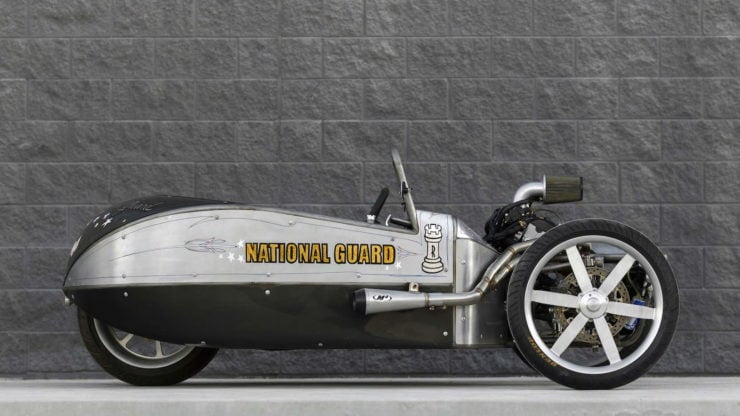 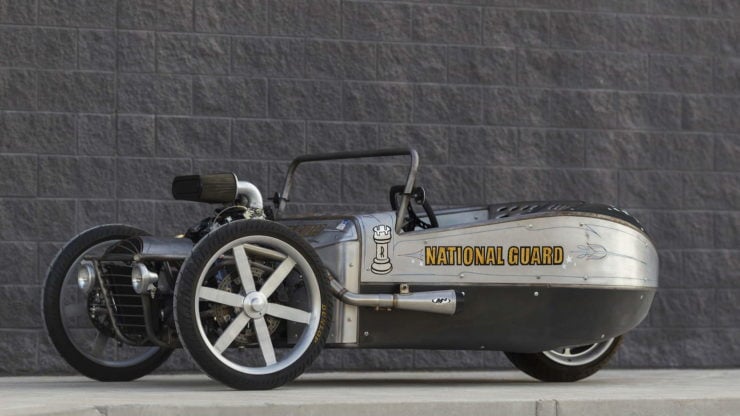 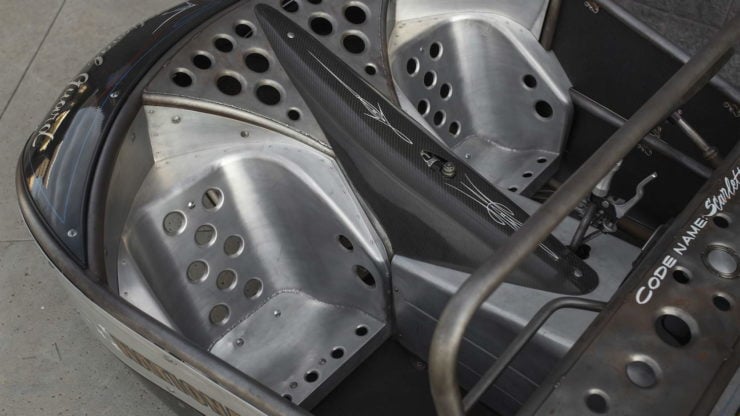 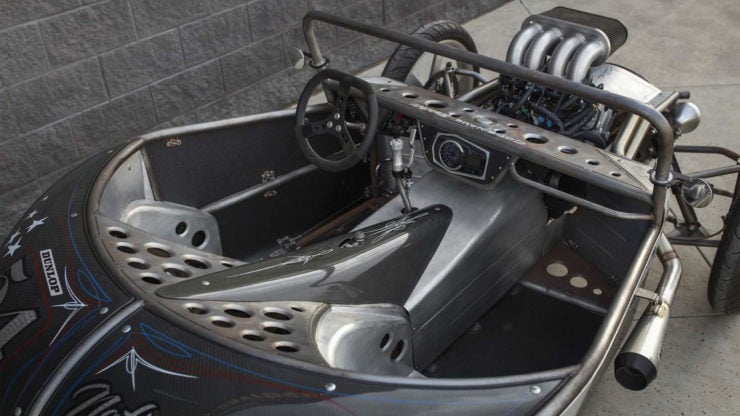 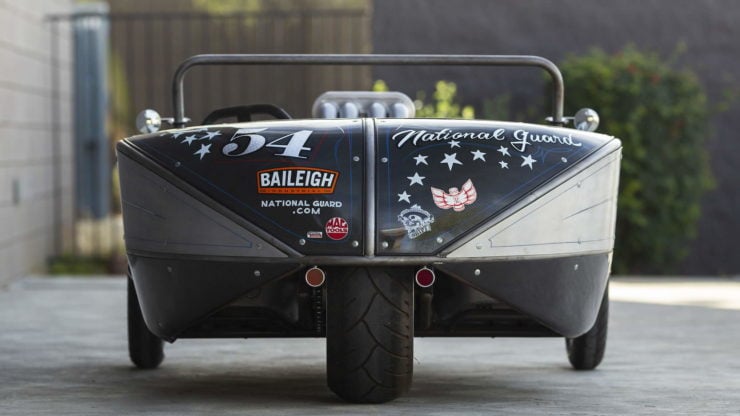 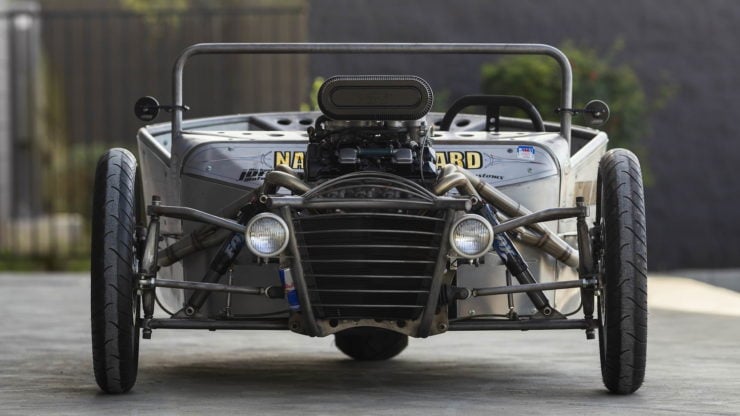 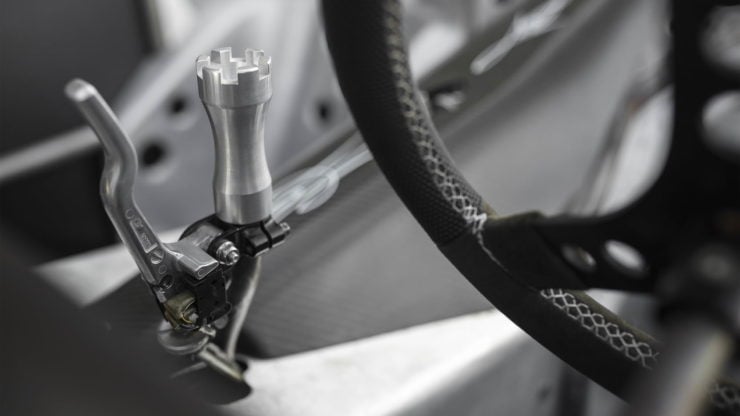 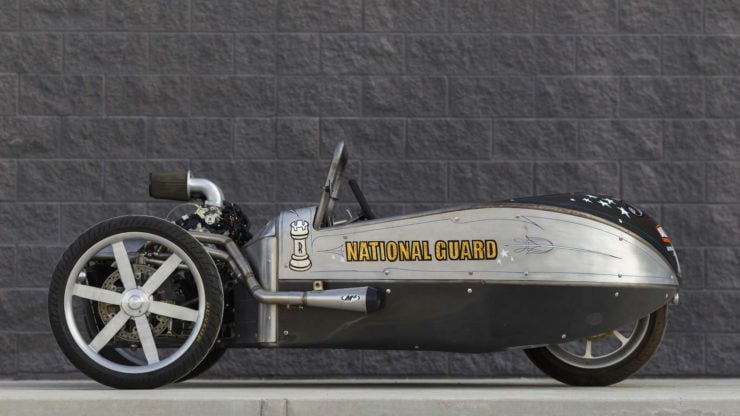 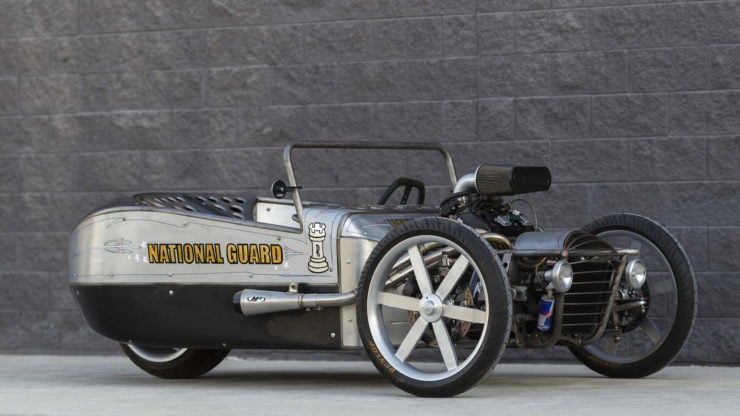 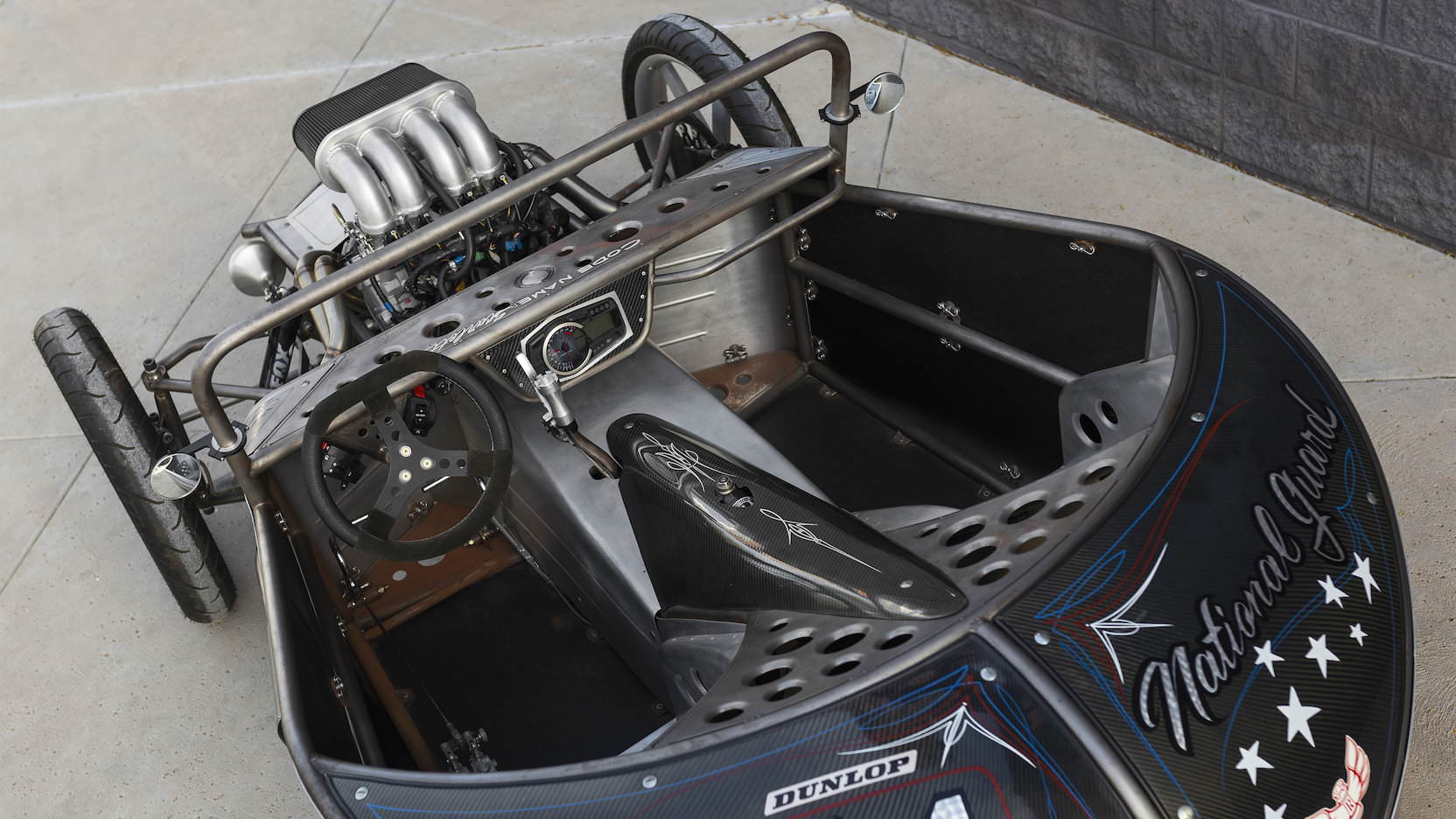