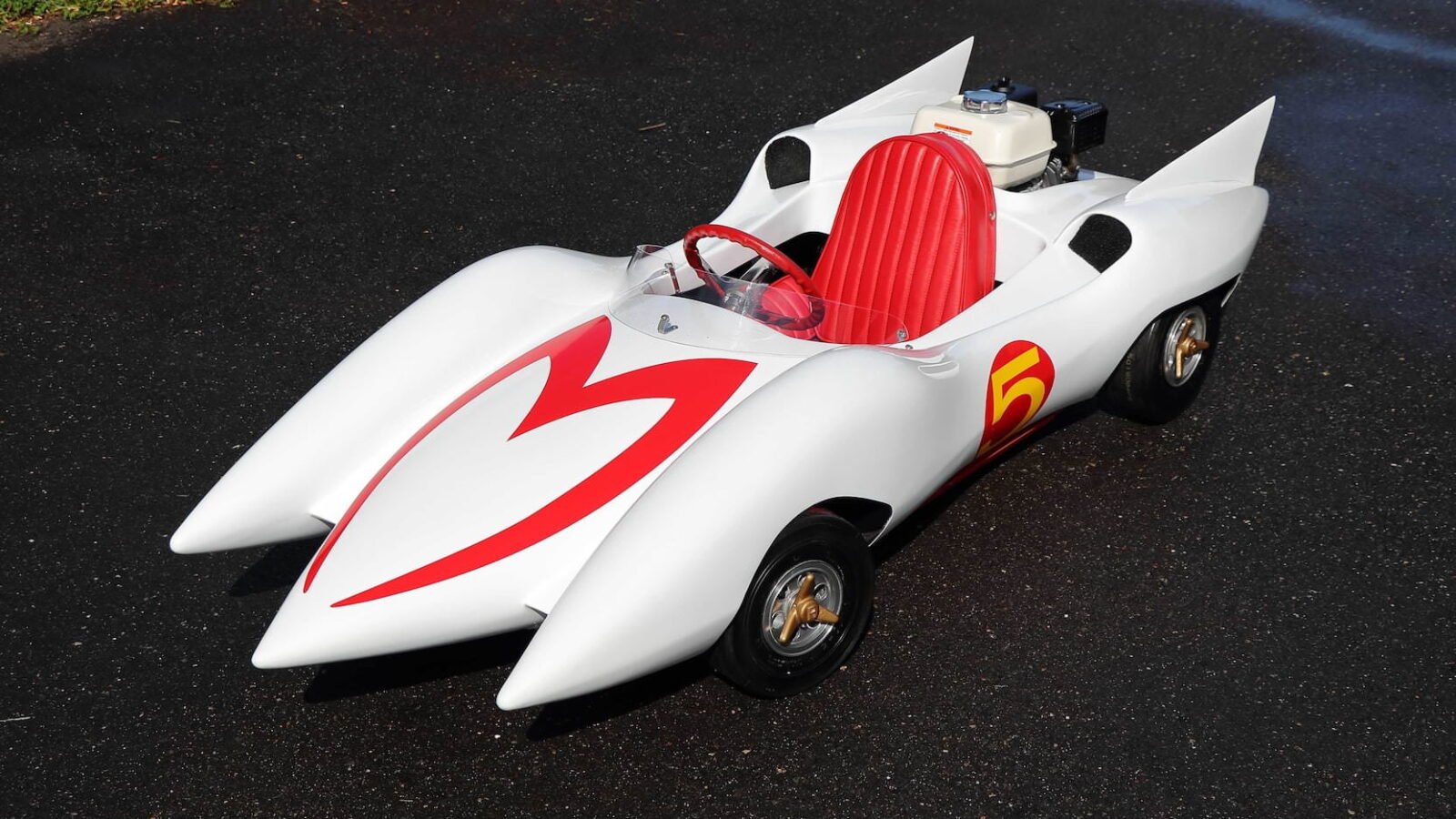 If you’ve ever wanted your own fully drivable Speed Racer Mach 5 you may very well be in luck, as this example is coming up for sale with an estimated price tag of just $12,500 to $15,000 USD.

The bad news is that it’s not life size or road legal, this is a very limited edition Speed Racer Mach 5 go-kart that was painstakingly built over the course of a year with just two others in existence.

The Mach 5 is a car that needs no introduction, it was created by anime pioneer Tatsuo Yoshida as a manga series in the 1960s before being turned into an anime series. The anime series would be dubbed in countless languages and spread around the world, becoming one of the most successful Japanese media exports of the era. 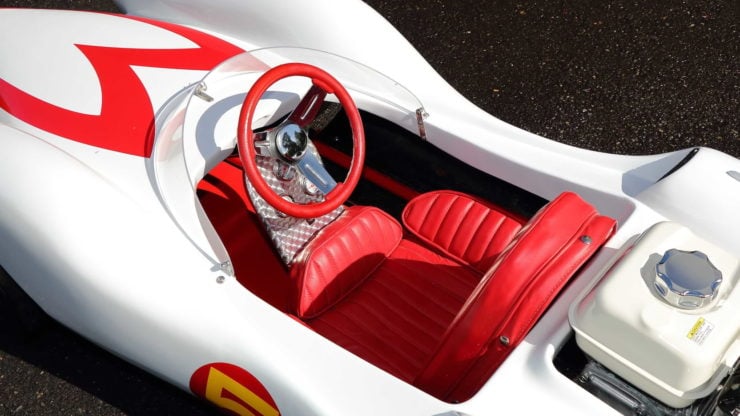 Interestingly, Yoshida is said to have created the Mach 5 car based on two films he’d recently seen: Viva Las Vegas and Goldfinger. He took Elvis Presley’s racing driver image right down to the neckerchief and black pompadour, and he took the concept of the built-in vehicle gadgets from the James Bond film.

In its original Japanese the TV series was called Mach GoGoGo (マッハGoGoGo in Japanese), the car was called “Go Mifune” and interestingly the large “M” on the hood and doors is for “Mifune” and not “Mach” as many believe.

Although the original anime (animated) TV series only ran for 52 episodes from 1967 to 1968, the show has become legendary. There have been TV series continuations and films made, not to mention more manga books. Many young people grew up watching Speed Racer, and for some (like me) it proved to be one of the catalysts that would turn them into life-long car fanatics.

This Speed Racer Mach 5 go-kart was built using a standard tubular steel frame go-kart chassis with a rear mounted engine, drum brakes, rear wheel drive, and no suspension other than the tire side walls. A meticulously re-created Mach 5 body was moulded from fibreglass at 3/8ths of an inch thickness, and it features the correct exterior decals. 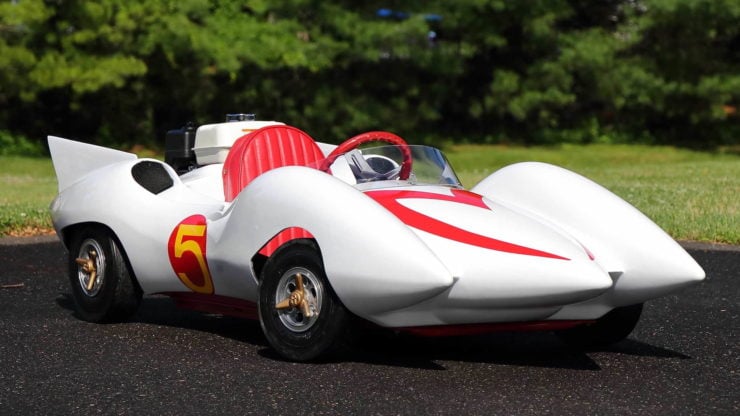 Fittingly, it’s powered by a Japanese engine, a Honda GSX120 with a capacity of 118cc and 3.5 hp at 3,600 rpm. The GSX120 is a commonly used industrial engine known for its reliability and low maintenance requirements, it weighs just 29 lbs (13 kgs) and it’s an air-cooled, four-stroke design with two overhead valves and a single cylinder.

Inside you’ll find red leather upholstery including a seat that can accommodate either children or most adults. The engine is started with a hand pull and there are just two pedals – gas and brake.

A correct steering wheel was made and fitted, and there’s a style-correct instrument cluster too however it’s for display only. A one-piece Lexan windshield wraps around the front of the cockpit, and the engine sits up through a hole in the rear bodywork to aid in cooling.

When building the car a helmet and race suit were also created, and they both accompany the car now. It’s all due to roll across the auction block with Mecum in mid-August with an estimated hammer price of $15,000 USD or less, and if you’d like to read about it or register to bid you can click here. 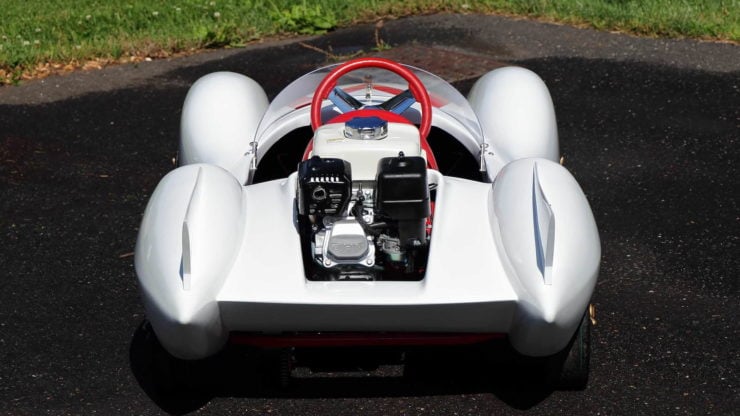 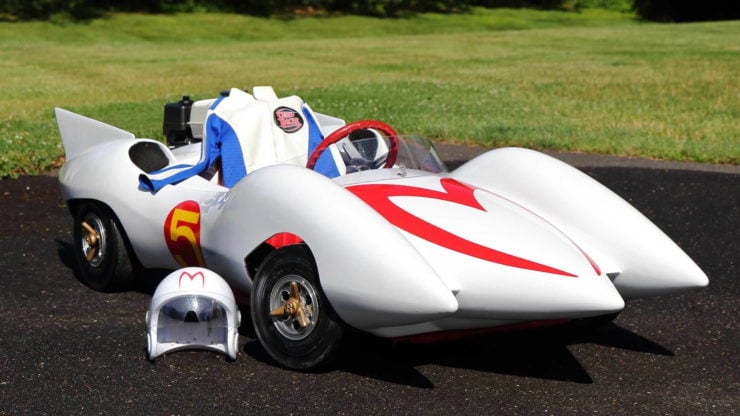 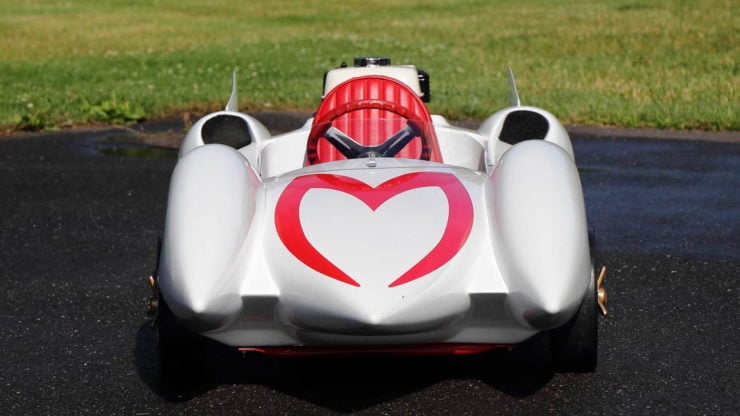 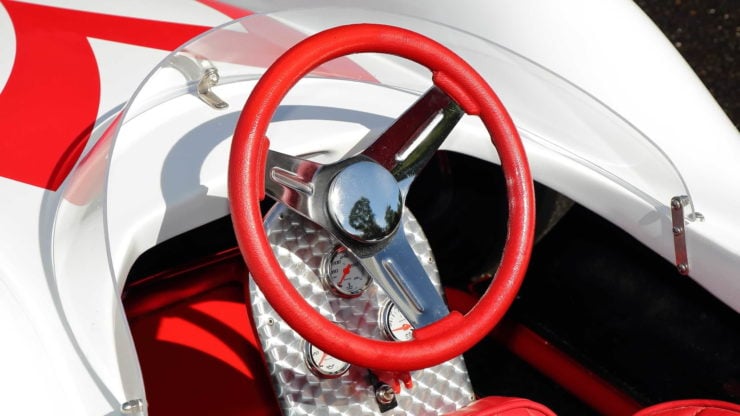 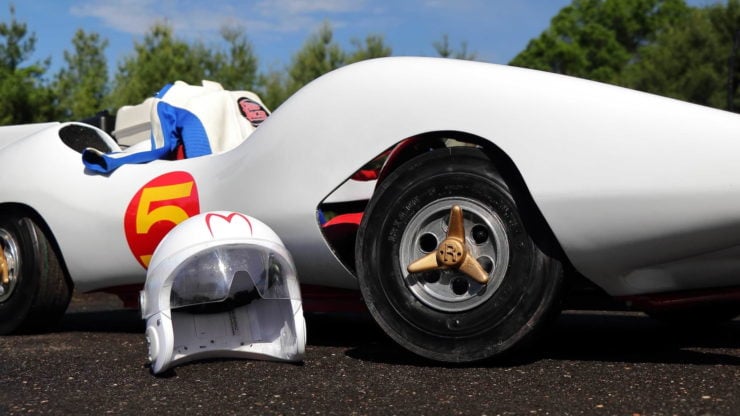 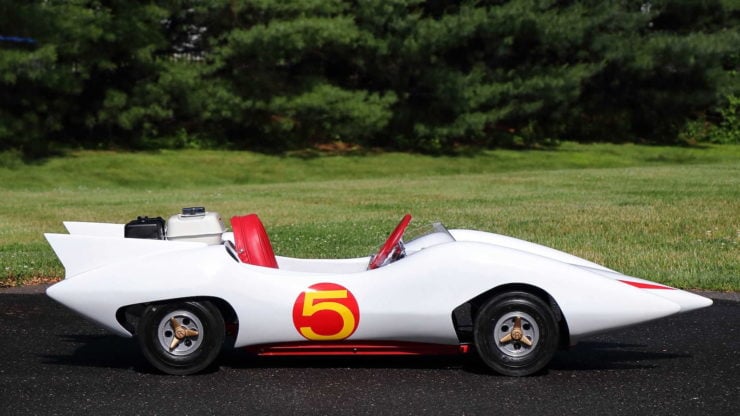 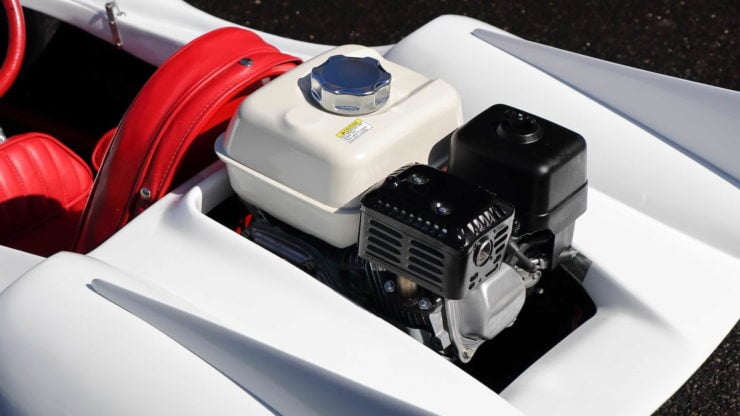 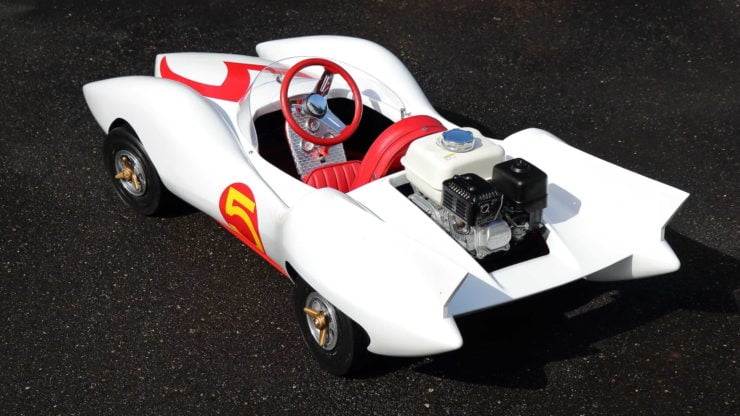 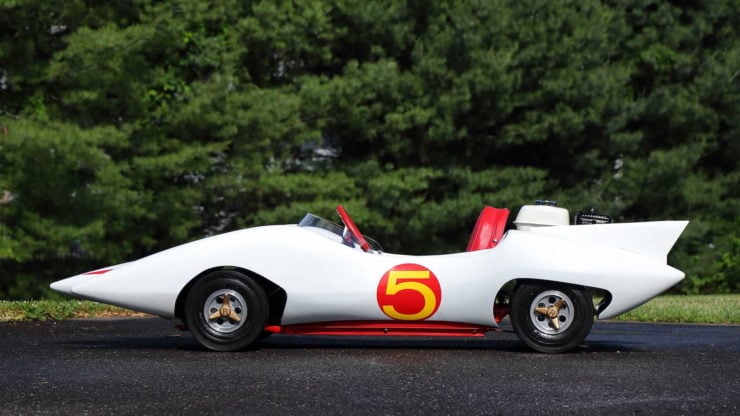 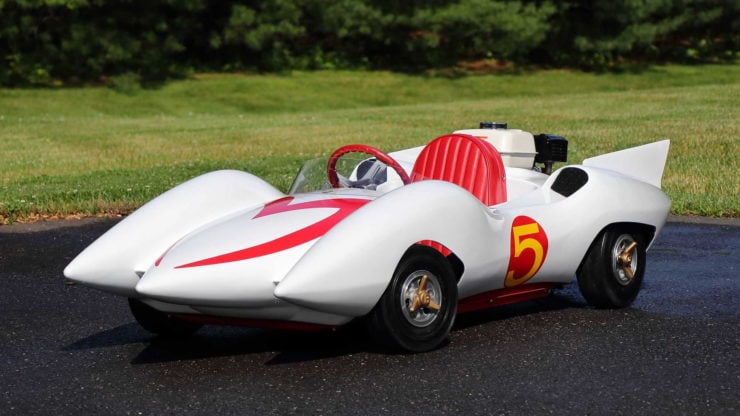 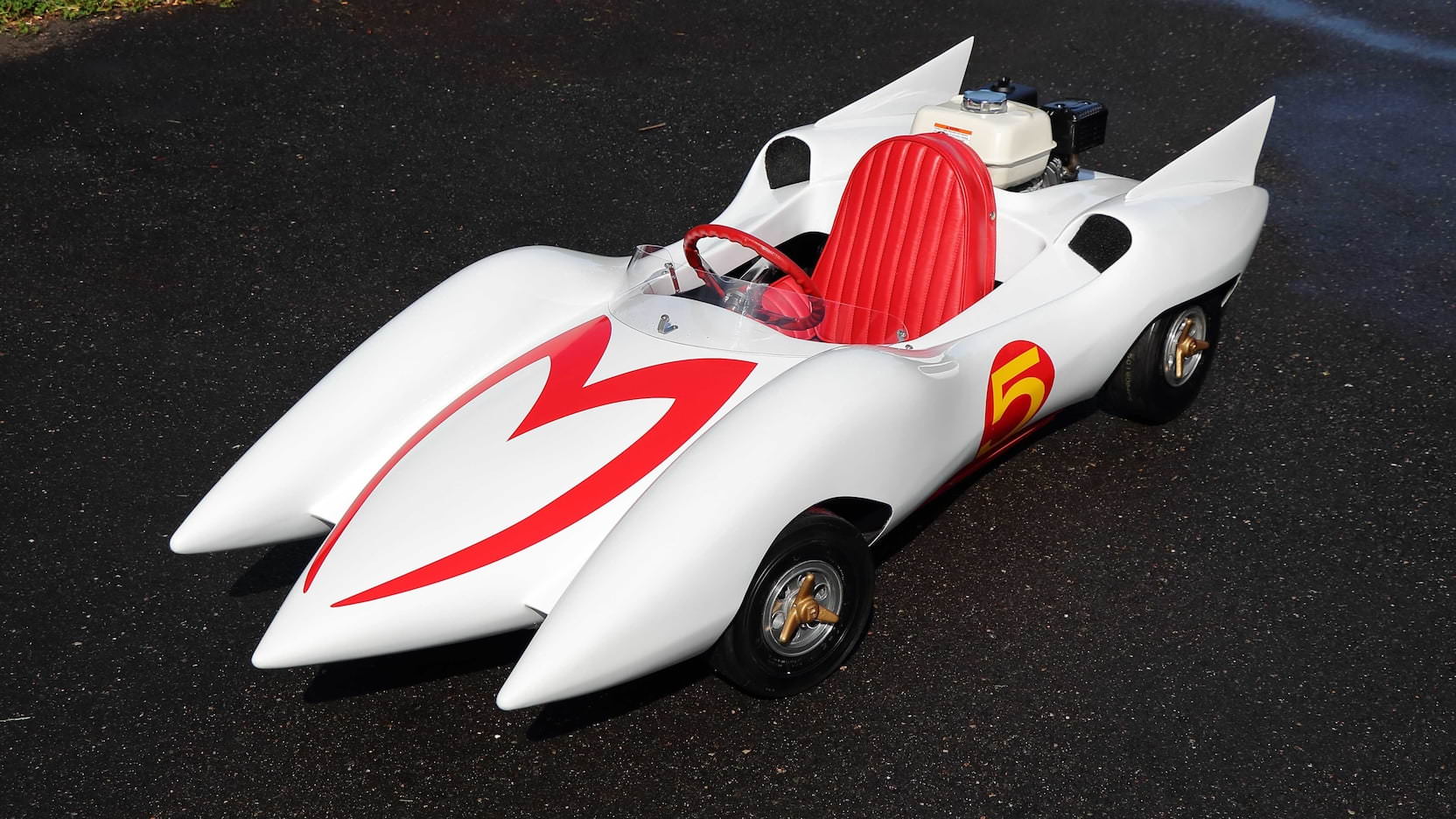