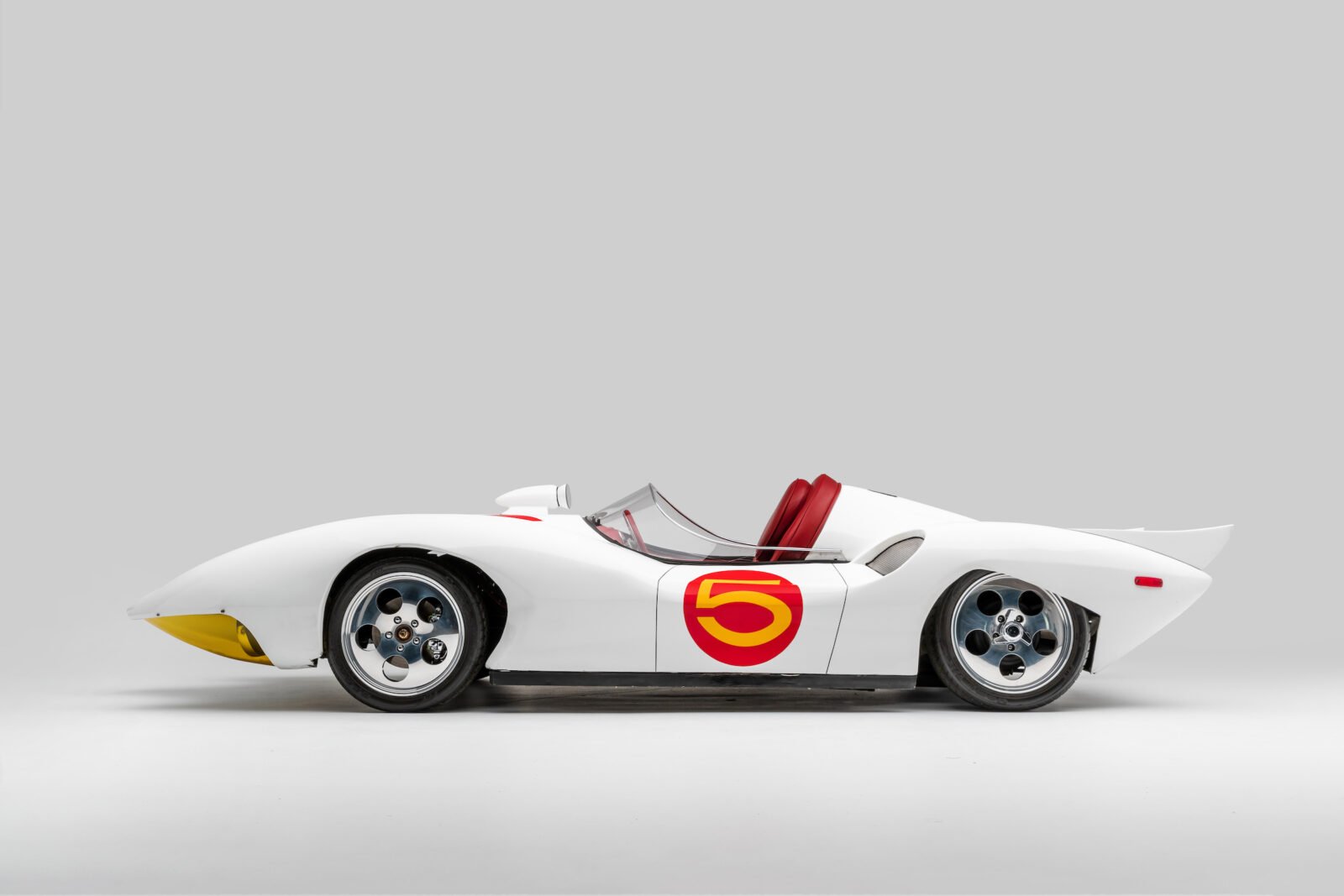 This is the real-life Mach 5 from the 2008 Wachowski film Speed Racer, based on the manga and anime series that was created by Tatsuo Yoshida back in the mid-1960s.

The Mach 5 needs no introduction to anyone who grew up in the ’60s, ’70s, or ’80s. Speed Racer was dubbed into English and countless other languages, it provided a staple of the viewing diet of many children (including me and probably you too), making it one of the first Japanese series to see widespread adoption in the west.

The anime version of the Mach 5 was said to have 5,000 horsepower which was distributed equally to each wheel via auxiliary engines, making it an early example of an all wheel drive racing car. An interesting premonition given the enormous success of AWD racing cars, particularly in Group B and the WRC, in the decades that followed. 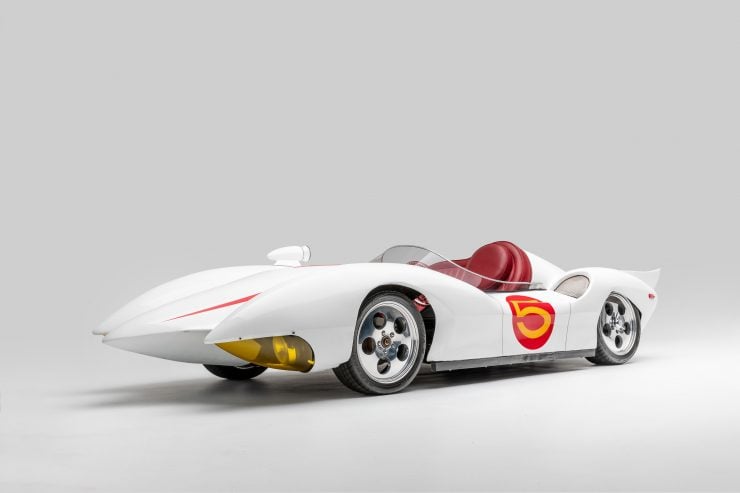 On the steering wheel there are 7 buttons that operate 7 unique functions, all built into the car by
Pops Racer.

Function #A: Hydraulic auto jacks that can lift the car for mechanical repairs, and also launch it into the air when racing for overhead overtakes on the race track.

Function #B: Belt tires that sprout special grip, offering excellent traction on all surfaces including asphalt, ice, vertical mountain sides, and even the ocean floor.

Function #C: Cutting blades that protrude from the front of the car, cutting down trees and other obstacles.

Function #D: A powerful deflector that seals the cockpit. It’s waterproof, bulletproof, and air-conditioned, and it filters outside air to protect against sleeping gas.

Function #F: This is an underwater capability, with a supply of oxygen for the cockpit and a periscope rising above the surface of the water.

Function G: In this case “G” stands for “Gizmo”, a homing pigeon robot that was a prescient prediction of modern drones. The pigeon can be used to send messages and small items to allies.

So far as it’s possible to tell this Mach 5 was the only one built for the 2008 Wachowski film, many of the other cars in the film were never actually built in real life, with the production taking place entirely in CGI.

Although there appears to be a replica gearbox extending under the rear of the car, this Mach 5 has no engine at all. It’s constructed from fibreglass over a steel frame with functional steering and the ability to roll forwards and backwards.

Inside the passenger compartment you’ll find the characteristic red seats and red trimmed steering wheel with its famous 7 buttons. There’s a shifter in the centre, and some gauges and switches.

The low-slung headlights peer out through yellow Perspex shields, and the large polished alloy wheels frame each corner of the car. The windshield swoops around the side and front of the cockpit, there’s a right-side rear vision mirror, air intakes in the front of the rear wheel arches, and and the signature hump behind the driver.

If you’d like to see the Mach 5 in person you’re in luck, it’s one of the headliners of a new show at the Petersen Automotive Museum in LA. The show is called “Hollywood Dream Machines” and it opens on the 5th of May. If you’d like to read more or get tickets you can click here. 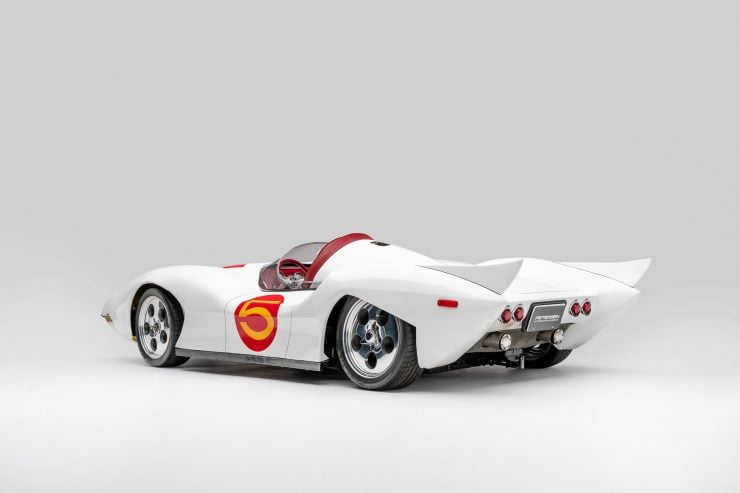 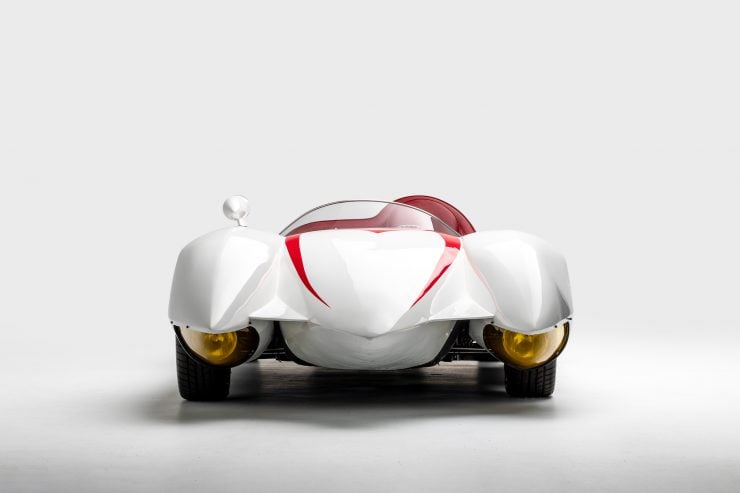 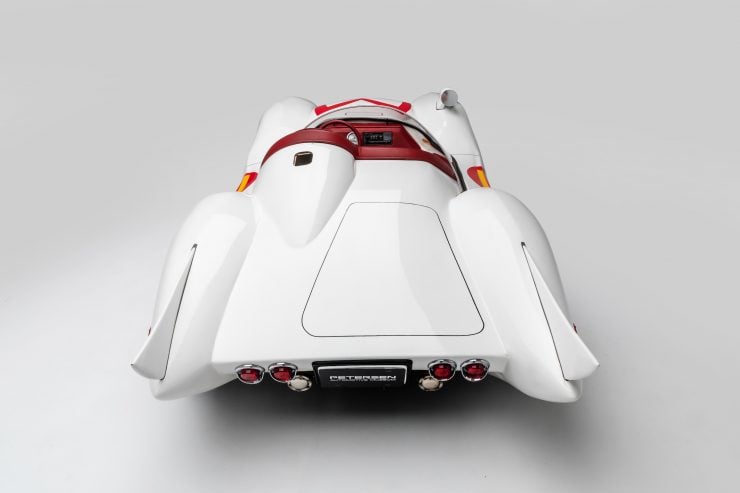 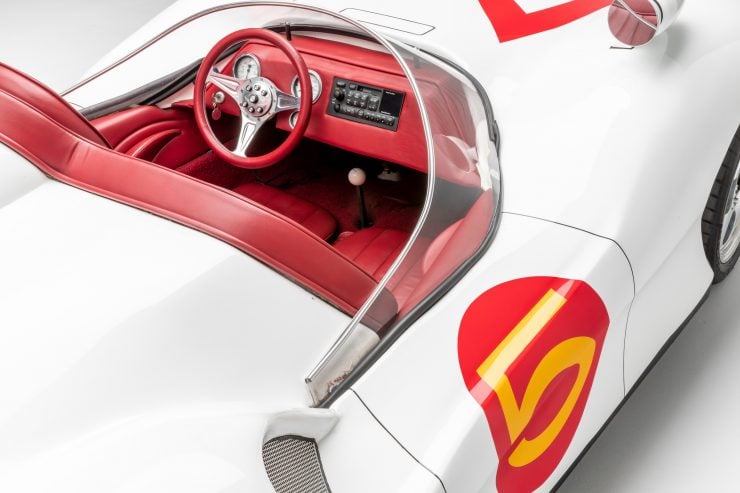 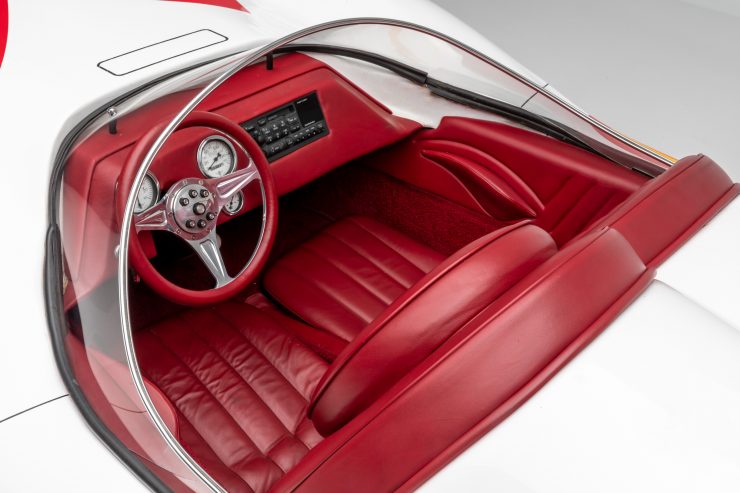 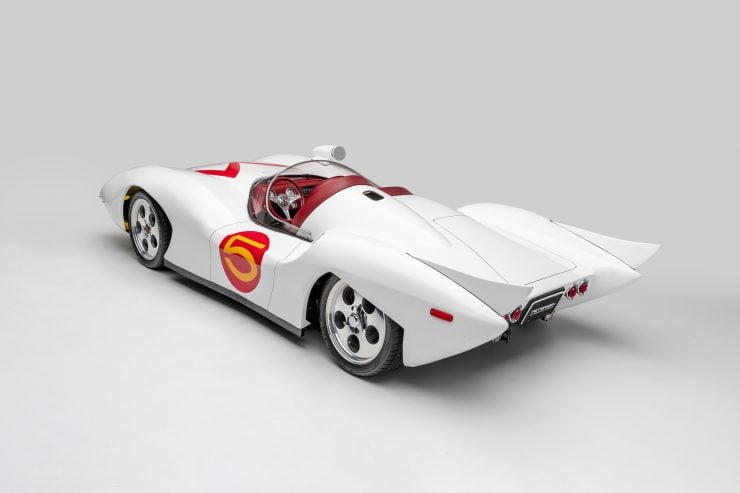 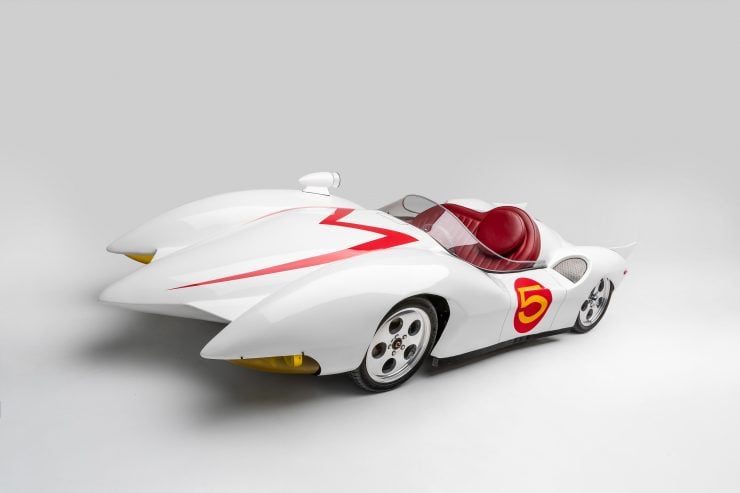 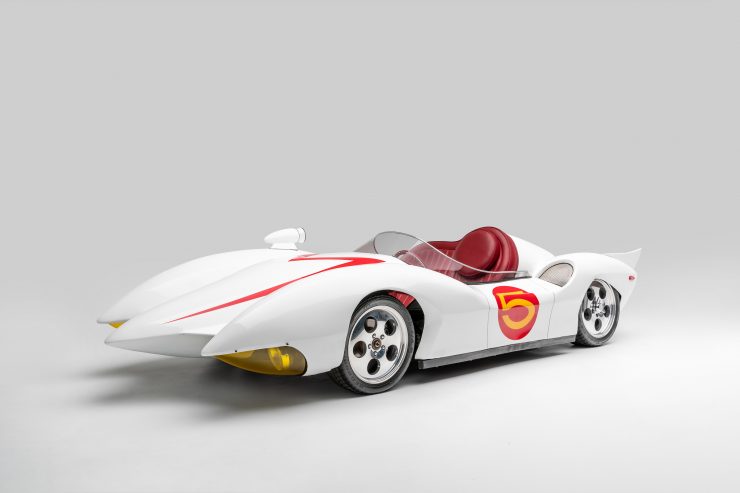 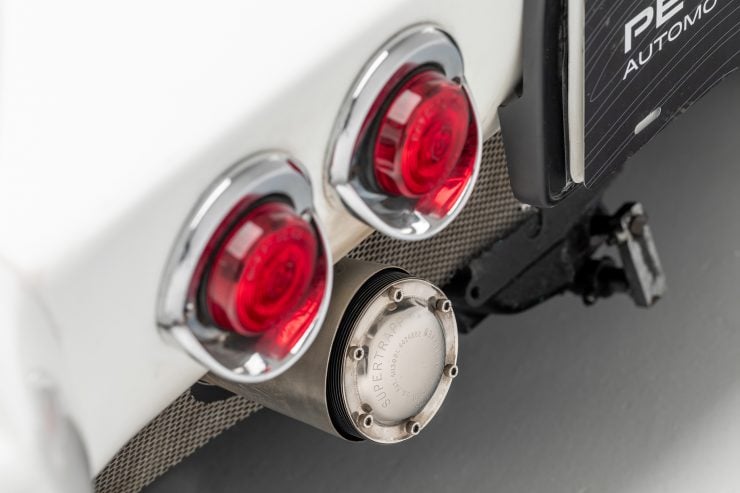 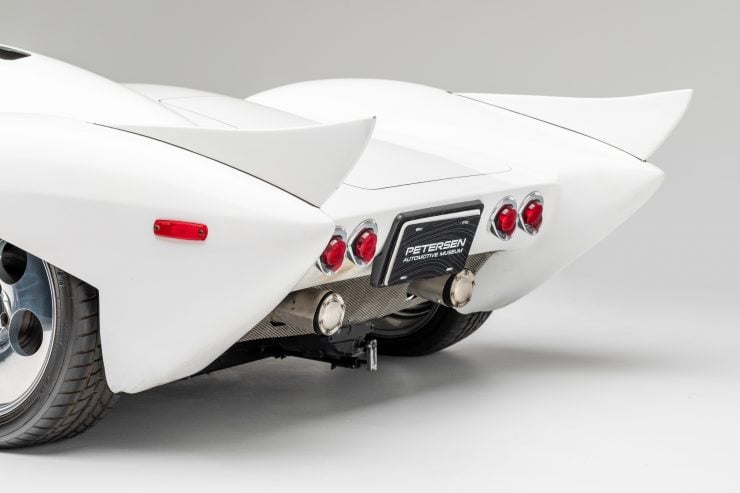 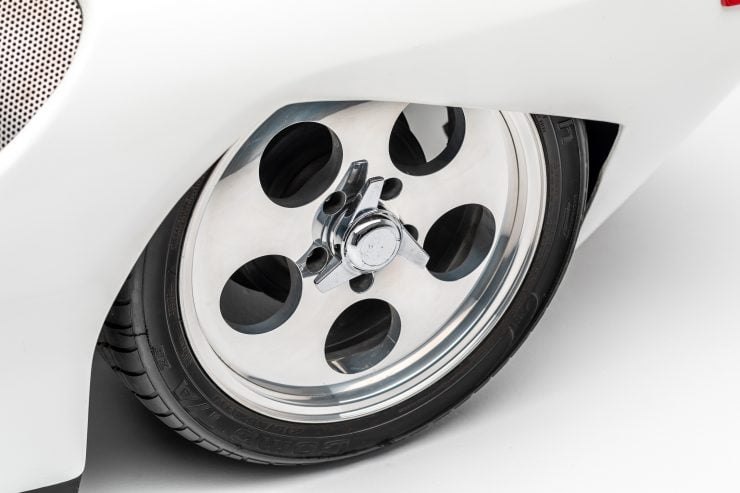 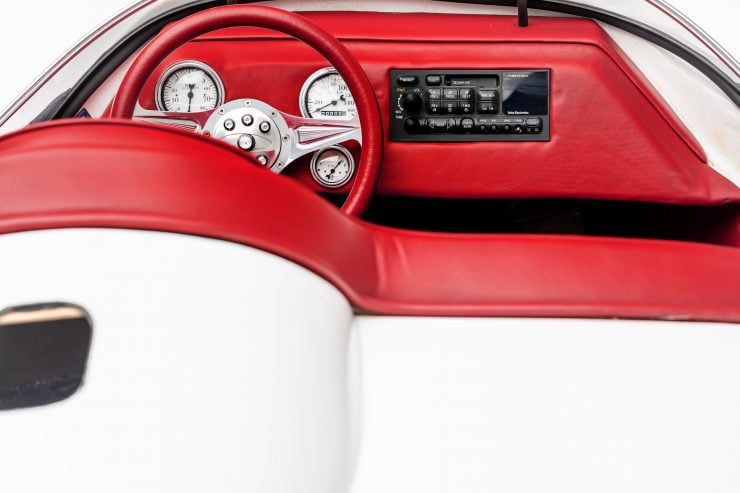 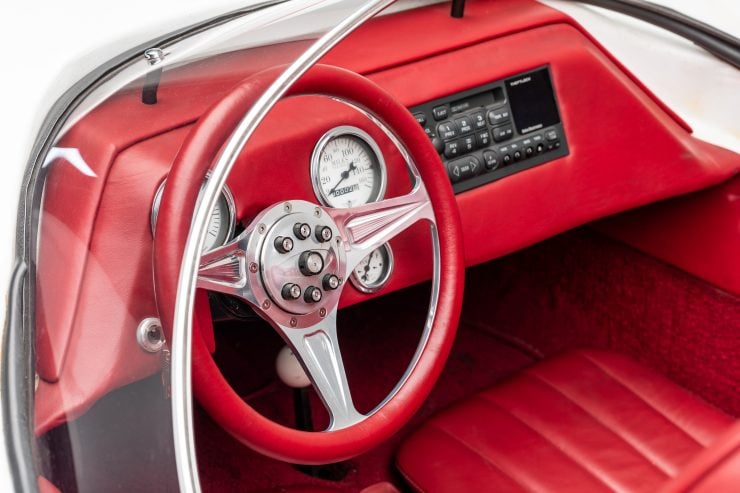 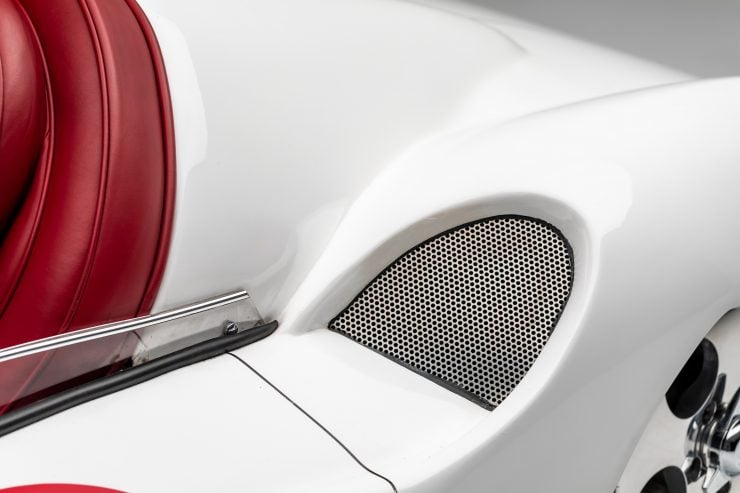 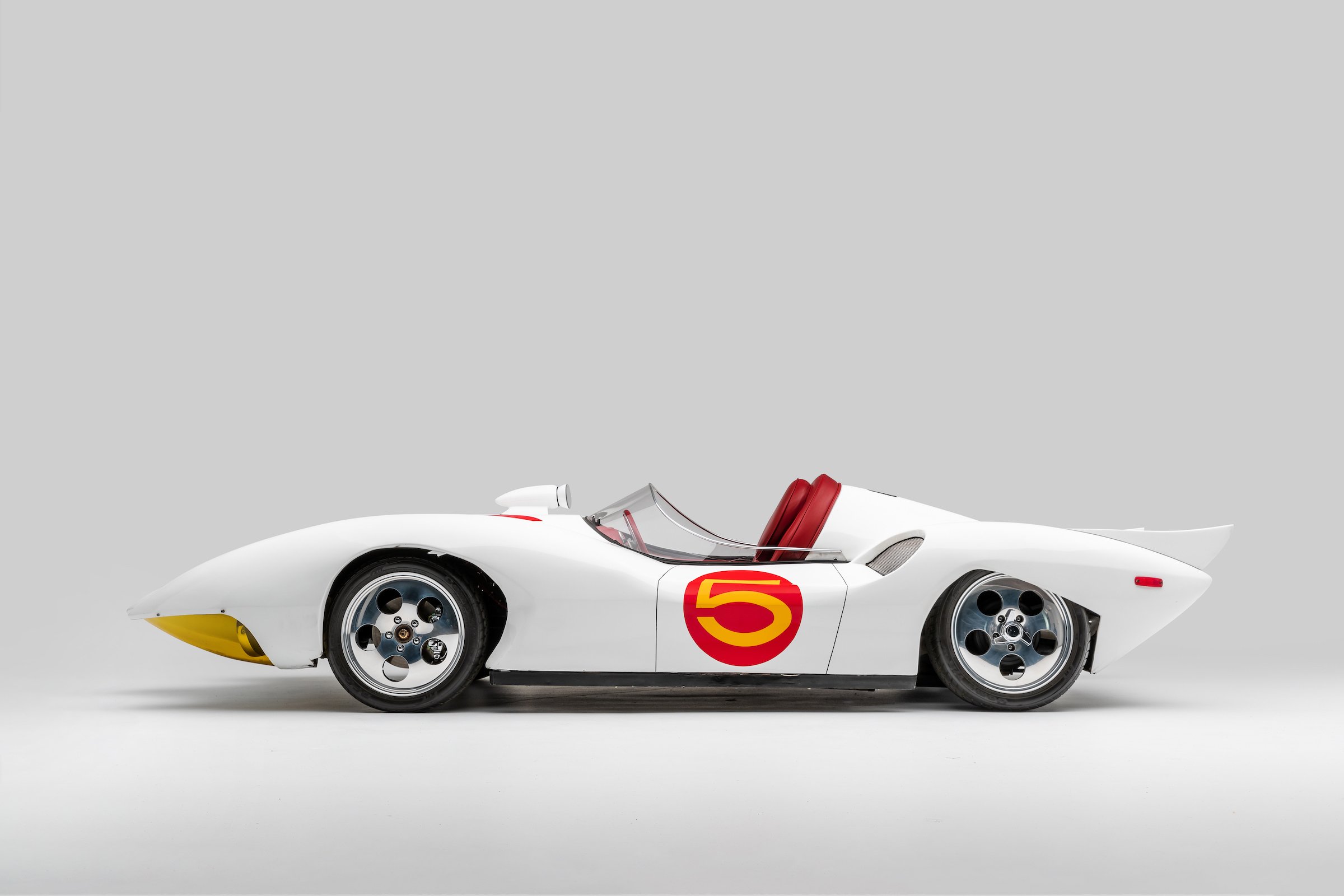