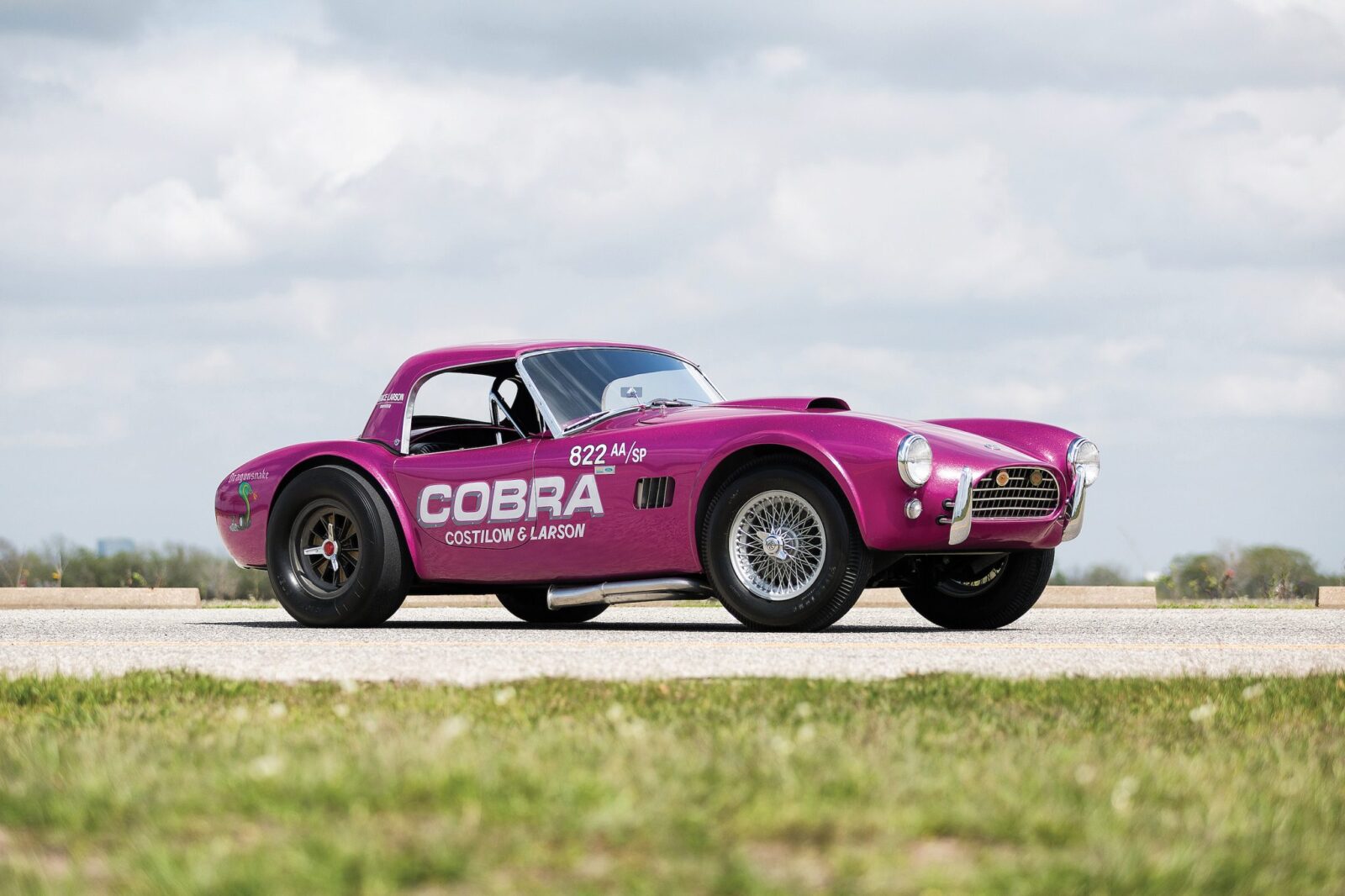 The Shelby Cobra is one of those larger than life cars that we’ve all owned at one time or another, typically at 1:18th scale. The Dragonsnake is an extremely rare variant of the Cobra, it was a dominant force on the 1/4 mile strips of the USA in the mid-to-late 1960s, taking victories from coast to coast, breaking multiple national records and taking a World Championship.

The Story of the Shelby Cobra Dragonsnake

The Dragonsnake was a special Cobra developed specifically for drag racing – it was the brainchild of a small team of Shelby employees who convinced Carroll to let them take a public relations car (chassis CSX2019) and rebuild it for the drag strip. The original Dragonsnake was fitted with the a 289 Ford V8, a series of modifications were made to the chassis and suspension to ensure the cars were ideal for drag racing – 23 mods were made in total.

Just four of these original 289 V8-powered Cobra Dragonsnakes were built by the factory, and an additional three were built independently with parts and specifications supplied by Carroll Shelby’s factory.

On the 1st of January 1965 the production run of the new 427 cubic inch-powered V8 Shelby Cobra began. The previous 289 Cobra had reached its reliable development peak at approximately 380 hp, but the new 427 could turn out 425 bhp before serious tuning.

Following on from their successes with the 289 Dragonsnake, Shelby decided to offer a DragonSnake variant of the newer and far more powerful 427 car. The spec-sheet included 14 special features, including seat belts, drag headers, Koni front and rear shocks (tuned for drag racing), Goodyear drag slicks on the back, a 4.54:1 rear end ratio, a hood scoop, twin electric fuel pumps, a battery relocation (behind the passenger seat), heavy duty half shafts, an N.H.R.A. approved scattershield, and an N.H.R.A. approved approved roll bar. 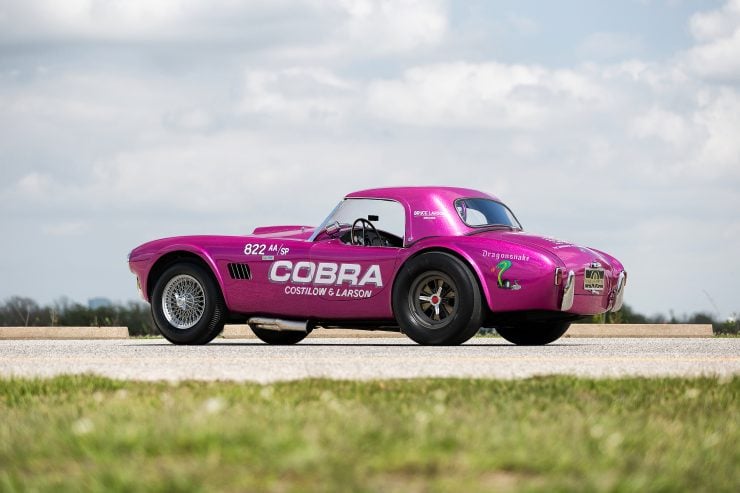 The car you see here is one of the original 289 examples, it was independently prepared, and it’s the most successful of all the 289 Dragonsnakes. The car was built by Jim Costilow and Bruce Larson, with new rear-fender flares, American Racing wheels, drag slicks, a chrome roll bar, a Sun tachometer, and a series of chassis tweaks. With its four twin-choke Weber carburettors the car was capable of 325 bhp, an astonishing figure for the mid-1960s, even before you note the car’s kerb weight of just ~2,000 lbs.

It’s rare that we see Dragonsnakes come up for auction, but this one is due to roll across the block with Worldwide Auctineers on the 22nd of April at The Texas Classic Auction. They estimate its value at between $1,100,000 USD and $1,300,000 USD, and you can click here to read more or register to bid. 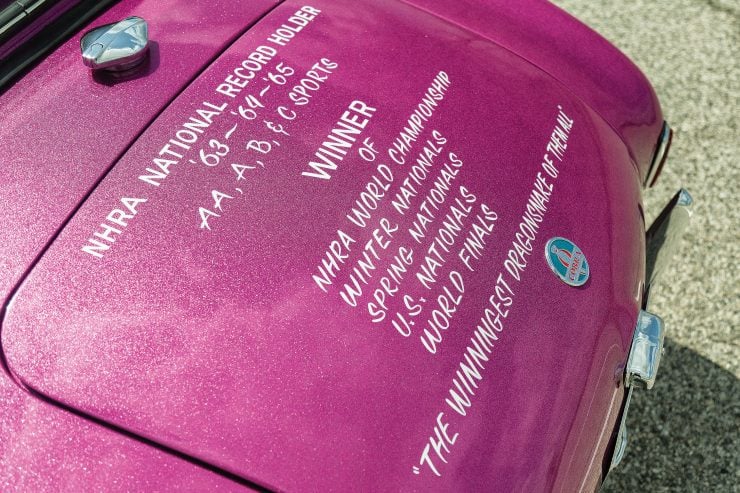 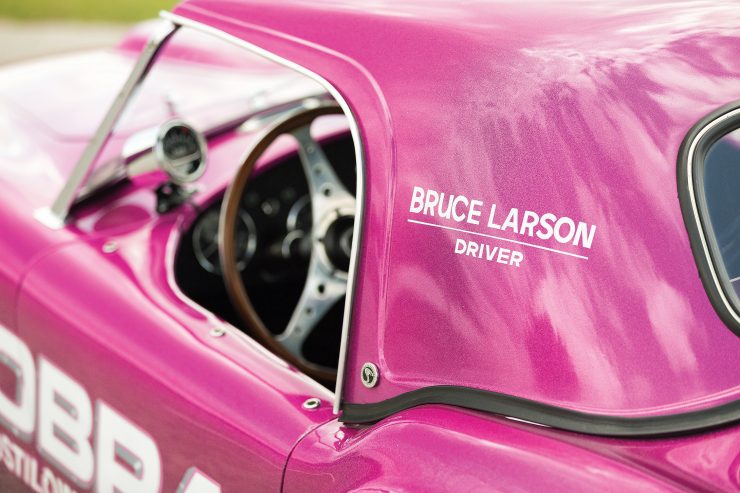 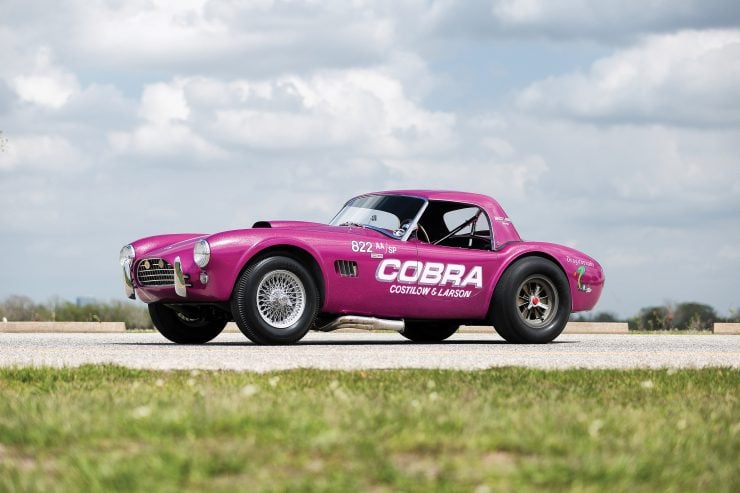 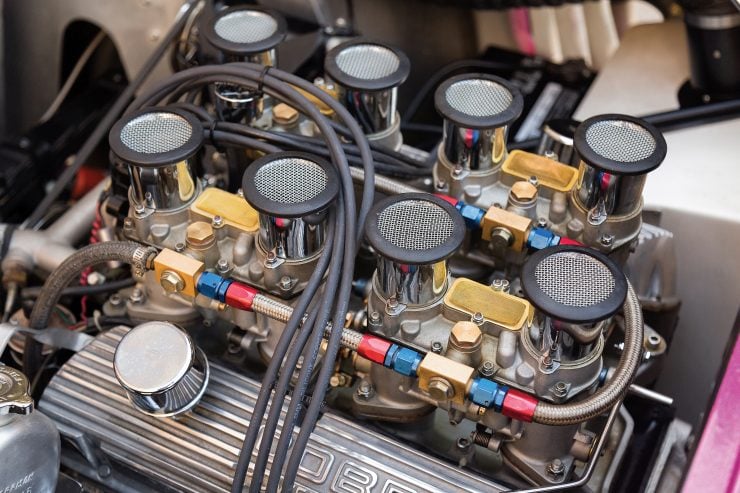 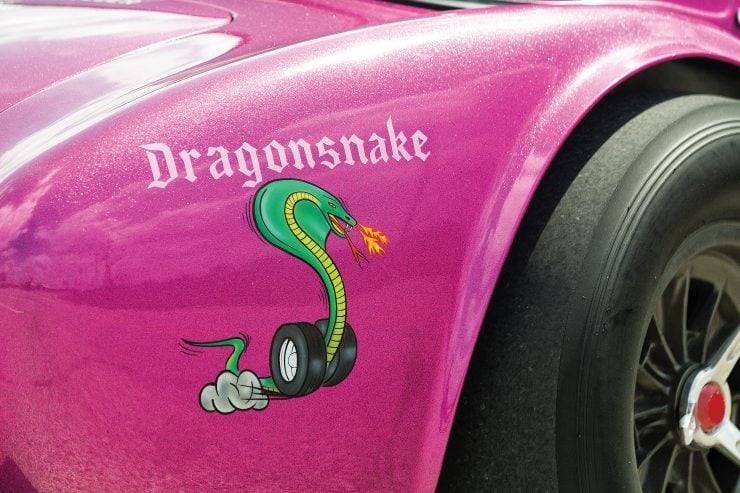 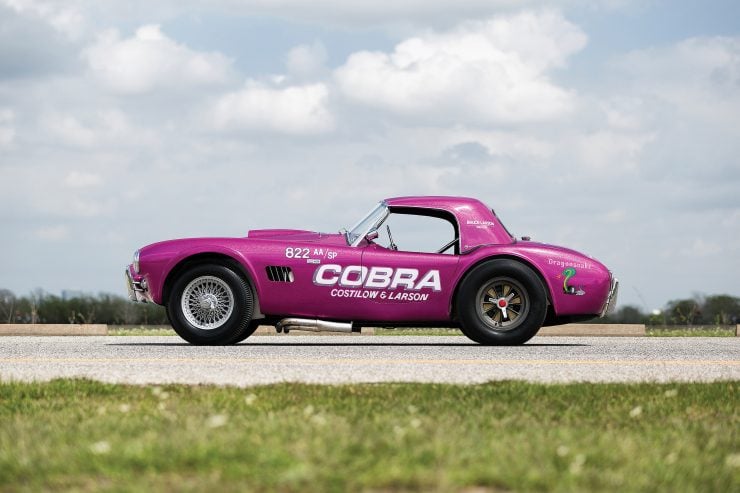 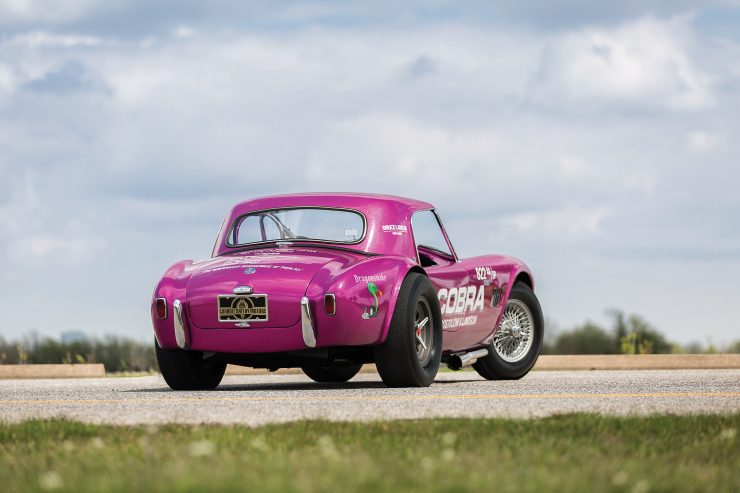 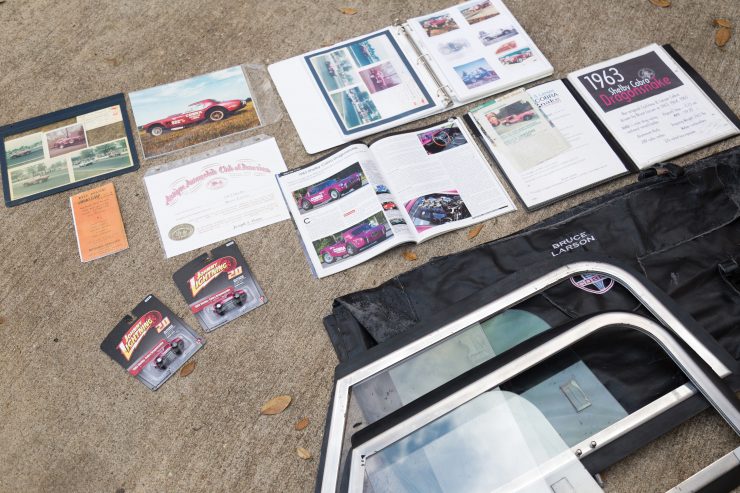 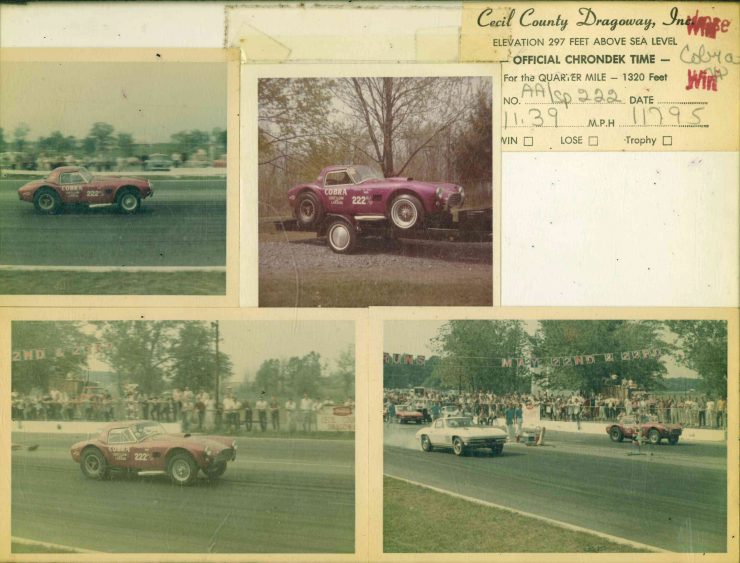 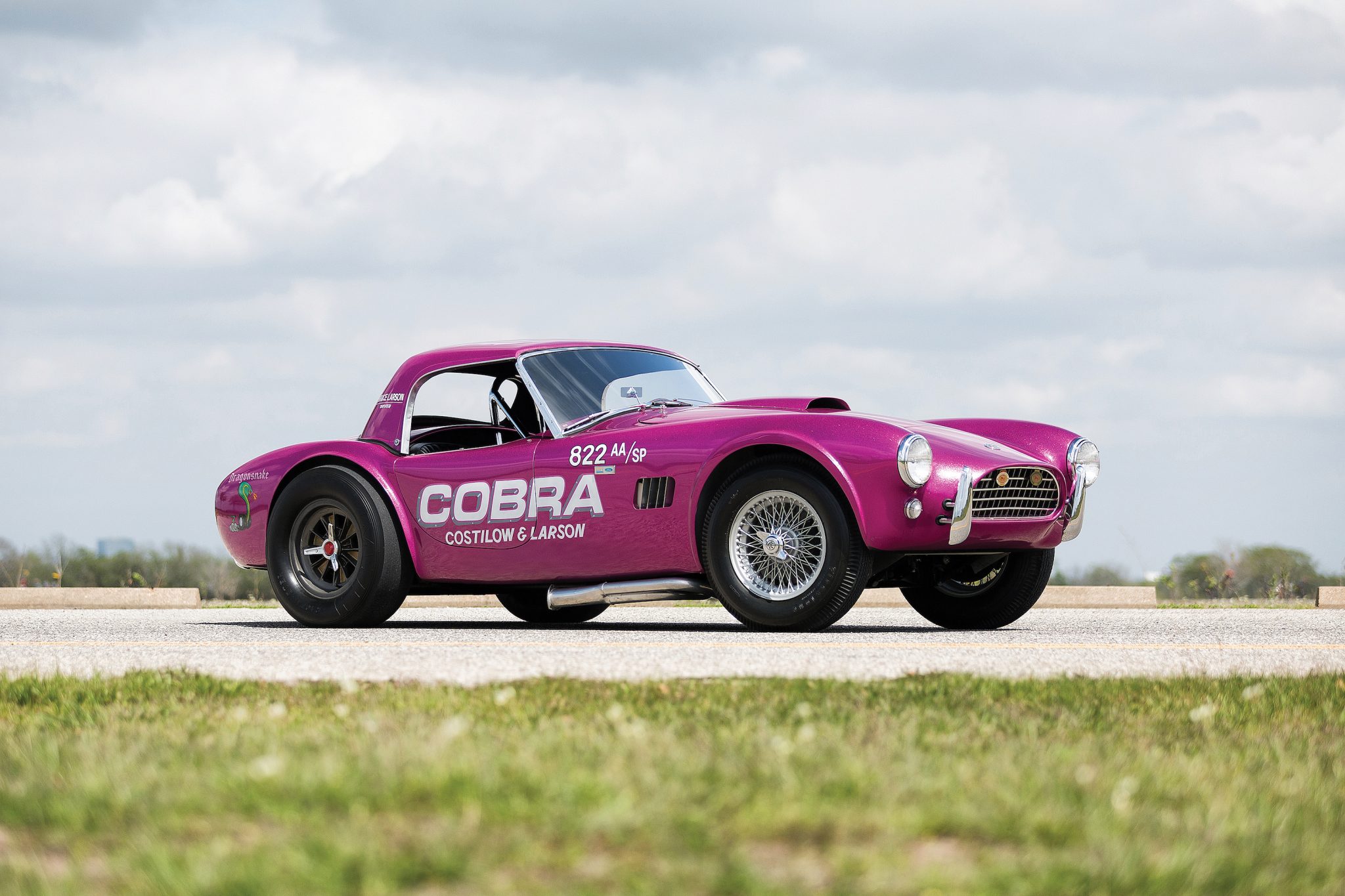