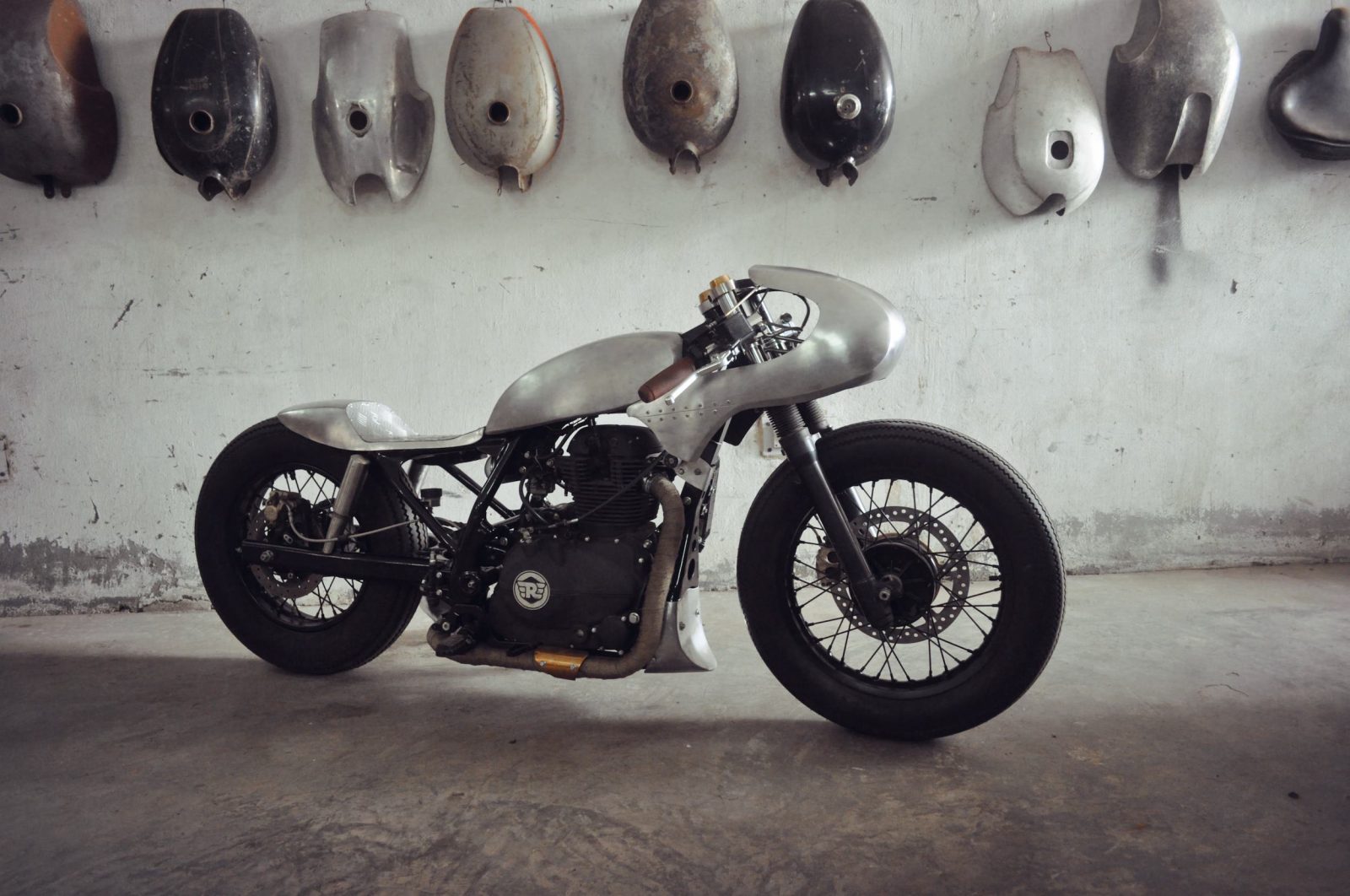 The Royal Enfield Himalayan was released in 2015 by the Indian company (formerly British) as the company’s new flagship model. It was penned by iconic motorcycle designer Pierre Terblanche, and fitted with an all-new engine designed for simplicity and repairability.

The upper end of the adventure touring genre is hotly contested by the likes of BMW, Triumph, KTM, Ducati, Honda, and Yamaha – but Royal Enfield is more interested in the affordable entry bracket, with an eye on markets in the developing world.

Rather than use the same tried and tested motor used in both 350cc and 500cc form in their current lineup, Royal Enfield developed a new long-stroke single cylinder called the LS410. This unit construction motor is air and oil-cooled, and has a SOHC, as well as electronic fuel injection and a digital ignition. Power output isn’t outrageous at 24.5 bhp, however this was never meant to be a speed machine – that is until Indian custom bike builder Aseem Singh Pawar got his hands on one.

Aseem of Inline 3 is a New Delhi local and a rapidly rising figure in the Indian custom motorcycle scene, he was chosen to receive a brand new Royal Enfield Himalayan to create the world’s first custom based on the new model.

Deciding exactly what to build wasn’t easy for Aseem, particularly as he knew that this bike was going  to take pride of place on the showroom floor at South Delhi Motorcycles – the largest Royal Enfield dealership in New Delhi.

Eventually he settled on building a salt flat racer, and not just in looks, this bike will be raced on the Sambhar Salt Lake a couple of hundred miles south west of New Delhi.

The build began with a full teardown – Aseem knew he had to drop the bike’s weight and lower its frontal profile significantly. The original subframe and rear monoshock were discarded and a hardtail was fabricated and welded into place. A new set of stainless steel triple trees were made and fitted, allowing the forks to slide through and lower the front by 4 inches.

All of the original bodywork was removed and replaced with hand-beaten aluminium alloy panels – as well as an unusual checker-plate seat designed for grip over comfort. Aseem and his crew managed to drop 20 kilograms off the Himalayan’s kerb weight, getting it down to just over 160 kgs.

The original exhaust was removed in favour of a far less restrictive aluminium custom unit that exits out of an unusual muffler on the lower left side. The completed bike now has pride of place on the main floor of South Delhi Motorcycles – and Aseem is going to update us with pictures when they roll it off the flat bed truck onto the salt at Sambhar to see what she’ll do. 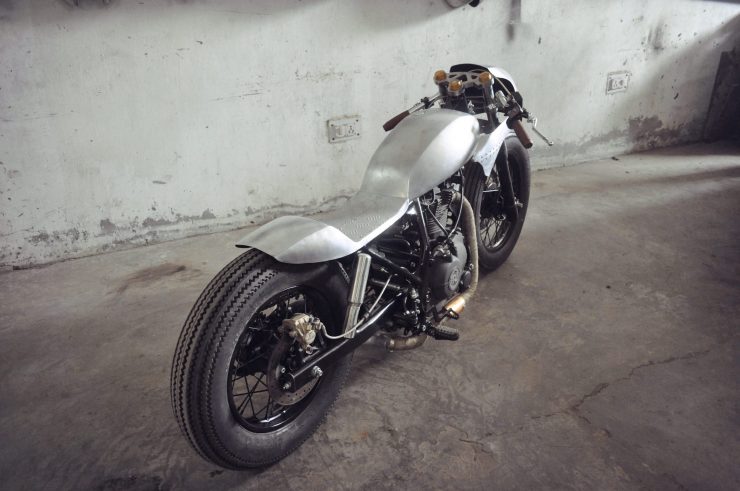 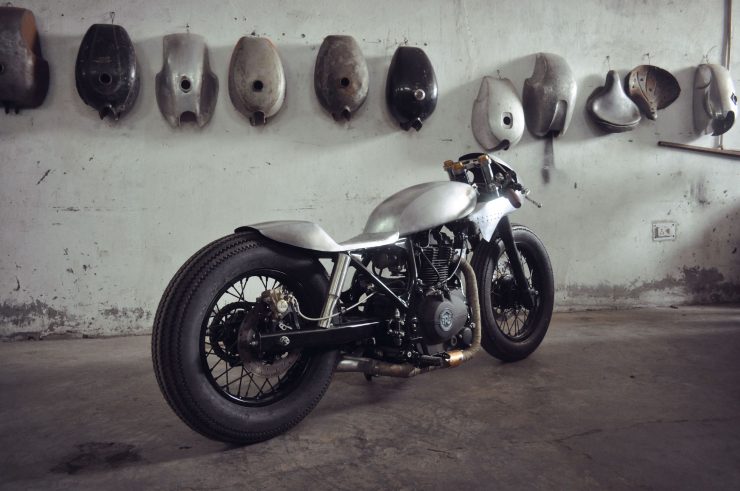 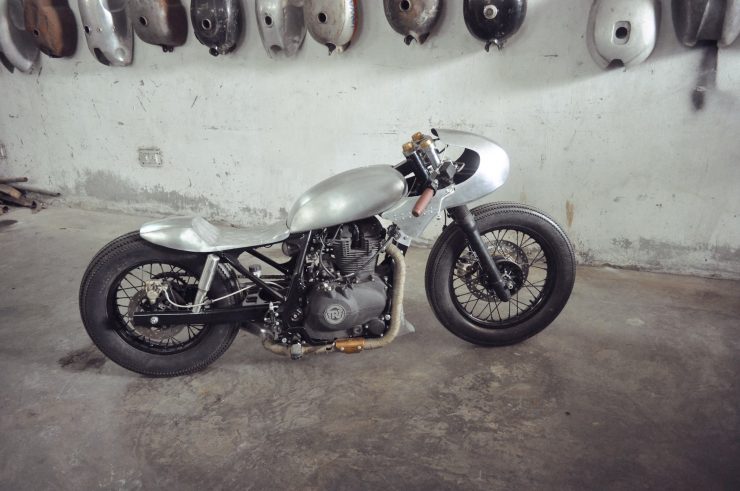 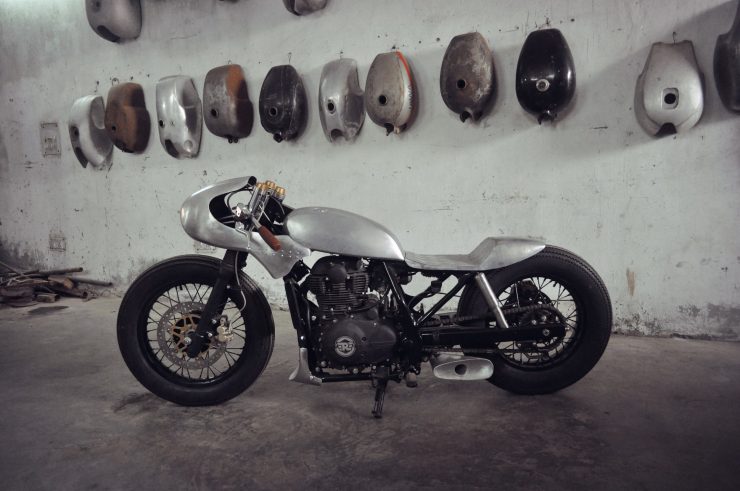 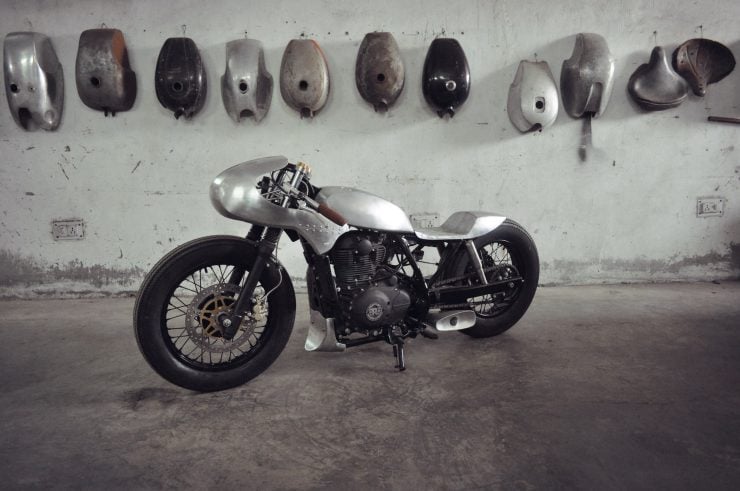 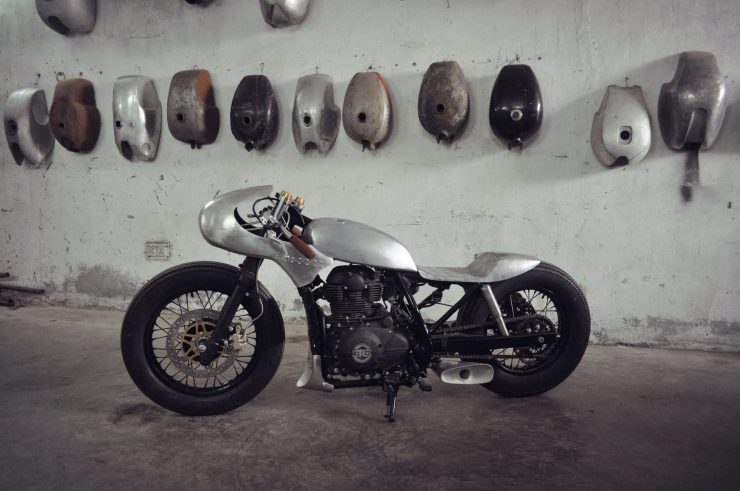 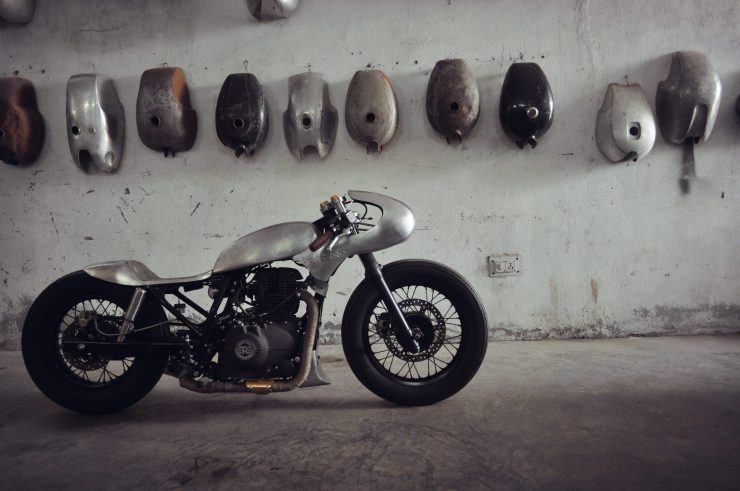 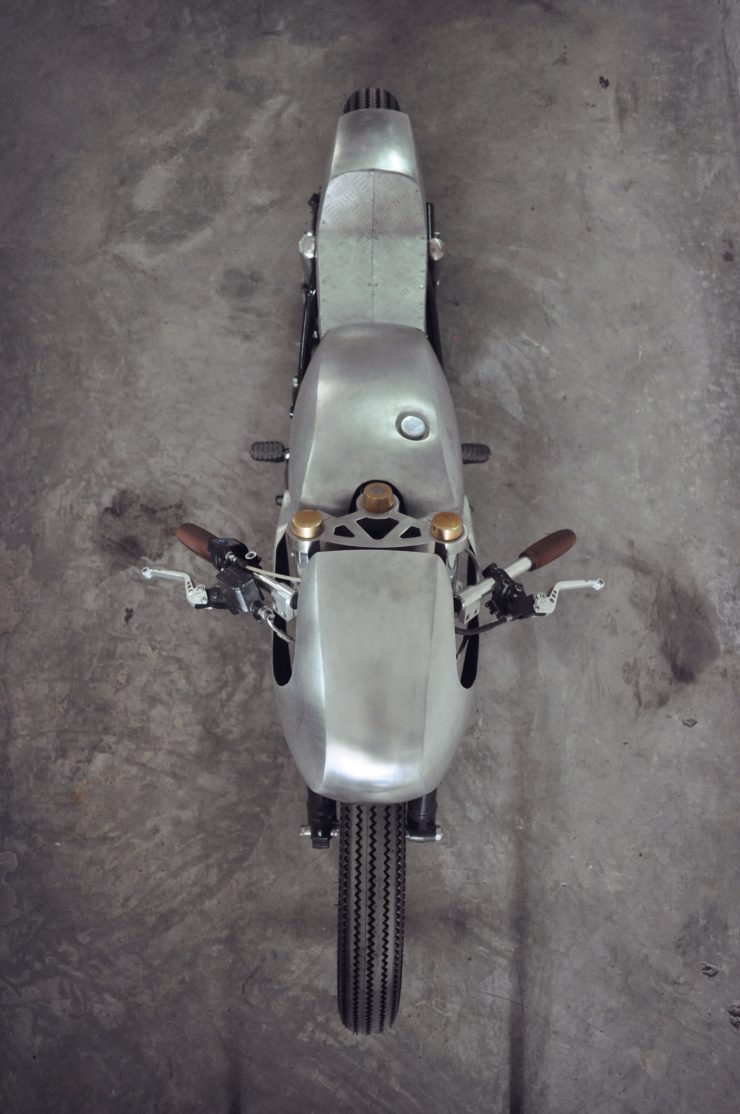 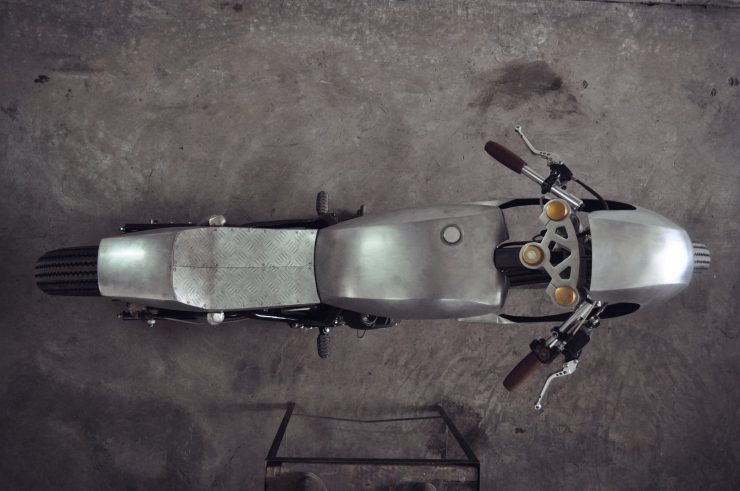 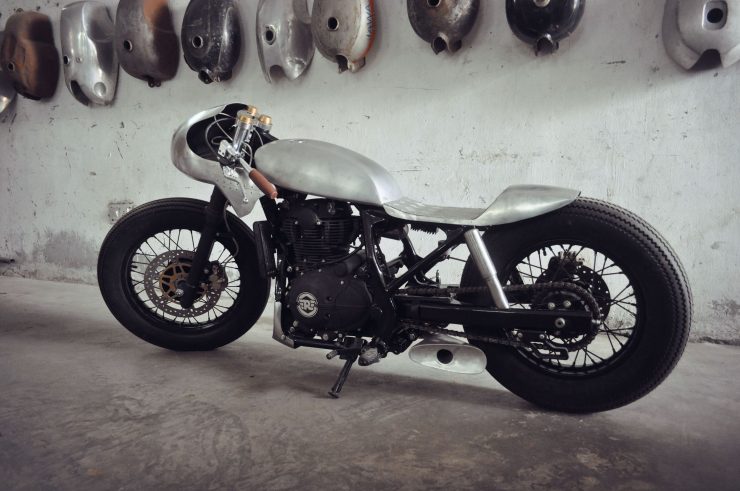 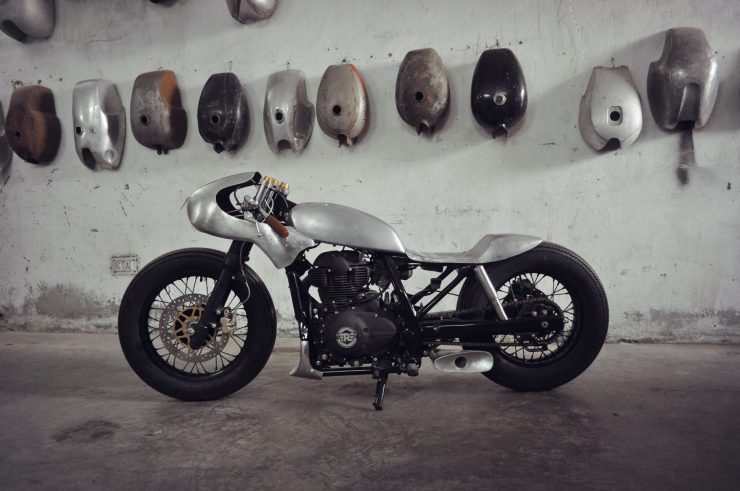 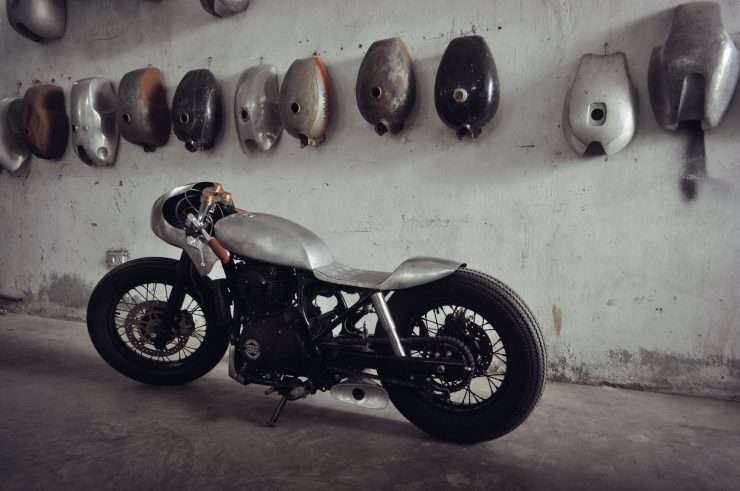 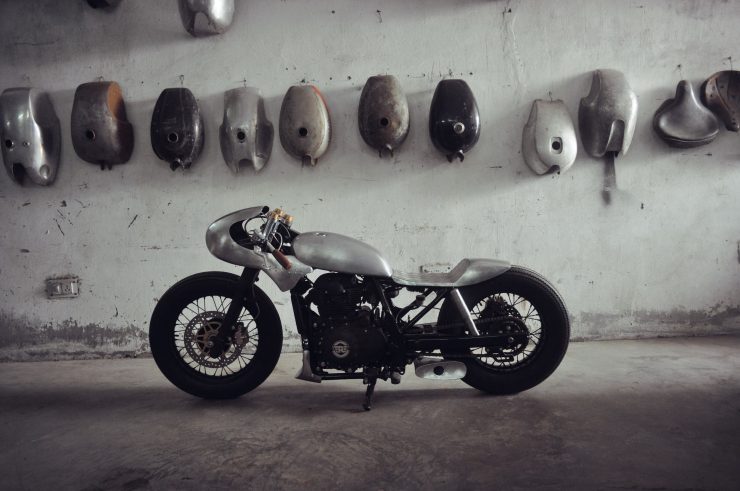 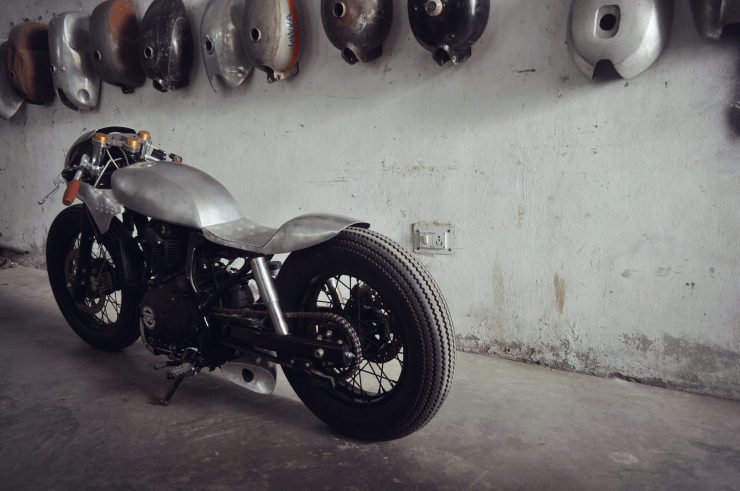 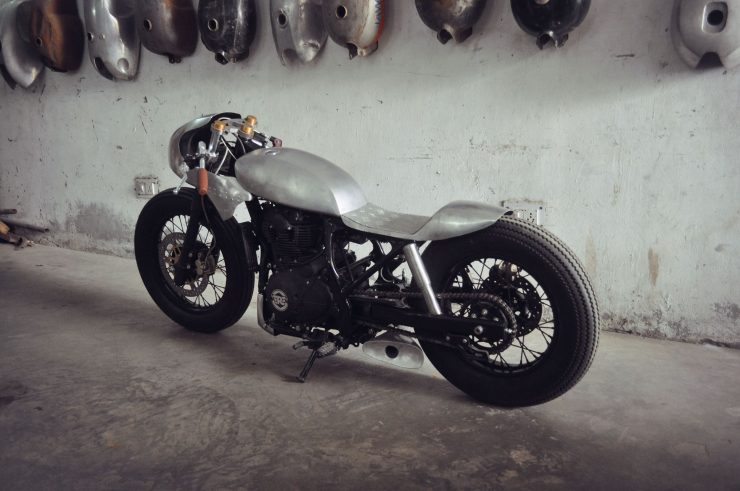 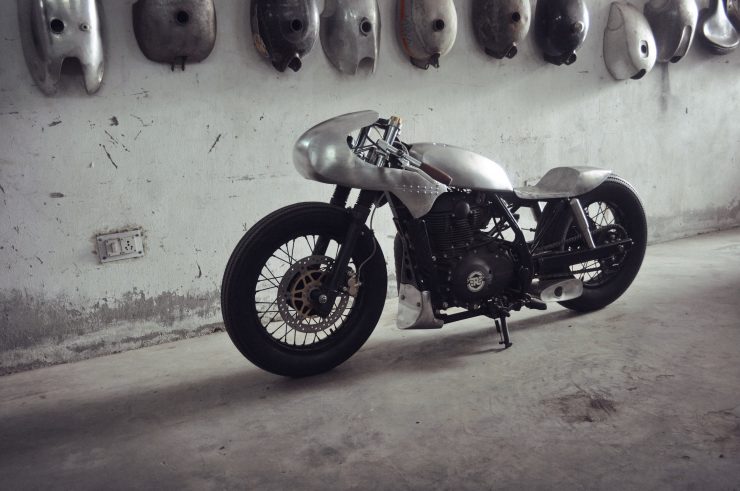 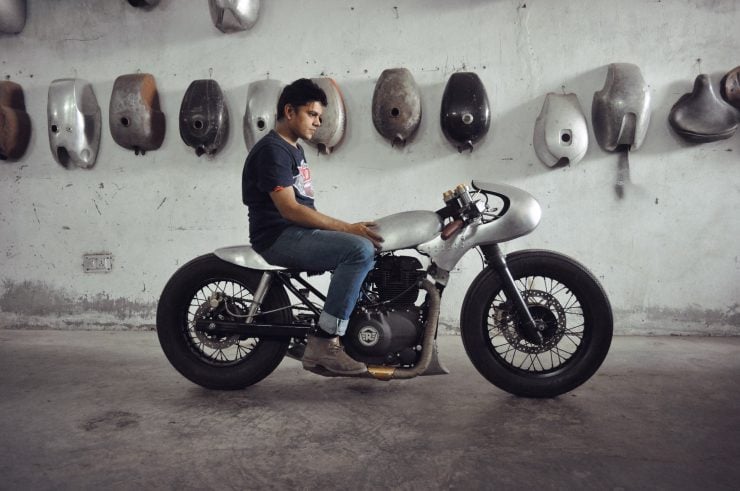 This electric scrambler by Droog Moto started life as a Brammo Empulse R, one of the most important electric production motorcycles of the modern age. Electric motorcycles make a lot of sense for off-road use,…