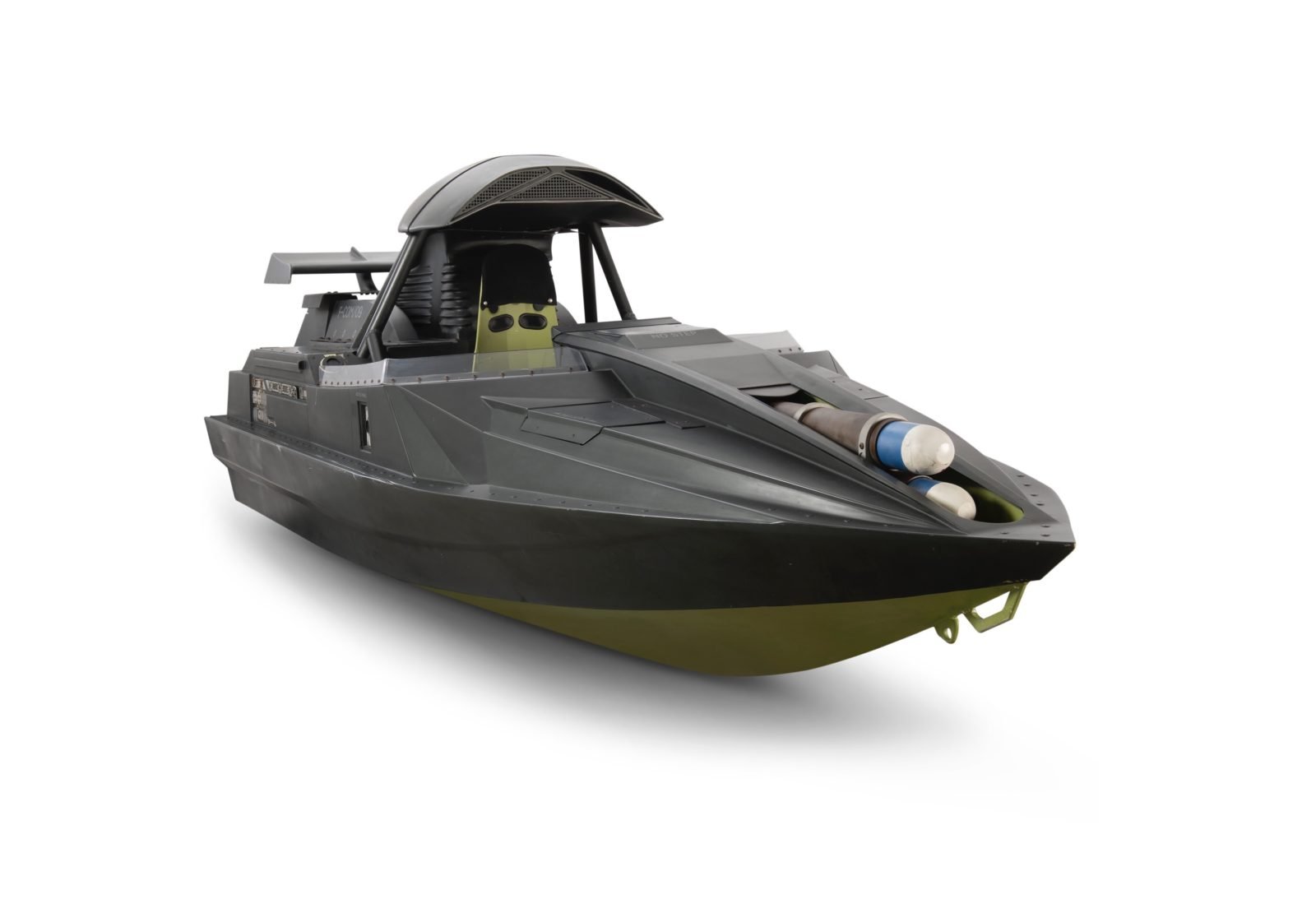 This is the Q Boat from “The World Is Not Enough,” the 19th film in the James Bond series that was released in 1999 with Pierce Brosnan in the lead role. It’s powered by a 300 bhp marine V8 engine powering a jet drive.

The pre-credit opening sequence featuring the boat chase is 14 minutes long – the longest in 007 film history up until that point – and it shows the boat flipping, jumping, diving under water, firing torpedos, and finally, launching Bond onto a rope dangling from a hot air balloon.

Fast Facts – The Q Boat From “The World Is Not Enough”

In the film, the Q Boat is a jet powered stealth vessel being worked on by Q in his lab at MI6 headquarters in London. The boat doesn’t get much of an introduction due to the fast-paced nature of the opening sequence, we just see Bond jump into it and drive it out of the building and into London’s iconic Thames river.

Above Video: This is the trailer showing much of the opening sequence of the film, including the boat chase scene – much of which features the boat you see here in this article.

From the sequence we know that the boat was supposed to be powered by a turbine jet engine, with twin jet exhausts visible on the rear. It also has a dive function allowing it to operate underwater, and it’s equipped with front-launched torpedos and a computer navigation system.

In total there were 15 Q Boats built for the film, some were wrecked during filming of course, and the example you see in this article was used in the majority of the chase sequence as its fully functional and equipped with the opening torpedo hatch up front.

The hull of the Q Boat is a relatively standard deep-V speed boat design with a rear-mounted 300 bhp marine V8 powering a water jet drive system – so there’s no external propeller.

The upper section of the boat has been given a stealth shell with a single seat cockpit under an induction canopy, a rear wing, and of course that torpedo launcher up front. 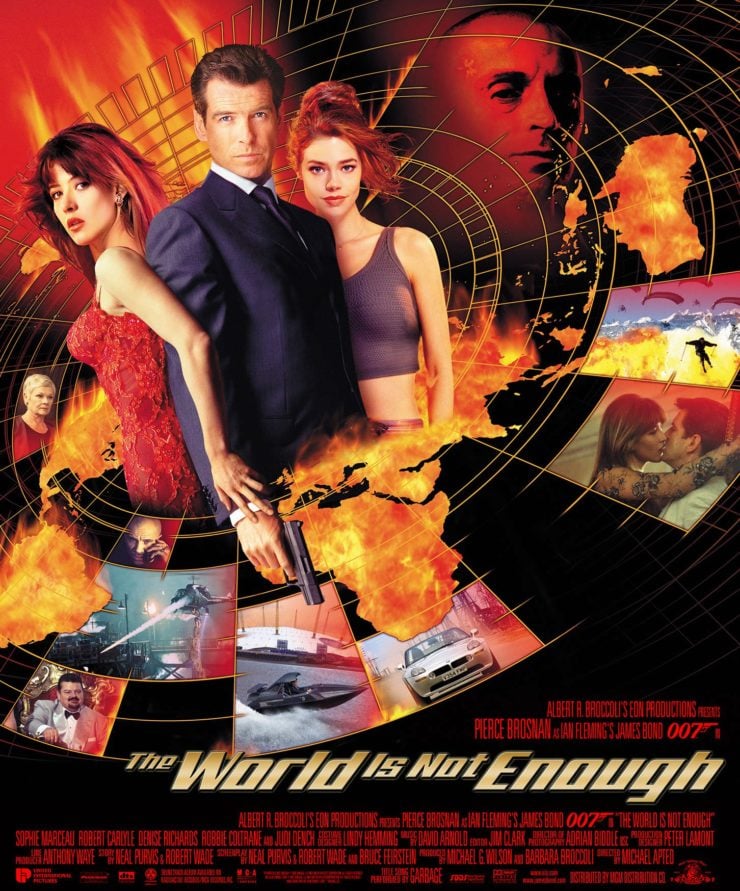 The Q Boat chase scene was one of the most memorable parts of the film, and the boat was featured on the film’s official poster right under James Bond himself.

They make a point of explaining that the boat is being sold as a non-running collectors item – it’s not registered for use on the sea or on inland waterways, and it has no Boat Safety Scheme (BSS) certificate.

None of that matters a whole lot though as the buyer will almost certainly be planning on adding it to a collection or displaying it in someway, not in taking it down the Thames for a reenactment.

If you’d like to read more about the Q Boat or register to bid you can visit the listing here. 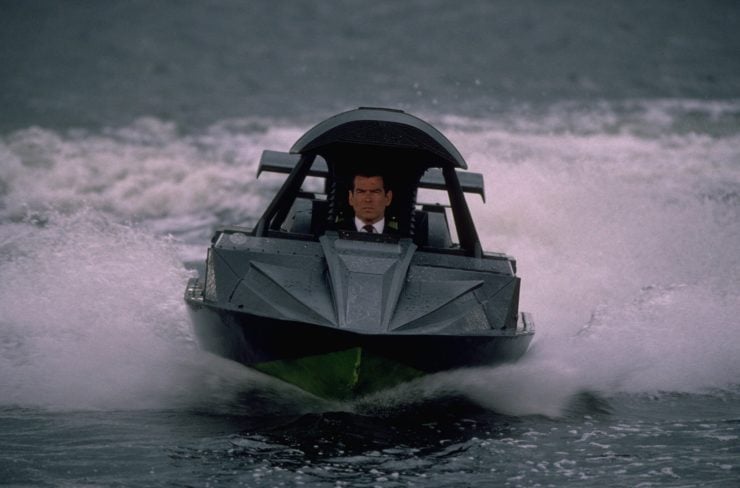 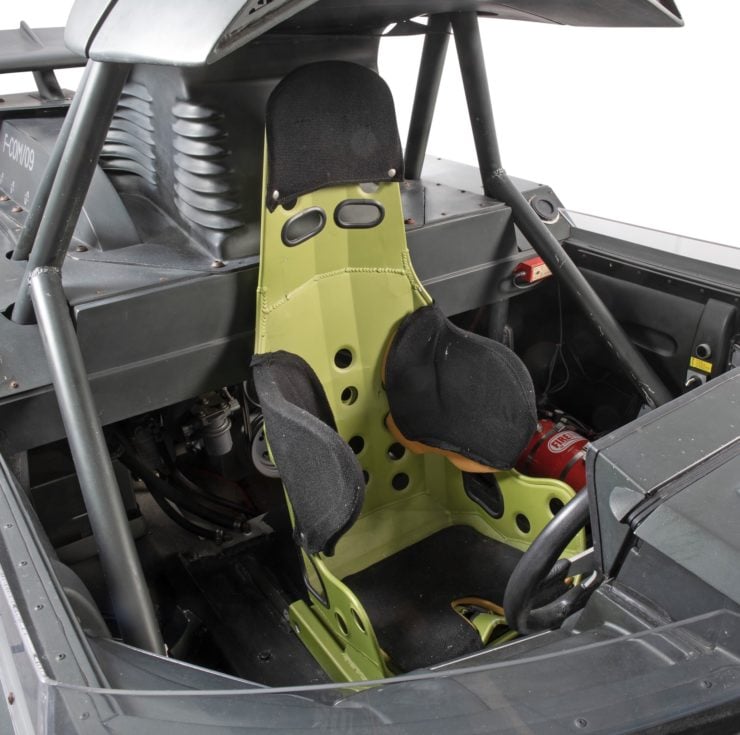 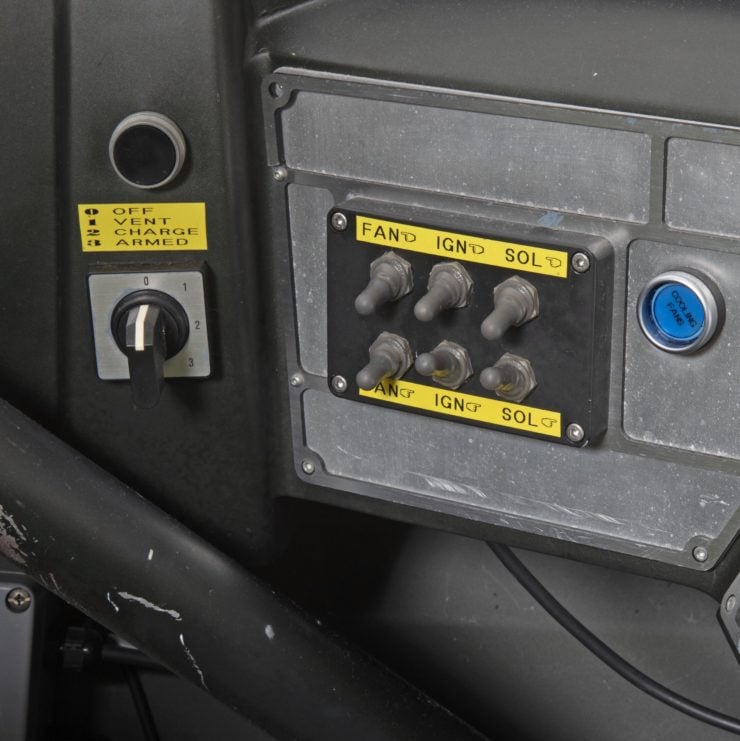 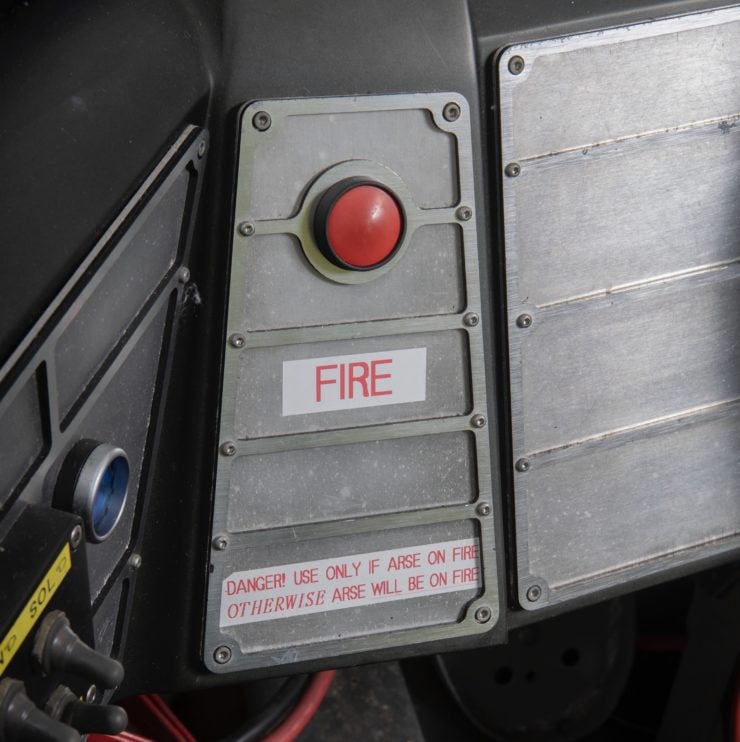 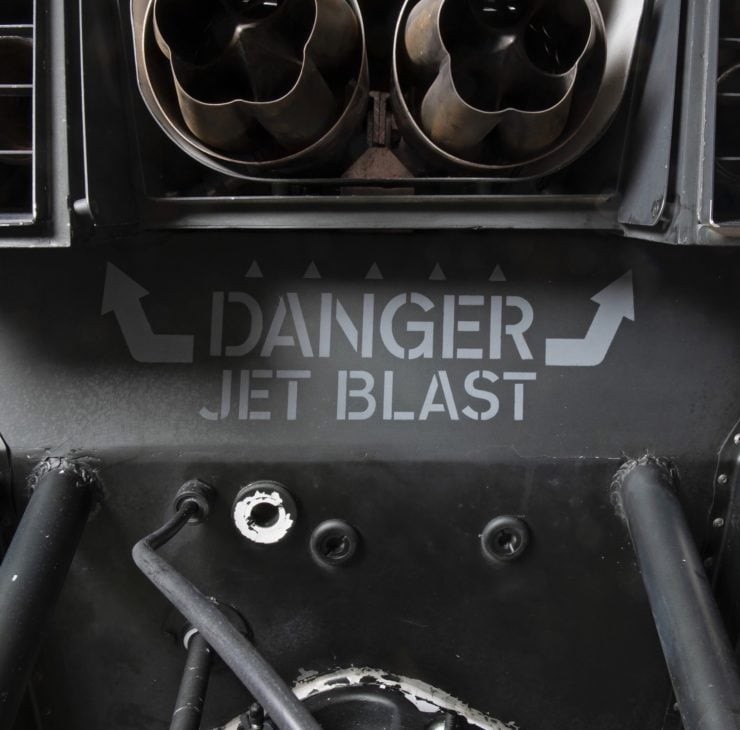 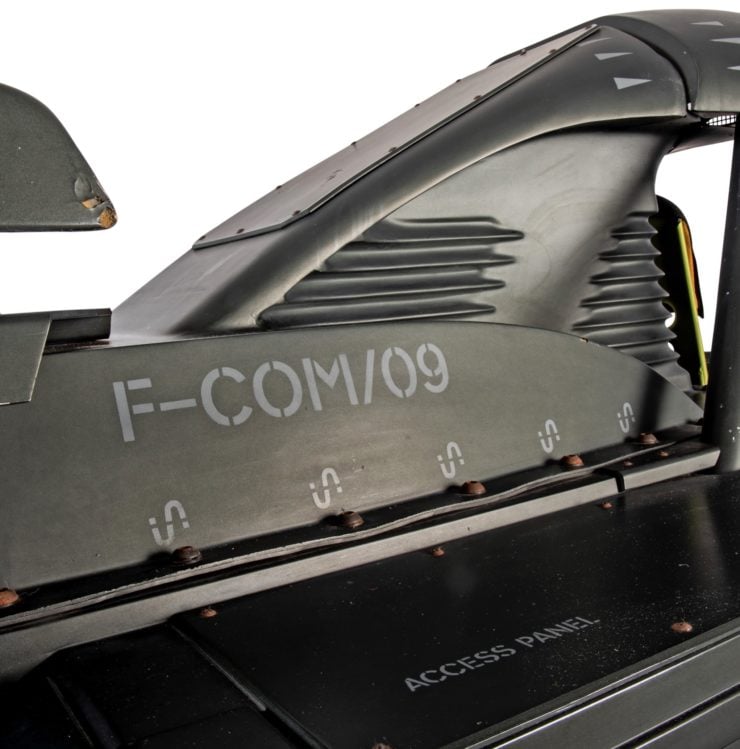 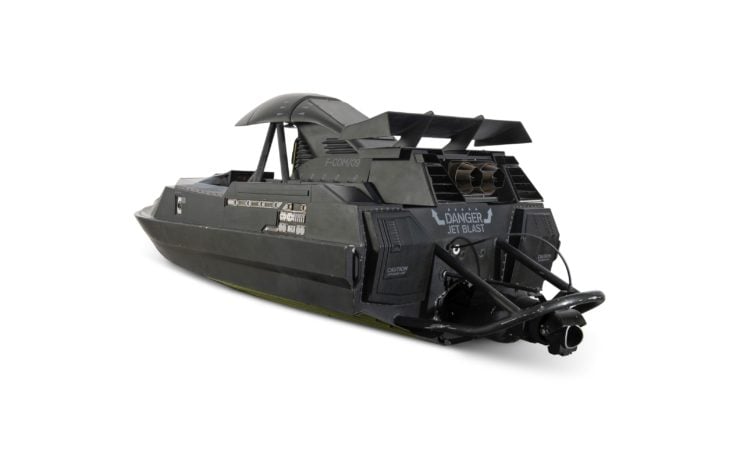 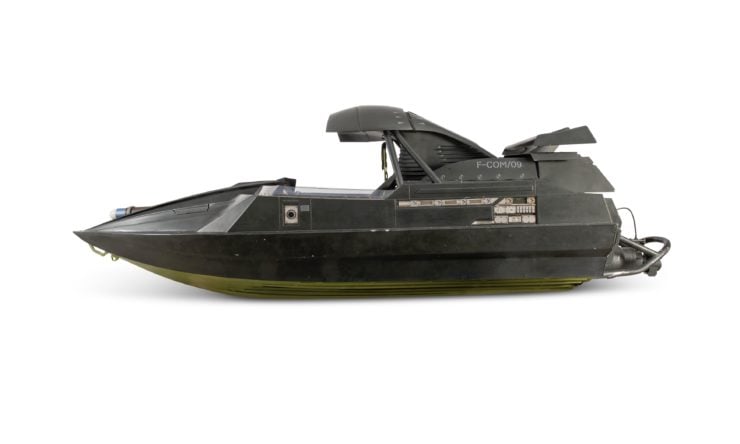 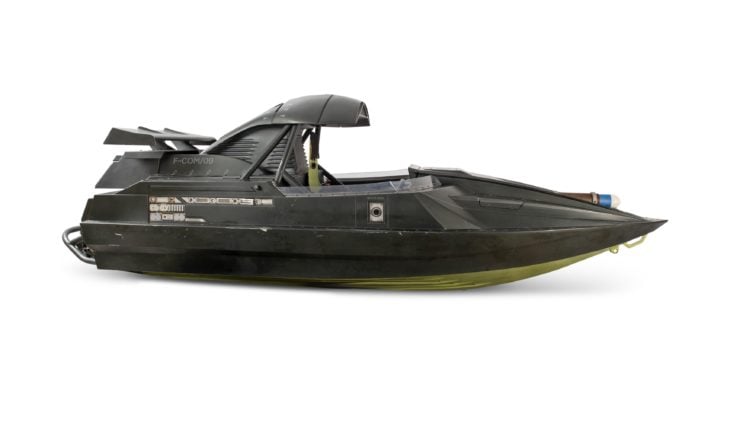 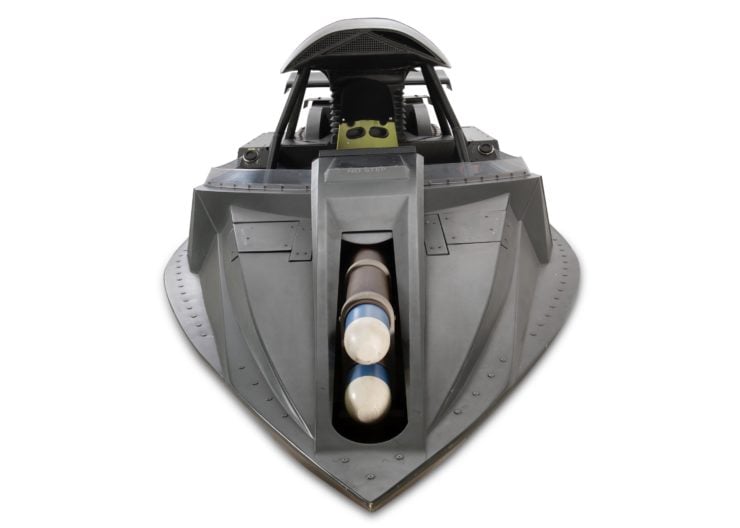