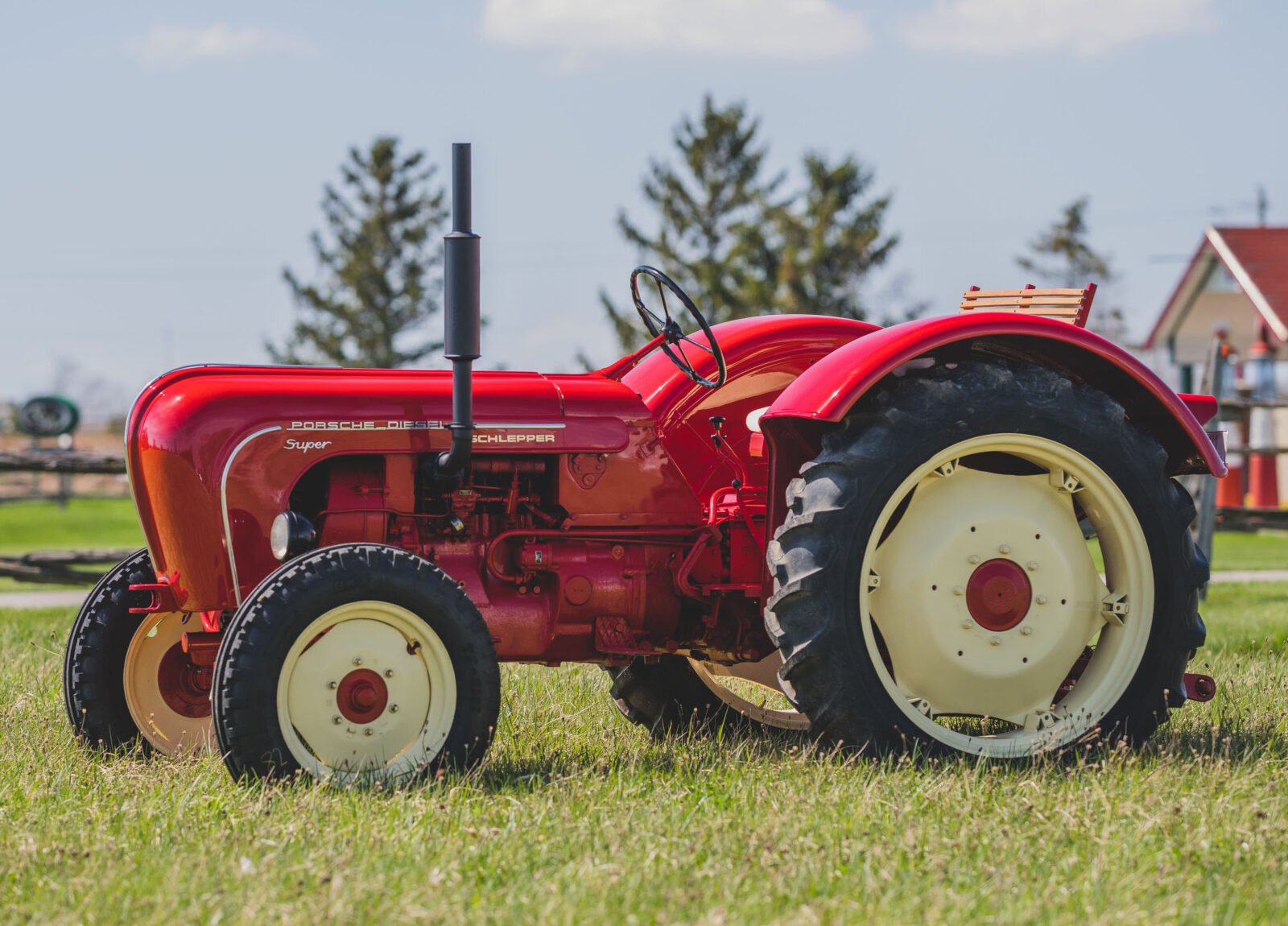 Finding a restored 1960s-era Porsche for sale with a projected price of between $20,000 and $30,000 USD isn’t something we’ve typically seen for decades, not since the popularity of older air-cooled cars from Stuttgart took off like a rocket.

The only vehicles carrying Porsche badges from this era that fall anywhere near the affordable range now are mostly tractors, with diesel powered air-cooled engines and gleaming bright red paintwork.

Most members of the classic car world are well acquainted with the fact that Ferruccio Lamborghini built tractors long before he began building supercars, but many don’t know that Ferdinand Porsche designed a slew of tractors himself – some of which remain in service on farms and vineyards to this day.

The Porsche-Diesel Super was built between 1956 and 1963 but the design work on the first Porsche tractors had begun all the way back in the early 1930s alongside the car that would become known as the Volkswagen Beetle.

The connection between the Beetle as the “folk’s wagon” or “people’s car” and the Nazis have been well documented, but many don’t know that Ferdinand Porsche was also designing a “volks schlepper” or “people’s tractor” right alongside it.

Much like the Beetle these Porsche tractors were designed to be as mechanically simple and reliable as possible, they were also designed with a hydraulic coupling between the engine and transmission – to make them easy to drive and eliminate the chance of the driver burning out the clutch.

Porsche tractors were offered with 1, 2, 3, or 4 cylinder diesel engines – these engines were designed to be as tough as possible and unusually it was possible to remove each cylinder and its head individually. This helped simplify the process of working on them considerably and it meant a single person could perform extensive work on an engine without needing additional help to lift long cylinder heads and other heavy parts. 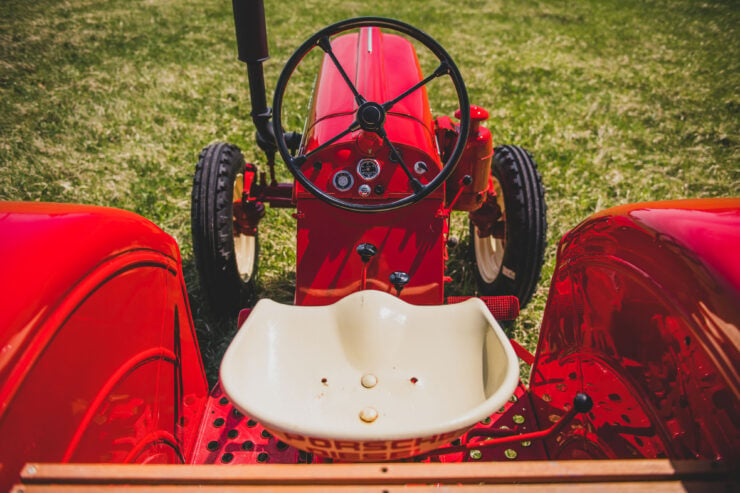 Despite the fact that the Porsche tractor designs were advanced they couldn’t be put into production immediately after the war as only companies that already had experience building tractors were permitted to start building them once again – due to tight restrictions on materials.

As a result of this, Porsche licensed his designs to two companies to build them under contract, one German company and one Austrian. This all changed in 1956 when Mannesmann AG bought the rights to the engine and tractor design, putting them into mass production in Germany in a former Zeppelin factory. From 1956 until 1963 this factory built over 125,000 Porsche-Diesel tractors and exported many of them around the world.

During the years of production only 1,000 or so Porsche-Diesel tractors were sold in North America, locally built tractors were far more affordable and at this time the Porsche brandname wasn’t yet quite as famous as it is today.

The top of the line Porsche tractor was the Porsche-Diesel Super, it’s powered by an air-cooled, four-stroke diesel engine with a swept capacity of 2,466cc. Power is sent to the rear wheels via a 4-speed dual-ratio transmission and there’s a power takeoff for powering farm machinery and ancillaries.

The demand for restored Porsche tractors has been shooting up in recent years and as a result we’re seeing more and more of them come to market. There are clubs dedicated to keeping them on the road and helping to source parts, and they’re warmly welcomed at both car shows and rural shows for display.

The restored Porsche-Diesel Super you see here benefits from a full restoration, it’s accompanied by owner’s manuals and restoration invoices, and it’s being offered with a price guide of $20,000 to $30,000 USD. If you’d like to read more about it or register to bid you can click here to visit the listing on RM Sotheby’s. 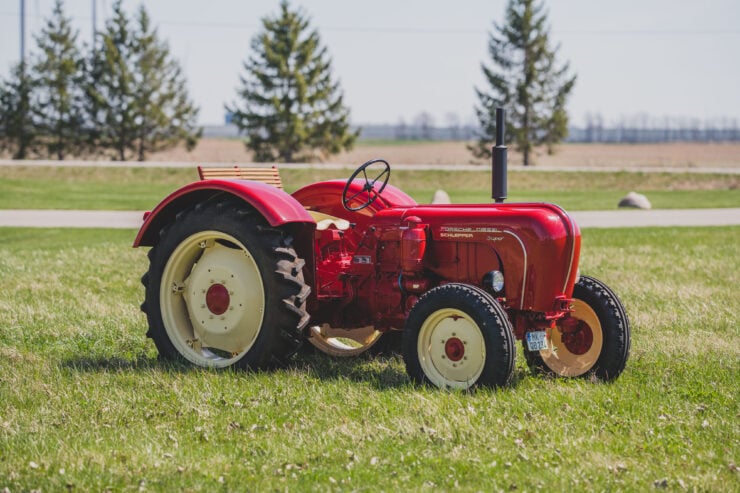 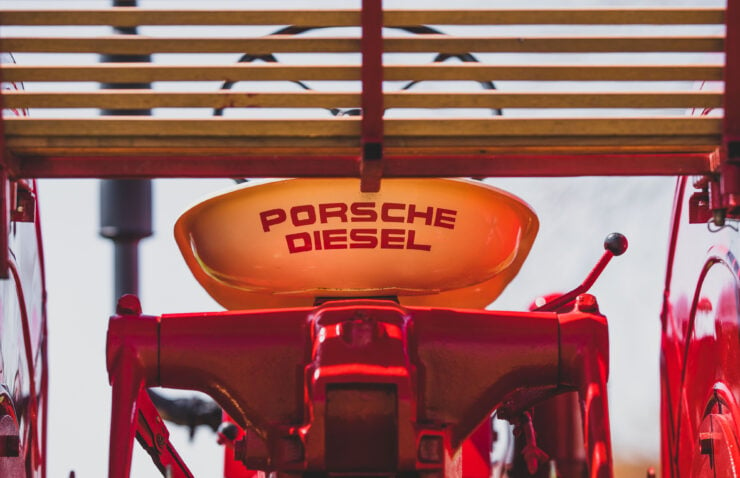 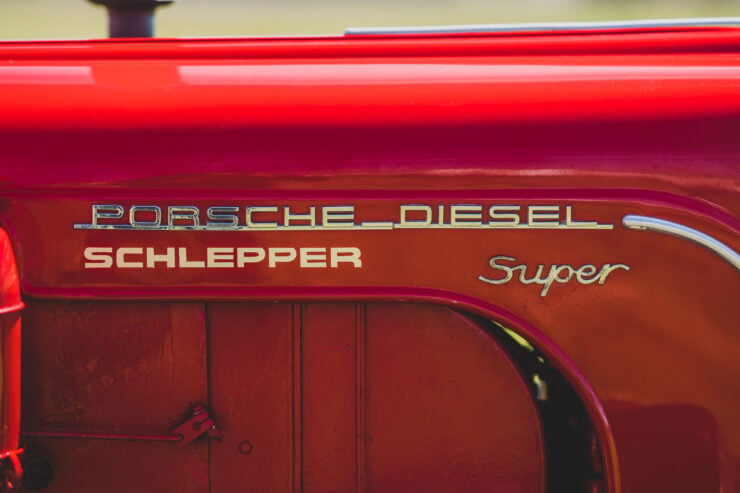 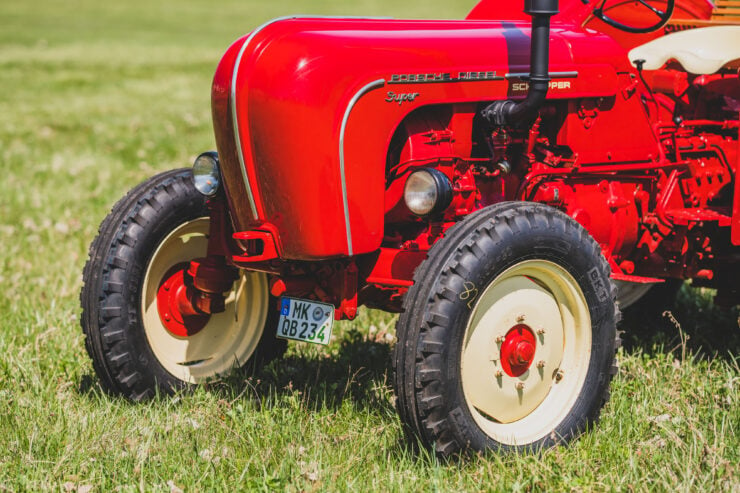 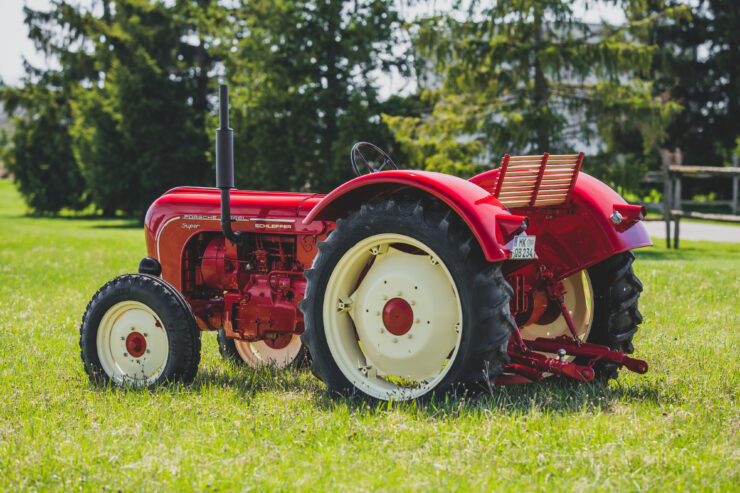 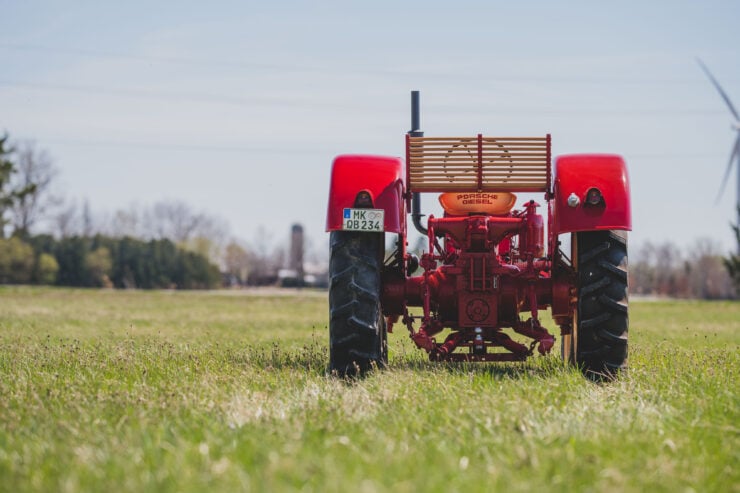 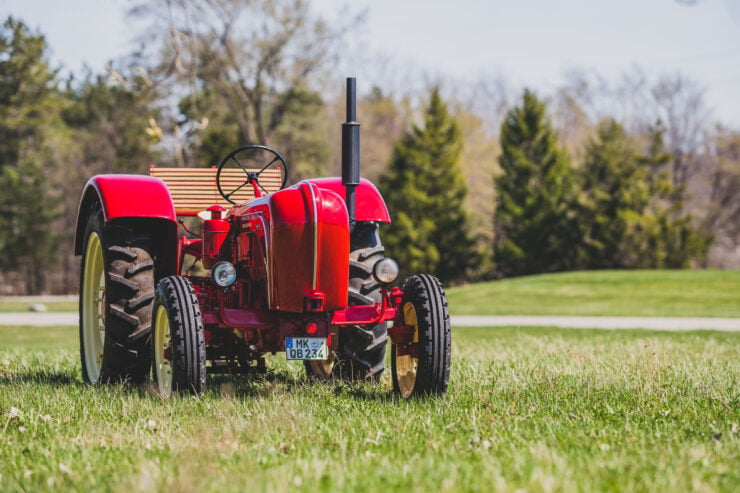 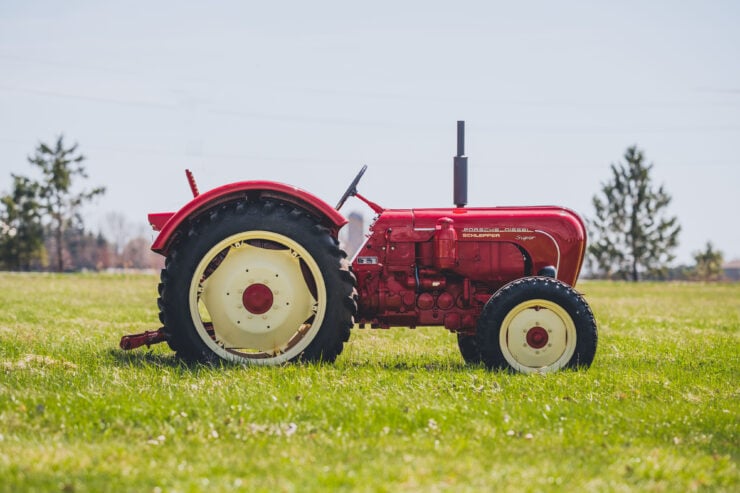 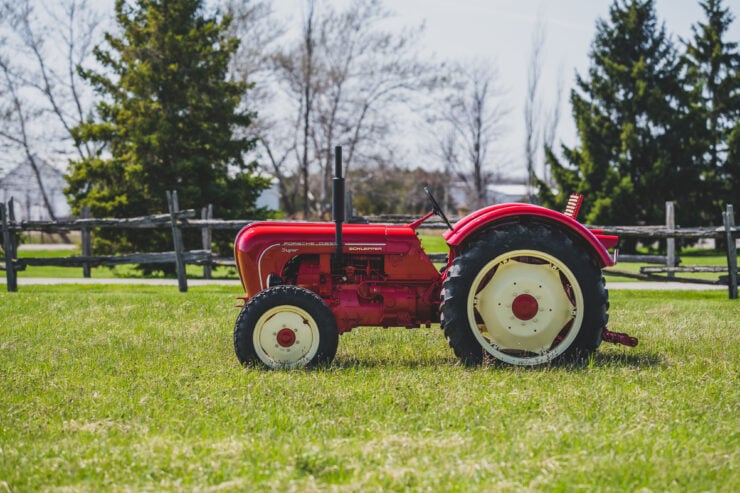 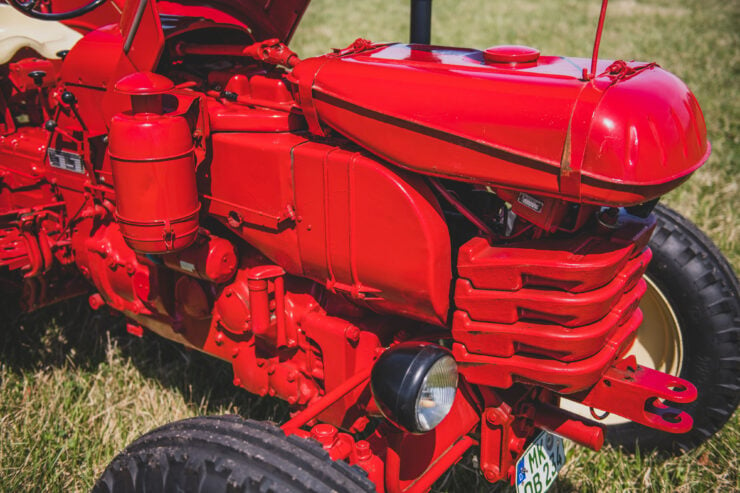 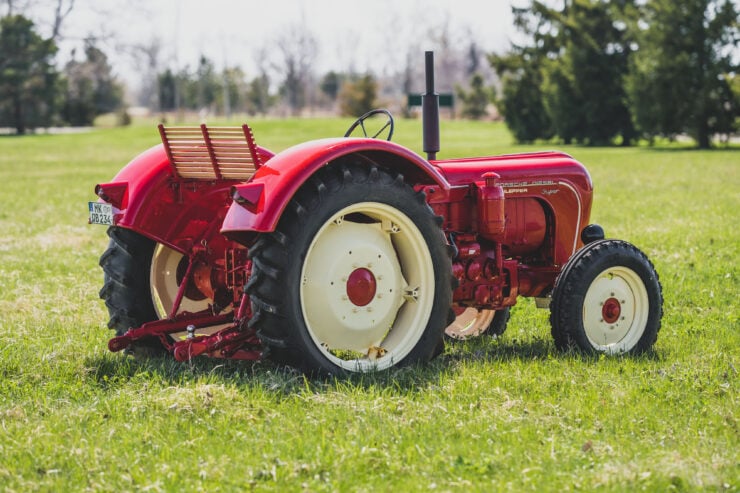 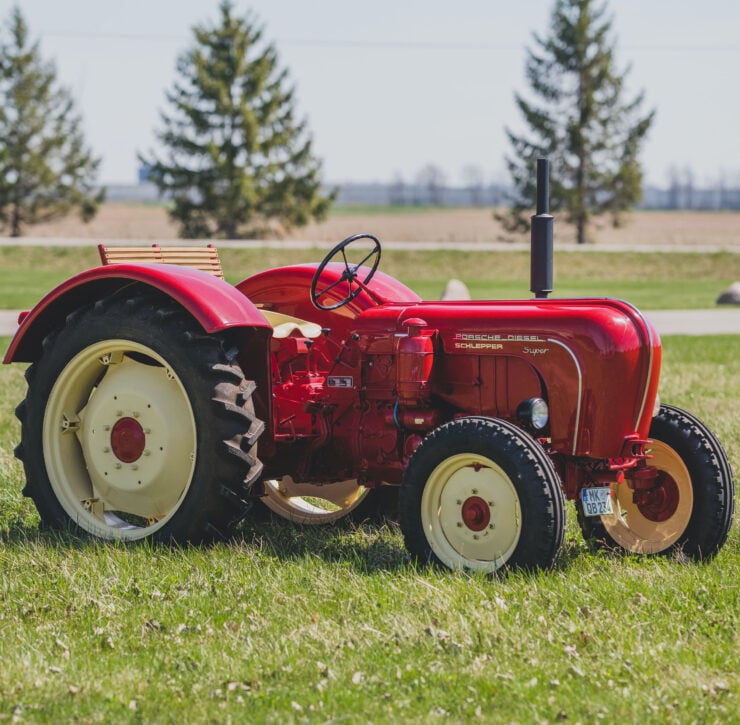