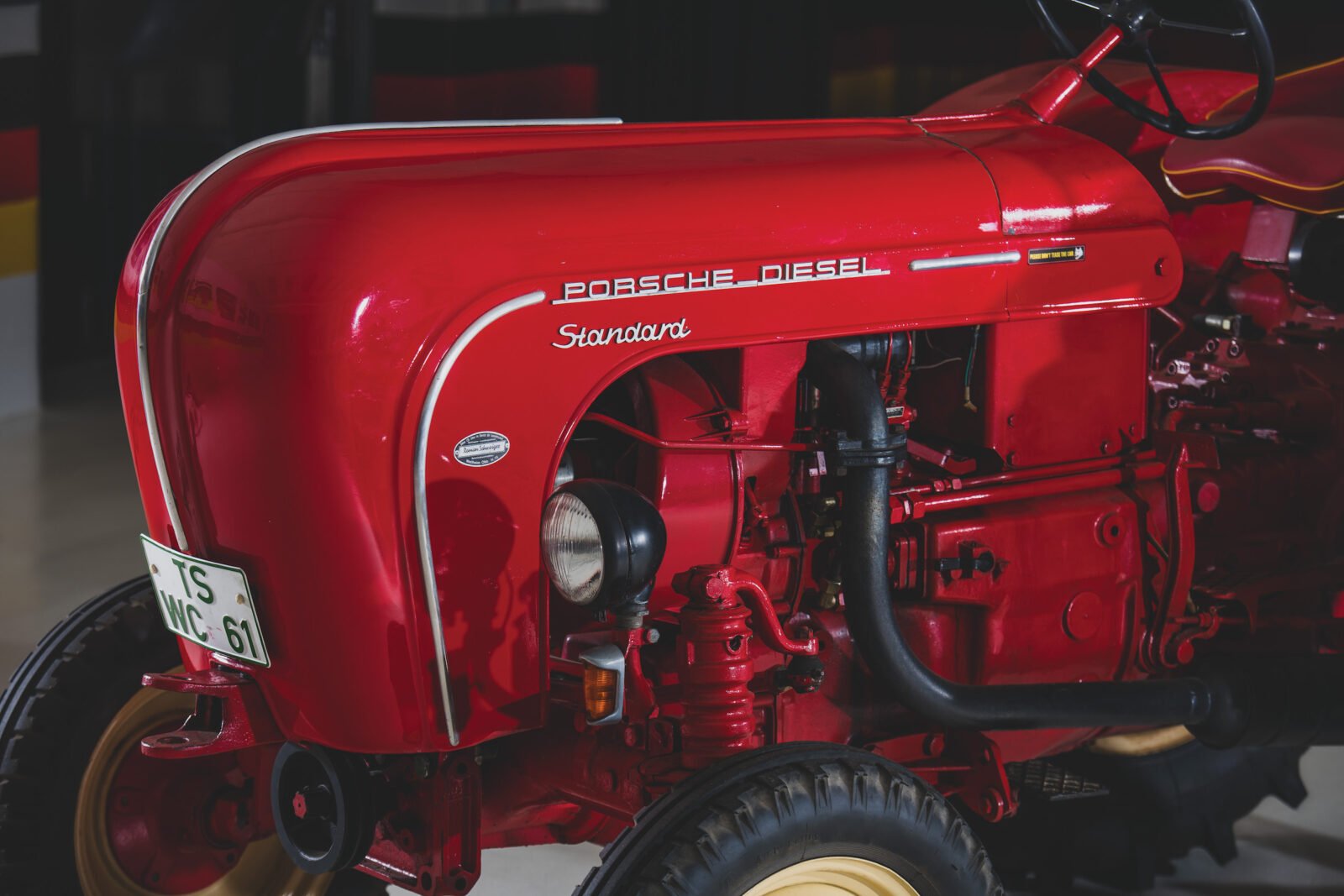 Between 1956 and 1963 over 125,000 Porsche-Diesel tractors were built in the former Zeppelin factory near Friedrichshafen on the shores of Lake Konstanz in southern Germany, near the borders of both Switzerland and Austria.

The first designs of a Porsche tractor were penned in the 1930s by Ferdinand Porsche. It was initially called the Volks-Schlepper and it was to be the agricultural sibling to the Volkswagen Beetle. The word “volks” means “people” and the word “schlepper” just means “tractor”.

As with all of his vehicles, the Ferdinand Porsche-designed tractor was exceptional. It used a hydraulic coupling between the engine and transmission to remove the issue of clutch wear and tear – a major problem faced by many tractors. 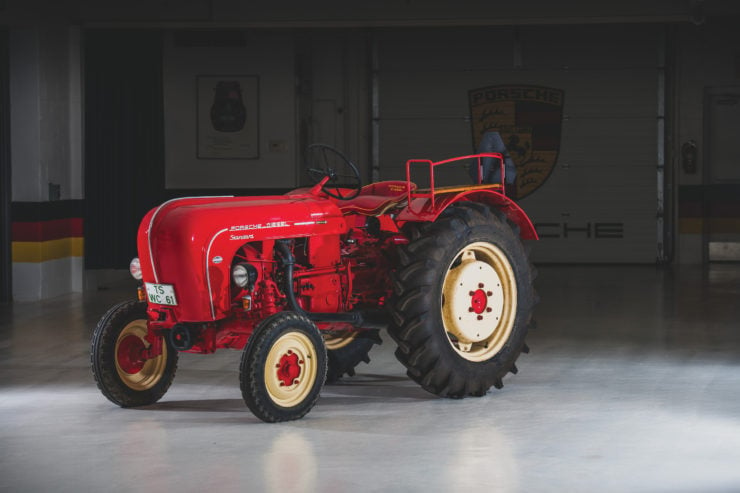 Porsche developed a diesel engine that could be either 1, 2, 3, or 4 cylinders, with each cylinder being individually removable for simple maintenance. The engine was an air-cooled design that had been created with reliability in mind, and a power takeoff was available from the front, side, and rear.

Porsche tractors weren’t produced during the war as factories were focused on the war effort. After the war the government only allocated resources to companies that had been producing tractors before the war – so the Porsche tractor design still couldn’t enter production. 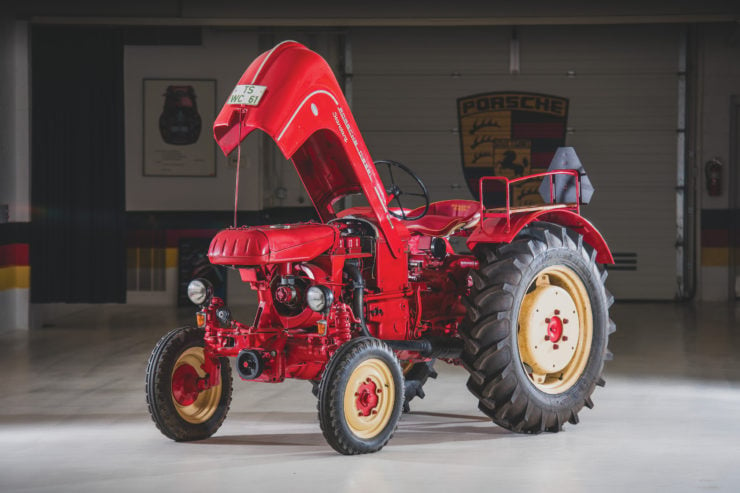 The advanced (for the era) tractors proved popular around Europe and many were sold in the United States, Canada, and further afield also. By the time production ended in 1963 there were well over a hundred thousand of the characteristically red tractors around the world – many of which have survived to the modern day.

It isn’t every day that a 1950s-era vintage Porsche comes up for sale in fantastic overall condition with a price tag in the $20-$30,000 USD range.

Of course unless you can get your hands on a Doc Brown-modified DeLorean and get yourself back to the 1990s you’re not going to find a ’50s-era Porsche road car in excellent condition for $30,000 or less. That said, one form of vintage Porsche from the mid-20th century that’s still within the realm of affordability for many of us is the series of Porsche-Diesel tractors that were built from the 1950s and into the early 1960s.

Before you say to yourself “yes but I can’t race them” – you actually can. There’s a burgeoning community of people taking their vintage Porsche tractors out and racing them, the most famous meet so far was at the Porsche Club of America Rennsport Reunion at WeatherTech Raceway Laguna Seca in California. It welcomed over 15 Porsche tractors in a special class and they raced over a somewhat shortened version of the circuit.

The Porsche tractor you see here is a “Standard” two-cylinder model from 1957. It features the famed “turbo-hydraulic coupling” and it’s offered in its original red color with primrose wheels.

It was sold initially by a farm equipment dealer in Germany named Roman Schweiger based in Weilheim, Germany. It’s early history is largely lost but we do know it ended up in the USA owned by Helmut Reiss of Laguna Beach, California.

Before selling it to the Taj Ma Garaj in 2002 he had a number of mechanical and electrical issues addressed to ensure the tractor was in good condition.

RM Sotheby’s will be offering the Porsche-Diesel Standard 208 N for sale on the 28th of September as part of the Taj Ma Garaj sale. It’s estimated to be worth between $20,000 and $30,000 USD, if you’d like to read more about it or register to bid you can click here to visit the listing. 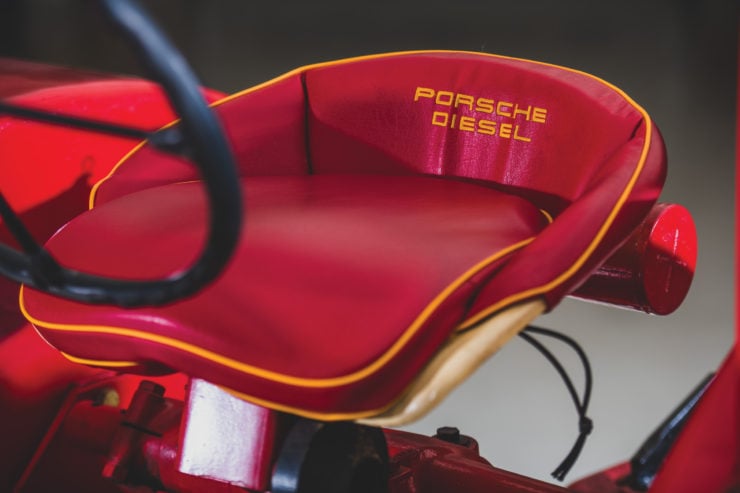 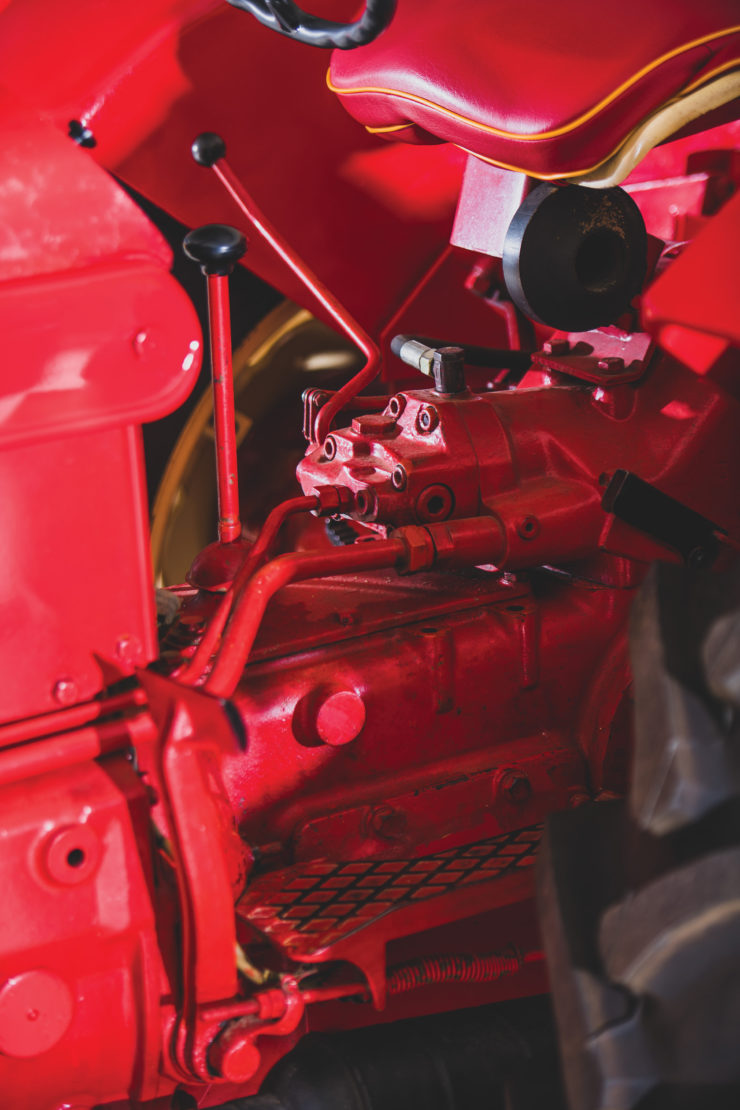 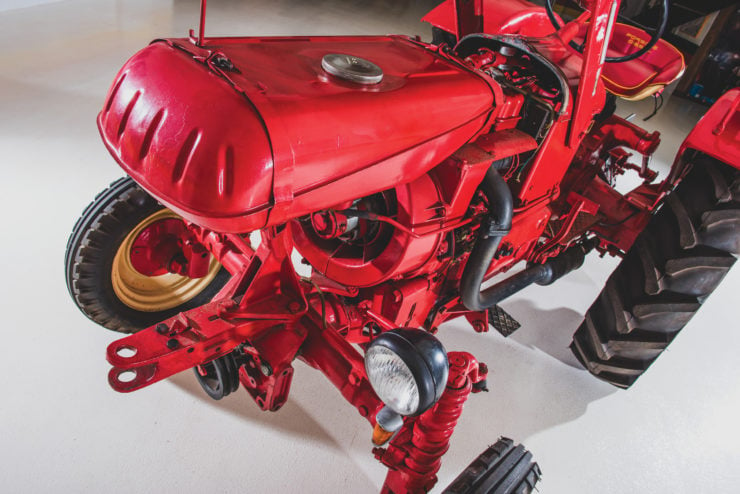 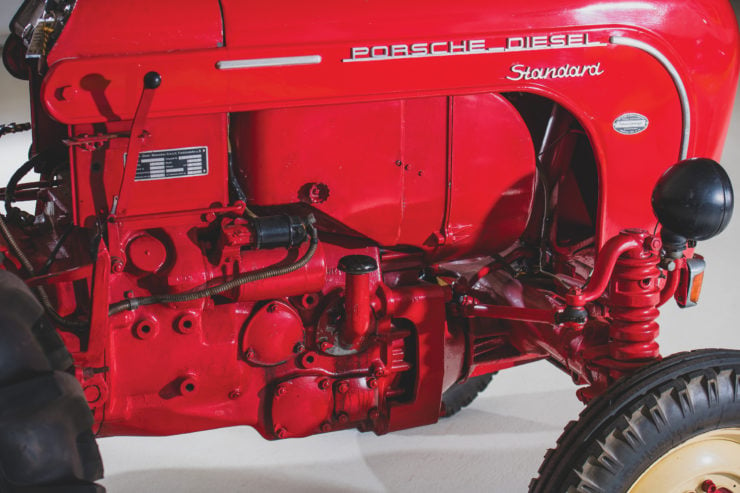 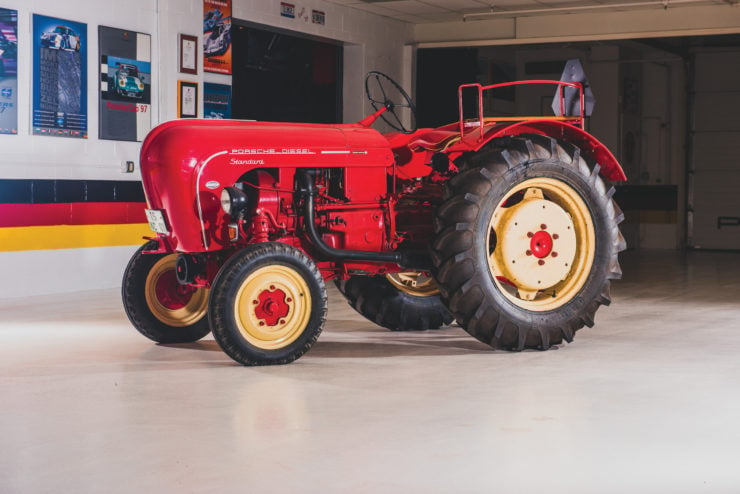 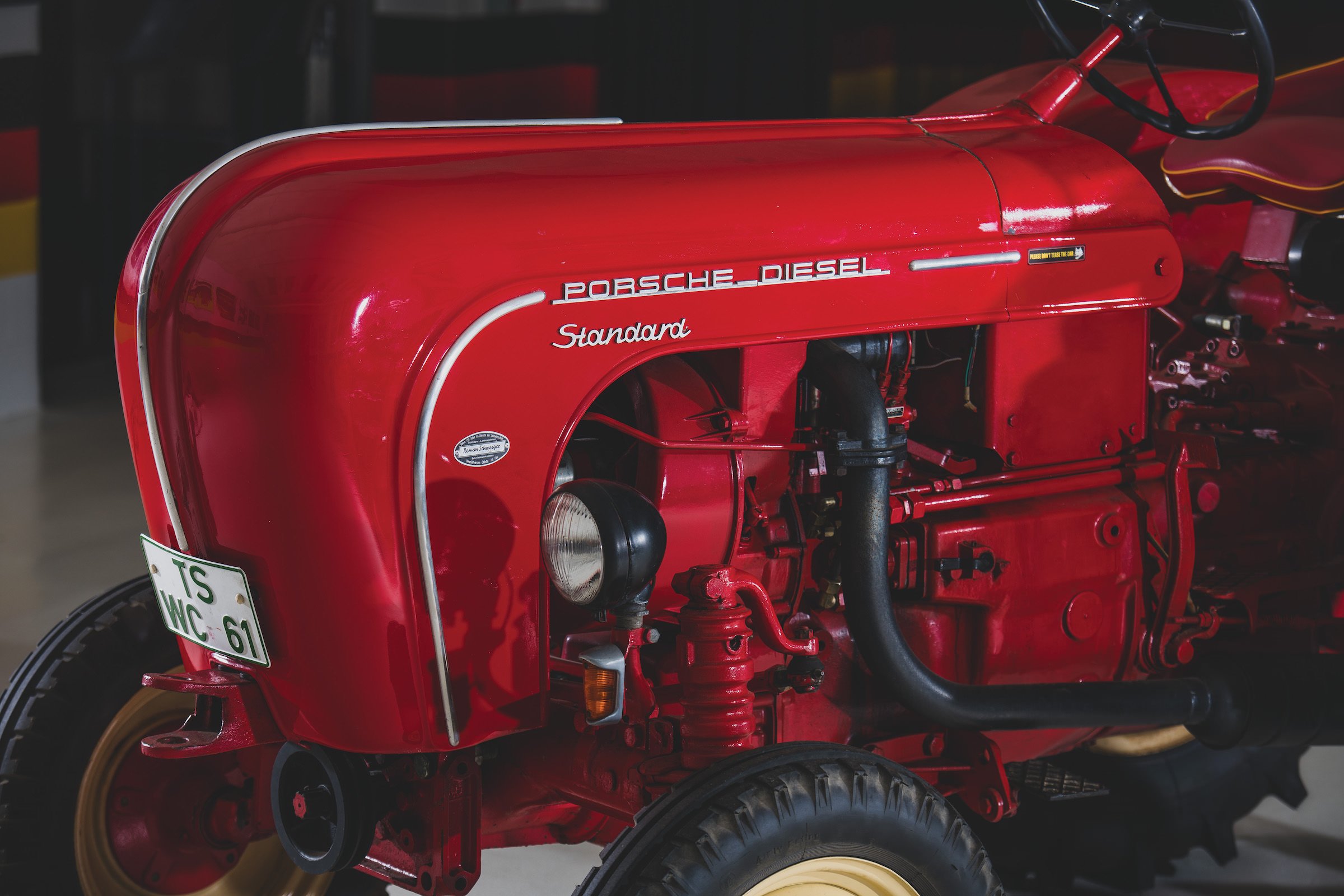