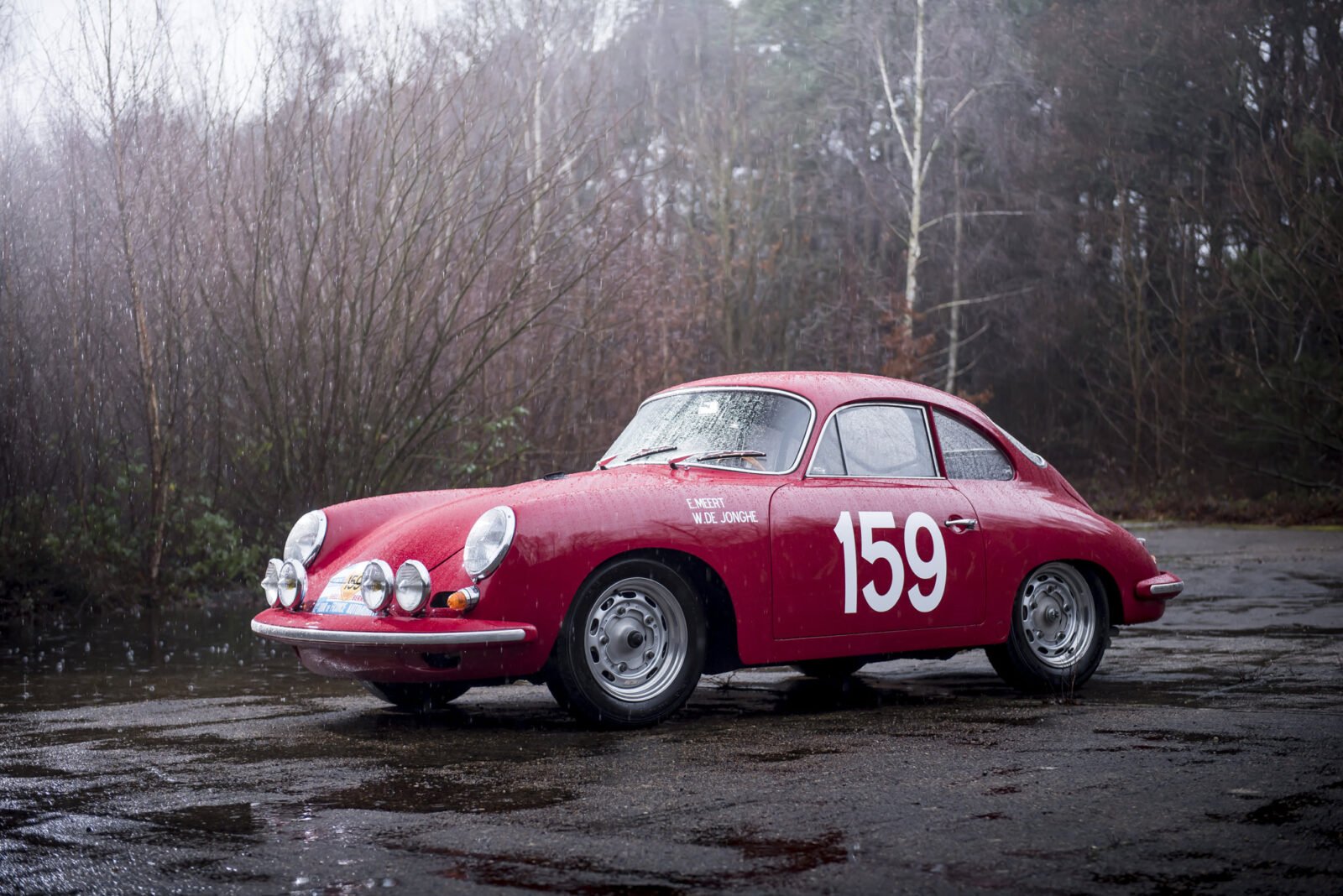 The Porsche 356 Carrera 2 GT was to be one of the final and most powerful racing iterations of the venerable model that had been largely responsible for taking Porsche from an unknown marque to a household name. Porsche had released the 356 in 1948 and although the company had made a limited number of race cars previously, the 356 would be their first production model.

The Origins of the Porsche 356

Ferdinand “Ferry” Porsche created the 356 in 1948 in the small town of Gmünd in Austria. It was hand-crafted from aluminium and interestingly, it had a mid-mounted engine rather than the rear-mounted engine the company would later become famous for.

The young company had close ties with Volkswagen, thanks to the fact that Ferry Porsche’s father had developed the Beetle 10 years earlier in 1938. The newly-minted Porsche would also use an air-cooled flat-4,  with a unitised pan and body construction. Many have pointed to the similarities in design between the Beetle and the 356 (and the later 911), which should come as no huge surprise as they were both penned by Erwin Komenda – a designer who is well-known within the automotive community but criminally neglected in the wider world of industrial design.

The initial production numbers were very low, in fact it took the new company 2 years to build 50 cars. The new Austrian sports car had been making a name for itself with some impressive performances at smaller motor races, but in 1951 the 356 took a class win at the 24 Hours of Le Man with drivers French drivers Auguste Veuillet and Edmond Mouche at the wheel.

Interest in the little Austrian car began to increase on both sides of the Atlantic, and engine development kept pushing it forward. Porsche would continue building the 356 until 1965 through 4 major iterations – Pre-A, A, B, and C. By the time production ceased, over 76,000 Porsche 356s had been built, over 10,000 had been ordered in 1964, and the model had won a long list of iconic races, including the 24 Hours of Le Mans, the 1000 Kilometres of Buenos Aires, the Mille Miglia, Targa Florio, and Carrera Panamericana. 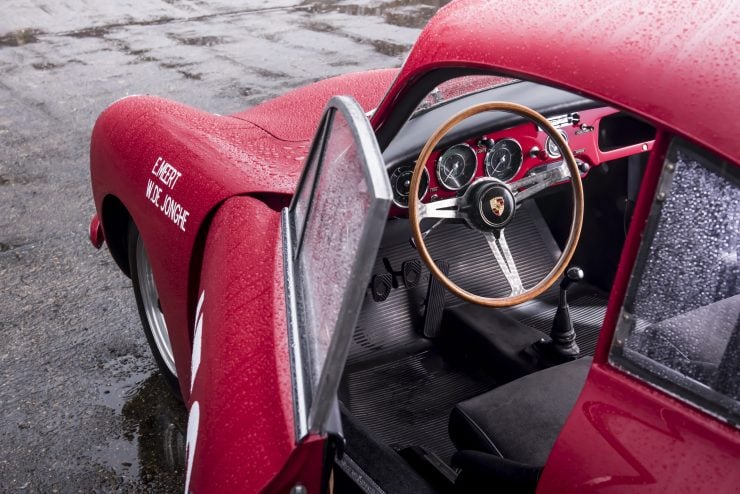 Although we often associate air-cooled engines with simplicity, the four-cam engines developed by Dr Ernst Fuhrmann were anything but. With a doctorate in machine construction with a focus on valve systems in high-speed engines, Dr Fuhrmann was a leading expert in the design of high-performance racing engines.

In the early 1950s Porsche realised their pushrod, Volkswagen-derived engine wasn’t going to cut the mustard for much longer. They assigned Fuhrmann and a small team to develop a new flat-4 capable of much higher power levels, without an increase in displacement. Once completed, this technically advanced engine featured four-cams, two on each head, all driven by bevel gears and utilising roller bearings.

Each engine required at least 120 man hours to complete due to their complexity, and it’s said that the final adjustment of the valve timing could take 8 to 10 hours. Depending on their displacement and final configuration, these four-cam engines could produce anything from 110 hp up to 180 hp or more.

One of the select few Porsches to be fitted with the four-cam engine was the Carrera GT, a lightened car designed for performance, and fitted with the larger 1587cc four-cam Type 692 engine. From 1962 onwards, the Carrera 2 GT would supplant the original – with that “2” referencing either the new 2 litre engine, or the fact that it was the second iteration of the model, depending on who you talk to.

With a displacement of 1996 cc, this new engine offered a significant step up over its 1.6 litre forebear, and Porsche entered two 356 Carrera 2 GTs at Le Mans in 1962. Many of the 16 examples that were built had their power taken from the 130 bhp range up to 155 or even 180 bhp thanks to the addition of Weber twin-choke carburettors, hotter cams, and a higher compression ratio.

Weight was kept to an absolute minimum with the Carrera 2 GT, aluminium panels were used extensively, perspex windows replaced glass, the interiors were stripped to little more than  a seat and a steering wheel – they even removed the glove box. The final weight is approximately 850 kilograms

Perhaps the rarest of the already scarce Carrera 2 GTs is the T6B, no one is entirely sure how many were made but it’s thought the number is between 2 and 5. They were built in 1963, just a year before the new Porsche 904 would take over many of the competition duties. The car you see here was sold new to Belgian driver Eddy Meert, who would campaign it in the 1963 Tour de France – a 9 day event featuring races on 9 circuits, with an additional 7 hill climbs, then a 5700 kilometre rally. In 1964, Meert would dominate the Grand Tourisme class at the 12 Heures de Huy as number 19, and take the class win.

After an impressive life in the hands of a number of private owners, the T6B 356 Carrera 2 GT is now being offered for sale through Fiskens, and it’s likely to be of significant interest to both the Porsche collector community, and the wider classic car community. If you’d like to read more about the car or enquire after it, you can click here to view the listing. 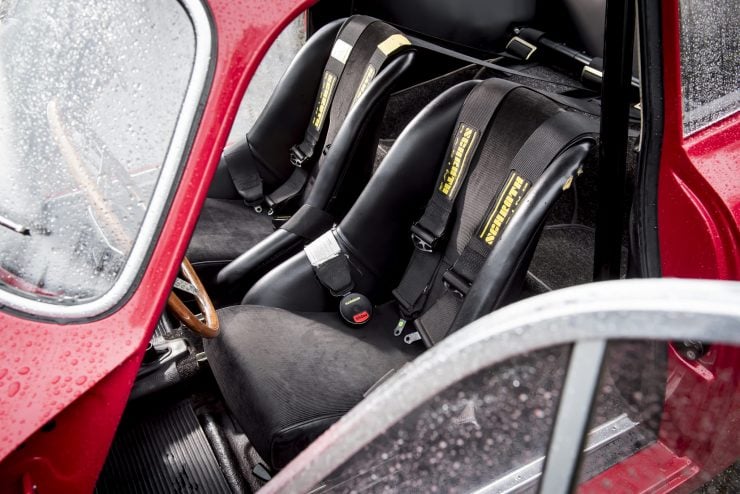 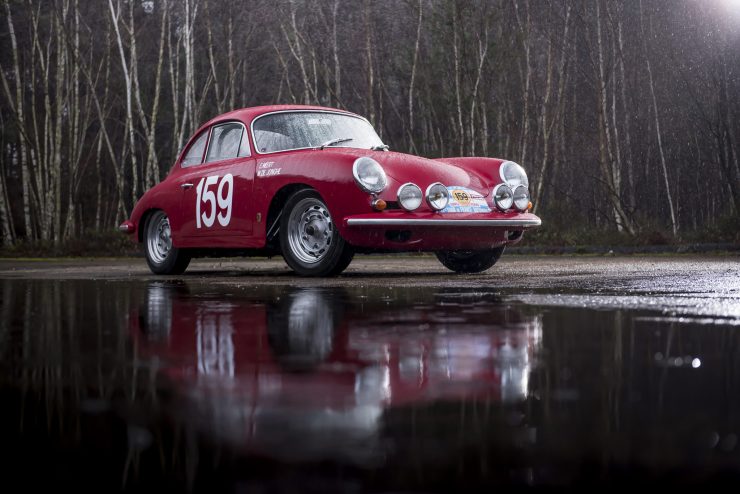 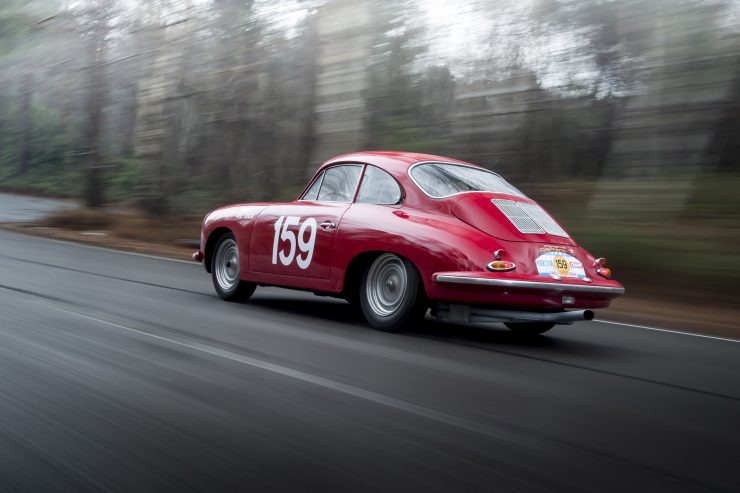 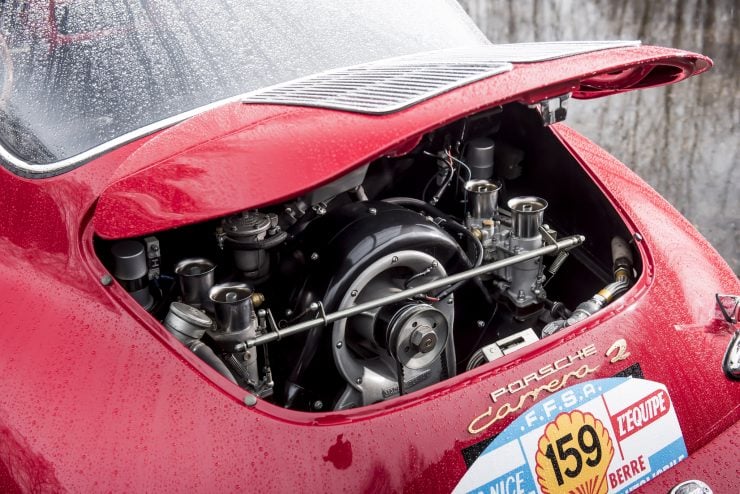 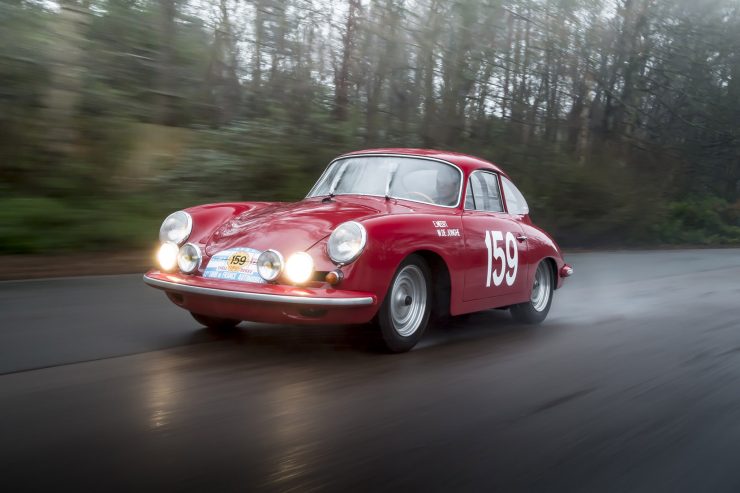 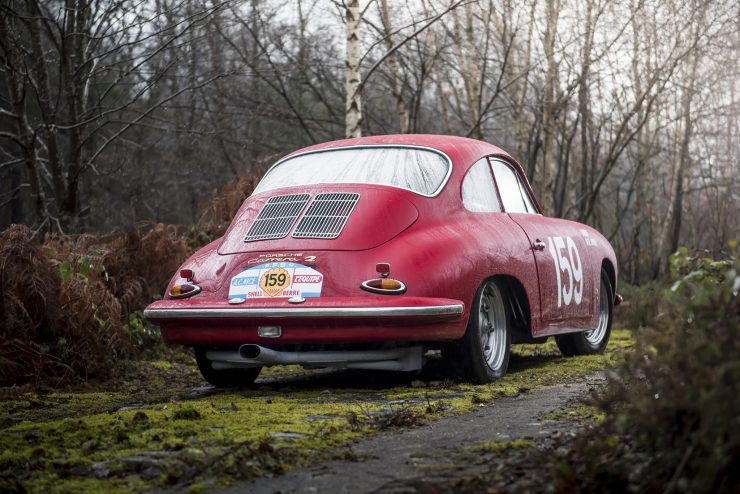 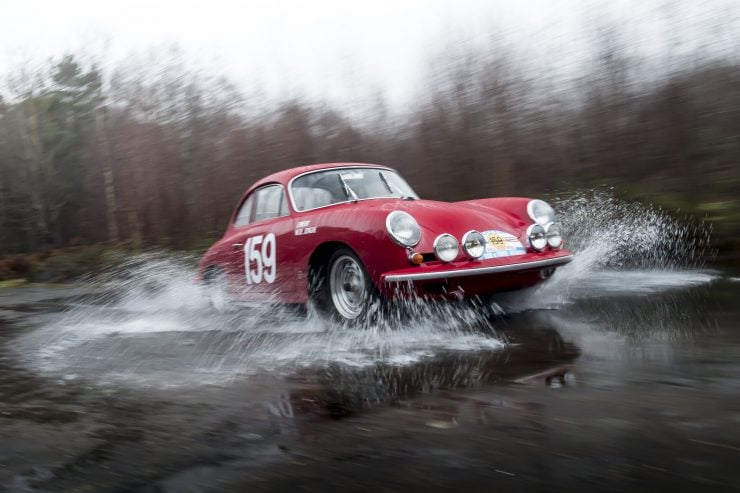 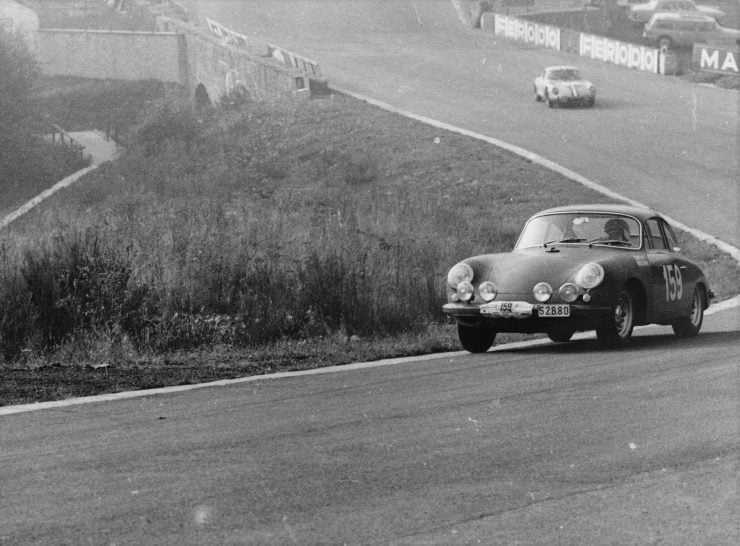 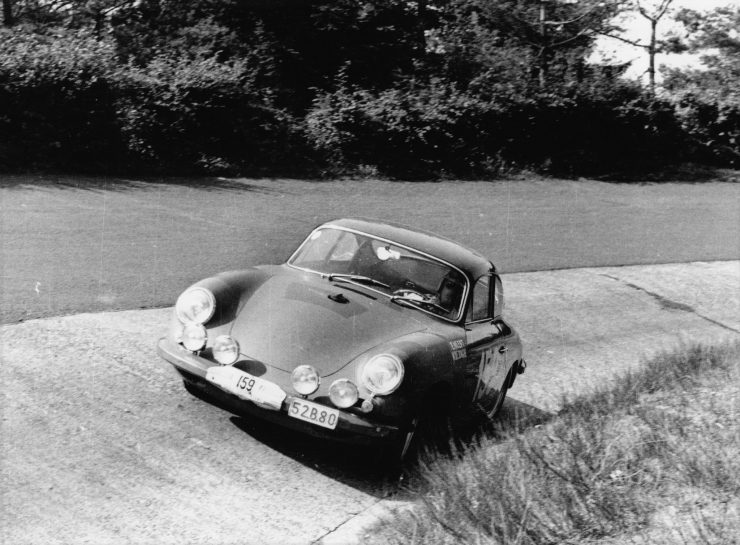 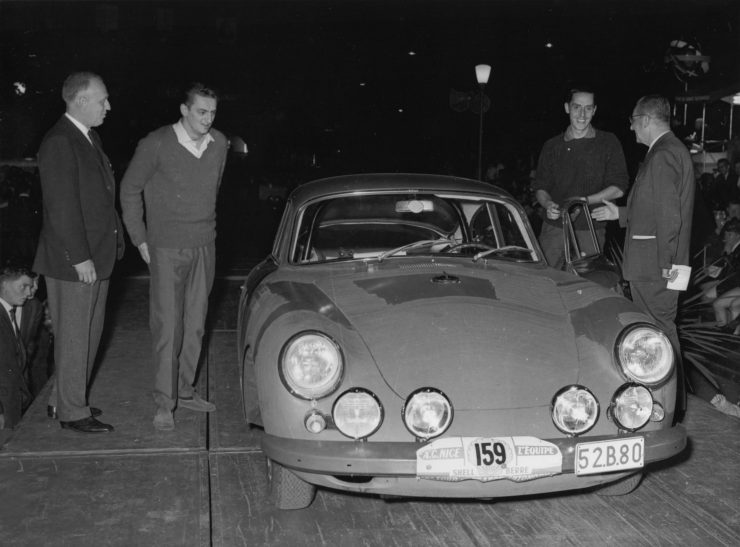 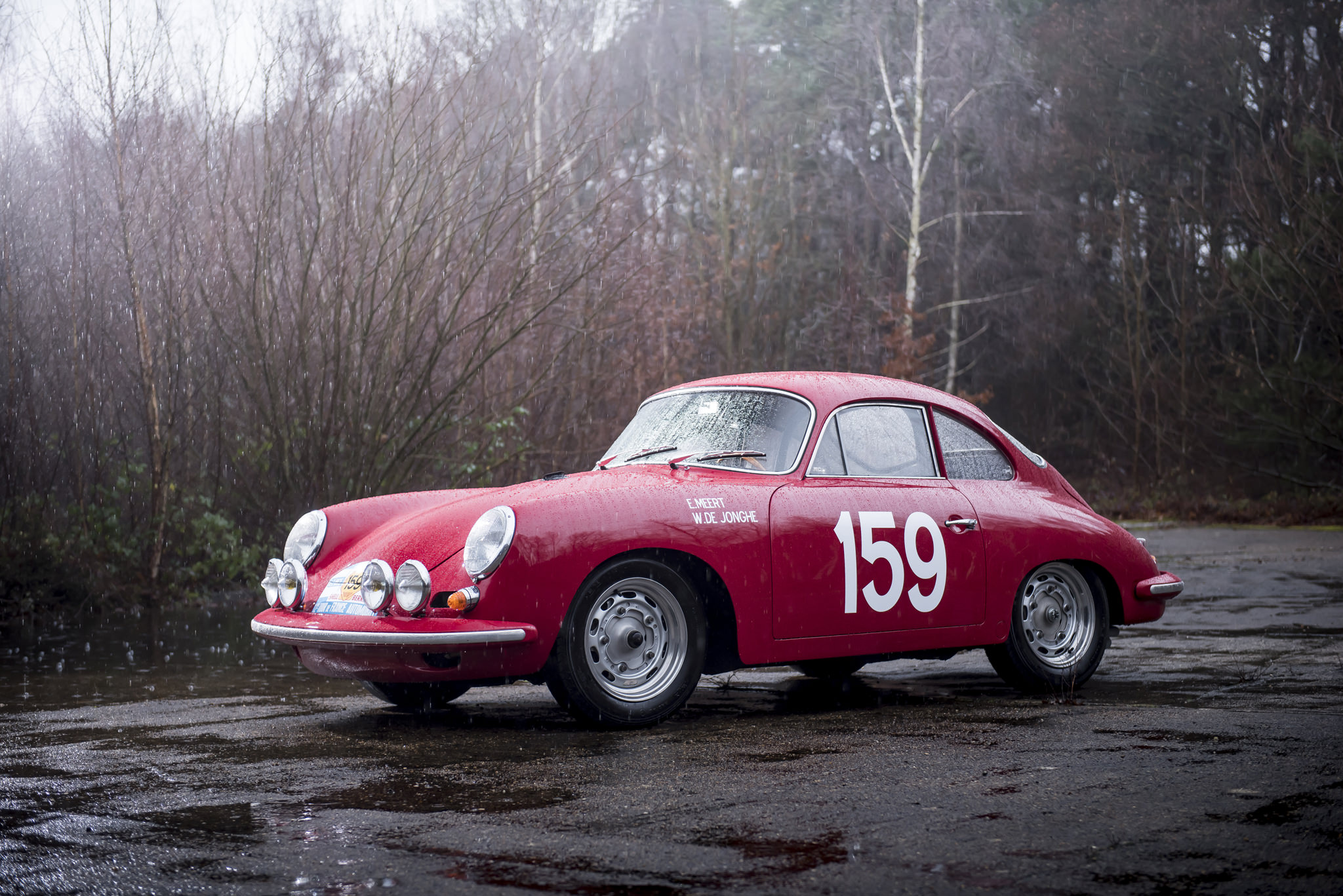