Traditional wooden kayaks are a rare thing to find nowadays, the much more common, soulless, moulded plastic designs are cheap to make and arrive in shipping containers from China for sale at sporting goods stores around the country, to be sold to people for whom price outweighs craftsmanship.

It doesn’t have to be this way though, a small company founded by a man called John Lockwood sells beautifully designed, wooden kayak kits designed to be built in nothing more than a normally equipped garage by a first time builder.

John Lockwood founded Pygmy Boats in 1986 after having spent years designing state-of-the-art 50,000 tonne container ships, his dream was always to design and build the most beautiful kayaks in the world and after looking through his catalogue, I think he’s done it.

This model is called the Pinguino 145, it’s a 14.4 foot, 36lb wooden kayak built to be used in the ocean, lakes, rivers and white water.

Pygmy Boats sell it as a complete kit here and it’s designed to take a couple of weekends to build, it takes less time if you have kids or friends helping and much, much more time if you do it by yourself with a cooler full of beer.

Check out the Pinguino 145 Kayak here. 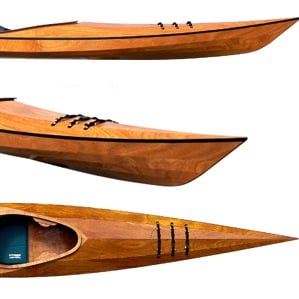