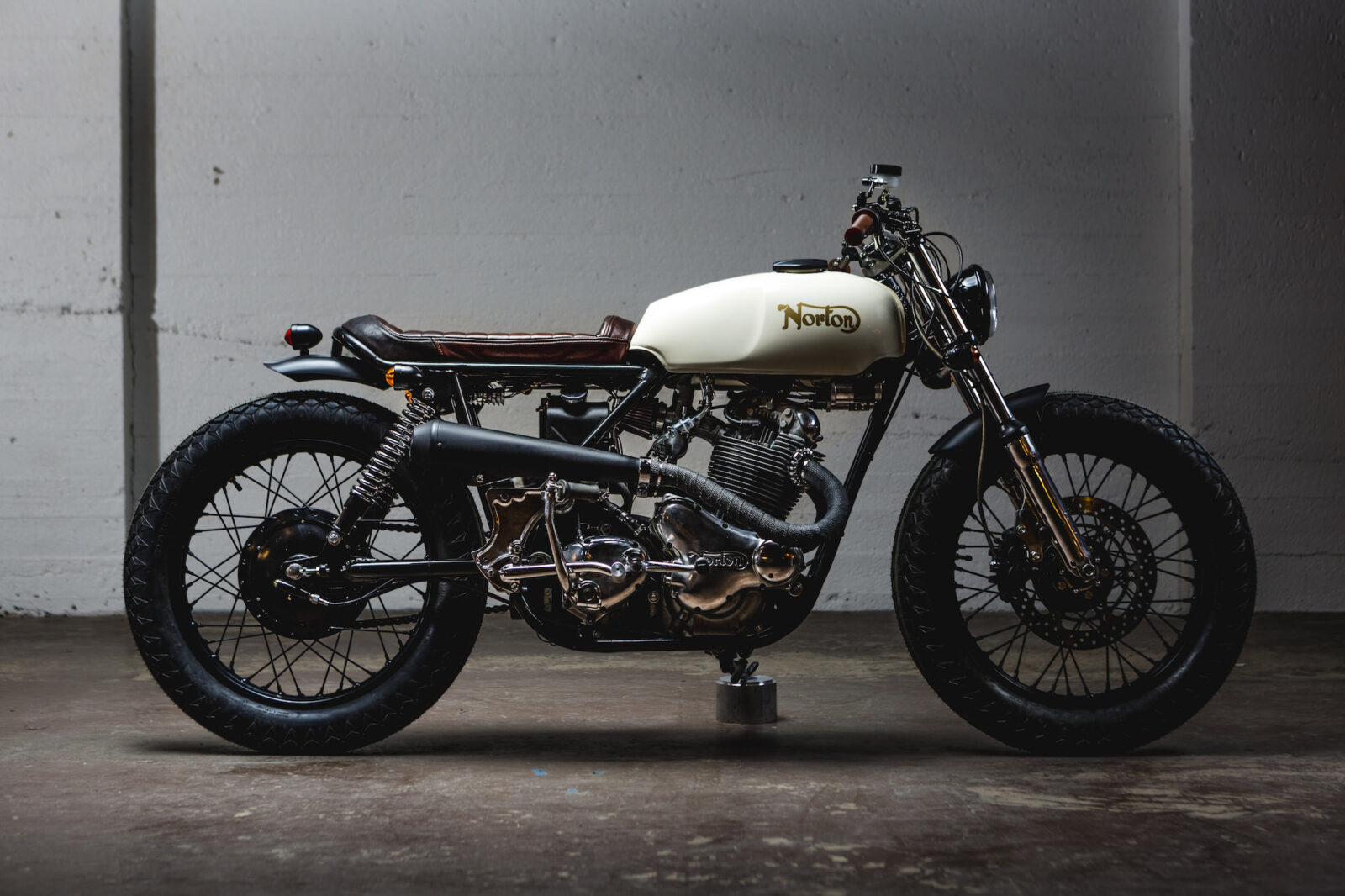 The Norton Commando is a motorcycle that I have a lot of time for, many consider it one of the greatest motorcycles of all time and I’d be inclined to agree pretty enthusiastically.

Originally introduced in 1967, the Commando won worldwide acclaim that continues to this day, it won the coveted Motor Cycle News “Machine of the Year” award for 5 straight years from ’68 to ’72 – staving of stiff competition from the new generation of motorcycles coming out of Japan.

The custom Commando tracker you see here is the work of Federal Moto, a relatively new Canadian custom motorcycle workshop based in Edmonton, Alberta and run by Justin Benson, Randy Venhuis, Shaun Brandt, and Kyle Nichols.

The expansively detailed write up the team at Federal Moto did for this bike is so good I’ve decided to post it here unedited. It covers every aspect of the build from start to finish and should interest those of you who want to know exactly what goes into building a custom motorcycle to this level.

So depending on the time of day in your part of the world, go make yourself a coffee or open a beer, then scroll down and have a read.

“We found this 1974 Norton Commando 850 on a farm in Rimbey, Alberta. It ran, barely, and had a ton of attitude. We wanted to create a surf style tracker that you could ride around the city, or cruise through the rockies all the way to the coast. We only had one condition: maintain the soul of the classic design and feel that Norton had built 40 years ago. We made some major design changes to the shape and feel of the bike, but the spirit is all still there. We can only hope that the employees at Norton would be fighting each other to take it for a spin if it rolled onto the factory floor.

We began by taking the bike down to the frame. Norton Commandos have a very thick centre tube that slants downward towards the tail of the bike, making it very difficult create the perfect line we wanted from headlight to taillight. First step was cutting the rear section of the centre tube out and re-shaping the frame to have one clean line. It took some engineering, but we’ve welded and formed the frame to be just as strong as the original. After that we shortened the frame by 18 inches in order to sit just in front of the centre of the rear wheel, and shaped a new rear hoop. This was the beginning of tracker shape we were going after. 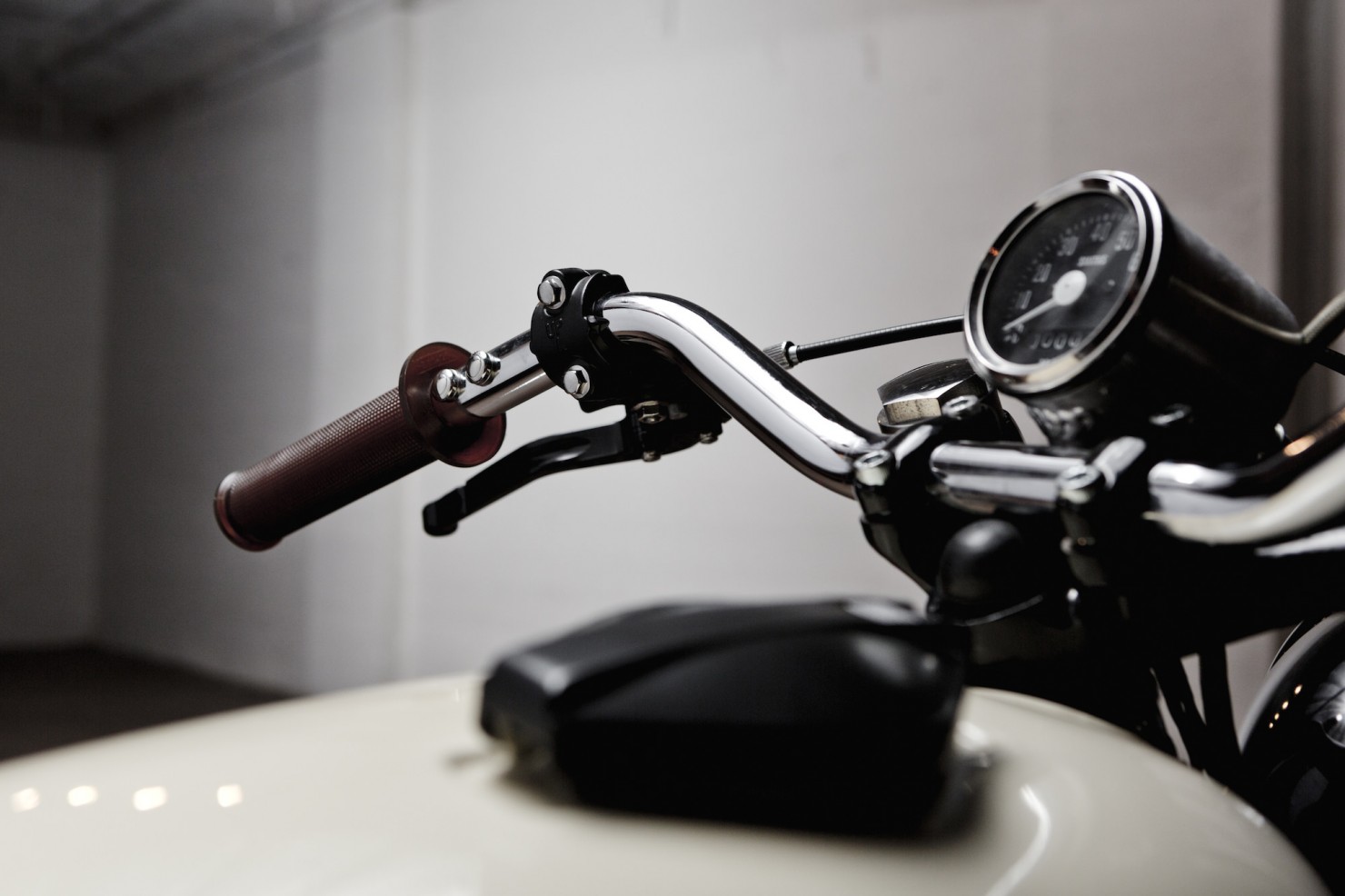 Once we had the frame shape settled, we got the wheels back on to gauge how beefy we could go with tires. We settled on 2x19inch Coker Diamond Tread tires that truly captured the era of the bike.

Once we had the shape and height of the bike down, we began chopping off every piece of excess from the frame and the original parts. This included all tabs, oil tank mounts, original fender mounts, centre stand, rear foot peg mounts, chain guard, battery box; anything that didn’t make the bike run. We cut nearly 30 lbs of weight. Before sending the frame to powder coating, we mounted brackets for our 71’ Norton oil tank, formed our seat pan, and machined mounting brackets for the fenders, lights, exhaust, and ignition.

Any original parts that were salvageable were sanded and polished in-house, restoring them to their original state. Any Norton parts that we needed to replace, were obtained through local British bike guru John Oland. This build would not have been possible without Johns unmatched willingness to share his knowledge of vintage motorcycles. The guy is a legend.

The engine itself is all original, aside from an electronic ignition. We pulled it completely apart and inspected, cleaned and polished everything, got the valves dialed in, bored the pistons, and replaced the piston rings. Well worth it considering it’s got more compression than an industrial trash compactor. 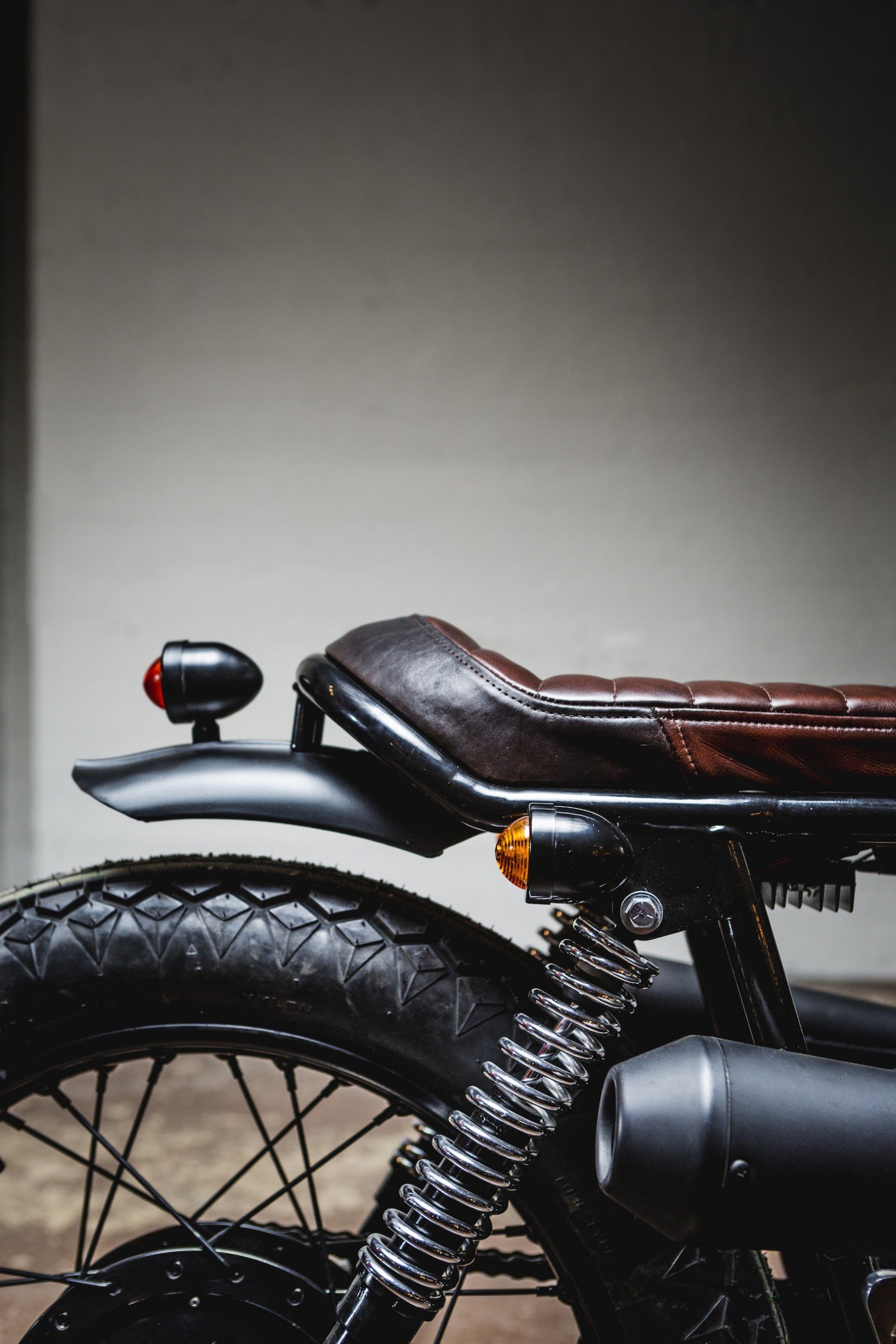 Once we had the frame and wheels back from powder coating, we began assembly, and the detail work that makes The Ace the bike that it is. We got some mid 50’s Triumph Fenders from a junk pile, chopped them up, shaped them, and re-finished the paint matte black. For exhaust, we purchased 71’ Norton Commando SS pipes and chopped about 12 inches off of them before wrapping them and attaching 17” Reverse Megaphone cone exhaust from Modern Motorcycle Company out of Australia.

For lights, we went with 4 bullet signals and a bullet brake light, finishing it off with a 5 ¾ inch black headlight, substantially lowered to keep our line. These were all wired through the new wiring harness we created and hooked up to a new Antigravity 4 cell battery tucked under the seat. We got rid of the tachometer and replaced the speedometer with a mini version of the Smiths speedometer that can be seen on many vintage british bikes. The speedo housing was machined in house.

For switches, we got rid of everything original and drilled out the bars to install 12mm push buttons for the signals and horn, cleaning up the front end substantially. We then drilled a hole in the headlight housing and installed an on/off switch so that the 4 cell battery had enough power to kick-start the bike (as opposed to having the headlight on when the key is turned on). All of this was brought together with a BSA A10/A65 Low handlebar, sticking to the bikes British roots. Other final touches at this stage included 1970’s Tommaselli Natural gum rubber grips, ordered direct from the factory in Italy, and simple footpegs machined in house. We kept the original rear brake and replaced the front with a Tokico 2 Piston front brake and Katana 750 Rotor. We also machined a new bracket off of the forks to mount the new brake assembly.

The final pieces were the gas tank and seat. We designed a 2 tone italian leather seat, sewn to perfection by local upholster Tyler Wheeler, keeping the transition seam angled in-line with the frame piece that sits below it. For the tank, we sandblasted it, fixed all the dents and repainted it off-white with an original gold vinyl Norton logo. Last but not least, we sanded the crud off of the gas cap and coated it flat black to pop off the tank.

In the end, we could not be happier with our first build. We’re extremely excited to continue creating functional, one-of-a-kind machines for passionate riders.” 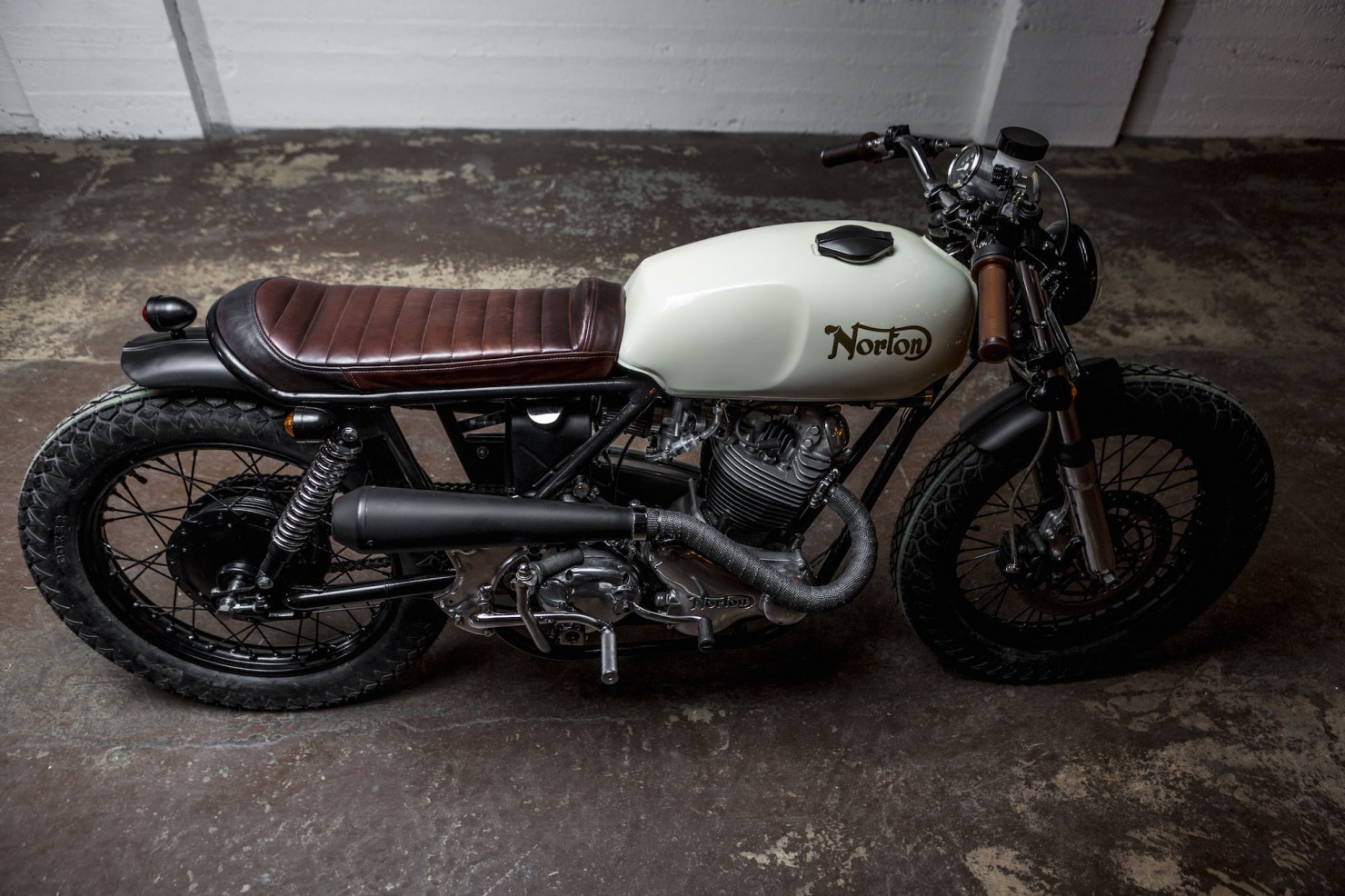 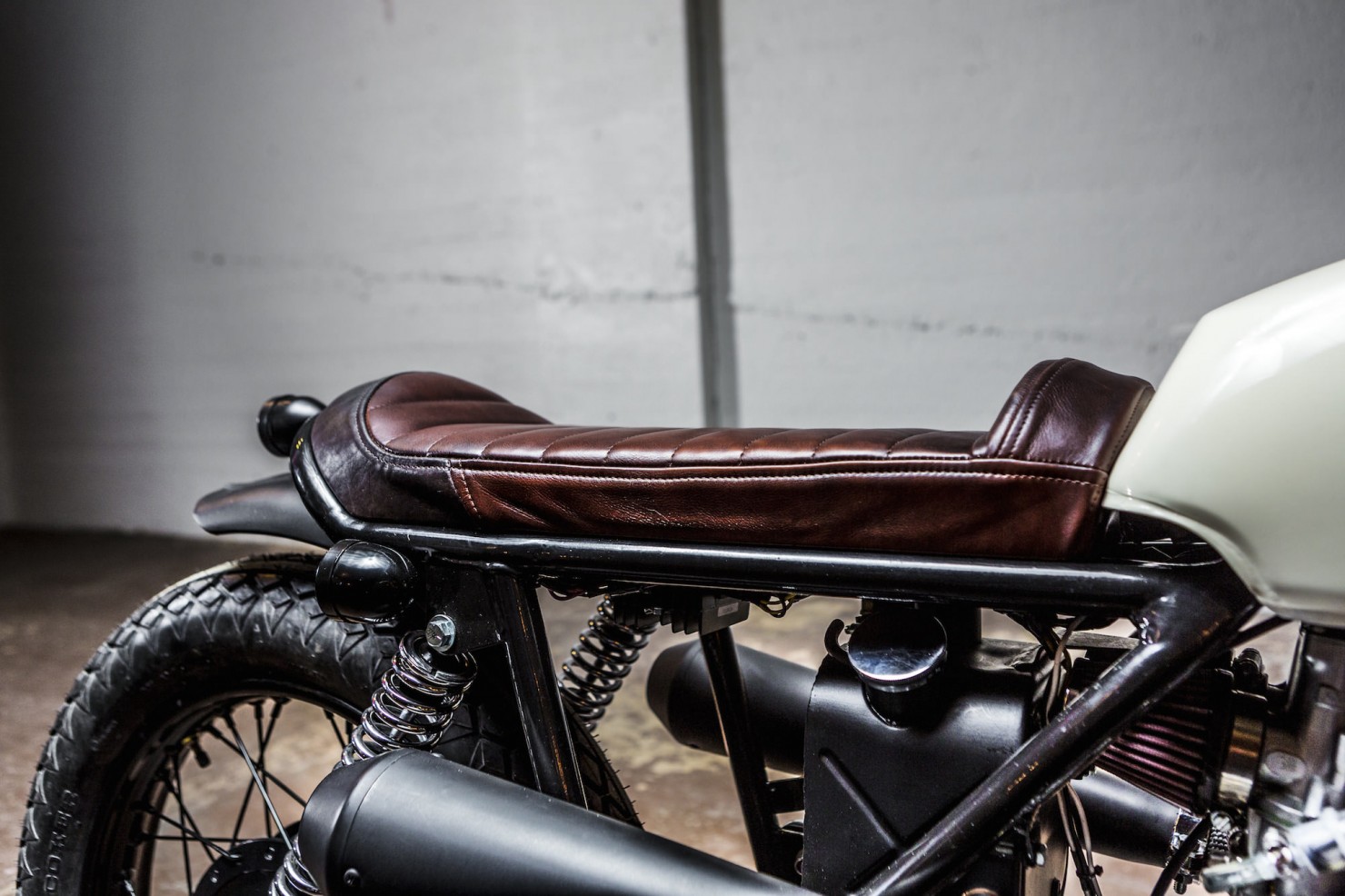 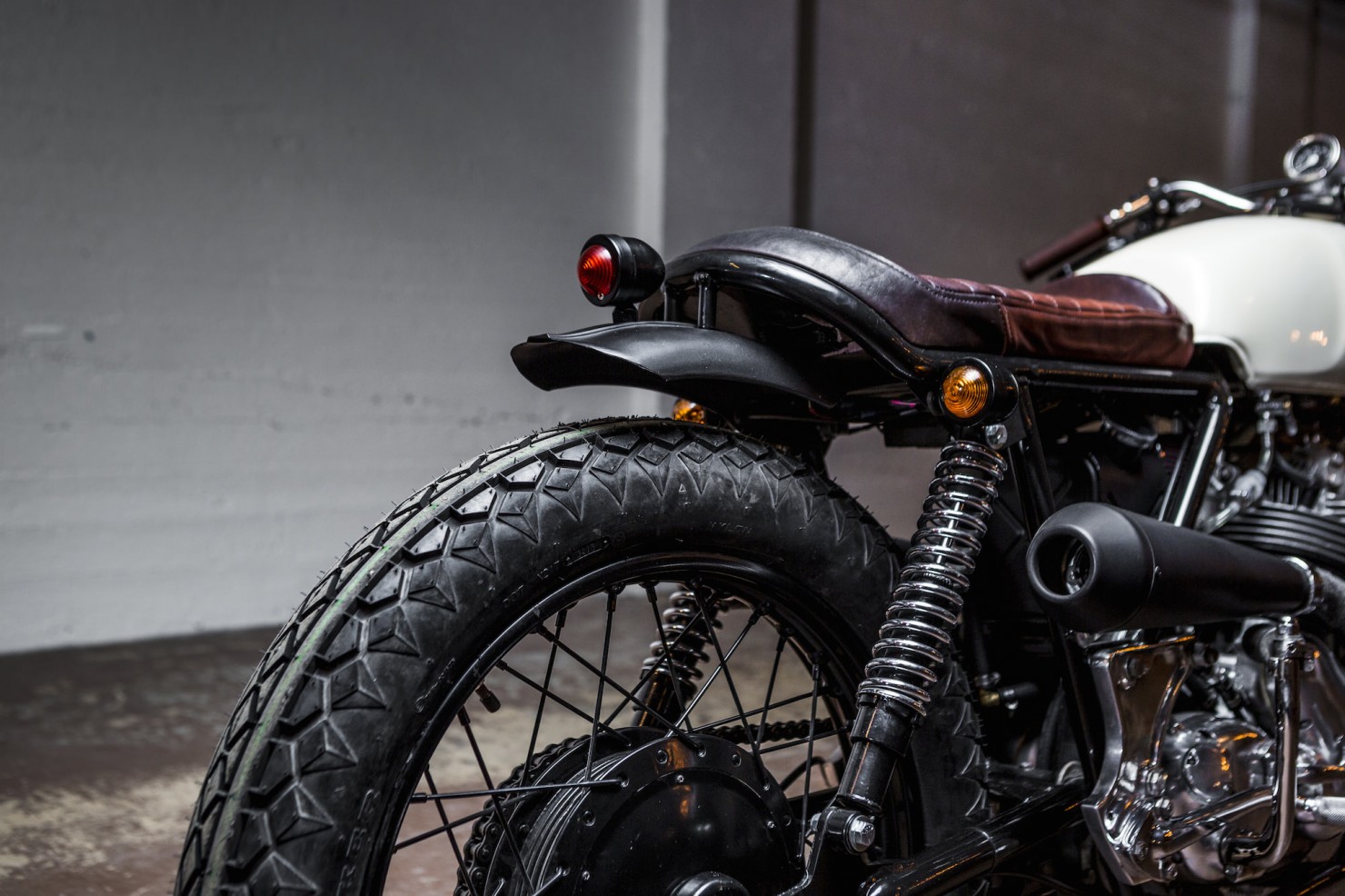 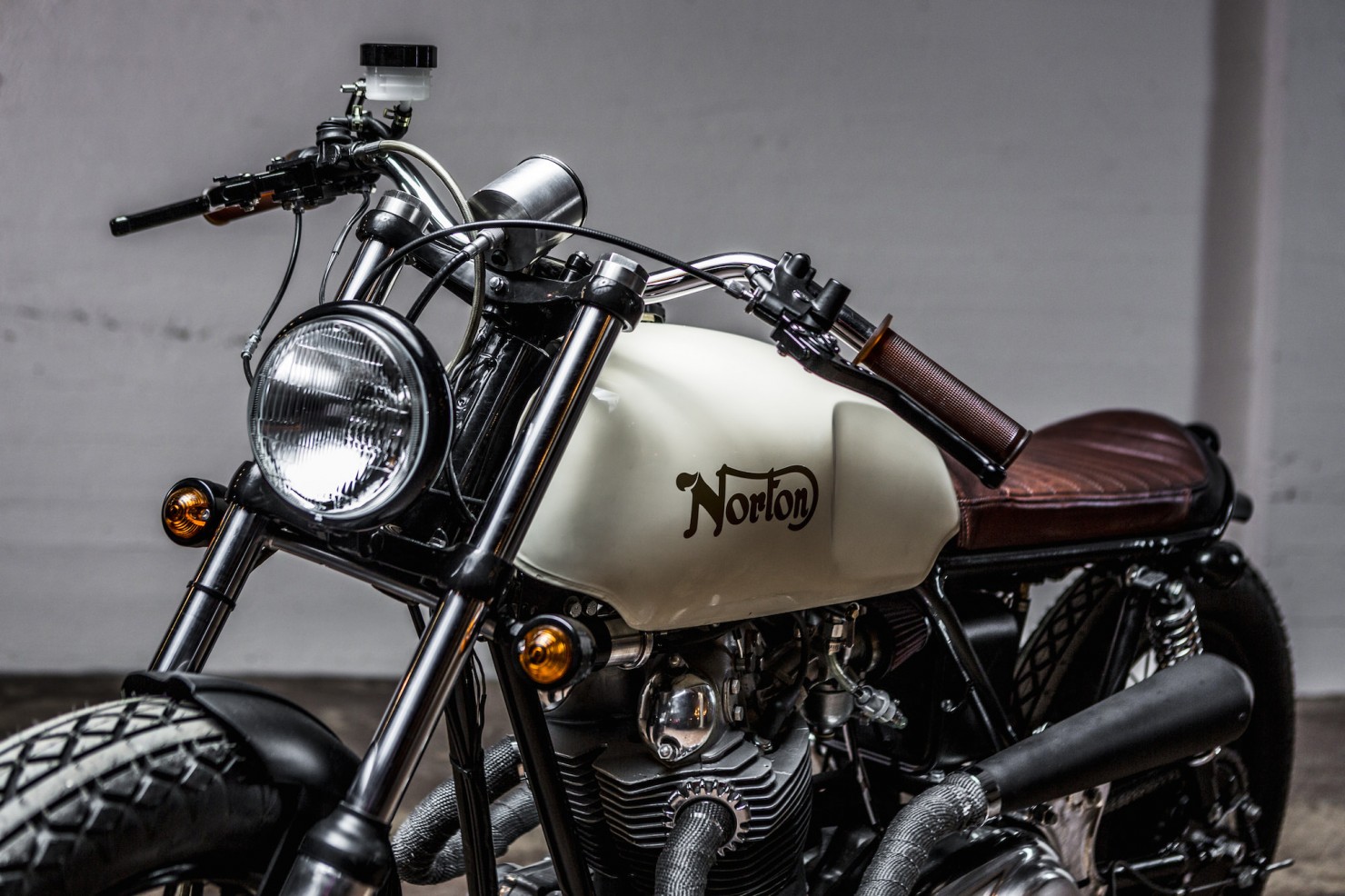 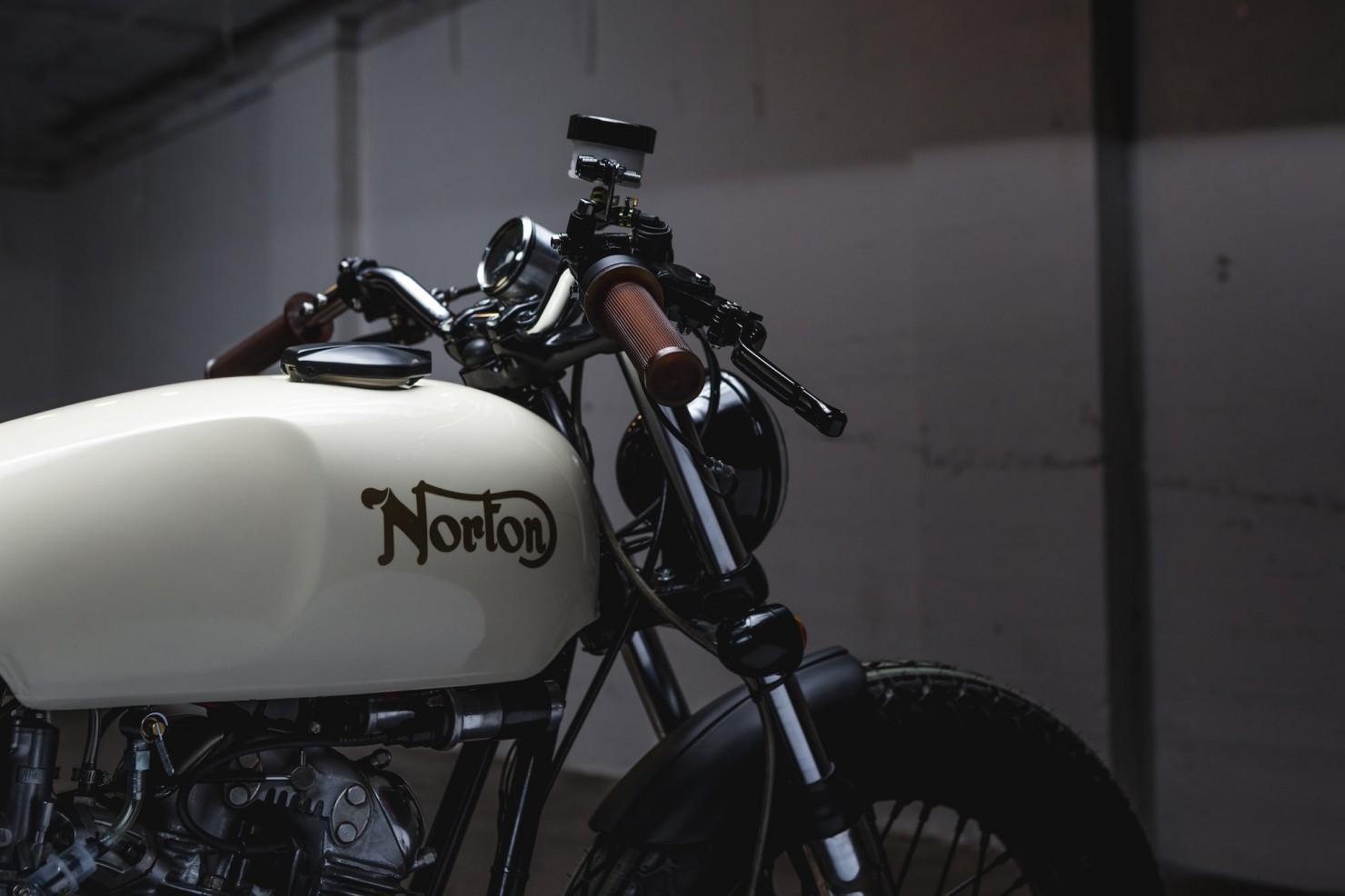 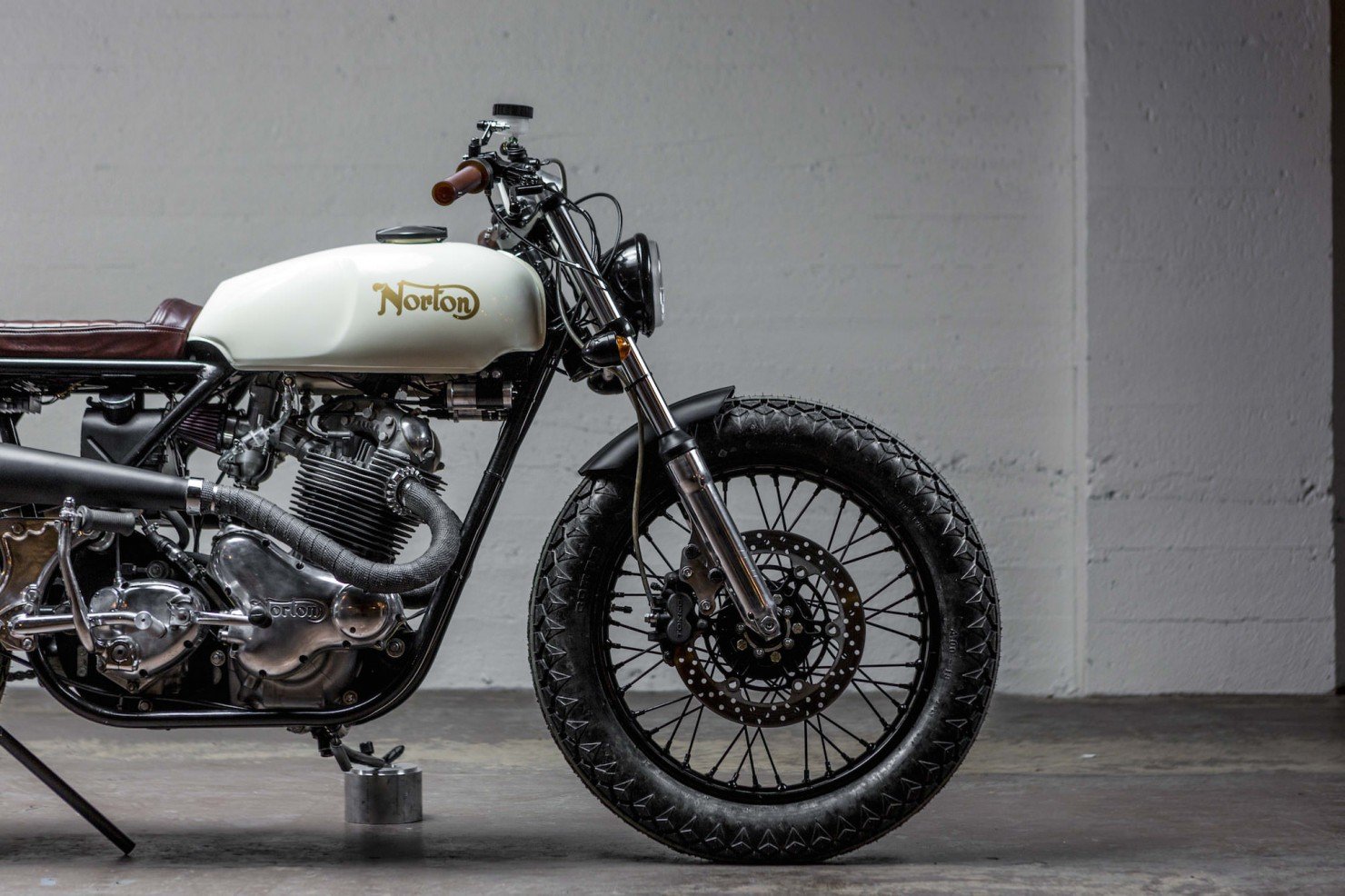 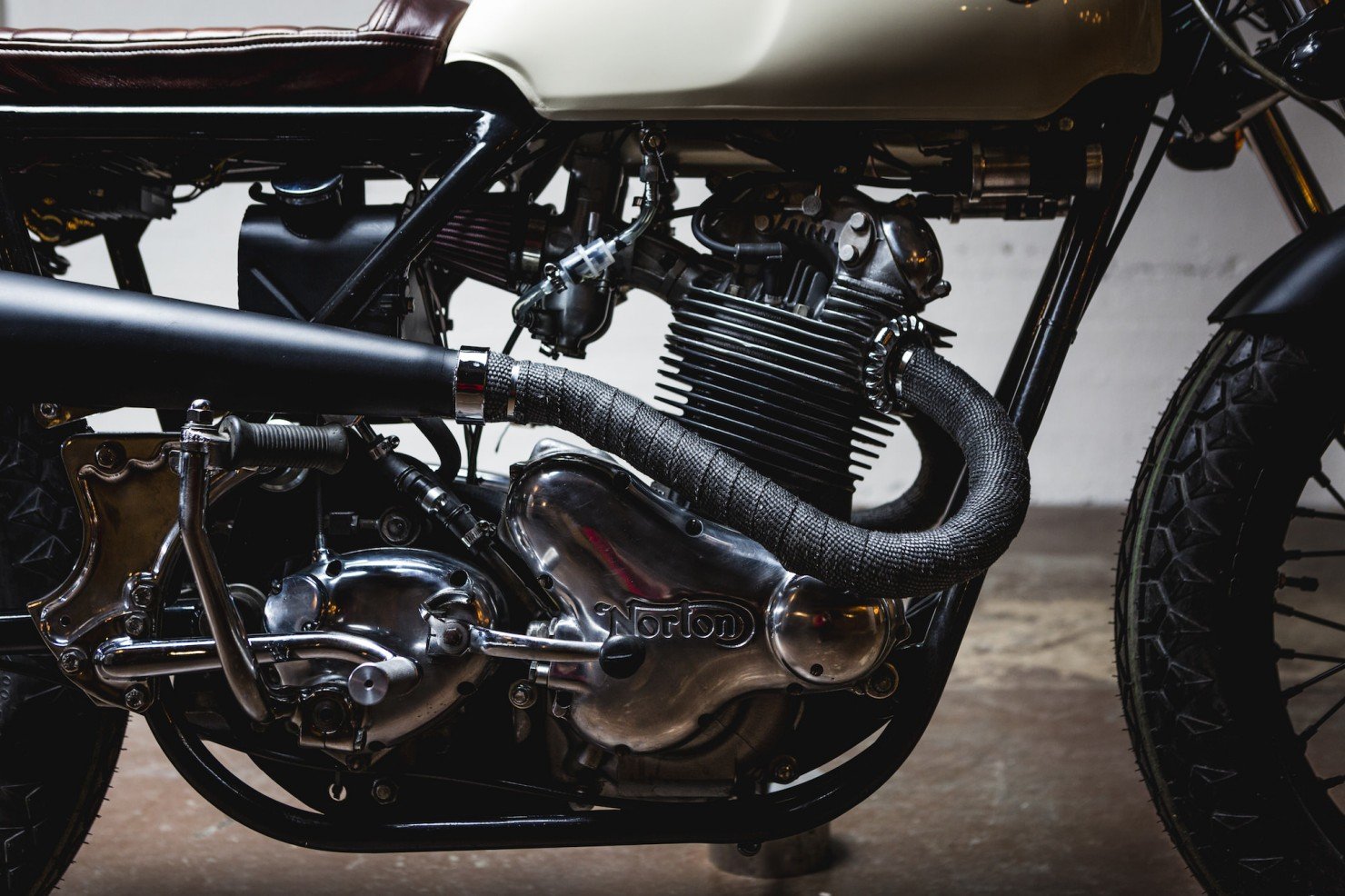 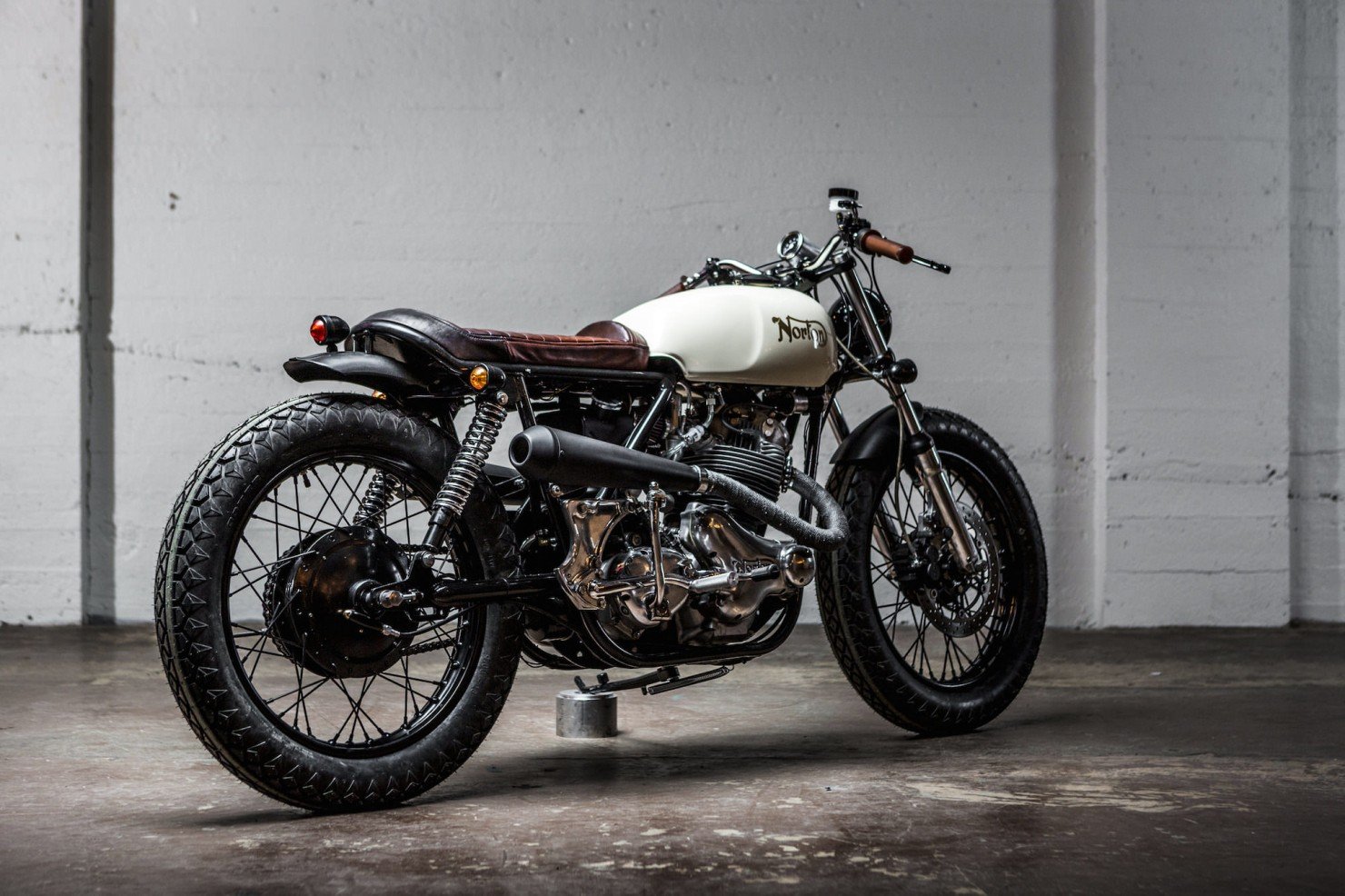 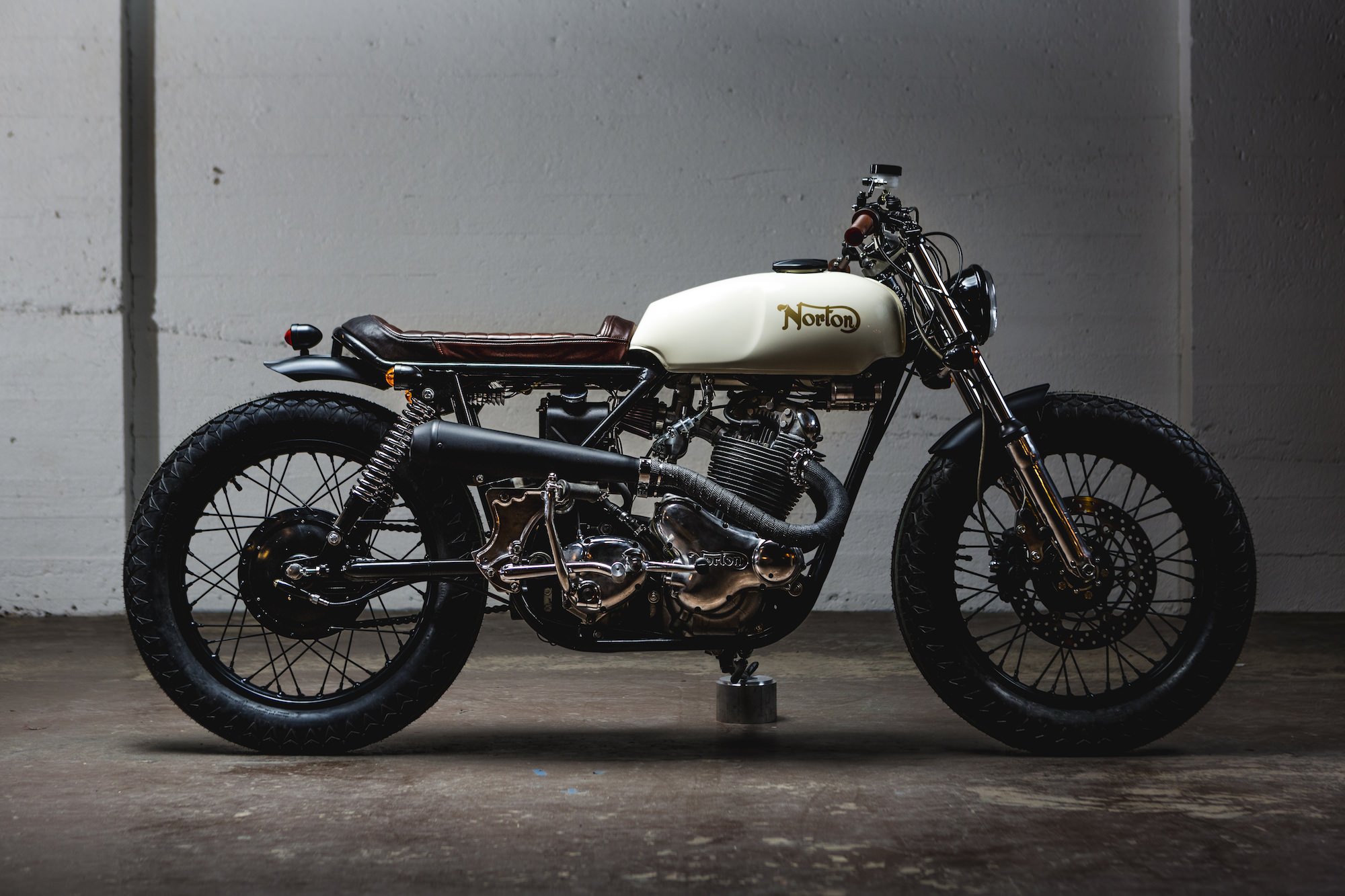