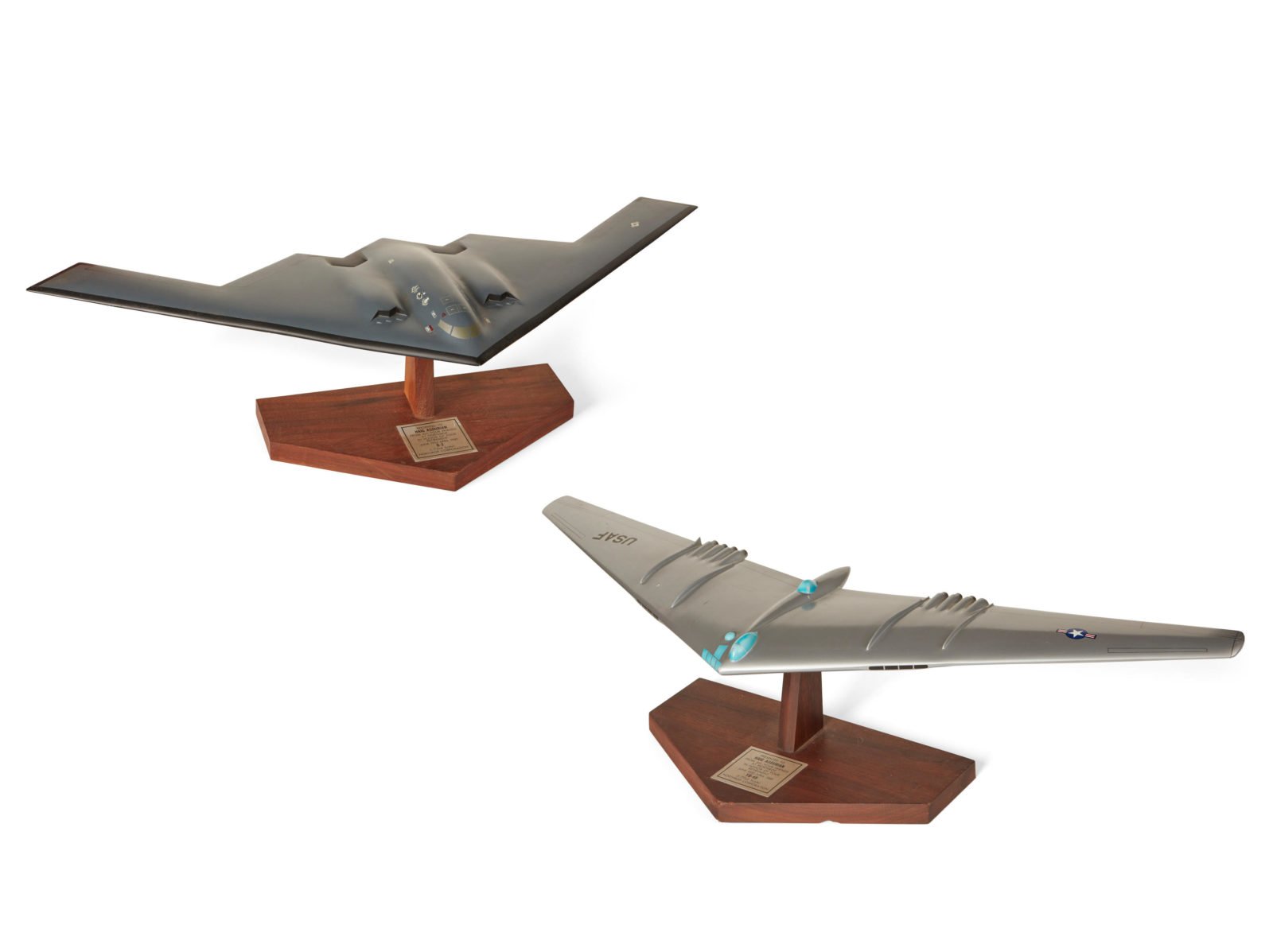 These two 1/72nd scale models belonged to Haig Asdurian, the former head of engineering at Northrop Corporation. One of the models is a Northrop YB-49 and the other is a B-2 Spirit – together they represent both the early years and the later evolutions of flying wing design.

The Northrop YB-49 was developed in the years shortly after WWII as the jet-powered successor to the earlier YB-35 propeller-powered flying wing.

Early interest in flying wing design as largely based around their aerodynamic efficiency however during testing in the 1940s it was noticed that they had a smaller radar cross section – a detail that would become critically important a few decades later. 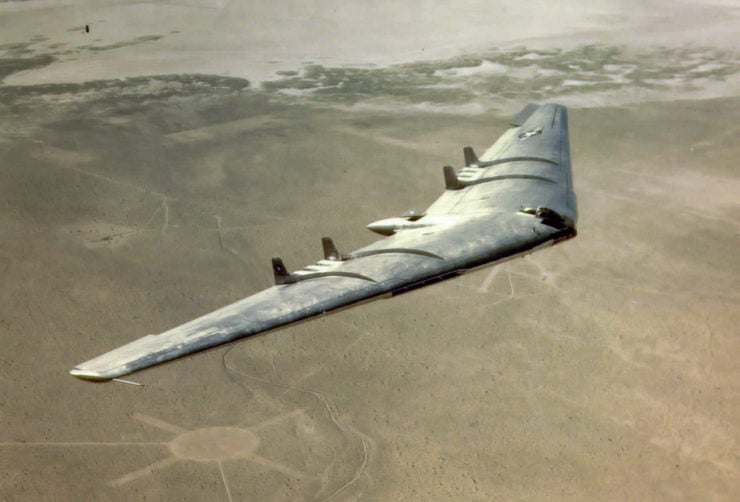 The Northrop YB-49 was never put into production, the more conventional Convair B-36 piston-driven design won out, however the development work done on the YB-49 would prove invaluable for the B-2 developed program that kicked off in the 1970s.

The B-2 Spirit, perhaps better known as the “Stealth Bomber,” was developed in the 1970s and into the 1980s. It was first flown in 1989 and would go on to become one of the most important strategic bombers in the USAF.

Thanks to its low observable stealth technology which was developed for passing undetected through dense anti-aircraft defenses, the B-2 Spirit is capable of carrying up to 16 B83 nuclear bombs or 80 Mk 82 JDAM GPS-guided bombs – making it a major part of the USAF’s aircraft fleet. 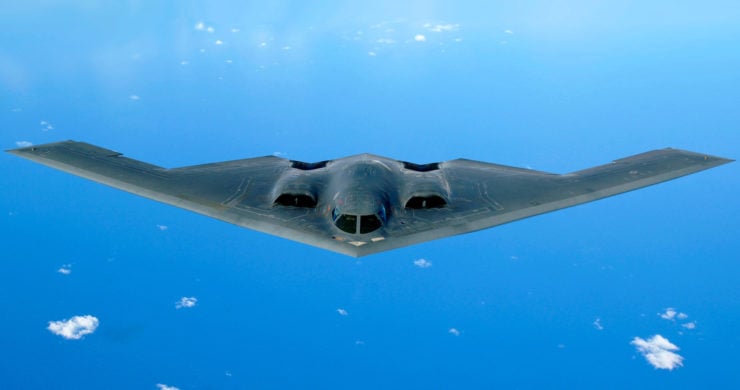 A B-2 Spirit soars after a refueling mission over the Pacific Ocean on Tuesday, May 30, 2006. Image: U.S. Air Force photo/Staff Sgt. Bennie J. Davis III.

As noted above the two models shown in this post belonged to the former head of engineering at Northrop, a man who was deeply involved in flying wing design and many other project that have likely not yet been made public.

The YB-49 model measures in with a 733 mm wingspan, it was built to 1/72nd scale and it’s sitting on a wooden presentation base with a presentation plaque.

The B-2 Spirit model has a wingspan of 727 mm, it’s also made to 1/72nd scale sitting on a wooden base with a plaque.

Both models are due to be offered by Bonhams at the History of Science and Technology Auction on the 25th of October with a price guide of $2,000 – $3,000 USD. If you’d like to read more about them or register to bid you can visit the listing here. 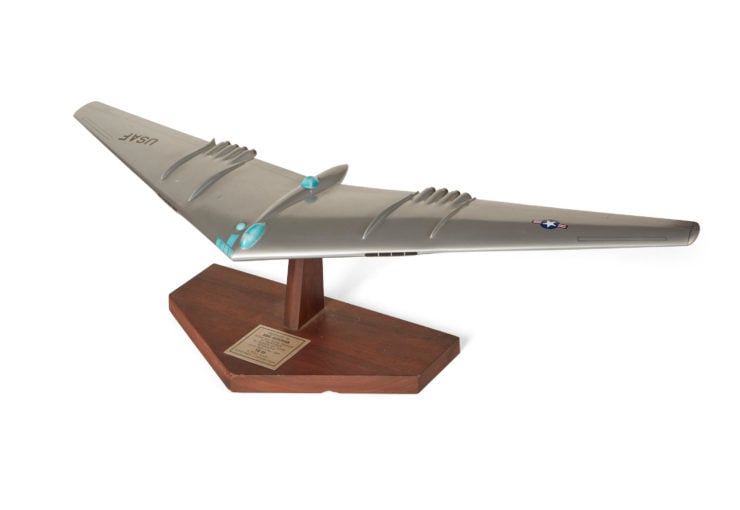 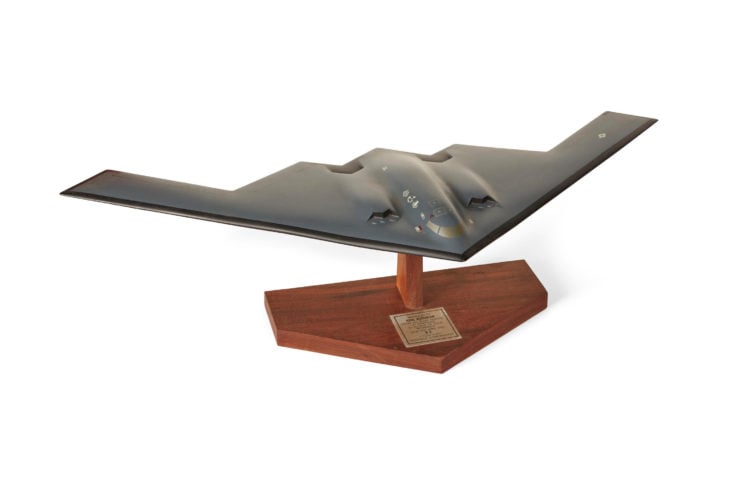