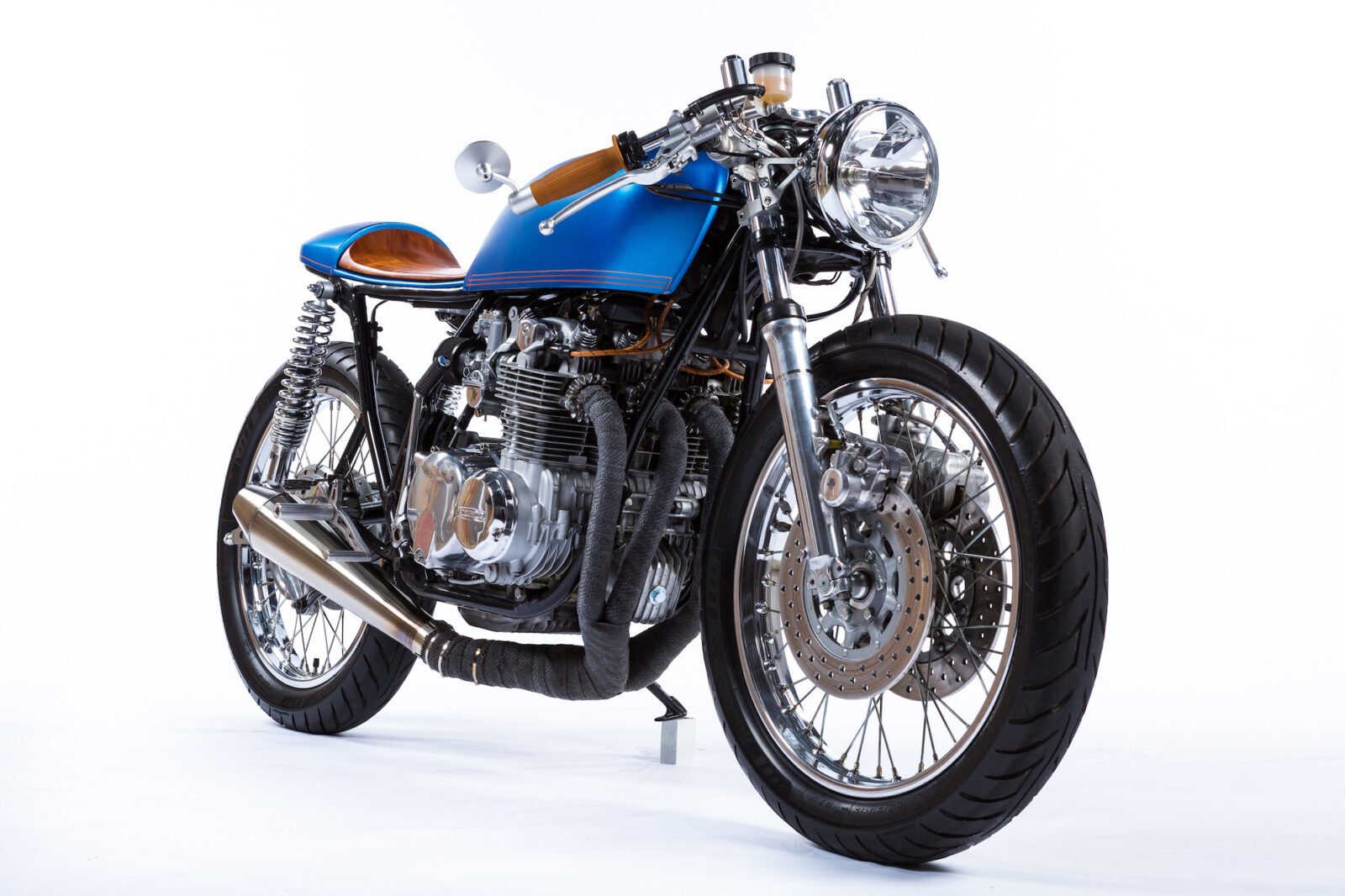 When possible we like to bring you the story of a custom motorcycle build directly in the words of the builder, to cut out the middle man and give you a unique, direct look into their process and methodology. This article was written by the team at MONNOM.

Based in Des Moines, Iowa MONNOM is the sole creative cafe motorcycle work of Mike Gustafson. My wife Sandy and I also own and operate Nestcraft Studio which creates high end contemporary custom furniture on a commission basis. I applied the same design aesthetic and attention to detail I use on my furniture commissions to create this project. I do some mechanical work specifically on early to mid 70’s Honda motorcycles for friends and fellow cafe enthusiasts but I am more interested in creating classic, well proportioned cafe racers with some modern performance upgrades. So many builds these days are utilizing large inverted forks and modern swing arms, they look amazing but I think that the classic cafe bike has gotten a little lost in the shuffle. I am currently working on another custom build, a 1973 Honda CB 350 twin, this project will expand on the use of wood throughout the bike but will in the end be a simple, refined and classic looking cafe bike.

This build began with a very sad 1978 Honda CB 550, the tank was in very rough condition, the electrical system was a mess and the engine had very little compression. The build began by stripping the bike down, cleaning things up and establishing some sort of starting point. The tank had been poorly altered by a previous owner, which included removing the recessed locking fuel cap cover and filling the remaining holes with scraps of tin can and Bondo. My fabrication work began by removing the top portion of the CB 550 tank and replacing it with a top section of a CM 450 tank. I welded on the raised upper section and body worked the fillets giving the stock tank a much more aggressive look.

I then turned my attention to the electrical system, Sparck Moto supplied a custom loom to my specifications that included an upgraded regulator / rectifier unit. I installed a new set of left hand controls with a simple on/off switch relay. The large 7” headlight was the perfect size to custom flush mount a Motogadget Motoscope Tiny gauge. I installed an LED rear light strip with a dual intensity circuit by Custom Dynamics along with small LED turning indicators. A tiny 4 cell lithium ion battery is tucked under the seat cowl and it supplies enough cranking amps to easily start the bike. An electronic ignition from Dyna and a new set of 5 OHM Dyna coils finished off the electrical side of things.

I rebuild the top end of the engine with new rings, a cylinder hone, gaskets, cam chain slipper, seals and a valve job. The engine cases were hand polished and the motor was painted. A freshly powdercoated, plated and polished set of CB 500 carburetors replaced the stock carbs that were literally falling apart. I wrapped a new set of MAC 4 into 1 headers and added an 18” reverse cone stainless steel slip on from Cone Engineering. CNC aluminum rearsets were installed with hand fabricated linkage and the clutch basket was also rebuilt. I added a second front rotor, caliper and upgraded the master cylinder to a new Nissin 14mm piston which added a much needed increase in front braking power. I drilled both rotors to visually lighten up the front end and reduce the weight a bit. The front forks were rebuilt with new seals and Progressive fork springs and the rear shocks were upgraded to 360MM units and the fuel tank position was also modified to give the bike a much more aggressive stance. I dropped one tooth off the front sprocket to liven the low end of the bike and a new chain and rear sprocket smoothed the rest of the power.

The rear subframe was chopped off and a seat hoop was welded in. I shaped the rear seat cowl from foam and clay and laid out several layers of biaxial fiberglass and epoxy resin. The seat pan was then ready to receive a hand shaped solid Cherry wood seat I made. The wood was rough cut on a bandsaw and the final shaping was done with hand tools. The tank was body worked and then painted with a custom combination of House of Kolor Shimrin base color and a matte 2K clear. The bronze pinstripes were laid out by hand and finished out the details. 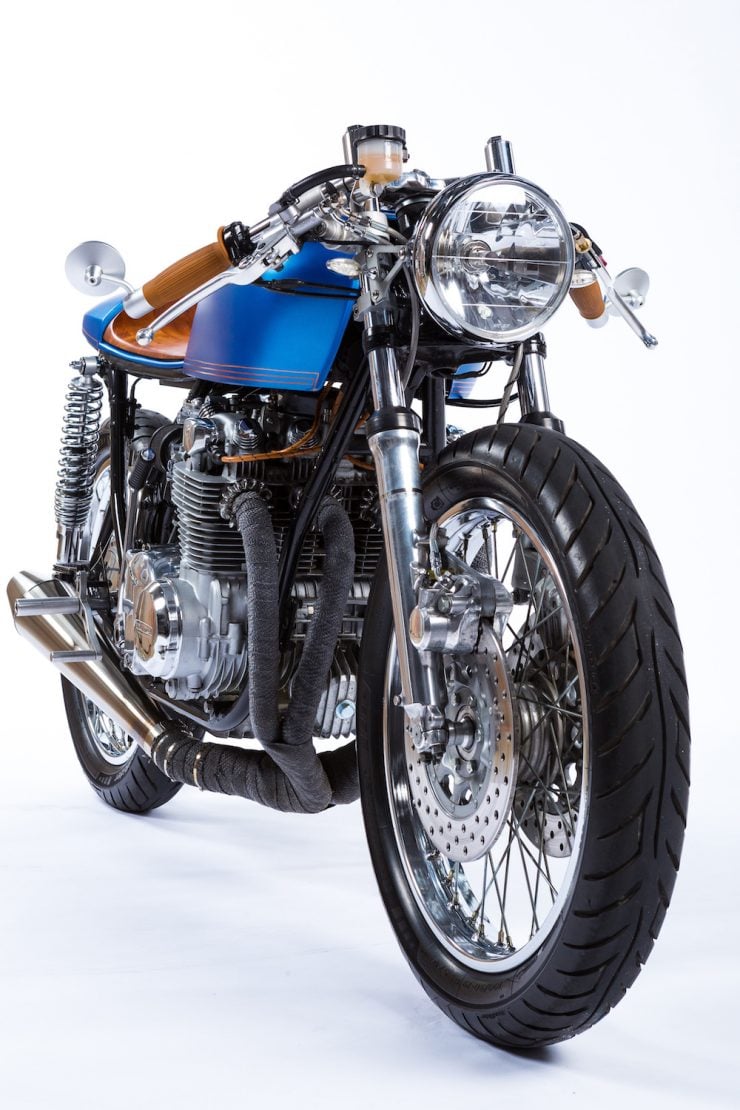 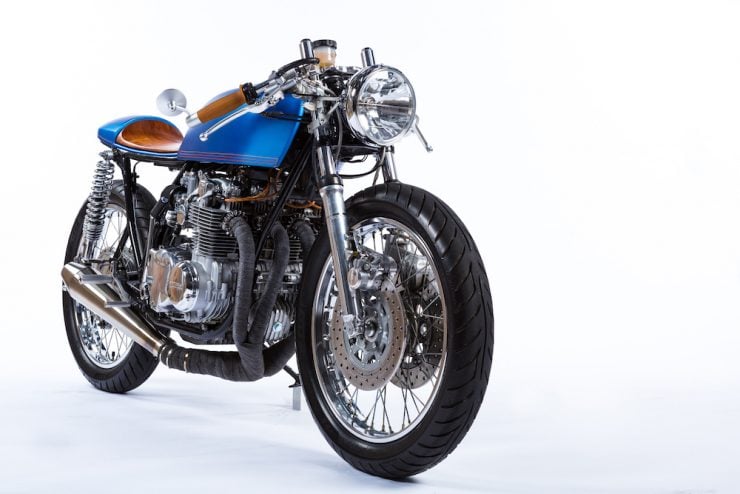 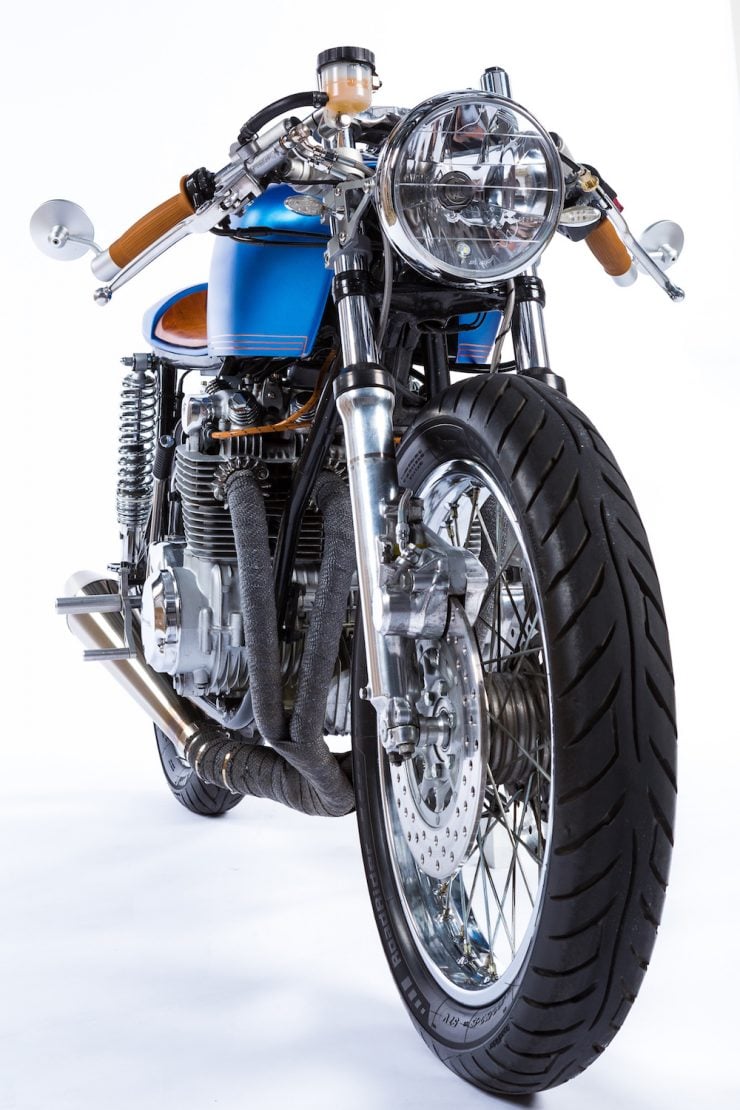 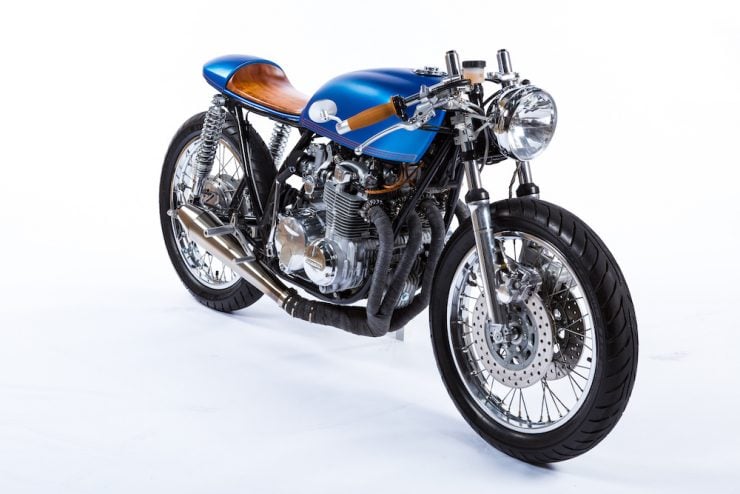 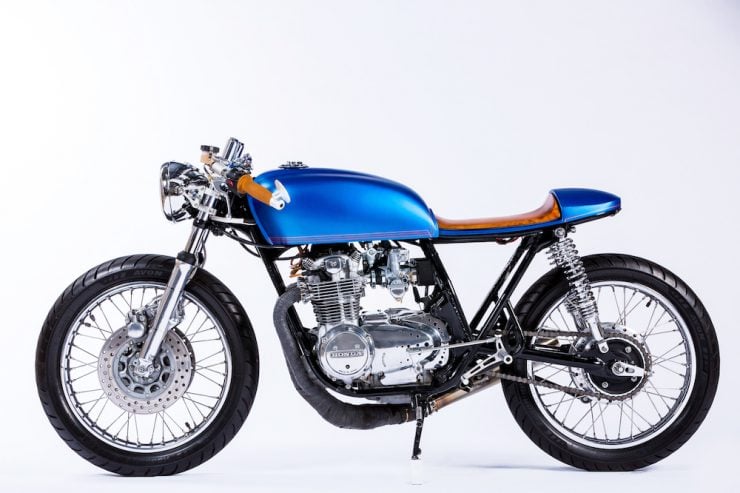 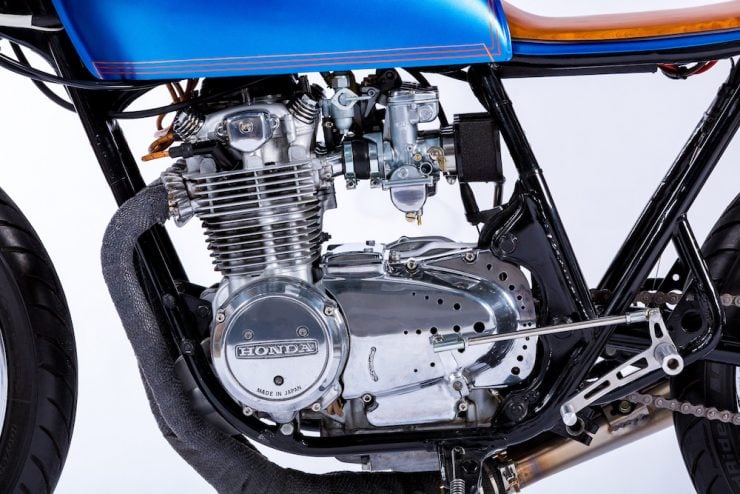 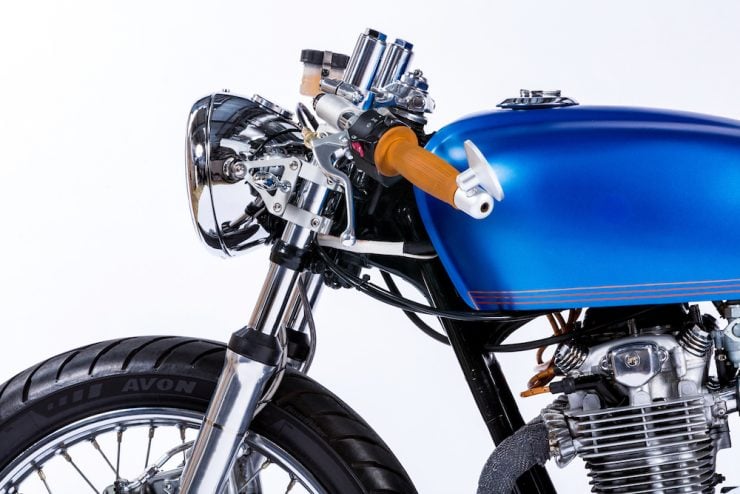 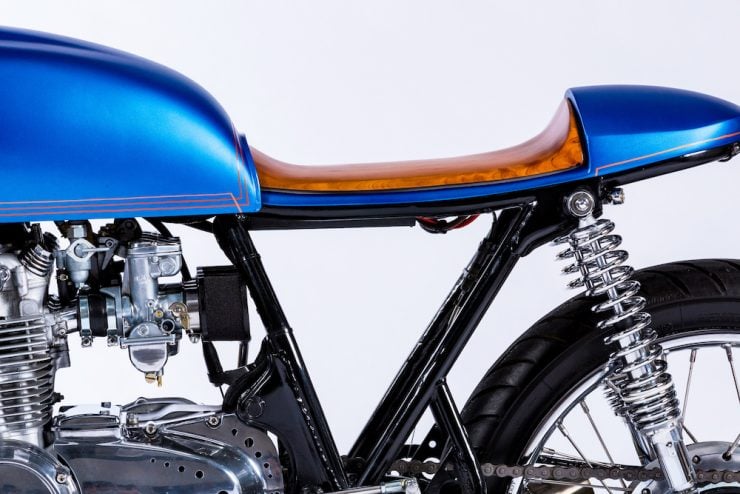 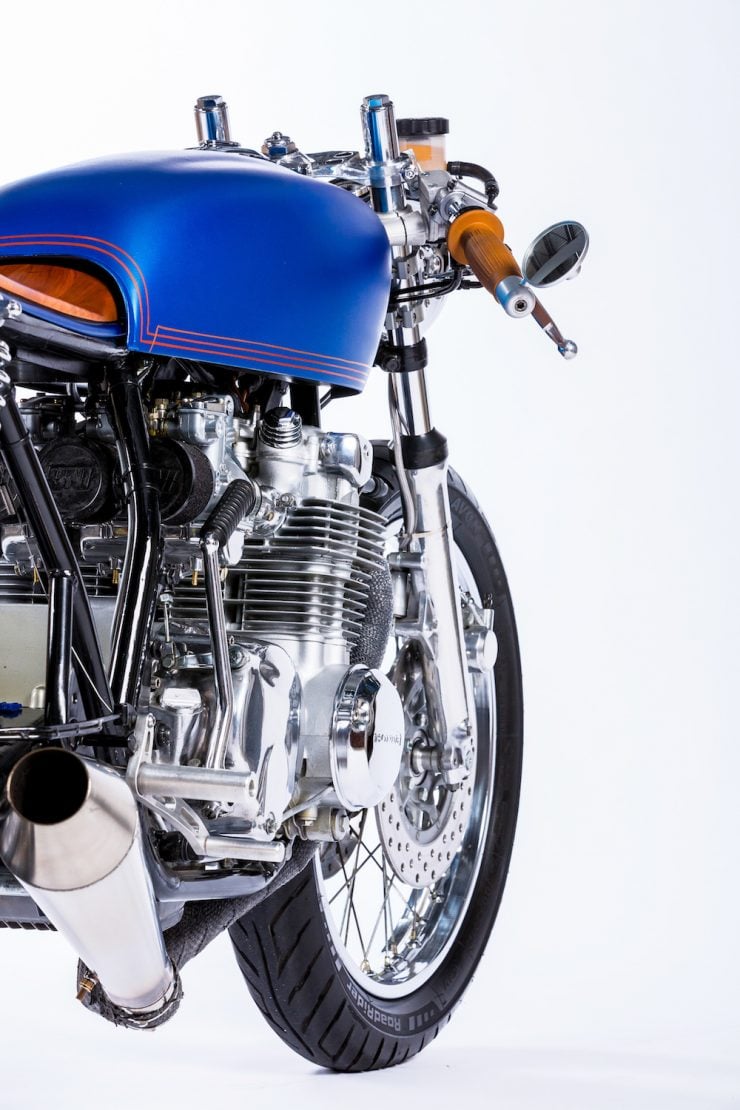 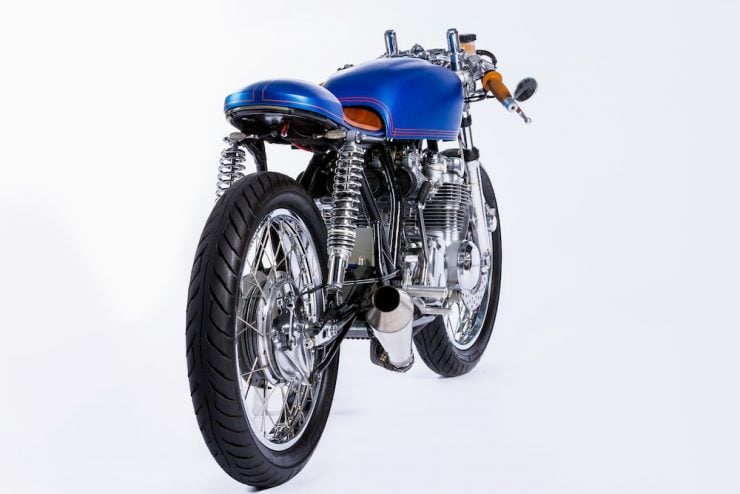 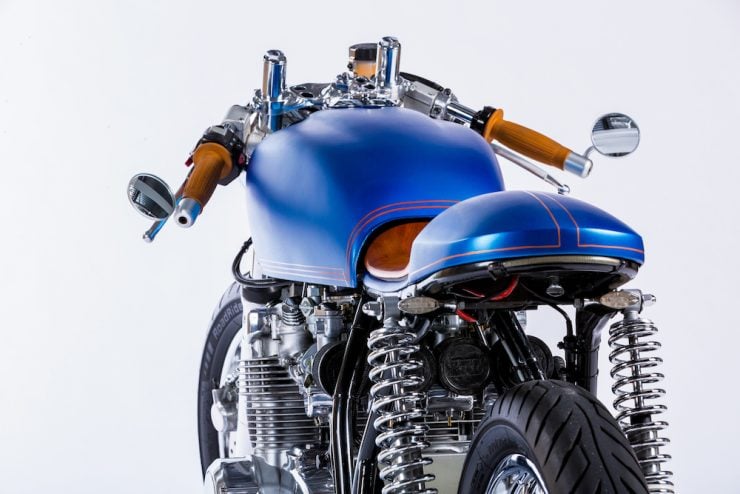 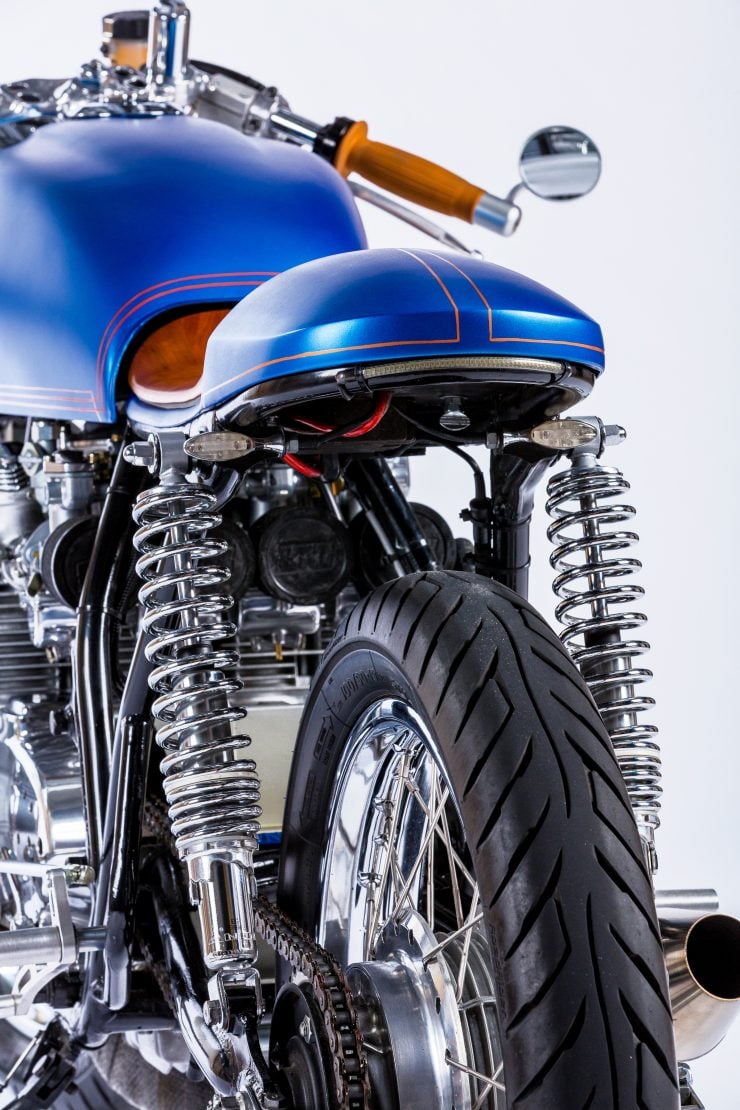 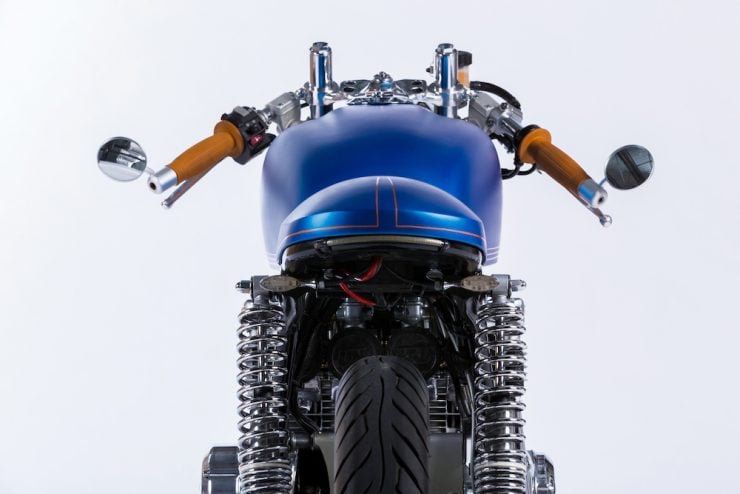 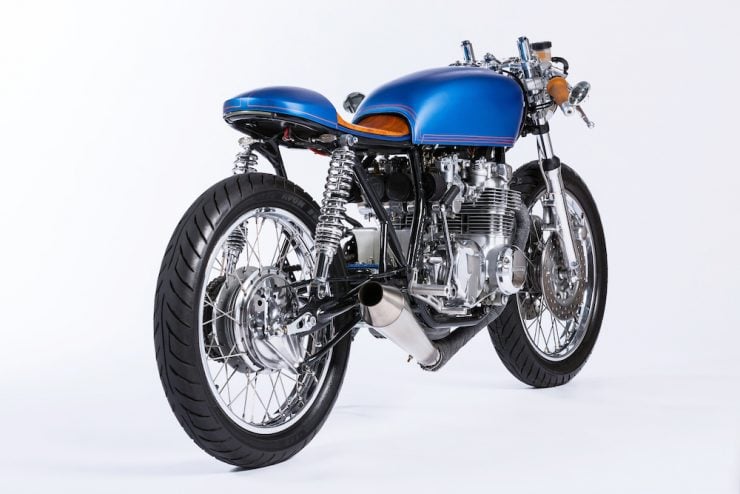 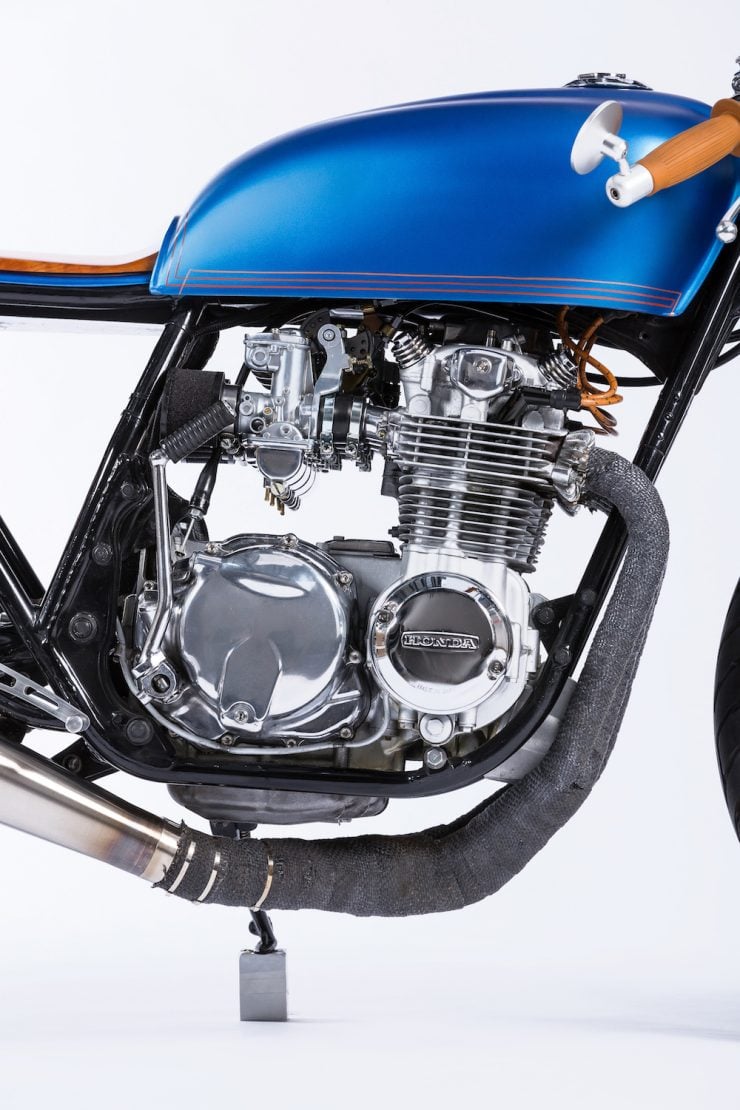 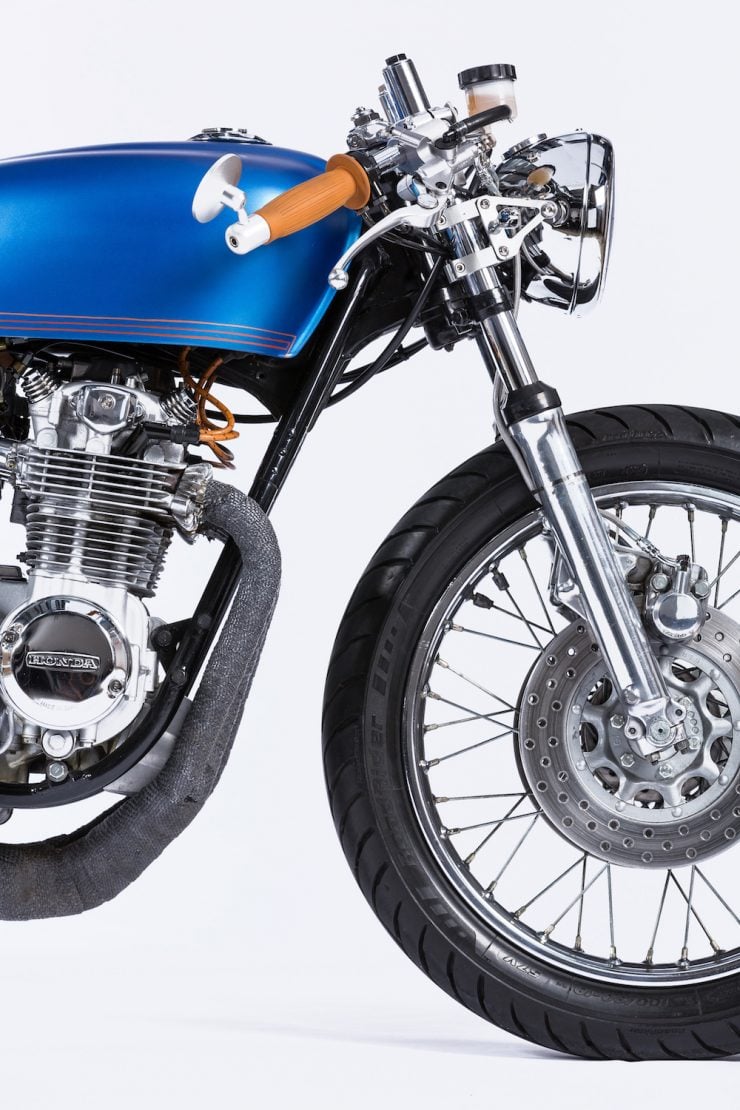 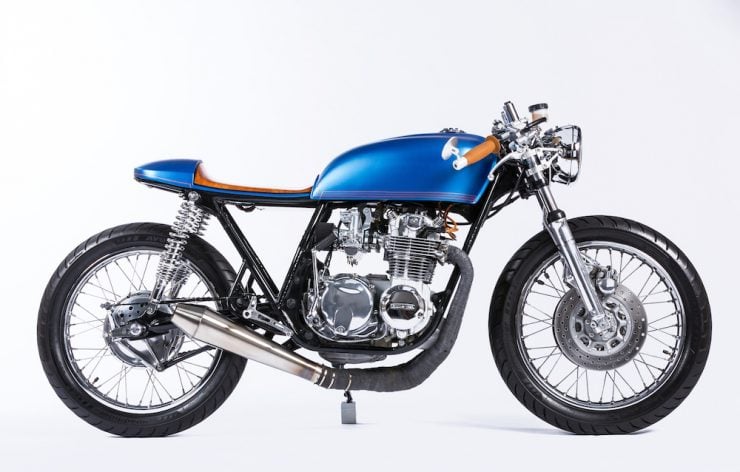 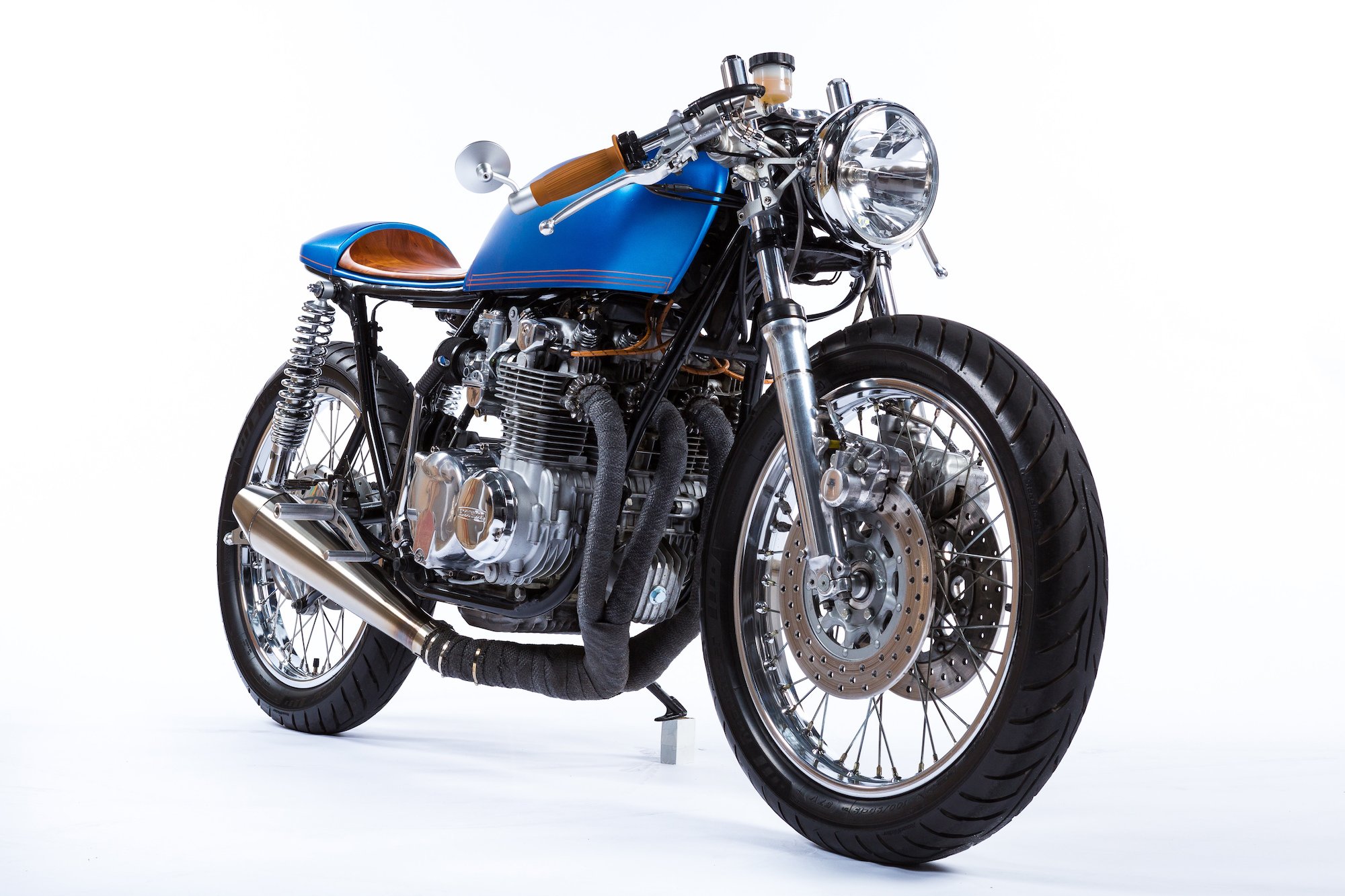