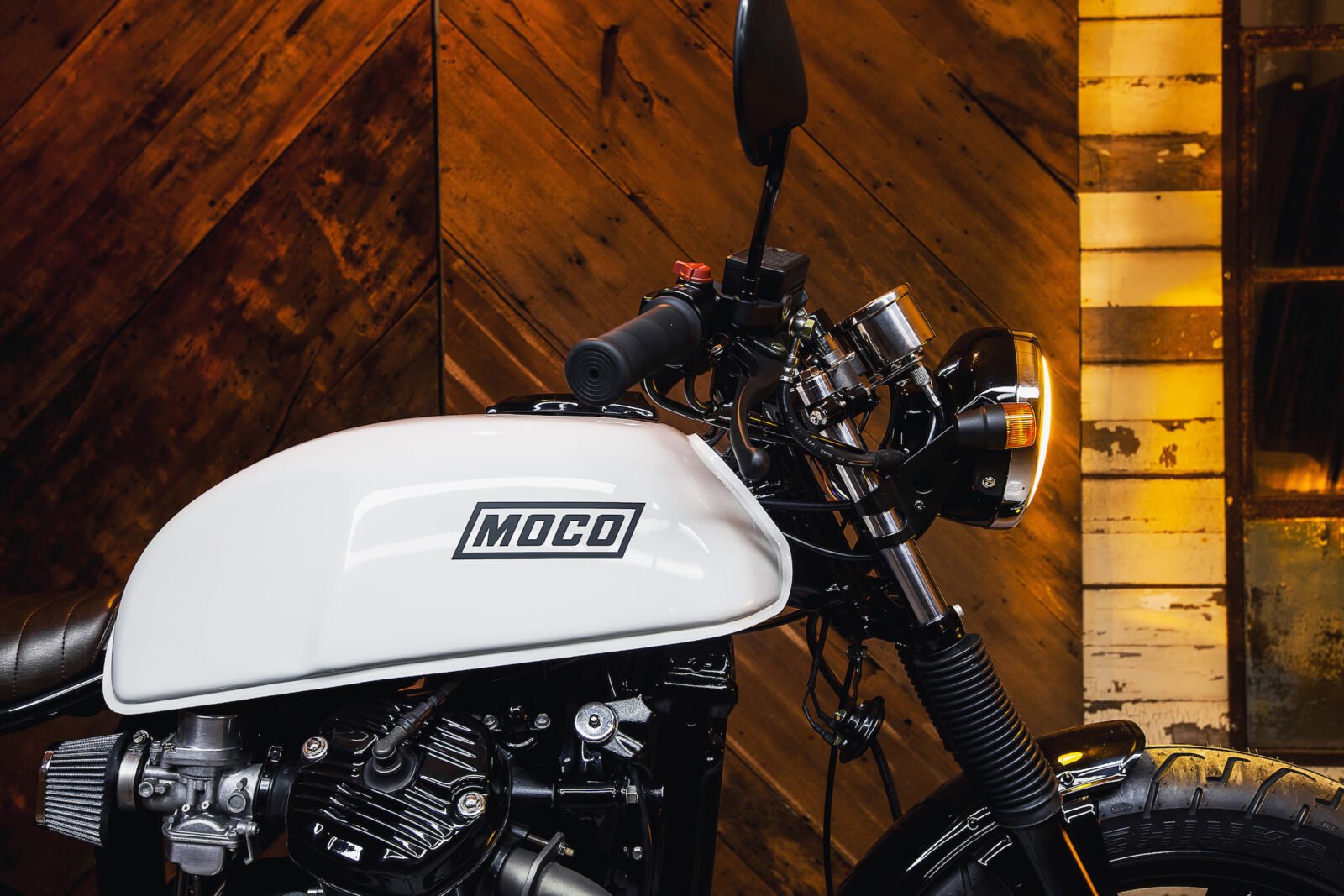 The CX500 was a significant departure from the norm for Honda. The Japanese marque had made a name for themselves by introducing the Honda CB750 and creating what would become the Universal Japanese Motorcycle (or UJM). This basic layout was copied by the other three major Japanese motorcycle manufacturers, becoming the de facto standard for many years.

Honda assigned Shoichiro Irimajiri and his team to the new CX500 project, this was the man who had developed the original Goldwing GL1000 engine, and who would go on to develop the most outlandish four-stroke Honda engine of the era – the inline-6 cylinder CBX.

The Design of the Honda CX500

Shoichiro started the CX500 with a blank slate, the goal was to design a mid-size motorcycle that would be suitable for new riders, but still have appeal to more experienced motorcyclists. The V-twin was chosen as it was thought to be already familiar to most American riders, though Shoichiro’s design had a lot more in common with the V-twins used by Moto Guzzi.

The biggest problem with longitudinally mounting an engine like a V-twin is that the crankshaft generates significant gyroscopic forces that can lean the whole bike over when the throttle is used aggressively. Honda sought to counter this effect by mounting the transmission under the engine, and having it spin in the opposite direction to the crank. It was a clever solution that largely negated the effect, but it did make the engine unusually tall. 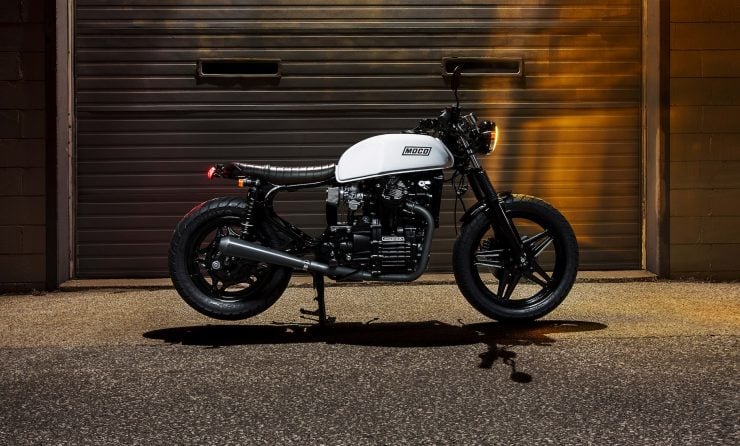 The V-angle of the CX500 engine is 80°, and the heads are turned 22° to move the carburetors in-board, so they didn’t interfere with the rider’s knees. Although Honda had made a name for themselves with overhead camshaft motorcycles, they couldn’t make an OHC design work with the CX. The engine was already too high.

The engineers instead used a pair of trusty pushrods (per head) to actuate the forked rocker arms, that each operated two valves each, giving it a total of four valves per cylinder.

The engine was designed as a load-bearing unit, with a steel backbone frame, and the resulting bike had a relatively tight wheelbase due to the shortness of the engine. Up front a pair of standard hydraulic forks were fitted, paired with dual coil-over shocks at the rear.

Unfortunately for Honda, sales of their new model were slow. It was probably due to the unusual looks, though in the years that have passed since the model has developed a cult following around the world. From an engineering perspective they’re excellent bikes, and custom builders have realized that they make an excellent platform for a wide variety of motorcycle styles. 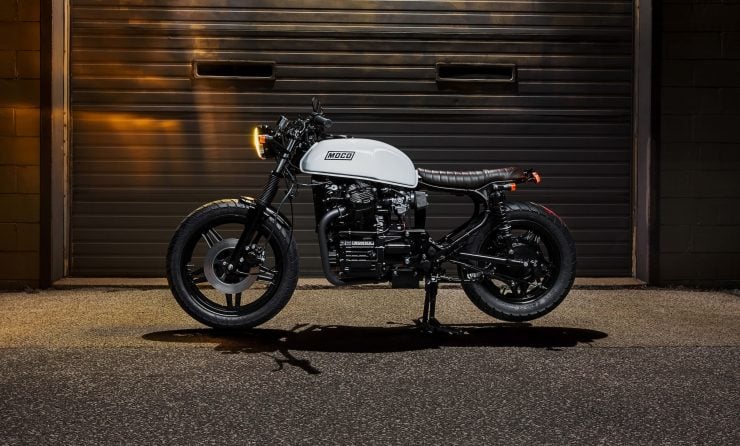 This build by Chris Benotto and Mike Johnston was created to take the best elements of the CX500 and eliminate any negatives – leaving a bike that even diehard critics of the model can’t help but like.

Chris is the founder of Mightnight Oil Cycle Co., an up and coming motorcycle-based clothing brand with a lifelong love of motorcycle culture. This is his first build – but Mike Johnston, long-time friend and vehicle dynamics engineer at Ford Performance, provided a helping hand.

The build started with a one-owner 1979 Honda CX500 Deluxe that Chris had purchased from the original owner. Once the bike was stripped, the frame was de-tabbed, the front fender was chopped down, a custom rear frame loop was welded in, and the battery box was relocated to a new home under the rear of the engine.

Chris had a very specific idea in mind for what he wanted the bike to look and ride like, and he experimented with a series of finishes and textures before settling on the specific color codes used on the finished bike. The frame, heads, and wheels were finished in gloss black powder coating, high-temperature satin black was used on the engine, and the tank was finished in a contrasting white.

The exhaust was coated with Tungsten Cerakote (used in firearms), and Chris’ brother who’s a woodworker make me a walnut ring to inlay around the ignition. The original electrics were showing their age, so the two men wired in an all-new simplified wiring harness, with new handlebars, and hand controls.

Attention now turned to the engine internals, the top end was refreshed, and the carburetors were re-jetted to suit their new pod filters and custom high-flow 2-into-1 exhaust. The completed bike is notably lighter that its stock starting point, and the engine revs more freely and produces more power thanks to the improvements in breathing and jetting. 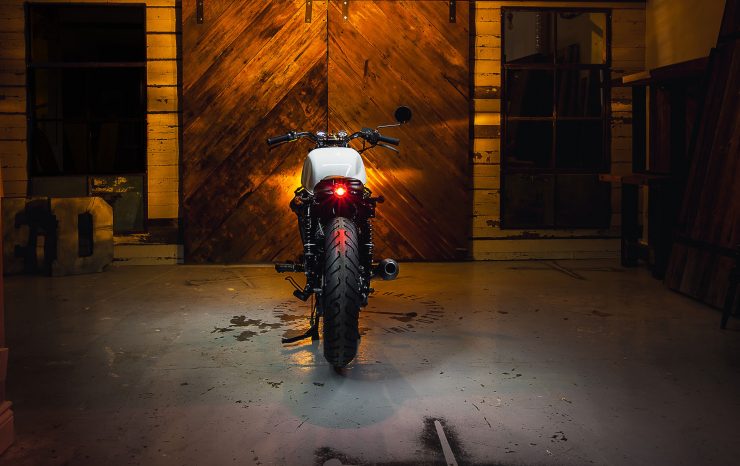 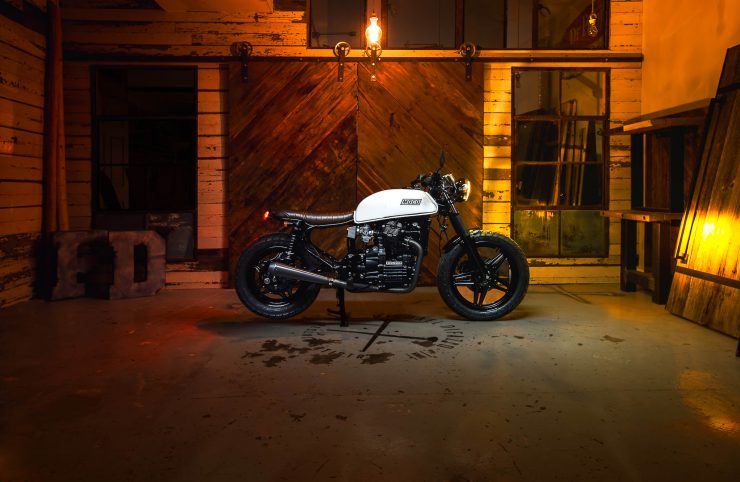 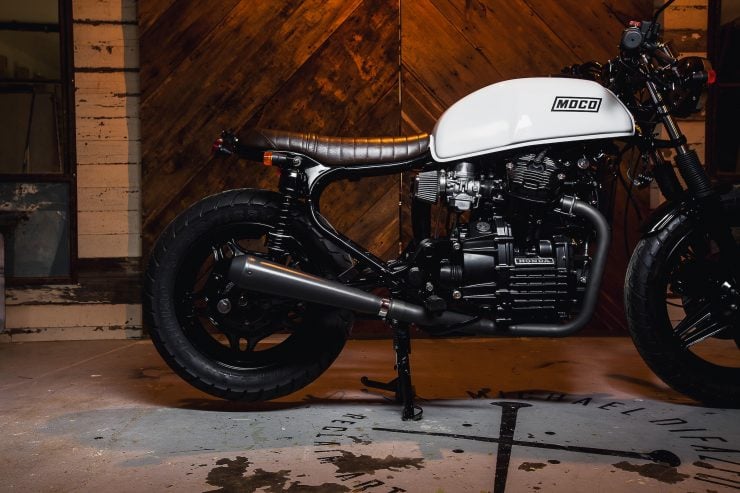 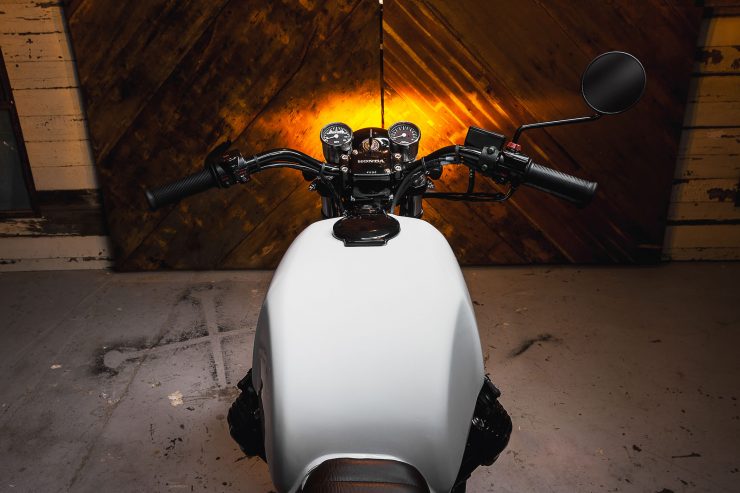 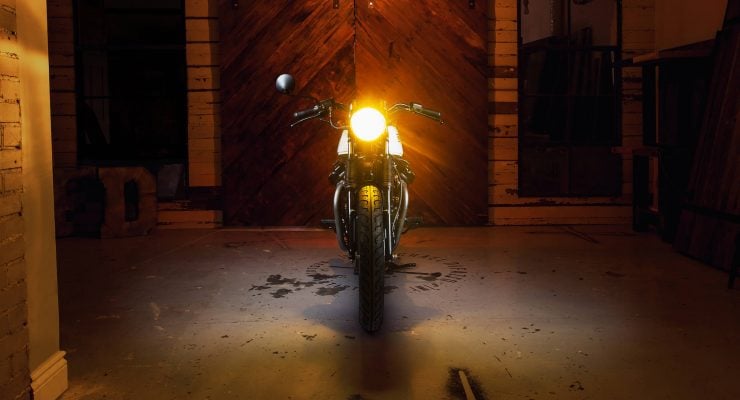 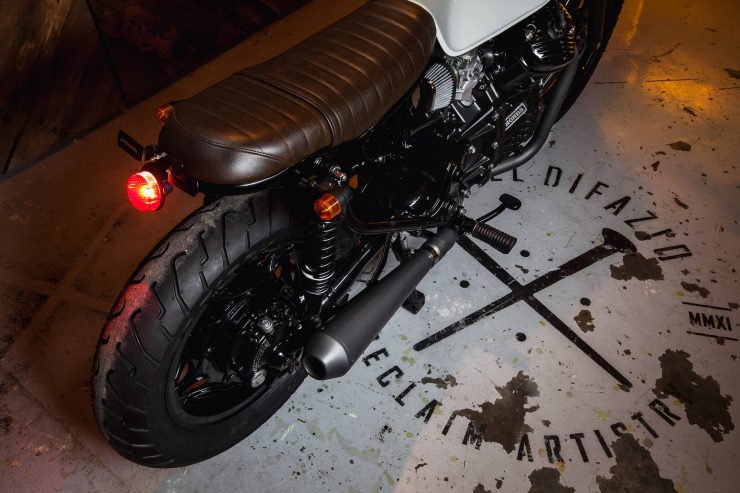 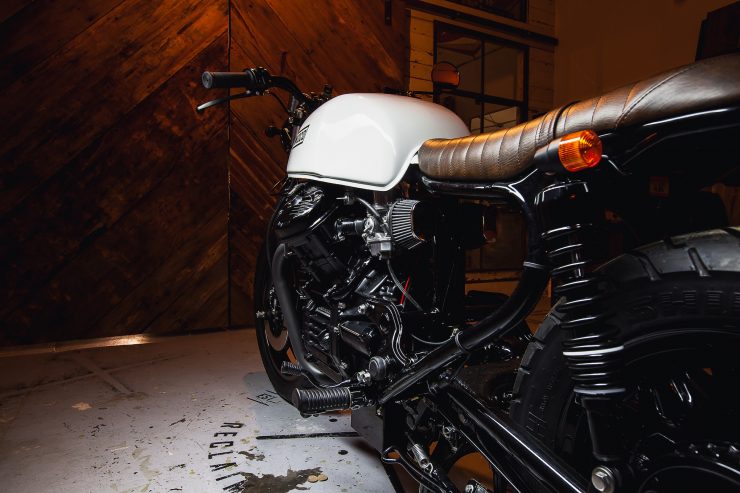 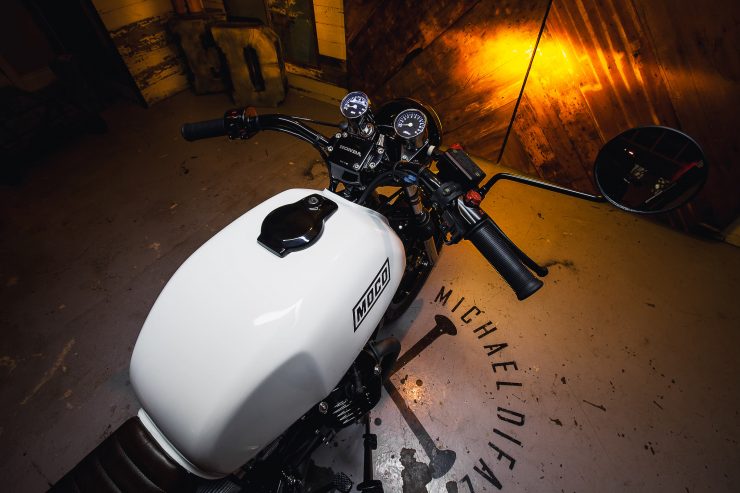 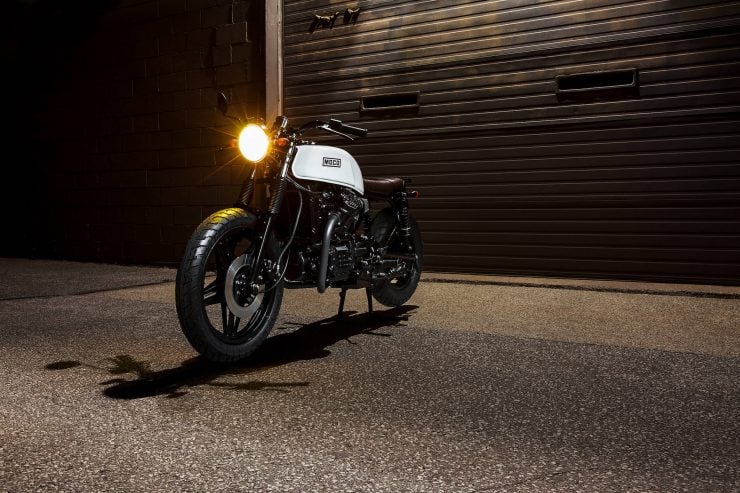 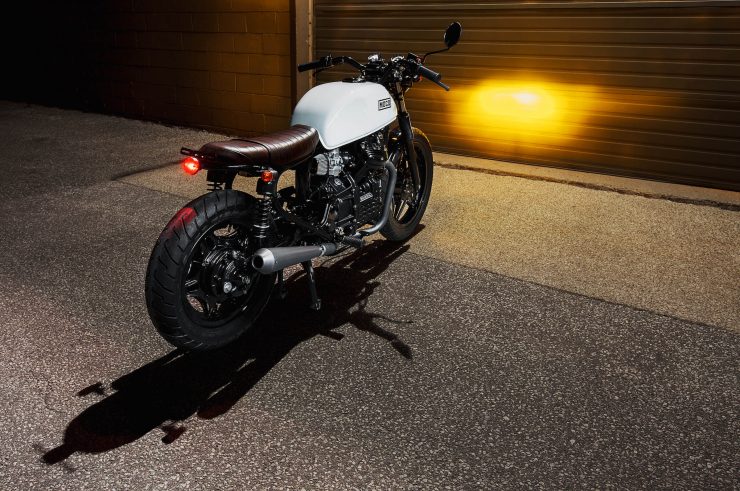 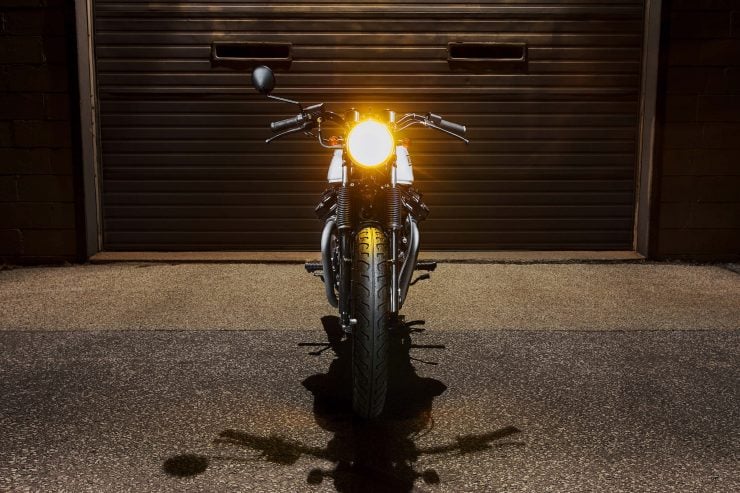 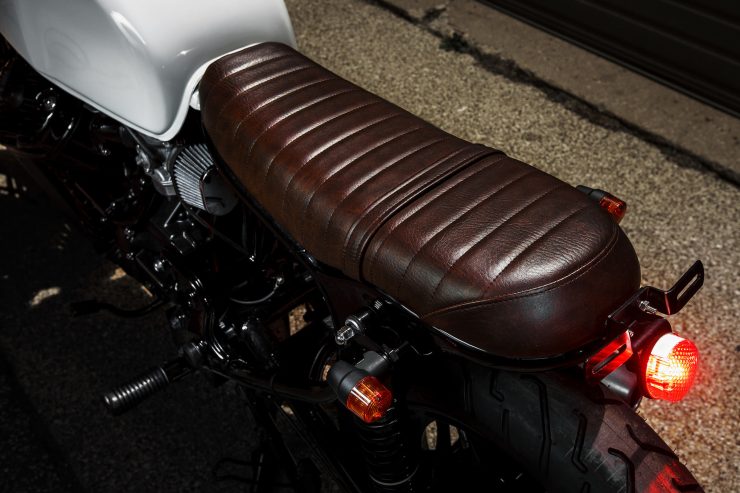 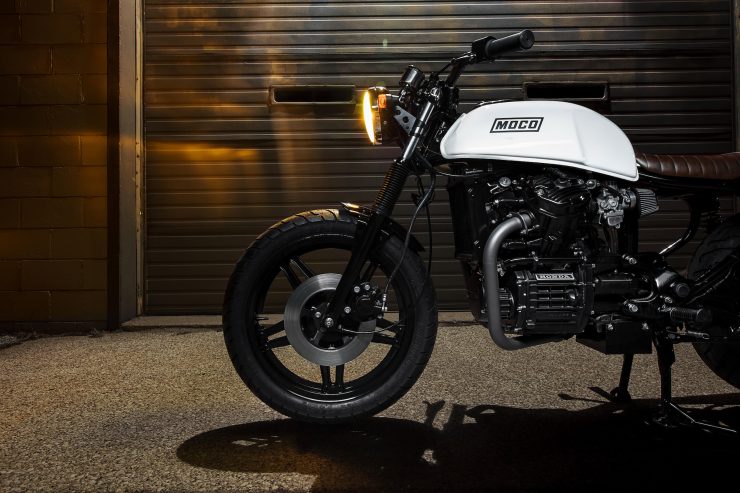 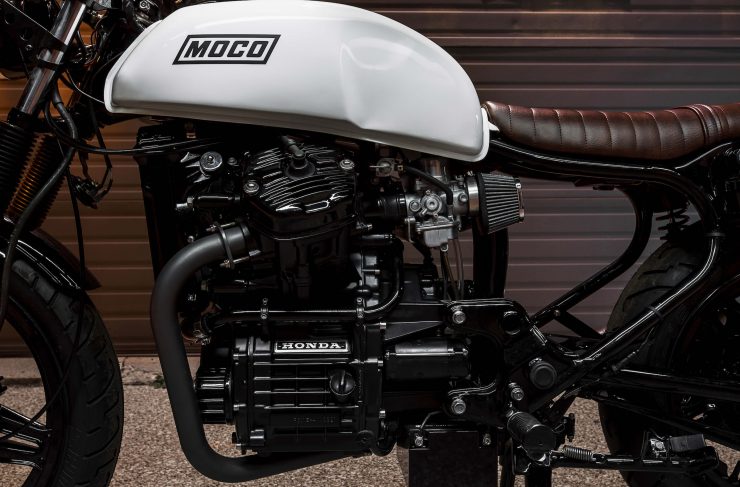 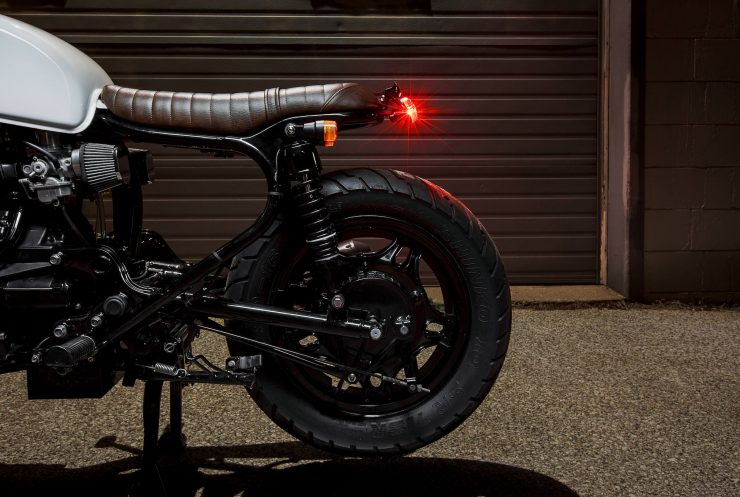