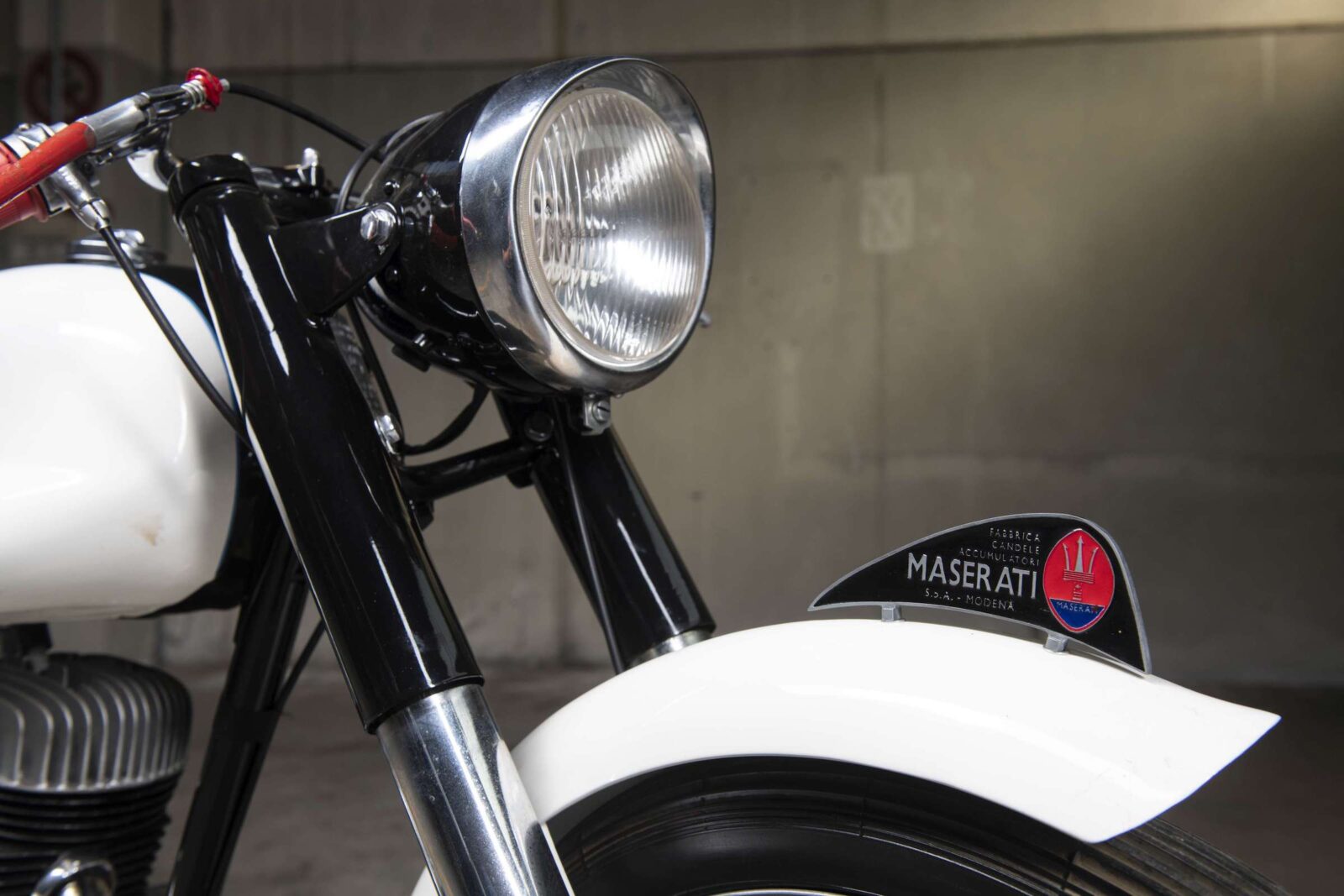 Whenever I see a Maserati motorcycle at a show I have to go over for a closer look and chat to the owner, they’re a rare sight nowadays, and there are many who have no idea that motorcycles were ever built by the Italian company far more famous for their performance cars.

The truth of the matter is that technically speaking, the Maserati car company and the Maserati motorcycle company were never really the same thing.

This can be confusing as both the cars and motorcycles wear identical badges proudly displaying the famous red trident, but the only reason a Maserati badge ever ended up on a motorcycle was down to an incompetent notary.

In the early 1950s the company was separated into three unique entities – Maserati Automobili who built the cars, Fonderie di Modena which was the foundry, and Fabbrica Candele e Accumulatori Maserati which made lightbulbs and spark plugs.

A mistake was made when cleaving off the latter subsidiary, and they were left with the legal right to use the official Maserati logo, which they did with some considerable success throughout the 1950s.

Maserati motorcycles were considered among the best in Italy, and were seen as a status symbol by many as a result of the halo effect that came from the great racing successes being had by Maserati Automobili. 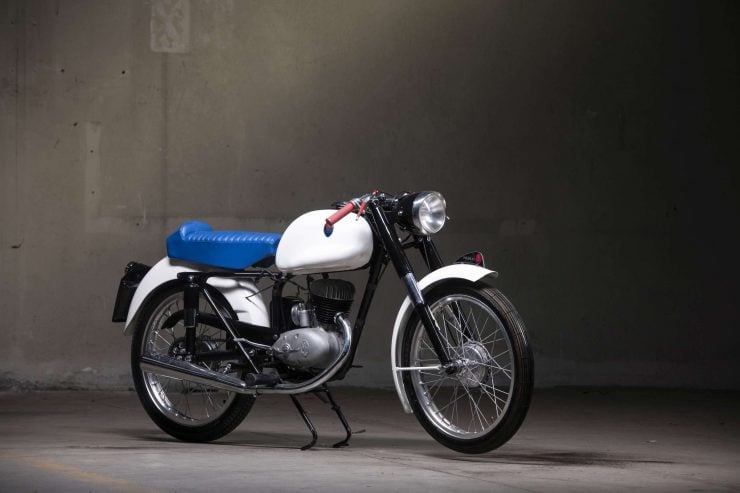 In the 1950s there was an urgent need for inexpensive motorized transportation in Italy, and demand for smaller-engined motorcycles and mopeds was strong. Management at Fabbrica Candele e Accumulatori Maserati saw this and realized that they were uniquely positioned to enter the market, so they purchased Italmoto in 1953 – a small motorcycle manufacturer based in Bologna.

Production was moved from Bologna to Modena, and the motorcycles were rebadged as Maseratis, however this was far more than a simple exercise in badge-engineering. Investment was made in the development of new motorcycles, and engine designs were licensed from German marque DKW to cut down on development time.

The company remained in production throughout the 1950s but financial difficulties coupled with the rise of affordable microcars resulted in foreclosure in 1960.

Today the surviving Maserati motorcycles are much sought after by collectors, and there are small clubs in Europe and the USA dedicated to keeping them running and providing access to advice and spare parts. 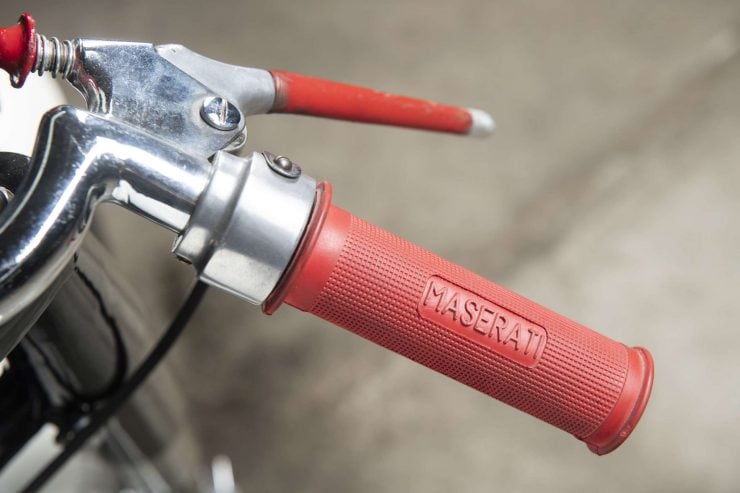 The 125 Tipo T2 shown here is a 1955 model powered by a distinctive DKW-derived engine that was licensed and made in Italy.

This engine was a reliable motor by the standards of its day, it’s a two-stroke that features a capacity of 123cc, it has a single-cylinder, a single carburetor, a bore of 52mm and a stroke of 58mm with a compression ratio of 6.5:1 and a power output of 6.8 bhp at 5,000 rpm.

Though not quick by the standards of today the Tip T2 was capable of 95+ km/h, and perhaps most importantly it was very fuel efficient, with fistfuls of inherited German reliability.

The fetching white and blue 125 Tipo T2 here was restored to a high standard in 2012 and now presents in what is probably better-than-new condition. If you’d like to read more about it or register to bid you can click here to visit the listing on Artcurial. 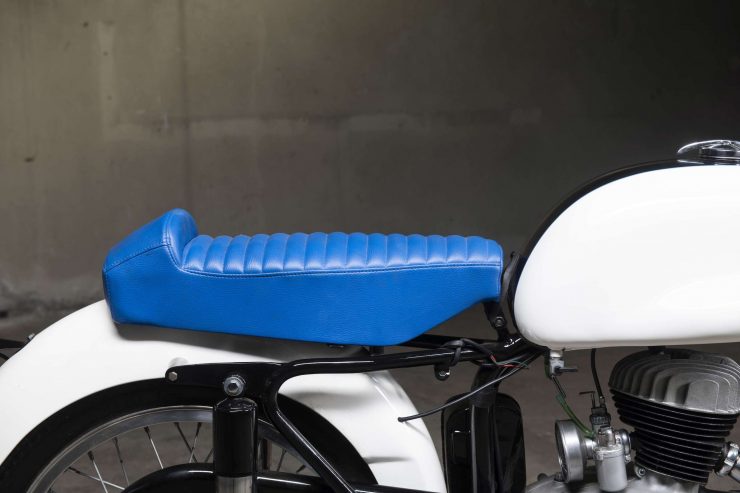 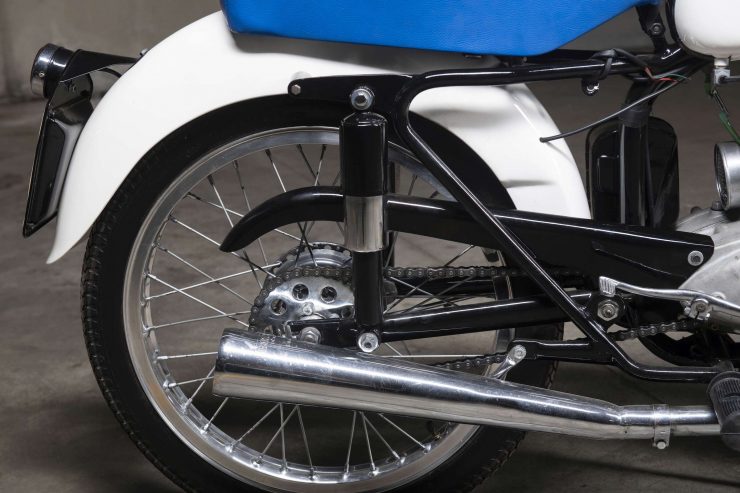 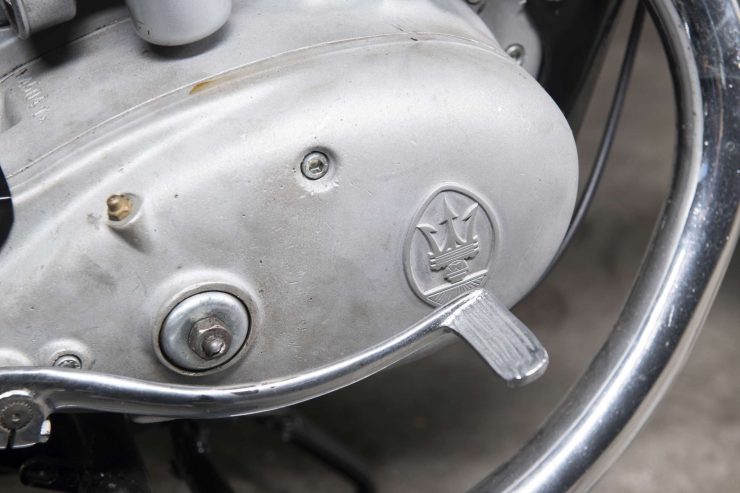 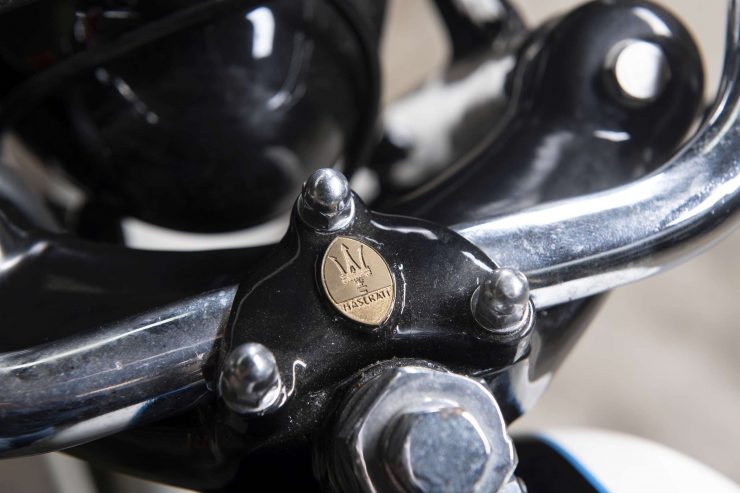 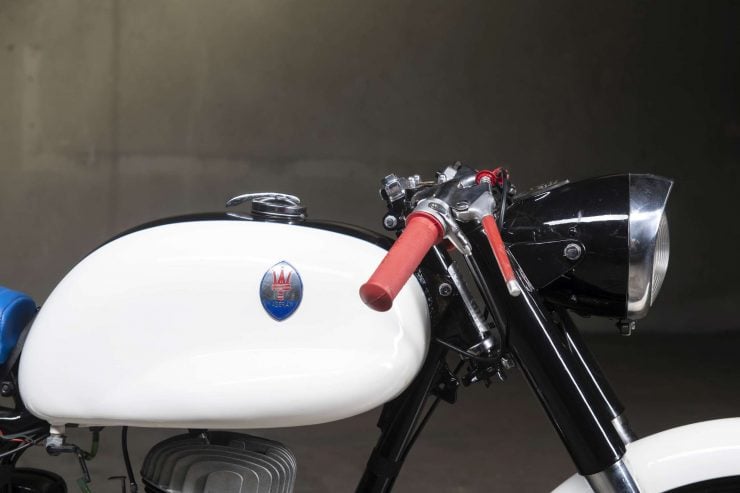 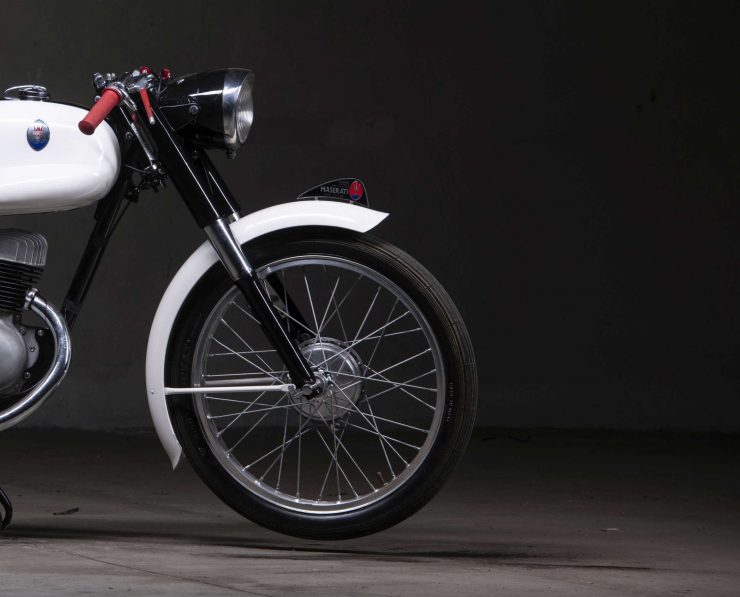 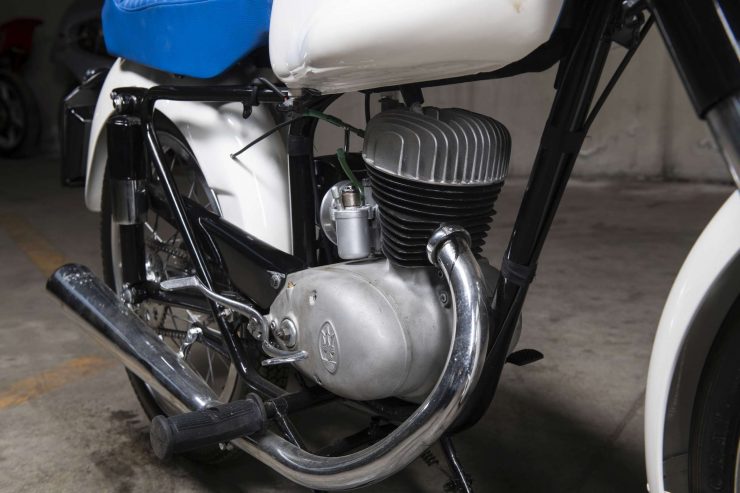 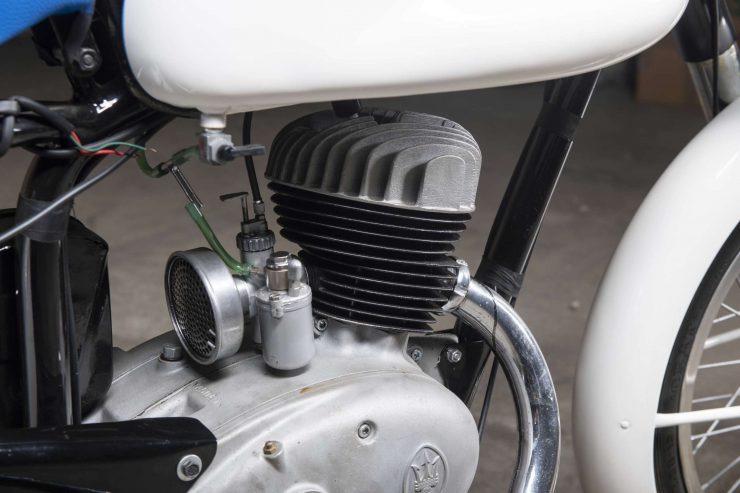 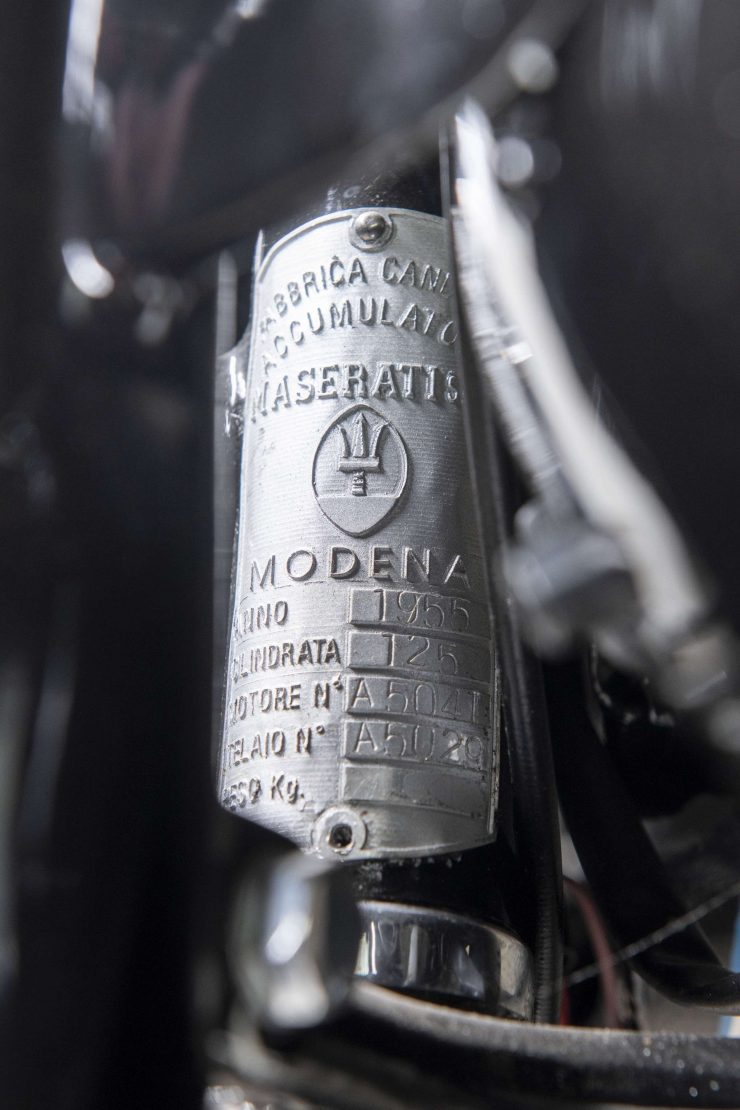 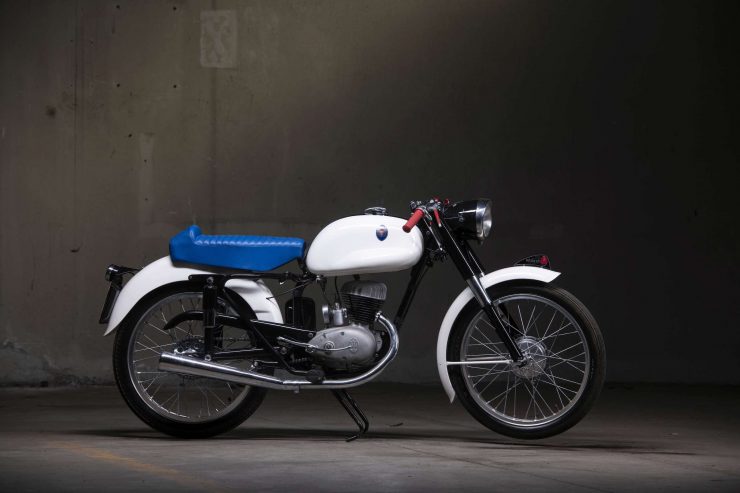 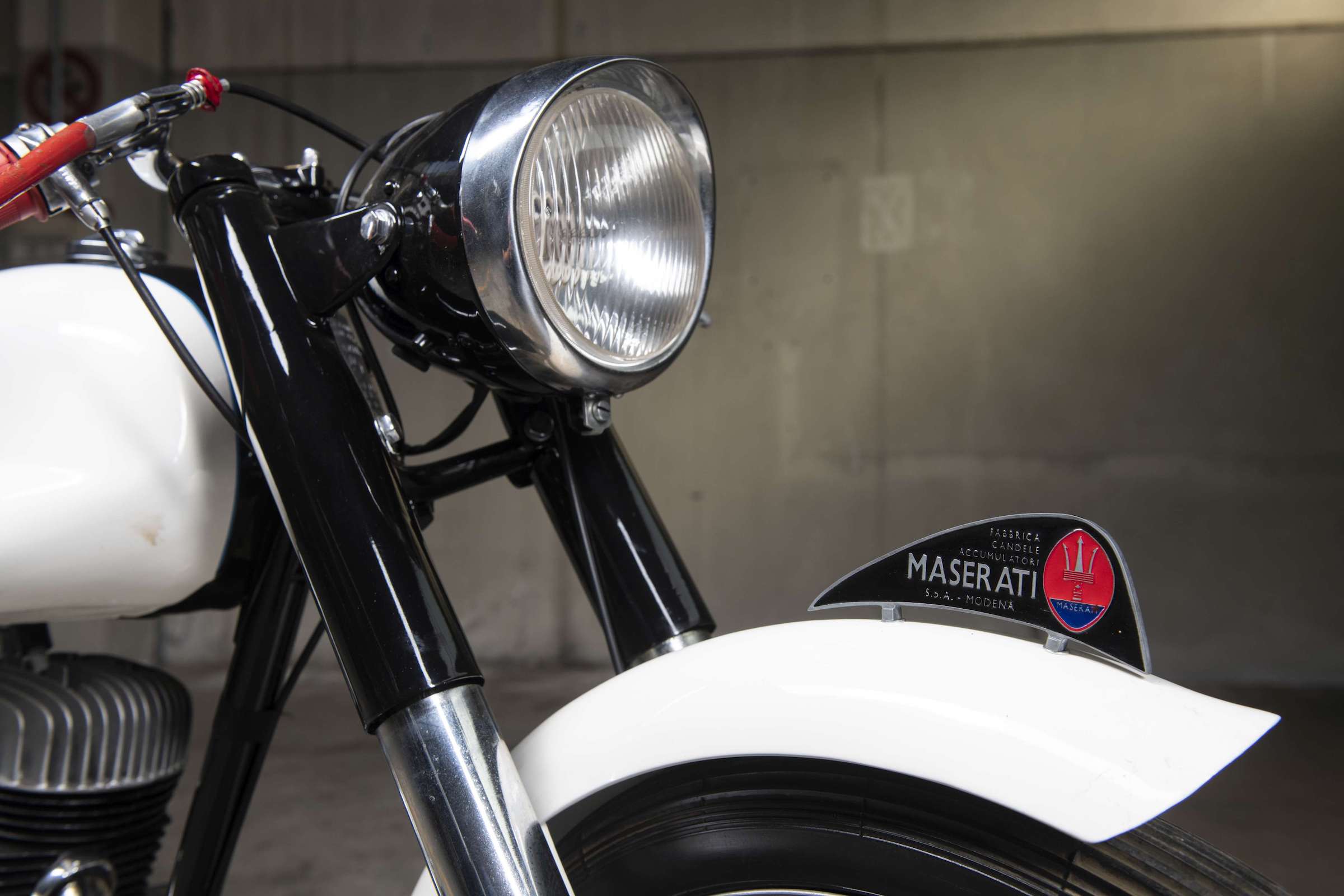