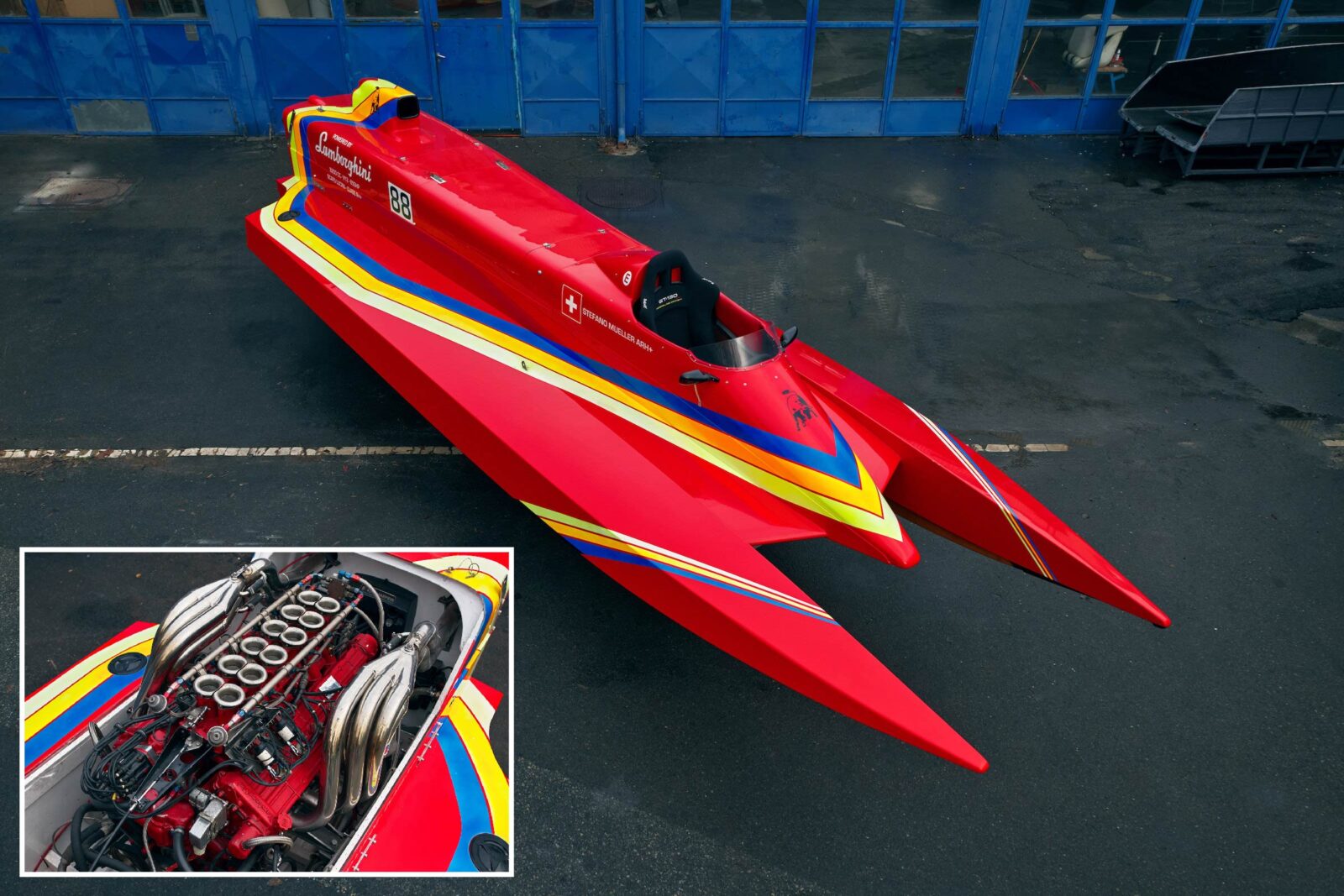 The Lucini Lamborghini Hydroplane was built by legendary Italian boat builder Lucini in 1992 for a Swiss businessman who wanted to compete in the Centomiglia del Lario (“One Hundred Miles of the Lake”) on Lake Como in Northern Italy.

The boat was designed and built not just to win, but to break existing speed records in the process. Ultimately this hydroplane would win the event outright on three occasions – 1992, 1993, and 1995 – incredibly it still to this day holds the speed endurance record for the event, at 195.434 km/h. 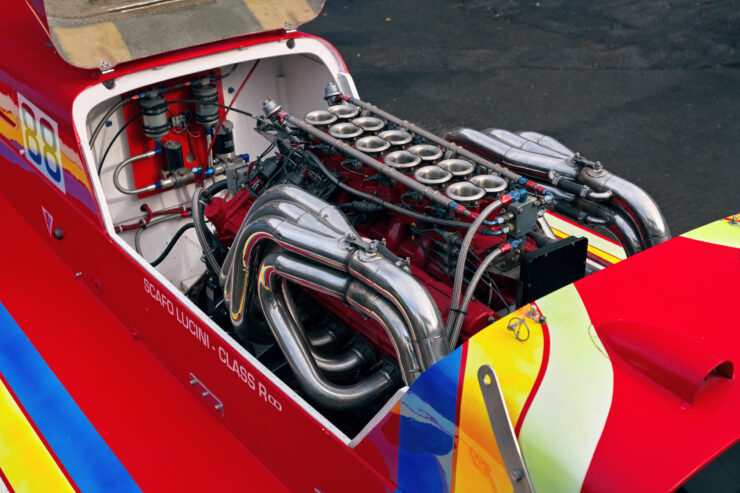 The Lamborghini marine V12 used in this hydroplane has a swept capacity of 8.2 liters and it produces 850 hp.

It’s widely known that Ferruccio Lamborghini started out making tractors before an argument with Enzo Ferrari over a clutch that kept failing led to him starting his own luxury automaker, becoming Ferrari’s largest rival in the process.

A few years after starting his automobile company Ferruccio had a Lamborghini Espada V12 fitted to a boat designed by Eugenio Molinari. He later had this engine fitted to a Riva Super Aquarama which he would personally pilot in the offshore race on the Adriatic Sea from Cervia to Pola.

A wealthy Swiss businessman approached Italian boatbuilders Lucini in 1992 to create him a vessel capable of taking on all comers and winning the Centomiglia del Lario. 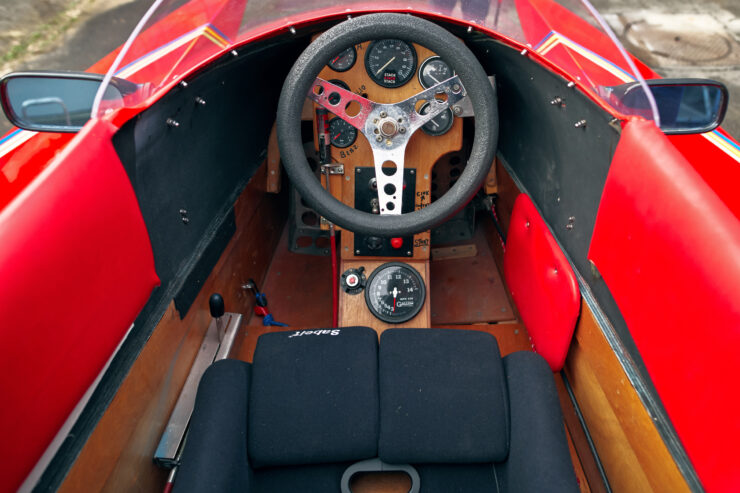 The open cockpit has seating for one, with an automobile steering wheel, the essential gauges, and a left-side throttle.

The hydroplane they developed would achieve its goal and more, taking three wins and setting the speed record that still stands today close to 30 years later.

With its strong, lightweight laminated marine mahogany hulls and its rear-mounted Lamborghini V12 the boat proved to be capable of speeds in excess of 230 km/h or 143 mph across the waters of Lake Como – beating the fiberglass boats it was competing against.

After its three wins in the event this hydroplane was placed on display in a private collection, and more recently it has been exhibited at historic race events, including the Sacca Racer Meeting and Campione D’Italia Gran Premio Mondiale F2.

This vessel is now due to roll across the auction block with RM Sotheby’s in early December with a price guide of $100,000 – $160,000 USD. If you’d like to read more about it or register to bid you can click here to visit the listing. 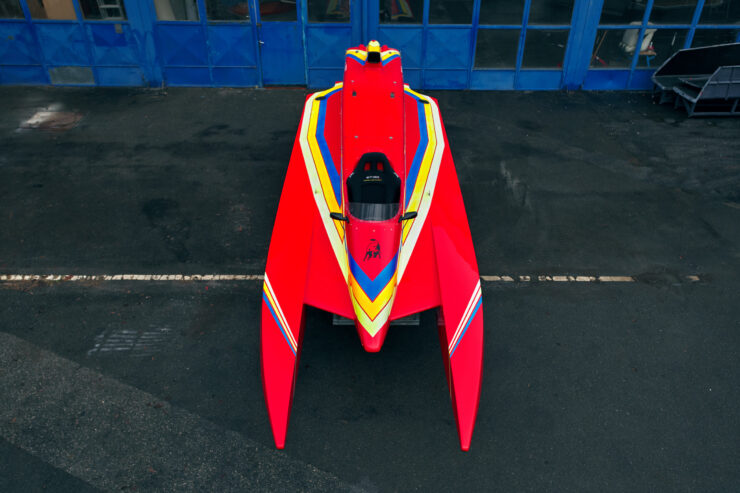 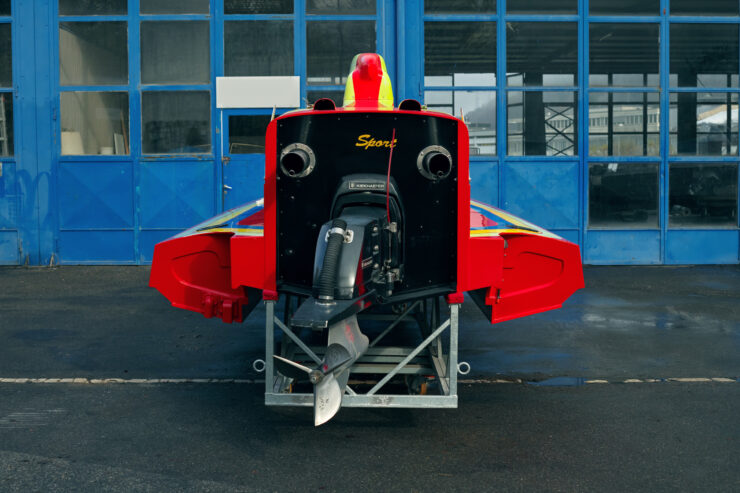 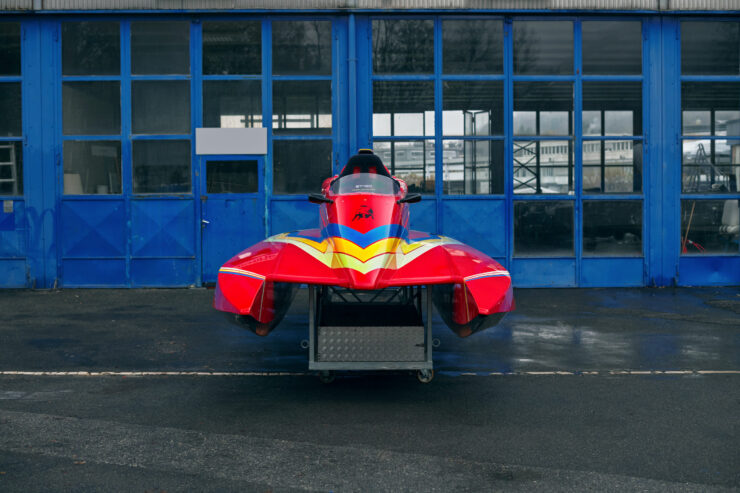 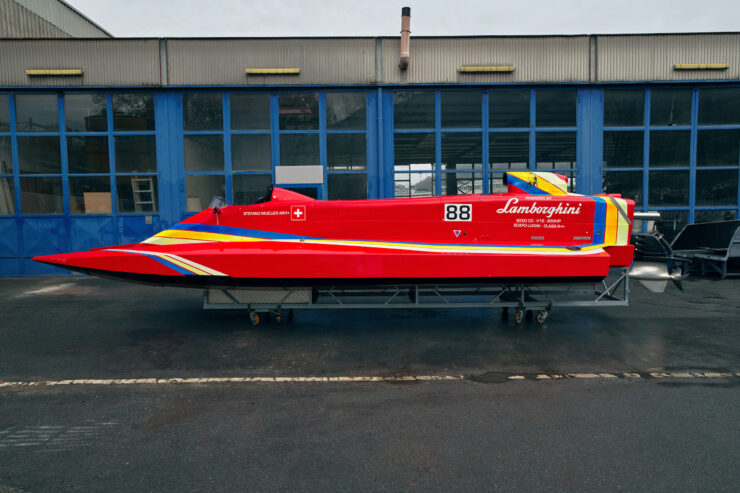 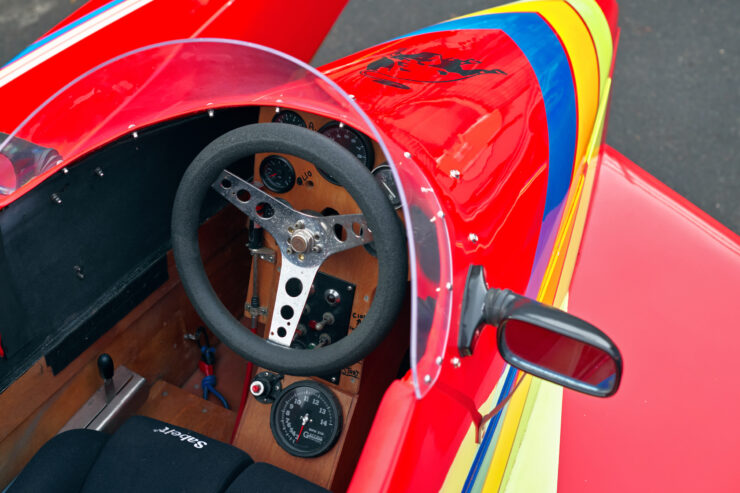 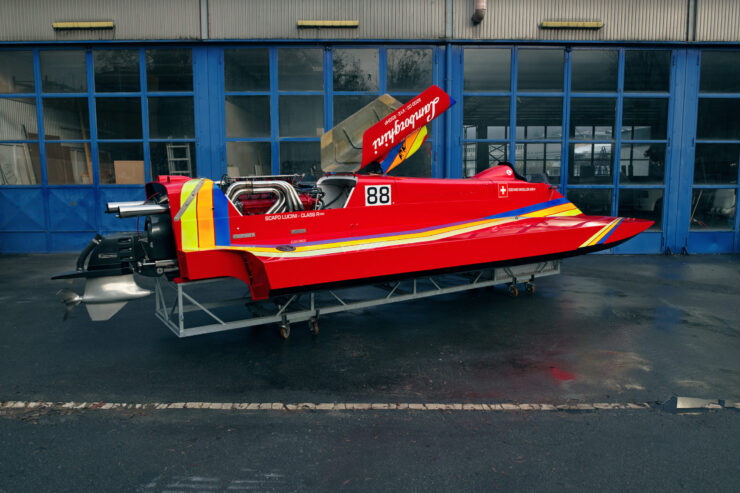 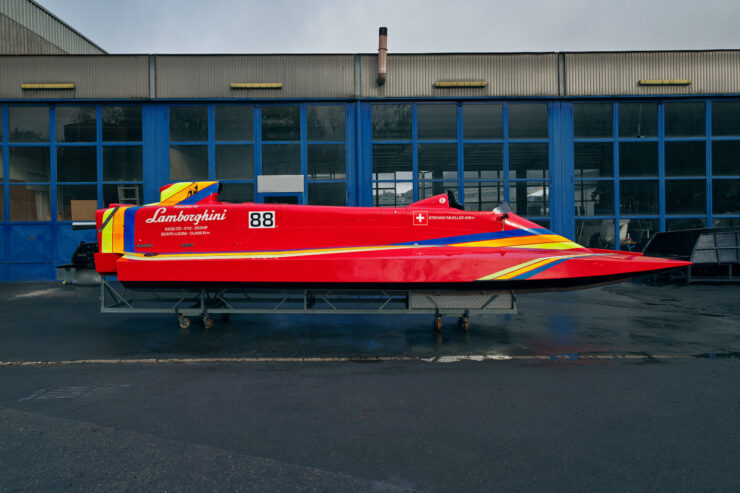 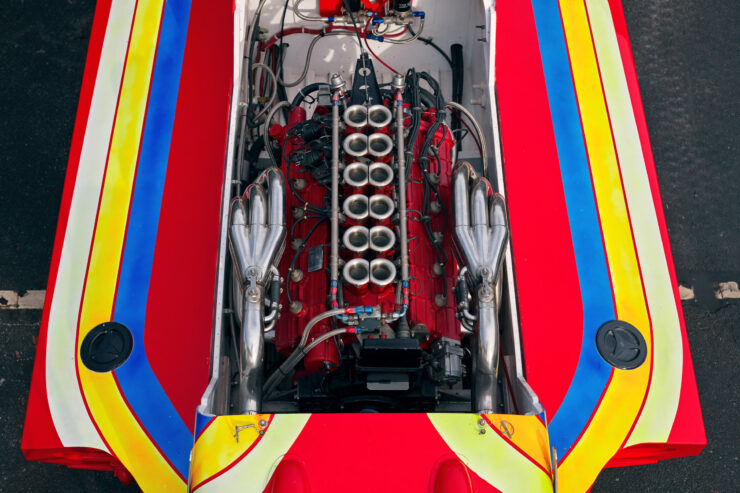 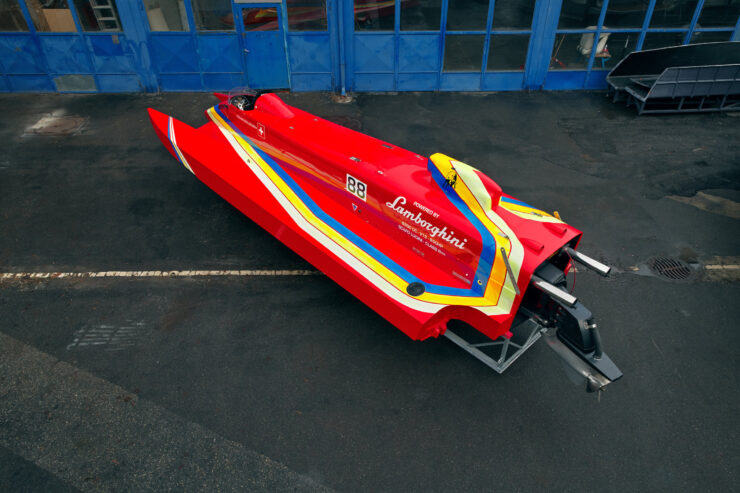 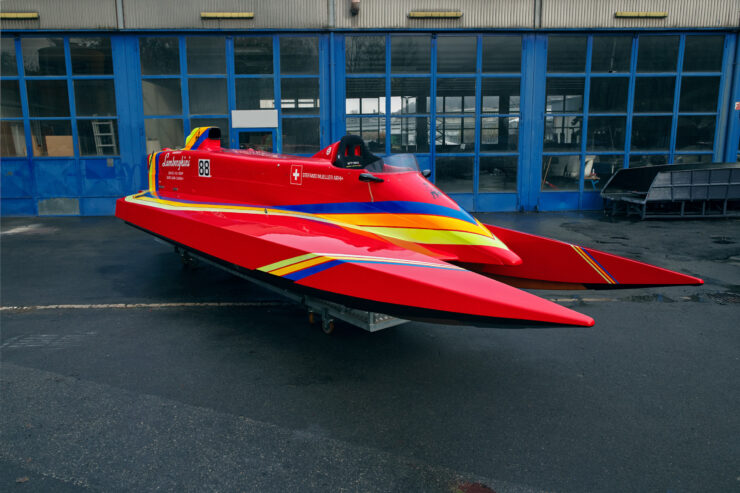 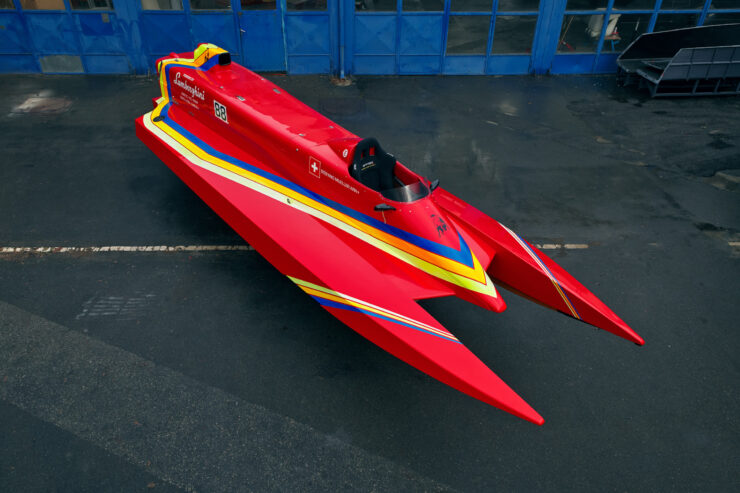