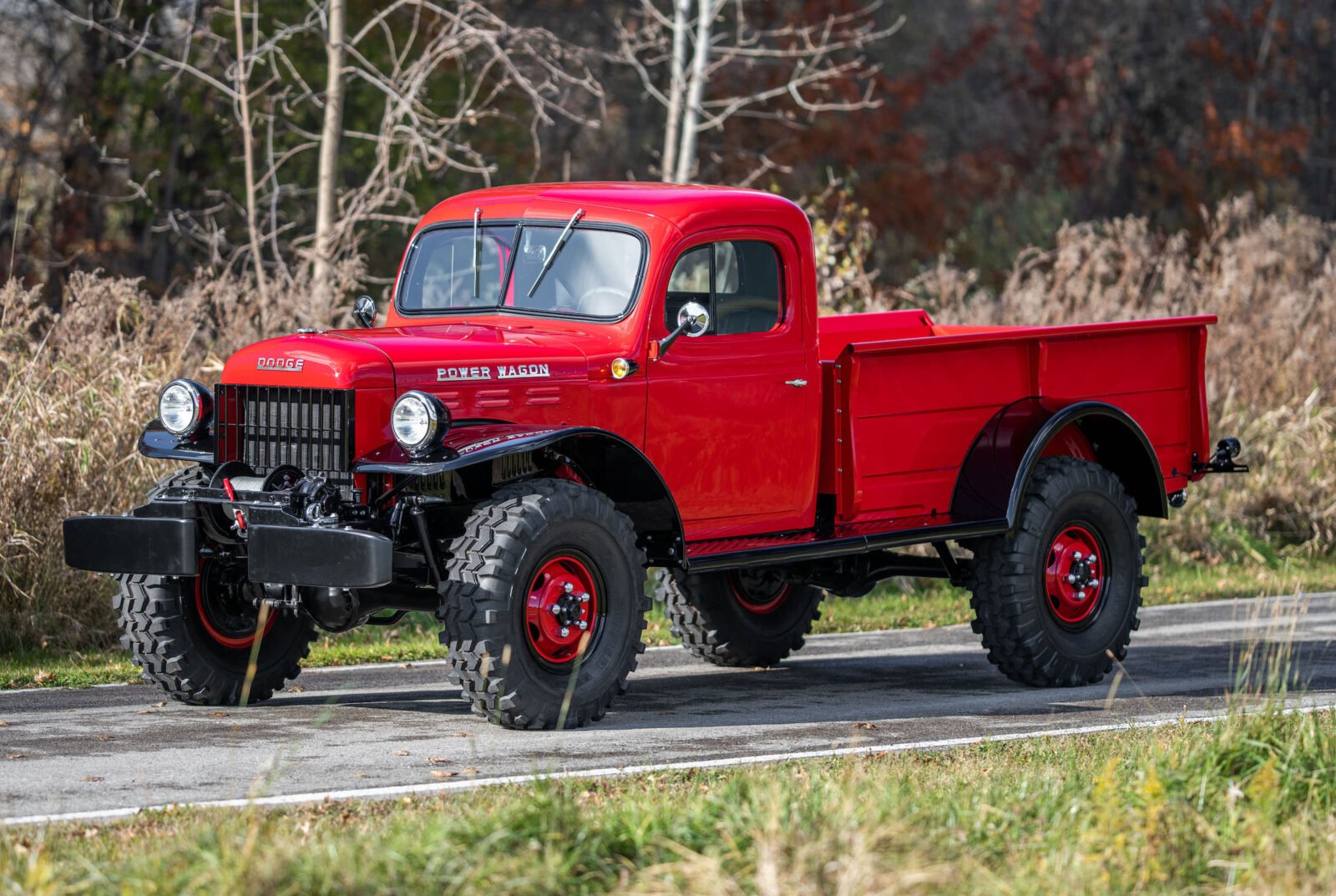 The Dodge Power Wagon was released to the general public in 1945 as America’s first mass-produced 4×4 pickup truck. It was closely based on the Dodge 3/4 ton WC series of military trucks built during World War II, trucks that developed a reputation both for their toughness and their ability to go anywhere.

So highly regarded were the Dodge 3/4 ton vehicles that General George Patton chose one as his own personal vehicle for use in Europe during the war, it was the Dodge WC Command Car variant that had been equipped to look almost like an oversized Willys Jeep.

Origins Of The Power Wagon

The Dodge 3/4 ton WC series were used extensively by American forces during WWII.

These trucks were able to carry far more than a standard Jeep yet could traverse most of the same terrain, and the WC series were able to be configured for a multitude of tasks including cargo carrying, radio operations, command operations, field ambulances, and more.

Above Video: This short film gives a great (albeit brief) insight into the history of the Dodge Power Wagon.

The WC series trucks were designed to be simple to build and maintain, they used body on chassis construction, with a simple steel body, a reliable inline-six cylinder gasoline engine, and a heavy duty two-speed transfer case mated to a four-speed transmission.

GIs quickly realized the value of the WC trucks, and they provided much of the cargo-carrying infrastructure over land that was required as Allied forces fought their way through Europe on their way to toppling the Third Reich.

By 1945 executives at Dodge were looking at ways to commercialize the WC trucks for civilian use and they struck upon the same realization that the creators of the Land Rover and Unimog would have at around the same moment in history.

This realization that all of the military capabilities of these four-wheel drives would also make them ideal for agricultural use – particularly with the addition of a mechanical power takeoff so that farmers could operate a wide variety of equipment, from threshers and fence post diggers, to wood saws and harvesters. 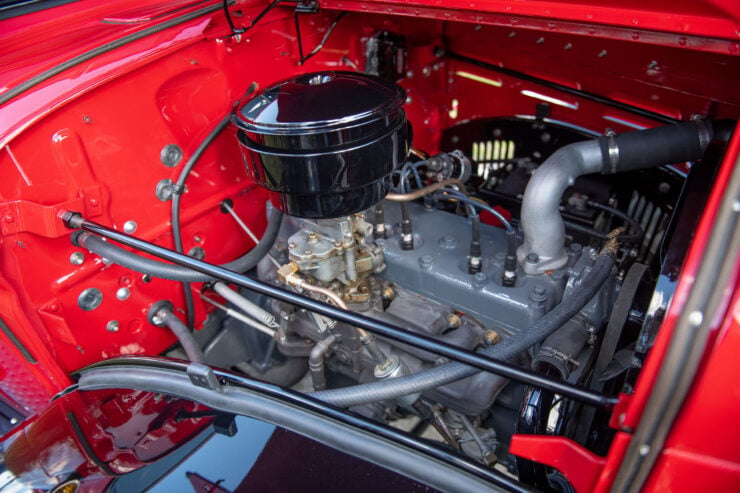 The Dodge 230 cubic inch (3.76 liter) flathead inline-six sends power back through a two-speed transfer case to a four-speed manual transmission.

A civilian version of the WC truck was developed with a fully enclosed cab, wind up windows, improved seats of the military version, and a red and black paint scheme that would become inextricably linked to the model.

They called it the Dodge Power Wagon and it was released in 1945.

The Power Wagon you see here is a 1951 model that benefits from a comprehensive restoration back to largely original condition.

As you would expect it’s been finished in its original colors of red over black, and it has a black leather interior with matching door cards and fitted floor mats. In the rear you’ll find a truck box fitted with high-gloss wood and stainless bed strips.

Under the hood there is a correct 230 cubic inch flathead inline-six gasoline engine sending power back through a two-speed transfer case and four-speed manual transmission. That transfer case gives the truck both high and low range gearing of course, helping to further increase the off road capabilities of the truck.

As you would expect this Power Wagon has the original front and rear power takeoff for powering machinery, and it’s fitted with Super Swamper tires.

RM Sotheby’s will be offering this truck as part of its Open Roads sale in December, the price guide is $75,000 – $85,000 USD and you can click here if you’d like to read more about it or register to bid. 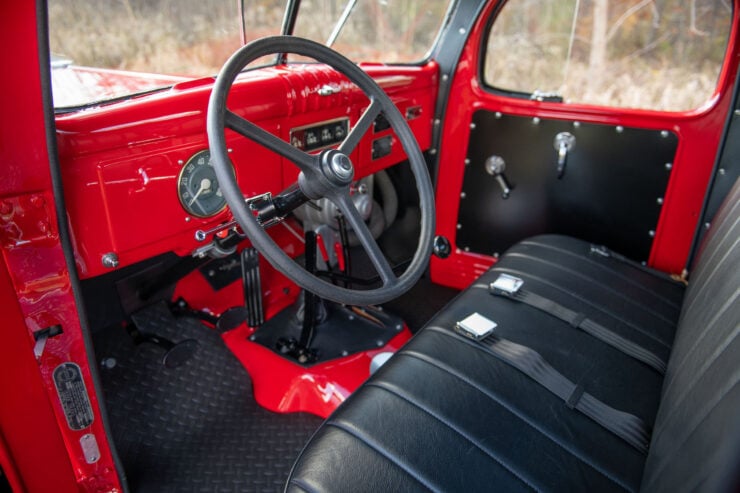 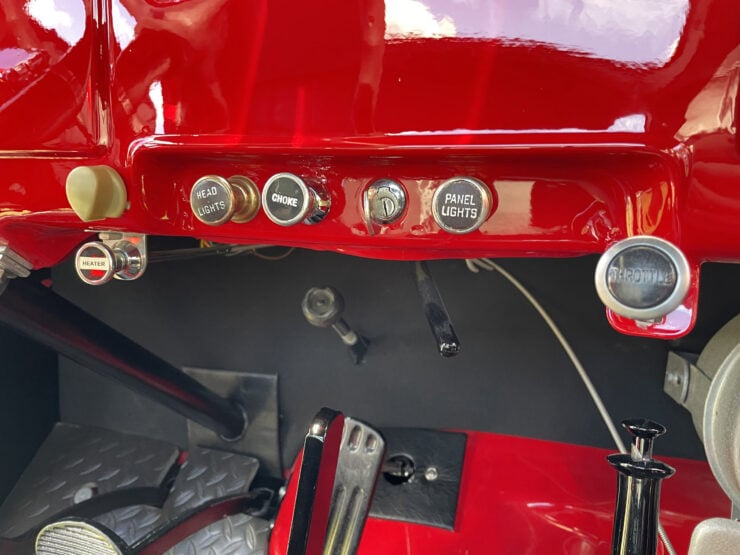 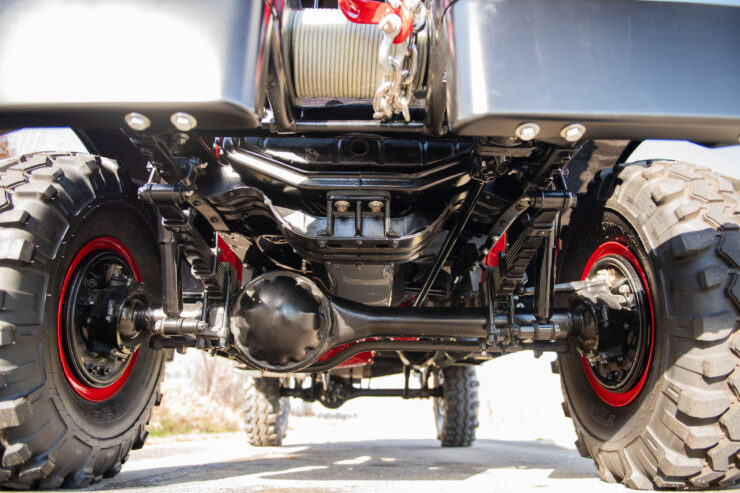 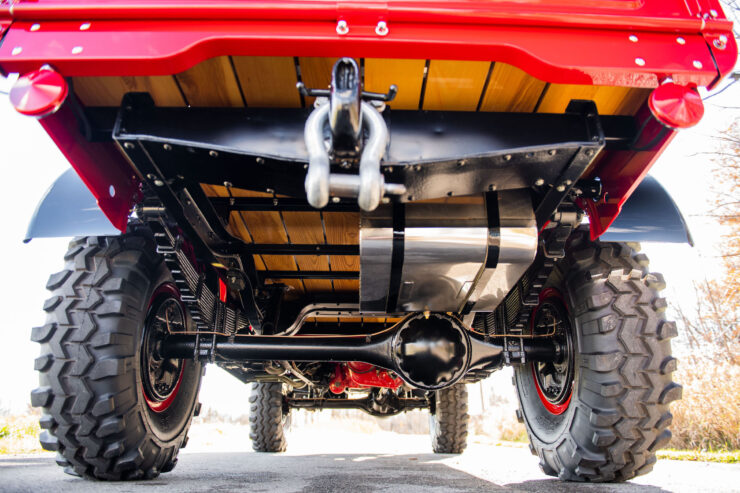 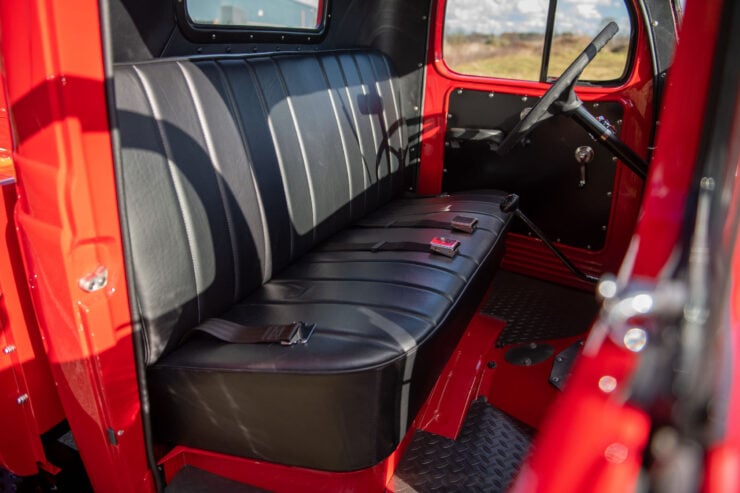 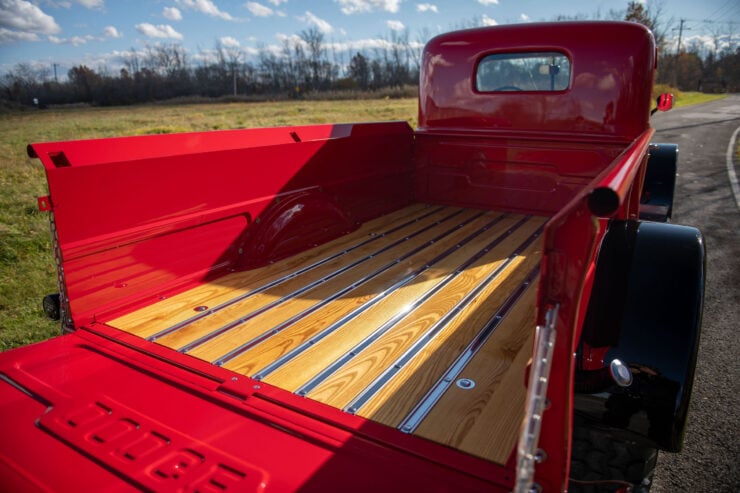 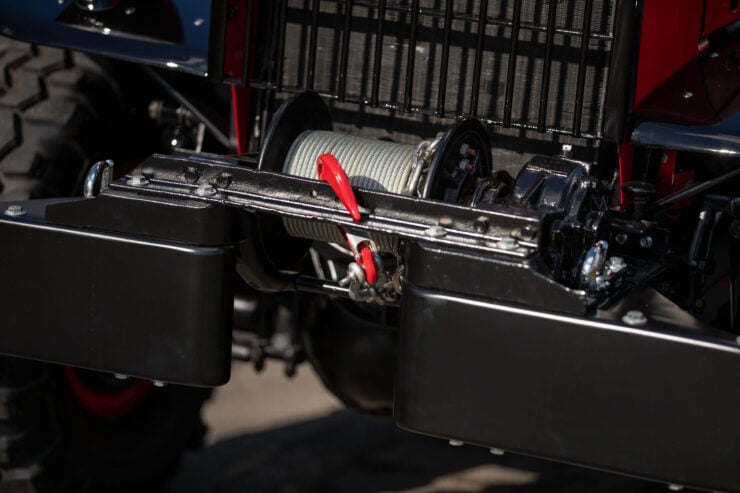 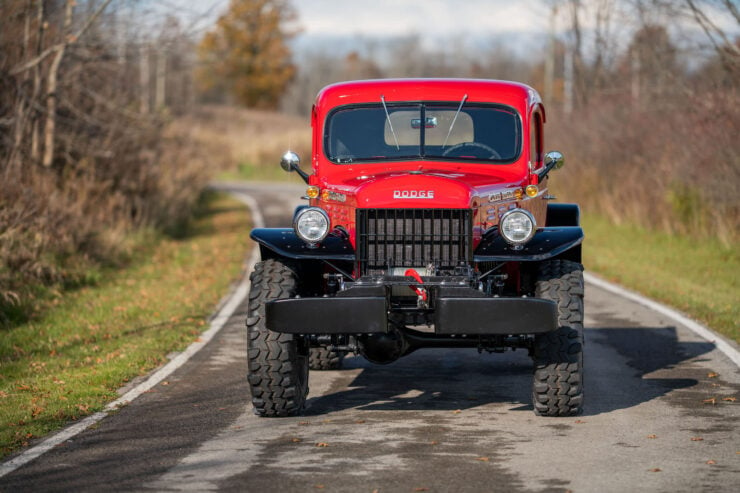 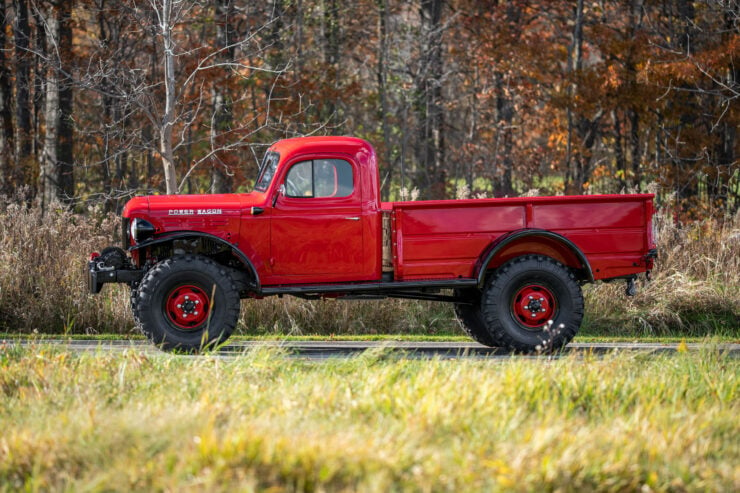 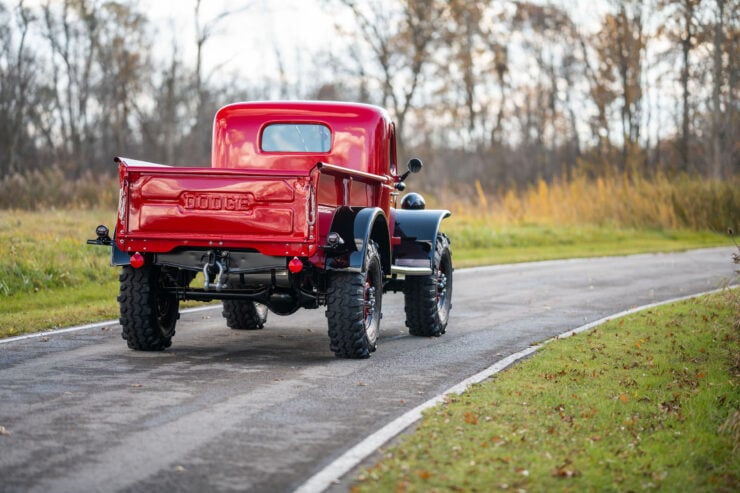 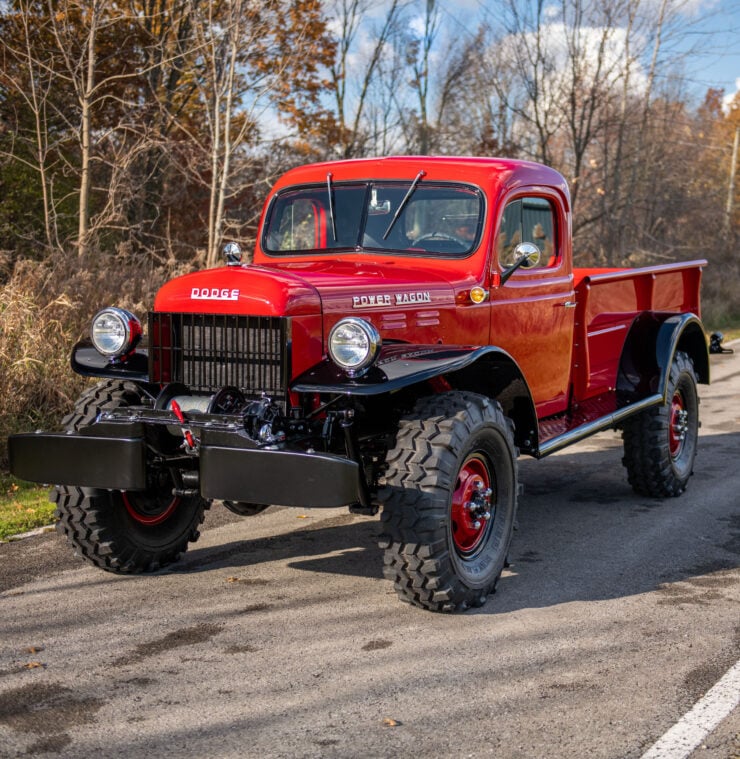 Published by Ben Branch - December 7th 2021
Related Posts
The Rare Venturi 300 Atlantique: 1 Of 57 Ever Made