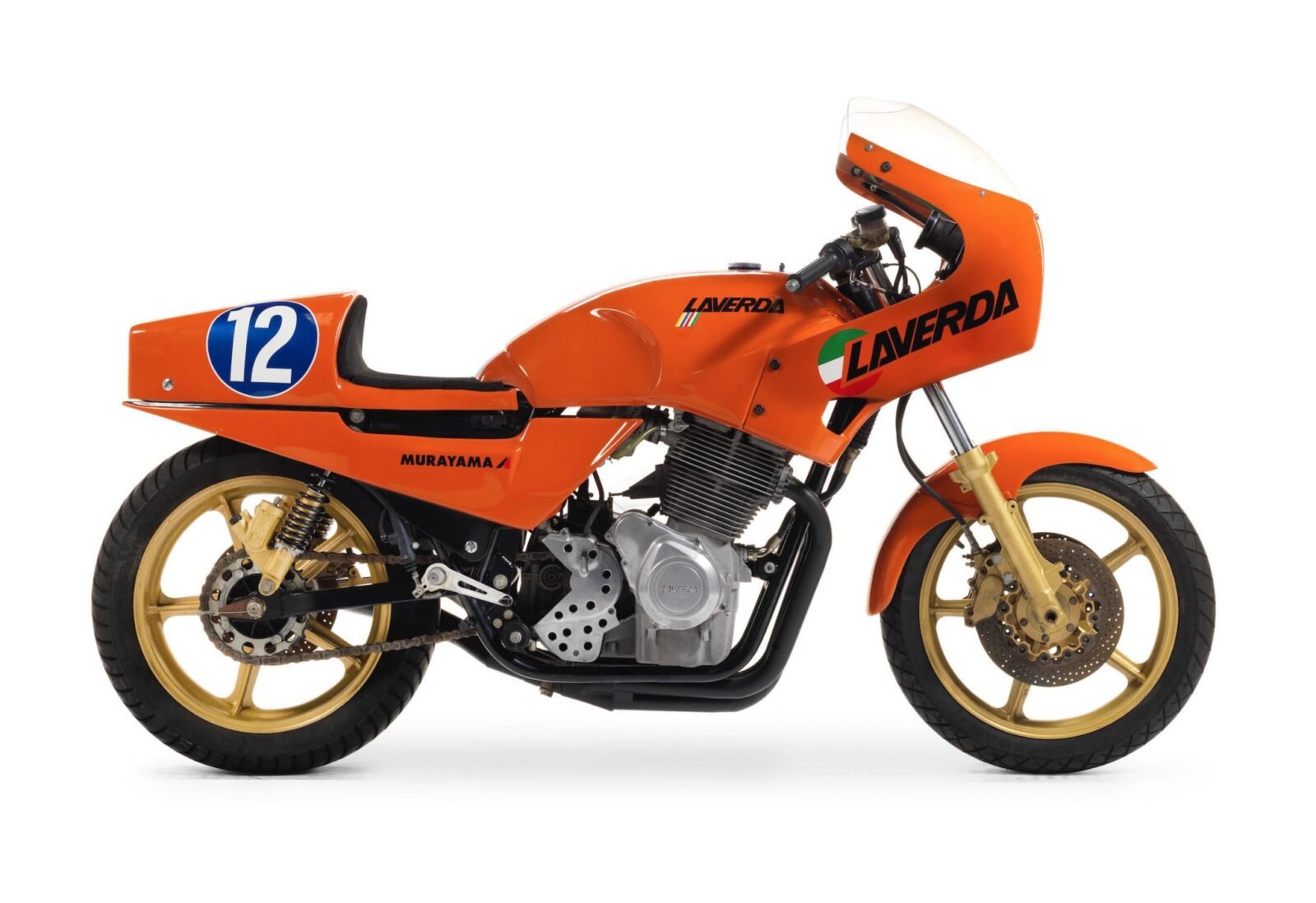 It’s thought that just 4 examples of the Laverda TT1 RGS Corsa semi-works racer were ever built, they were shipped to factory-approved racing teams in Italy, Belgium, Australia, and Japan where they were raced against the best in the world.

The 1980s were a difficult and tumultuous time for Laverda, but few would disagree that this motorcycle represents one of their crown jewels – or that it would make an ideal platform for entering the world of classic motorcycle racing.

A Brief History of the Laverda RGS

In the late 1970s the Italian marque Laverda had the unique distinction of building the world’s fastest production motorcycle – the 1000cc Laverda Jota. The bike was actually suggested by British importers Slater Bros. of Collington near Herefordshire, and due to the fact it was factory-fitted with a range of race components it produced 90 hp and could hit speeds of 146+ mph – heady figures for 1976.

By the early 1980s the fast-pace of motorcycle development that characterized the ’70s and ’80s had left the Laverda a long way down the pecking order from its formerly illustrious perch atop the mound of the fastest bikes in the world. Something had to be done, so the engineers set to work developing a new, lower frame with a rubber mounted three-cylinder engine – now with 120 degree crank timing in place of the original 180 degrees.

As a three-cylinder bike, the 120 degree crank gave it perfect primary balance, albeit with a less savage demeanor than its 180 degree forbear. The model was offered in a few major variants, including the “Executive” and the more feisty 95 hp Corsa – the latter being the motorcycle that would form the basis for the factory semi-works racer you see here. 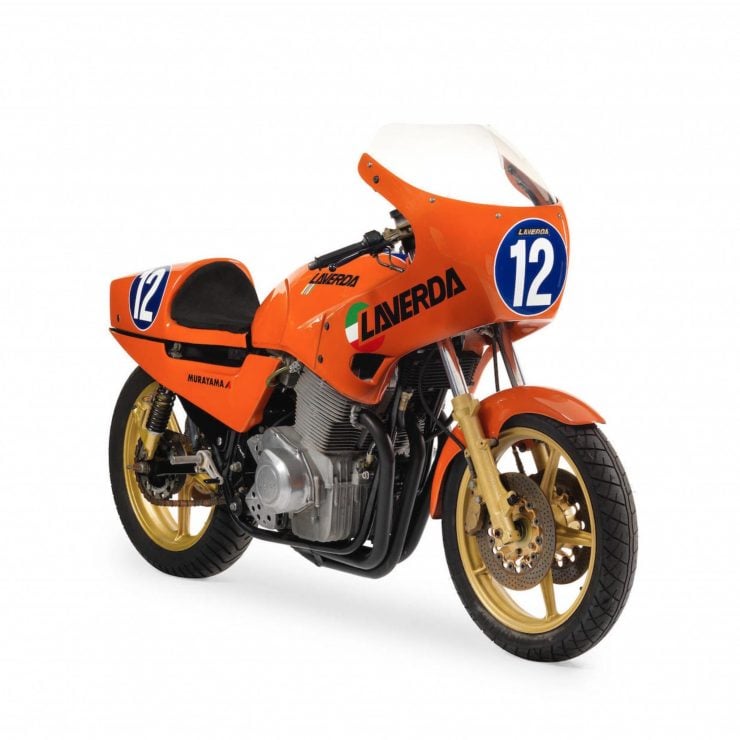 First offered for sale in 1982 the Laverda RGS was over $1000 USD more expensive than its competitors from Japan, it was also a little slower in a straight line due to its slightly lower engine capacity. It didn’t sell particularly well, just 2,500 were sold, although exact numbers aren’t entirely certain, as records weren’t preserved particularly well after the change of ownership from the Laverda family in the late 1980s.

Today, the surviving examples of the Laverda RGS change hands for considerably more than their Japanese competition from the early 1980s, obviously this is largely because they’re more rare, however the styling, handling, and rich engine character all draw in prospective owners more than any promise of exclusivity.

The Laverda you see here is one of 4 built for independent racing teams in the early 1980s by the Laverda factory. It was based on the racer built by Laverda a year earlier in 1982 to compete in the Italian TT1 championship, fitted with a race-spec engine including racing cams, pistons, a heavy duty clutch, valves, and carburetors, with a racing gearbox. For weight reduction it was fitted with magnesium alloy fork sliders, Campagnolo wheels, and a fibreglass tank and bodywork.

This one-off factory racer from 1982 had shown considerable potential, so in 1983 the factory built 4 further examples, as well as 6 additional engines for customers in Europe and around the world. The RGS Corsa you see here is thought to be the one that was shipped to Japan – originally painted bright red like many of the street legal Laverda RGS road bikes were at the time.

If you’d like to read more about this Laverda or register to bid you can click here to visit its listing on Bonhams. It’s due to be auctioned at the Autumn Stafford Sale on the 15th of October, and it’s estimated to be worth between £30,000 and £50,000. 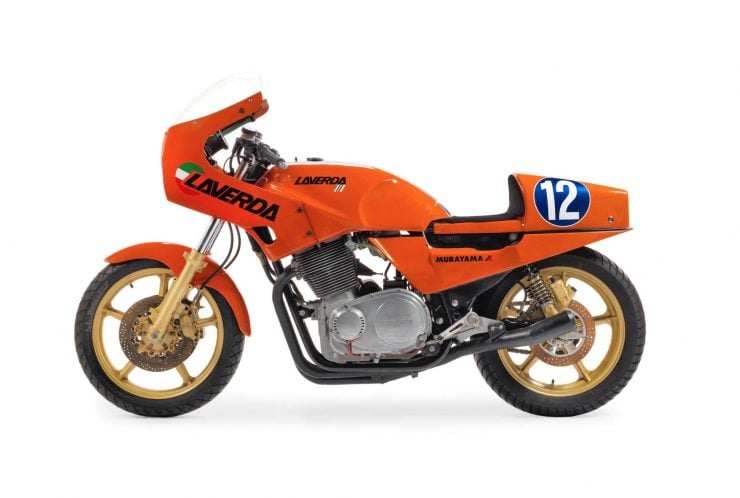 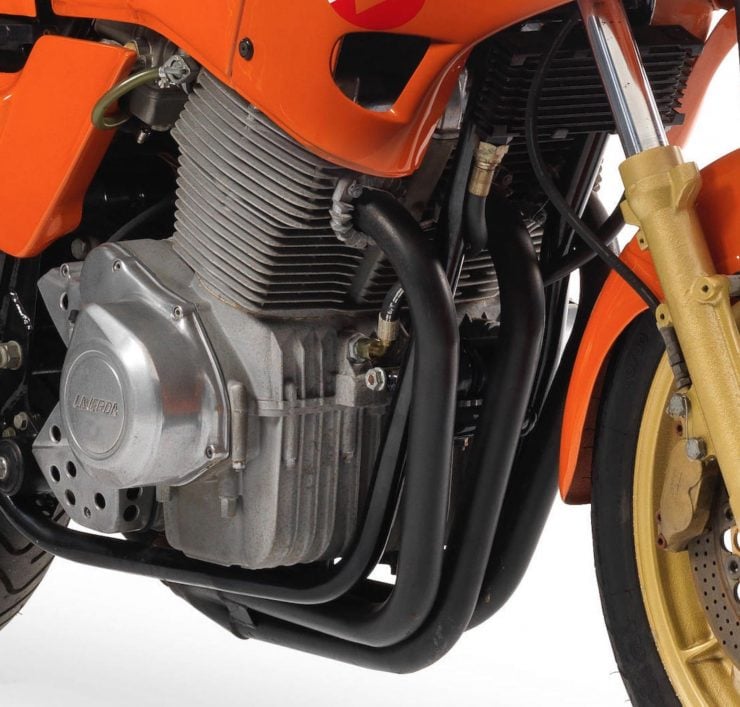 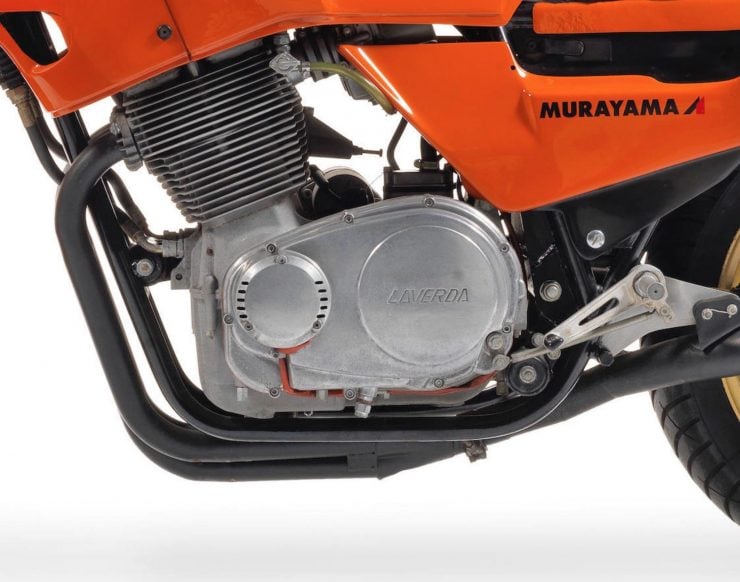 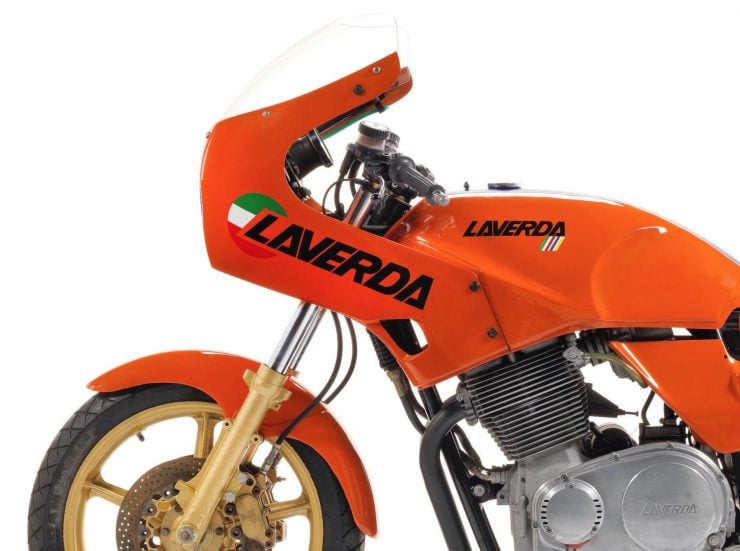 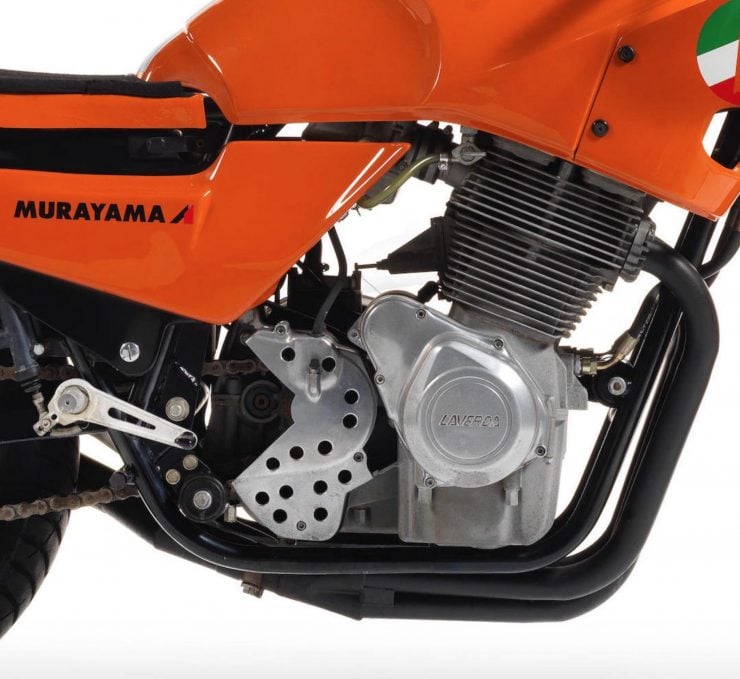 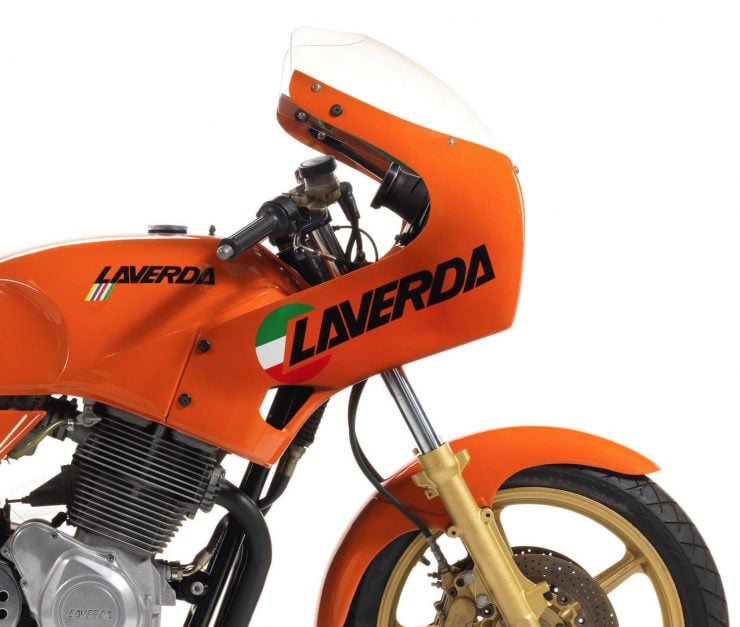 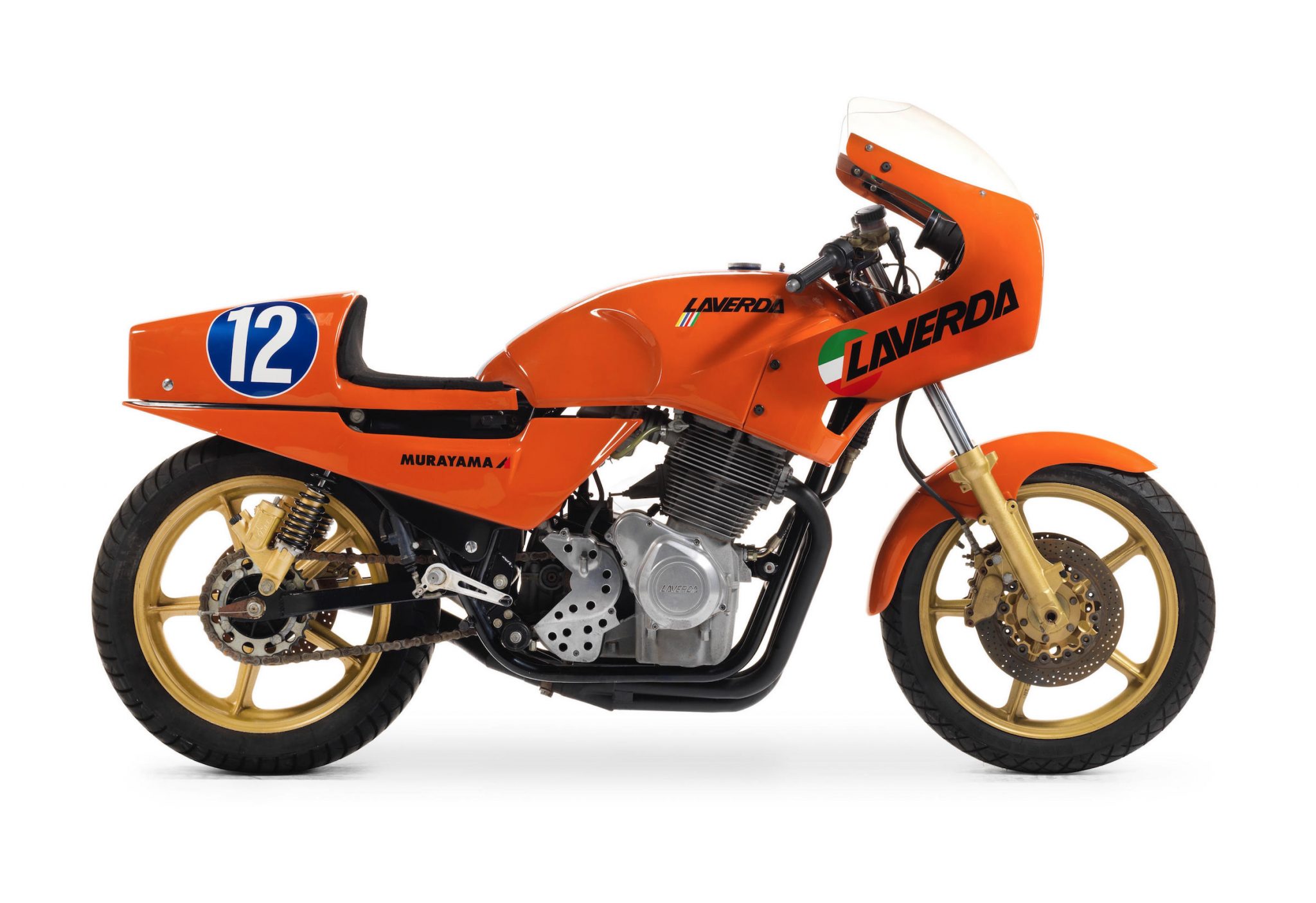