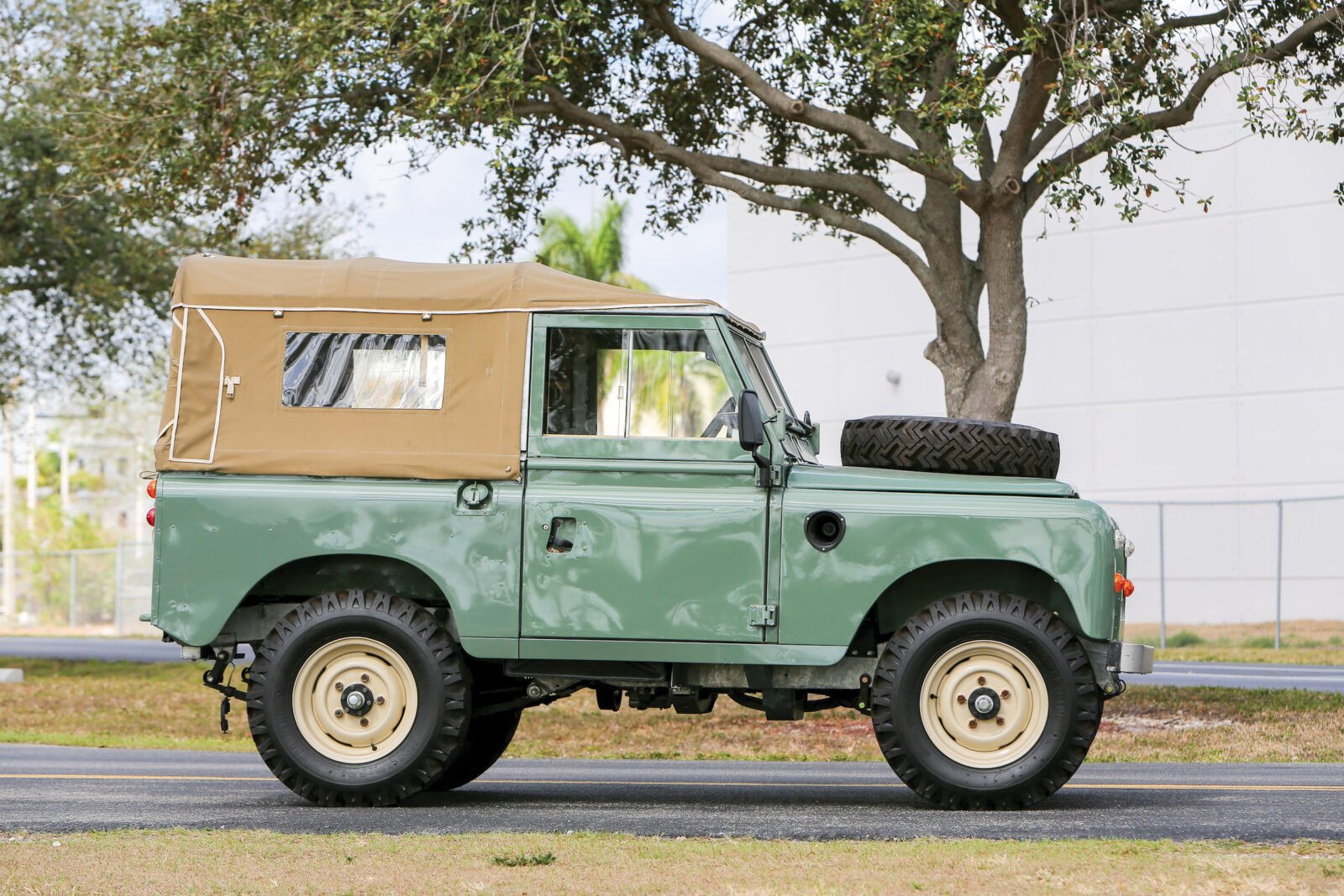 The Series III Land Rover was the last to wear the “Series” designation, and some view it as the last of the original Land Rovers. Ever since the first Series I had rolled off the production line in 1948, Land Rover had been constantly updating the design to improve its capability off road, its usability on road, and its reliability. The Series I was built between 1948 and 1958, it was then replaced with the significantly updated Series II which was built between 1958 and 1961, before being replaced with the more refined Series IIA.

The Series III made its first appearance in 1971, and in many respects it was an incrementally updated Series IIA. The changes were more subtle things like a new dashboard, a synchromesh gearbox, and a higher compression ratio giving more power.

Many Land Rover aficionados consider the Series III to be the best model if you want balance between originality and day-to-day convenience. One of the great benefits of the Series Land Rovers is their aluminium bodies that were light weight and obviously don’t rust, although that said, they were fitted with steel chassis and bulkheads that were susceptible to the same corrosion problems as their Japanese and American counterparts.

In recent years we’ve seen a surge in popularity around vintage 4x4s, with a huge amount of attention focussed on vehicles like the original Ford Bronco, the Toyota FJ40, the 2-door Range Rover Classic and the Series I/II/III Land Rovers. This trend shows no signs of abating, in fact it’s widely believed that it’ll be the next sector of the vintage car market to see sustained gains in value. 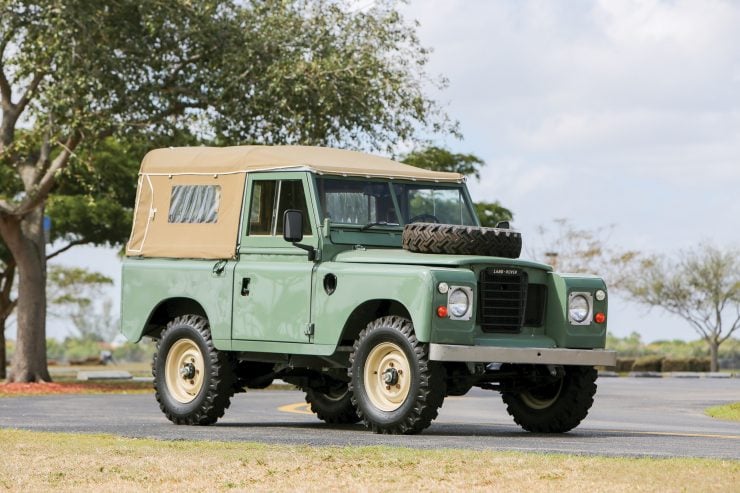 The Series III you see here is one of the nicest examples we’ve seen in recent memory, it’s had a complete frame-off restoration, with a range of upgrades throughout to make it far easier to live with on a day to day basis. The steel chassis has been galvanized, solving one of the major potential headaches with any vintage 4×4 that spends time off road getting covered in mud and water.

A new canvas roof has been fitted over the new Land Rover Green paint work, colors like this have become deeply associated with the brand however when they were first being painted in the late 1940s the only paint colors available were army green hues, as the paint was military surplus from WWII.

Inside the passenger compartment, the Series III is far better appointed than it would have been from the factory, with tan upholstered seats in the front and rear, upholstered door panels, tan gear lever boots and checker plate panels on the floors of the footwells.

As you’d expect with any vintage Land Rover, this one has its spare tire mounted on the hood, with steel wheels all-round and traditional chunky tires for green laning.

RM Sotheby’s will be auctioning this Land Rover off on the 6th of April with an estimated value of between $25,000 and $30,000 USD, if you’d like to read more about it or register to bid you can click here to visit the listing. 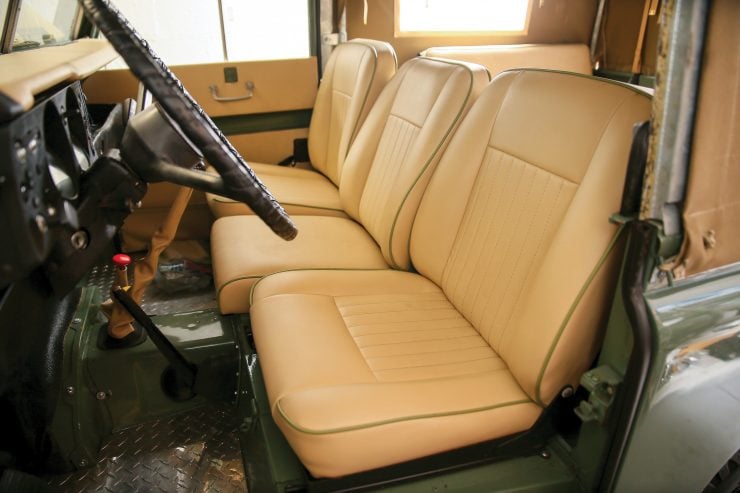 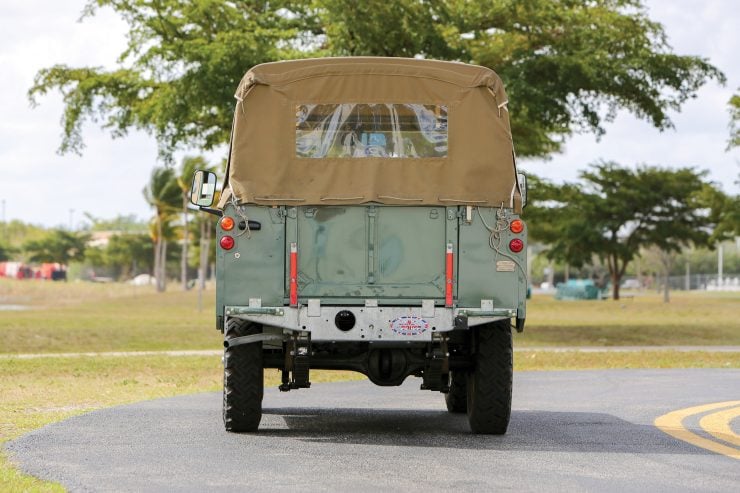 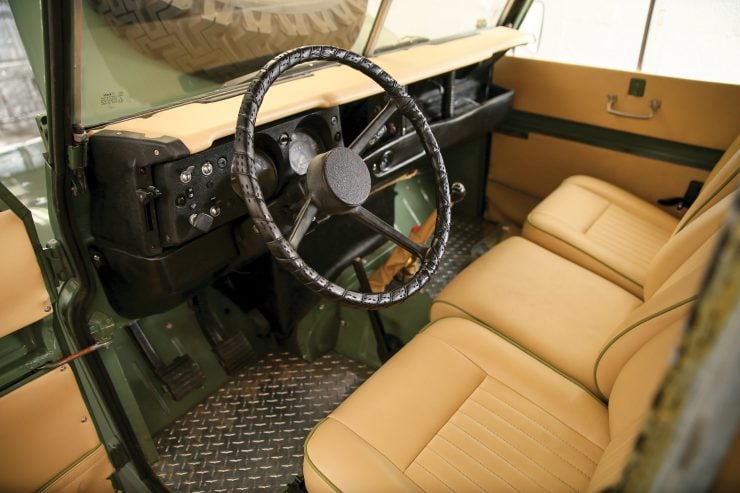 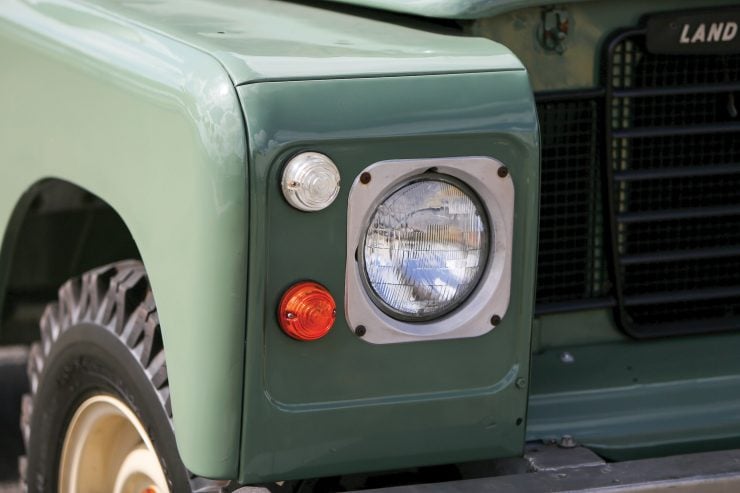 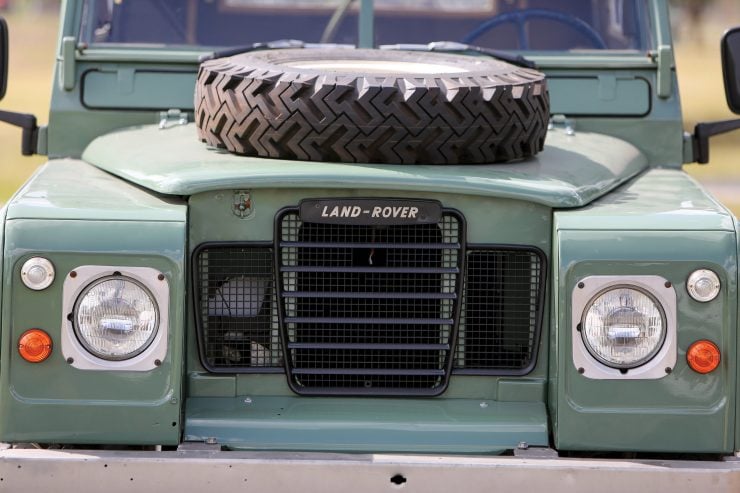 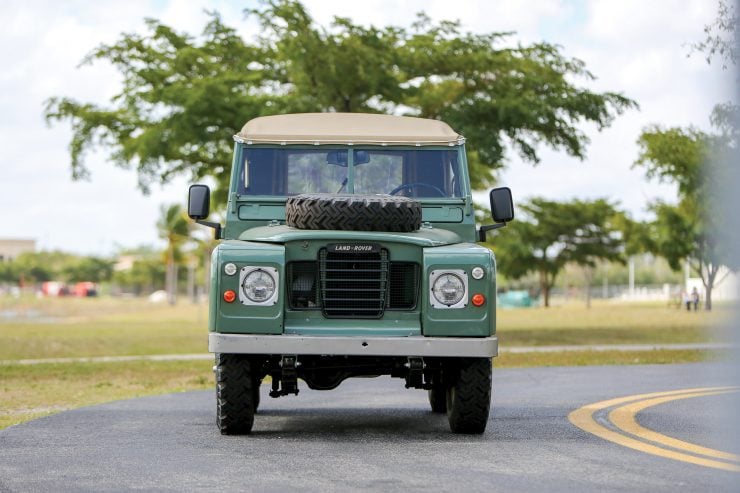 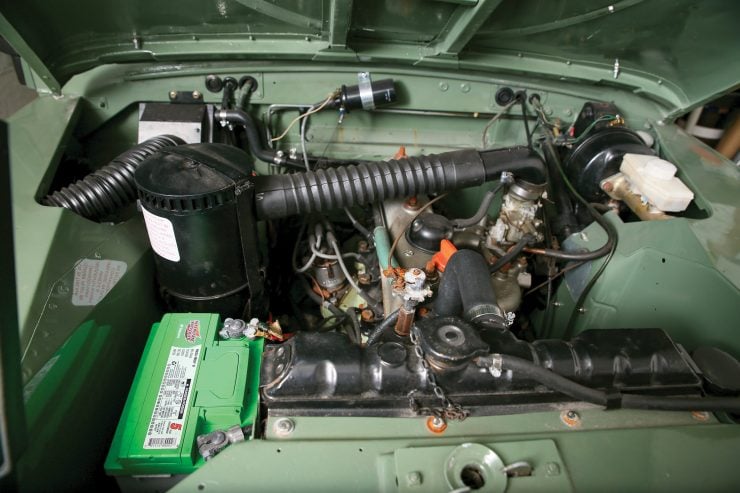 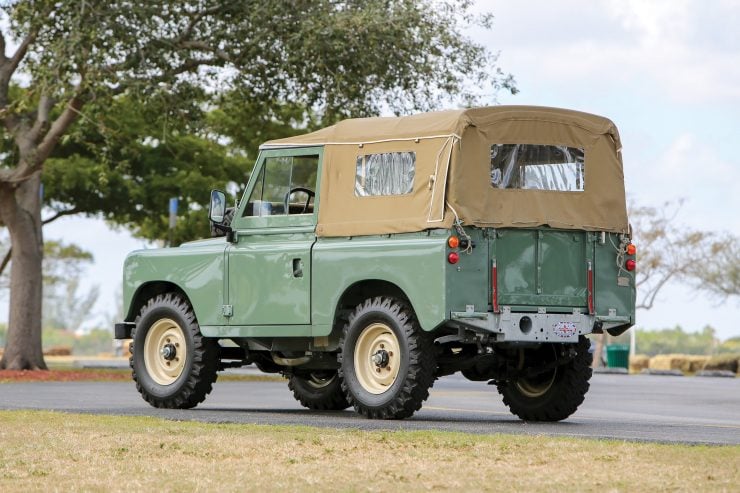 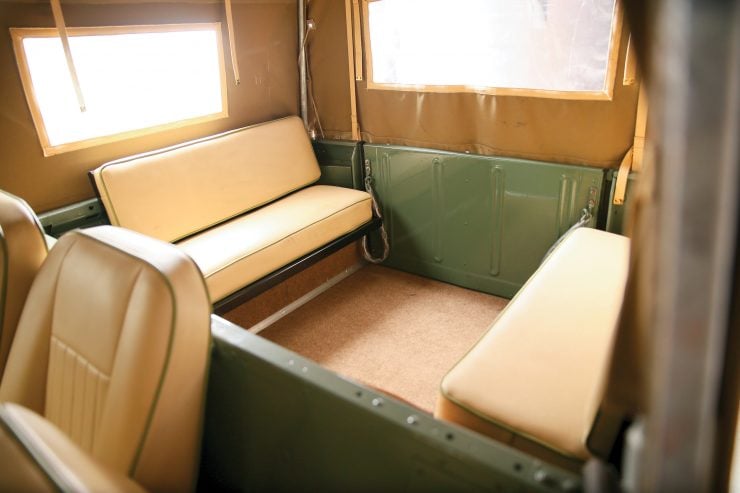 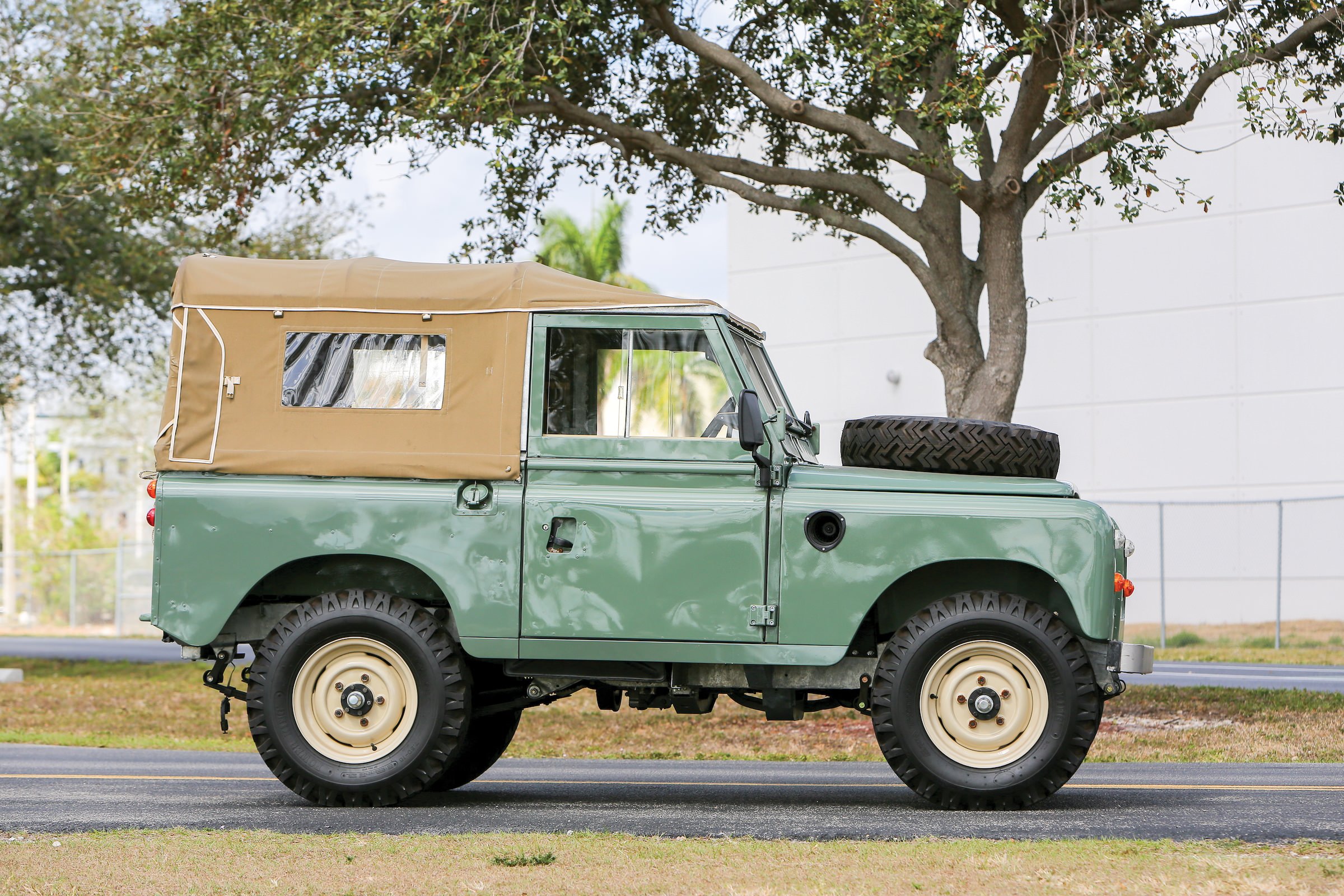