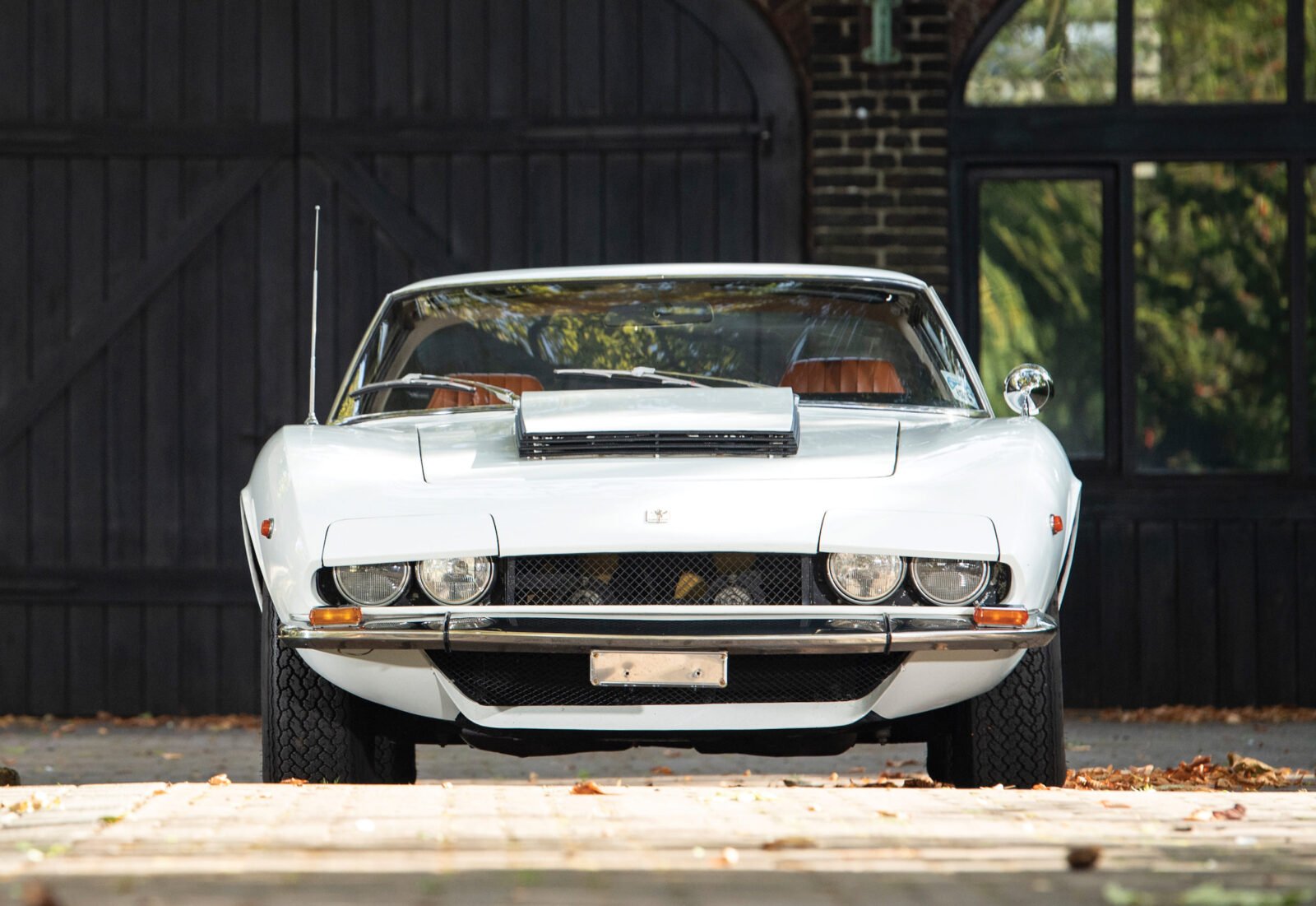 The Iso Grifo GL Series II was the upgraded second iteration of the Iso Grifo GL – a car that had been developed by the Giotto Bizzarini, the father of the Ferrari 250 GTO, with a body designed by Giorgetto Giugiaro, a man widely believed to be the greatest car designer of the 20th century.

While examples of the Ferrari 250 GTO now sell for $50+ million USD, it’s still possible to pick up an Iso Grifo GL for approximately 0.4% this figure, and thanks to the mechanical simplicity of the drivetrain the Grifo can be worked on by almost any mechanic in America.

A Bubble Car, Then A Muscle Car

Back in the 1950s if you’d told someone that Iso would be building some of the most desirable sports cars in Italy within 10 years they’d have thought you were going soft in the head.

Iso had started out making refrigerators before switching to small-capacity motorcycles and scooters after WWII. Their first production automobile was the Iso Isetta bubble car which was licensed by other manufacturers around the world including BMW, the latter built over 130,000 of them in post-WWII Germany, helping to revive the brand and bring in some much needed revenue. 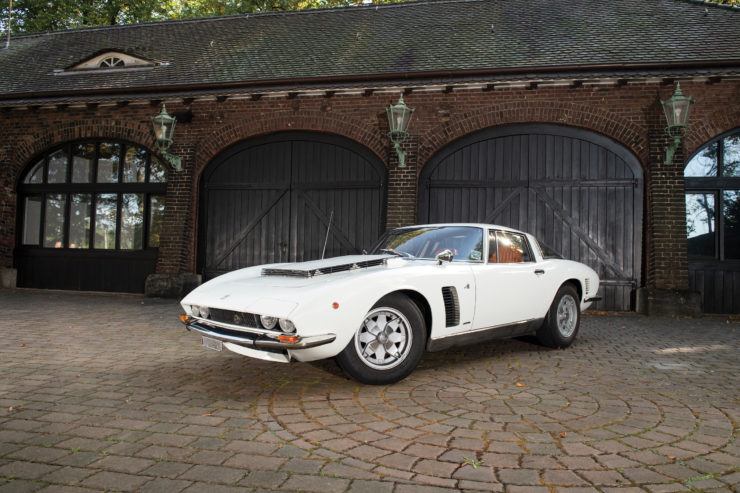 Iso founder Renzo Rivolta had always dreamed of building high-performance sports cars and in the early 1960s he got his chance. He assembled one of the greatest teams of the era including Giotto Bizzarini and Giorgetto Giugiaro with Bertone, together they created the Iso Rivolta IR 300. The car was first publicly shown at the Torino Motor Show in 1962 and it proved to be a modest success, which allowed further models to be developed.

One of the keys to the success of Iso was the decision to use tried-and-tested American V8s rather than spend a small fortune developing their own engines. This allowed the company to build cars that could compete with the likes of Ferrari, Jaguar, Lamborghini, and Aston Martin without the need to design and build their own drivetrains.

American V8s were chosen for their reliable nature, their prodigious power output, and their simplicity. A number of other manufacturers used this same basic formula to create some of the most famous cars of the era including the Shelby Cobra, the Sunbeam Tiger, the Apollo 3500 GT, the Jensen Interceptor, and many others.

After the Iso Rivolta IR 300 the company released a number of other models including a few variations on the Grifo – probably the car that the company is best known for today. 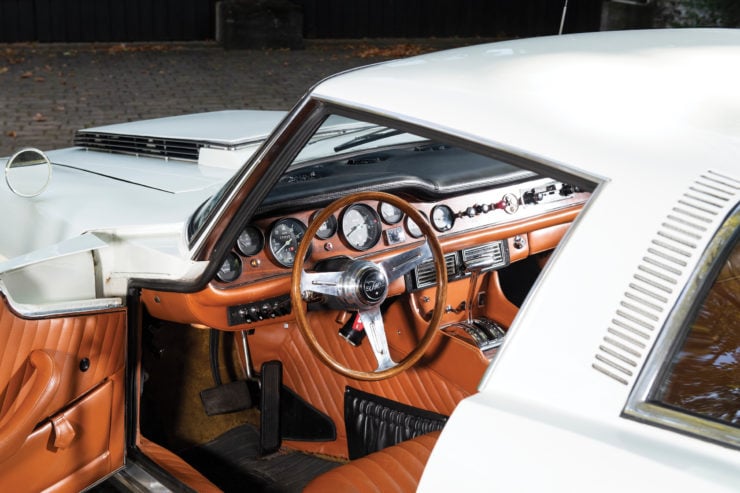 The first version of the Iso Grifo was released in 1965 with a Chevrolet small block 327 cu. in. Corvette V8 (5.4 litres) offering between 350 and 400 bhp, coupled to a Borg-Warner 4-speed top loader transmission. This engine would later be upgraded to the mighty 454 cu. in. (7 litre) V8 before being changed on last time to the venerable Ford 351.

With its world-class design, excellent handling, remarkable power output, and a luxurious Italian interior, the Iso Grifo GL was a strong competitor for its Italian rivals. As with many other marques in the mid-1970s the Oil Crisis quickly collapsed the market for thirsty sports cars, sales dried up, and the company was shuttered. There have been a few attempts to resurrect it in recent years but at the time of writing none have been successful.

The 1973 Iso Grifo GL Series II you see here is one of the later models fitted with the Ford 351 Cleveland V8 and a 3.31:1 rear axle ratio. The car also has air conditioning and power steering – making it ideal for regular year-round use.

As a later model the car features that famous elevated hood that had been developed to allow the installation of the larger V8s. The car also has the original pop-up headlights and alloy wheels, it’s finished in white with a tan leather interior.

When it was new the car was delivered to Germany where it’s believed to have remained ever since. If you’d like to read more about it or register to bid you can click here to visit the listing on RM Sotheby’s. 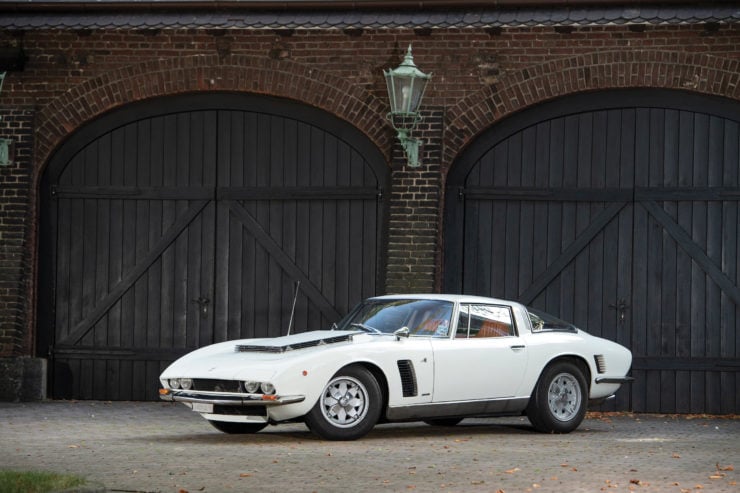 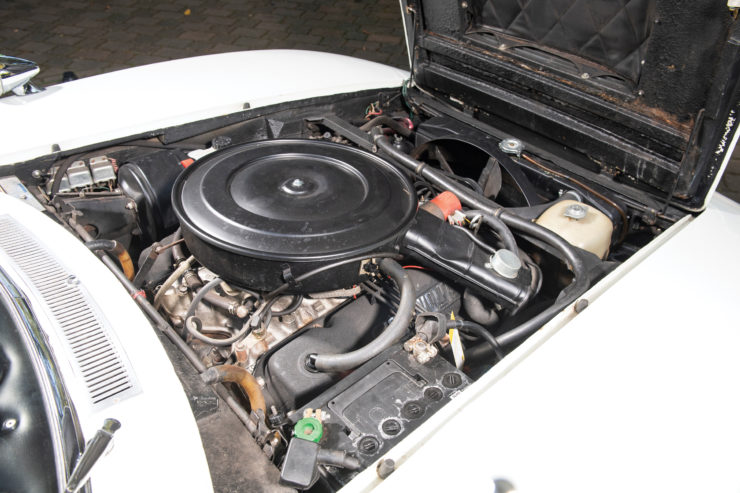 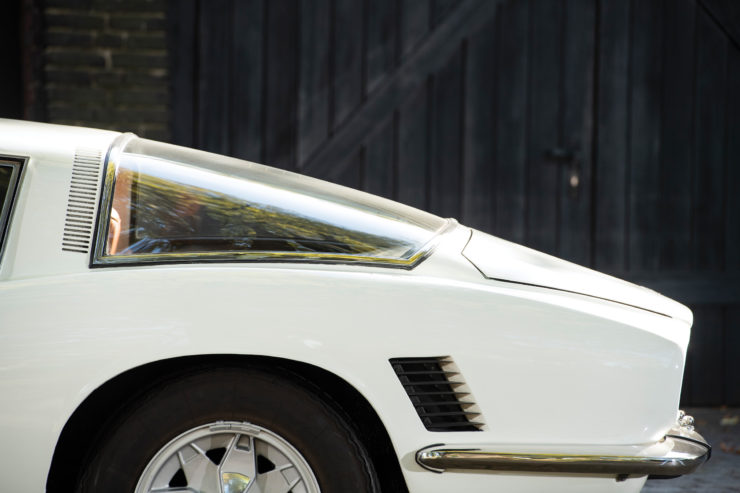 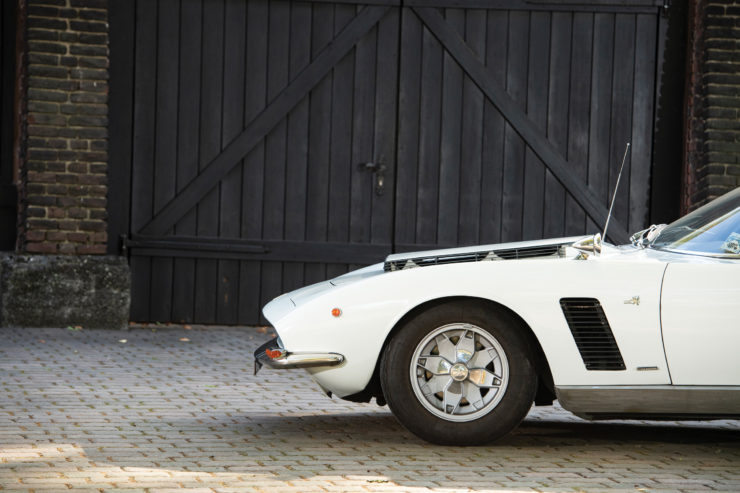 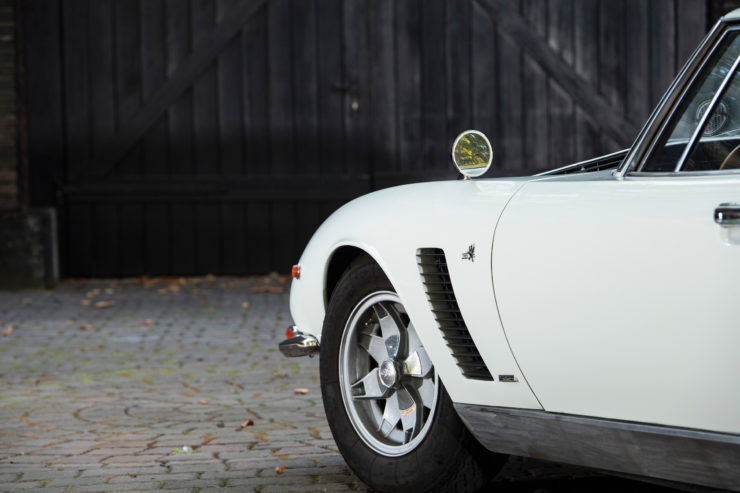 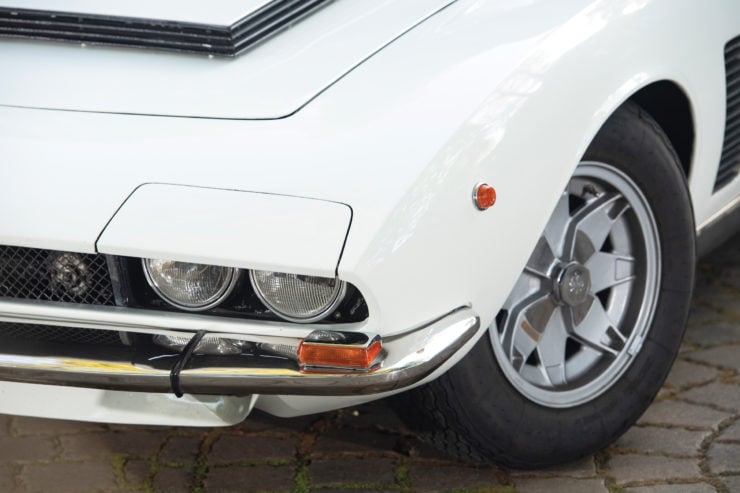 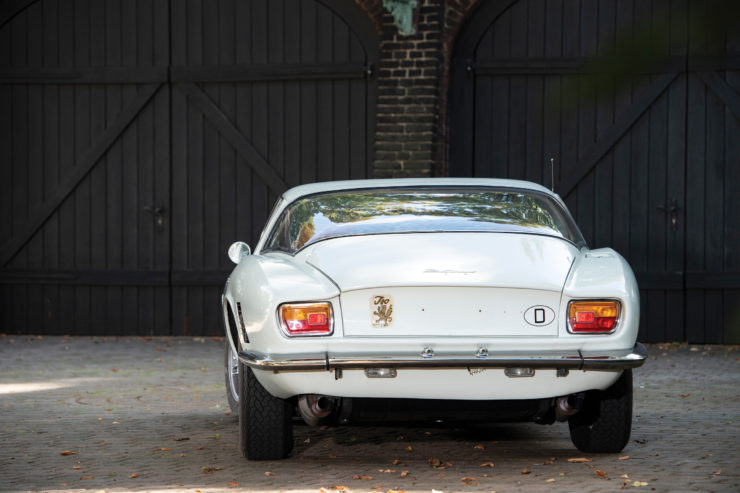 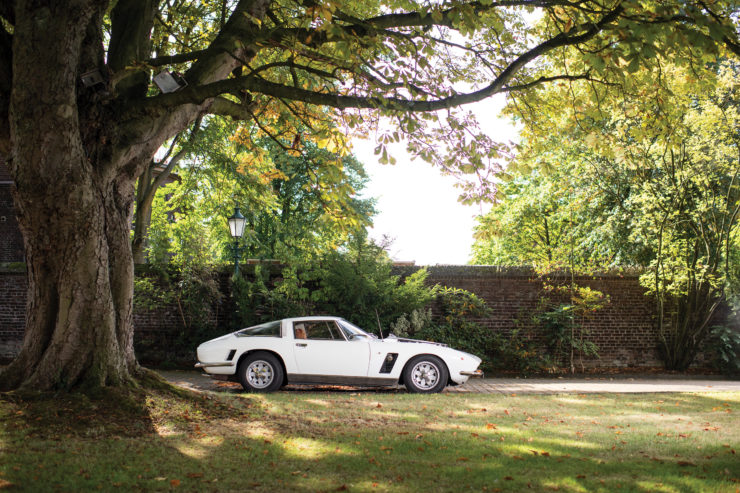 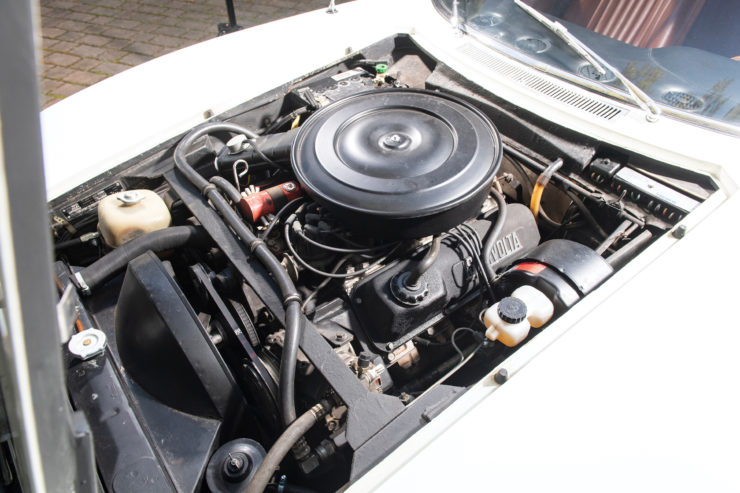 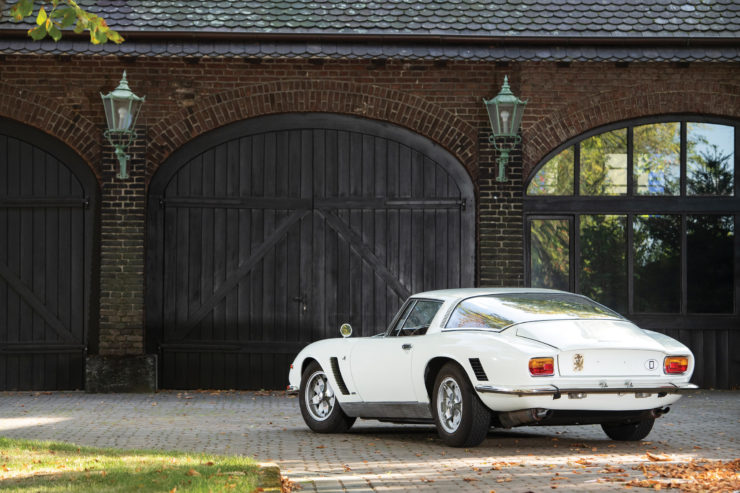 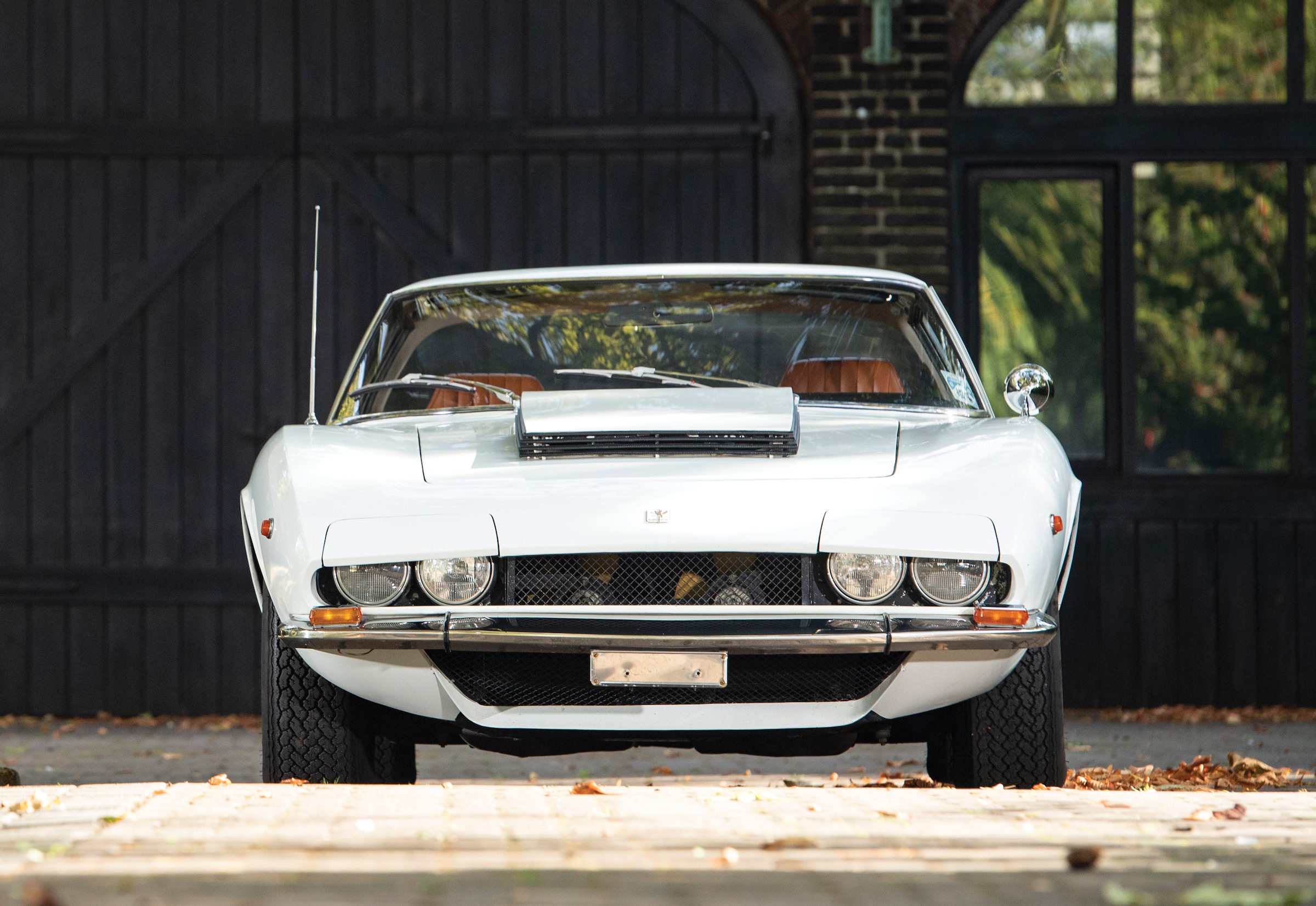