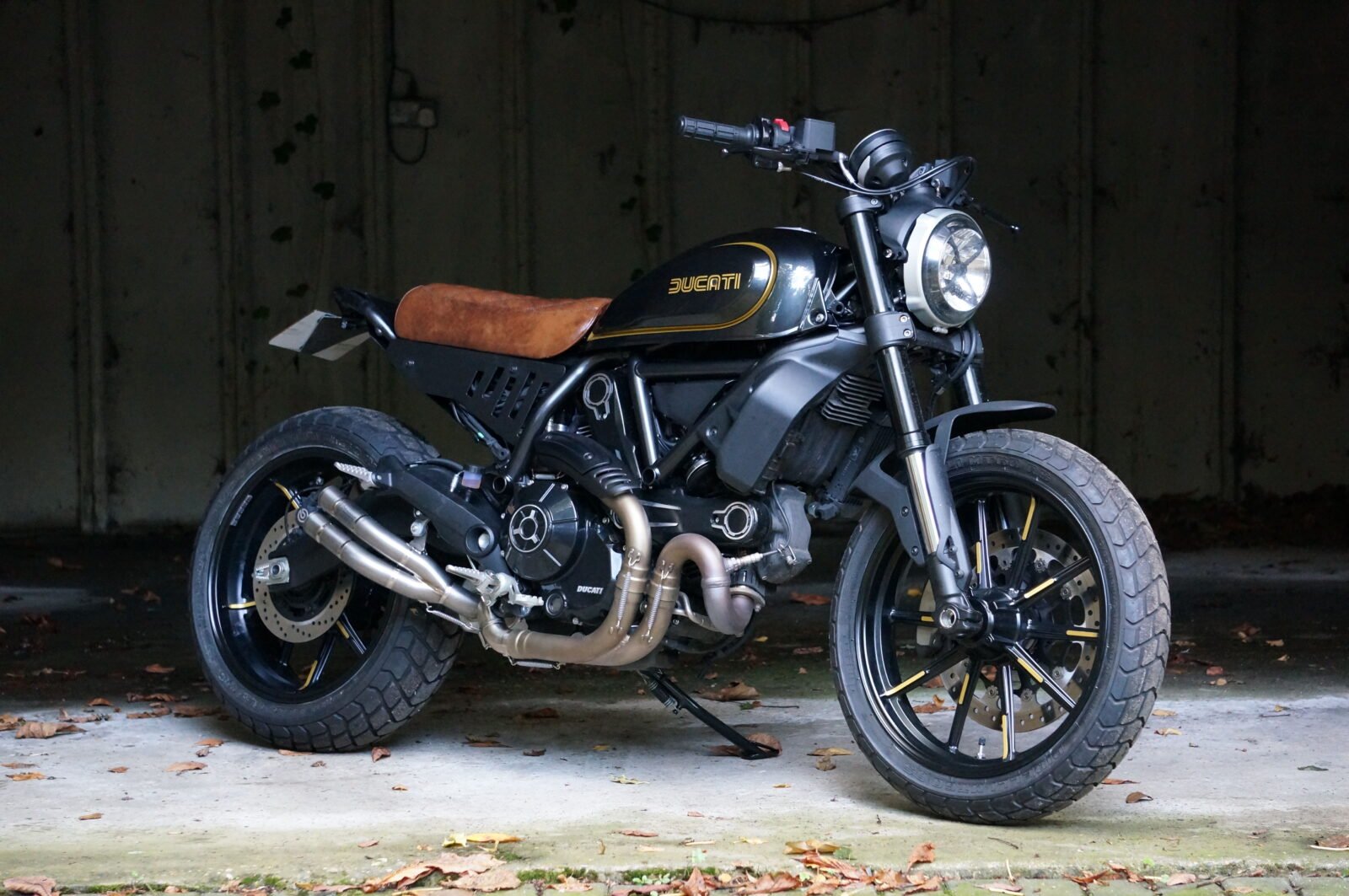 The new generation of Ducati Scramblers was introduced in 2015 to near universal acclaim. Ducati developed the model as a modern version of their much loved scramblers from the 1960s and ’70s, with familiar styling and a similar purpose.

When it comes to modern scramblers we typically think of the 865cc Triumph Scrambler, a model based on the Bonneville with some small accommodations made for light off-road use. The Ducati Scrambler was clearly developed to appeal to this same market, but the Italians went all-out and developed a road-biased dual sport motorcycle with better off-road chops than the British model.

Triumph have since responded with a far more aggressive 1200cc Scrambler, but in the meantime Ducati have sold well over 55,000 Scramblers of their own. There are a number of Scrambler model iterations in the Ducati line, the Scrambler Icon is the one best suited for urban use and the Scrambler Desert Sled is the one best suited to going off-roading with friends who are on bikes like the BMW F 800 GS and the Triumph Tiger 800.

As you might expect, the Ducati Scrambler has been a popular target with custom motorcycle builders around the world. We’ve seen all manner of unusual Italian Scramblers, from the weird and wonderful to more practically updated builds that are designed to be used on a daily basis in real world traffic. 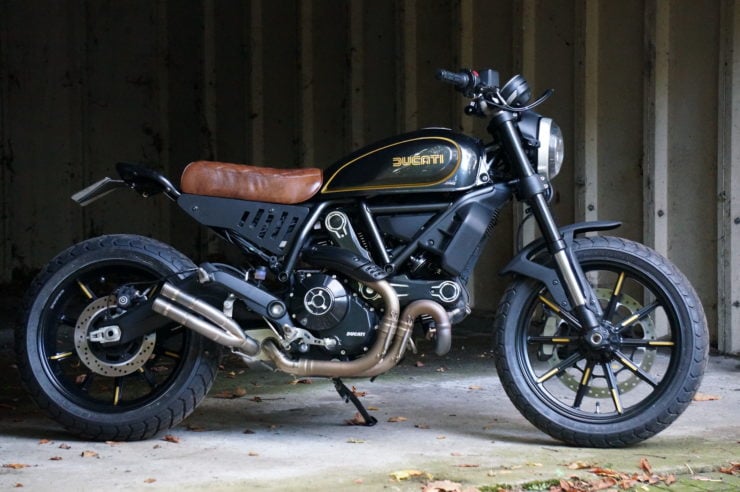 The bike you see here is one of the latter types, and it can now be seen daily on the streets of London.

We’re going to turn it over to Adam from Untitled Motorcycles to tell the story of this clean, minimalist custom in his own words.

The owner of the Ducati came into UMC to talk about getting some paint work done on his motorcycle. After he spent the afternoon looking at our bikes and chatting about his bike he decided to take his bike that bit further into the custom world. He mentioned that he never takes pillions so a small seat would be a good idea. Louder lighter silencers was also something he had thought about. Adam doesn’t like the back end of the Ducati when you take the seat of so a small area to have a bag attached was mentioned in the conversation and smaller rear lights and indicators.

One thing that I wanted to do was keep the frame as it was, I didn’t want to chop anything off it or weld anything to it for the sake of simplicity. This makes customising a bike very interesting as you have to use the mounting points that the manufacturer provide and they aren’t always in the best location. That said, I do love the challenge that this presented, and so a budget was set and the bike brought in so work could begin.

The first order of business was removing most of the plastic, the tank and wheels were then sent to Image Custom Design to be painted. The plastic seat pan was carefully modified and sent to Glenn Moger to work is leather magic, and give it fresh upholstery. 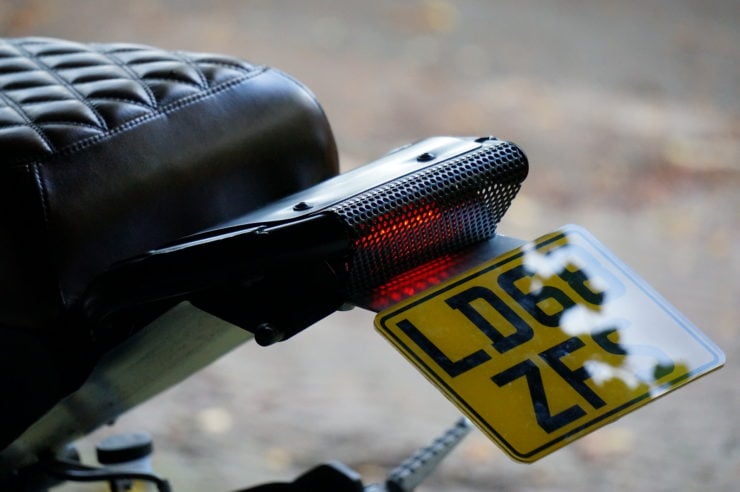 A small rear light was ordered from Alchemy Parts was fitted along with Motogadget indicators front and back, this cleaned up the look of the bike significantly. The heavy original silencer was removed and a new Mivv double gun unit ordered (never order an Italian part just before August, delivery times stretch out like Narnian time dilation).

Alloy side panels were fabricated in-house and slots fitted. Usually I like to fill the slots with a mesh of some sort however on this build I went with truth to materials allowing the internals to be on display. It is a Ducati engine after all.

A small registration plate made up to stop the rain as there’s no mudguard now on the bike. Lower, narrower handlebars were also fitted as the original ones are wide and high not great for filtering in London traffic. I love how the bike rides now, it’s a clean, simple looking custom that has the perfect balance of style and genuine daily usability. 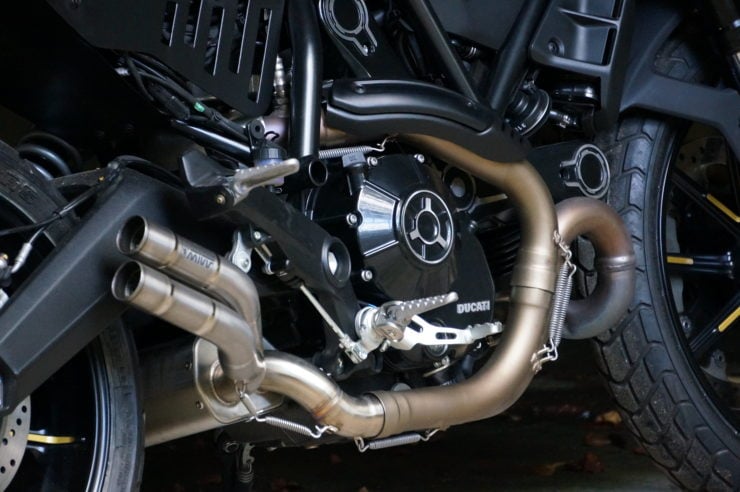 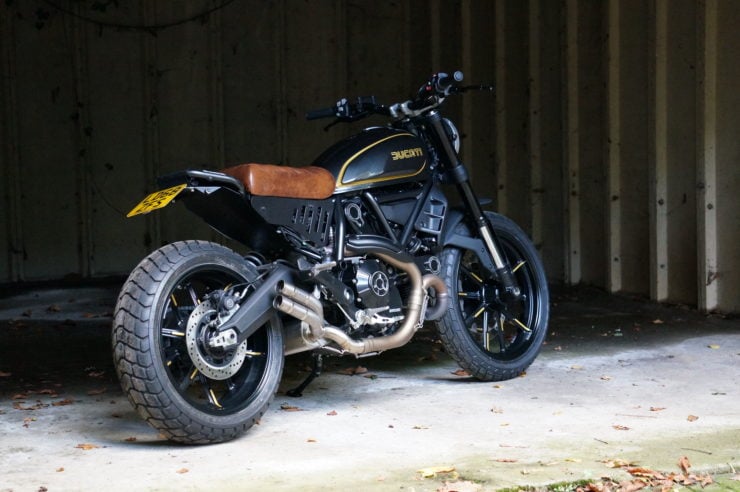 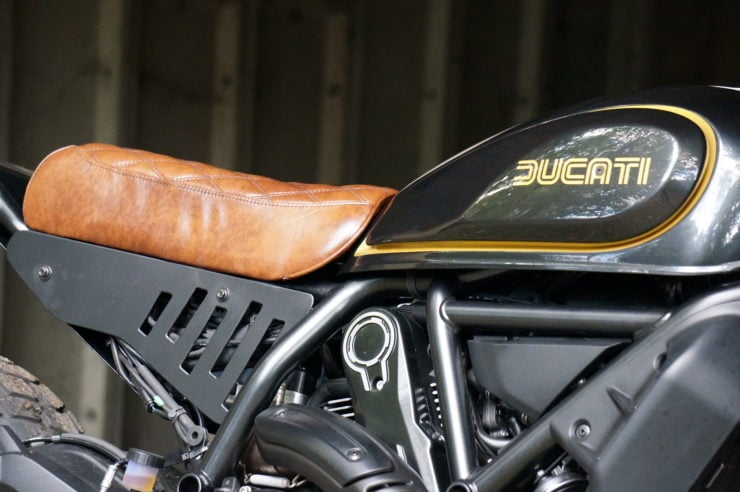 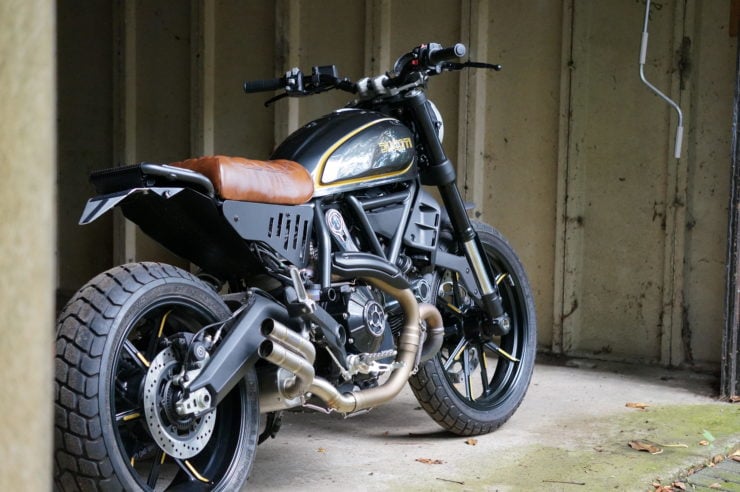 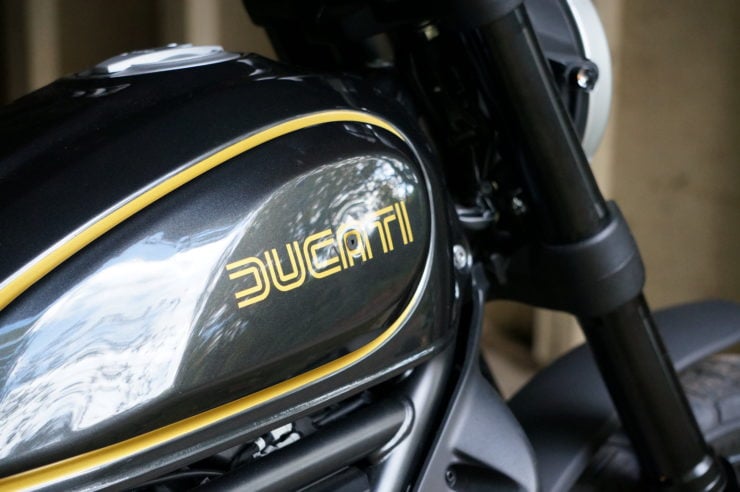 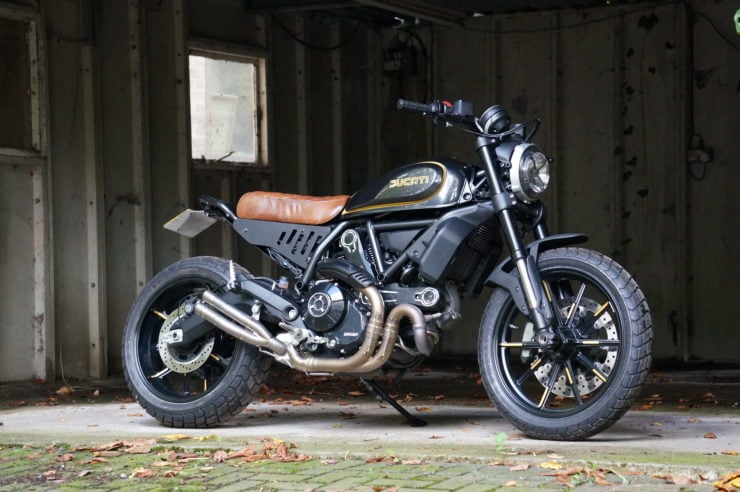 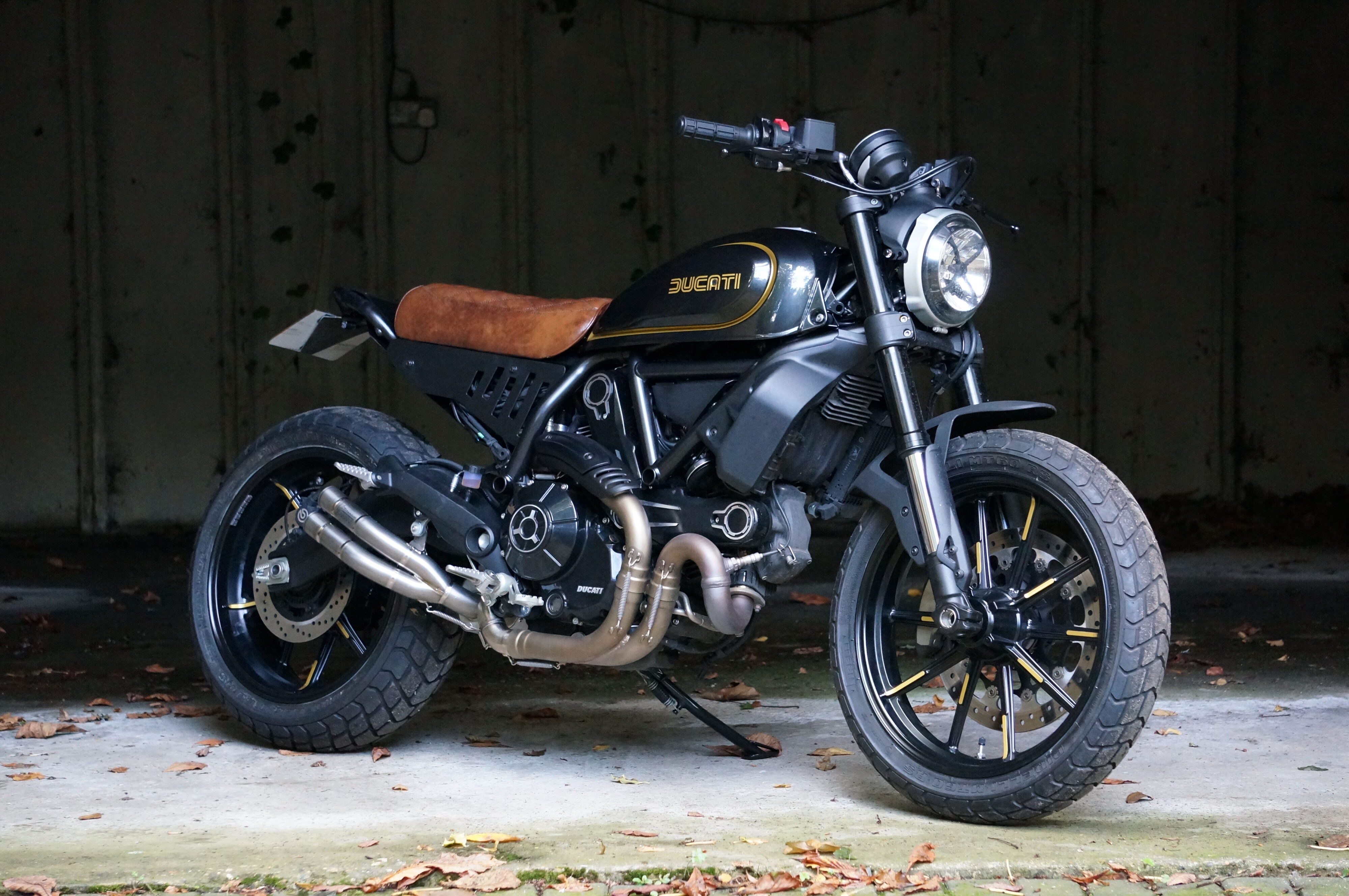