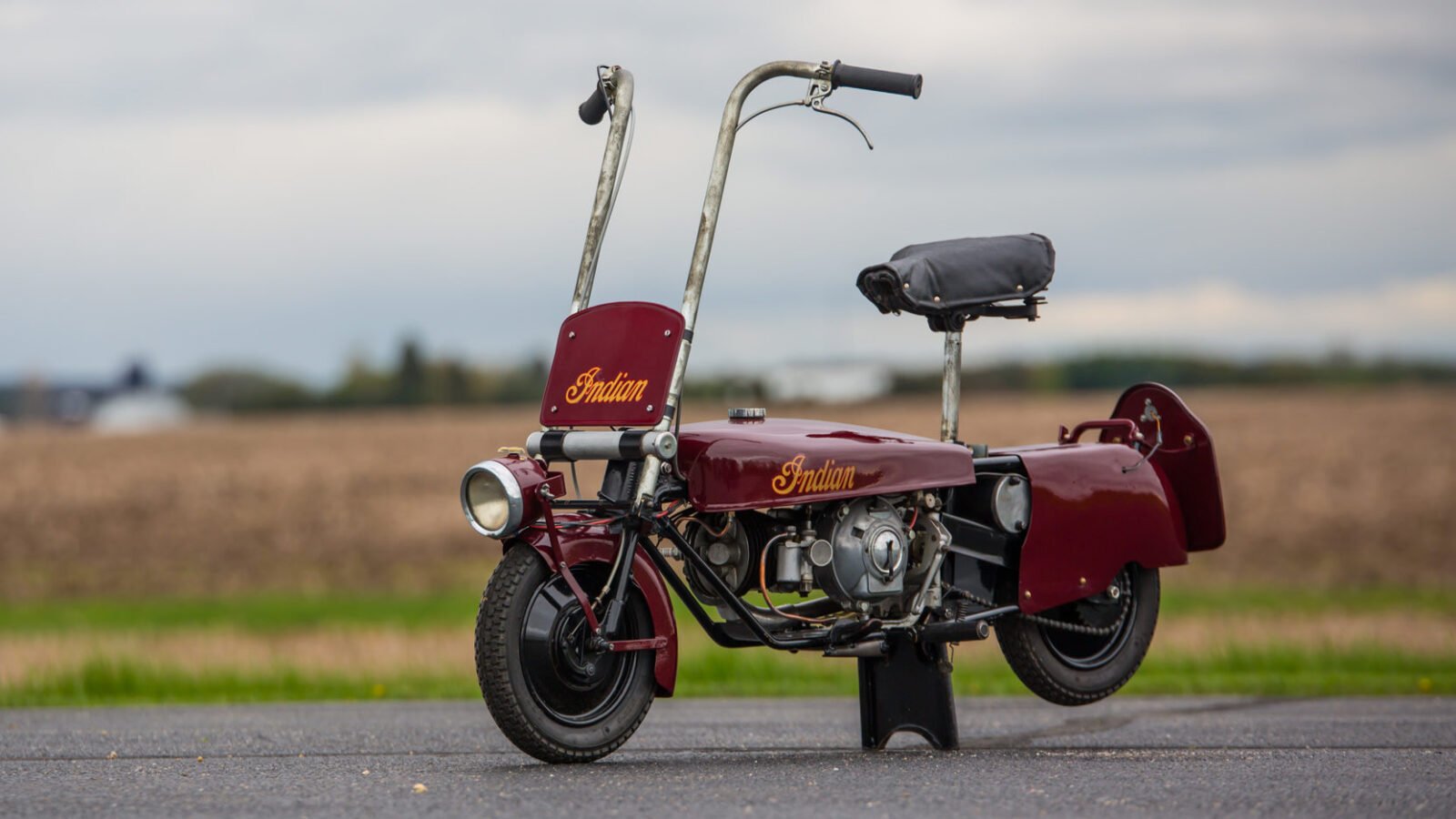 The Indian Papoose is a small folding motorcycle based on the Welbike, which had been developed during WWII for use by commandos who were parachuting behind enemy lines and needed a way to quickly get around.

The original Welbike was designed at Station IX, or the “Inter Services Research Bureau” in Welwyn, England. This was essentially an early equivalent to “Q Branch” from the James Bond novels penned by Ian Fleming.

The folding motorcycle had to be simple to build, easy to assemble and ride, and most importantly it had to fit inside a CLE Canister (Central Landing Establishment) so it could be parachute dropped from aircraft accompanying soldiers who were being deployed.

The Welbike and the Corgi

Each Welbike was powered by a 2-stroke Villiers 98cc single-cylinder engine that had been upgraded over its original configuration to provide more power for the weight of a fully equipped solider.

It could be removed from the CLE Canister and on the road in just 11 seconds – in fact the biggest challenge for troops was often finding the CLE Canisters which typically landed away from them due to weight and parachute differences. 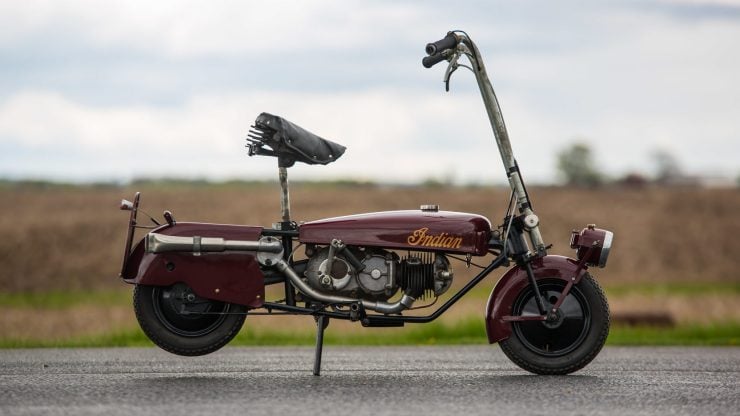 Approximately 3,940 Welbikes were made during the war, though only a fraction were used in combat. After the war they found use as civilian transportation, oftentimes on farms, and a team got to work developing a road legal version called the Corgi.

The original inventor of the Welbike was Lt. Colonel John Dolphin and he would be the man that established Corgi Motorcycle Co Ltd. and took on the role of Managing Director.

The Corgi was designed to be more practical than its military forebear, it had a larger top mounted fuel tank, front and rear fenders, front and rear brakes, and an Excelsior Spryt Autocycle engine.

Over the course of its production run the Corgi would be shipped around the world, with over 27,000 being built in total. The clever design would be emulated many years later by a number of manufacturers, including Honda with their Motocompo. 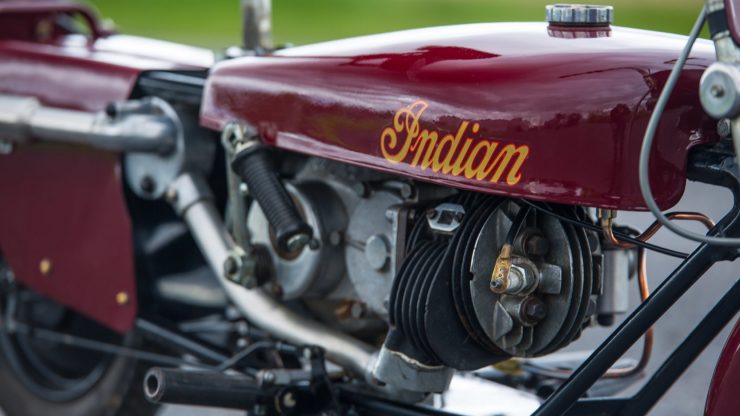 Many of the Corgis (and the Welbikes before them) had been shipped to the USA, where a huge market existed for inexpensive transportation.

Rather than selling the Corgi using its original British name (likely a hat tip to the favoured dog breed of the Royal Family), the model was badge engineered and sold as the Indian Papoose.

These Indians were all painted in a familiar shade of deep red, with an Indian logo on each side of the low slung fuel tank. A small headlight was installed up front and a brake light at the rear – to ensure the bike would be road legal. Though its top speed of approximately 30 mph did limit distances that could be realistically travelled.

Many of the original examples of the Corgi and Papoose were scrapped after their useful life had come to an end, so surviving examples are in demand by collectors.

The beautiful example you see here has been restored to concours level and it’s now listed as possibly being one of the best examples in the country.

It’s due to be auctioned by Mecum in June at the Las Vegas Auction, if you’d like to read more about it or register to bid you can click here to visit the listing 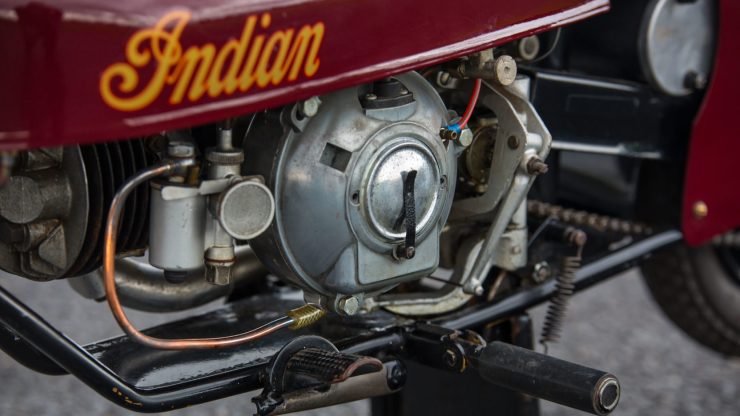 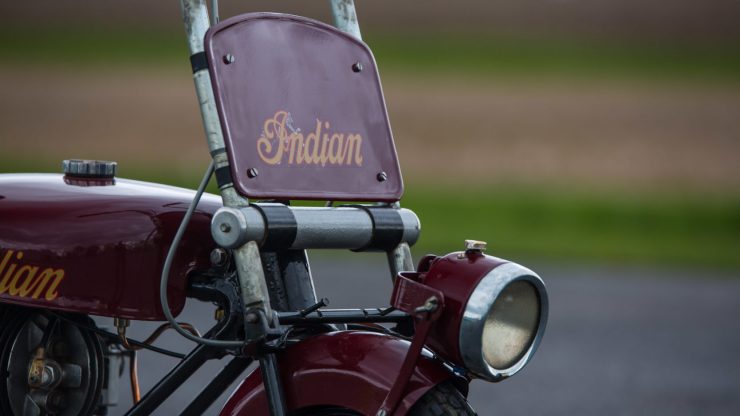 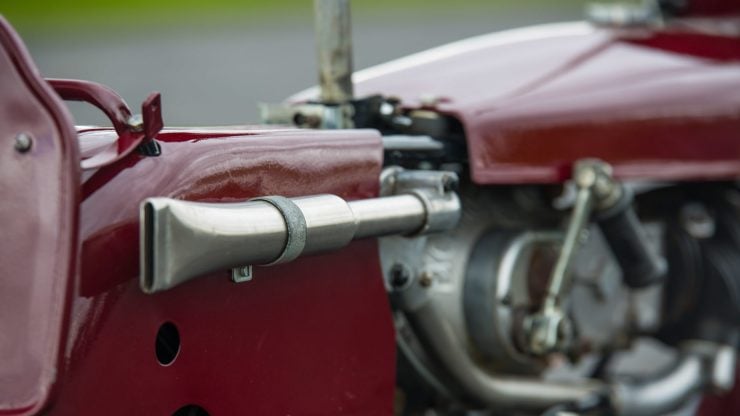 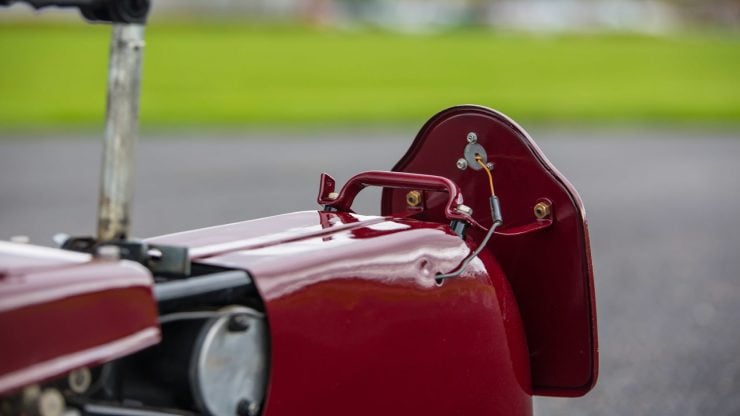 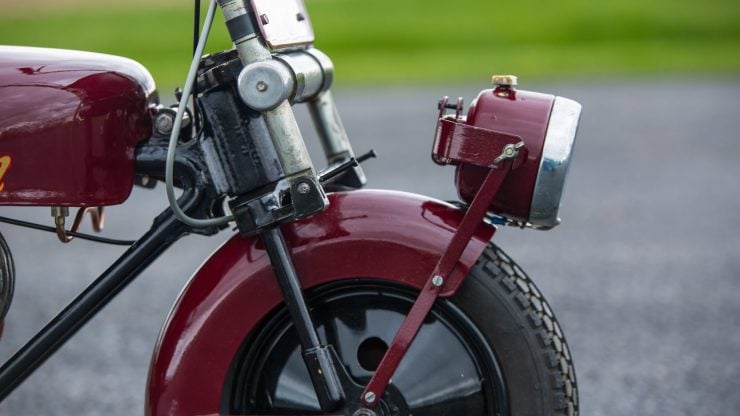 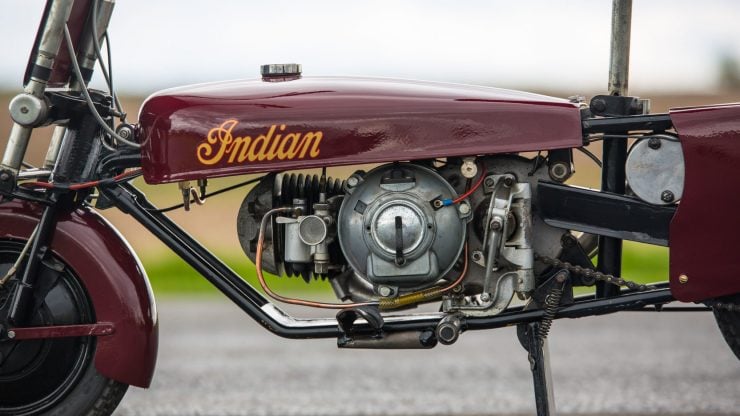 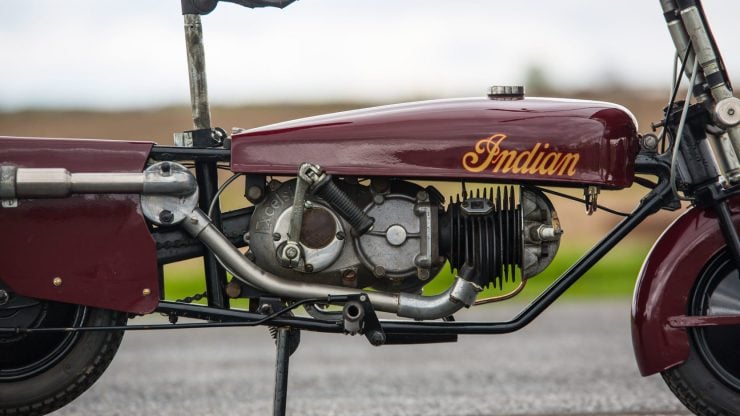 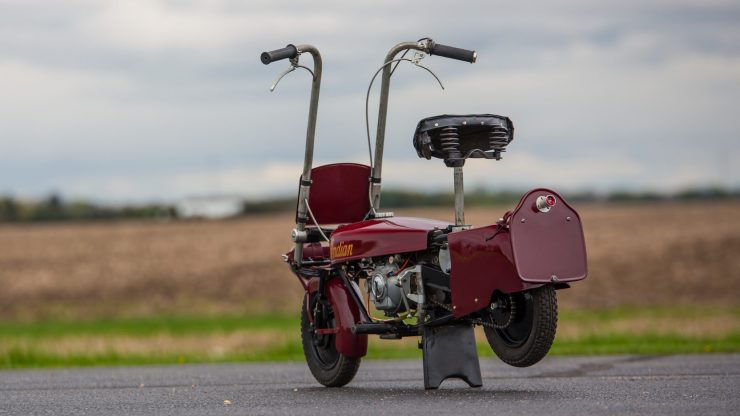 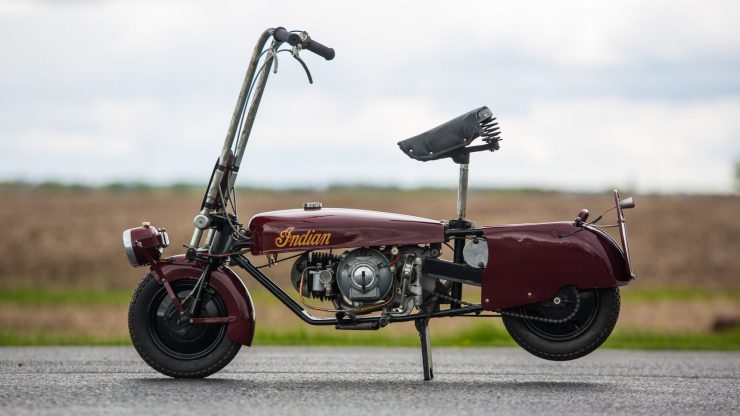 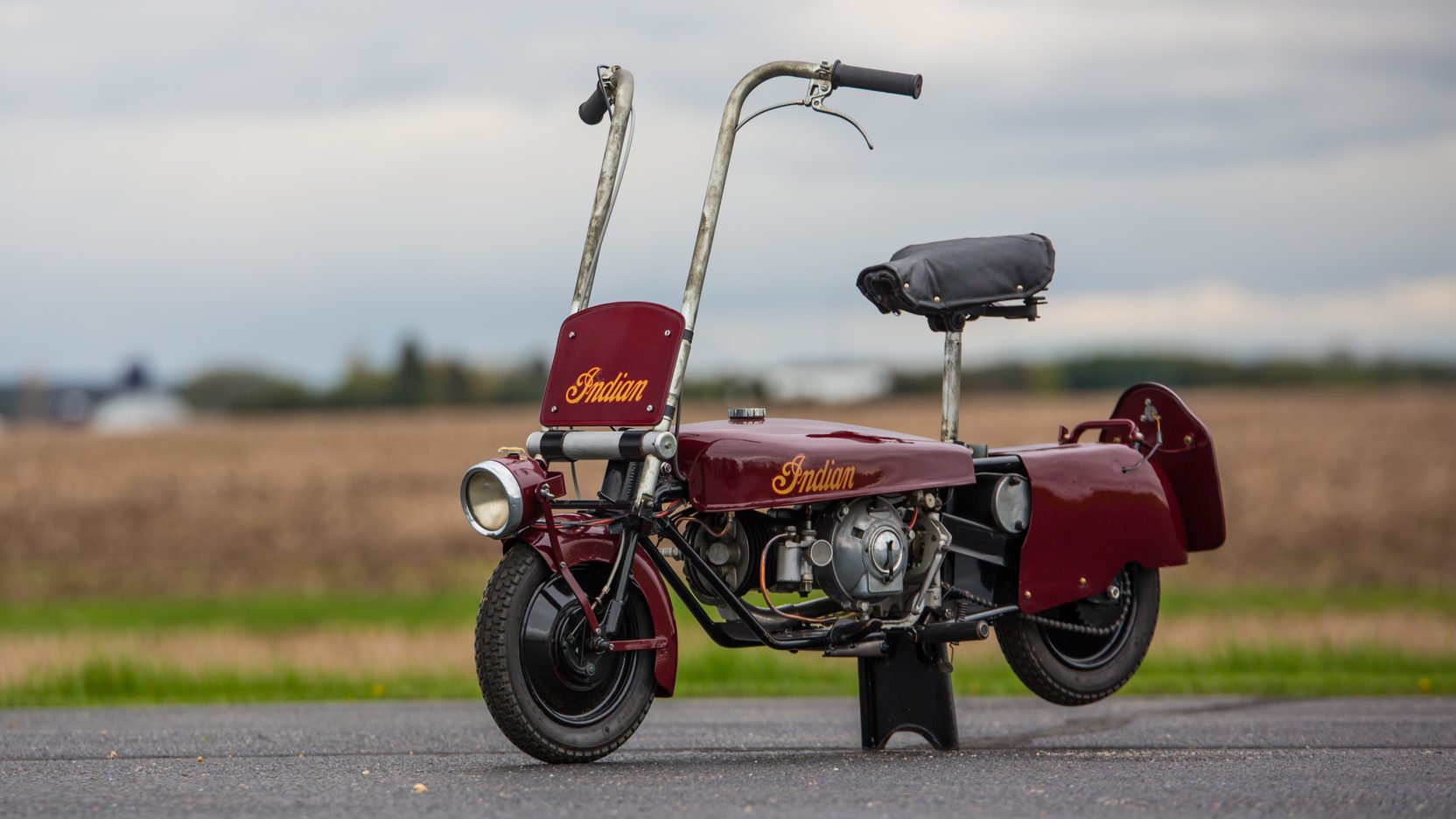