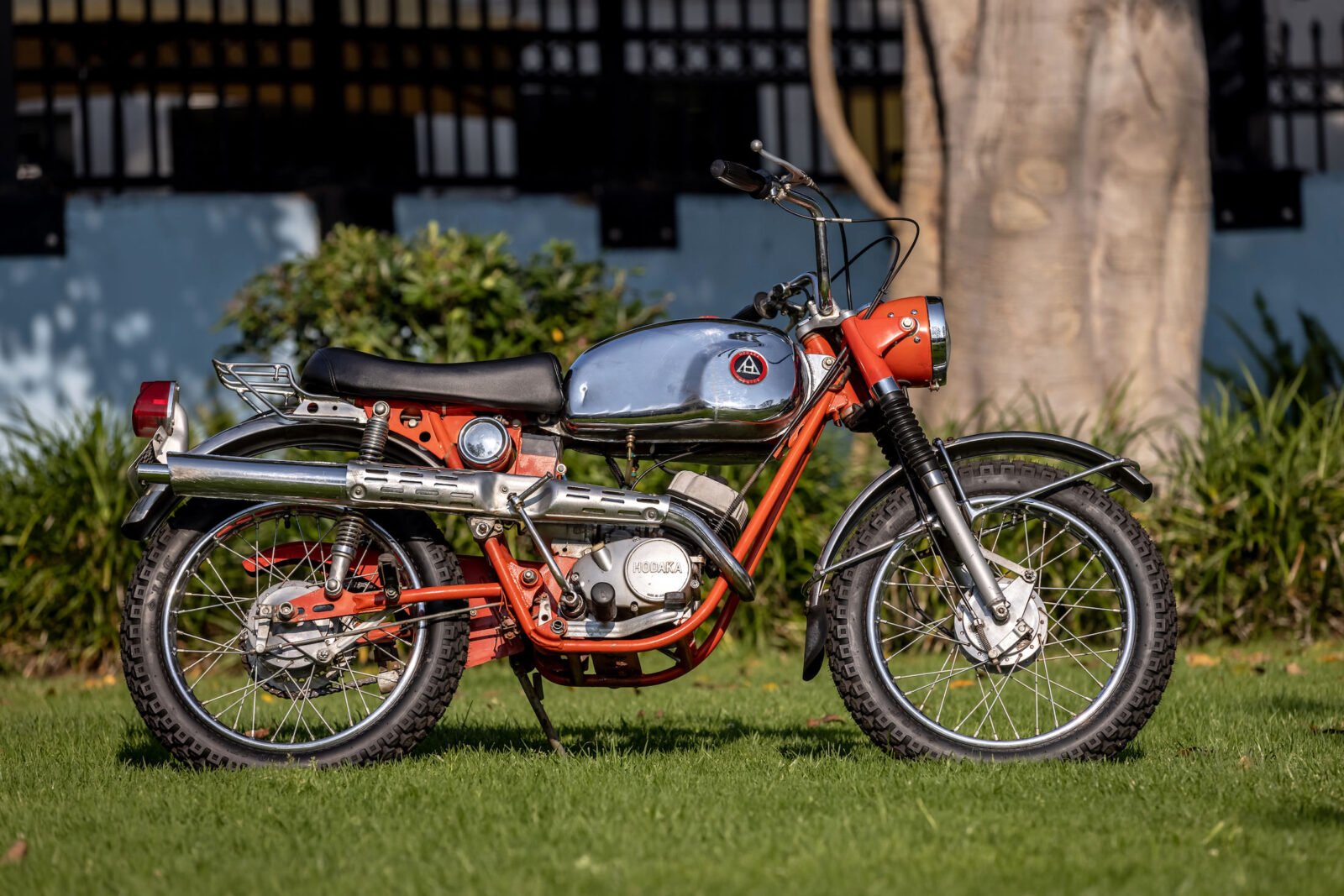 This is an original 1968 Hodaka Ace 100, an excellent example of the influential motorcycles made by the unusual American/Japanese company back in the 1960s and 1970s.

Taking the best of the British and Japanese designs and rolling in a hefty dose of American trail riding knowhow, the team at Hodaka helped to fundamentally change the way Americans viewed off-road motorcyles.

Hodaka: The Small Company That Changed Everything

Hodaka is best known today for two things – Their advanced off-road motorcycle designs that revolutionized the industry, and their unusual naming convention. They offered models with lighthearted model names like the Super Rat, Combat Wombat, Dirt Squirt, and the Road Toad. 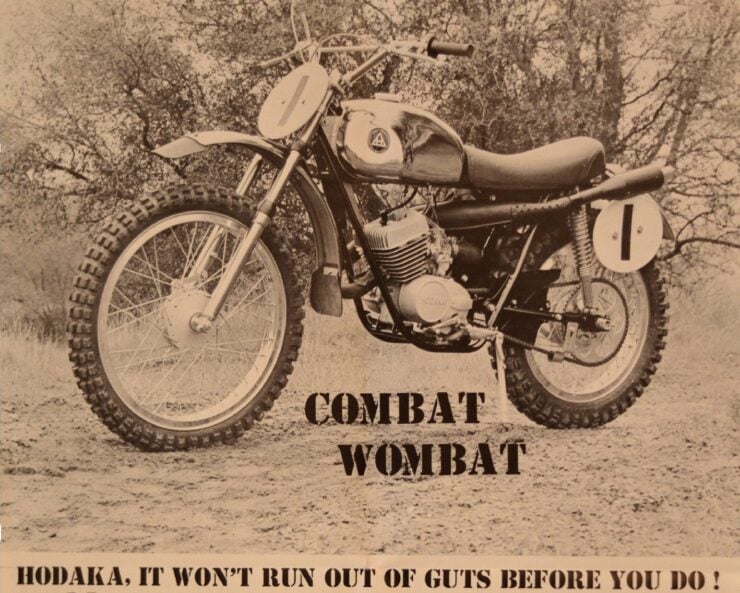 Hodaka became famous for their irreverent and oftentimes funny advertising and model names.

Hodaka had originally been contracted to make engines for the Yamaguchi Japanese motorcycle brand, smaller 50cc and 80cc engines with three-speed gearboxes. These Yamaguchi motorcycles were imported and sold in the USA by PABATCO however in 1963 Yamaguchi went out of business due to the difficulty of competing with the likes of Honda.

This left the folks at PABATCO with a dealer network and a strong local demand for motorcycles, but no motorcycles to sell, so they went to Japan and signed on Hodaka to make engines for them, then found the other companies to make the additional parts they needed. All of the motorcycles had their engines built by Hodaka as well as their final assembly.

As simple as this recipe was, it worked flawlessly for PABATCO and it put Hodaka on the map of every off-road riding enthusiast in the United States. The motorcycles were designed in Athena, Oregon and built in Japan before being shipped back to the United States to be distributed to dealers.

The first of these Hodaka motorcycles was the Hodaka Ace 90 which was followed by the Hodaka Ace 100. Some updates had been made to the original Yamaguchi engine design, it now had more capacity and a four-speed transmission.

The Hodaka motorcycle frames were said to have been strongly influenced by the small British motorcycle manufacturer Cotton, and each design was tested thoroughly by PABATCO’s enthusiastic employees in the Oregon wilderness. 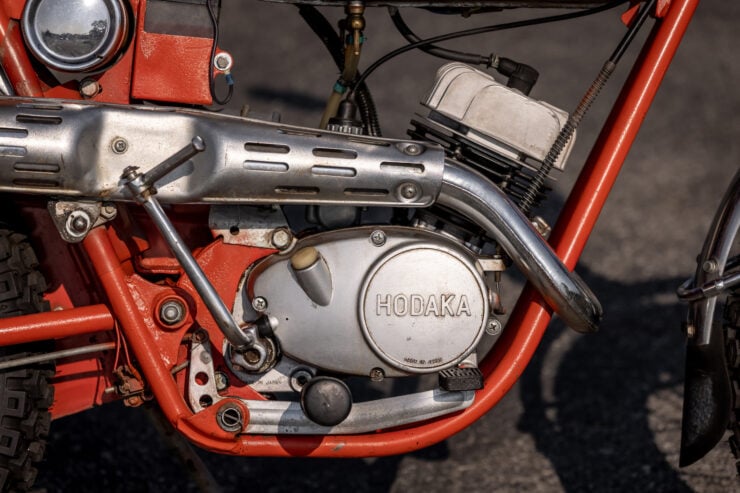 The engine in the Hodaka Ace 100 is a simple 98cc, single-cylinder unit with a four-speed gearbox and air-cooling.

Hodaka was able to adapt very quickly to changing trends in the off-road motorcycle world and because they designers were based in the United States, they had a direct line of communication with their riders.

In the 1960s riders piloted their Hodaka Aces to class wins in the 500 mile Greenhorn Enduro, the National Trail Bike Championship, and the Pike’s Peak Hillclimb. This made the company a household name for riders across the country, and Hodaka capitalized on it by releasing new and updated models with uprated suspension and larger, more powerful engines.

With their fun loving approach to motorcycles, their catchy model names, and the fun cartoon characters that accompanied each model, Hodaka was the king of the hill for a few years before the competition swept in with ever cheaper motorcycles.

Hodaka’s US operations would be shut down in 1978 however the Hodaka faithful remain a force to be reckoned with. 150,000+ motorcycles were built by the company over their 14 year production run and many are kept in running, riding condition by their owners. 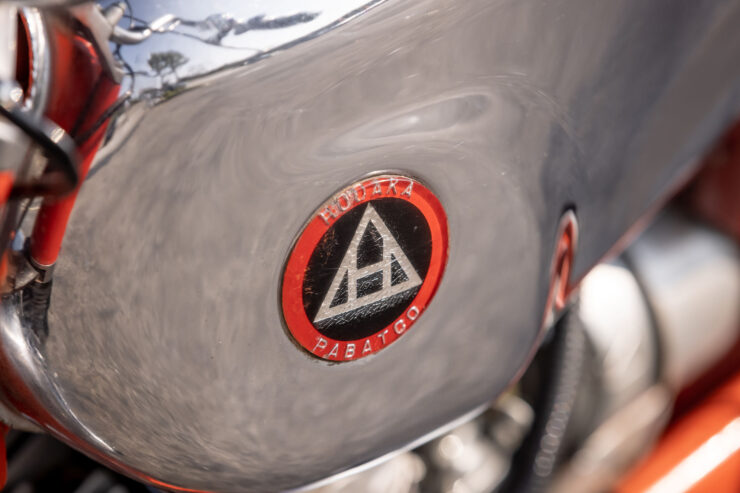 Today the brand lives on in the hands of a dedicated global base of enthusiasts.

There’s an annual Hodaka Days event in the United States where riders from all over can come together and share their love for the marque, and there are clubs across the country.

The model you see here is the Hodaka Ace, just the second motorcycle built by the company and it was capable of just under 10 hp at 7,500 rpm from its capacity of 98cc. As with all Hodakas it’s a two-stroke that relies on air-cooling, and it proved to be a reliable engine given adequate maintenance.

The next model after this one was the Super Rat and it borrowed heavily from the Ace 100, each successive design was built for slightly different purposes, some for motocross and some for enduro, others still for amateur riders to just go out and have some fun.

This Ace 100 presents in overall good condition for its age with all the correct original parts in place. If you’d like to read more about it or register to bid you can click here to visit the listing on RM Sotheby’s. 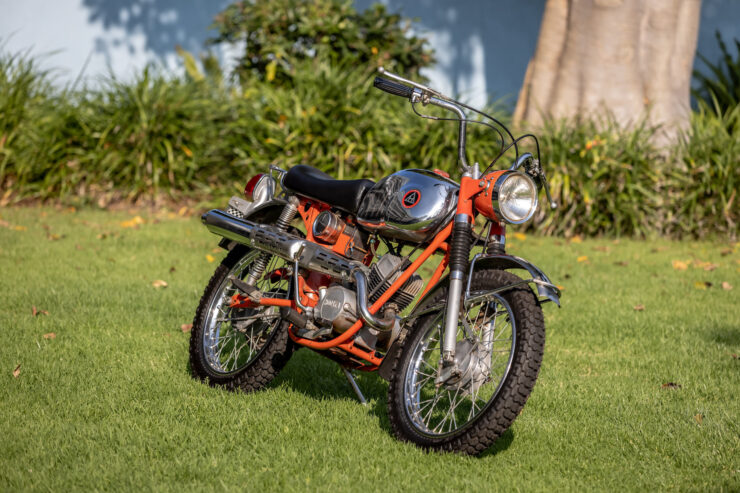 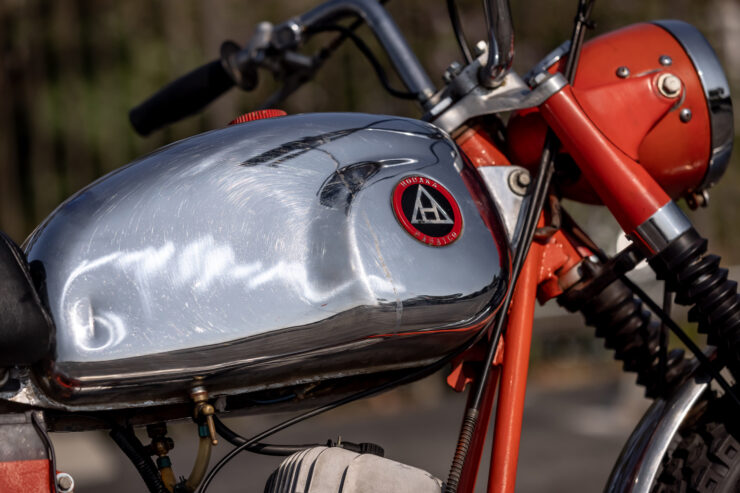 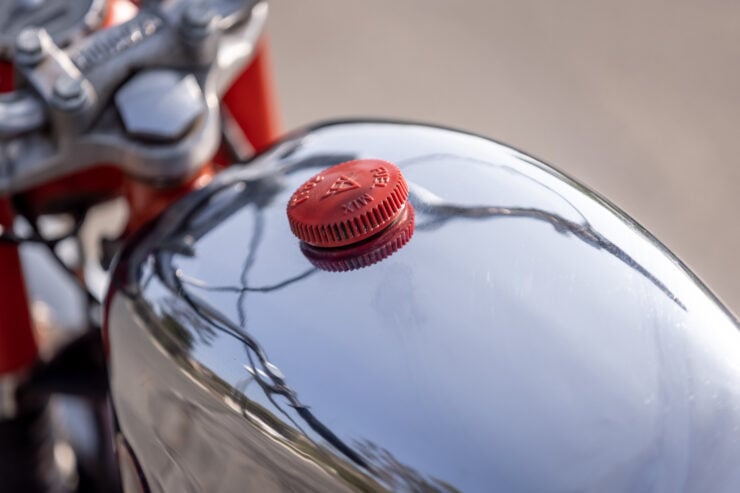 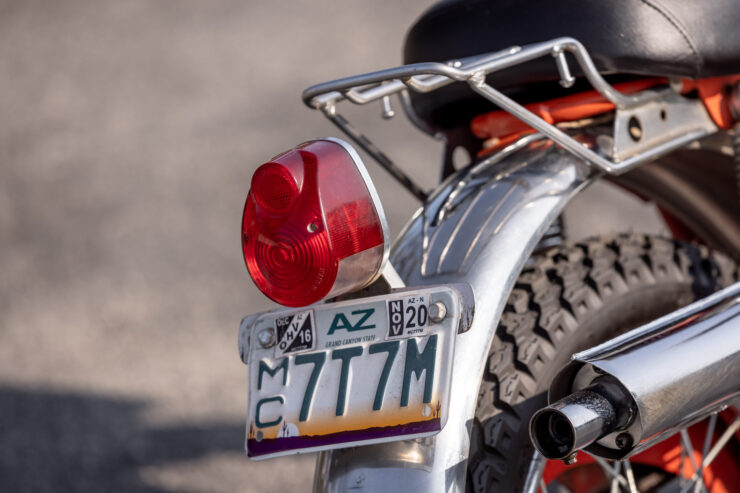 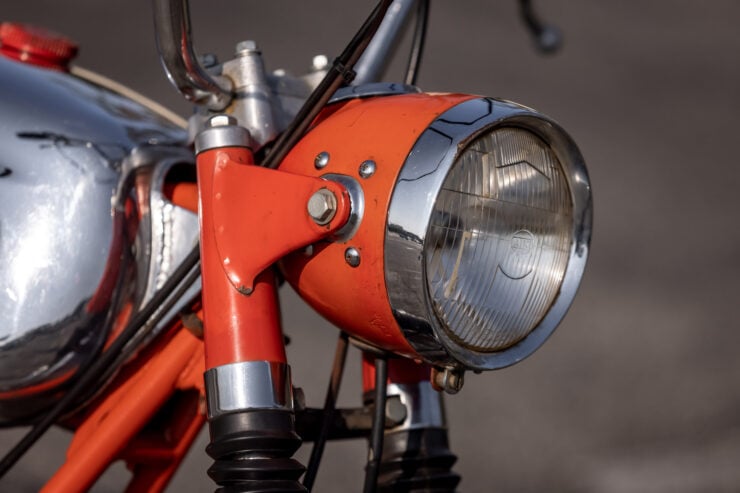 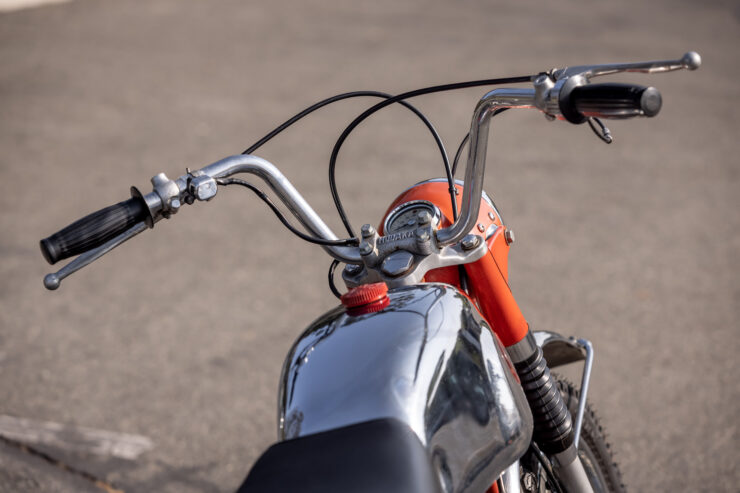 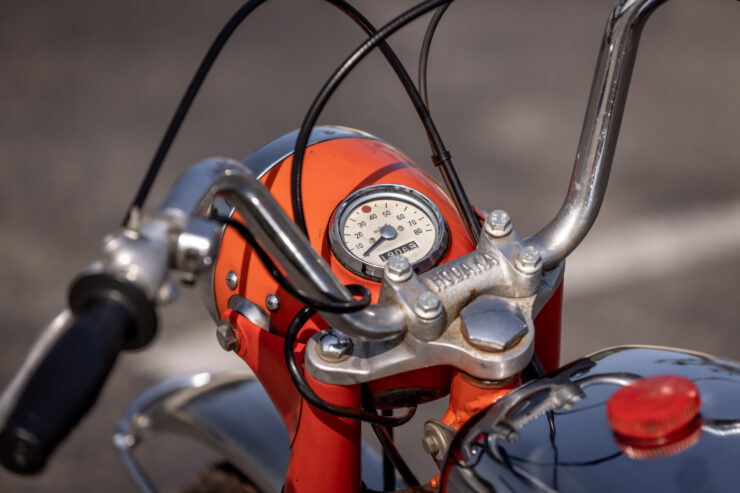 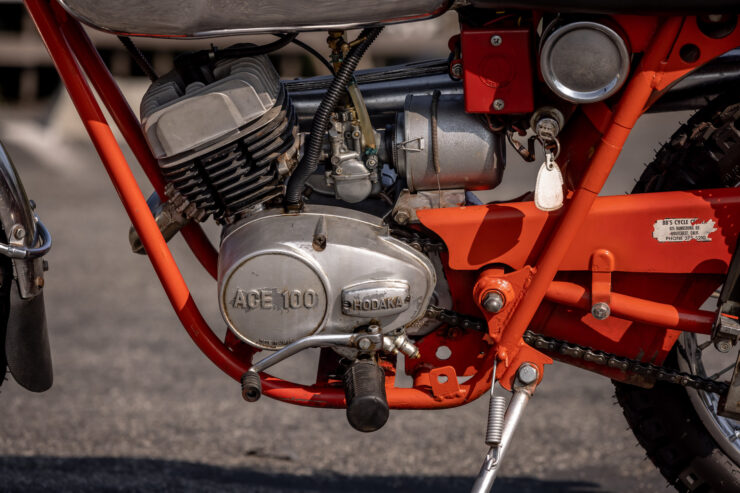 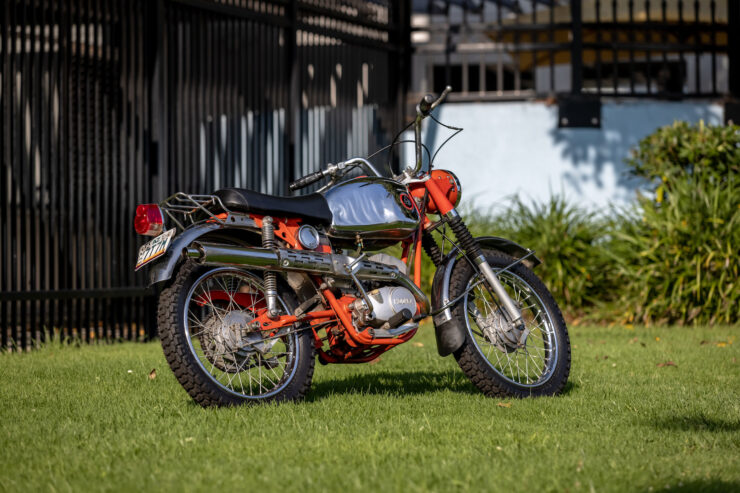 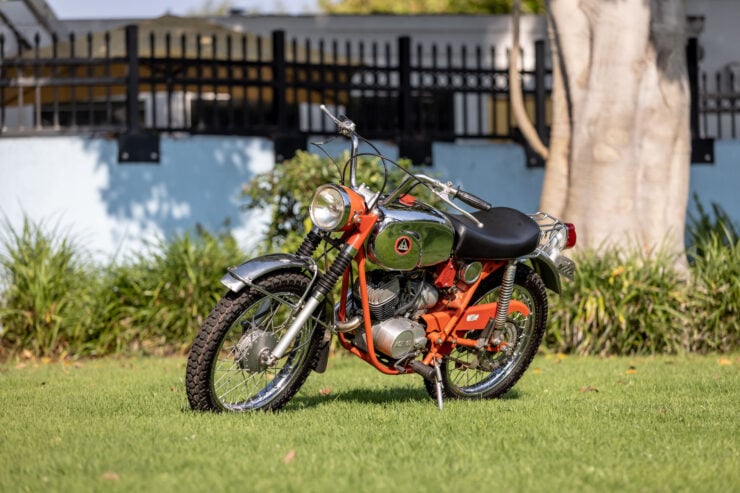