A Brief Guide To Honda Scramblers – UPDATED FOR 2019 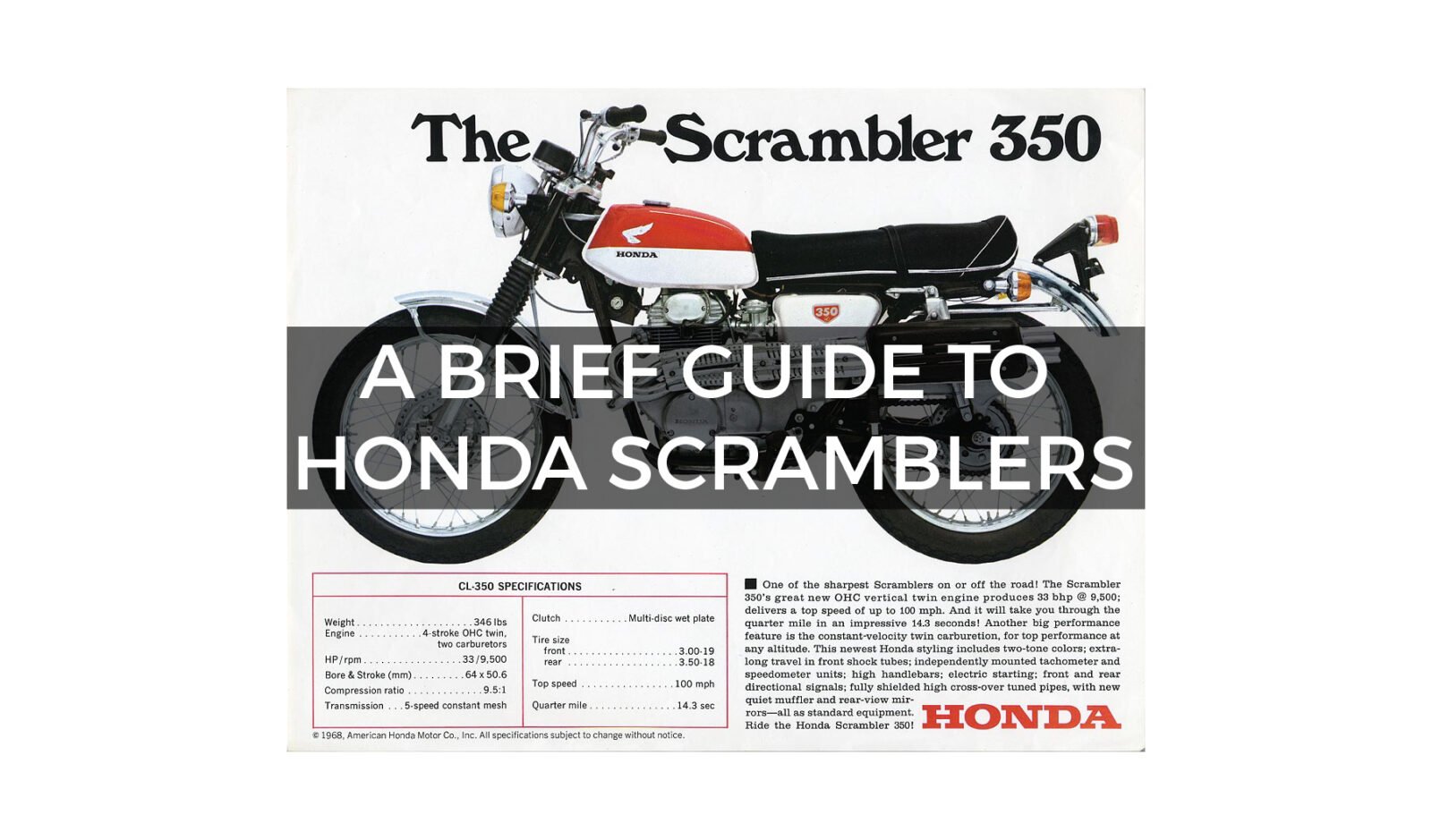 Note: This guide was updated in 2019 to include the new 2019 Honda Monkey, a minibike scrambler based on their original model from the 1960s.

Of all of the big four Japanese motorcycle manufacturers, it is perhaps Honda that is the most closely associated with the scrambler genre – they were building scramblers from the mid-to-late 1960s with much success in Japan, North America and Europe.

Honda used the “CL” model prefix to denote their scrambler series, engine sizes ranged from 50cc all the way up to 450cc, and typically the CL model was a scramblerized version of the parallel street model with a “CB” designation.

Some will tell you that the Honda CL series motorcycles aren’t “real” off roaders, but they were never really intended to be dirt bikes, enduros, or motocross bikes. They were intended as an early version of what we today call the “dual sport” – a motorcycle capable of being ridden comfortably on the road, and then taken up a trail or fire break on the weekend. It’s highly likely that most owners never ventured onto the dirt at all – in much the same way that many modern SUV buyers never take their 4x4s off road.

That said, there’s a lot of fun to be had taking a CL out into the wilderness for a few days. They’re lightweight bikes that do a great job of tackling varied terrain, just don’t go taking them off any jumps.

We’re seeing many collectors and vintage motorcycle fans taking an avid interest in the CL series Hondas in recent years. The models have an appealing retro charm combined with the reliability that Honda has become famous for – and their lack of plastic parts, electronic rider aids, or complex onboard computers mean that even the most questionable shadetree amateur mechanics can work on them.

Below you’ll find all the major models in the Honda CL series with a brief synopsis of each. 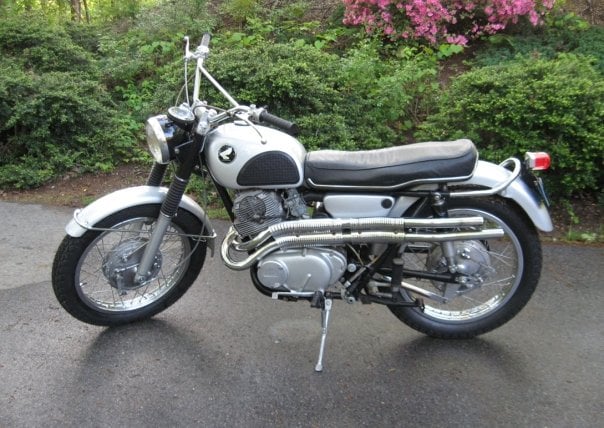 The CL77 was amongst the first of the scramblers offered by Honda, despite the name it was actually fitted with a 305cc engine with an overhead cam and a red line of 9000 rpm. Today the CL77 is one of the most collectible of the CL models. 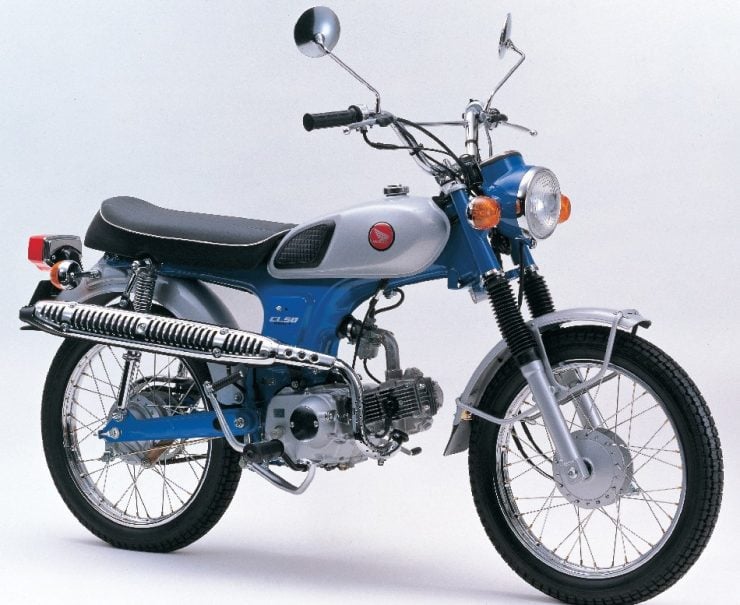 This was the smallest in the CL series with the same pressed-steel backbone frame as its sibling – the CB50. The model was fitted with braced handlebars, a higher rear fender (for additional suspension travel), and the characteristic high exhaust seen across the CL range. 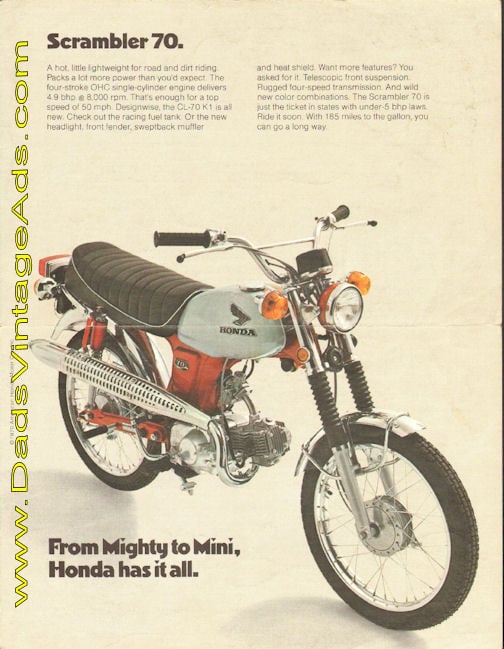 The Honda CL70 was basically a CL50 with a slightly larger engine capacity – of 70cc. The handlebars, exhaust and fender are shared and the two models look very similar even from quite close up. 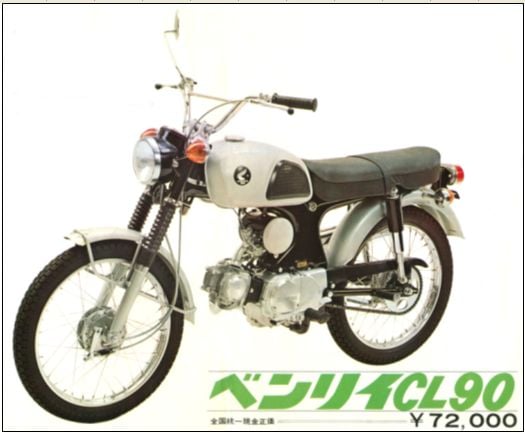 The Honda CL90 is one of the rarer variants, it used many of the common platform parts from the CL50 and the CL70, but it seems the model never enjoyed the same production volumes. 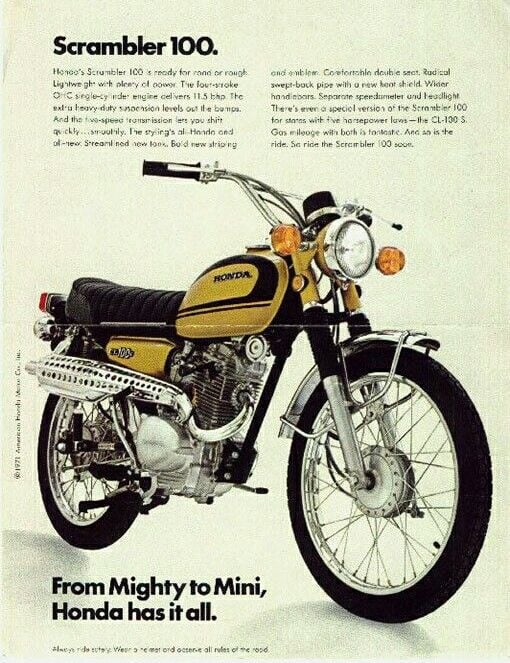 The CL100 was the first of the real motorcycles in the CL range; it was fitted with a 5 speed transmission and a full electrical system – along with the high-exit exhaust and other scrambler features. 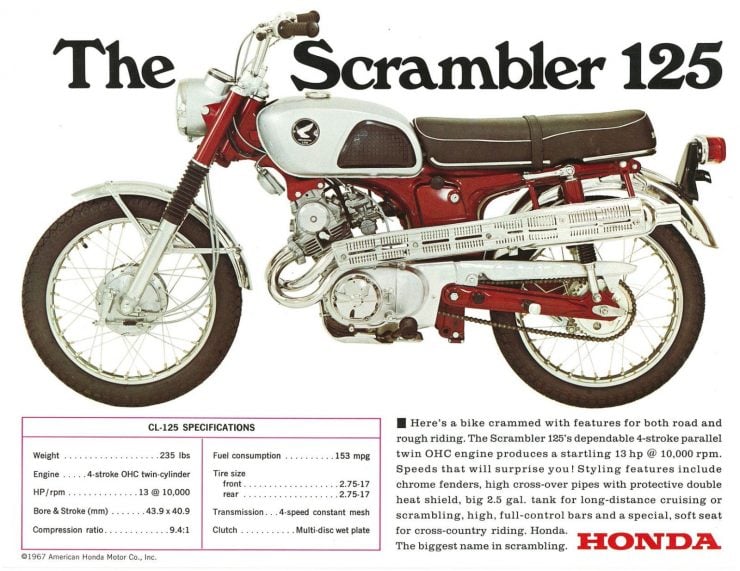 The CL125 was only sold for 2 years between 1967 and 1969, it’s very similar to the CL100 in almost all respects; however it has a larger capacity and a little more power as a result. 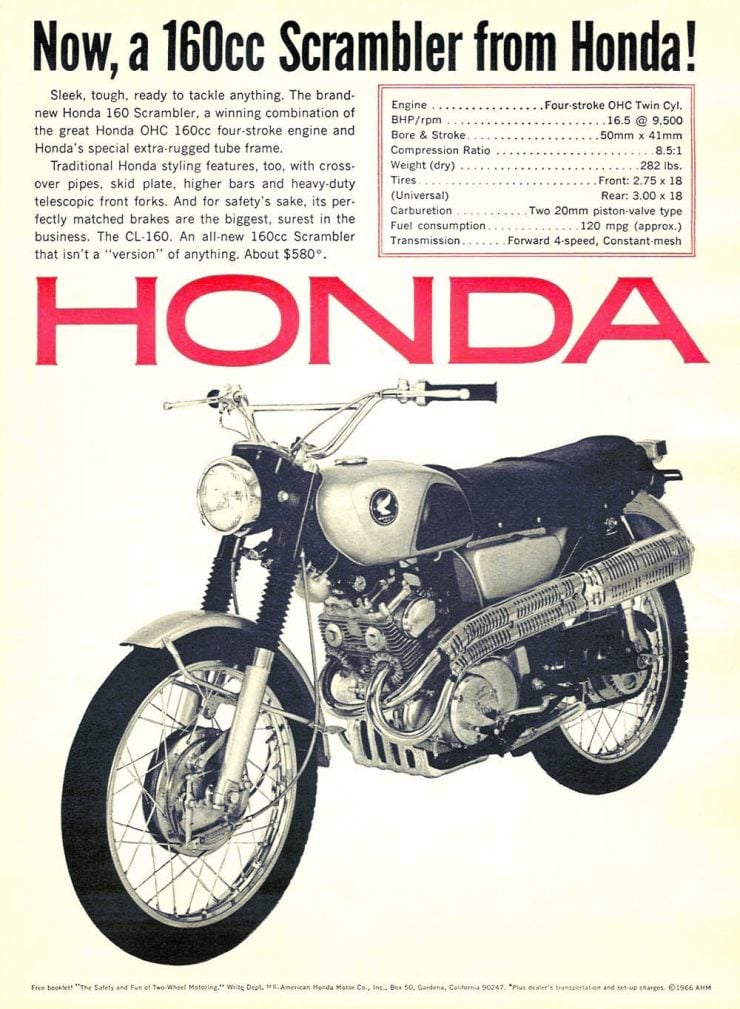 This is one of the rarer CL models, it was produced between 1966 and 1967 and there’s no clear record of exactly how many were made. Finding good examples can be hard work, and their values are climbing. 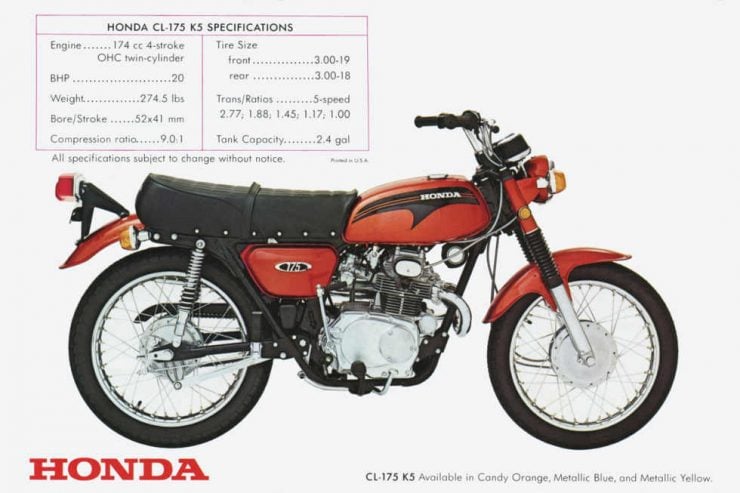 The CL175 followed on from the CL160, production started in 1968 and continued until 1973, meaning this is one of the more common CL models you’ll find. Parts are easy to come by and thanks to the additional power you can realistically carry two people. 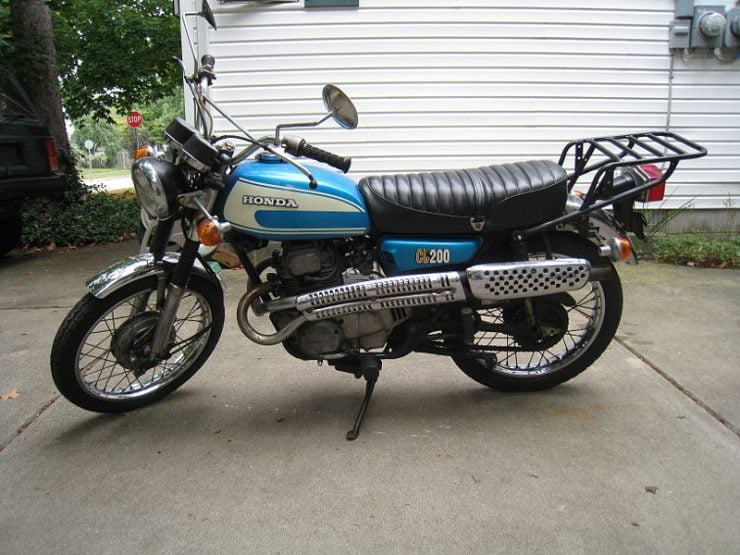 This is another very rare model variation, the CL200 was only sold in 1974 and we don’t have solid numbers for how many were made. In many respects this model was a half way point between the larger CLs and the smaller. 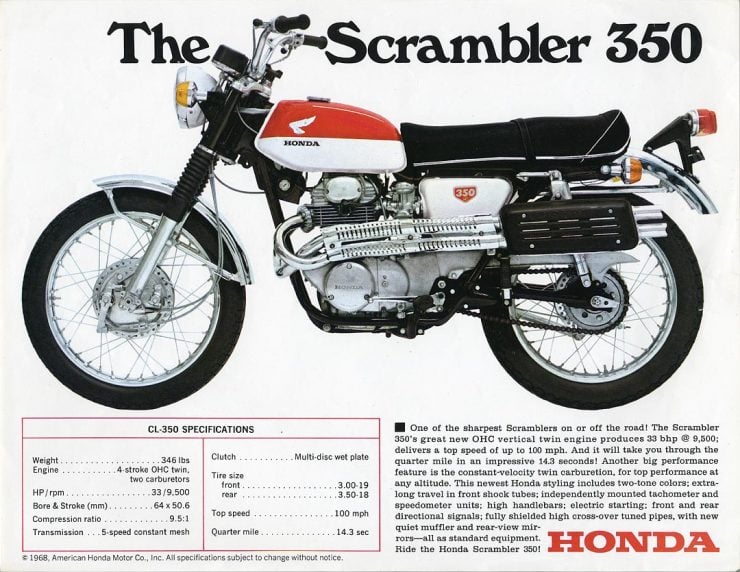 The CL350 represented the first of the larger capacity CL scramblers. These bikes have highway capability even with two adults on-board – giving their owners the ability to ride interstate or even further afield. Honda sold the model between 1968 and 1973. 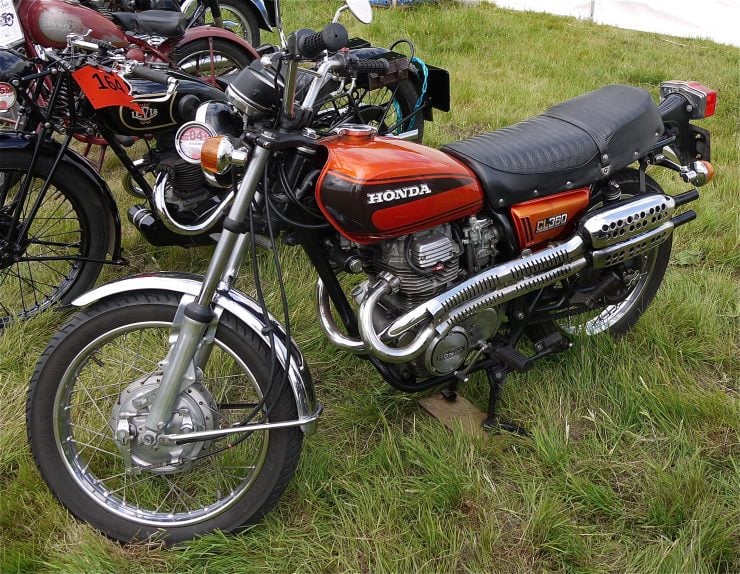 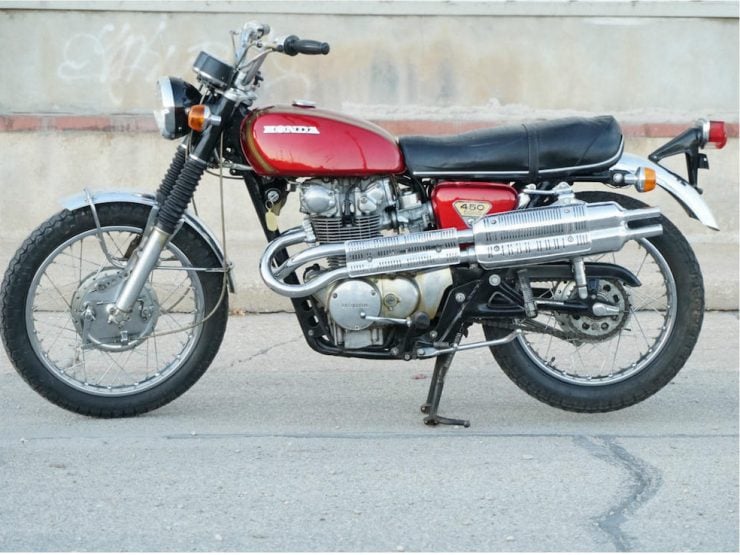 This is the largest and most desirable of the CL series, perhaps even its culmination. The CL450 is highly sought after by collectors and its combination of looks, reliability and chuckability is a recipe that means most owners keep theirs for a very long time. 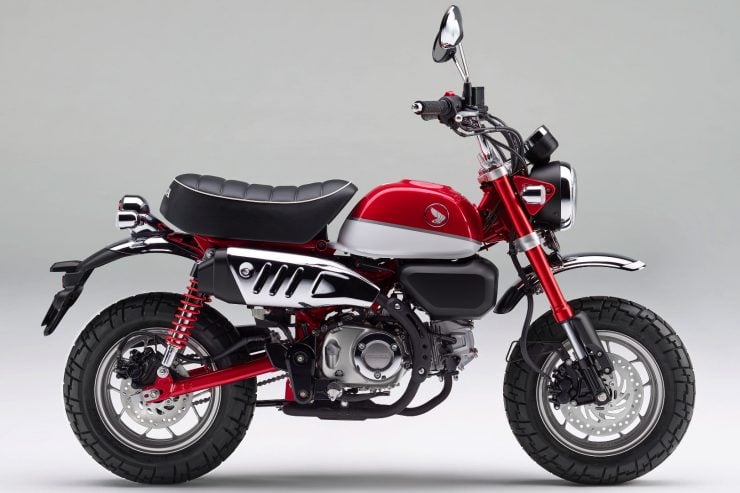 The new-for-2019 Honda Monkey is an all-new design based on the iconic Monkey bikes of the 1960s and ’70s. You may not have expected to see this bike in a list of Honda scramblers but it ticks all of the boxes for the scrambler genre including the raised exhaust pipes with a heat shield, raised fenders, dual sport tires, and high handlebars.

Though you may not want to cross the Sahara on it, the 2019 Honda Monkey is more than capable of light dual sport activities like exploring forest fire trails. Each Monkey is fitted with a single-cylinder SOHC 125cc engine and a 4-speed gearbox, and it tips the scales at 236 lbs (dry). With an MSRP of $3,999 USD (depending on region), the Monkey is already proving a popular with adults and children alike, and it’s doing a great job of living up to its esteemed forebears. 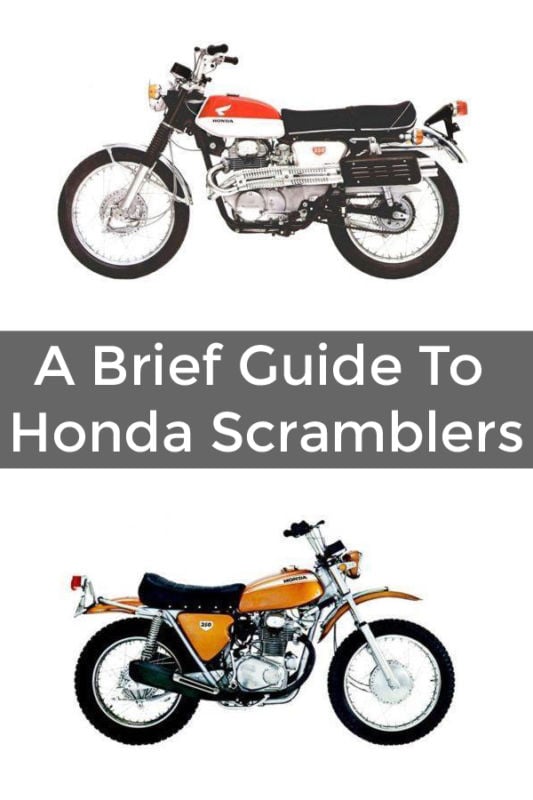 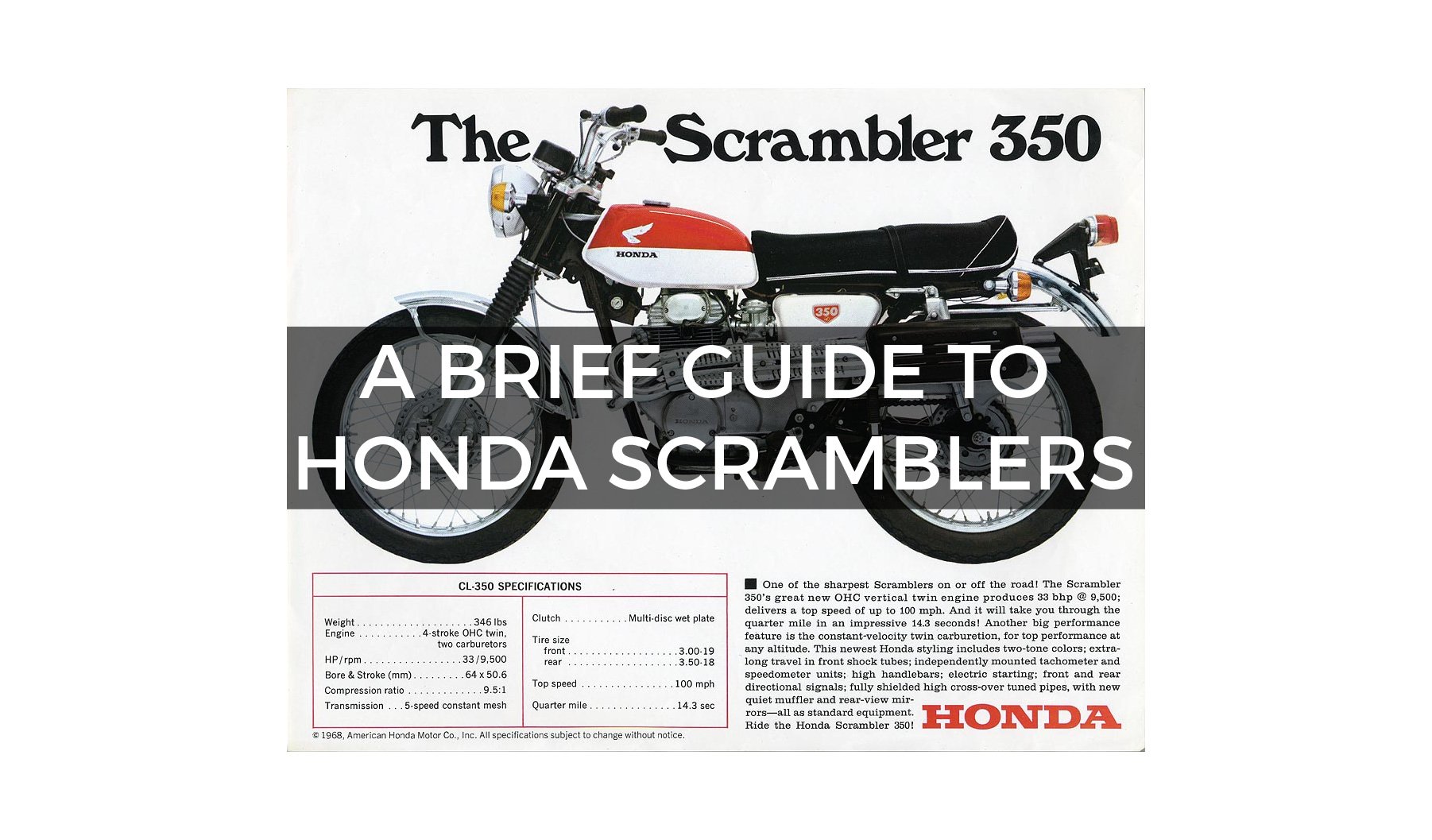