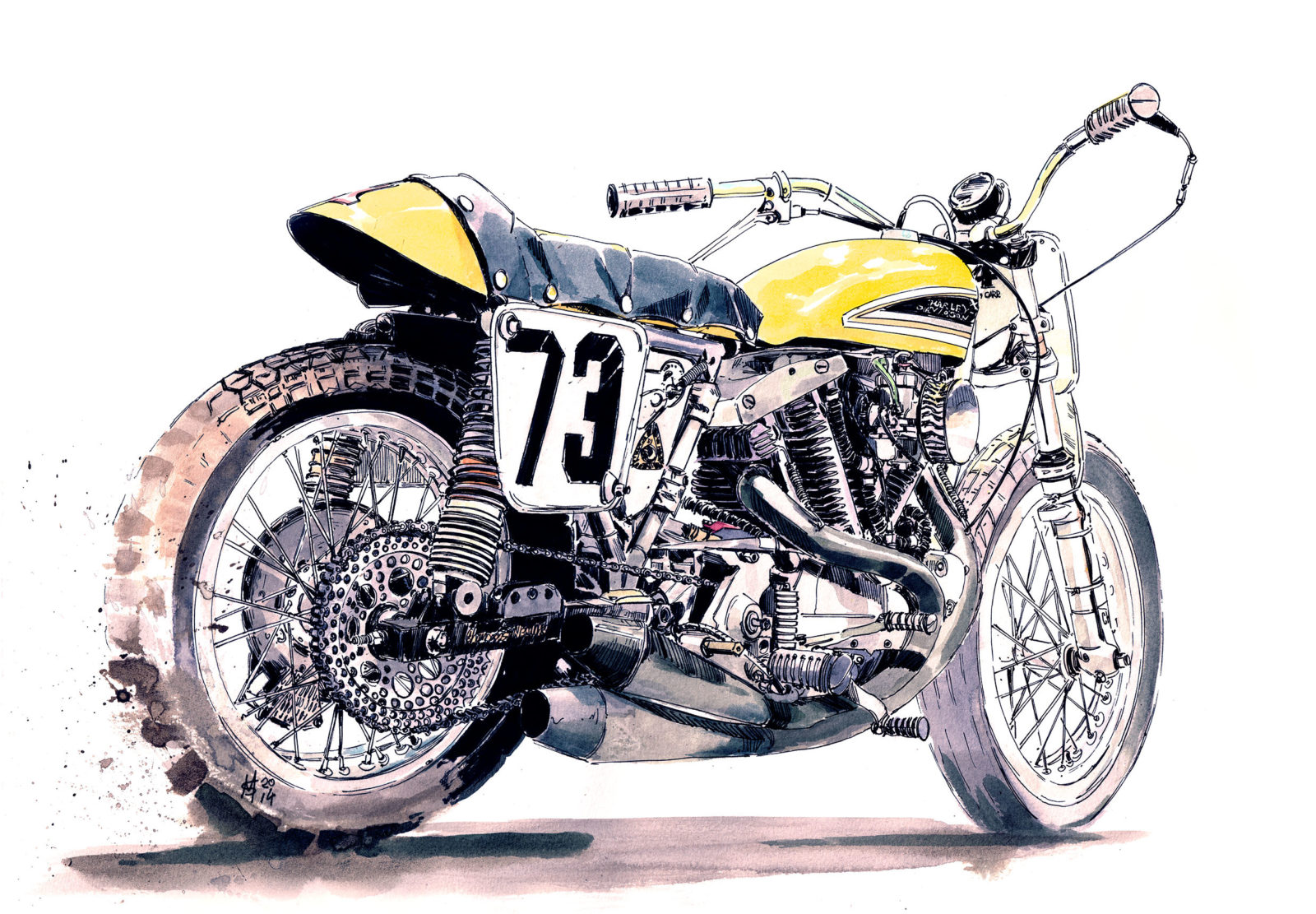 Illustration and Words by Martin Squires

At the end of 2014 I visited the Birmingham NEC in the UK to sketch at a motor show. Whilst looking at the Harley-Davidson Riders Club stand I spotted this muscular Harley-Davidson XR750 which just looked the part. I sat down and sketched it without looking at the information boards. I was approached by it’s owner Alastair who informed me that this is a piece of flat track history.

Bought as a road legal machine in 1992 Alastair did not really know much about flat track racing at the time he hadn’t even seen the film On Any Sunday. When a listing for the XR750 came up Alastair went to have a look, more out of curiosity than with a view to buying the machine. Once he had seen and heard the real thing it was a different story; he had to have it.

After getting the machine Alastair soon checked the engine number: 69XR001 and based his research on this linchpin. Writing to Allan Girdler a well-known Harley-Davidson expert Alastair hoped to find out more. Allan immediately knew what the engine was and replied asking “You don’t know what you’ve got do you.”

It was from here that a great story unfolded. 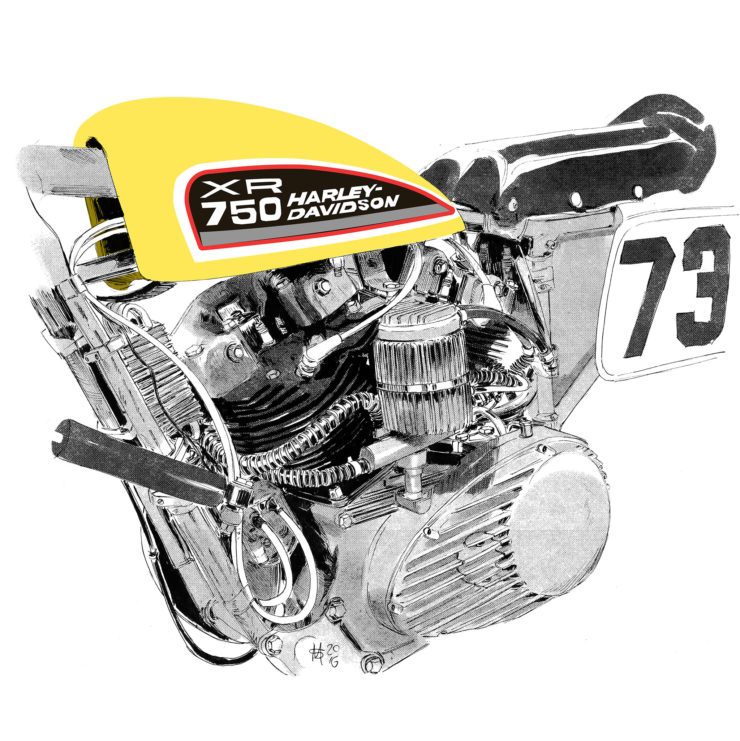 In 1968 the AMA (the governing body for U.S. motorcycle racing) decided to abolish the OHV (overhead valve) equivalency rule for the 1969 season on the dirt and 1970 for road racers. The rule had allowed 750cc side valve machines like Harley’s KR to compete against 500cc OHV machines.

Harley-Davidson had already been working on an OHV replacement for the KR but lacked the funds to develop it properly. They started working on an interim solution but were unable to enter them into the national championship until 1970 due to not being able to produce enough OHV machines to comply with homologation rules which required 200 motorcycles.

At the same time Bill Werner was working in the HD race department as an engineer. Out of hours Bill began working on his own OHV racer project, doing similar things but in his own way. Starting with parts from the Harley XLR and the XL road bike, modifying the pistons and making his own cams and working on the valves and head which included locating the plug in the middle of the head for better combustion.

Breathers, vents, and drains were added to suck air into the crank case which in turn pushed through oil which helped cool the typically hot Sportster engine which had cast iron heads and barrels. Lowering the compression also helped keep the engine running at a more sensible temperature.

Bill was the first to do these modifications and he did them with great precision. Alastair said when he first heard the machine start up it ran like a watch, which he didn’t expect from such a muscular machine. It was not long before HD started to publish in their Race Department Bulletins that engineers should follow suit and lower compression and improve the crankcase venting and oil cooling. 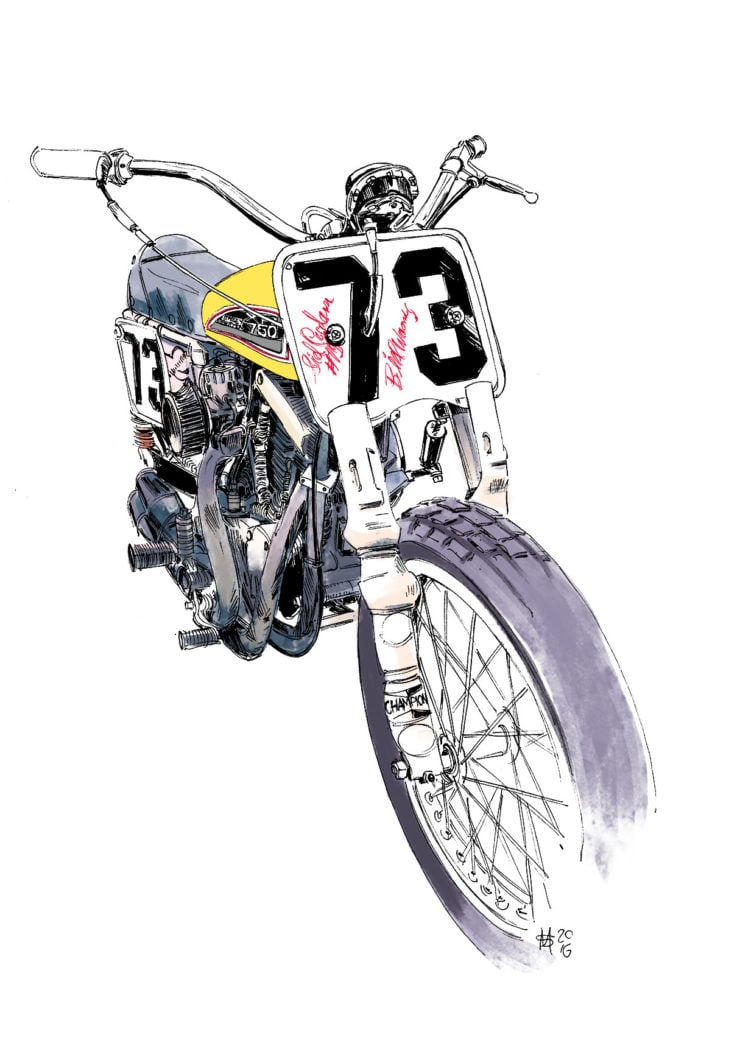 Bill did not only work on the engine, he made the frame himself in his basement at home, helped by his brother. With Alastair’s original purchase he didn’t have the original frame, as with most race bikes parts had been removed and moved on when the bike changed incarnations.

One day out of the blue he had a call from historic flat track racer George Wills who had bought a load of spares form Bill Werner including the original frame. George proposed they swap frames as he was restoring a stock XR and wanted to see the original Werner frame he had reunited with Alastair’s engine.

Alastair headed out to the United States and the deal was done. Whilst out in the States Alastair met with Allan Girdler and Bill Werner and with this unique opportunity found out more about the machine’s history. 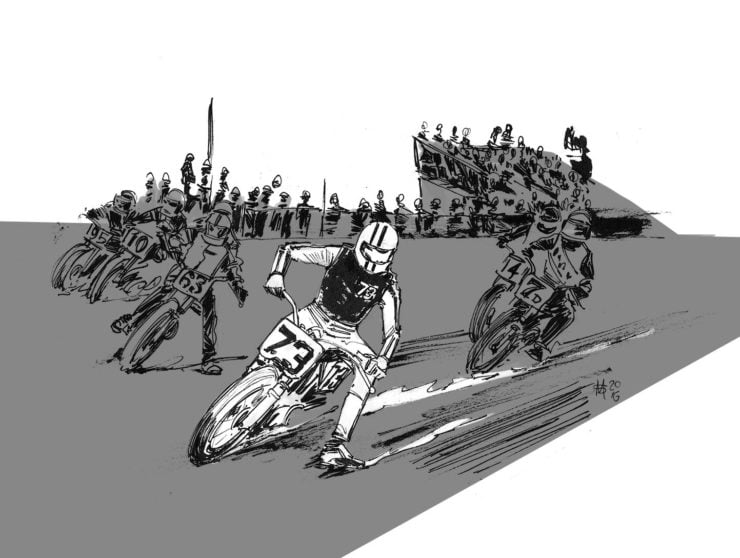 In 1970 the machine was raced independently from the HD Race Team by #73 Sid Carlson. Sid, a close friend of Bill Werner was a top rider of the period achieving good positions in the National races as well as earning money riding at county fairground races where he excelled on the XR. During this time, Bill was able to use the bike as a test-bed and try out his ideas.

The knowledge gained from independently racing the prototype was passed down by Bill to the engineers in the HD Racing department. Bills efforts and subsequent knowledge of what could be done with the overhead XR750 led to HD producing the 1972 XR750, which with alloy heads and barrels, became the world’s most successful racing motorcycle ever. Evolutions of this machine still winning on dirt ovals today. Production finally ceased in 2015.

In due course, Bill Werner fitted an alloy XR engine on his frame, installed the iron motor in a stock XR frame and then sold it. It continued to be raced in this form until 1974 when brakes were added to make it road legal. It and was used in Canada until 1984 when it was sold to a buyer in the UK, passing through a couple of owners until Alastair bought it.

After buying the machine and subsequently discovering this important turning point in dirt track history, Alastair spent the next 20 years faithfully and sympathetically restoring this prototype machine to the condition it was raced. I for one am glad that he did as, complete with its battle scars, this is a true Motorcycle Special. 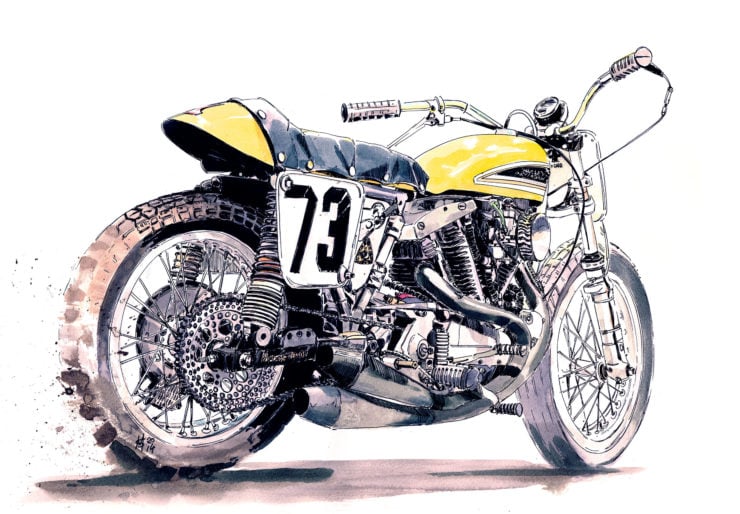 Martin Squires has an obsession with motor powered transport. A major part of his practise is sketching at motoring events.

The results of a days or weekends sketching are used to inform further research and writing on the history of motorcycles. Regular articles are published in ‘The Classic Motorcycle’ magazine and Hargerty.com

This obsession started through a family connection with Morgan Three Wheelers and various British Motorcycles.

Combining this obsession with a natural talent for sketching and painting Martin has developed a distinctive style which has evolved through a combination of reportage sketching and studio work.

Published by Martin Squires - June 29th 2022
Related Posts
The Bimota SB3: The Fastest Production Motorcycle In The World In 1979