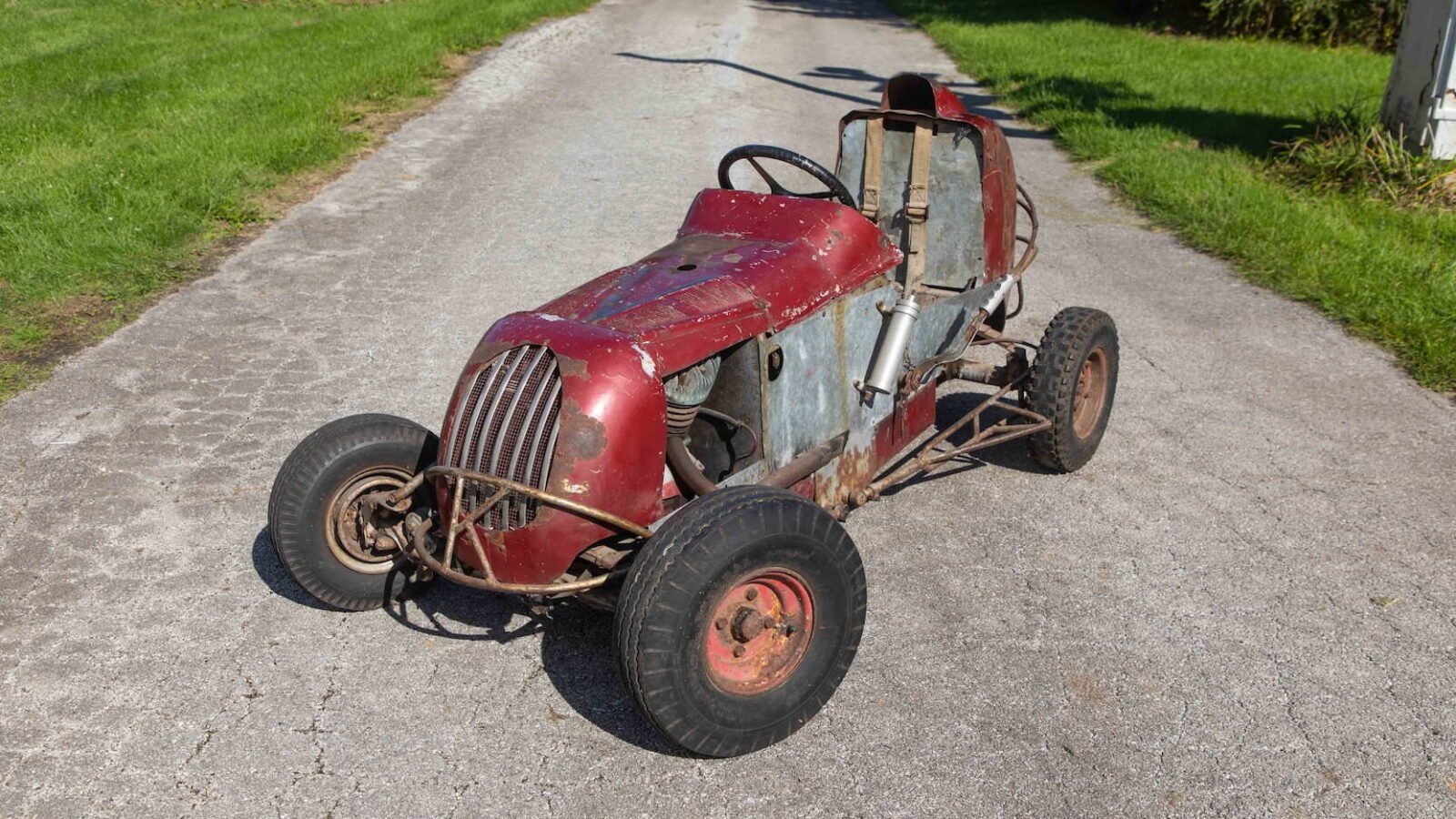 This is an original 1949 TQ midget race car that’s powered by a 45 cu. in. Harley-Davidson Flathead engine, it’s never been restored and so it’s kept all of its hard-earned battle scars from years competing on American oval tracks.

Midget car racing was started to give an affordable entry point into motorsport for people with limited budgets, the first midget car race was held on the 10th of August, 1933 at the Loyola High School Stadium in Los Angeles. The popularity of the new racing series skyrocketed, fans loved the fast cars and the underdog status of the drivers, many of whom built their own cars.

Australia and New Zealand began hold their own midget car races by the end of the 1930s, and the sport remains hugely popular in all three countries. Midget cars are typically powered by highly tuned inline-4 cylinder engines producing between 300 and 400+ bhp, the cars only weigh ~900 pounds (410 kilograms), so their power-to-weight ratio is excellent. 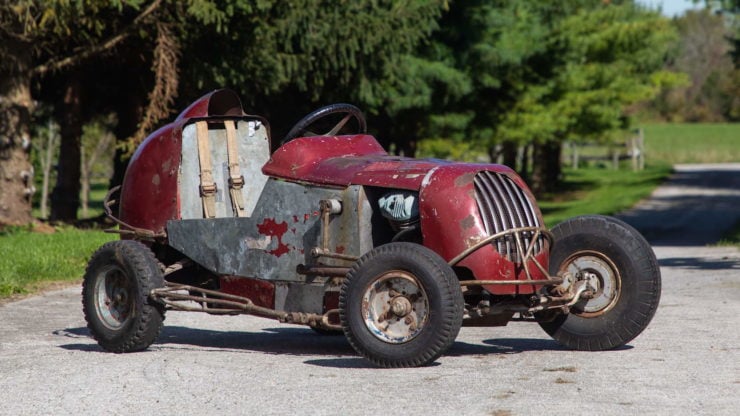 Although they’re built for circle track racing midget cars have had some successes in other racing disciplines, Rodger Ward once famously beat an entire field of Formula Libre cars to win a race in 1959 at Lime Rock Park. He also competed in the 1959 United States Grand Prix for Formula 1 cars driving his midget car, however this endeavour proved far less successful and he retired with a mechanical failure after 20 laps.

For this who wanted to compete a new slightly smaller class was created called Three Quarter Midget Racing, or TQ Midget Racing. As the name suggests, these cars are 3/4 the size of a full-sized midget race car. This means they can run smaller, cheaper engines, and they’re cheaper to build. TQ midgets often run in support races for regular midget car racing series, and it’s the TQ cars who probably most closely resemble the original intentions of midget car racing from 1933. 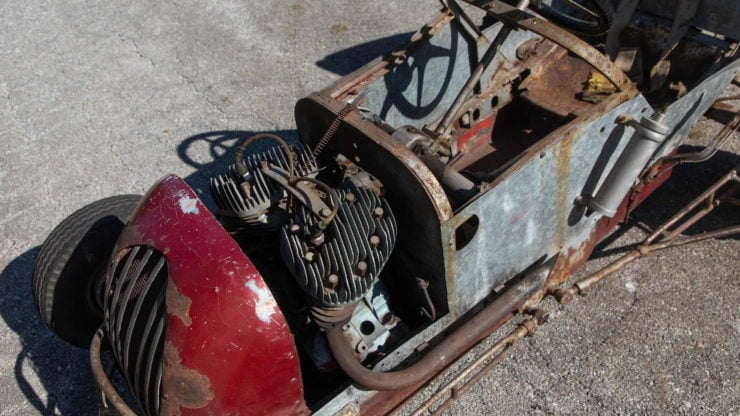 The Harley-Davidson powered TQ midget race car you see here was built in either the late 1940s or early 1950s by a home builder, it’s powered by a 45 cu. in. (750cc) Harley-Davidson flathead engine that was possibly sourced from a WWII-era Harley-Davidson WLA – the military bike built by the manufacturer for the American forces during the war.

WLAs were plentiful in the post-war years and very cheap to buy, so they were used for all manner of purposes, from commuting to flat track racing and everything in between. In stock trim the 45 cu. in. engine produces 25 hp at 4,500 rpm and was capable of 65 mph (105 km/h), however these engines were often heavily tuned for racing and would produce considerably more power.

This TQ midget car is in complete condition but it clearly needs a thorough restoration, once complete it’ll make an excellent, affordable little vintage circle track racer. If you’d like to read more about it or register to bid you can click here to visit the listing on Mecum. 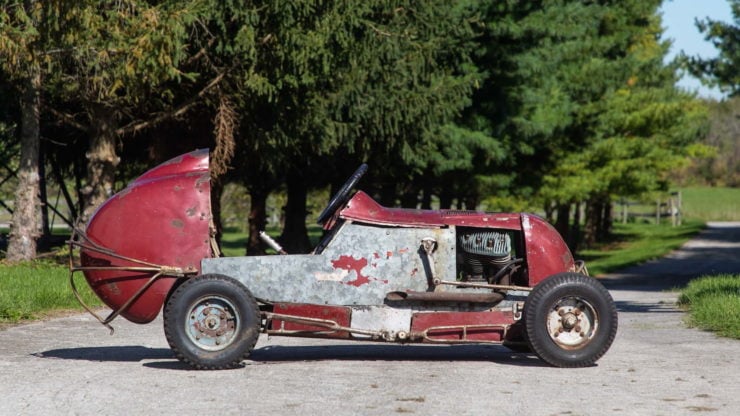 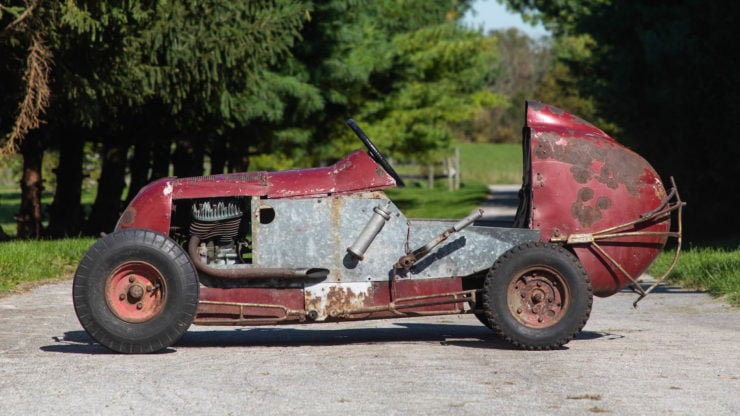 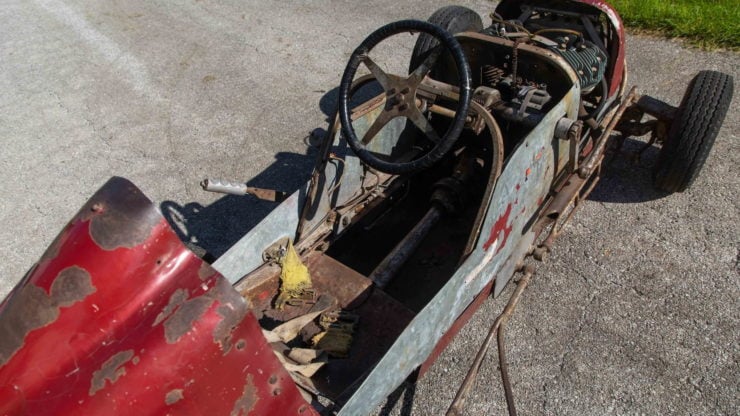 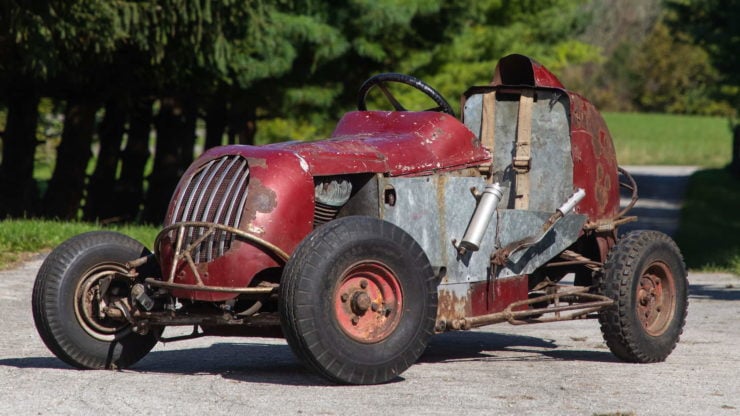 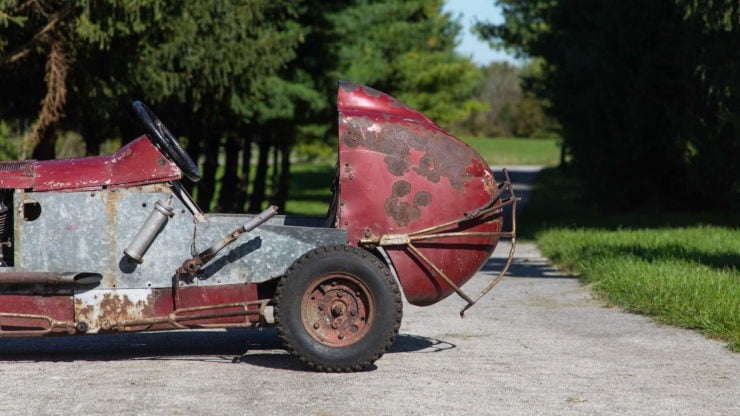 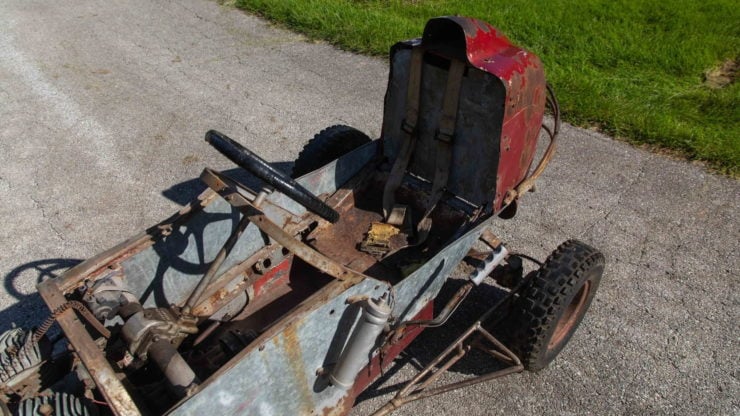 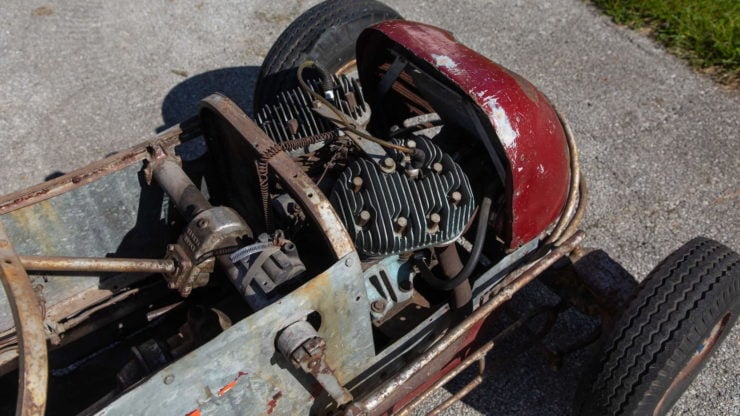 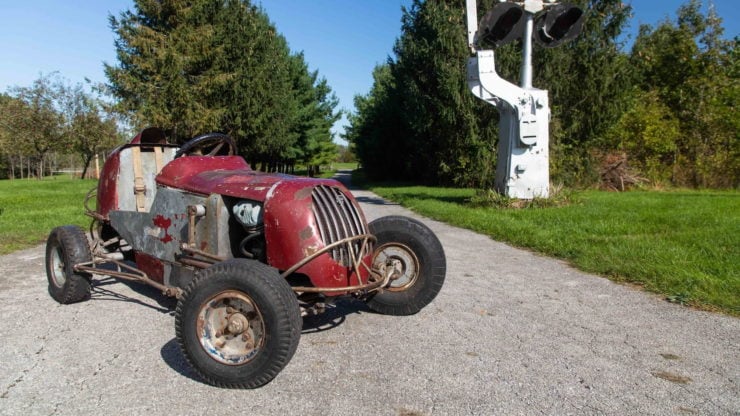 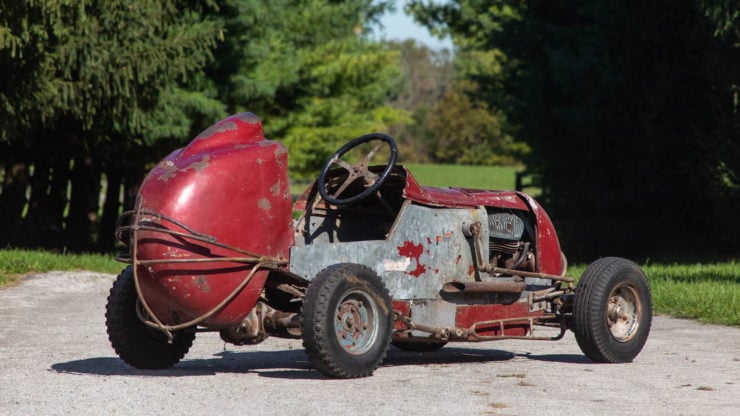 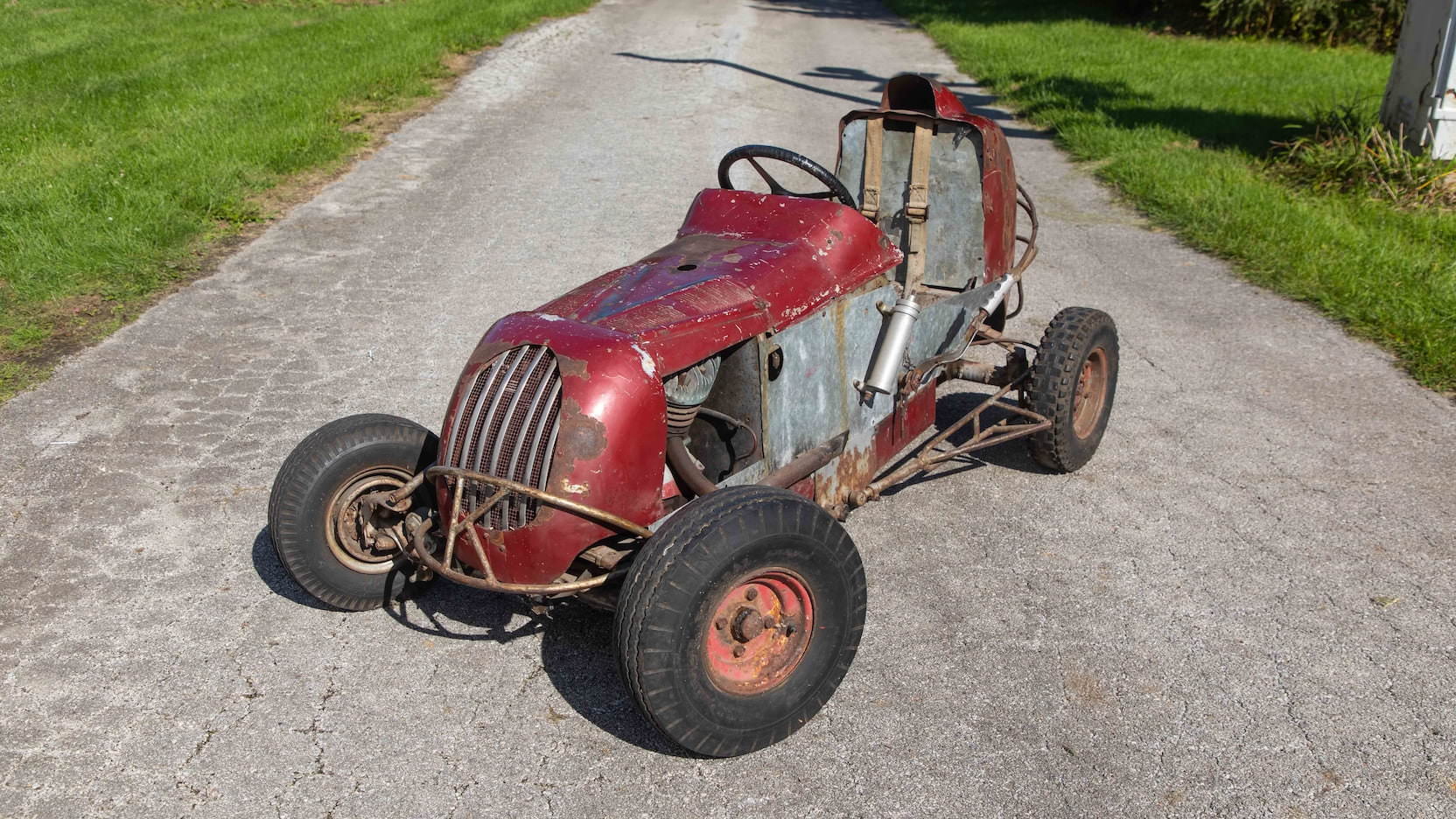