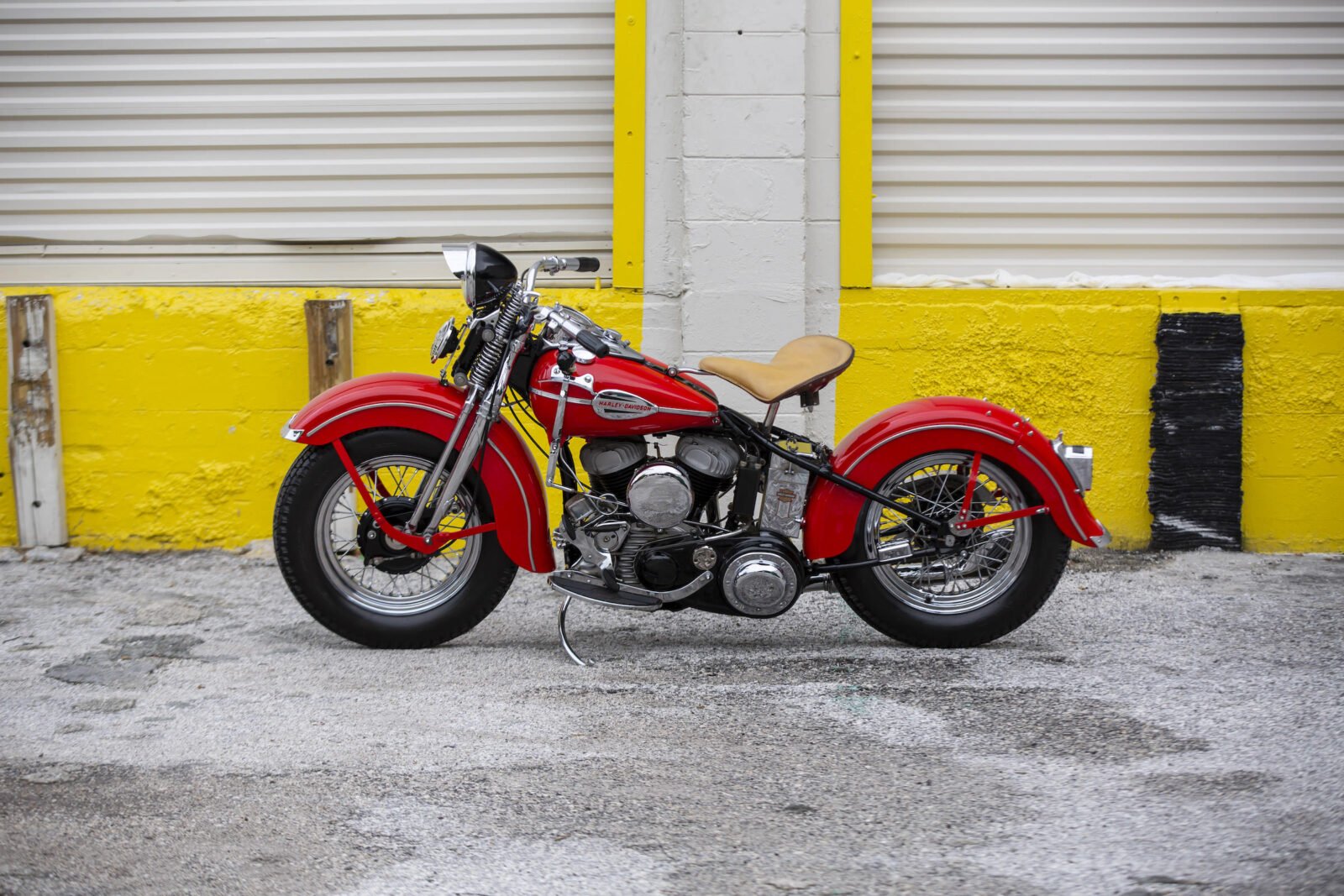 The Harley-Davidson WLA was designed to be an exceptionally tough motorcycle for use in the Second World War that could ford a stream up to 16 inches deep, carry 40 lbs of equipment, run on very low octane fuel, and remain reliable in environments ranging from the deserts of North Africa, to the Soviet Russian tundra, to the jungles of the Pacific theatre of war.

Although the WLA is a mechanically simple motorcycle, it’s simple in the way that makes it strong – it’s certainly not fragile, delicate, or temperamental.

Harley-Davidson began producing the WLA in smaller numbers as early as 1940 as part of their general military expansion as WWII took its hold. In 1942 after the United States joined the war the production numbers of the WLA skyrocketed, over 90,000 would be built between 1942 and 1954, with enough spare parts to build an additional 30,000. 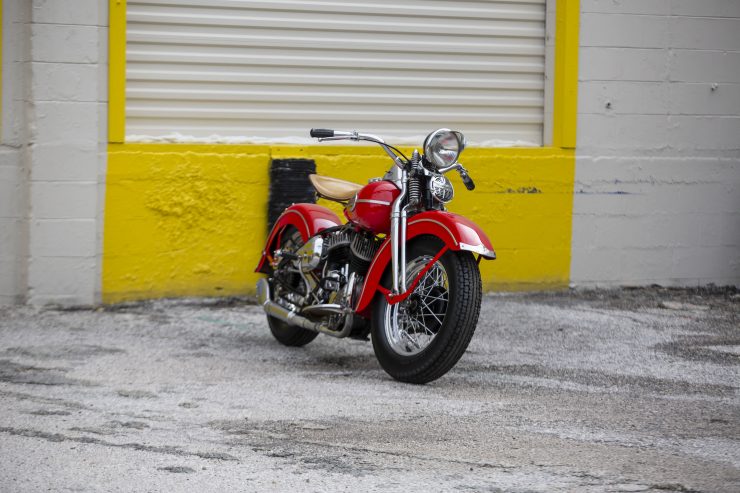 Each WLA was powered by a 45 cu. in. (739 cc) side-valve V-twin, it was a simple air-cooled engine with an oil bath air cleaner like a tractor, 25 hp at 4,500 rpm, and a 3-speed hand shift transmission. The tubular steel frame had no rear suspension, this necessitated a sprung saddle, and there was a springer front end.

The model name breaks down as “W” the model series, “L” high-compression, and “A” for army. The “L” was perhaps a little misleading as the model that made it into military service had a compression ratio of 5:1 which was low even by the standards of the time, but it needed to be due to the low grade gasoline used by the military.

Unlike the civilian Harleys of the time, the WLA would be fitted with simple fenders with no sides so as to avoid mud build up. 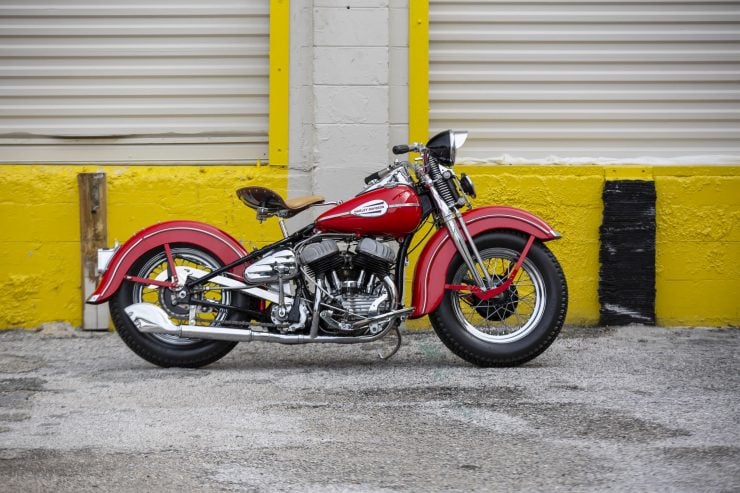 The headlight and tail light were designed to adhere to the blackout lighting policies of the time, they were mostly painted in olive drab, and they generally had a a heavy-duty luggage rack for radios, an ammo box, a leather Thompson submachine gun scabbard, and a sump protector.

Most Harley-Davidson WLAs were deployed to Europe where they became known as the “Liberator” as they were often the first allied vehicle that people would see (along with the Jeep) after being liberated.

Many who rode them would seek them out after the war and buy them back in the United States. Military surplus WLAs were sold to the American public after WWII offering affordable motorcycling to an entire generation of young men who had just been through the most significant conflict of the 20th century. 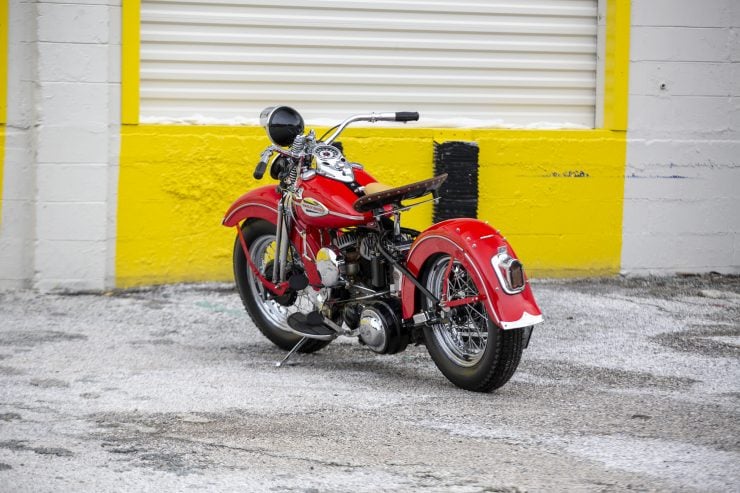 Some have postulated that this led to the advent of the first biker gangs, as young men seeking a refuge from society and a place to belong formed into groups, oftentimes riding their civilianised Harley-Davidson WLAs.

The 1942 Harley-Davidson WLA you see here had been converted to civilian specification, as most WLAs were after the war. It now features full fenders, normal head and tail lights, and no sign of the radio equipment, ammo cases, or sub machine gun holsters.

The bike has been finished in a tasteful red paint scheme with chrome accents, a tan saddle, a head light visor, and a 3-speed skull shifter.

One of the benefits of the large production numbers of the WLA is that they’re still quite affordable by vintage motorcycle standards, often selling for under $15,000 USD.

If you’d like to read more about this motorcycle or register to bid you can click here to visit the listing on Mecum. 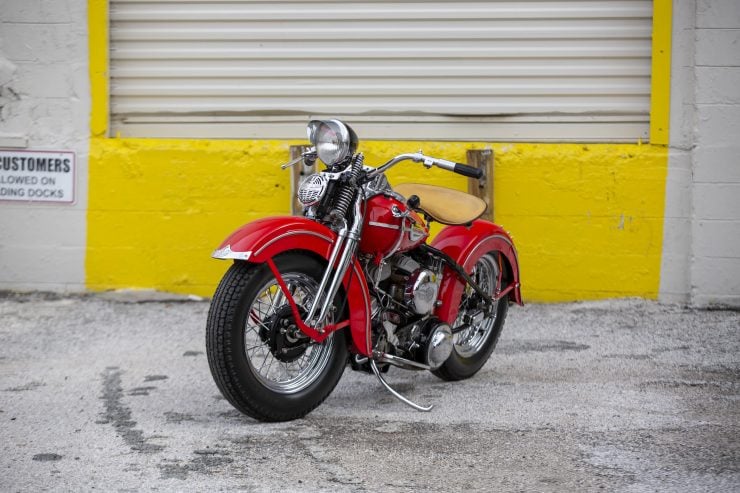 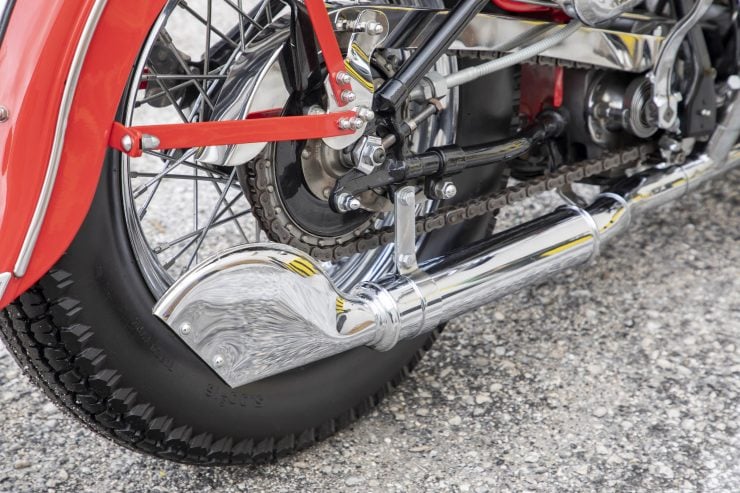 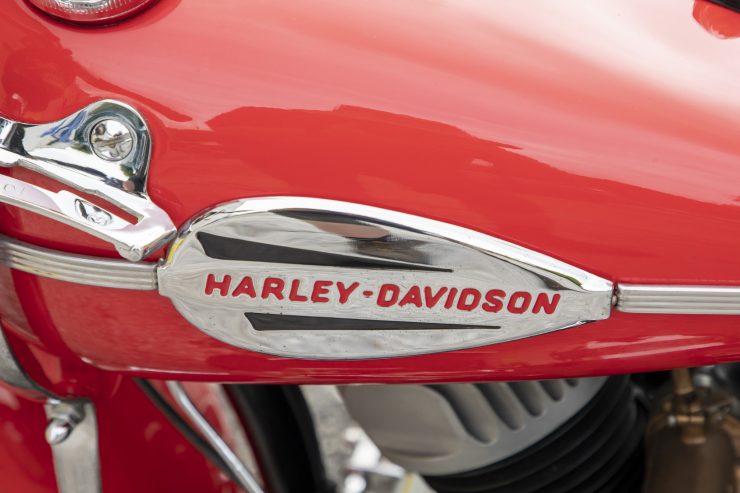 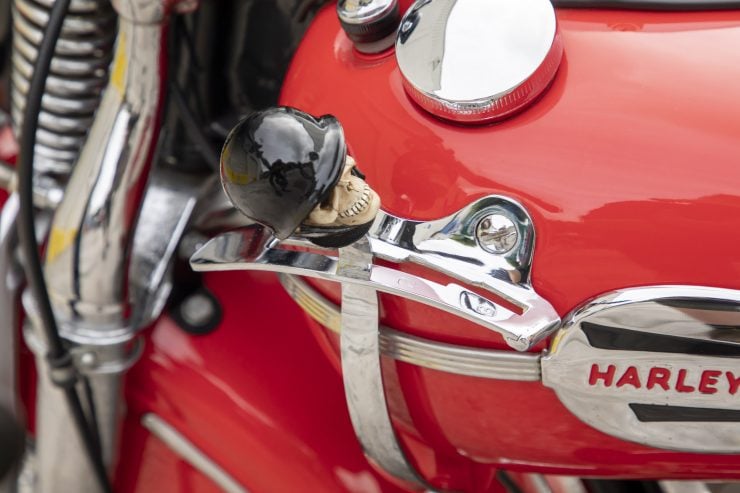 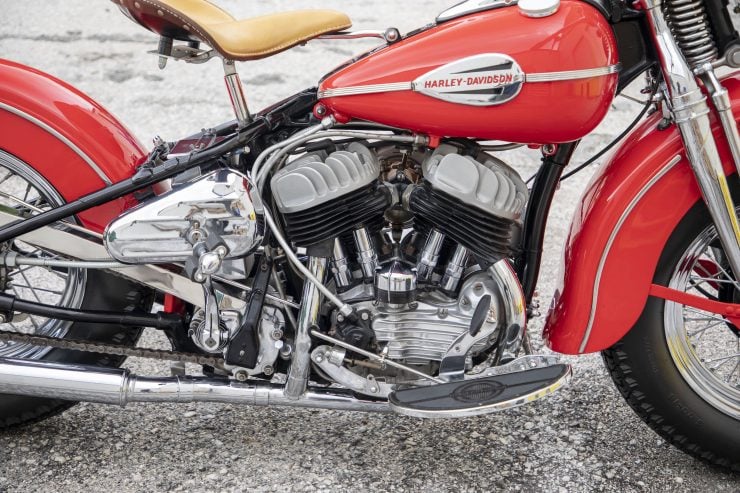 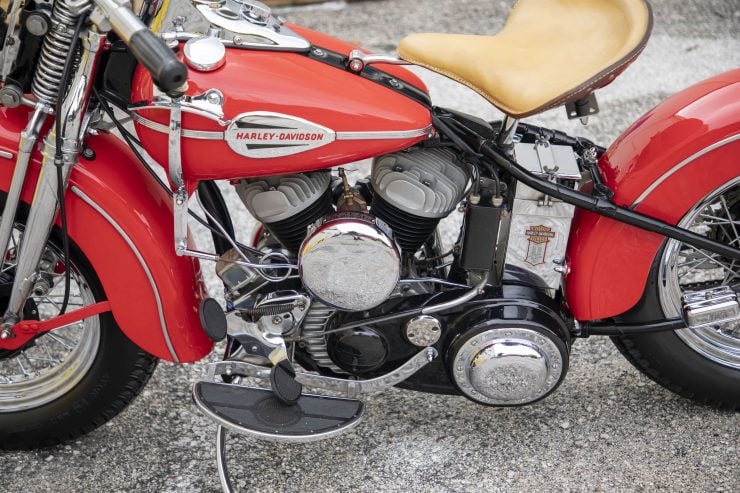 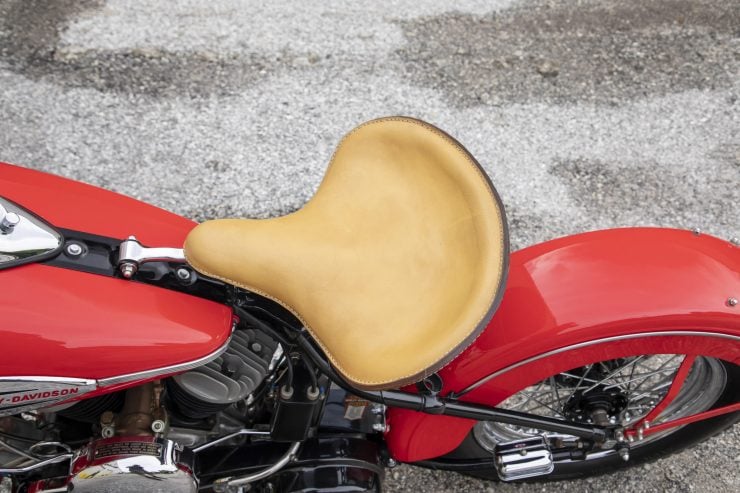 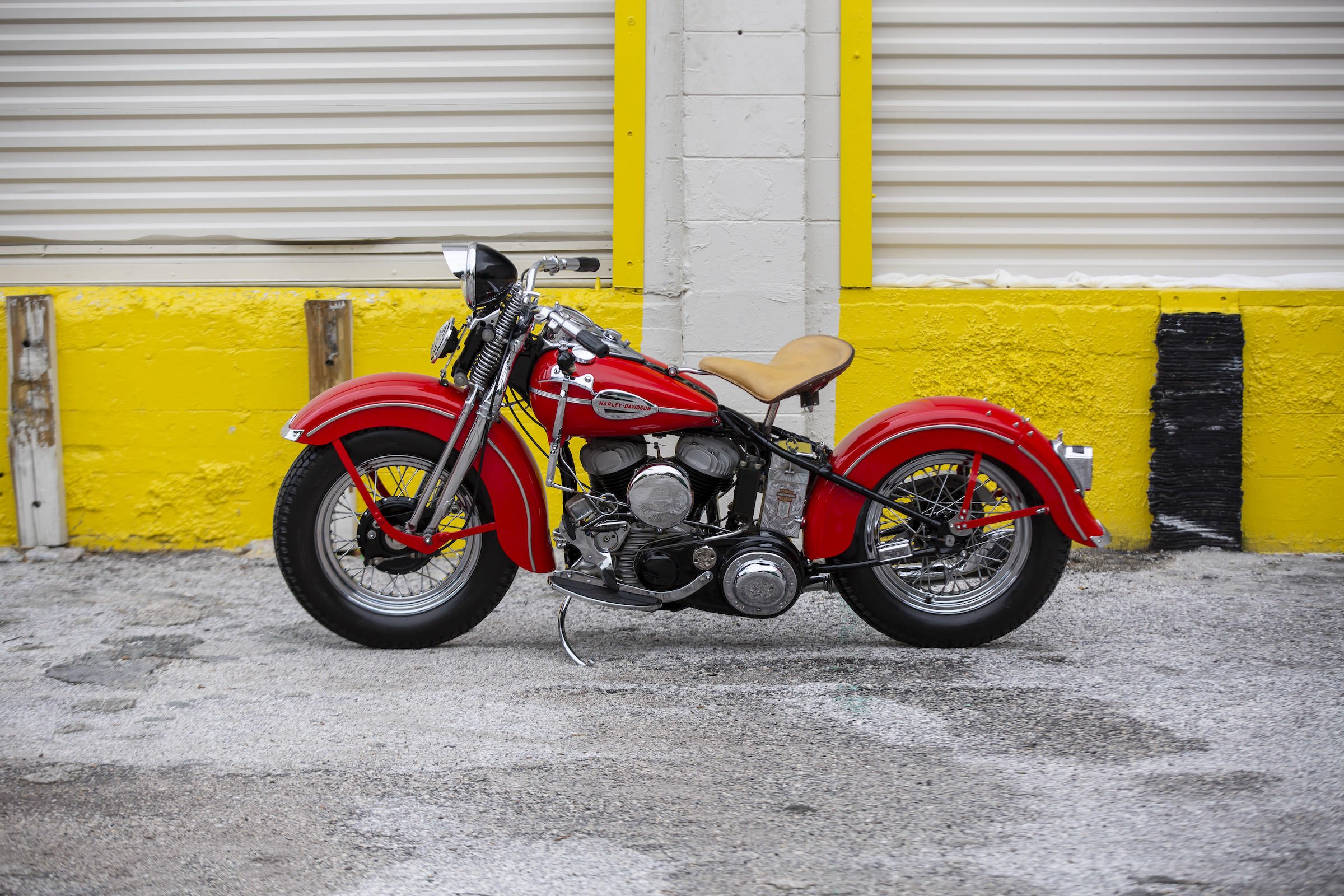