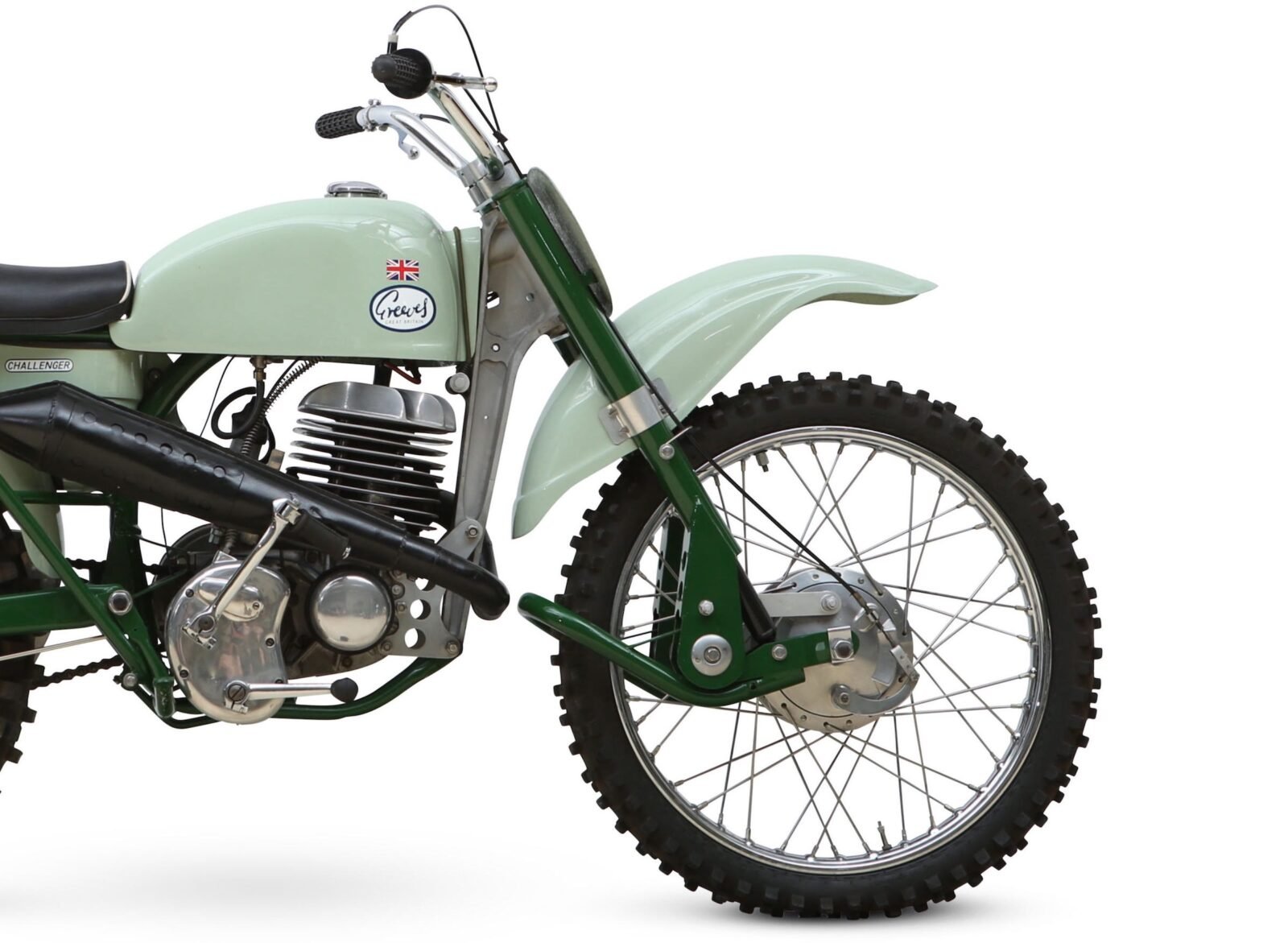 To say that the Greeves Challenger, and all Greeves motorcycles, were ahead of their time is to significantly understate the remarkable foresight of Bert Greeves and his lightweight two-stroke off-road racing motorcycles.

Bert developed the first examples of his scrambles and trials machines in 1952, almost 20 years before lightweight two-stroke motorcycles would rise to dominate off-road racing competition.

Bert Greeves and the Invacar

Bert Greeves had previously worked at the Austin Motor Company, but he set about designing and building a petrol-powered microcar for his wheelchair-bound cousin Derry Preston-Cobb who had been complaining about the many shortcomings of his battery-powered wheelchair.

The new Greeves-designed vehicle was named the Invacar for “invalid car” (pictured below) was essentially a weather-proof personal mobility scooter. The choice to use a petrol engine rather than an electric motor gave the car class-leading range and speed, and they could be fitted with either hand controls or foot controls.

A special “racing” version of the Invacar was built for Derry who was every bit the speed freak, his high-performance version was fitted with a 250cc racing engine that reportedly gave it a top speed of over 80 mph. There are countless stories from the era of Derry driving the car at high-speed, often flying past motorists much to their surprise, and apparently he needed to be rescued a number of times after flipping it onto its side or roof.

The British Ministry of Pensions ordered thousands of Invacars, and they revolutionized the lives of countless disabled people across Britain, this success allowed Bert the funding he needed to pursue his own personal passion project – motorcycles. 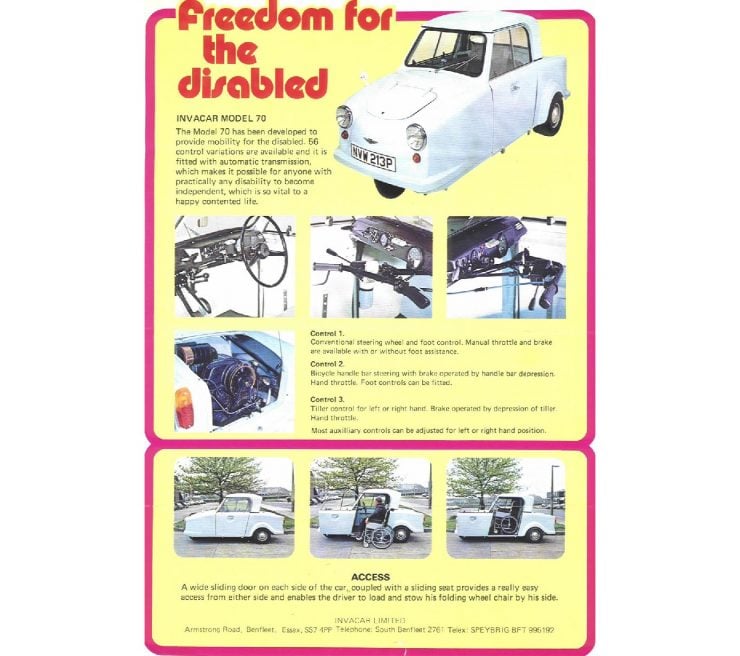 The commonly used off-road and scrambles motorcycles in the 1950s and 1960s were larger engined four-strokes, these were also preferred by the American off-road racers, particularly the Triumph TR6 Trophy, the Matchless G80SC, the Norton P11, and the Ariel HT5, though there were many others.

Bert realized that low weight was paramount for off-road use, and he recognized that a 200cc two-stroke engine could be ideal for this application. many at the time thought this would result in a motorcycle too fragile for aggressive off-road riding, but Bert set about designing a bike that could handle anything the world’s top riders would throw at it. The first person he hired to work on the new project with him was his cousin Derry, who proved an invaluable asset to the company, sharing Bert’s inherent engineering abilities.

Fortunately Bert was able to source a simple 200cc two-stroke engine from Villiers Engineering, he combined this with a bespoke frame with an exceptionally tough steering head and down tube created by casting LM6 silicon-aluminium alloy around a tubular frame member.

Perhaps the most famous feature of many (if not most) Greeves motorcycles is the use of leading link forks, often nicknamed “Banana Leading Link” forks. These are exceptionally tough and provide benefits including increased suspension travel over the still somewhat primitive motorcycle forks available in the early 1950s.

Greeves motorcycles would prove both very successful in off-road competition and very popular with consumers in Europe and across the pond in the USA.

During races Greeves bikes would often beat motorcycles of over double their engine capacity, and they would take wins in the International Six Days Trial, the Manx Grand Prix, the Scott Trial, the European Trials Championship and the Scottish Six Days Trial, as well as gold medals in the ISDT and the ACU 250 cc Road Race. 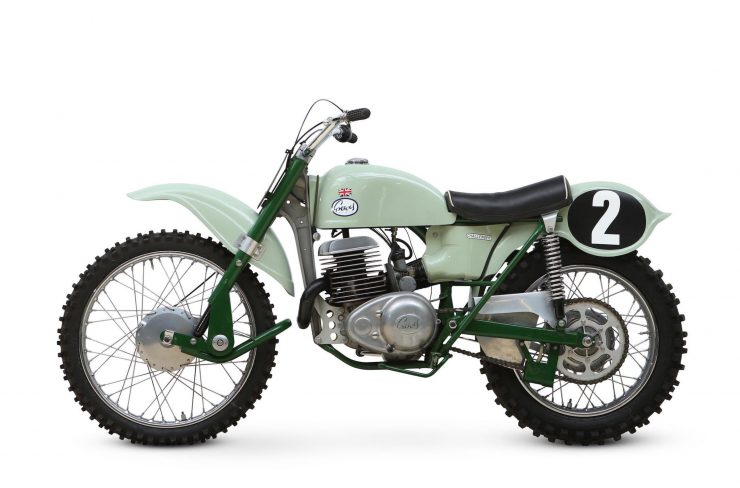 The Greeves Challenger is perhaps the most famous of the motorcycles made by the British company, the engineering that went into the two-stroke engine changed significantly over the years, and both on and off-road versions of the model would be offered.

That leading link front end gave the Challenger 6.5 inches of travel with almost no sliding friction, whereas comparable motorcycles of the era had approximately 4 inches of travel.

The Challenger is the motorcycle that proved Bert Greeves right, and arguably inspired the slew of two-strokes that would eventually swamp it. Today the surviving examples of the Challenger model fetch consistently solid prices when they change hands.

The 1965 Greeves Challenger you see here is a beautifully restored example with a 250cc two-stroke engine, and all of the signature engineering elements you’d expect with a Greeves. Bonhams are estimating that it’ll sell for between £4,000 and £5,000 when it crossed the block on the 23rd of September. 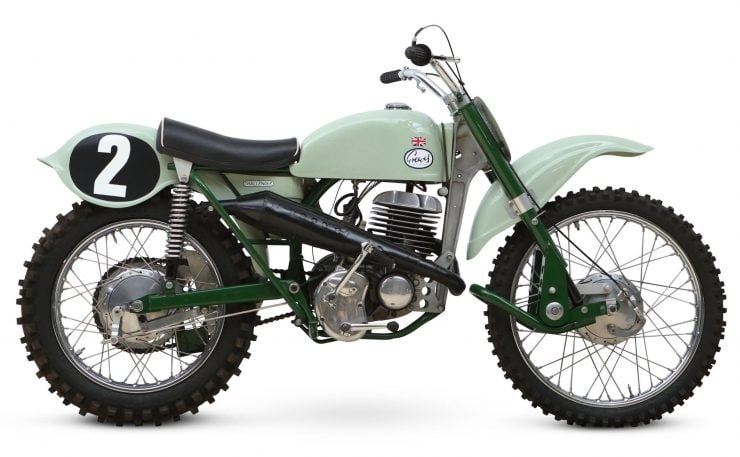 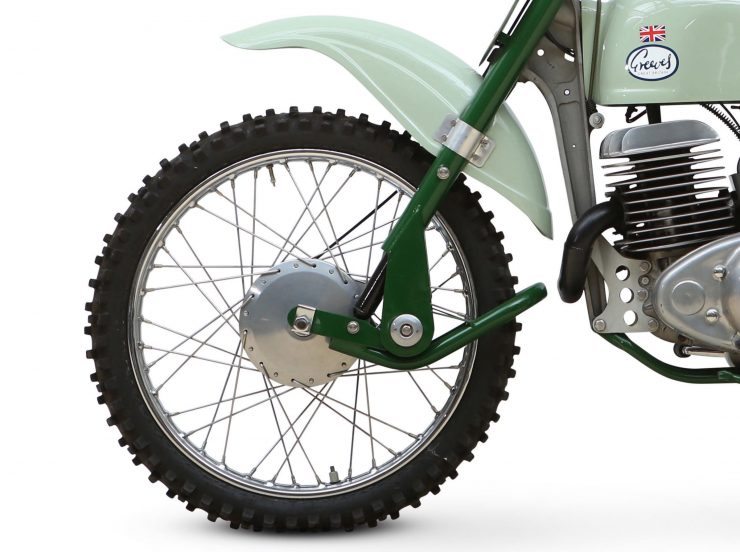 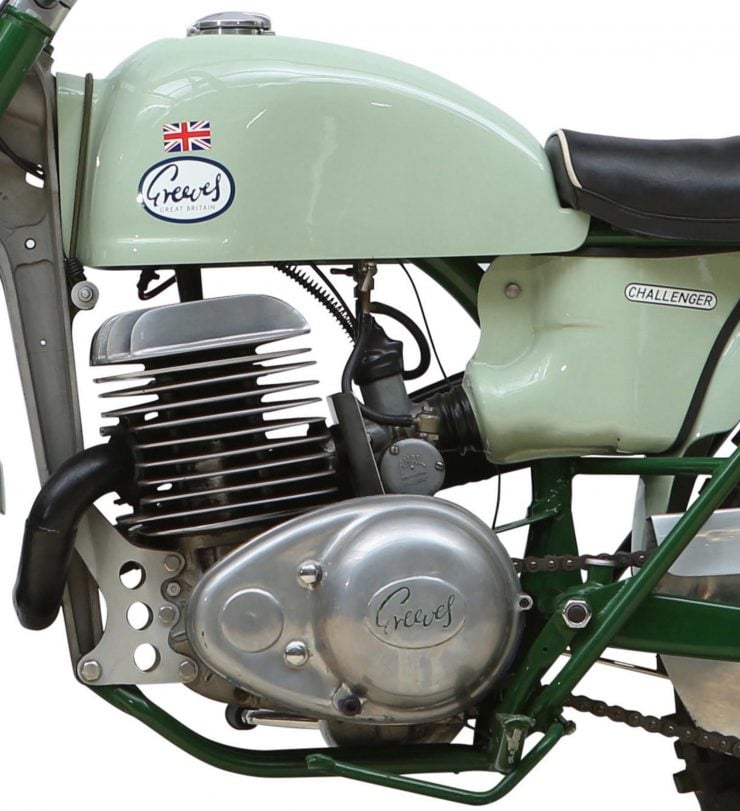 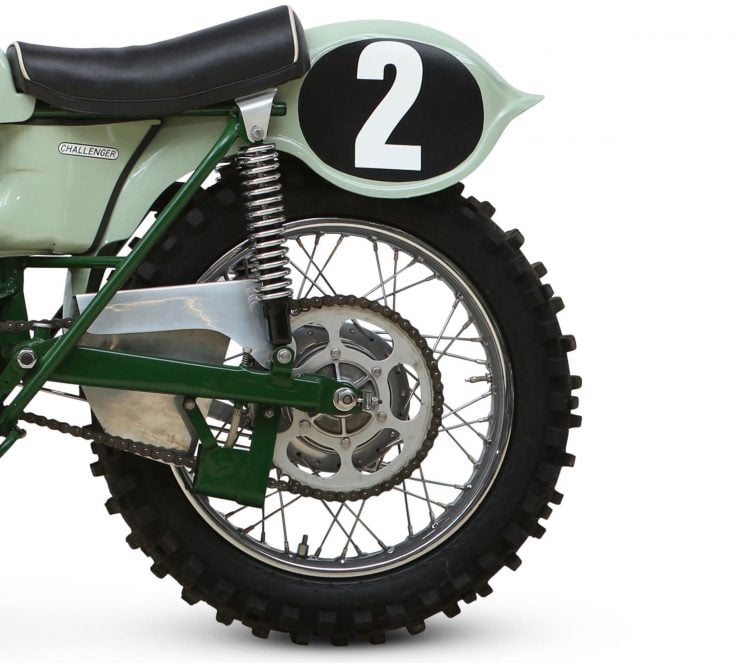 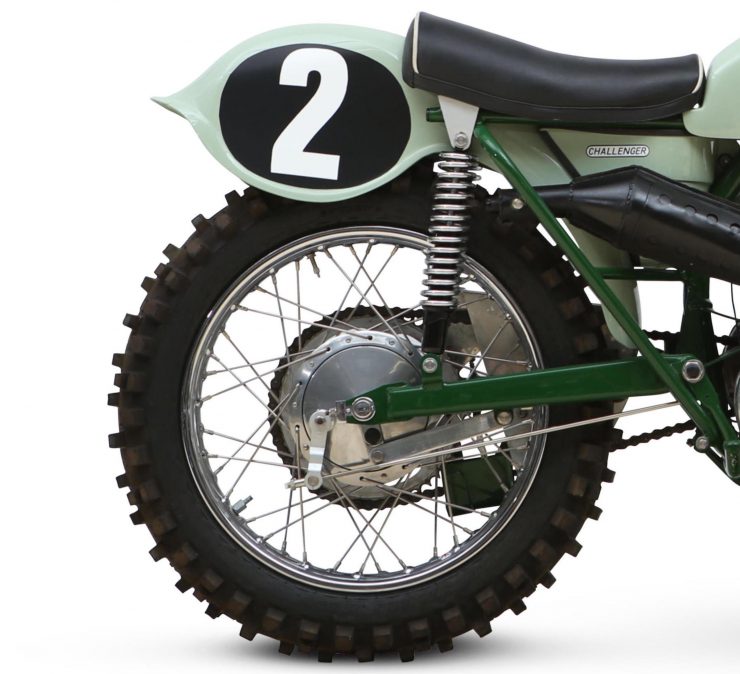 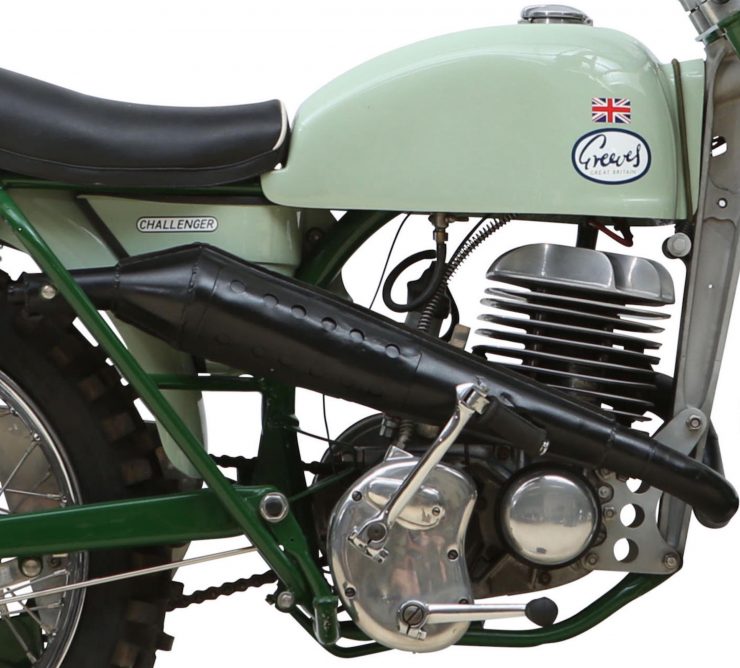 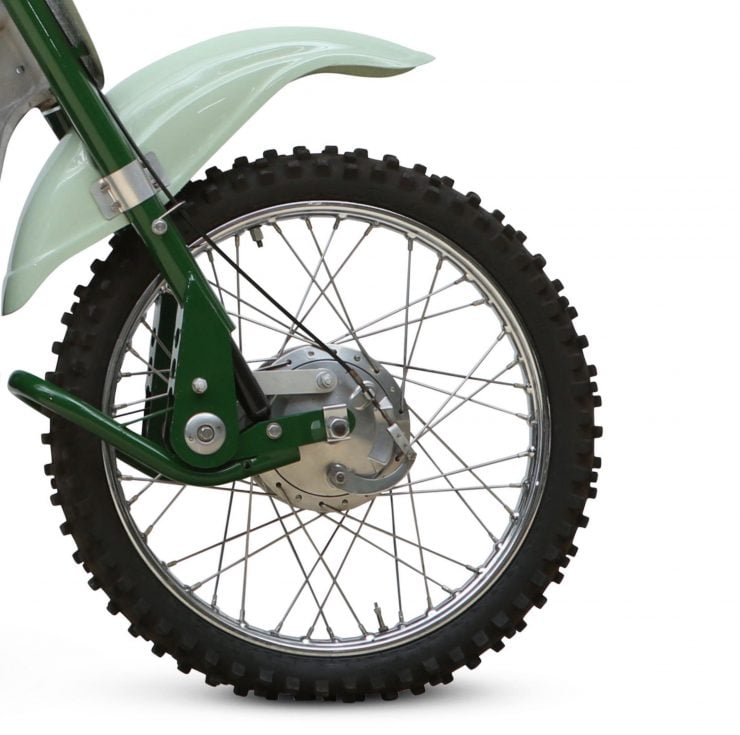 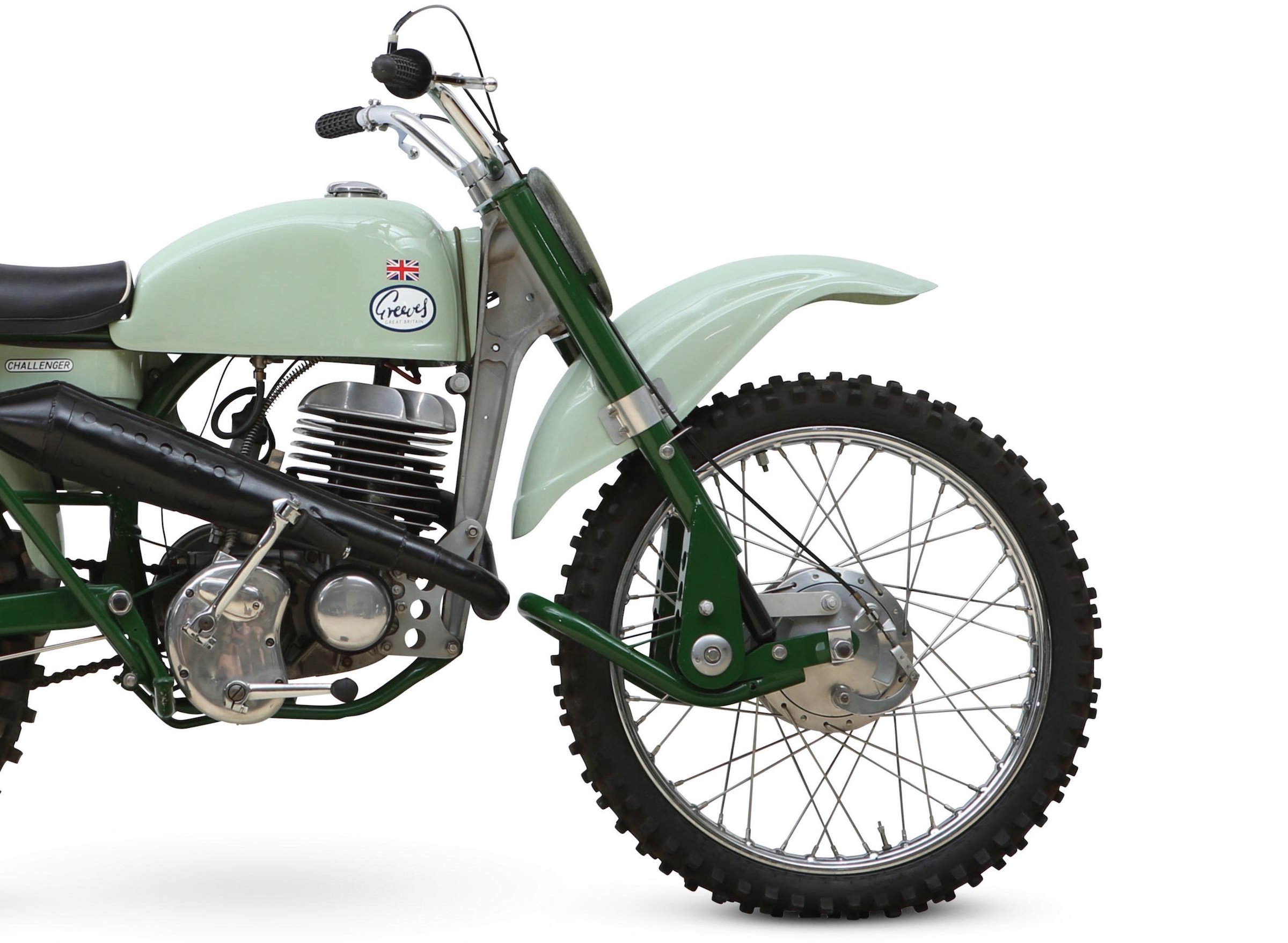