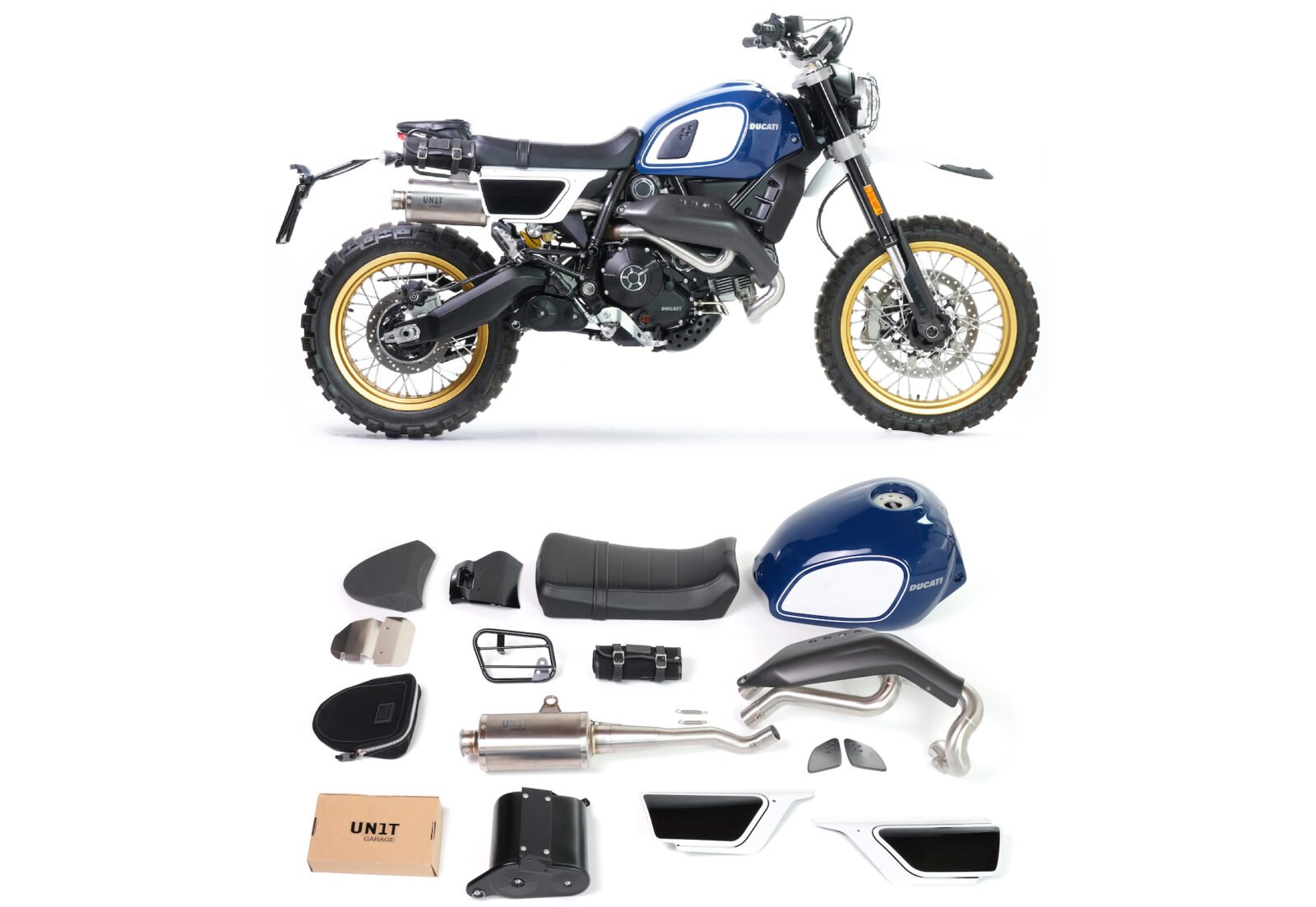 The Fuoriluogo Kit is a bolt-on set of parts for the Ducati Scrambler that transforms the look, sound, and feel of the bike, without making any permanent changes. The kit was developed by former 5 time Paris-Dakar Rally rider Fabio Marcaccini and industrial designer Michiel Verstockt.

Fabio and Michiel have a long history of making upgrade kits and parts for motorcycles from BMW, Triumph, Moto Guzzi, Yamaha, Husqvarna, Kawasaki, and Ducati. Their primary goal with each upgrade kit is to develop a function-first series of parts that can be bolted on that will significantly improve a motorcycle’s performance, and completely change the way it looks.

Whilst the Fuoriluogo kit is aimed at the Ducati Desert Sled 800, it’s compatible with all of the Ducati Scrambler 800 models. The Desert Sled is a sub-model from the Italian Scrambler family specifically designed to be able to keep up with many dual sport and adventure motorcycles off road. 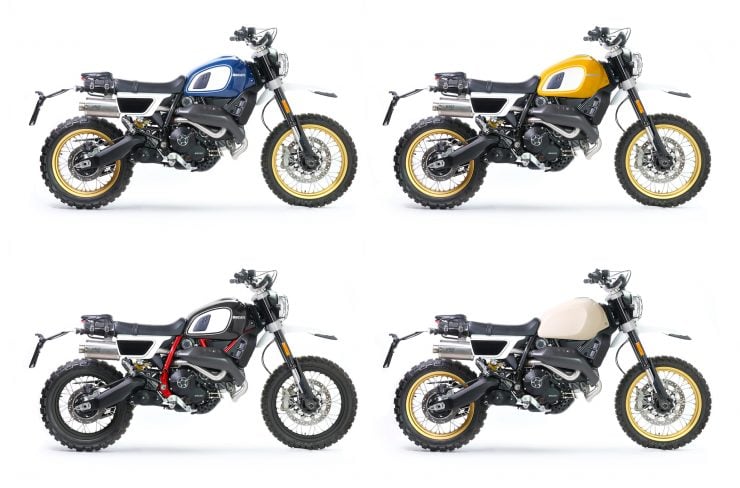 The Desert Sled has longer travel suspension front and rear, a bash plate under the sump, and a slew of other upgrades designed to make the bike genuinely capable off road on light to moderate trails. On road the model is well behaved, and offers a higher, more upright riding position that many urban riders like as it gives a great view over traffic.

When Fabio and Michiel set about designing this kit they wanted to make the bike perform better off road by allowing the rider to move their weight further forwards when needed. This necessitated an entirely new fuel tank, they designed one that would allow the same amount of fuel to be carried and use the same fuel pump as the original factory tank.

Riders can now get 6 centimetres closer to the handlebars, a significant difference when it comes to weight shifting and balance. A new lower profile seat is part of the kit, it has space for two but the rear seat is removable and replaceable with a small rear bag allowing you to pack away things like smart phones, snacks, wallets, etc.

The factory exhaust on the original Desert Sled is quite restrictive as a result of noise and emissions pollution legislation which is particularly restrictive in the EU. The new exhaust is notably louder and far less restrictive due to the lack of a catalytic converter, although it hasn’t been dyno tested it is reported to cause an instantly notable increase in throttle response and power, both of which are vital features for riding on the dirt. 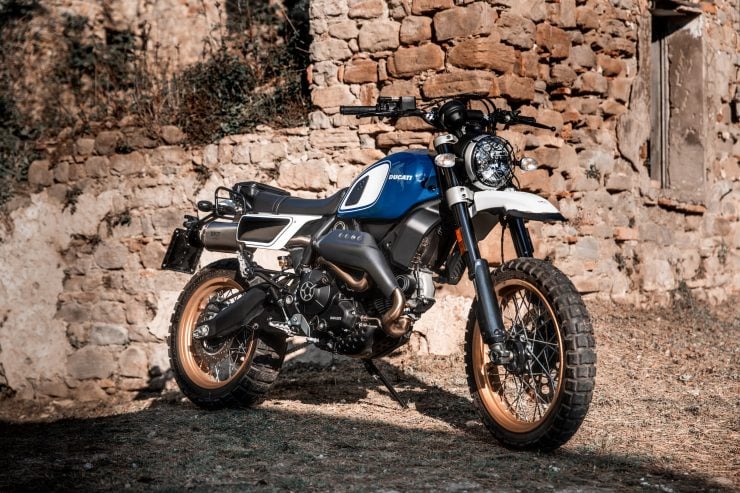 Each kit contains the new fuel tank and two part seat, the small rear bag, a small tool box that fits just above the swing arm pivot, the new exhaust and silencer, a pair of side panels, rubber knee pads, a rear frame cover, a side luggage rack, a handlebar bumper, a canvas tool bag, and a box with video assembly instructions as well as screws and brackets.

A less comprehensive kit is also available for those who just want the fuel tank, seat, and side covers. When ordering either kit you can choose between yellow, blue, dark grey, or unpainted fuel tank colors.

Unit Garage have made a name for themselves over the past few years with their upgrade kits, and anyone who’s seen a motorcycle fitted with one in person will attest to the built quality. If you’d like to visit the website you can click here, and if you’d like to see the kit for the Ducati Scrambler 800 you can click the red button below. 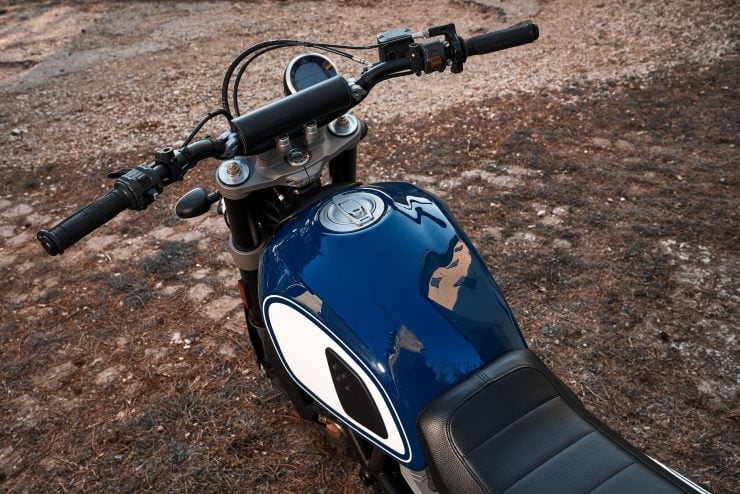 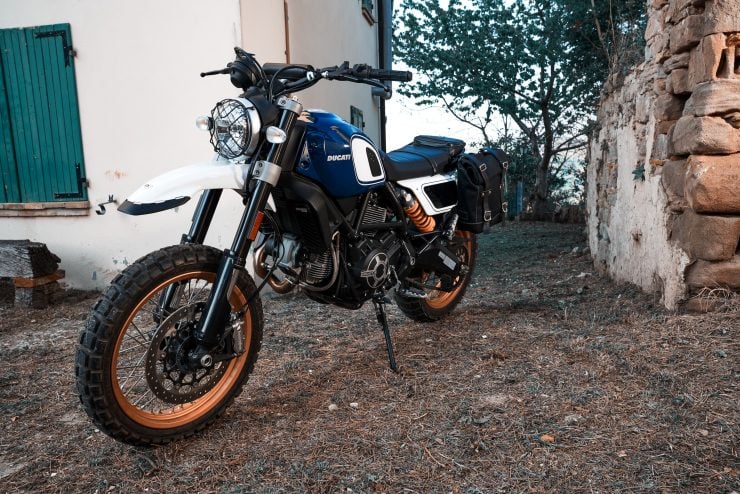 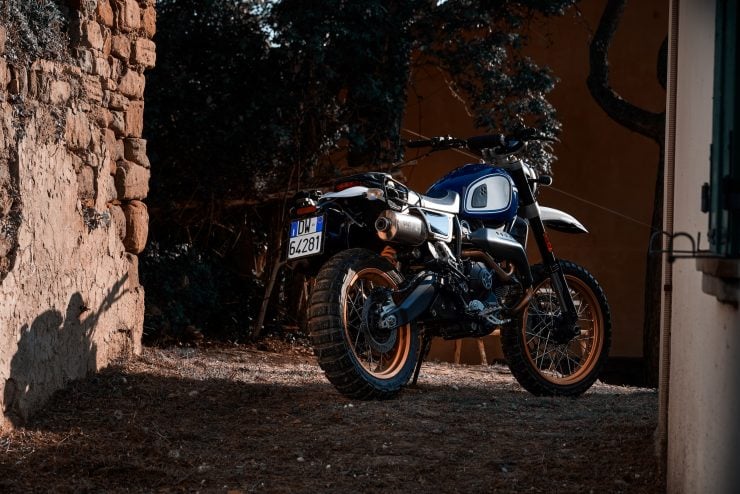 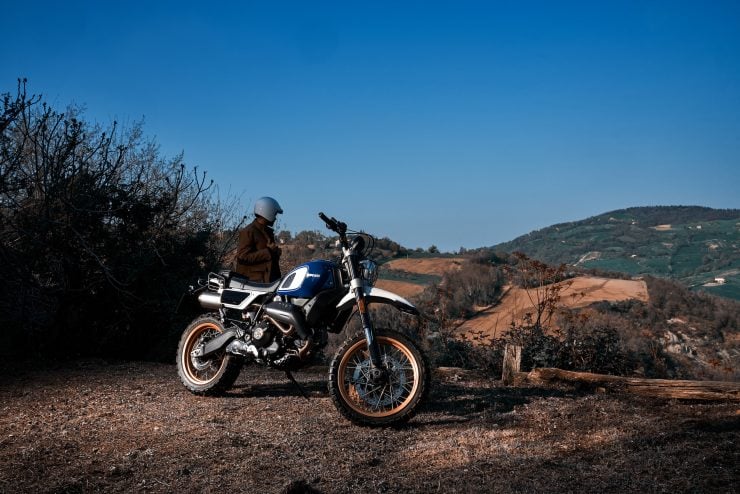 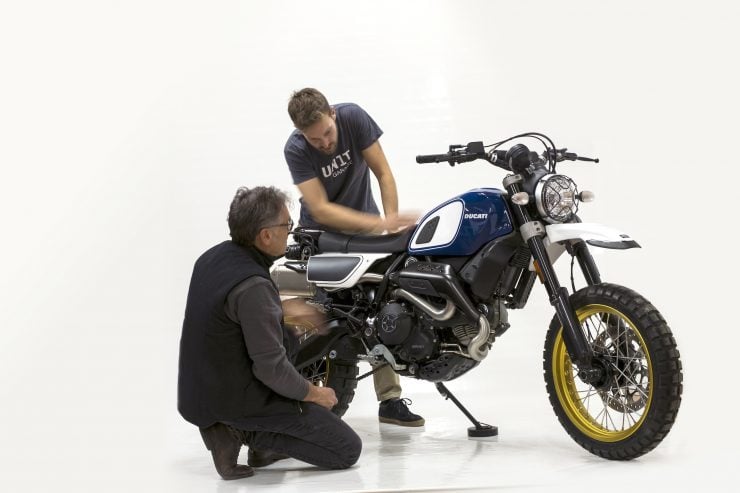 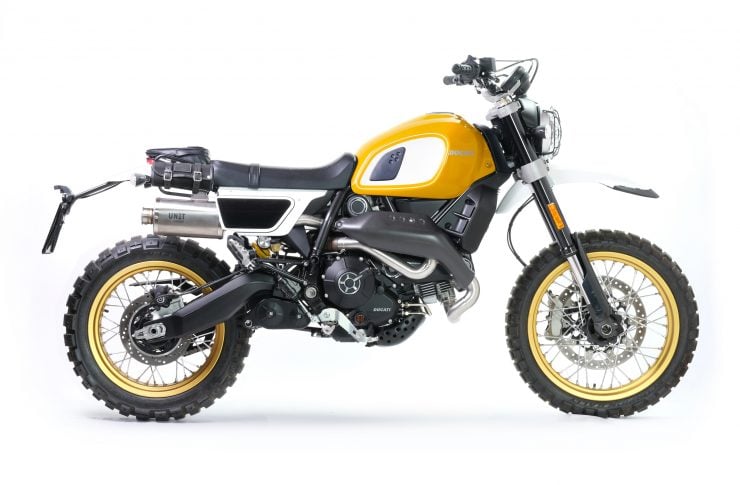 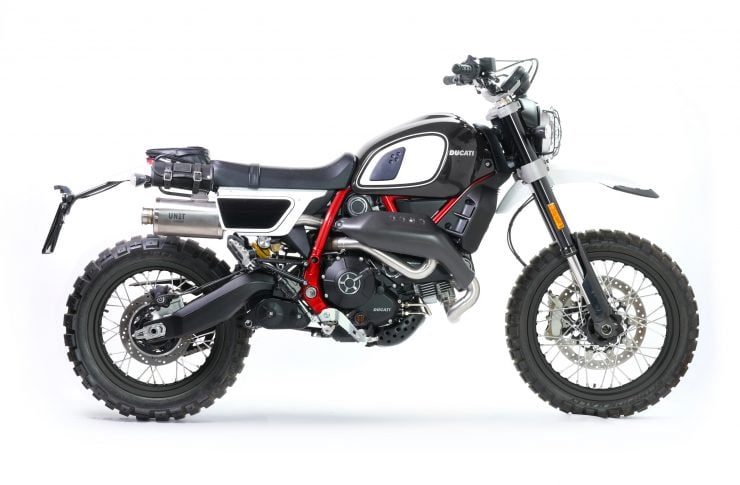 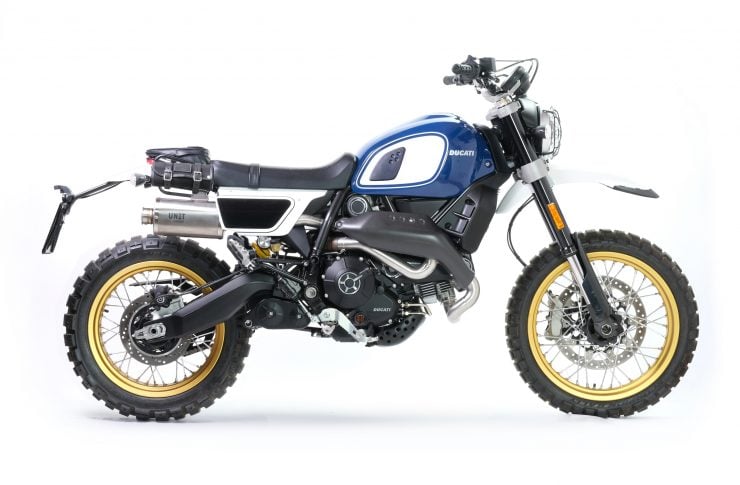 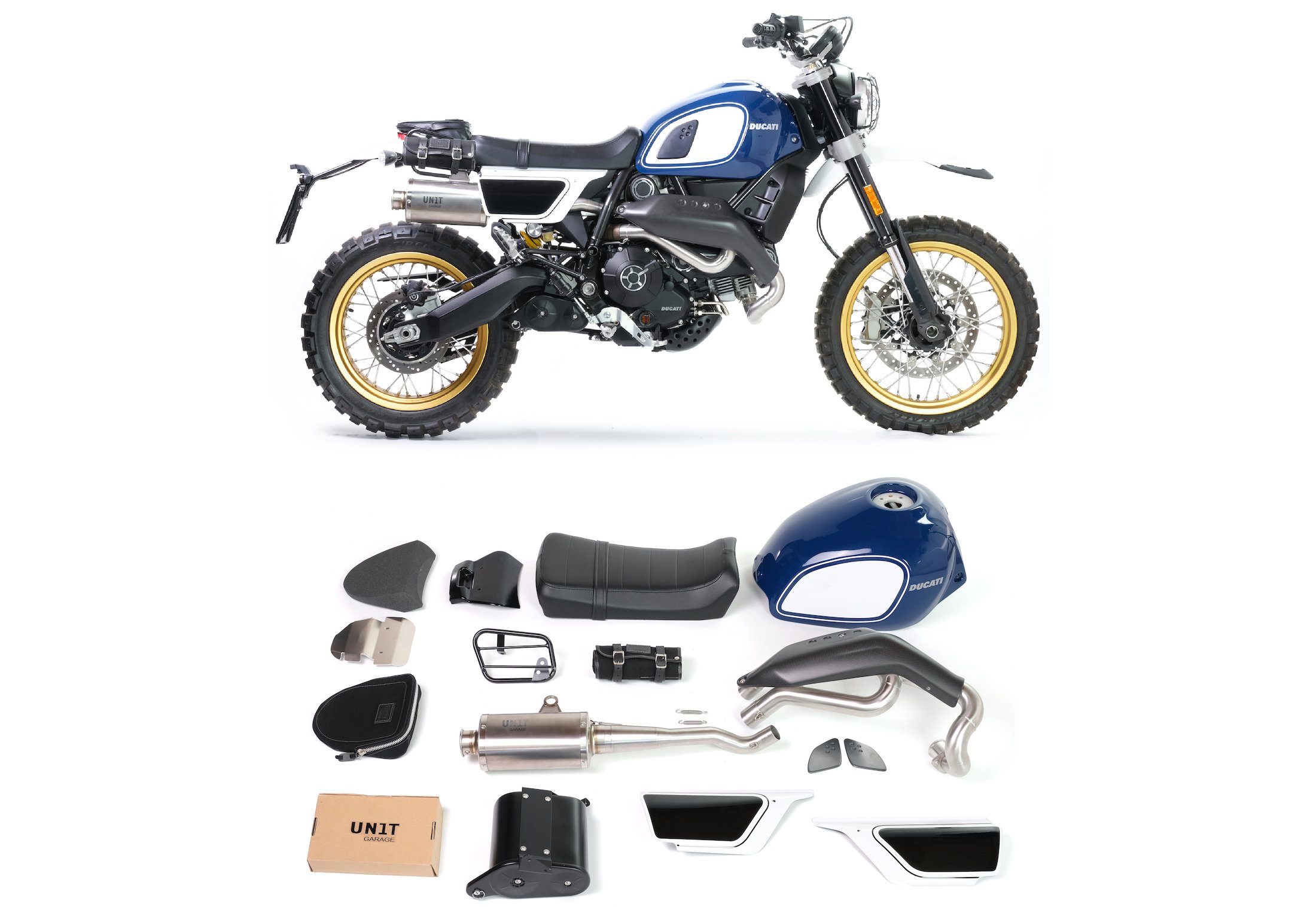