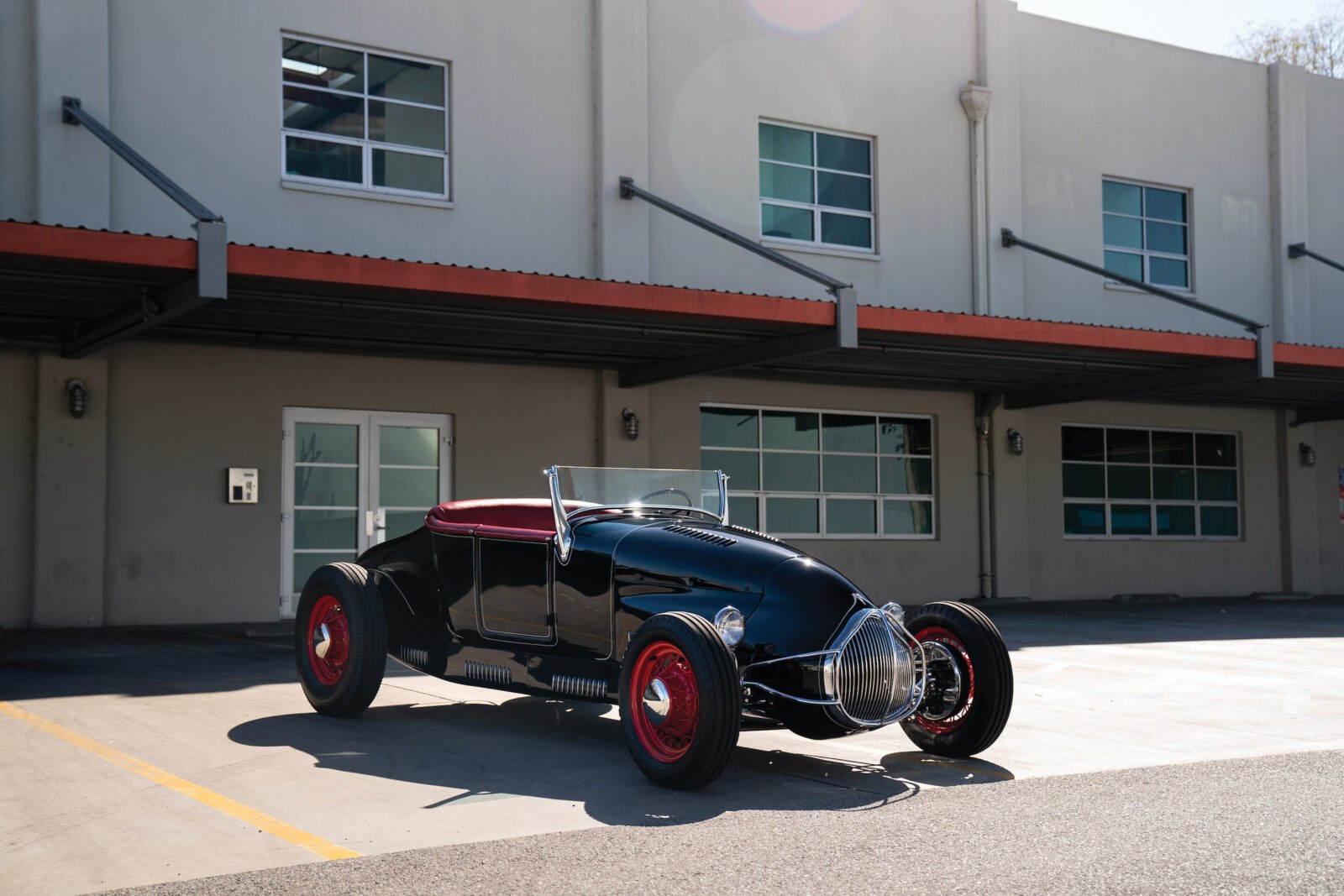 This Ford Model T Track-Nose is one of the most well-known hot rods of its era, it was built by Jack Thompson with help from Claude Hampson, and it appeared in the August 1958 issue of Hot Rod Magazine.

Jack Thompson set about building the car in the mid-1950s, the project would take him 2 and a half years to complete. It’s unlikely that when building it he ever dreamed that we’d still be photographing and talking about his hot rod 70 years later. 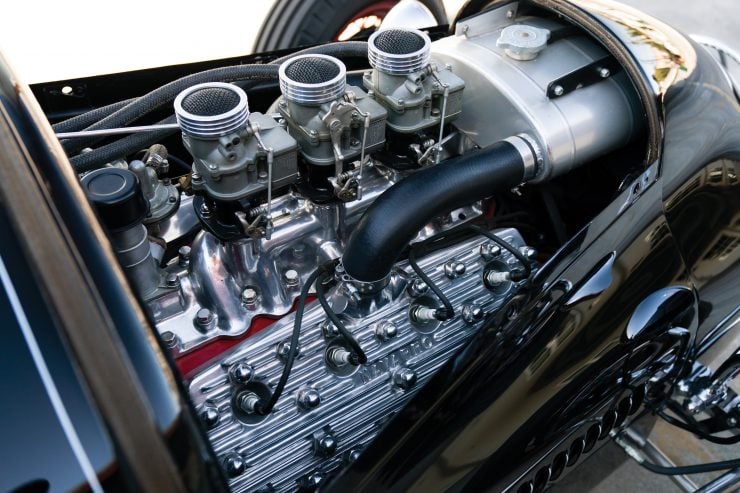 The build started with a 1927 Ford Model T, a box section frame from a 1923 Essex, and a Ford Flathead V8. Tantalizingly the original Hot Rod Magazine article says the following about the engine:

“Engine is from war surplus Japanese tank, was built by Ford with an extra thick core allowing big bores. Heads are Navarro, sit above a 3-7/16-inch bore and 3-7/16 stroke. An original Smith 272 grind passes fuel from the Edelbrock manifold through smooth ports to the relieved block.”

Exactly what they mean about the engine being from a Japanese tank is hard to fathom as it’s a Ford Flathead V8 and these were never used in Japanese tanks to the best of our knowledge (though if you can shed any light on this please send us a message from our contact page).

Note: We received a message from Kevin H. in New Zealand with a possible clue:

“Just a thought from left field concerning the flathead v8 from a ‘Japanese’ tank story in the ‘27 track nose hot rod. Also serving in the Pacific with Commonwealth forces were thousands of Bren Carriers. These light semi-armoured vehicles carried gear, weapons and supplies for infantry units. They look not unlike some of the small Japanese AFVs and were powered by the Ford flathead.”

The Navarro heads and Smith 272 cams were popular tuning parts back in the golden age of the hot rod, and the Thompson Track-Nose also benefits from triple Stromberg 97 carburetors with wire mesh in place of a filter. 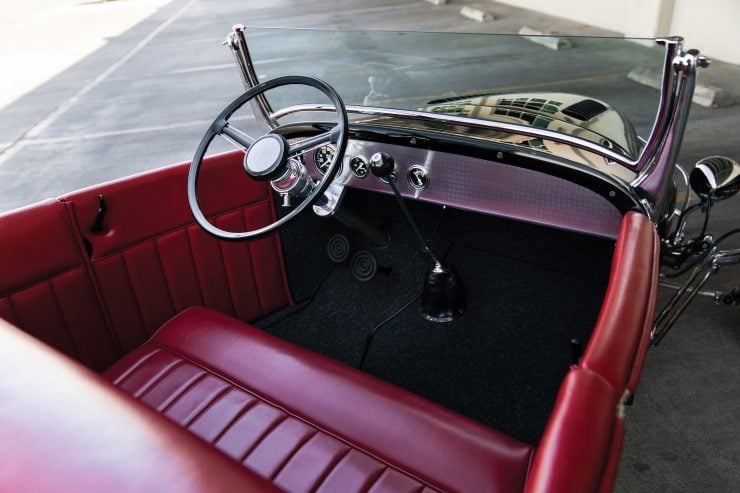 The small nose made the radiator choice a challenge, Thompson settled on using a 1937 Lincoln radiator that had been cut 4″, then mounted at a 45 degree angle and topped with a high point header tank. A 3-speed 1939 Ford transmission was fitted with a curved floor shifter, it’s fitted with a 1942 Lincoln-Zephyr close-ratio 1st and 2nd gears.

Claude Hampson (of Kurtis-Kraft Racing fame) custom-built the track nose for this car, he also fabricated the belly pan and the protective front and rear nerf bars. Hampson was nothing if not multitalented, and he also took care of the paint job with a gleaming jet black finish. The pin striping was done by Art Summers and Tony Nancy did the upholstery.

The cockpit is a showcase in minimalism, with a banjo steering wheel from a Porsche 356 and a full set of Stewart-Warner gauges on an engine-turned dash panel. 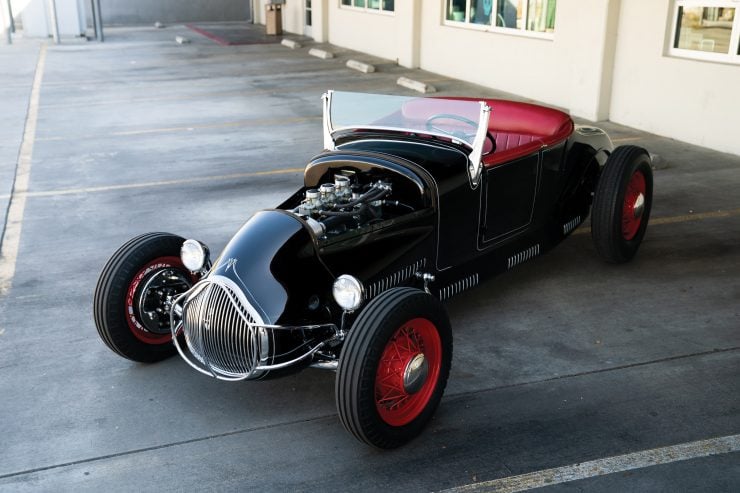 In the 1990s the Thompson Track T needed a restoration, it was undertaken by  Gary Schroeder (of Schroeder Steering fame) and Rick Cresse (Tri-C Engineering) who did a remarkable job of keeping it original. The pinstriping was redone by Tom “Itchy” Otis who used images of the original car to get an exact match.

Since its restoration the car has won the Bruce Meyer Preservation Perpetual Trophy, the “Von Dutch” Award for the best pinstriping, and the trophy for the Best Altered T at the Grand National Roadster Show in 1997. The car also took part in the first Historic Hot Rod Class at the Pebble Beach Concours d’Elegance in 1997, and it would later win the “Excellence in Design” Award in 2007 at the Art Center School of Design show in Pasadena.

Very few original hot rods have survived from the mid-20th century, many were crashed, scrapped, or stripped for parts. Even fewer original track-nose rods made it to the current day, making the Thompson car quite a rarity.

RM Sotheby’s will be offering the Jack Thompson Track-Nose for sale on December the 8th at The Petersen Automotive Museum Auction. The estimated hammer price is $100,000 to $130,000 USD and you can click here to visit the listing if you’d like to read more or register to bid. 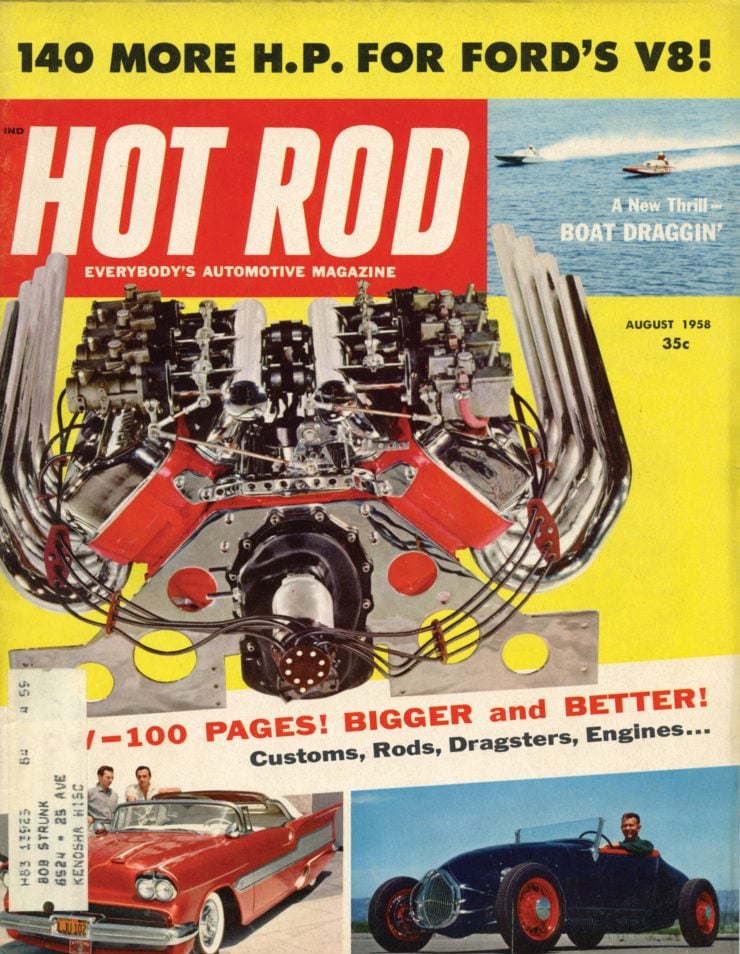 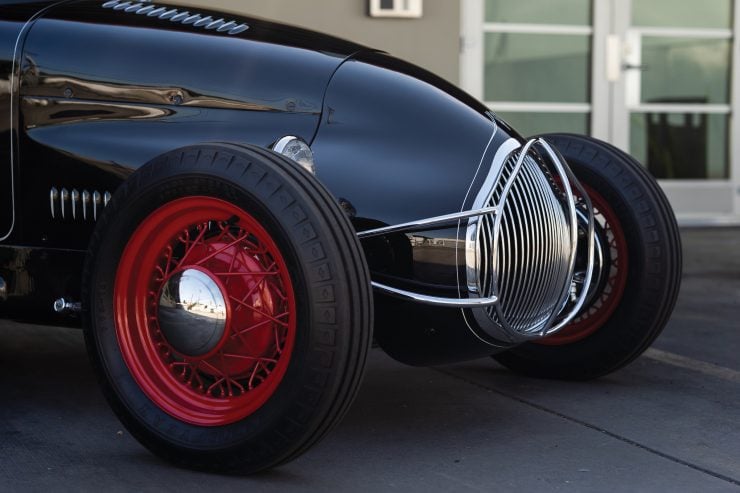 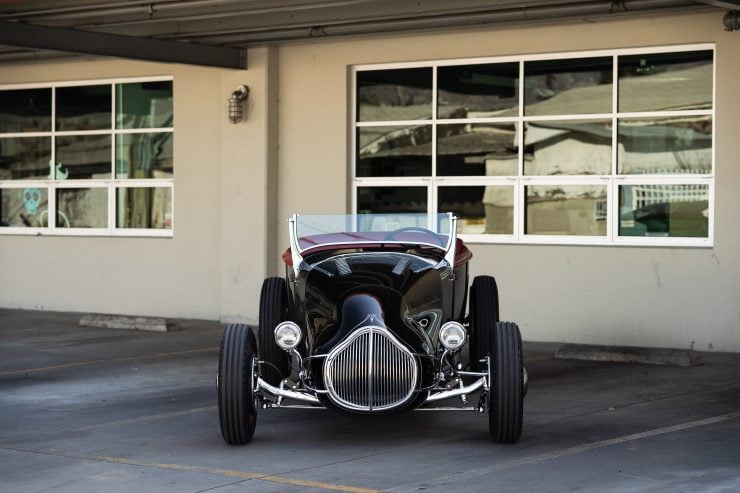 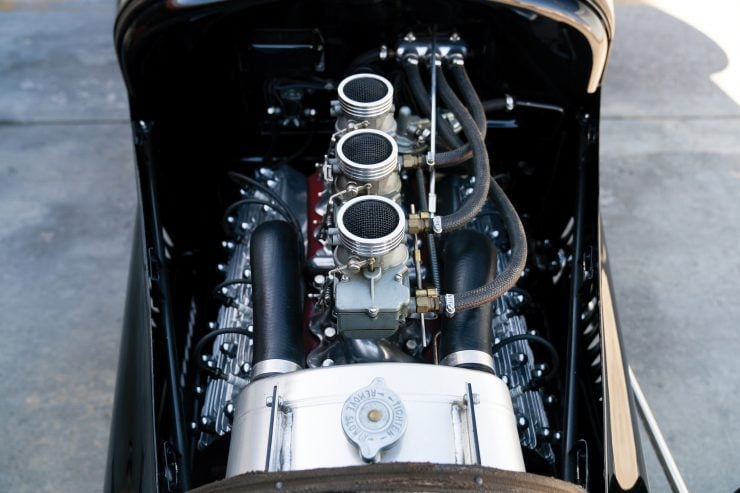 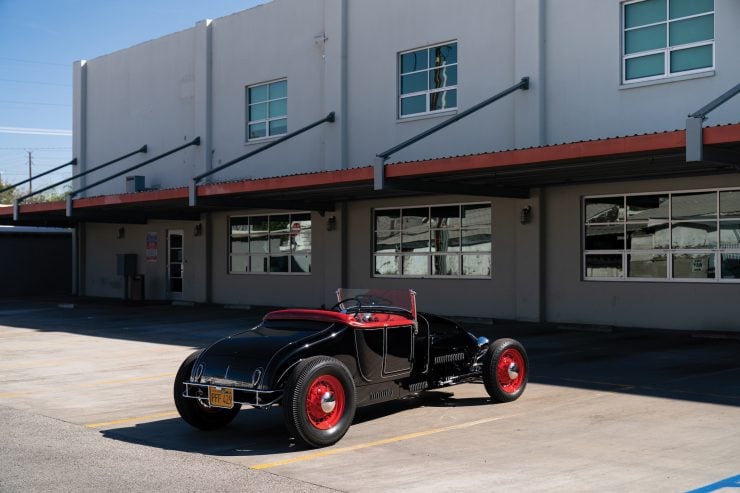 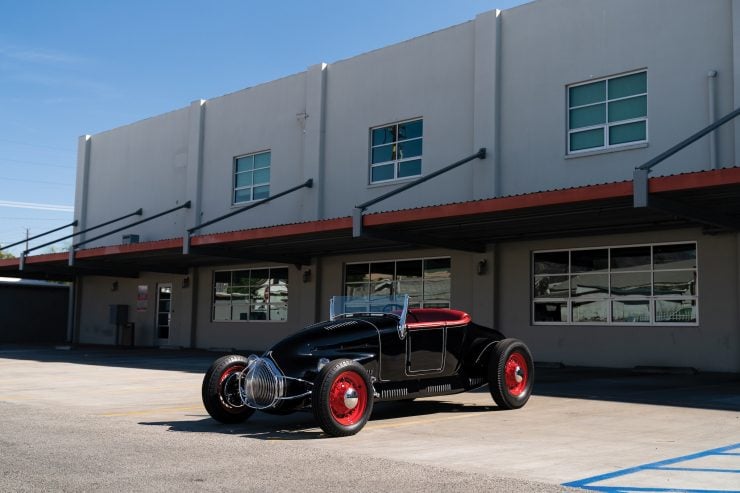 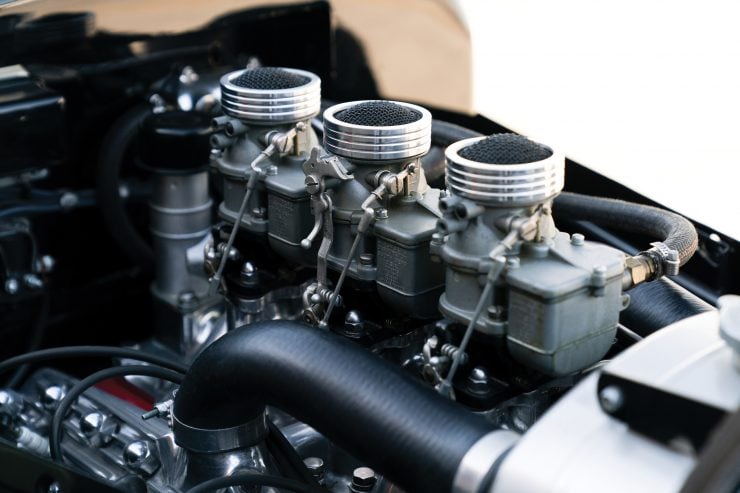 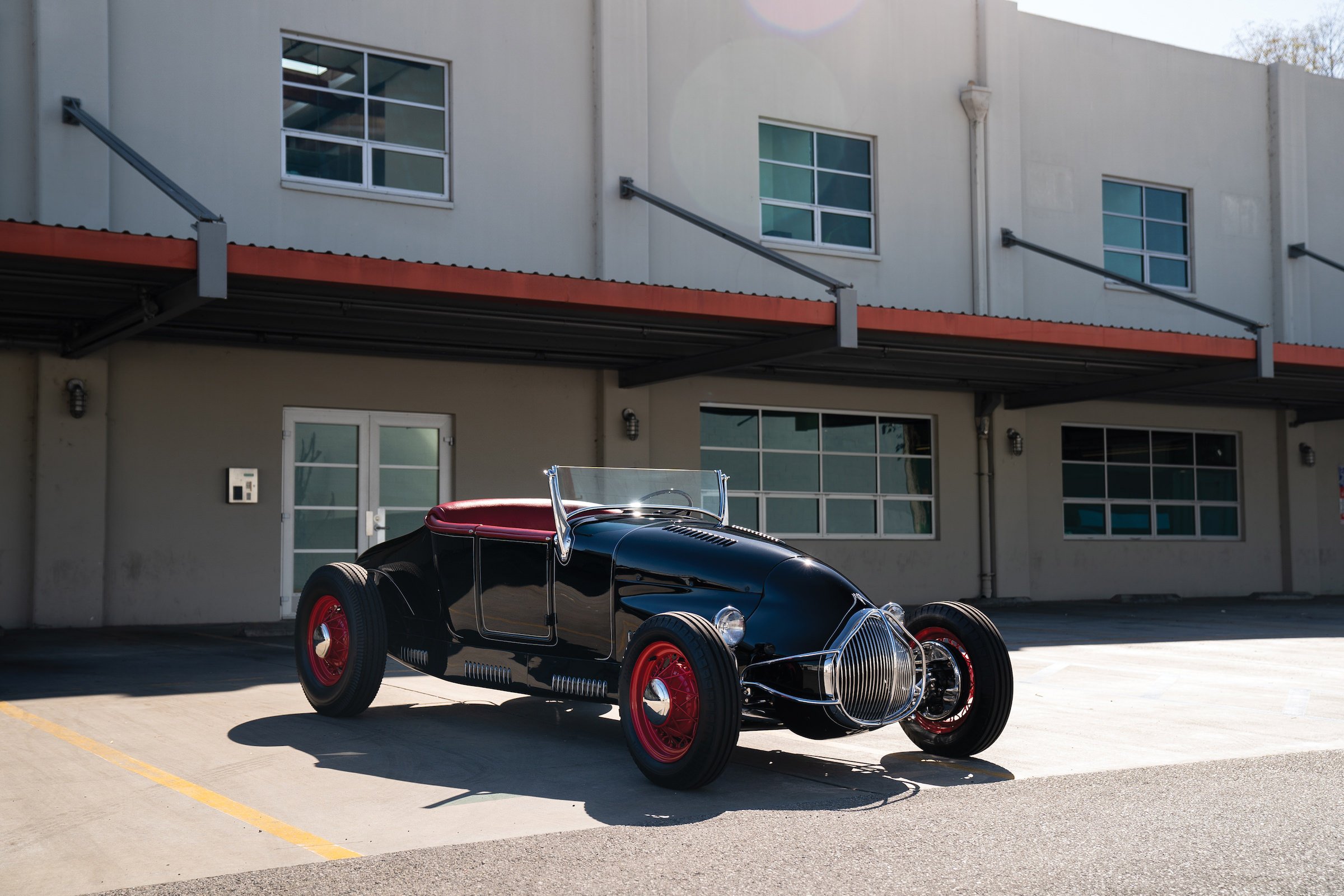