With its long side strakes covering the large air vent on each side of the car, and wedge-shaped profile, the Testarossa was a unique Ferrari. Its low, sleek wedge shape helped it look like it was doing 200 mph standing still. It’s no surprise that it became a major cultural icon of the 1980s.

The Sultan of Brunei decided that he wanted a convertible Spider version for his private car collection, and so commission Italian design house Pininfarina to create one for him. The Sultan of Brunei was so impressed with it he was reported to have had not just one but seven of these Testarossa spiders made, each in a different color – presumably to help tell them apart.

The Testarossa: An 80s Icon

The Ferrari Testarossa was the successor to the Ferrari Berlinetta Boxer, it was a bold statement for a new decade and it became the Italian company’s best selling car. There can be no doubt that it was one of the most eye-catching automotive designs of its time, and a credit to Leonardo Fioravanti who styled it.

This was a car that combined the best of aerodynamic practical design with aesthetics guaranteed to turn heads and attract crowds.

The Testarossa was only made as a coupé with just one convertible spider made by Ferrari’s Maranello factory for the Boss of Fiat, Gianni Agnelli. This car was painted in an “Argento Nürburgring”  silver exterior, black leather interior with a blue stripe running above the matte black sills and the window/windscreen base line.

The Ferrari Testarossa Spider with the soft top raised, giving it a notably shorter roofline than the tin top version.

The genesis of what would lead to the Testarossa began with Ferrari gingerly testing the idea of a mid-rear-engine production road car with the creation of the Dino, which was powered by a 2.0 litre V6 mounted as a transverse mid-engine.

The Dino appeared in 1967 and did not actually wear the Ferrari name. It appeared two years after Lamborghini had introduced the idea of a transverse mid-rear-engine GT car with the rolling chassis that would become the Miura shown at the 1965 Turin Auto Show, and they had been surprised at the number of orders they received for the car which did not yet have a body designed for it.

The success of the Lamborghini Miura and the success of the Dino, seems to have persuaded Ferrari to create a mid-engine GT that bore the Ferrari name. This new car was to be created learning the lessons from the Dino and the Miura and applying them to produce a superior car.

The car was not to have a transverse mounted rear-mid-engine but instead have the engine installed longitudinally. Added to that the car was to have a flat 12 engine rather than a V12 to lower its centre of gravity and optimize its roll resistance.

The technical director of Ferrari’s racing department, engineer Mauro Forghieri, had previously designed a 1.5 litre flat 12 engine for racing and this had been used in the 1964 512 F1.

This was overseen by Ferrari engineers Giuliano de Angelis and Angelo Bellei and led to the DOHC engine used in the Ferrari Boxer, and then the double valve (four valves per cylinder) DOHC flat 12 of the Testarossa. 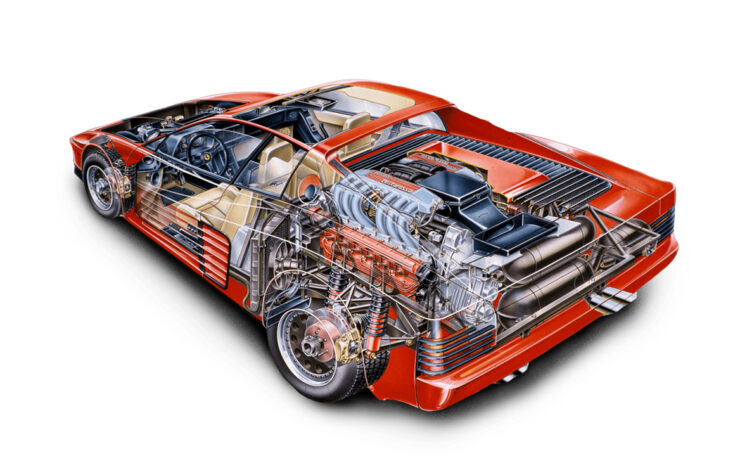 The car was fitted with a 5 speed manual transmission operated by a centre mounted gearlever with traditional Ferrari gate.

In its foundational beginnings the Testarossa was created from race-proven design principles from the engine at its heart, its transaxle, chassis, brakes and suspension, as one would expect a Ferrari to be.

The Testarossa Spider rear view with the top down.

The Testarossa was a highly desirable car and there were quite a number of people who requested that Ferrari make a convertible Spider version for them.

But these folks were destined to be disappointed. Ferrari’s engineers argued that the  space frame chassis needed the reinforcing of the roof to ensure the structural integrity and stiffness of the car: to remove the roof would necessitate building in the required reinforcing which would make the car heavier and thus slower.

Some of those customers were not inclined to get used to the disappointment of not being able to get the car they wanted, and so like the Sultan of Brunei, they went to independent body experts such as Pininfarina, Straman, Pavesi, Lorentz, Rankl, and Koenig Specials. So if you come across a Testarossa Spider it will most likely be one of these, except for the Gianni Agnelli car of course.

This car is believed to be one of seven special Testarossas custom made by Pininfarina for the Sultan of Brunei.

It has been in static display since it was purchased and has a mere 413 kilometres on the odometer at the time it was catalogued by RM Sotheby’s ready for its inclusion in their London sale to be held on 5th November 2022.

The car was taken out of static display in Novamber 2021 to be prepared for sale. This work was done by Carrozzeria Zanasi, who are the Maranello-based specialist used by the Ferrari factory for paint and finishing work for all the supercars they produce. It was also subjected to mechanical preparation and re-commissioning to bring it back to almost as-new condition.

This car is now fully ready for sale and you will find its sale page with further details here.