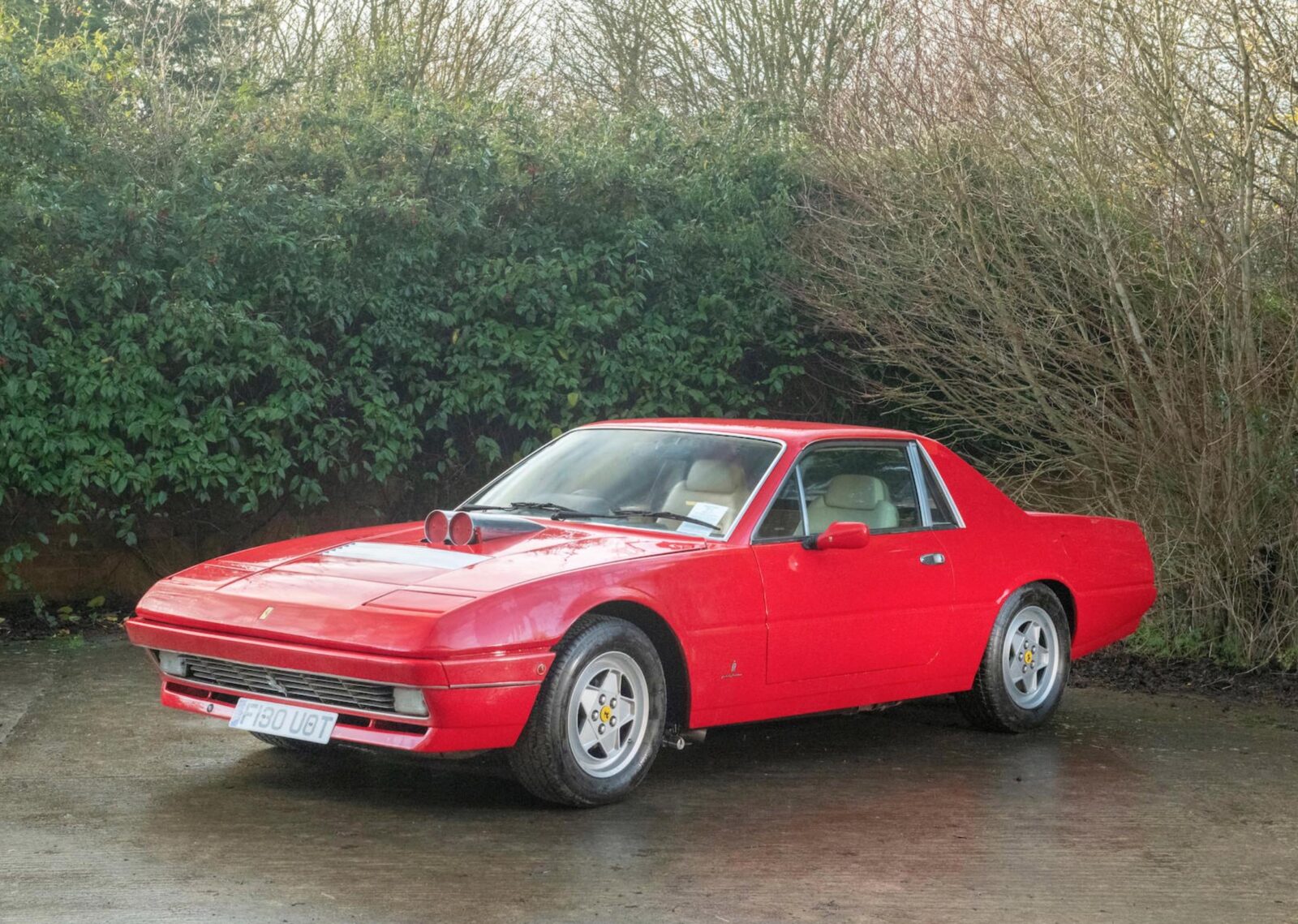 Of course it’s always worth remembering the old adage about there being nothing more expensive than a cheap Ferrari – because of the blinding maintenance and servicing costs. However Elo and Will has largely solved this problem for the next owner by removing the Ferrari V12 and installing a 5.7 litre Chevy V8.

Now usually if you remove a V12 from a Ferrari and install and American V8 you can expect two find yourself hung, drawn, and quartered by members of the local Ferrari club. In this instance you might just escape that fate as the Ferrari 412 is typically considered one of the least-liked Ferraris of its time. 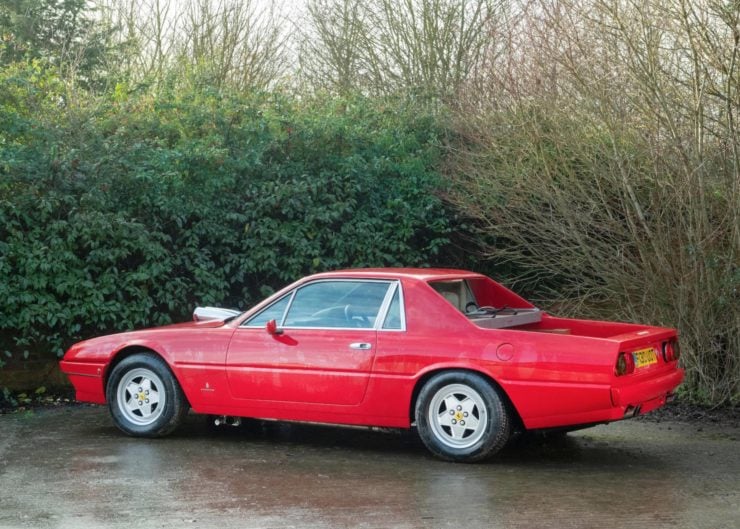 Above Image: The lines of the car have been preserved remarkably well given the unusual nature of the conversion.

The car was styled by Leonardo Fioravanti at Pininfarina and although it was always controversial it must be said the it did age well in the view of many – it didn’t look a whisker out of place in 1989 a full 17 years after it had first been unveiled.

The Ferrari 412 was fitted with a 4.9 litre version of the legendary Colombo V12, with double overhead cams per bank and four valves per cylinder, it was good for 335 bhp at 6,000 rpm.

Just 576 examples of the 412 were made and surviving examples haven’t come close to approaching the value of its predecessor the Ferrari 365 GT 2+2. Although it’ll never be universally loved the 412 and its siblings have been slowly gaining in popularity in recent years.

You may recognize the car if you’re a regular watcher of the History Channel series “Ultimate Wheels” as the Ferrari 412 pick-up was the star of one of the show’s episodes. 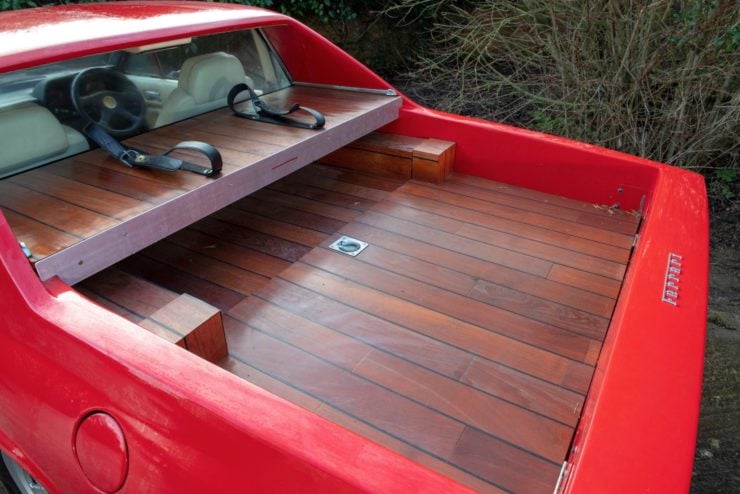 Above Image: The load-bay is four and a half feet long with teak panelling.

The build started when Will bought a standard 1985 Ferrari 412 for £5,000, or about $6,700 USD. That’s obviously not a lot of money even for a 412 however the engine gremlins you may expect were all largely a moot point as the Colombo V12 was coming out early in the build and never going back in.

The decision to use the 5.7 litre Chevrolet V8 wasn’t a difficult one, it would be an order of magnitude cheaper to maintain and if future owners so wished it would be easy to add performance upgrades to match or surpass the Ferrari engine’s power output.

In order to convert the 412 to a pick-up Will and Elo cut 300mm out of the roof and modified the B-pillars to match. This left room for a four and a half foot load bed in the rear – in place of the original back seats and trunk.

The hood has been modified with a double-barreled intake for the V8, which is sure to rustle some jimmies in the Ferrari purist community. 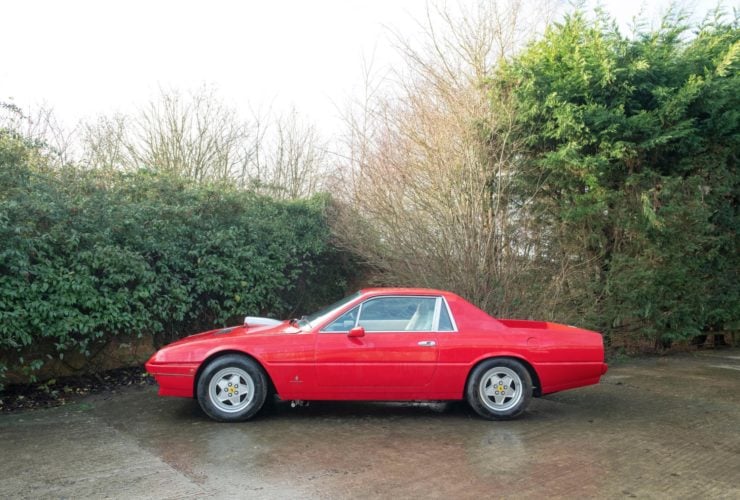 Above Image: Although it’ll doubtless upset Ferrari purists, the car looks like quite a fun daily driver.

Teak wood panelling was used in the load bed, inspiration had been taken from luxury yachts and teak has natural anti-rot tendencies which make it ideal. In order to keep the distinctive rear of the car in place they decided to forego a fold down tailgate, though due to the fact that the car is reasonably low it’s not particularly difficult to lift items over the side.

Inside the car you’ll find two bucket seats, the interior is mostly standard apart from the steering wheel and stereo, even the original transmission location has been kept.

After it was built the Ferrari pick-up spent most of its time in the London Motor Museum. It now needs a recommissioning before any driving is attempted, and the price estimate is a reasonably affordable £15,000 to £20,000 ($20,250 to $27,000 USD) as mentioned above.

If you’d like to see more or register to bid you can click here to visit the listing on Bonhams, it’s due to roll across the auction block on the 20th of March in England. 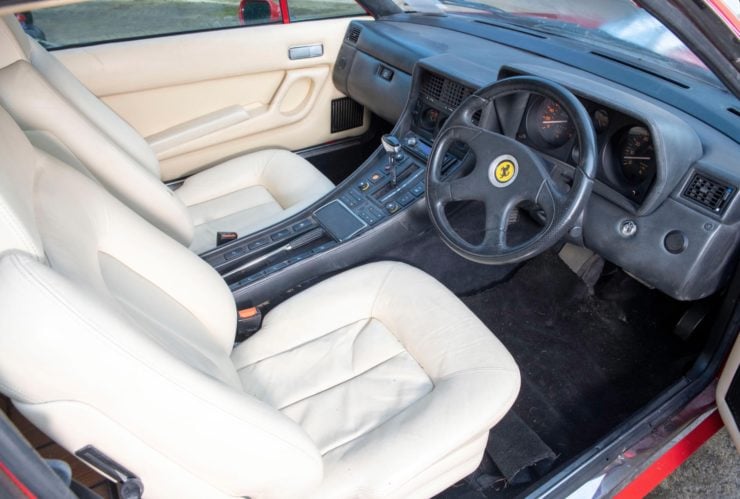 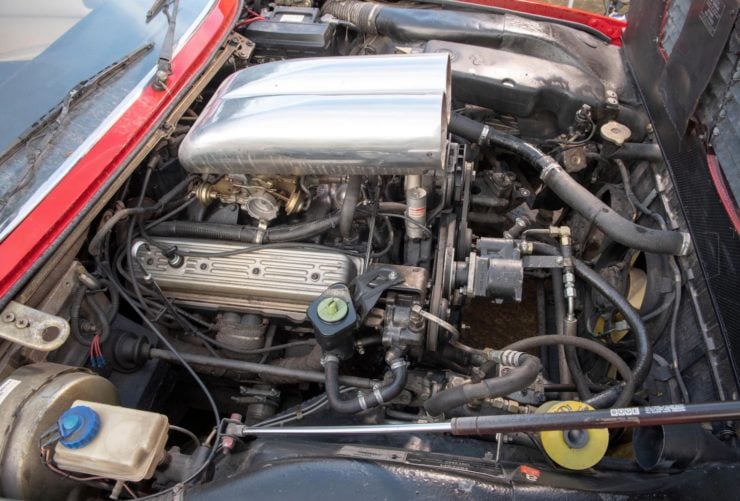 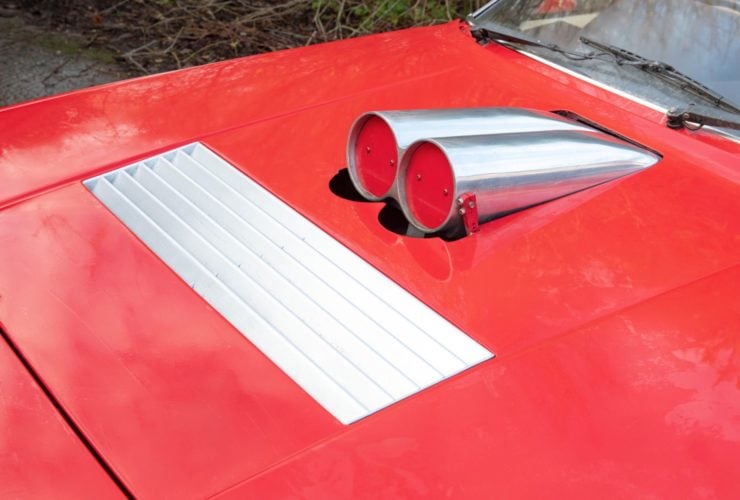 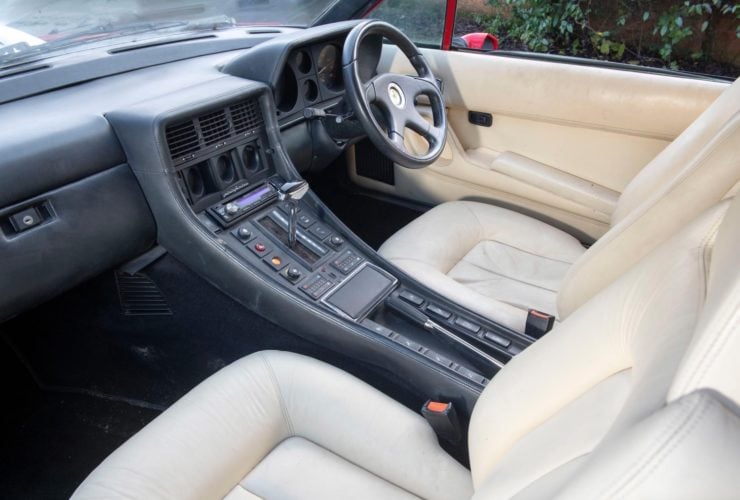 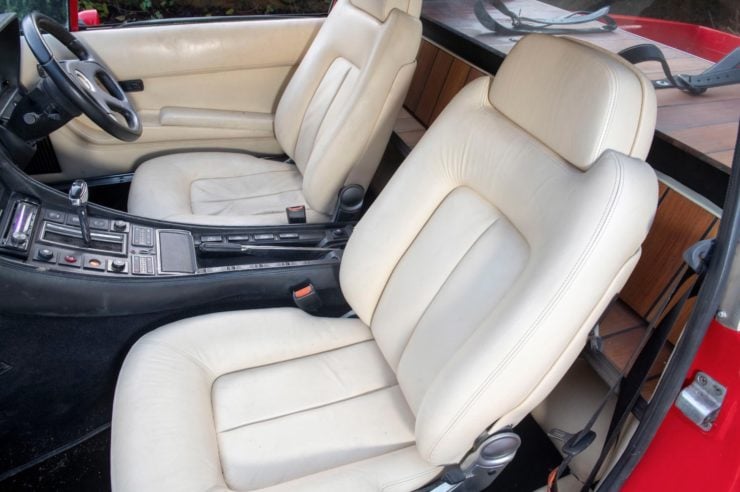 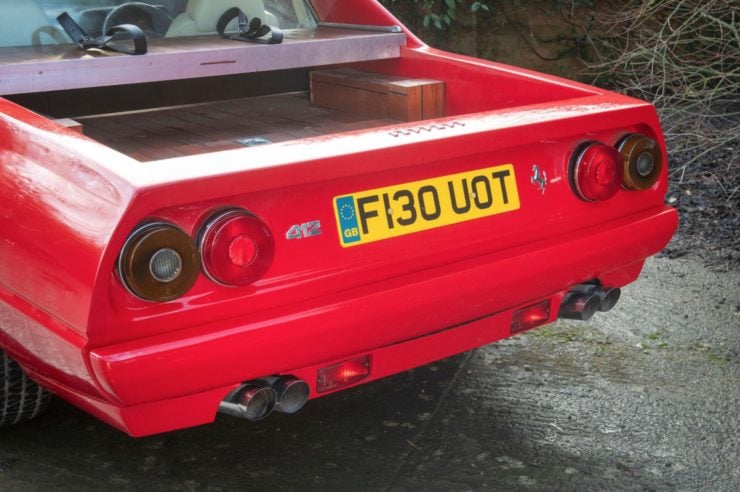 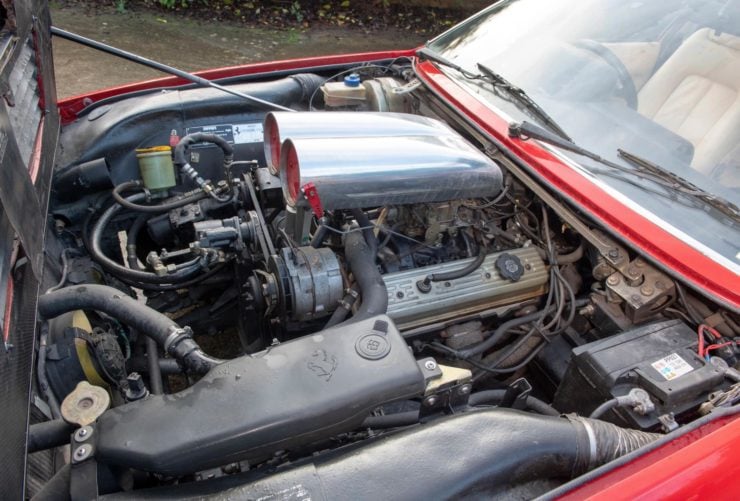 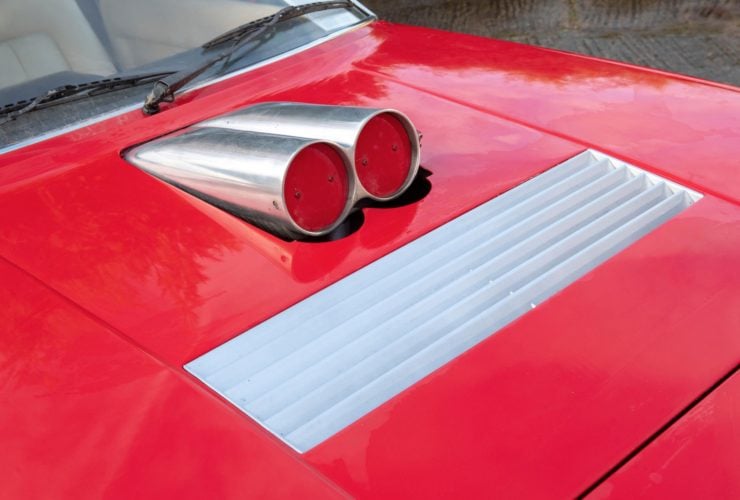