The Engine Designs of Von Dutch 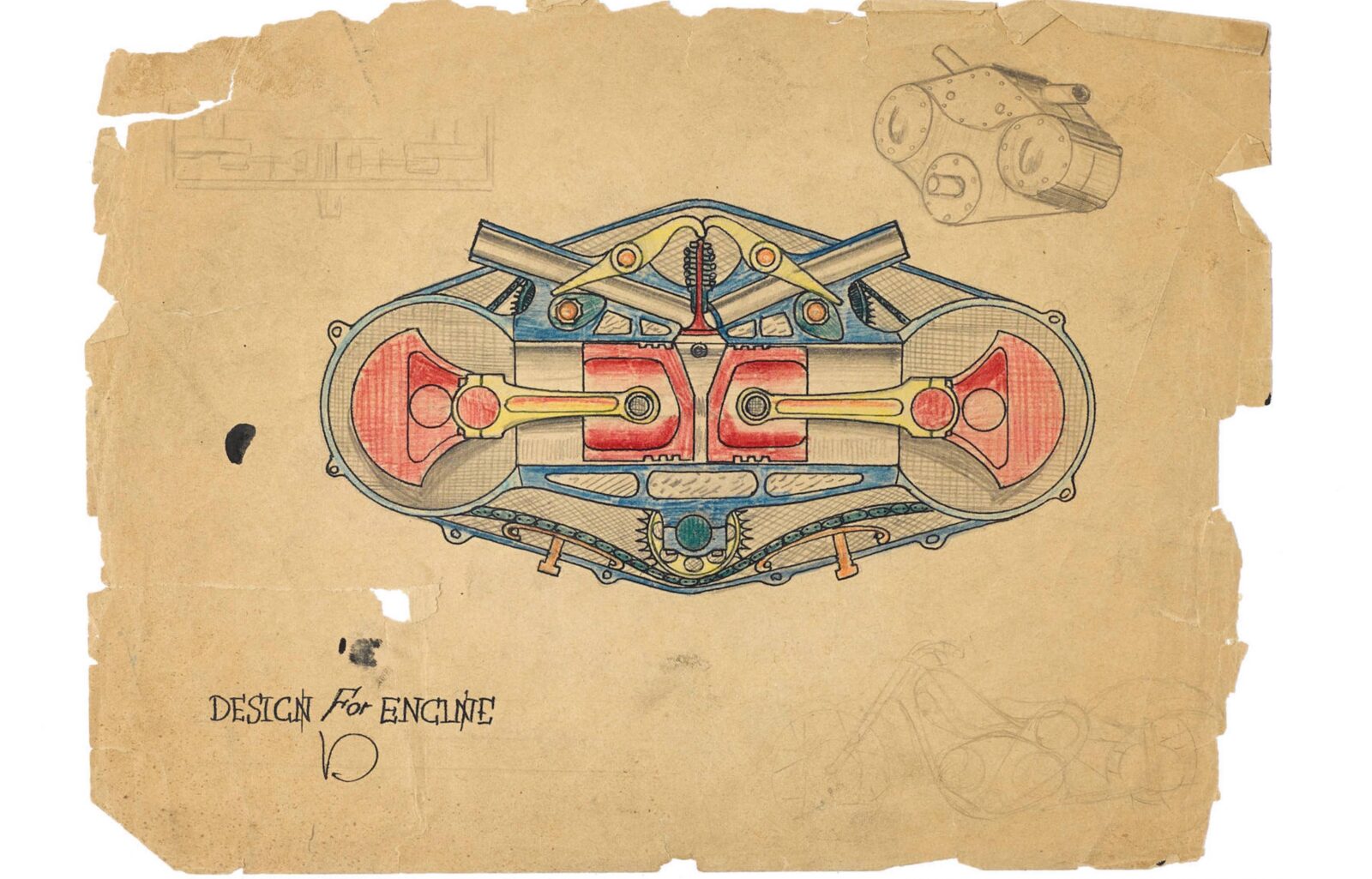 Von Dutch, aka Kenny Howard, was a prolific artist, a self-taught engineer, and a founding father of the Californian Kustom Kulture movement of ’50s and ’60s.

Kenny was called “Dutchman” from a young age by family members, who reportedly told him he was “as stubborn as a Dutchman” – he would later add the “von” prefix himself as an artistic measure to differentiate himself from natives of the Netherlands.

From the age of 10 Von Dutch was able to paint and letter at a professional level, thanks to his father who was a well-known sign painter in California. He would rise to fame due to his remarkable pin striping abilities, perhaps most famously on the “Blue Velvet” Pontiac Firebird in 1979 – he painted two perfectly parallel (to the human eye) 16.5 foot stripes down each side freehand.

When not painting, Von Dutch was fascinated with knife making, gun smithing, and engine design. This series of drawings are designs from his hand, mostly penned in the 1950s. They’re obviously not production-ready blueprints, but seem to be intended more as experiments and the fleshing out of ideas.

It’s not known if he ever intended to get any of his engines made, or if they were just exercises in design. Either way they make interesting viewing, particularly the opposed piston engine above, in more recent years there have been experimental engines very similar to it that have garnered significant interest from investors.

Each of these drawings is available for sale individually, they’re due to be offered by Bonhams at the Las Vegas Motorcycle Auction on the 25th of January. Pricing estimates vary from $400 to $750 USD each, making them quite affordable even in our blue-collar end of the art collecting world.

⤉ The Engine Above – ‘Design for Engine’ 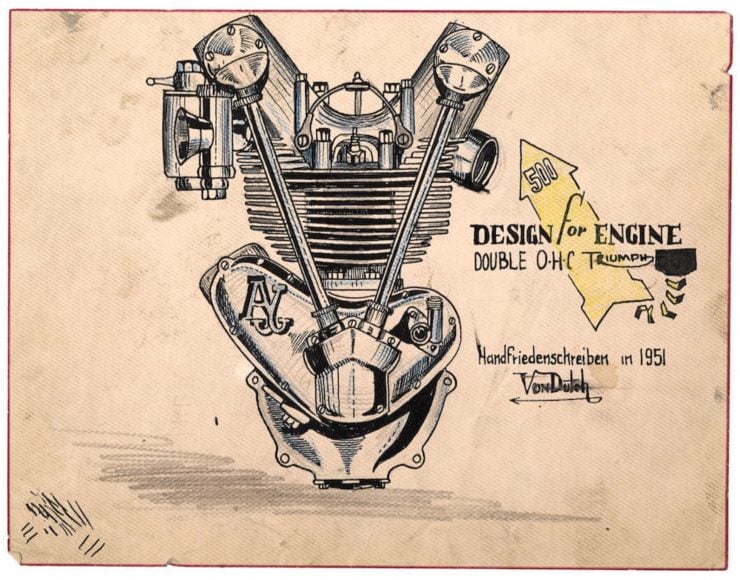 Pencil on paper with colored pencil incorporated, with some folds and slight losses of paper, sketch of a Triumph DOHC engine, signed Von Dutch, 6″ x 8″. 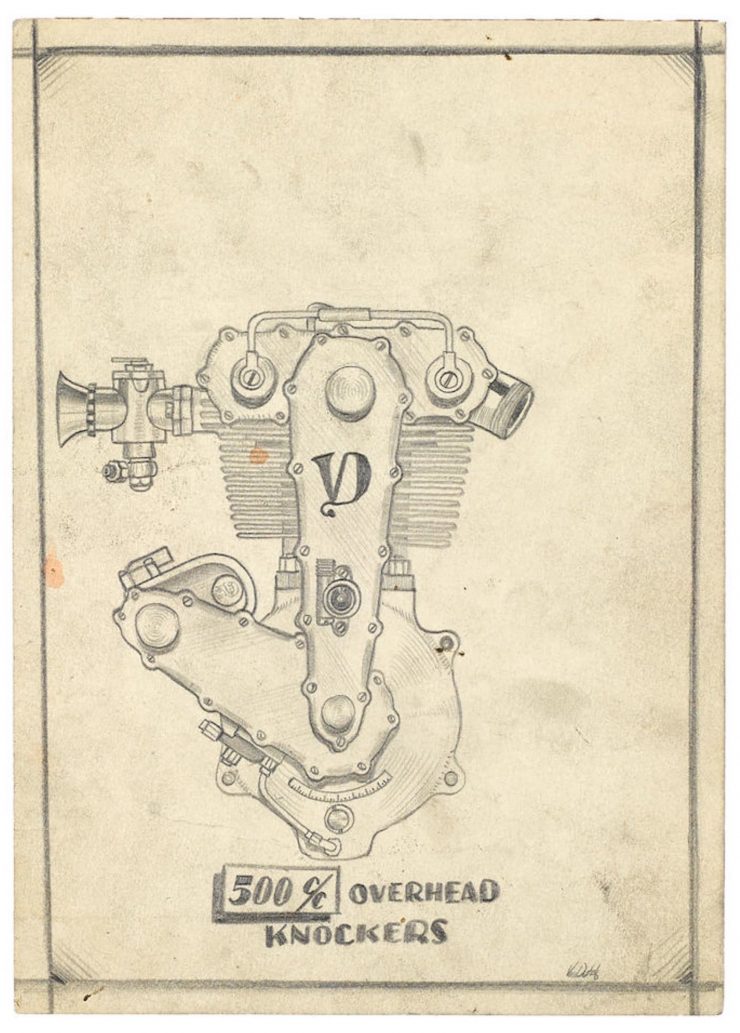 Pencil on paper of an engine design with the Von Dutch logo on the timing cover, signed Von Dutch to lower right-hand corner, 5″ x 7.5″. 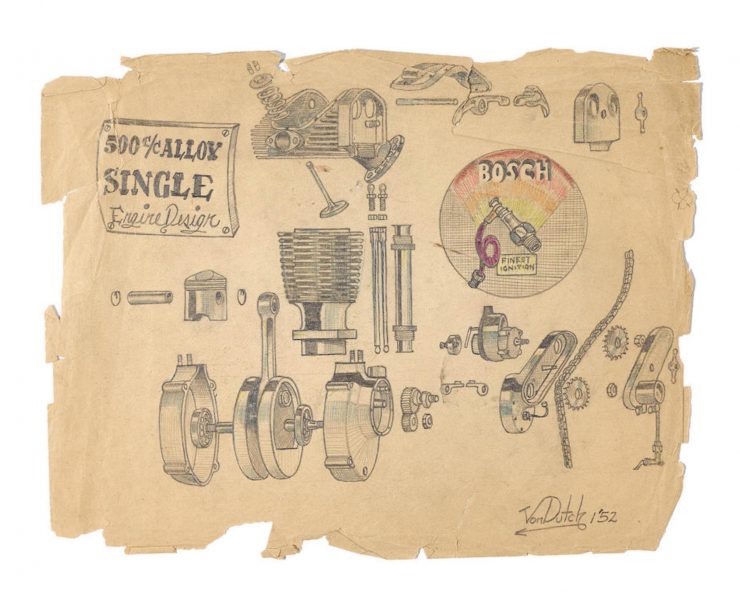 Pencil on paper with colored pencil incorporated, with tears and losses to the paper, sketch of a single cylinder engine design, signed Von Dutch 1’52, 8.5″ x 11″. 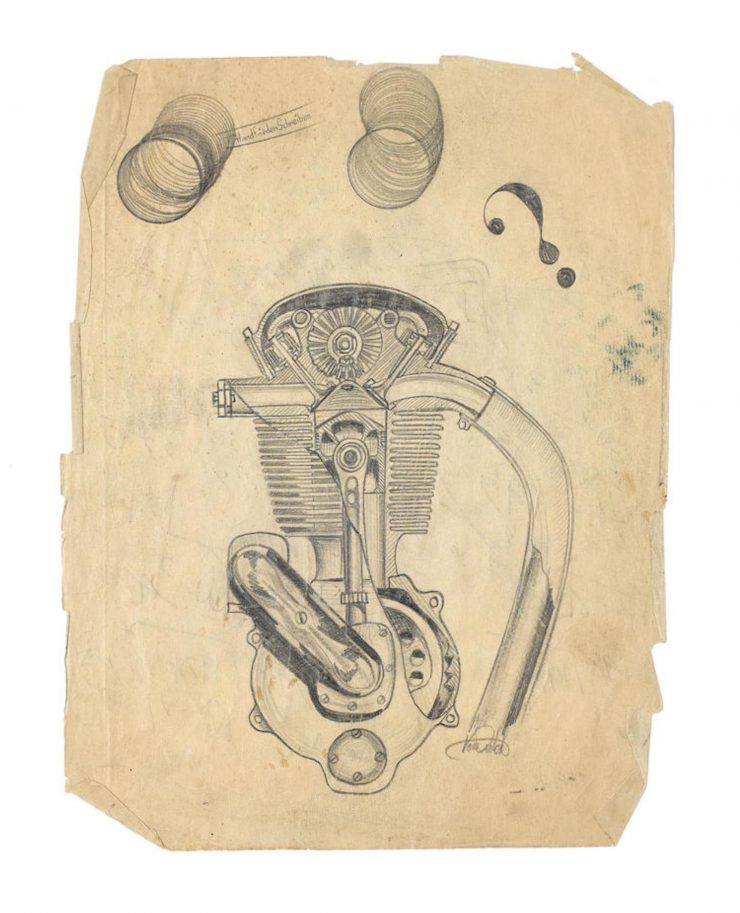 Pencil on paper, with tears and losses to the paper, sketch of an engine design with drawn question mark in top right hand corner, signed Von Dutch, 8.5″ x 11″. 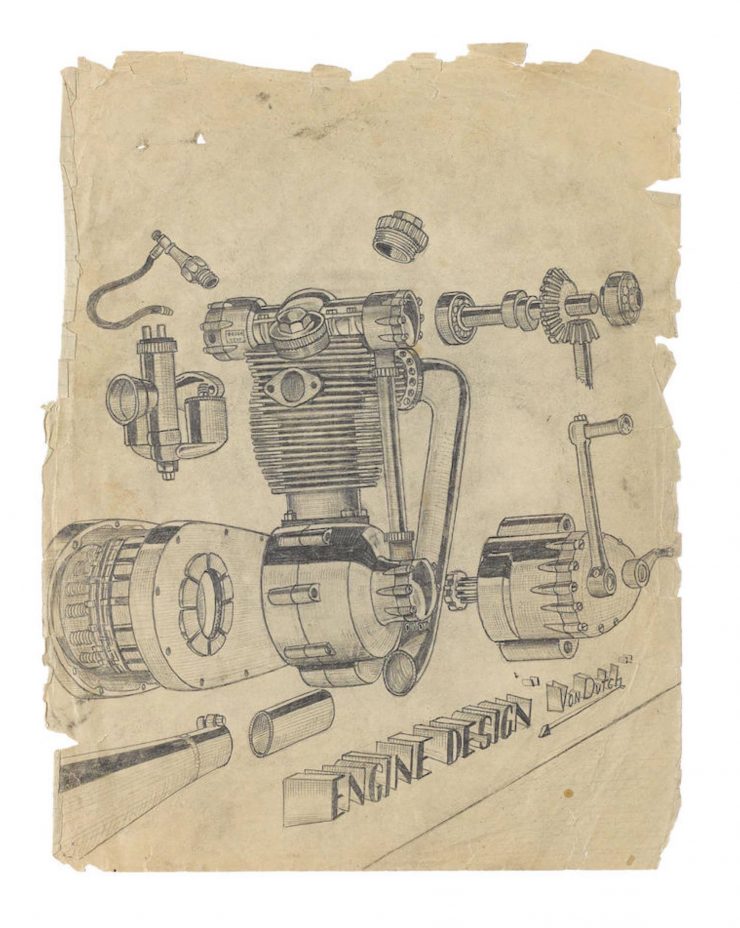 Pencil on paper, with tears and losses to paper, sketch of an engine, gearbox and clutch design, signed Von Dutch, 8.5″ x 11″. 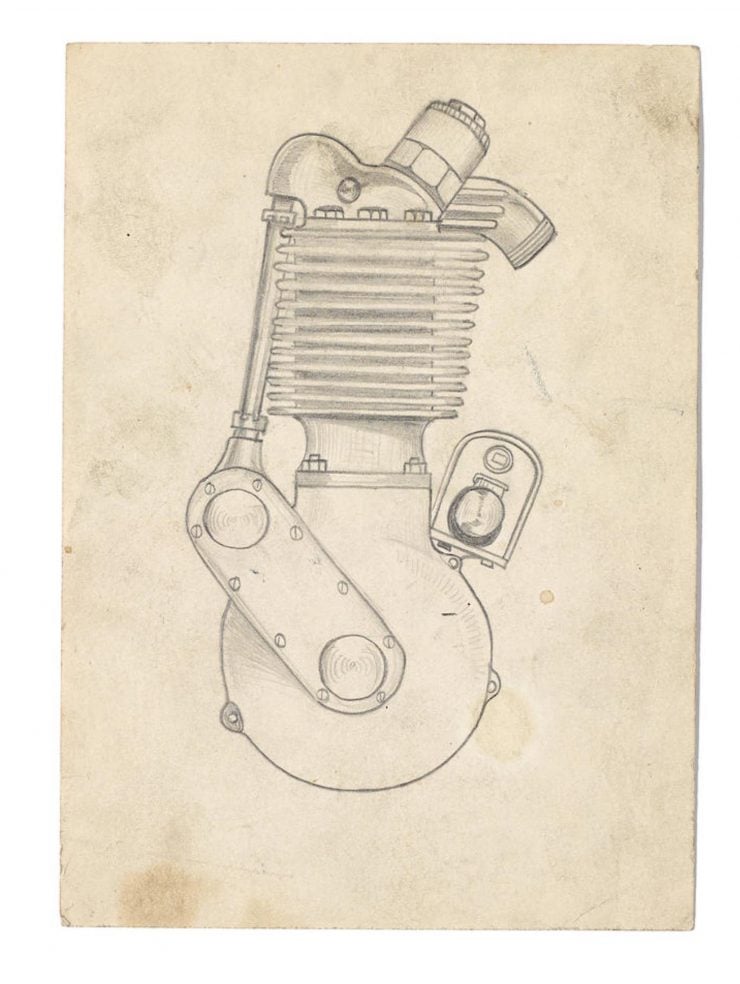 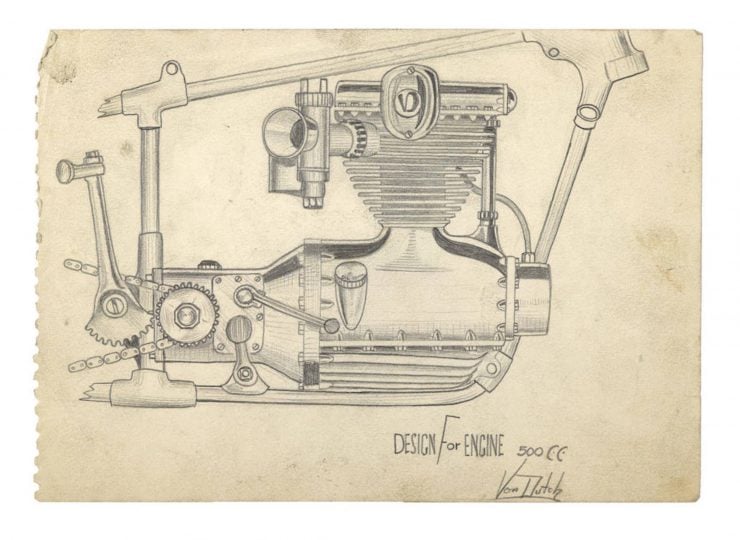 Pencil on paper, sketch of an engine design within a frame, signed Von Dutch, 10″ x 7″. 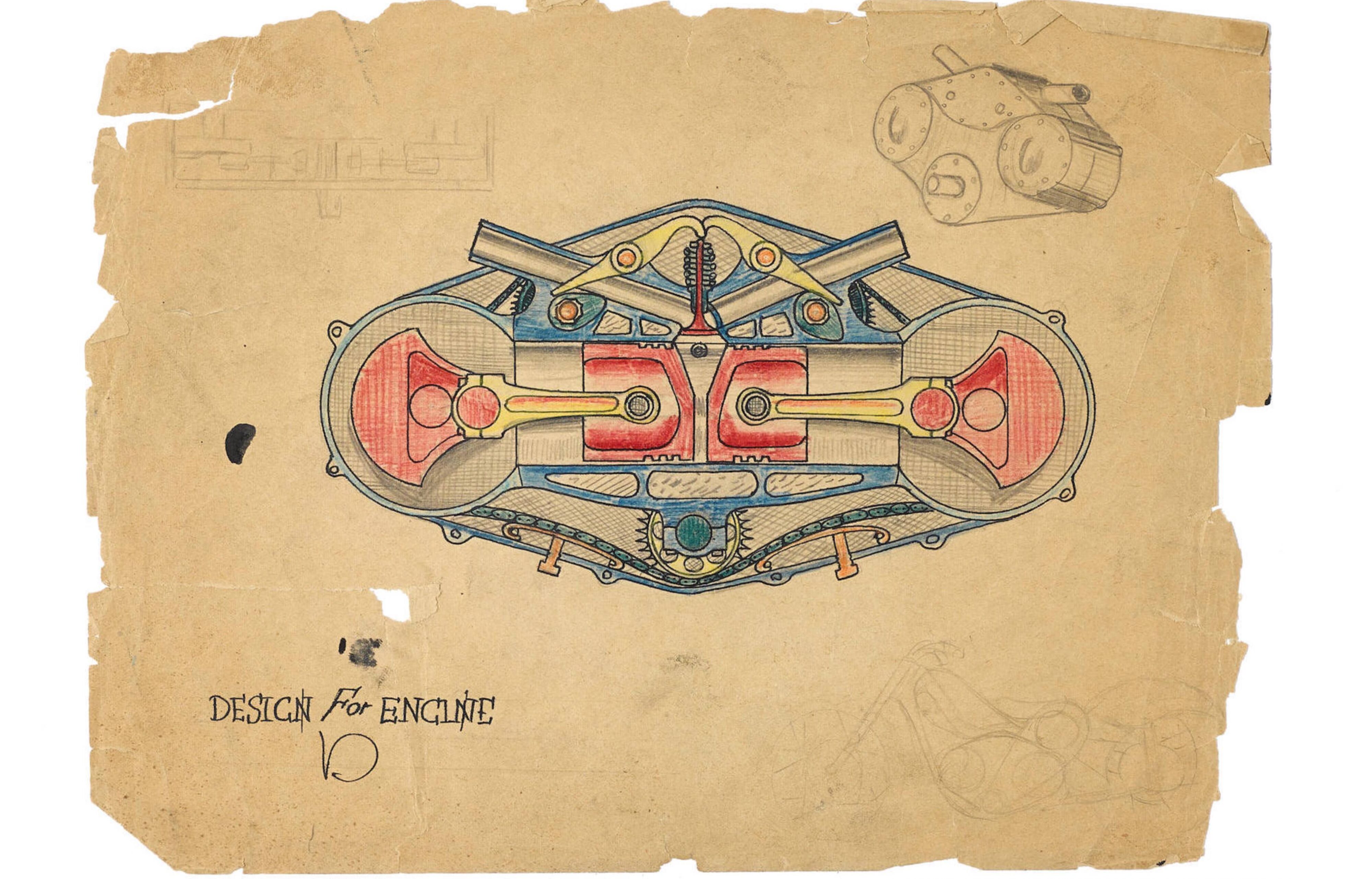