And Now For Something Completely Different: Drag-U-La – The Munster Drag Car 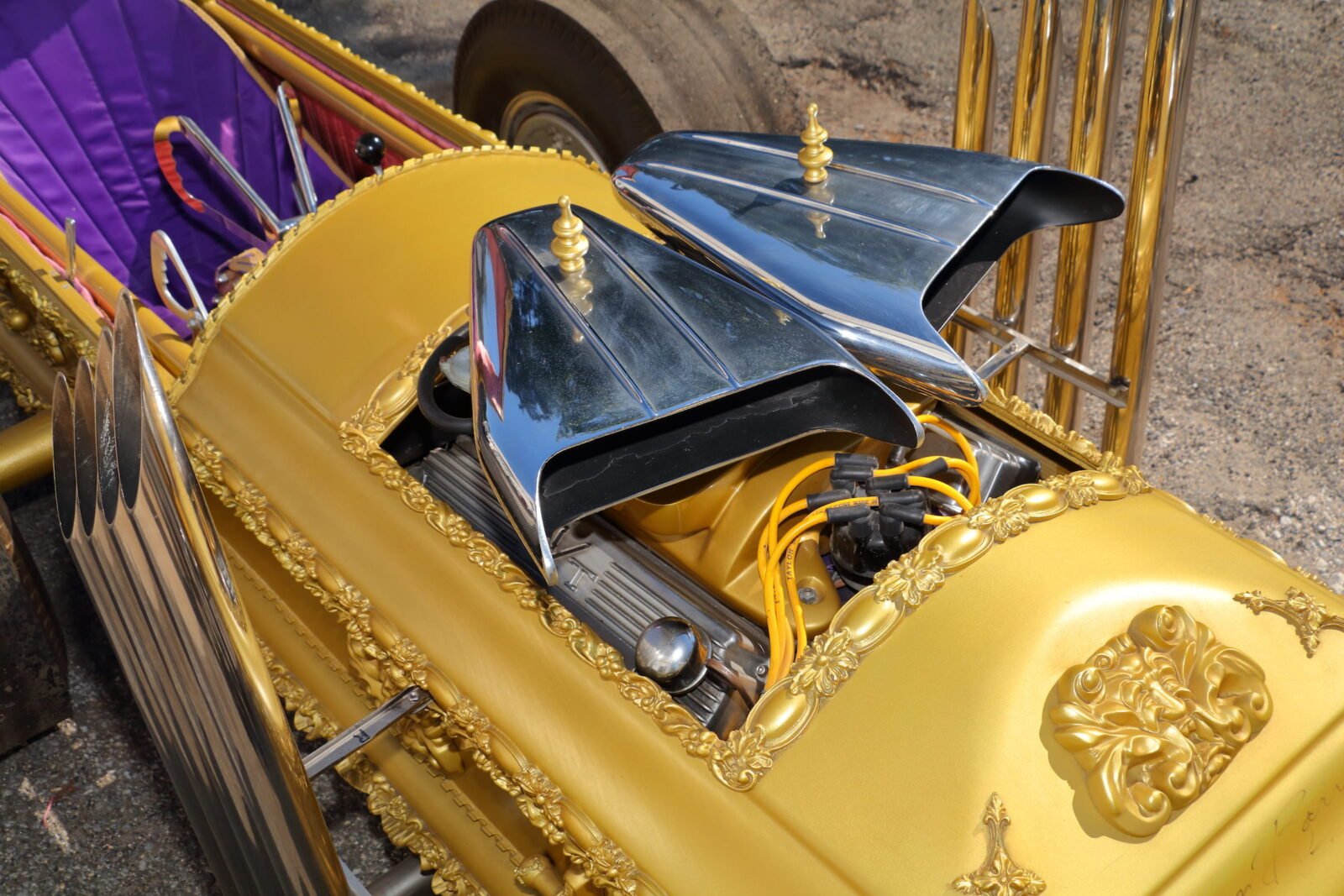 Drag-U-La is a fully-operational drag car designed by Tom Daniel and built by George Barris and his team in 1964. It was restored in more recent years to fulfill the wish of Al Lewis (Grandpa Munster), who wanted to see the car one last time before he passed away.

The restoration was completed in time, and the car was taken to Lewis’ home where he got to see it again, although by this time he was unable to climb in as his health was ailing. Lewis passed away a short time later, and the car was sent to be displayed in pride of place at the Planet Hollywood in Atlantic City.

Cash Under The Table – Sourcing An Illicit Coffin

The design called for Drag-U-La to be built using an actual coffin, but in California at the time it was illegal to sell a coffin without a death certificate.

Richard “Korky” Korkes managed to arrange a cash under the table deal with a funeral home in North Hollywood – the funeral director took an envelope of cash and in return, he left a coffin outside the back door of the parlor later that night.

Korky and the Barris team were then able to swing by and pick it up, loading it into the back of a pick up truck and disappearing into the night – if anyone had seen them they would have looked like body snatchers. 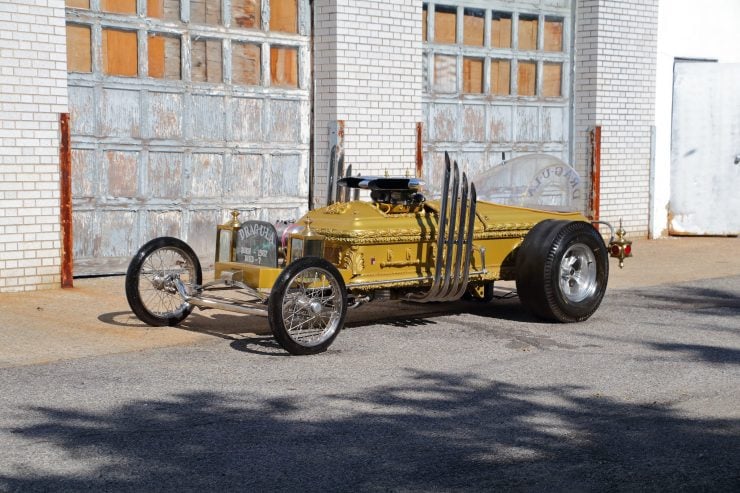 Once the illicit coffin was back in the Barris garage a new chassis was fabricated for it. It was decided that the finished car would need to look and perform like the AA/FD drag cars of the era, so the driver was positioned behind the engine hanging off the rear of the axle, with the differential nestled worryingly closely to the driver’s delicate nether regions.

A modified 350 hp 289 cubic inch V8 from a Ford Mustang was sourced and fitted twin 4-barrel carburetors mounted on a Mickey Thompson Ram-Thrust manifold. The engine was paired with a 4-speed manual gearbox, and in order to get the power down to the ground, a pair of 10.50″ Firestone racing slicks, mounted on 10″ Rader wheels.

Once the car was built the decoration could begin, The Munsters being what it was meant that the car needed a kitch-graveyard look. Up at the front they fitted a tombstone with the inscription “Born 1367, Died ?”, in the show they explain that this is the license plate “from the old country”.

Exhaust pipes that look like pipe organs exit high from each side, there are lanterns front and back by way of head and brake lights, and there’ a Perspex bubble with “Drag-U-La” emblazoned across the back. 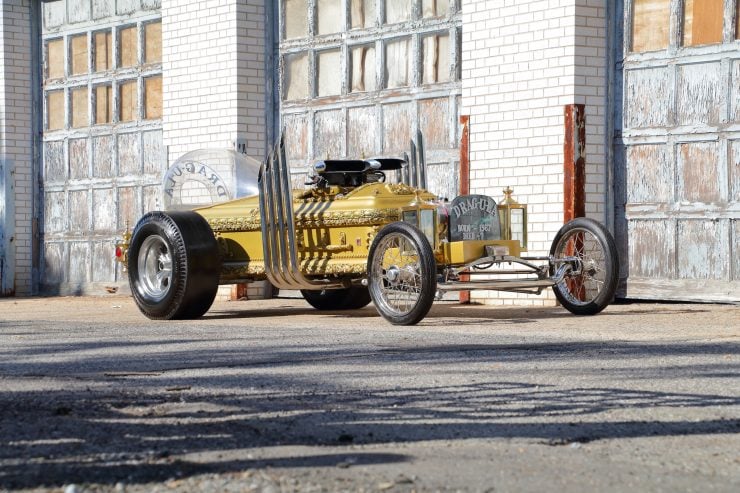 The Drag-U-La would appear on just one episode titled “Hot Rod Herman”, the storyline was that Grandpa Munster need it to win a race, to win back the Munster Coach (also built by George Barris).

In 1966 there was a Munster feature film, and the Drag-U-La would make a popular re-appearance, again needing to win a race. After its onscreen appearances the car was put into storage by George Barris, though it would live on in popular culture, Rob Zombie included a song called “Drag-U-La” in his album Hellbilly Deluxe, and the car was a drivable vehicle in the computer games Twisted Metal 4 and Carmageddon: TDR 2000.

For the first time in years the Drag-U-La is due to come up for public sale at the Mecum Harrisburg Auction, it’s autographed by George Barris, Butch Patrick (Eddie Munster) and Pat Priest (Marilyn Munster), licensed by Universal Studios, and it’s in full working order.

There’s currently no estimated value, but if you want to live out the childhood fantasy that many of us had watching reruns of the show in the ’80s, you’ll need to make your way to Harrisburg at the beginning of August. You can click here to view the listing or register to bid. 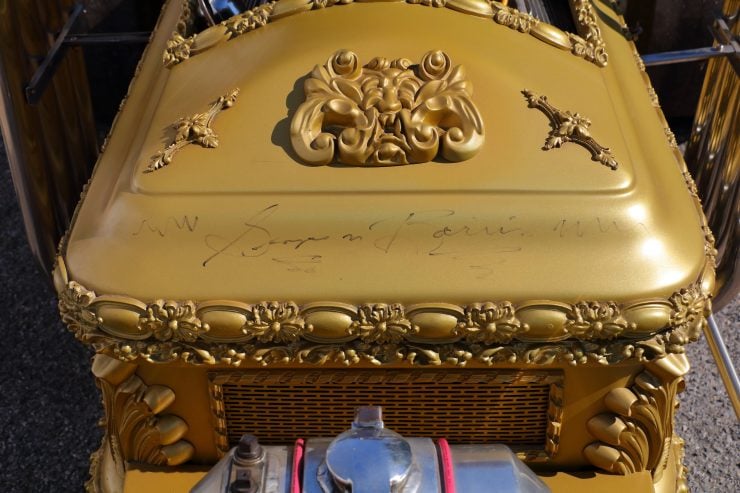 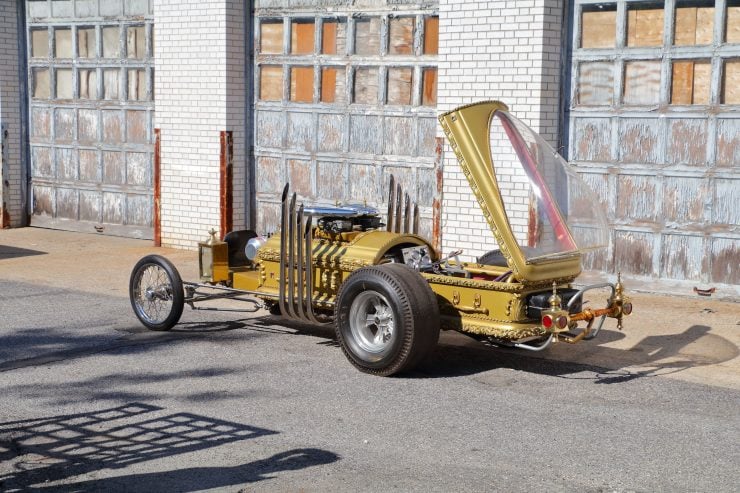 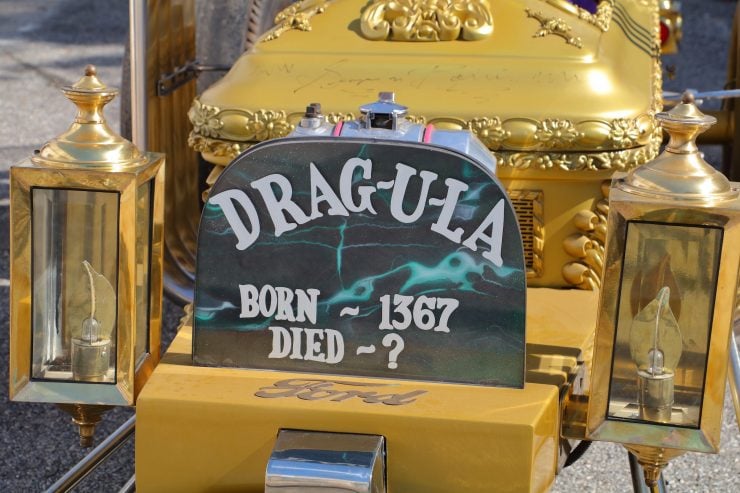 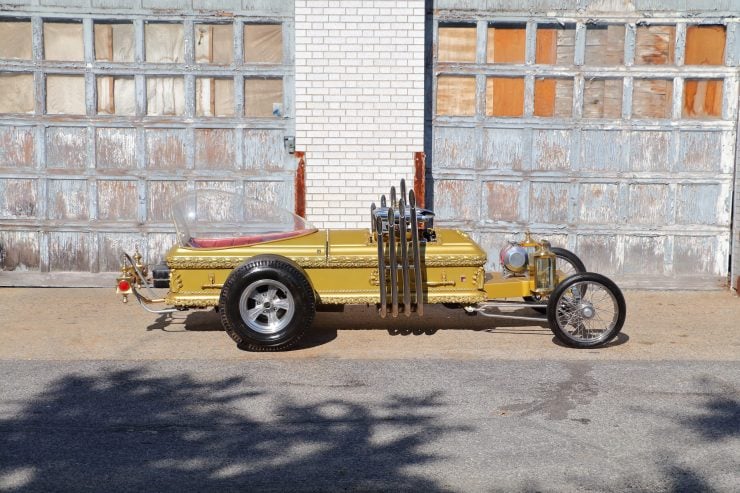 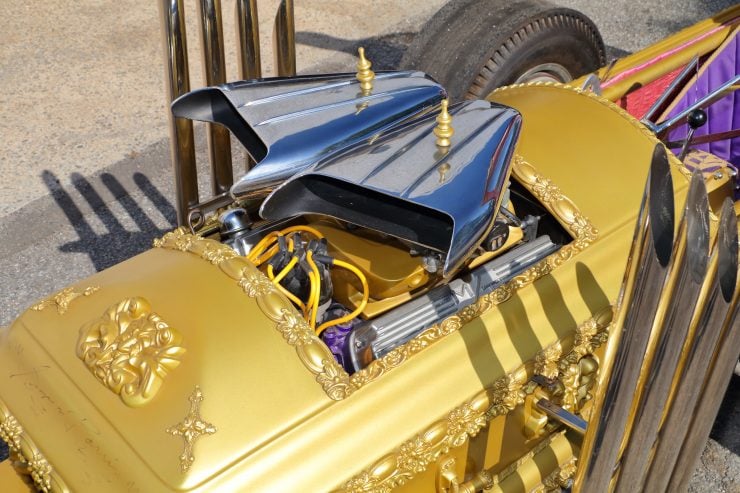 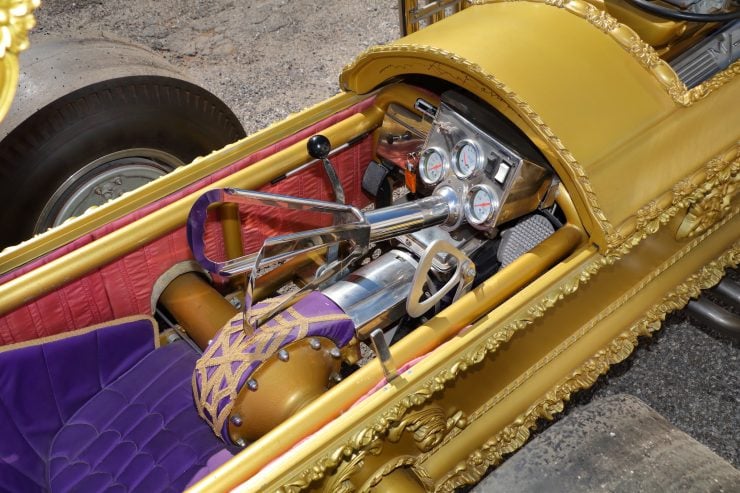 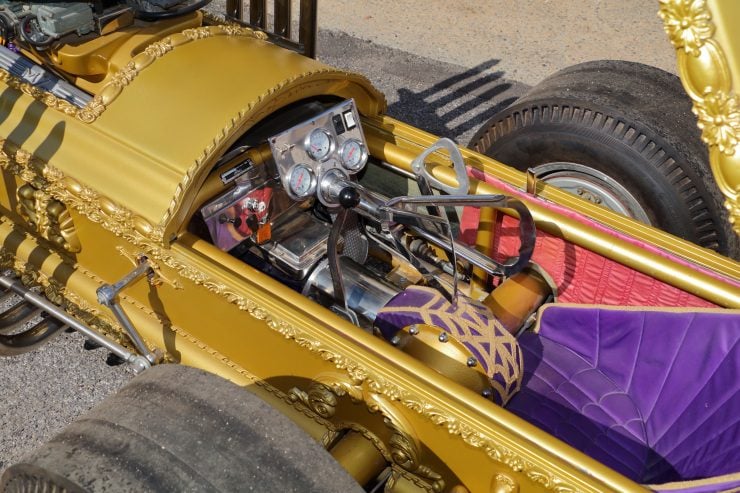 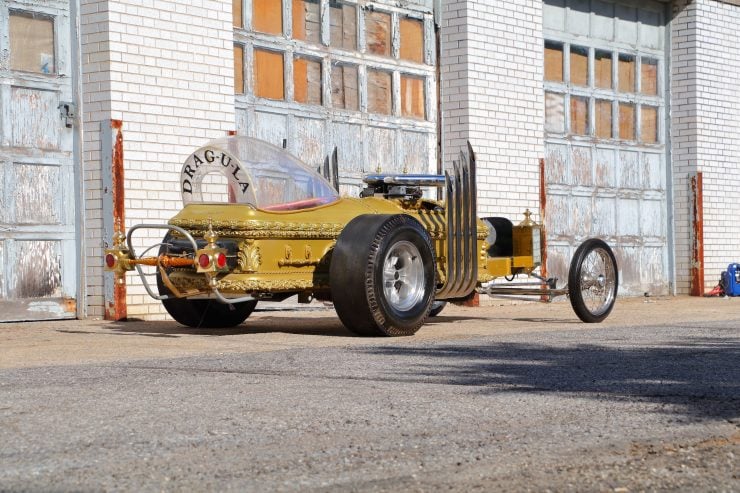 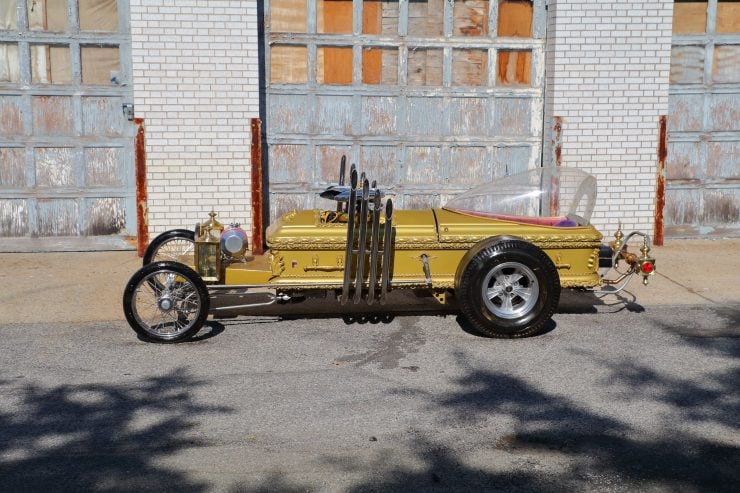 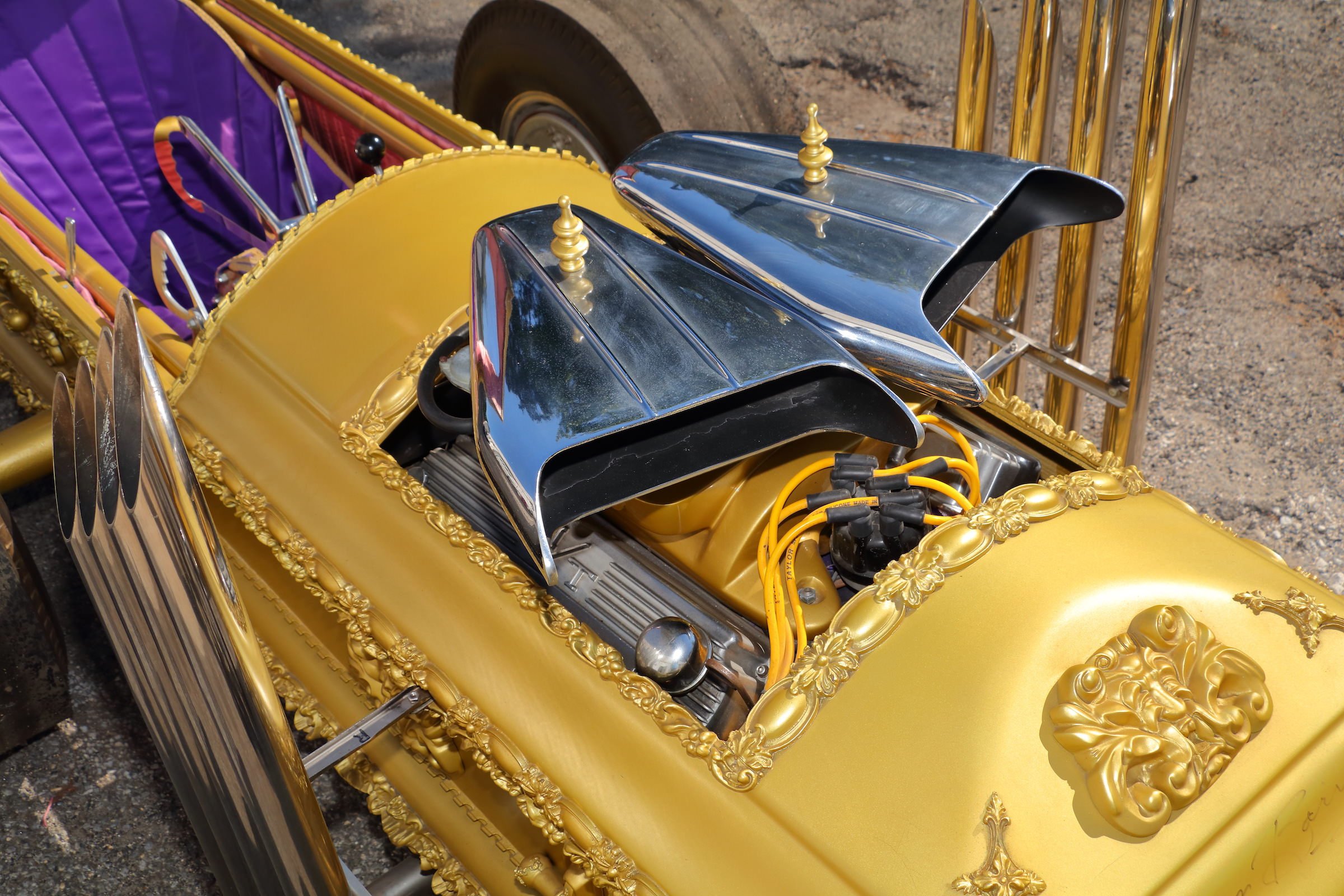 Published by Ben Branch - June 29th 2018
Related Posts
A Rare Davis Divan: “The Ultimate Car Of The Future” From 1948