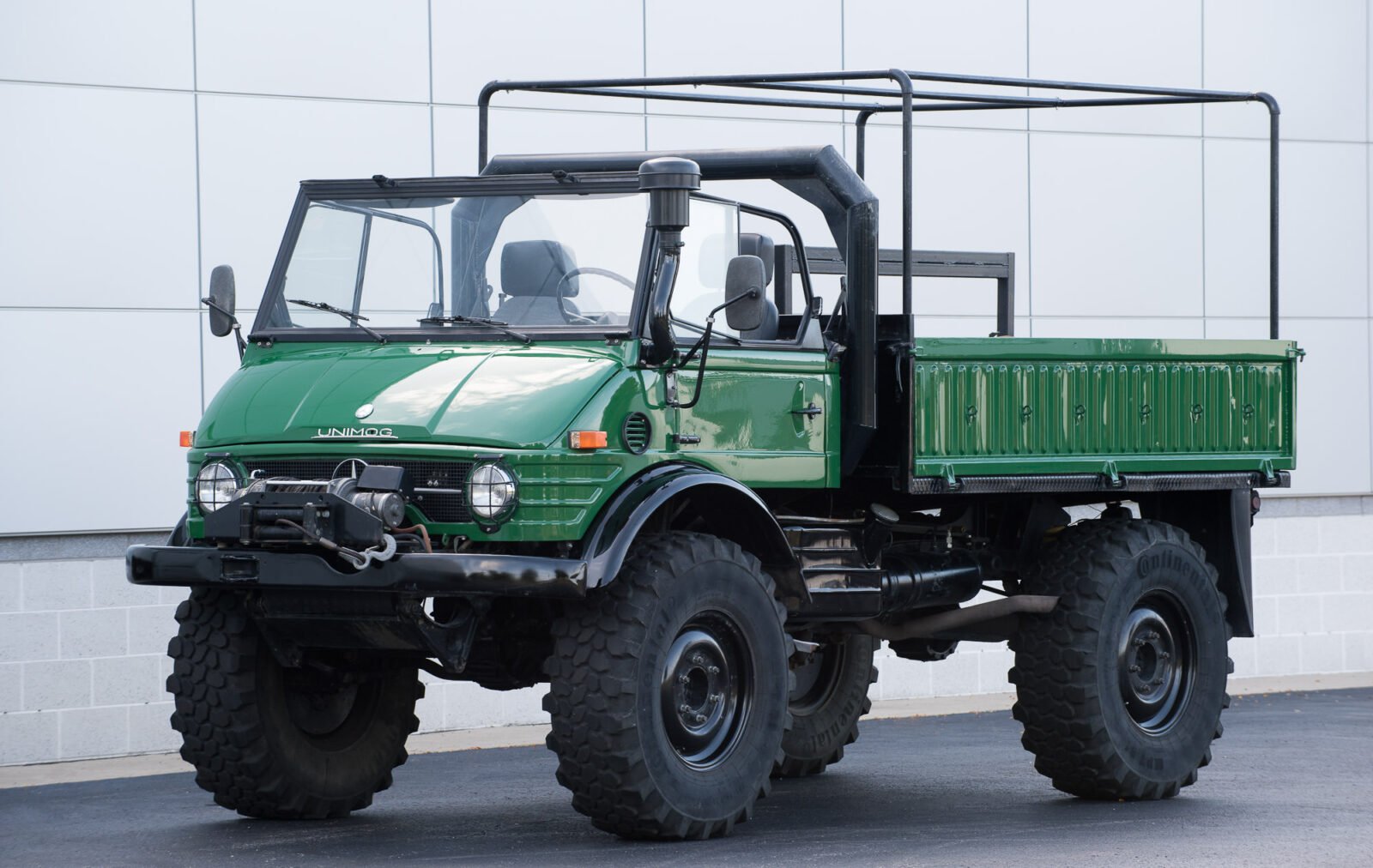 The Unimog 416 was a direct descendant of the first post-WWII Unimogs which had been developed as a vehicle that could be used as both a tractor and a car.

The first Unimogs famously had a track width identical to that of two rows of potatoes, and they had power takeoffs so farmers could operate agricultural machinery in the same way they would from a tractor.

The Mighty Unimog – A History Speedrun

In the years after WWII there was a remarkable proliferation of civilian four-wheel drives being developed and sold to the public. The American Jeep had a large influence on this phenomenon, and it was the Unimogs, Power Wagons, Land Rovers, and civilian (CJ) Jeeps that then inspired a second generation of four-wheel drives from Japan and elsewhere.

The most unusual of all of these was almost certainly the Unimog. It’s one of the most beloved four-wheel drive vehicles in the world due to its sheer size, its off-road ability, and its hard to resist quirky charm.

Perhaps the most famous feature shared by all Unimogs is their portal axles. They use a live axle front and rear which transmits power to the wheels via a portal gear in each wheel hub. This moves the axles up high and gives Unimogs their famously cavernous ground clearance, and their huge wheels and tires. 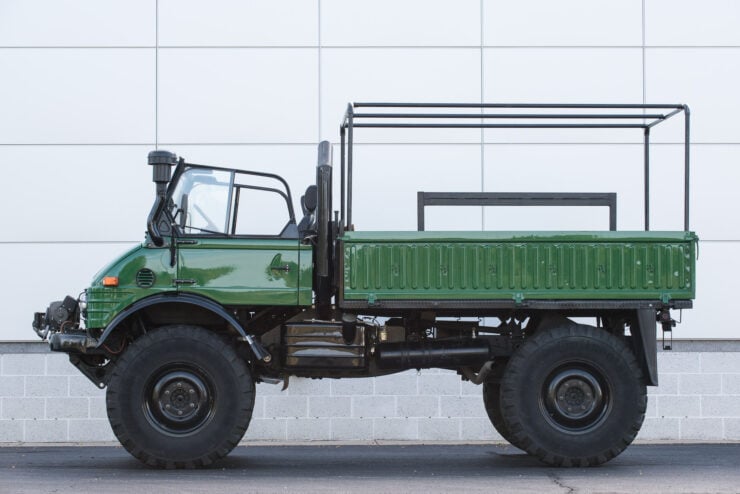 Above Image: Unimogs are famous for their high ground clearance and extraordinary off-road ability, in part thanks to their portal axles.

The Mercedes-Benz Unimog 416 was introduced in 1965 as the first long wheelbase variant of the popular Unimog 406. This longer wheelbase allowed the 416 to serve a multitude of roles from military and construction use to deployments in the service of park rangers, rural fire departments, and search and rescue operations.

Mercedes-Benz would keep the 406 family in production from 1963 until 1989, a remarkable 26 year production run. A slew of iterations and upgrades were introduced over the course of production of course, and many of them are still operational to this day.

The Unimog 416 you see here is from 1978, it benefits from a series of modifications that make it ideal for both recreational or industrial use. It has a retrofitted compressed air tank which allows for the use of pneumatic tools, it can also be used with an air inflator to adjust tire pressure quickly between different terrain types.

The compressed air tank, the fuel tank, and the auxiliary fuel tank have been elevated from their original locations for better ground clearance. As with all Unimogs, this one has portal axles which raise the diffs up out of the way, it’s fitted with steel wheels and 42 inch tires, giving a genuinely impressive amount of clearance.

An intake snorkel is mounted next to the front left A-pillar, it’s 8 feet off the ground and higher than both the driver and passenger head rests – so there should be no reasonable river crossing it can’t tackle. 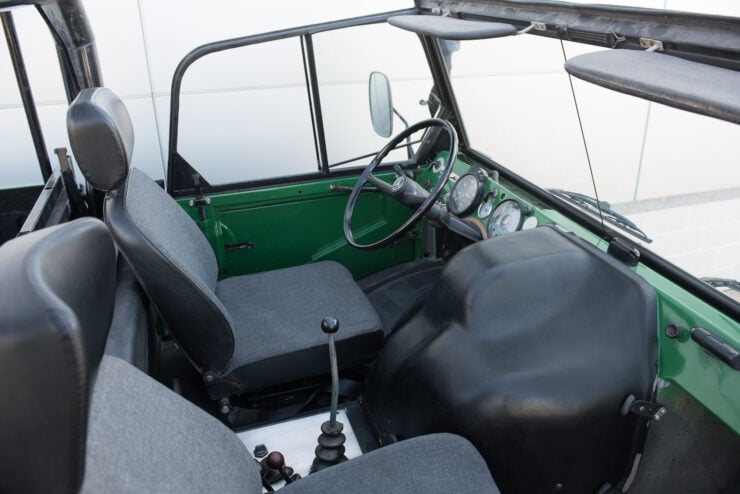 Above Image: This 416 has seating for two, the engine extends back into the cab (under the black cover) and there are 20 forwards gears with eight reverse.

There’s a heavy duty roll bar behind the passenger cabin, in the back there’s bench seating for six people that doubles as a lockable toolbox, and there’s a steel frame over the cargo bay for the fitment of a canvas cover.

Vehicle recovery should be relatively straight forward if it’s ever required, the vehicle is fitted with a 15,000 lb Warn winch up front and a 9,000 lb Ramsey winch in the rear. It’s powered by a 5.7 litre six-cylinder diesel engine (Type 352 – Model 353.940) with 109 hp and 231 lbs ft of torque, sending power back to a transmission with 20 forward gears and eight reverse gears.

The reason the Unimog has so many gears is because the lower gears operate in essentially the same way as a low-range gear box, and the higher gears allow higher speed road use. Although the term “higher speed” in this case is admittedly being used a little loosely.

The seller notes that the Unimog has been completely refreshed and rebuilt, with new paint and no rust or corrosion. The engine currently shows 2,451 hours and the vehicle comes with two sets of keys, and a slew of original manuals and documentation. 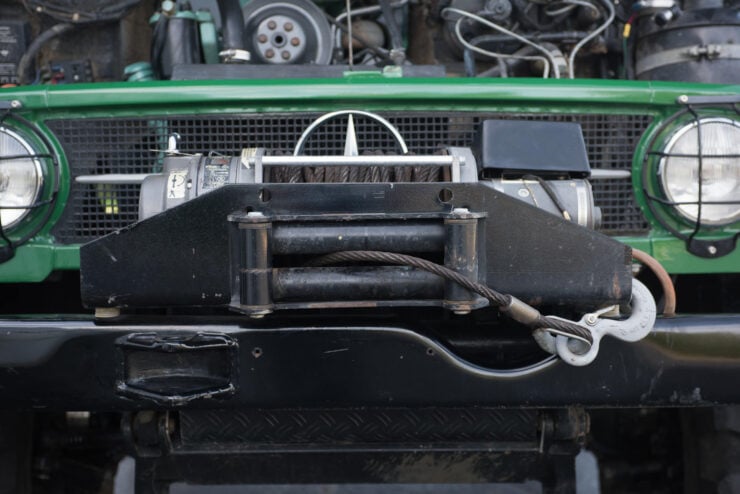 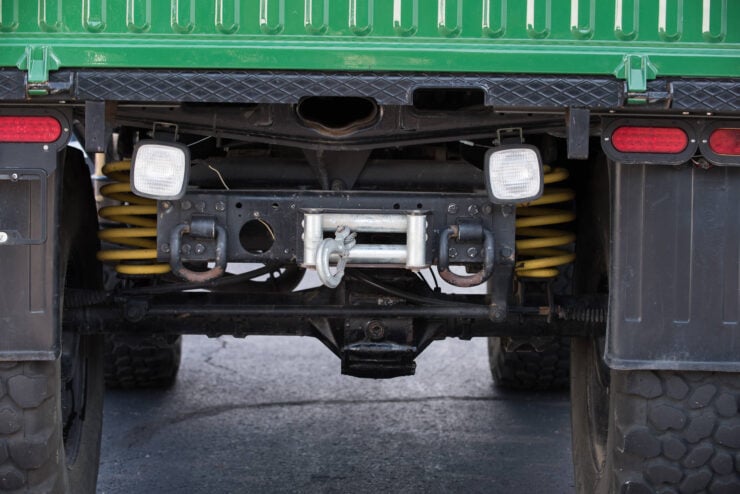 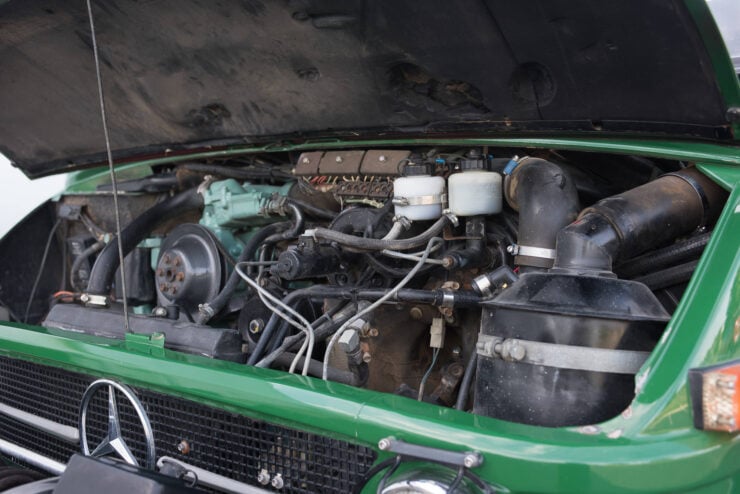 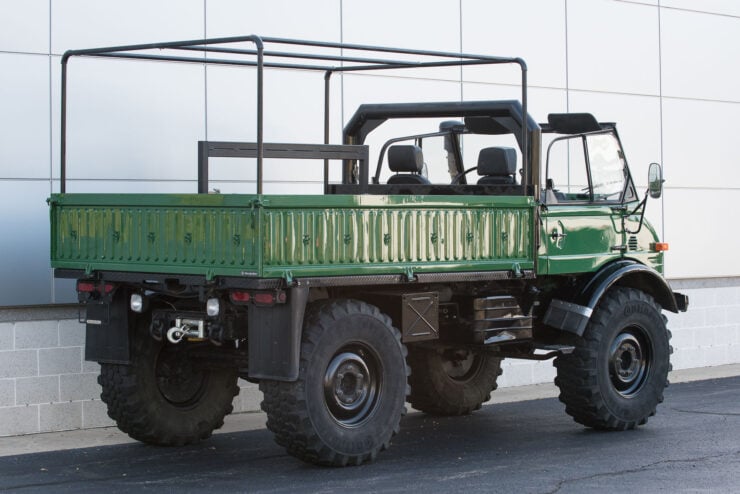 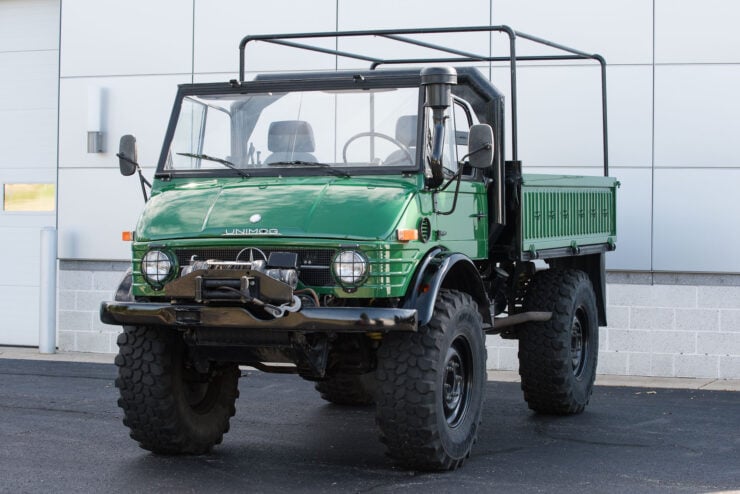 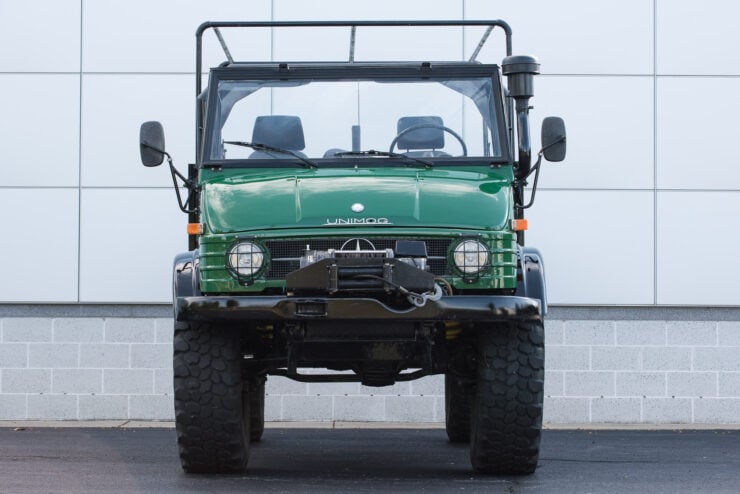 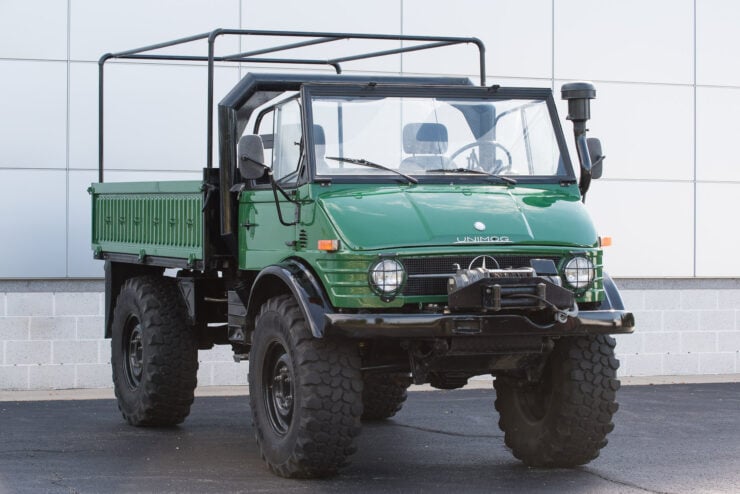 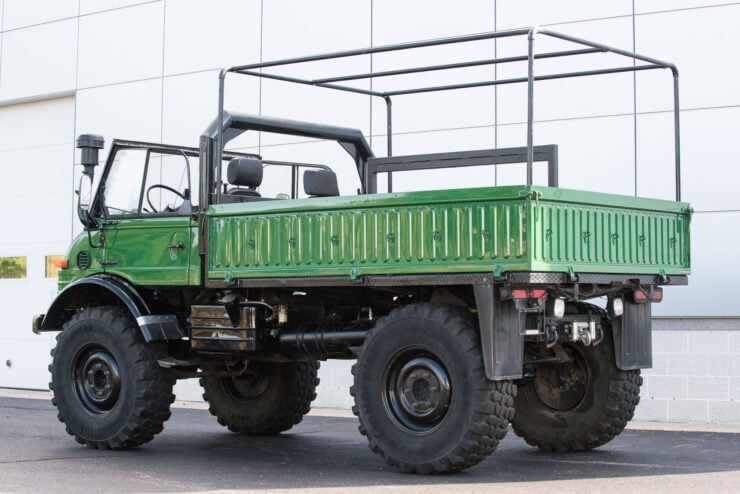 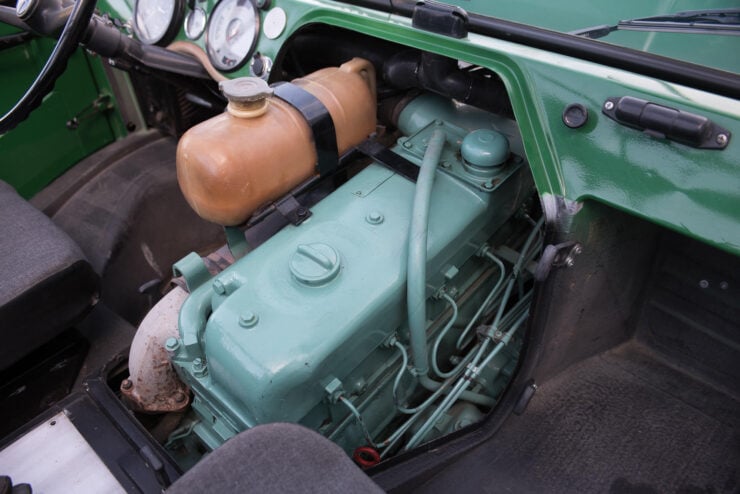 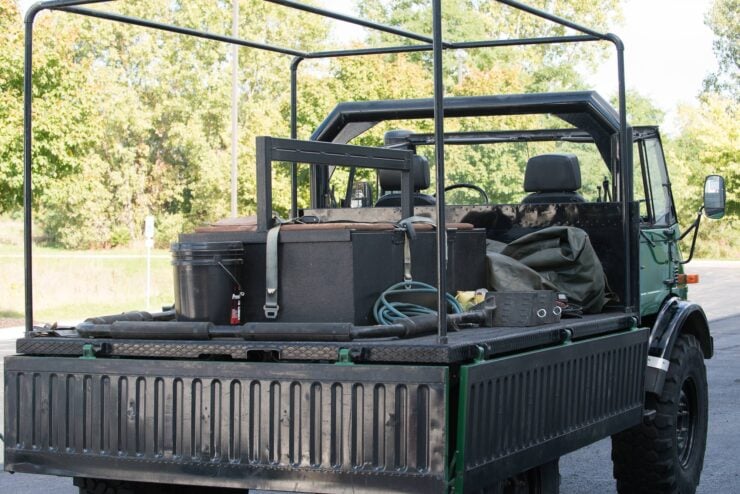