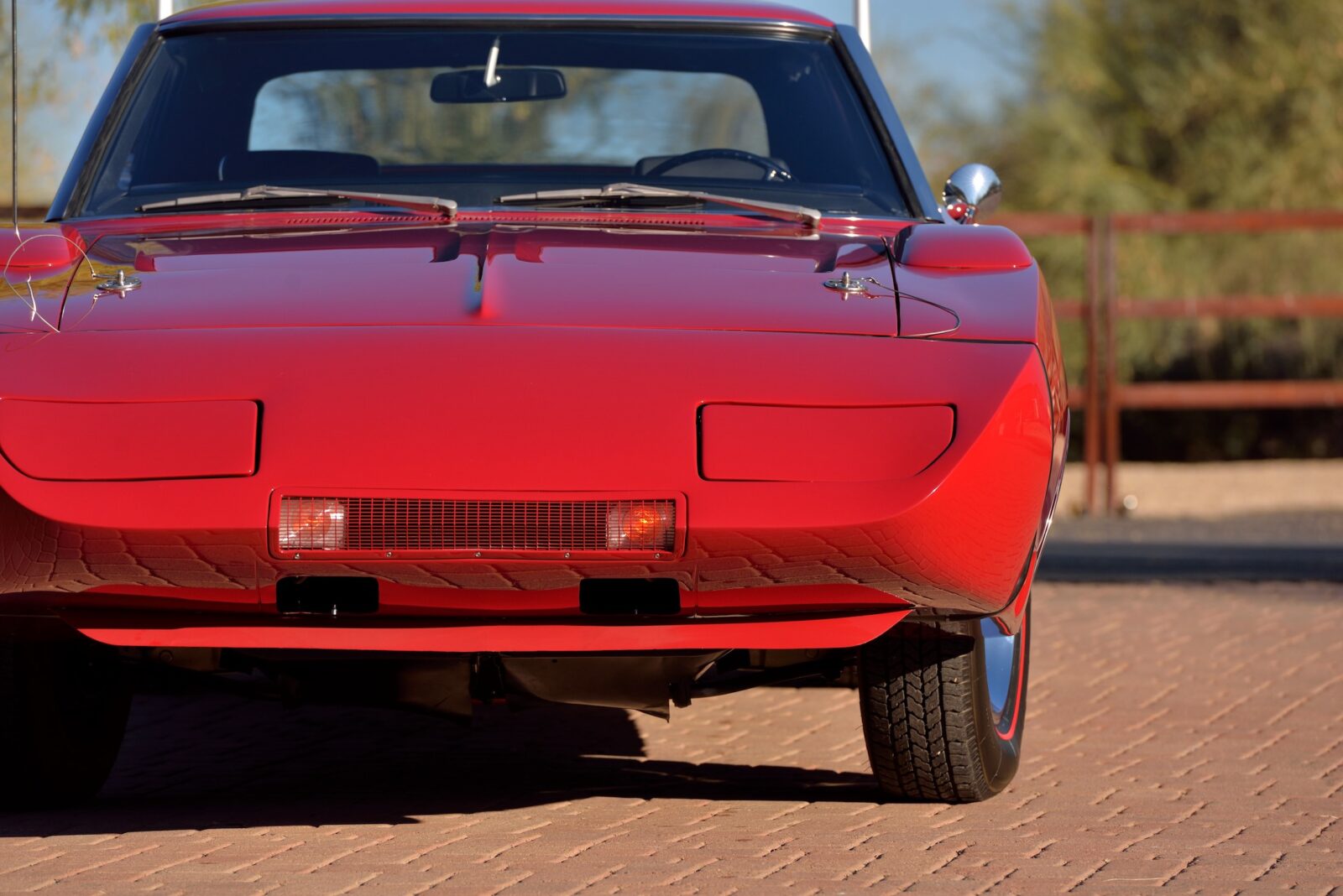 The 1969 Dodge Charger Daytona is one of the most important cars in NASCAR history, it was the first to break the 200 mph barrier and it proved so fast that its immediate successor was essentially outlawed on safety grounds a year later.

NASCAR tire suppliers Goodyear and Firestone both announced they couldn’t supply tires that were able to safely withstand the speeds of the Dodge Charger Daytona – this combined with the car’s wild looks and race-dominating speed led to it being one of the most controversial NASCAR competitors of its age.

Still today, 52 years after it was introduced, the looks of the Dodge Charger Daytona are divisive. Some love them and some hate them, the only thing people can generally agree on is that the car looks entirely unique.

The project to build the Dodge Charger Daytona started in 1968 when Chrysler’s Special Vehicles Group began experimenting with a more aerodynamic version of the regular production Charger. This car looked far less drastic than the eventual Charger Daytona, and its lack of success on the race track inspired further and much more comprehensive aerodynamic changes. 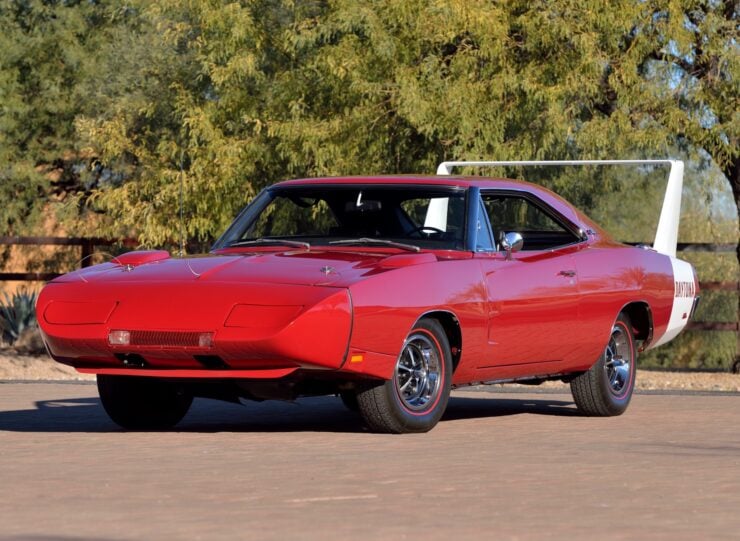 Above Image: The unmistakable nose of the Charger Daytona helped improve aerodynamics and downforce, allowing NASCAR versions to top 200 mph on the track.

The car that resulted from these changes would be the 1969 Dodge Charger Daytona. It was fitted with a new 18 inch “pointy” nose and chin spoiler to reduce high-speed drag and reduce lift. The rear of the car was modified to ensure that the rear window was flush and reverse scoops on both front fenders reduced pressure build up inside the wheel arches.

After fine tuning in a wind tunnel the Charger Daytona had a drag coefficient (cd) of just 0.28, by way of comparison the Ferrari F40 has a drag coefficient of 0.34, the Lamborghini Murcielago measures in at 0.33, and the McLaren F1 sits at 0.32 – smaller numbers mean less drag.

Regardless of the reasoning for its height, the rear wing added the much needed rear downforce as well as some directional stability at high speeds – exactly what the car needed.

Over the course of the one year only production run just 503 examples of the Dodge Charger Daytona were built, enough to meet the homologation requirement but far short of many other NASCAR homologation specials.

The reason for these lower sales numbers was almost certainly the car’s looks, though there were some practical considerations – it was often difficult to find a parking space that could accommodate the 18 ft long vehicle.

Above Video: Some period footage of both the Dodge Charger Daytona and the later Plymouth Superbird in action.

The road-going Charger Daytona were built on the 1969 Charger R/T platform, this meant that the cars had the required heavy-duty suspension and brakes they needed, plus either a 440 cu. in. (7.2 litre) Magnum V8 engine as the standard choice or the slightly more powerful 426 cu. in. (7.0 litre) Hemi V8 which came at additional cost. Just 70 would be sold with the Hemi.

For 1970 the 1970 Plymouth Superbird replaced the 1969 Dodge Charger Daytona, both cars look similar and are often mistaken for one another, though the cars aren’t identical – the Superbird is a development of the earlier Dodge.

The Dodge Charger Daytona you see here is an original survivor and importantly, it’s just 1 of 92 4-speed manual Charger Daytonas listed in the Chrysler Registry.

This car benefits from a full rotisserie restoration back to original specification, it’s the only one optioned in this manner per the Chrysler Registry Report. It’s powered by the Code E86 440 cu. in. 375 hp Magnum V8 which sends power back through a 4-speed into a D91 Dana 60 3.54 Sure Grip differential.

Restoration photos are included as well as a copy of the original window sticker. The car is due to cross the auction block with Mecum in March and at the time of writing there’s no estimate. 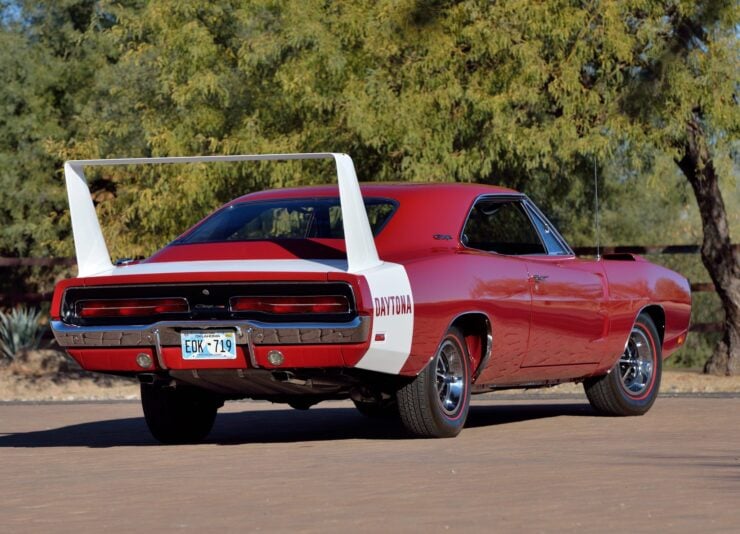 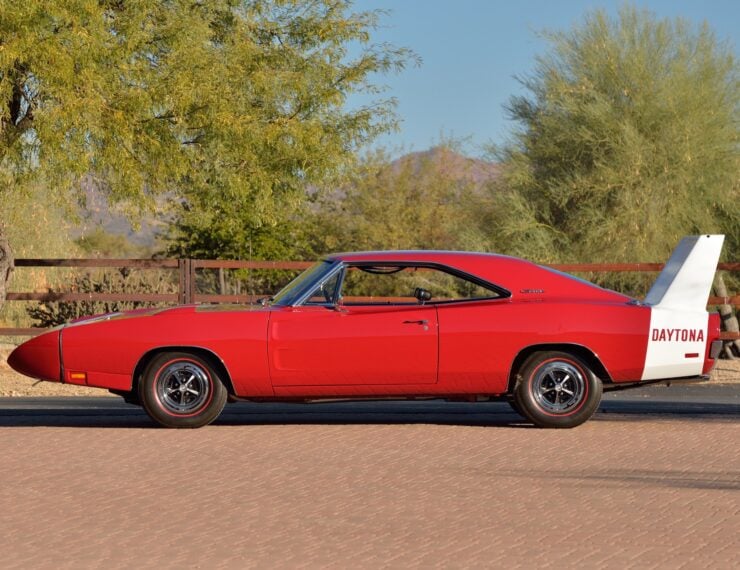 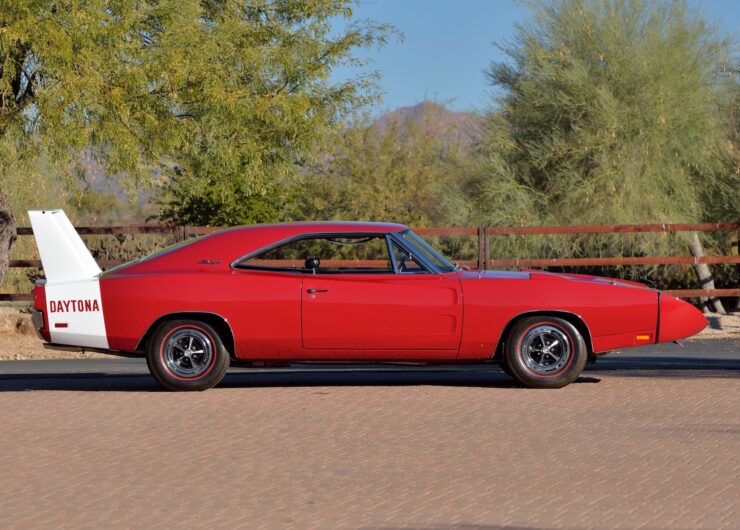 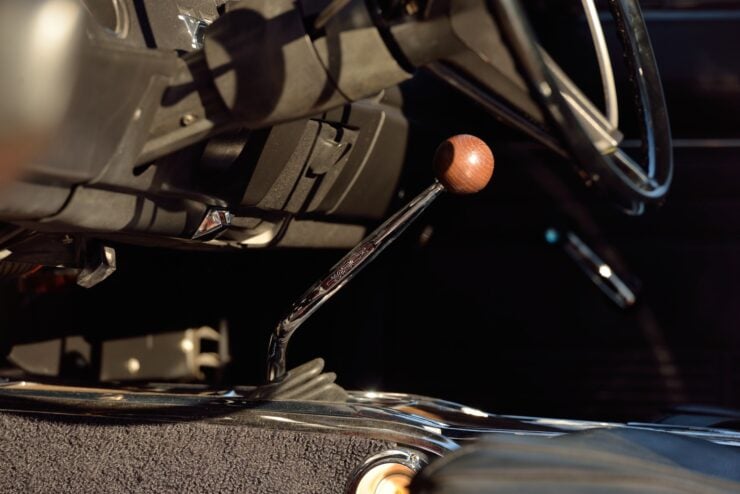 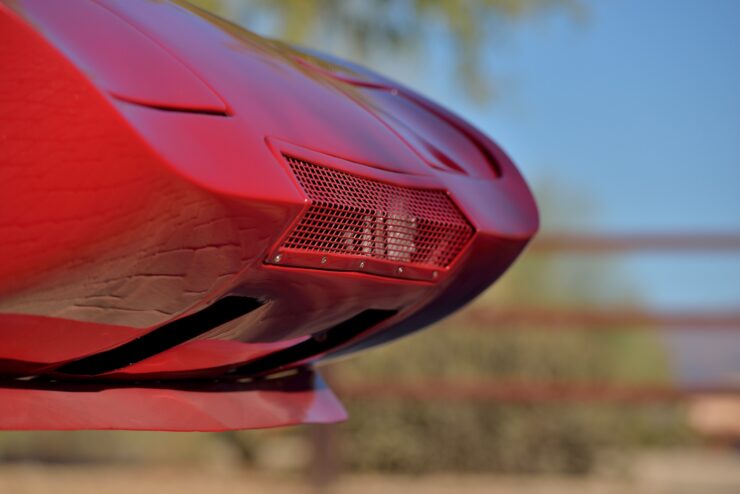 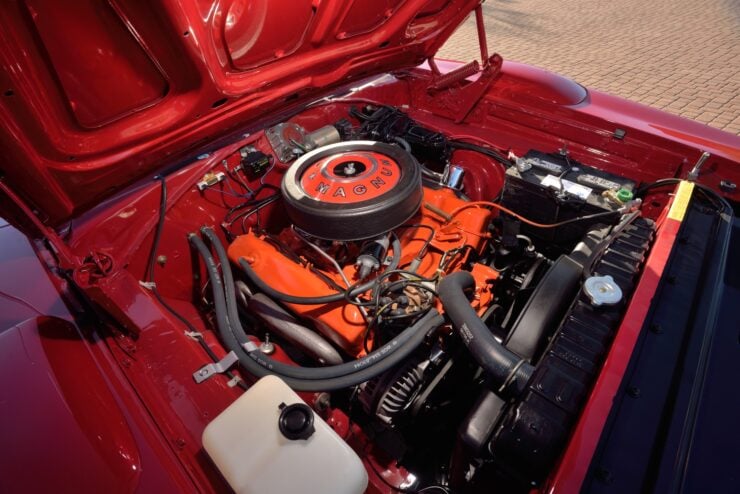 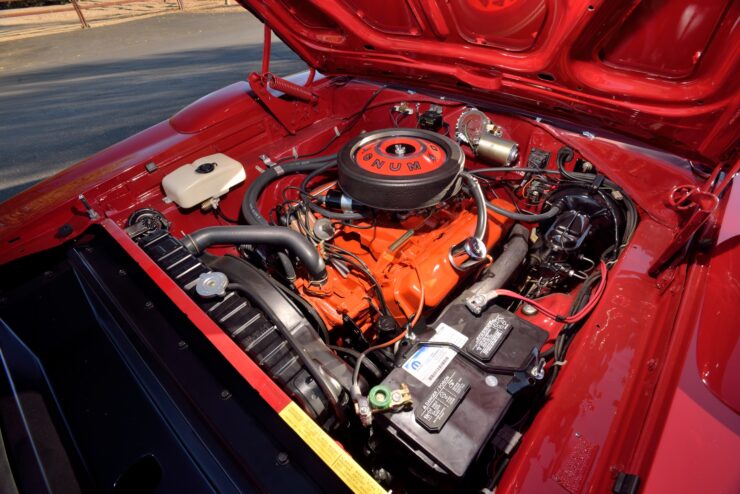 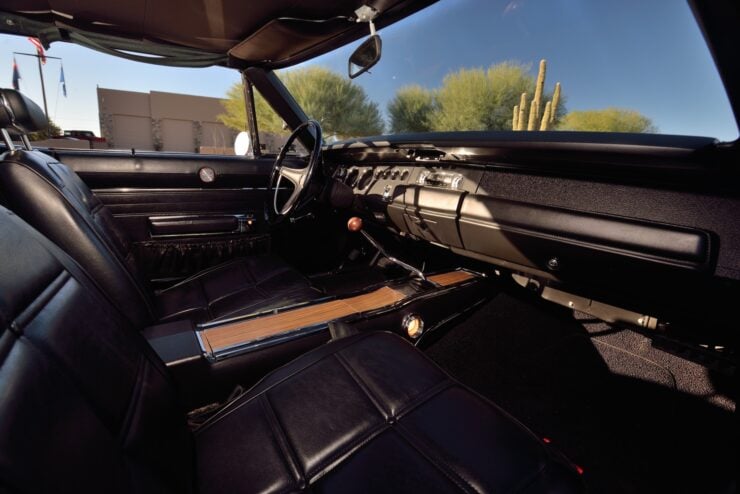 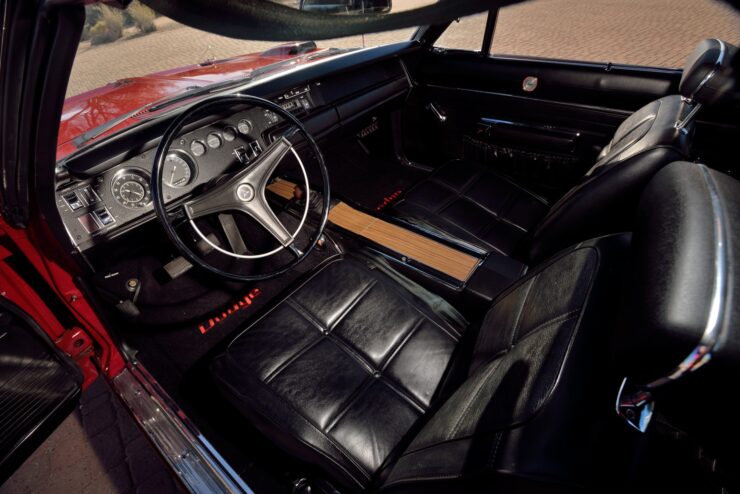 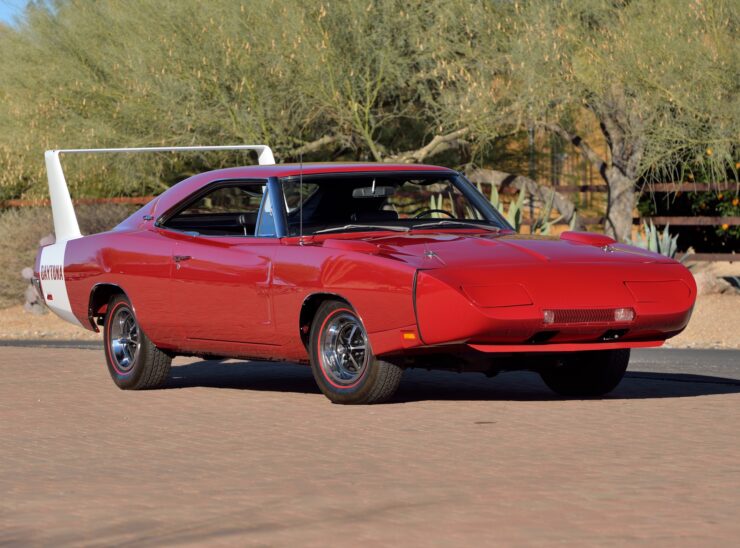