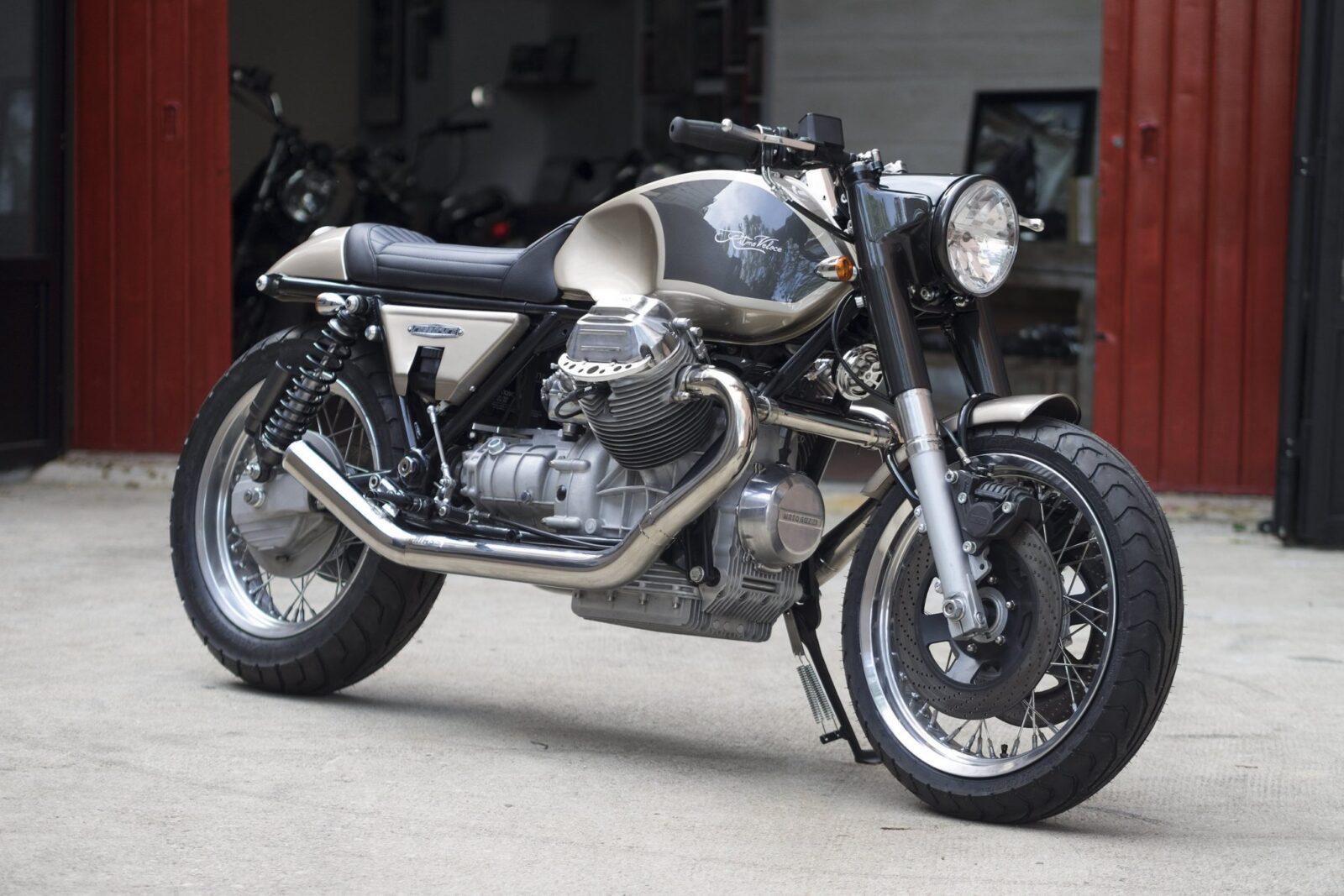 Filippo Barbacane started Officine Rossopuro in 1998 as a small shop that sold custom motorcycles, as well as parts and apparel. Based out of Abruzzo in the mountainous region of East-Central Italy, the little shop quickly made a name for itself in Italy and around Europe, and today it’s recognised as one of the first sparks of what would become the modern custom motorcycle movement.

The T3 California is a motorcycle that was essentially designed by the L.A.P.D. Traffic Enforcement Division in collaboration with Moto Guzzi in the late 1960s. American police officers were used to riding large Harley-Davidson V-twins, and Moto Guzzi same a potentially lucrative American contract that would bring the Italian company some much-needed hard currency.

The air-cooled V-twin is mounted longitudinally in the Guzzi, as opposed to the transverse mounting used by Harley-Davidson. There are some benefits to this, the cylinders are both out in clean airflow which is great for cooling, and valve train maintenance can be easier due to the open access to the heads.

The L.A.P.D. required a bike that could carry a full assortment of police gear, including a bulletproof Lexan windshield, and still manage a 1/4 mile dash of under 16 seconds. The Moto Guzzi T3 California did it in 14.3, and quickly became a favourite amongst motorcycle cops due to its agility when compared with the Harleys.

With 59 hp at 6800 rpm and a wet weight of 540 lbs (245 kgs), the T3 was never going to set the world alight with its performance. But as a cruiser it was one of the best options available anywhere in the 1970s, and the model has been in production in some form ever since.

When Filippo sends us his latest build it always attracts a lot of interest around the office. He’s a man that many leading custom builders point to as a major course of inspiration , and he has a talent for design that seems to be distributed in the tap water across Italy.

The idea of taking a T3 California and turning it into a cafe racer is something we really don’t see all that often. And when Filippo explained that he’s done it without cutting the frame or making any permanent modifications we were a little skeptical – although we really shouldn’t have been.

The donor bike was stripped back to its constituent parts, and the new build began. It was decided from the outset to make sure the bike could be returned to original spec at any time – so no frame cutting was permitted.

The original hubs were re-laced with tubeless 17″ rims allowing more modern tire choices front and back, and the swingarm was modified to suit. The tank and side panels were constructed to fit neatly onto the bike, and a new seat and tail section was fabricated to fit neatly between the rear frame rails.

Cleverly, all of the instrumentation was installed in the top of the fuel tank, to keep the handlebar/headlight area clean. A fairing was made for the headlight, as well as a much smaller front fender, minimal indicators, and a set of flat bars.

Although the exhaust looks like a pair of straight pipes they actually do contain baffling to keep the noice down, Filippo collaborated with MASS Moto on their design and I think it’s safe to say they’ll be inundated with enquiries from Moto Guzzi owners around the world.

The build was finished off with a pair of adjustable Marzocchi shock absorbers on the rear end, lighter brake rotors, and aluminium motor mounts. It’s startling just how much the bike doesn’t look like a Moto Guzzi T3 California, especially considering the lack of permanent modifications.

If you like what you see, the bike is currently for sale via Office Rossopuro, and you can click here to enquire after it or see more work from the garage. 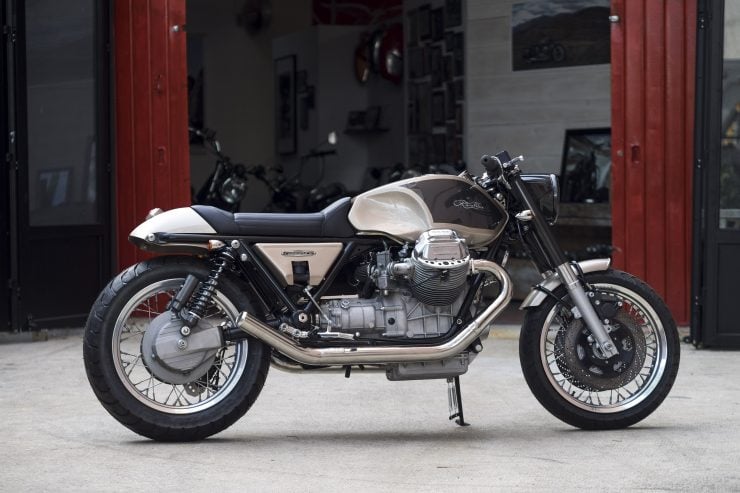 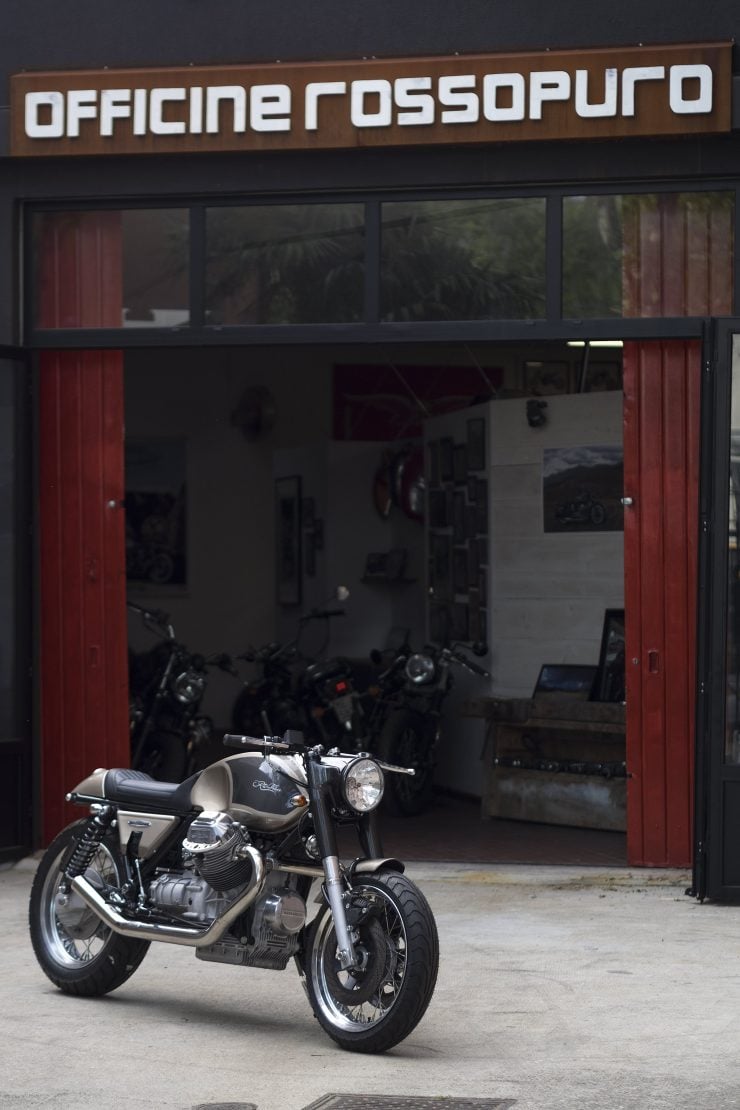 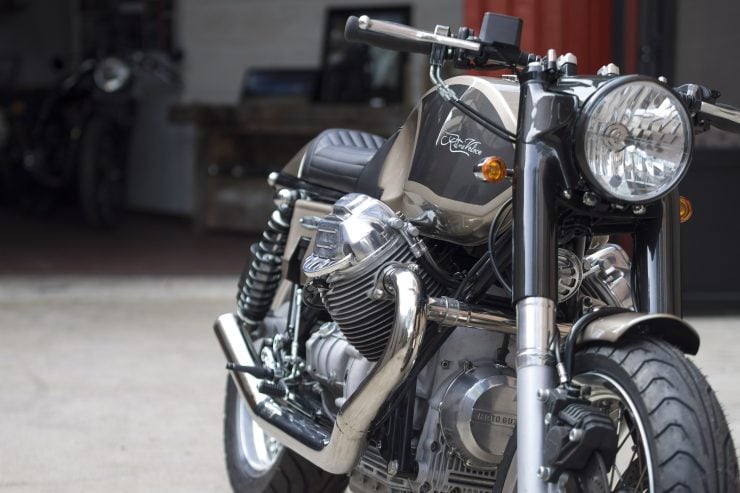 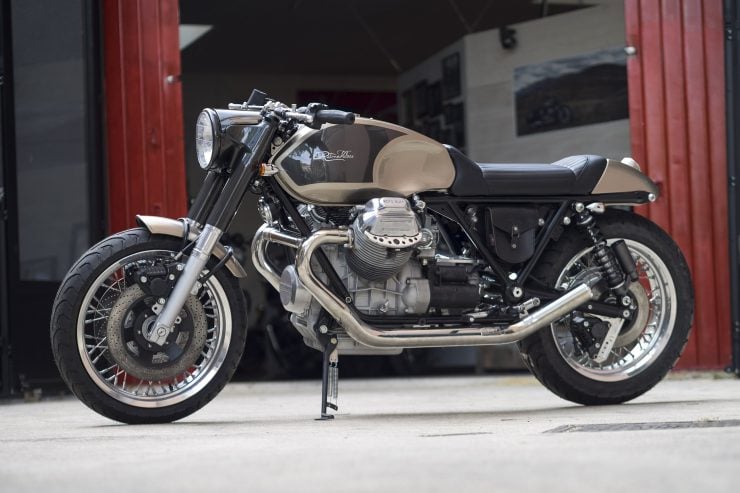 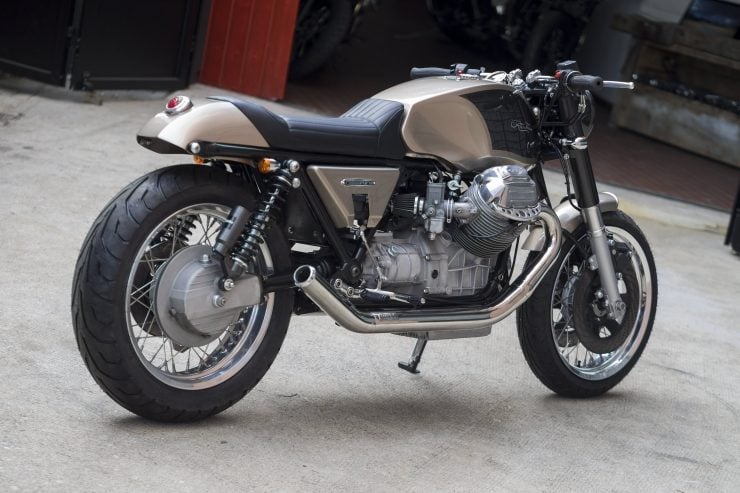 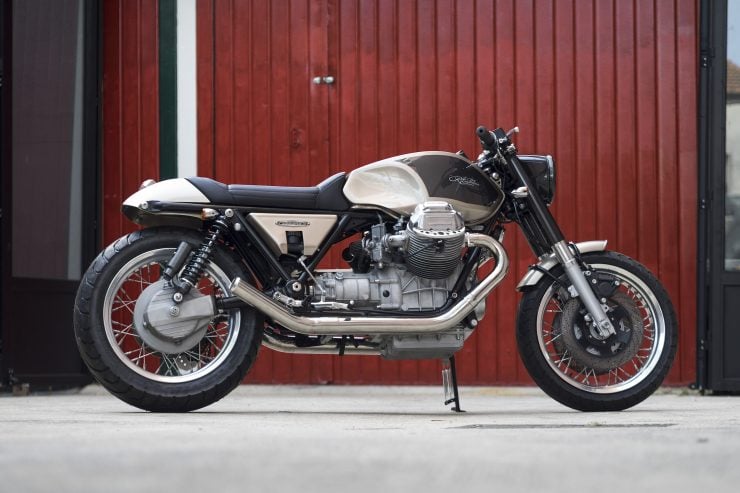 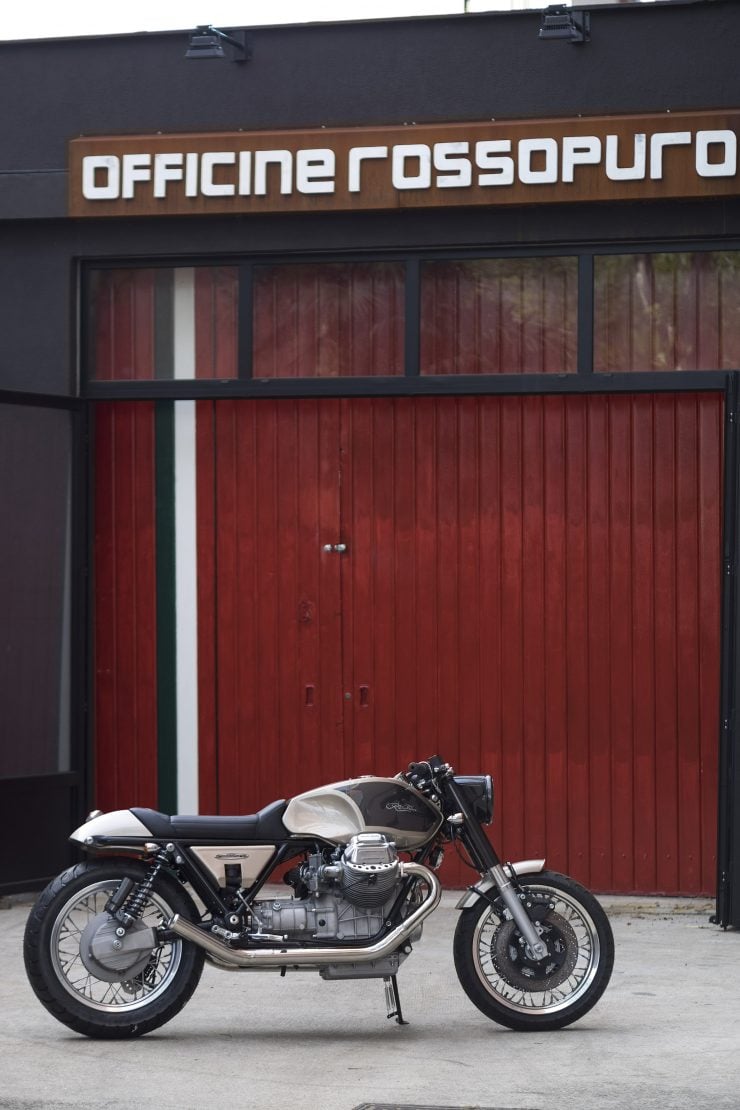 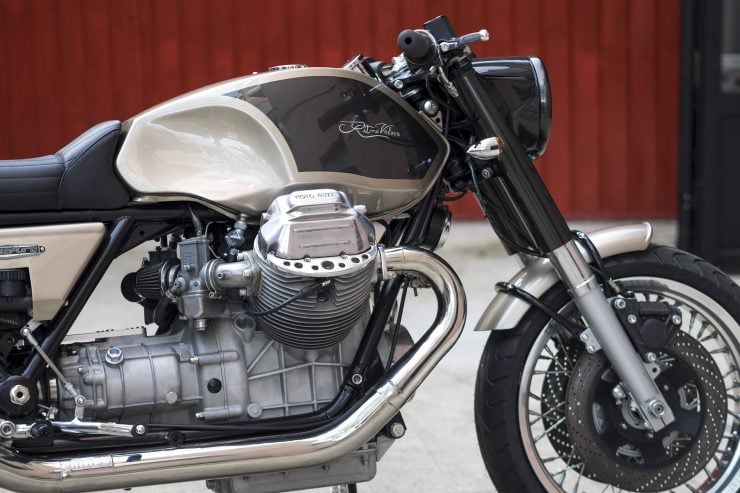 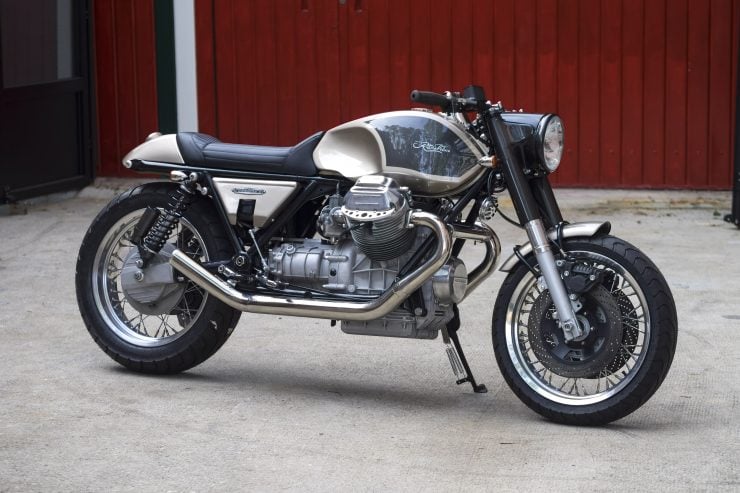 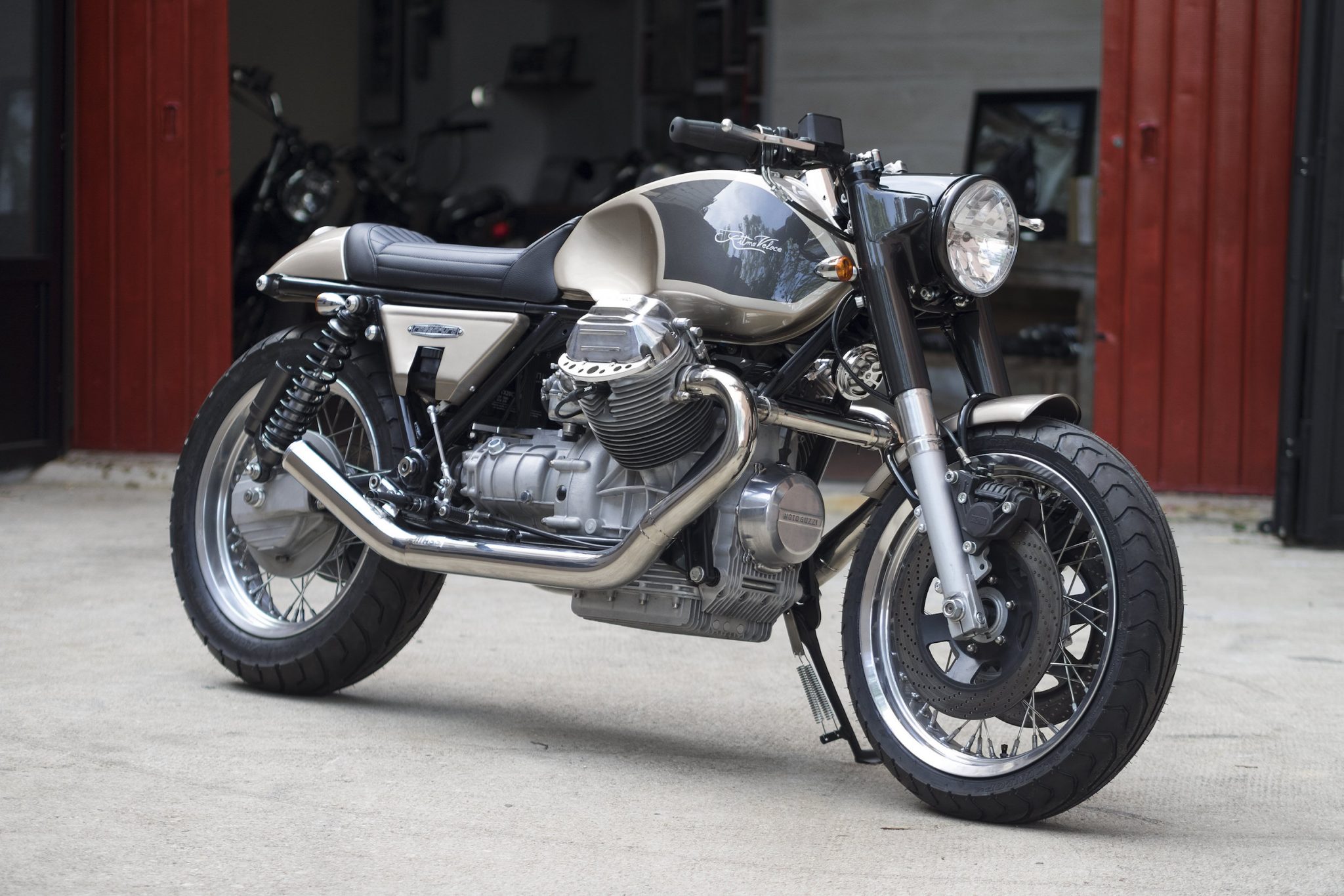