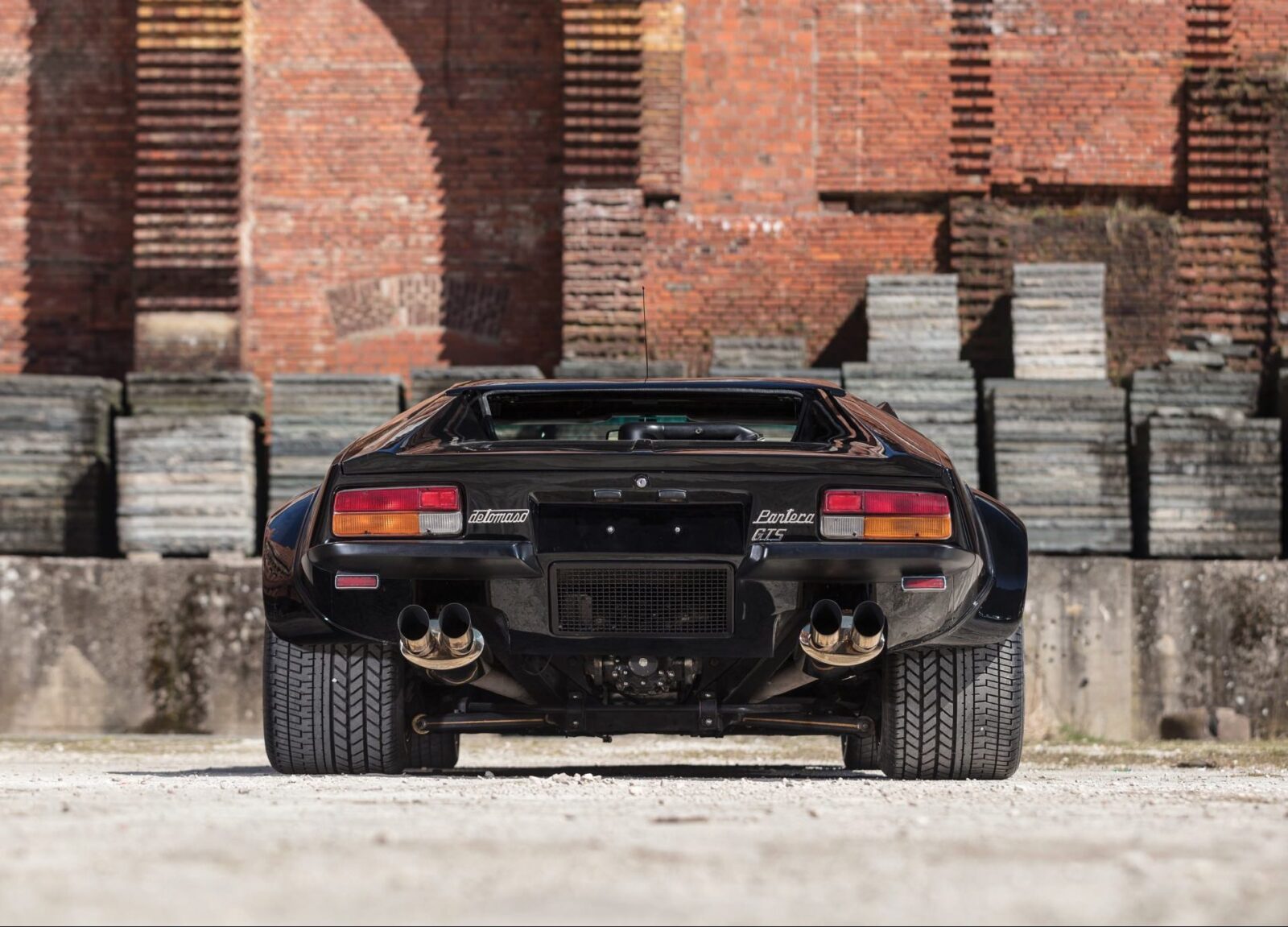 The De Tomaso Pantera GT5 was, in some respects, the blue-collar version of the Lamborghini Countach. Both cars featured a sweeping wedge-shaped profile, big wings, flared wheel aches, roaring engines and more horsepower than half a dozen family sedans.

When new, the Countach cost over $100,000 (in 1980s money) and required a king’s ransom in maintenance costs. The Pantera on the other hand cost approximately half as much – and the maintenance could be done by any small town American mechanic with a working knowledge of Ford V8s.

A Brief History of the De Tomaso Pantera GT5

The early De Tomaso road cars included the Vallelunga and Mangusta, in 1971 the company branched out into luxury four door saloons with the De Tomaso Deauville – but the car the company is always best remembered for is the Pantera – a mighty V8-engined supercar designed to compete with the best from Ferrari and Lamborghini, but at ~50% of their sticker price.

Pantera is Italian for “panther”, perhaps an indication of the vehicle’s sporting intent. Rather than using the steel backbone chassis as they had on earlier models, the new Pantera had a steel unibody – a design feature that helped increase rigidity and strength. The eye-catching styling was done by American Tom Tjaarda who was then working at the Italian design firm Ghia.

An agreement was reached with Ford to sell Panteras off the showroom floor of Lincoln Mercury dealers in the USA – this was a huge boost to De Tomaso, resulting in thousands of sales they might not otherwise have enjoyed. It also gave the dealerships a halo car that would get people through the door, many of whom then left in a less exotic four-door car with either a Lincoln or Mercury badge on the hood. 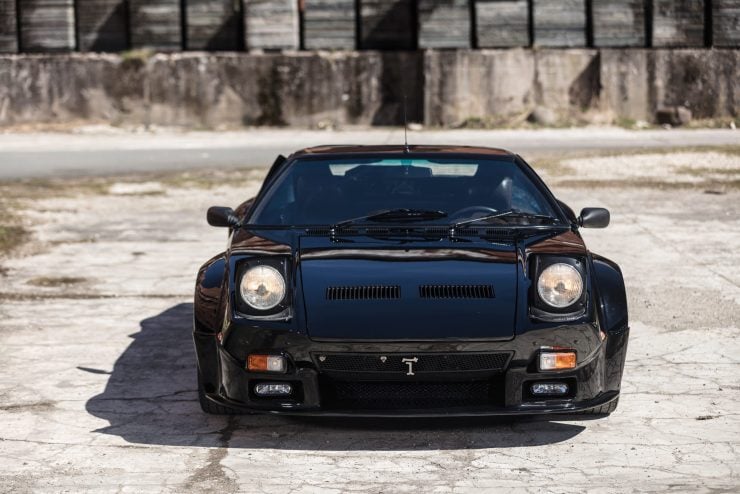 Under the skin the Pantera was an advanced design for the day, it featured a mid-mounted Ford V8, a 5-speed ZF transaxle, power-assisted four-wheel disc brakes, rack and pinion steering, air-conditioning, independent front and rear suspension, and lightweight magnesium wheels.

The first series of Panteras were built from 1971 to halfway through 1972, when the upgraded Pantera L was introduced – that L stood for “Lusso”, the Italian word for “Luxury”. This new model had a black front bumper fitted to reduce lift at high speeds and meet new government regulations, it also incorporated a slew of upgrades and improvements, making it as good or better than many of its Italian contemporaries.

1974 would see the introduction of the Pantera GTS, with all chrome blacked out and new fender flares – this was the most aggressive looking of the early Panteras and it’s the car many see in their mind’s eye when they think of the model. All the early Panteras were fitted with Ford 351 Cleveland engines, though the power output steadily declined due to emissions restrictions – as was the case with many American built and imported vehicles in the early to mid-1970s. In the years since, many owners have worked to claw all of this power back and add some more through engine modifications and performance improvements.

Ford stopped importing the Pantera after 1974, new regulations would have required the car be redesigned from scratch, which was never going to be cost effective. Despite the Ford pullout, De Tomaso kept building and selling them with no loss of enthusiasm, and they could continue to update the model significantly over the post-Ford years. 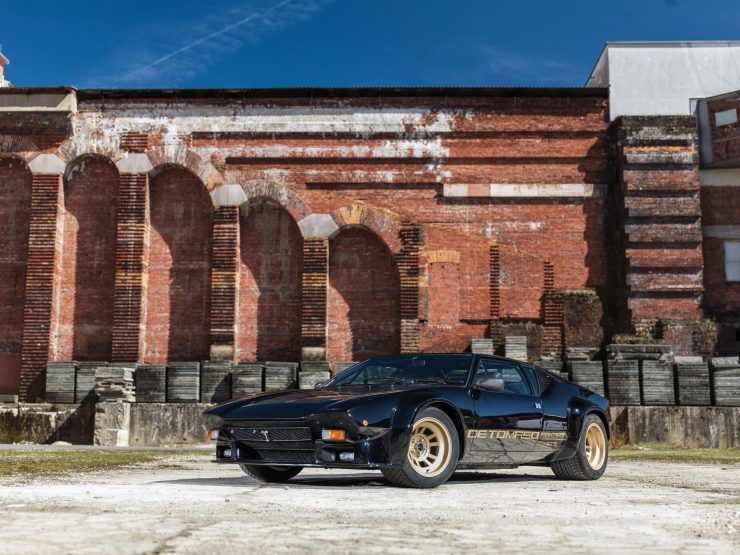 The Arrival of the De Tomaso Pantera GT5

There was a significant redesign in 1980 which saw the unibody completely revised (starting from chassis number 9,000), and from May 1980 the new De Tomaso Pantera GT5 would appear. This new model featured prominent flared wheel arches allowing the fitment of wider wheels and correspondingly wider tires. There was also a new delta wing rear spoiler (not dissimilar to the one on the Lamborghini Countach), and options to fit the more powerful Group 3 racing engine and exhaust, with the higher performance brake and suspension systems, as well as the (now highly desirable) sport seats.

Only approximately 175 examples of the GT5 were built before De Tomaso moved onto the GT5S model, and many of the original GT5 cars were retroactively upgraded to GT5S specification – with varying degrees of skill. This has resulted in the surviving GT5 cars being among the rarest and most desirable members of the Pantera family. 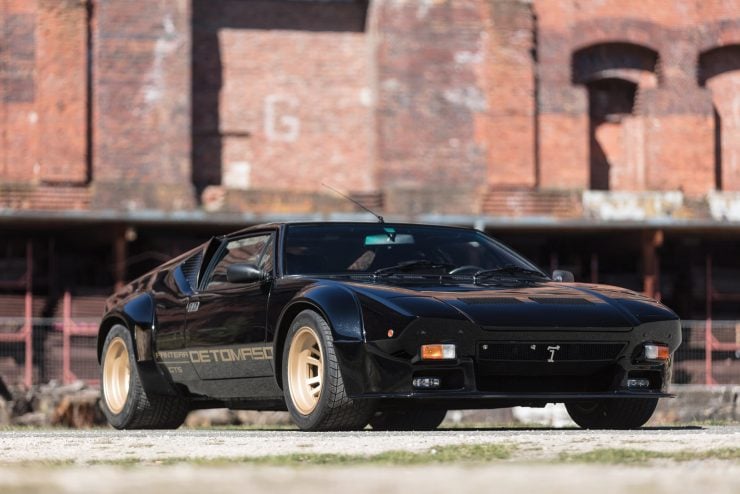 The car you see here is an all-original GT5 from 1984, it’s equipped with all the factory options, and importantly it has a known history from new.

It was originally ordered by Koenigsteiner Handelskontor of the Bad Homburg leatherwear business for use as a promotional vehicle – so it wasn’t actually road registered until a year later in 1986. The car spent its entire life in Germany under careful and fastidious ownership, and the originality is confirmed by documentation provided by RS Corse Srl (the successor company to De Tomaso).

With its black livery, burgundy interior, and gold Campagnolo wheels this Pantera GT5 looks like something Bruce Wayne might daily-drive, if he owned the John Player Team in 1984.

The factory options ticked for the car include the highly-desirable Group 3 racing engine, exhaust, brake and suspension systems, as well as the hugely rare and desirable sport seats. The 351 cubic inch Ford V8 produces 404 bhp – giving a 0-60 mph time in the mid-5 seconds and a top speed that would require an autobahn, an airport runway, or some very understanding police officers. 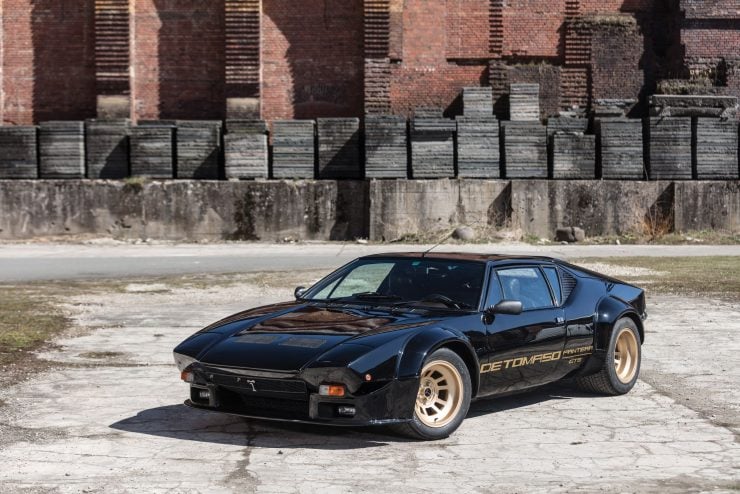 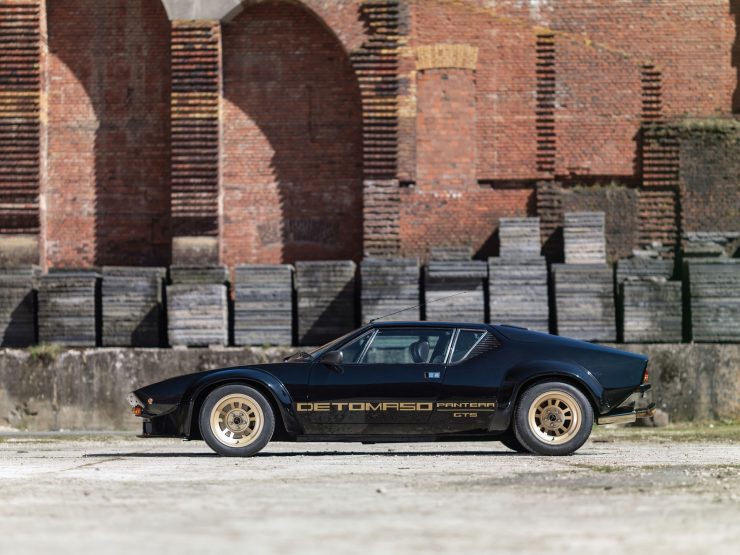 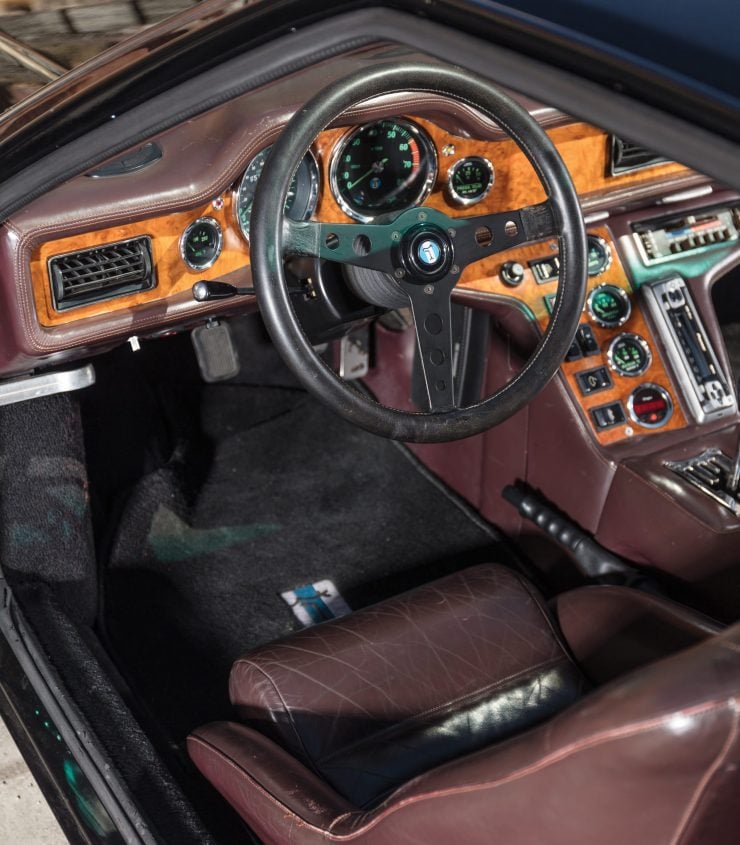 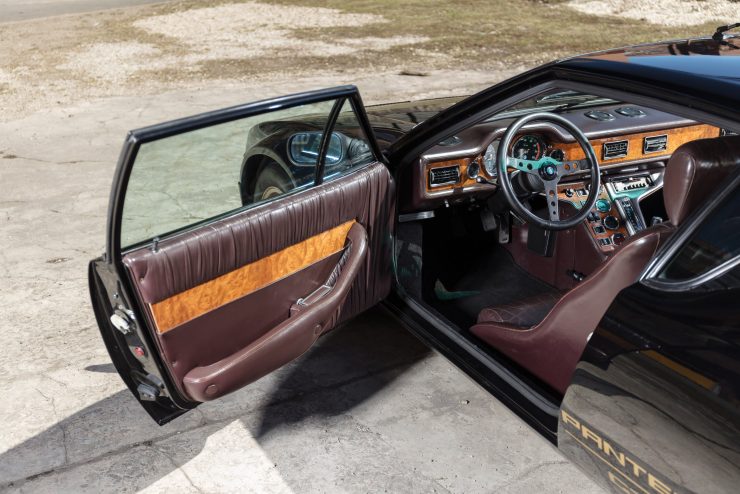 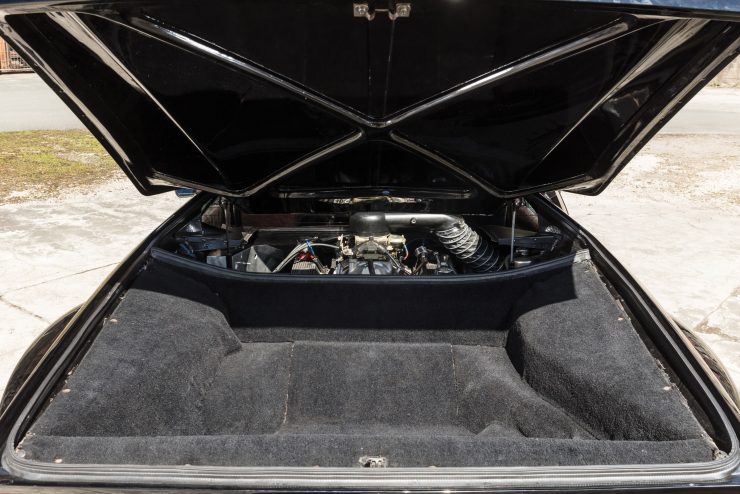 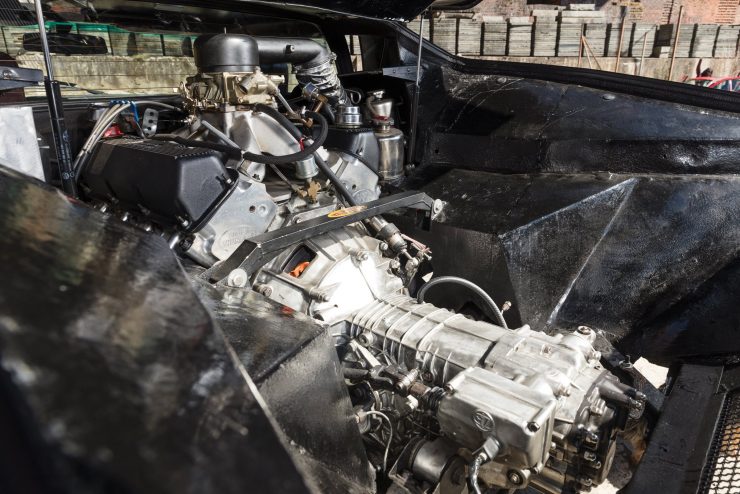 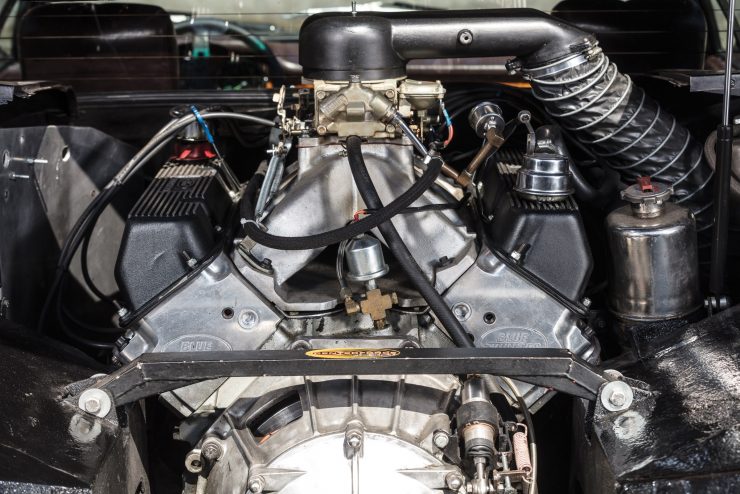 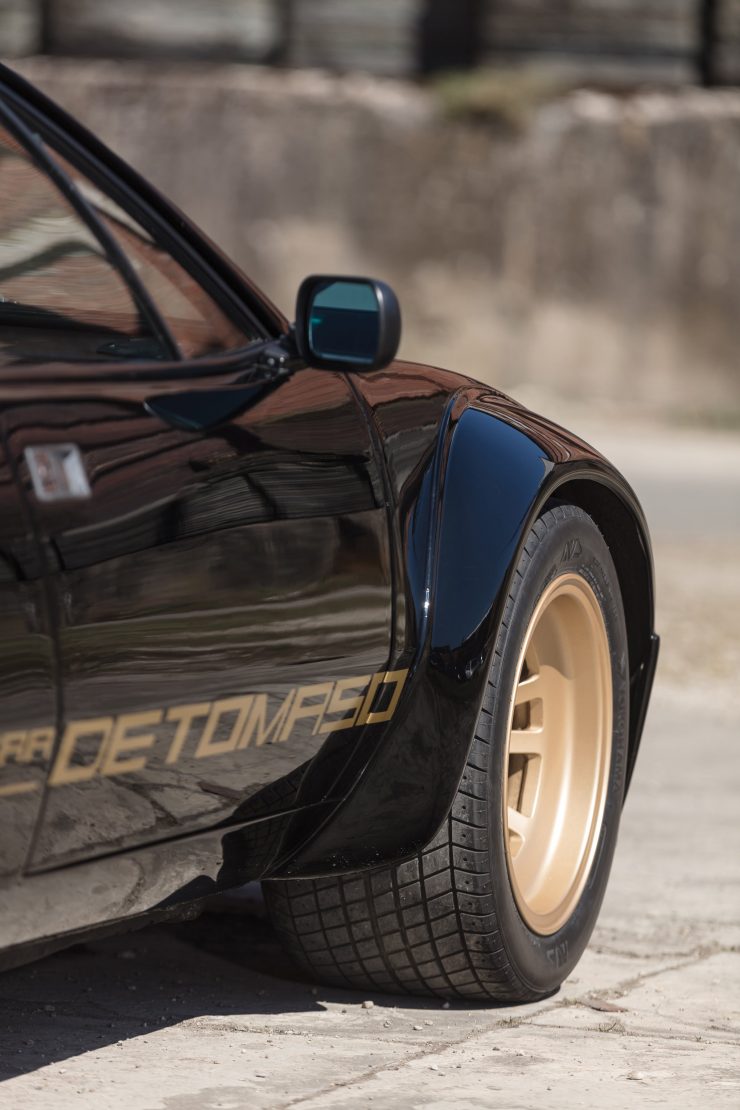 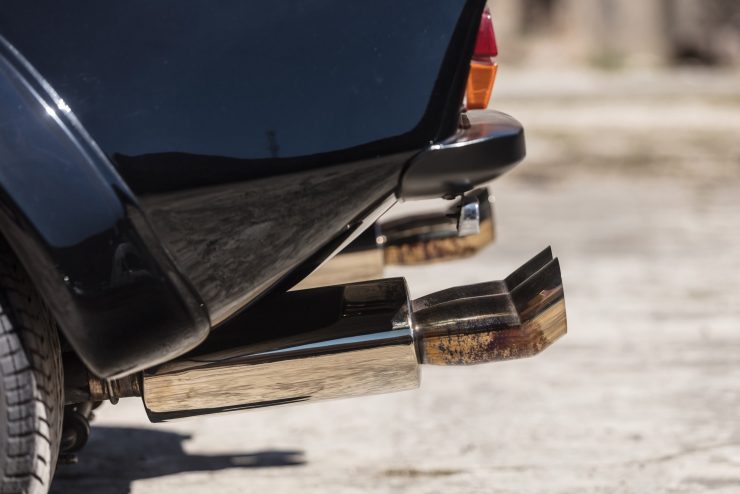 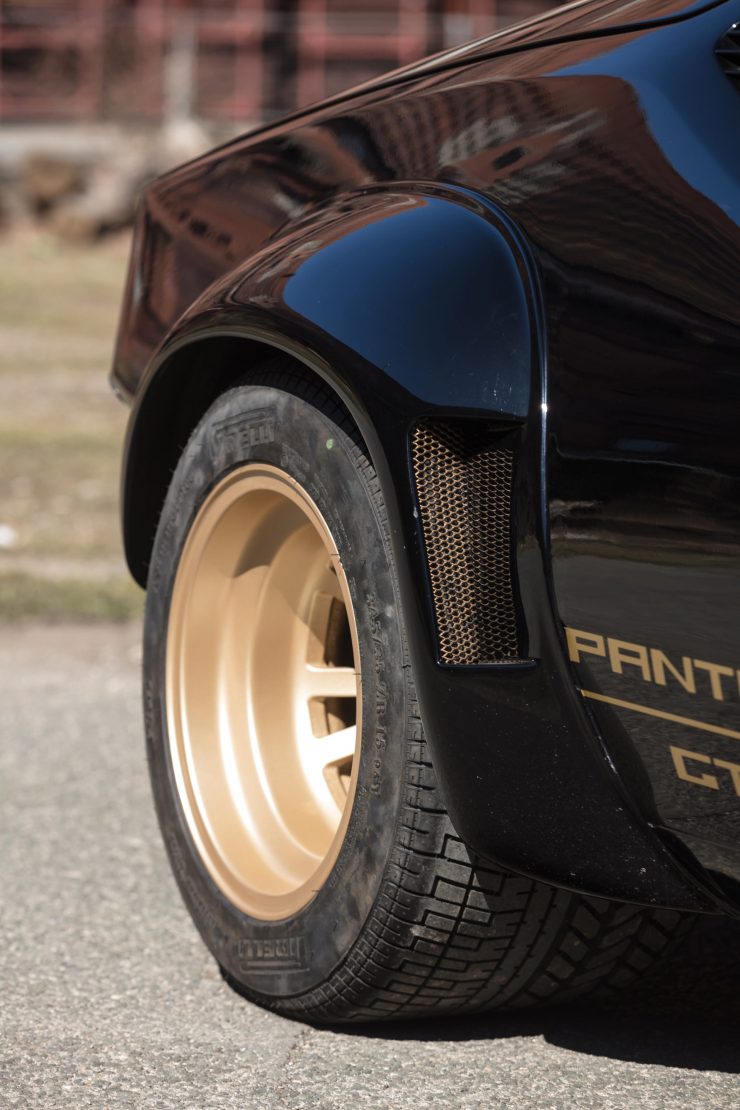 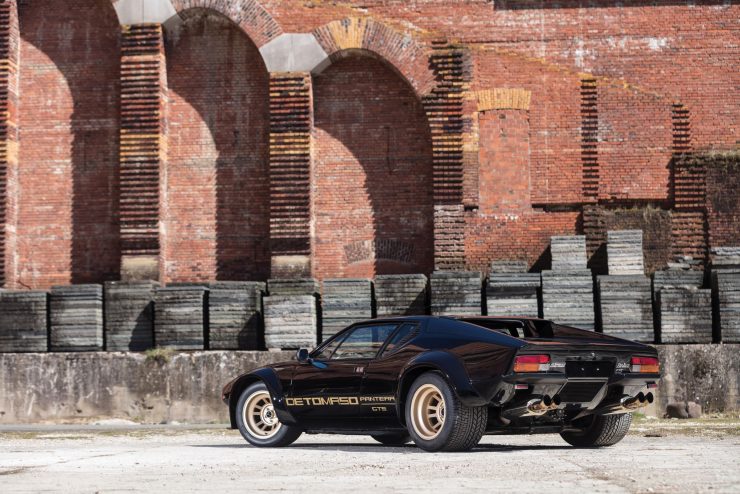 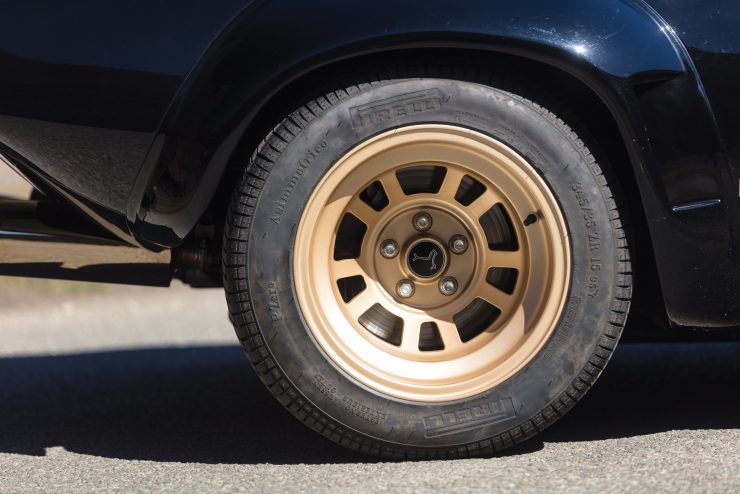 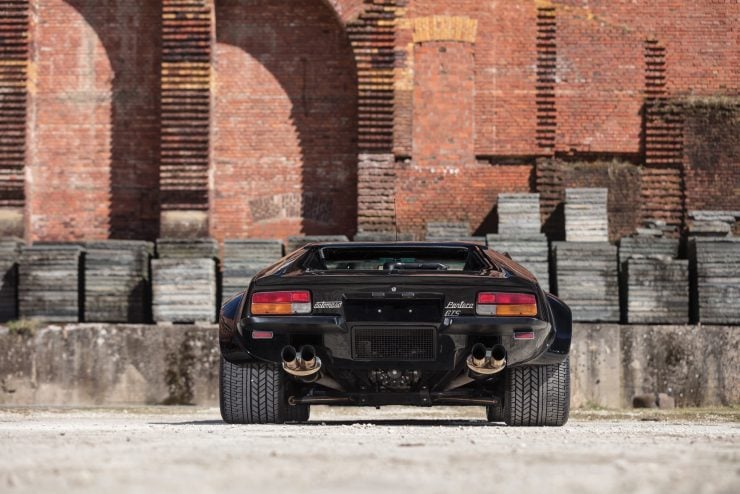 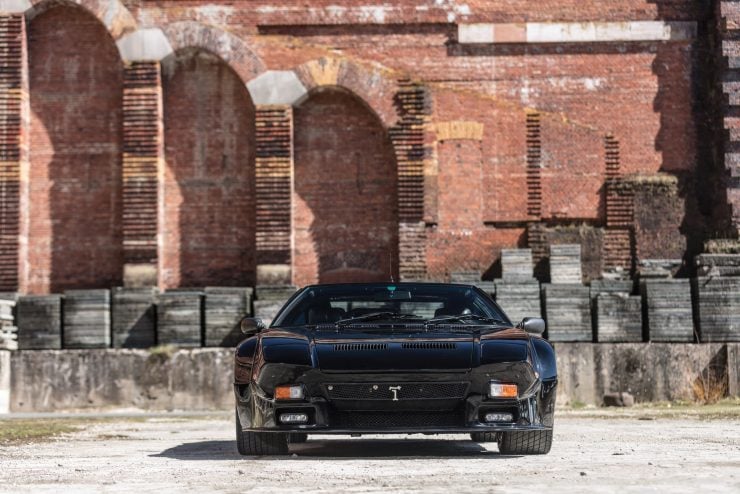