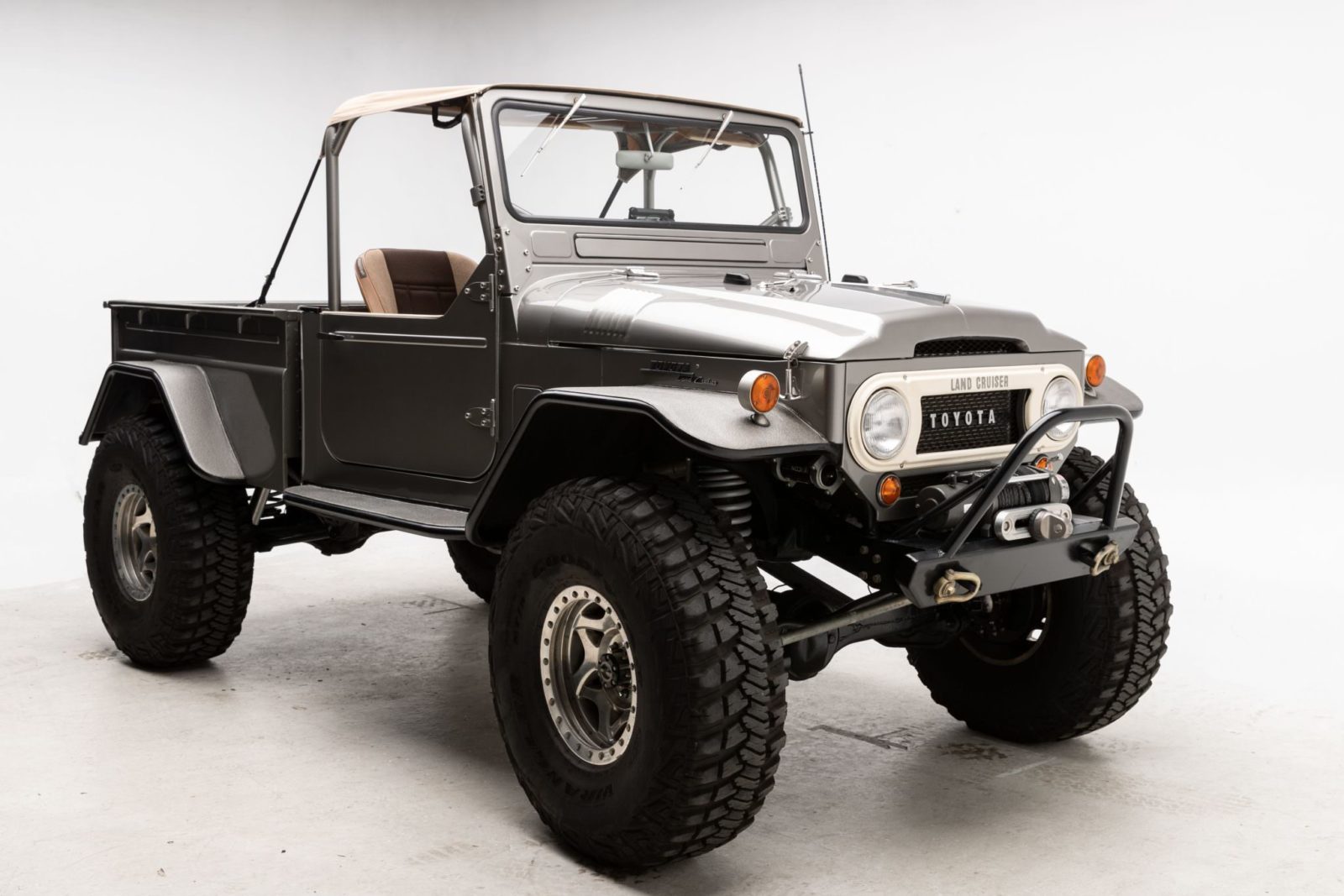 This vehicle started life as a 1964 Toyota Land Cruiser FJ45, in more recent years it was rebuilt and it now rides on a Land Cruiser 80-series chassis with uprated suspension, and it’s powered by a 4.7 liter 2UZ V8 from a 2001 Toyota Tundra.

We haven’t seen another FJ series quite like this, it maintains its Toyota heritage but benefits from a more modern chassis, much improved suspension and brakes, and of course it’s all powered by a vastly more powerful Tundra V8.

From its roots as a Jeep clone during WWII the Toyota Land Cruiser has risen to become one of the most respected four-wheel drives in the world. No other vehicle in the world can truthfully claim to be the ride of choice for both upper-middle class soccer moms and Middle Eastern warlords. 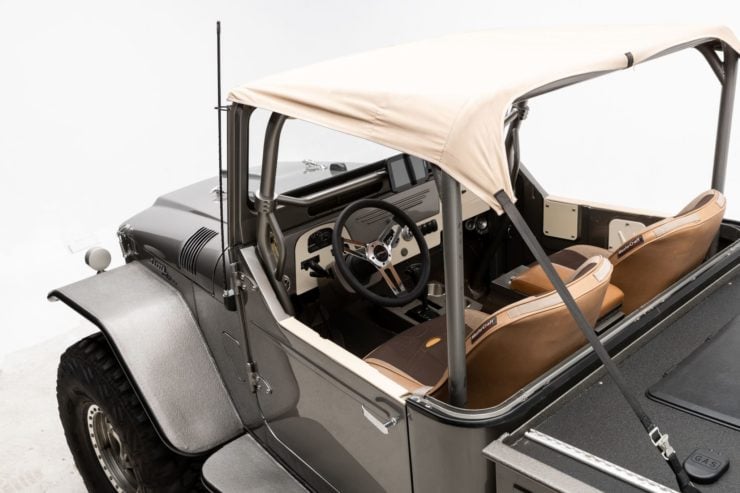 This vehicle comes with both hard and soft tops, and the interior has been completely customized.

Toyota first released the J40 back in 1960 as a replacement for the outgoing J20 series, it would grow to become one of the most recognizable 4x4s in the world and it would stay in production for an astonishing 40+ years.

Today we’re seeing a surge in interest around classic four-wheel drives and as a result their values have been skyrocketing. It was once possible to buy old Land Cruisers, Land Rovers, Broncos, Scouts, and Range Rovers for peanuts, but now they can sell for low six figure sums.

Although there are many other historically significant Japanese four-wheel drives the J40 series is still king of the hill, and it’s still influencing Toyota product design today over 60 years after it was first offered for sale.

The FJ45 you see here has been significantly modified from its original form – in fact it’s now essentially made up of parts from three distinct generations of Toyotas. 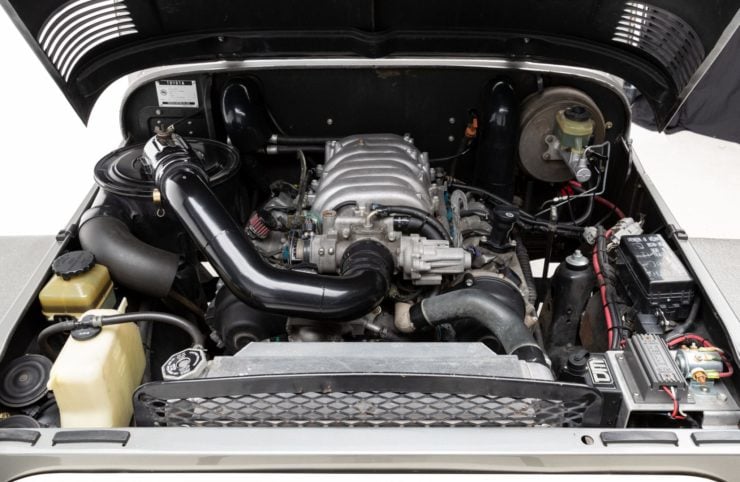 This FJ45 is now powered by a 4.7 liter 2UZ V8 from a 2001 Toyota Tundra with a matching 4-speed automatic transmission.

The project started with a 1964 Toyota Land Cruiser FJ45 that the owner had kept for over 25 years. He sourced a Toyota J80 series chassis for the build and the 4.7 liter 2UZ V8 from a 2001 Toyota Tundra with a matching 4-speed automatic transmission.

The chassis of the J80 is a notable upgrade over the original J40 chassis, it’s more modern, it’s stronger, and it has coil springs rather than leaf springs – potentially offering a better ride and perhaps more importantly, better wheel articulation where driving off-road.

The body was removed from its original chassis and stripped of paint, then repainted in DP90 primer and painted in two-stage Antique Sage Pearl. The bed was shortened 18 inches and a pair of steel half doors were fabricated.

This new set up made a power steering system highly advisable, and so a new hydraulic system was added which included a 105 series Land Cruiser steering box. 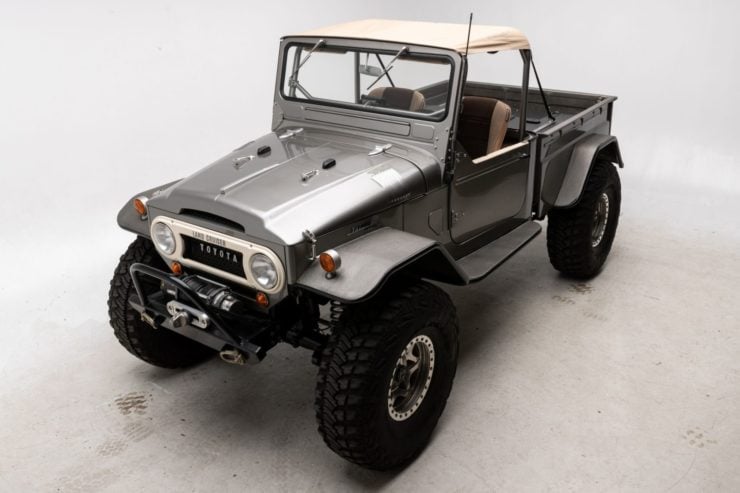 Disc brakes were fitted at all four corners, capping the chromoly axles, and the differentials are fitted with 5.29:1 gear ratios. The four-speed automatic transmission sends power back through a a Marks part-time four-wheel drive conversion kit with an air-shifted crawl box.

Both hard and soft tops come with the FJ40, and it’s fitted with custom front and rear bumpers, with a Warn 8,000 lb winch with a synthetic rope up front.

This eye-catching FJ45 is now for sale on Bring A Trailer, if you’d like to read more about it or register to bid you can visit the listing here. 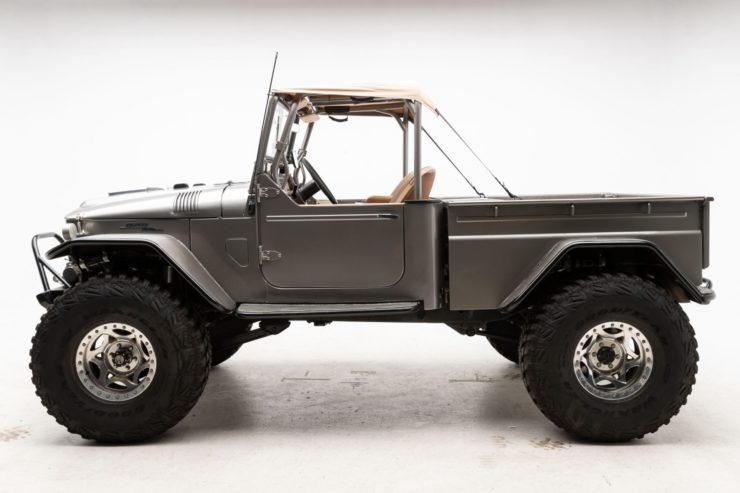 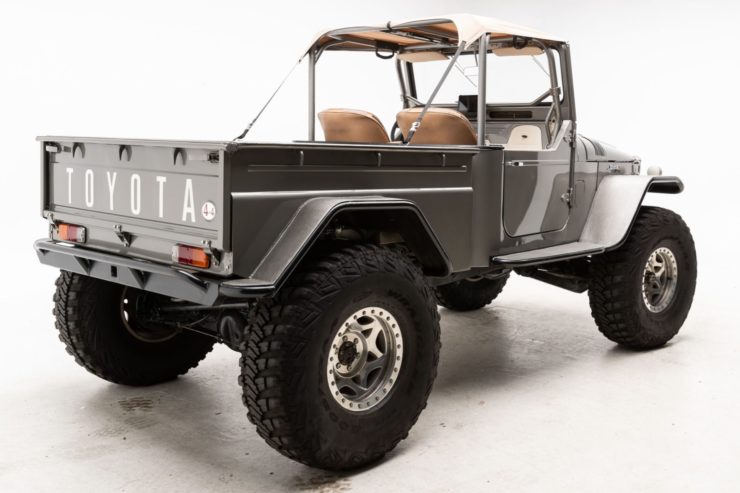 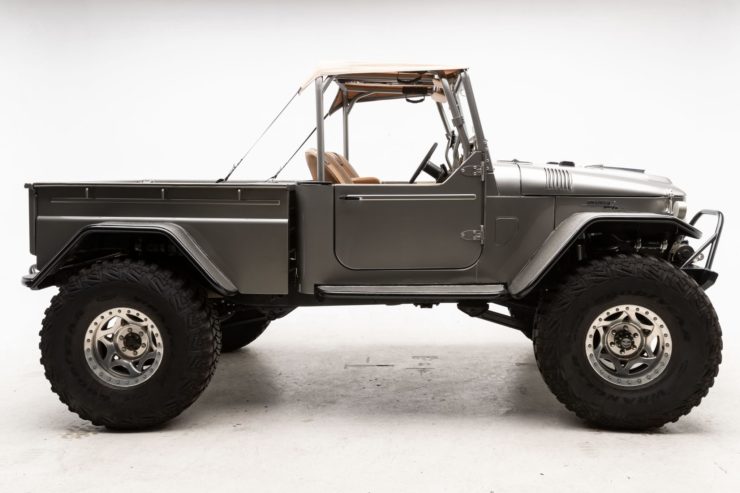 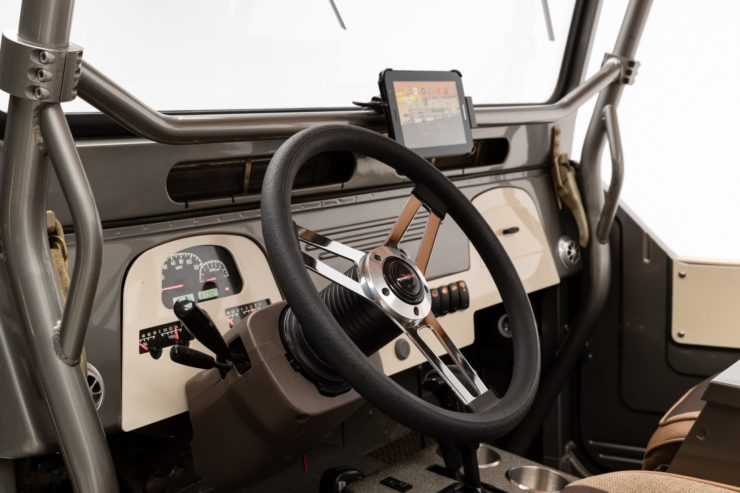 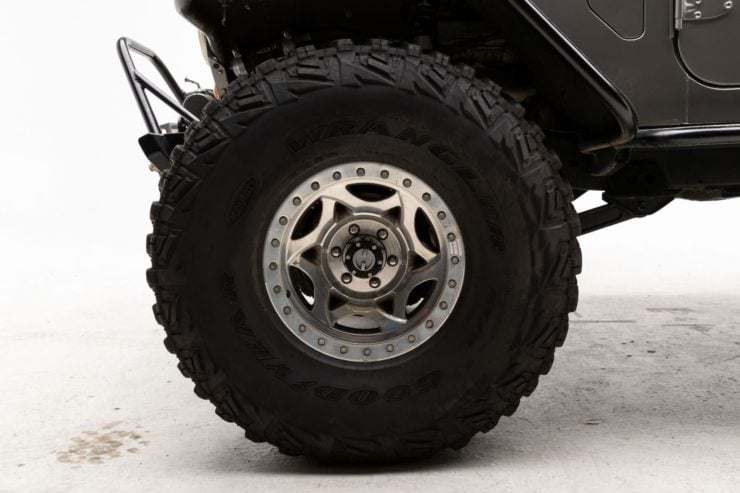 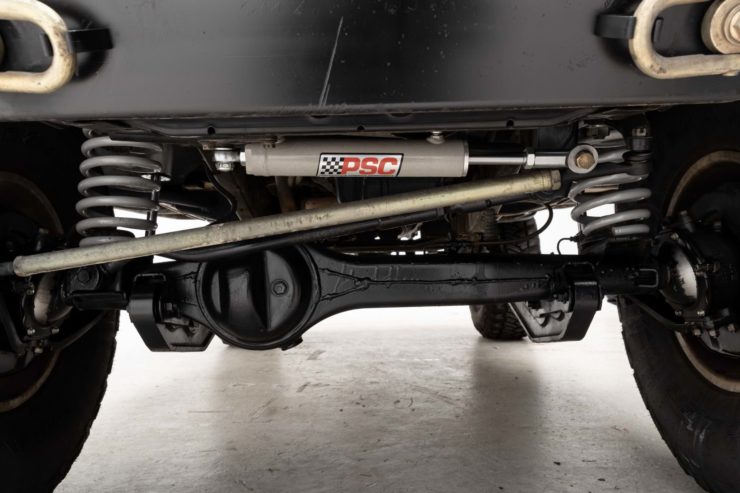 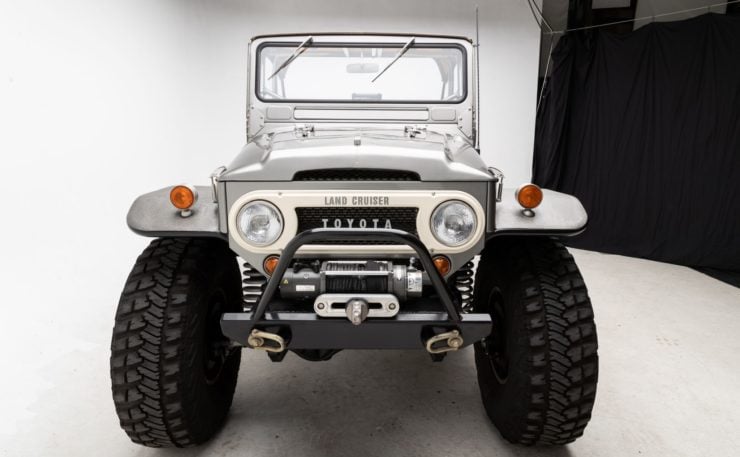 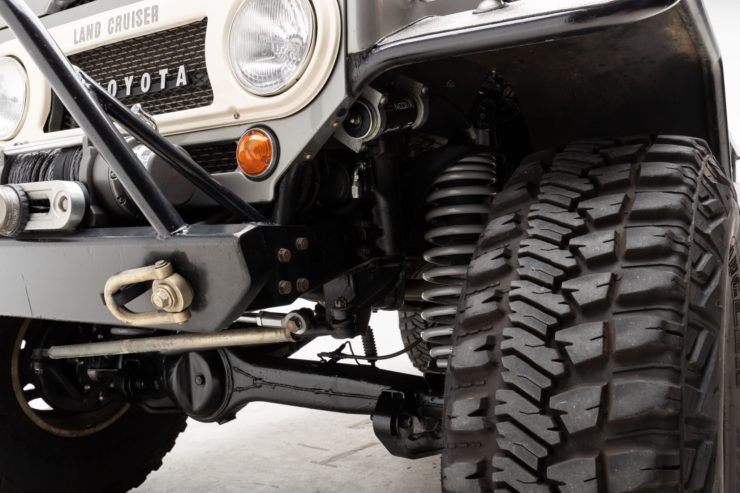 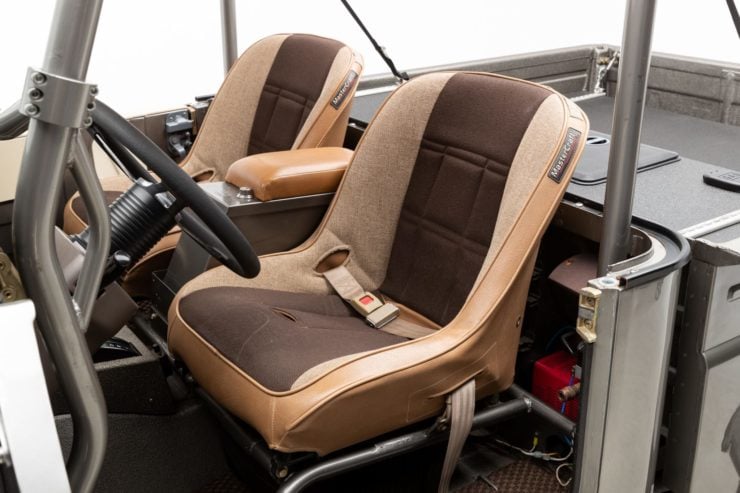 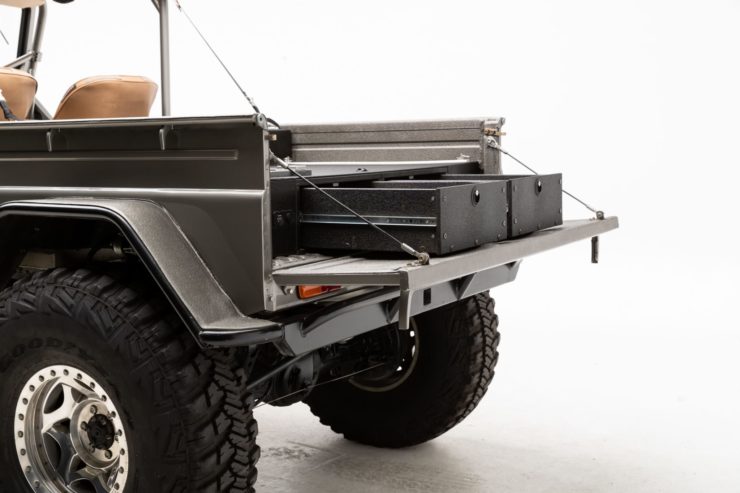 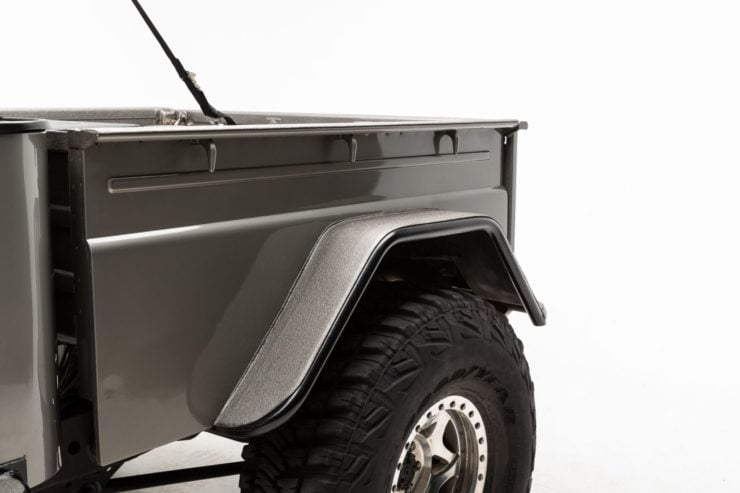 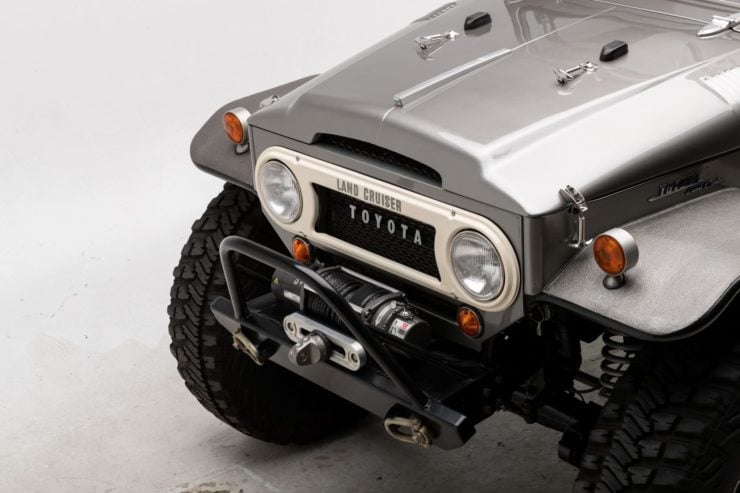 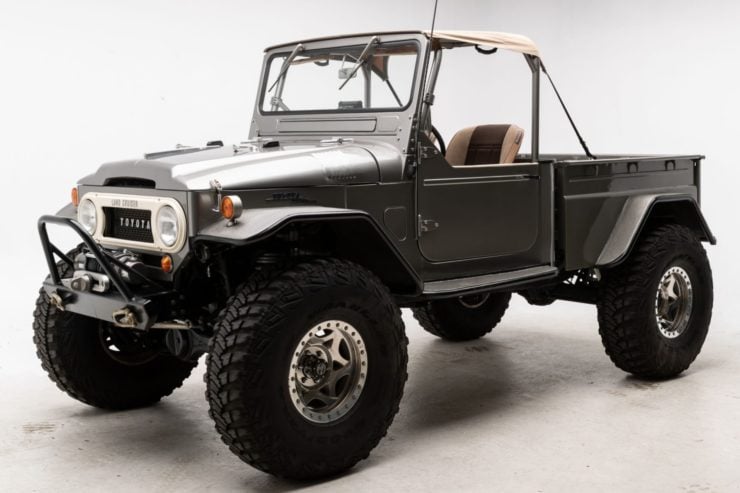 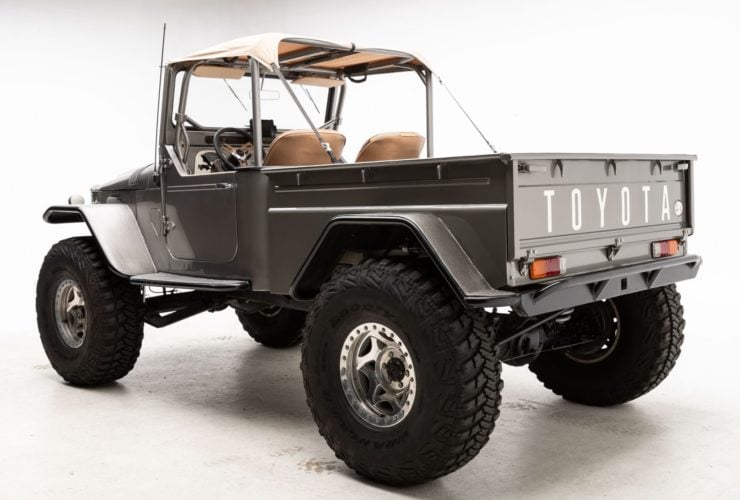