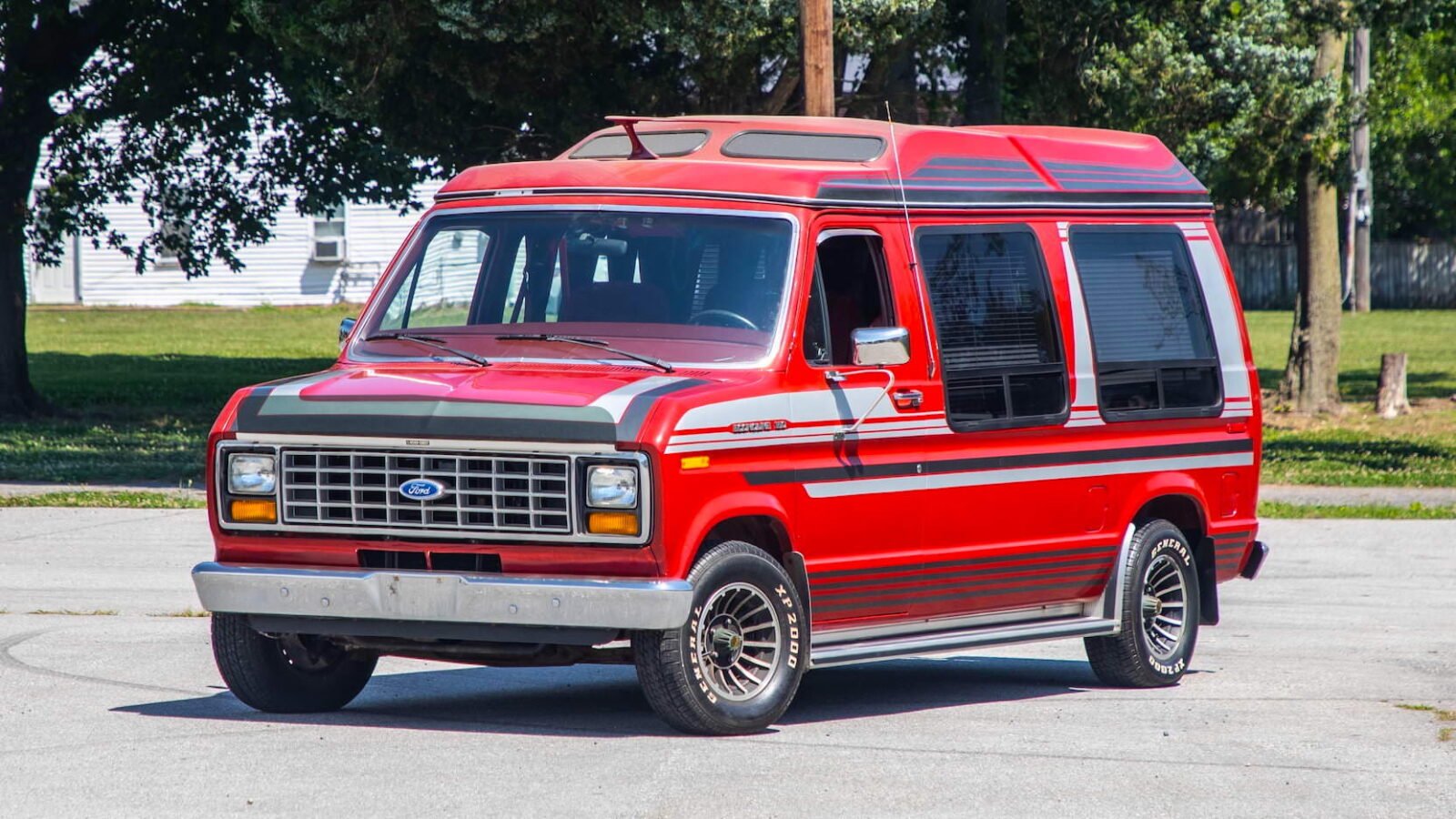 This is a 1987 Ford Econoline van that’s been equipped for prolonged road trips, or as they call it nowadays, “Vanlife.”

Original surviving examples from the golden era of custom vans are increasingly rare, they’re also increasingly sought after by enthusiasts and collectors.

The Ford Econoline And Vanlife

The 60s, 70s, and 80s were a time when vans really came into their own, from the hippie movement and its association with the VW Kombi van, to the wild custom velour vans of the 70s, and the A-Team van of the 1980s. Vans became just as much a part of custom automotive culture as cars, trucks, and motorcycles.

The Ford Econoline was designed in the late 1950s and introduced in 1960, it was intended to compete with the VW Transporter/Kombi and the Chevrolet Corvair 95 van. In the years since the Econoline, now the E-Series, has become second longest running model in Ford history after the F-Series trucks.

The 1987 Ford Econoline you see here is from the third generation of the model family that was introduced in 1975 and sold until 1991. Unusually for a van it used body-on-frame construction which made it ideal for conversion into ambulances, small busses, and even trucks. 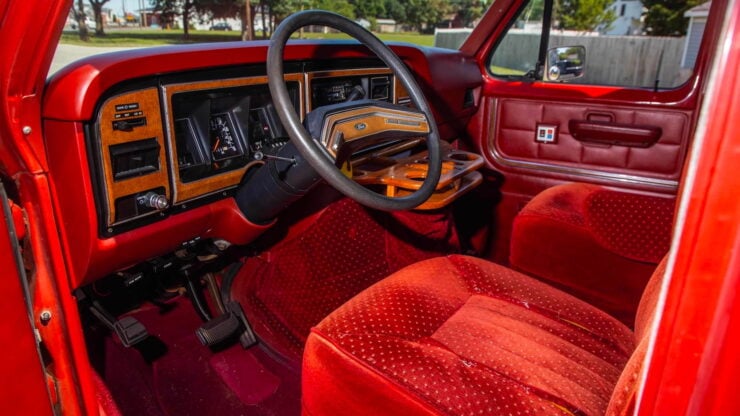 Above Image: With acres of red velour this is a quintessentially 80s custom van.

During the 70s and 80s “Conversion Vans: became popular in the United States and around the world. These were vans that were either sent away to be converted by specialist companies or converted by amateurs in their own garages.

Conversion Vans could be built to just about any specification you can imagine, from extended wheelbase limousine vans to fully equipped camper vans with their own jacuzzi – it’s all been done at least once.

Skipping forward to the 2010s and into the 2020s and vans are taking centerstage once again as an entire generation embraces vanlife and sets out for adventures of their own.

Modern custom vanlife vans are typically far more utilitarian than their ancestors from the 70s and 80s, perhaps a little more like the hippie vans of the 1960s. That said there is huge variety as always, and some modern van rebuilds are just extraordinary.

The van you see here is an Econoline from 1987. It benefits from a number of upgrades including a high roof conversion with windows at the front for additional light in the back. 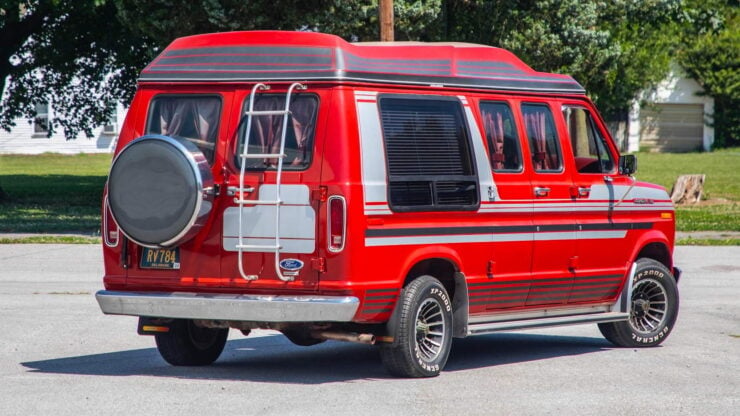 Above Image: The van has large curtained side windows and entry is by side and rear double doors.

This Econoline is powered by a fuel-injected 5.0 liter Ford V8 engine sending power back through an automatic transmission to the rear wheels. It also has power steering and power brakes, cruise control, power windows, and an overhead console with a CB radio.

Inside the van you’ll find red carpeting, a red dashboard, and ample red velour throughout. I secretly suspect that at least 80% of global velour output during the 70s and 80s was used by people building custom vans just like this one.

Frustratingly the main rear section of the van isn’t pictured or described in any way. Right at the back of the van inside the double doors there’s a rack for hanging clothes and we can see the back of a seat, so it’s possible this seat folds down to make a bed – however there’s no way to know without seeing it.

If you’d like to read more about this unusual van or register to bid you can click here to visit the listing on Mecum. It’s due to roll across the auction block in late July and at the time of writing there’s no price guide listed. 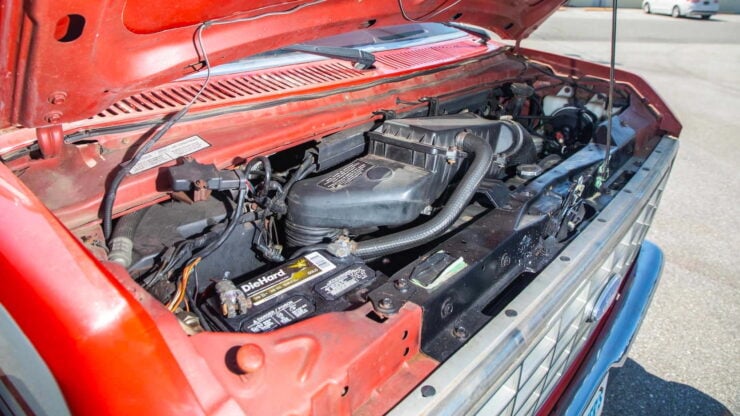 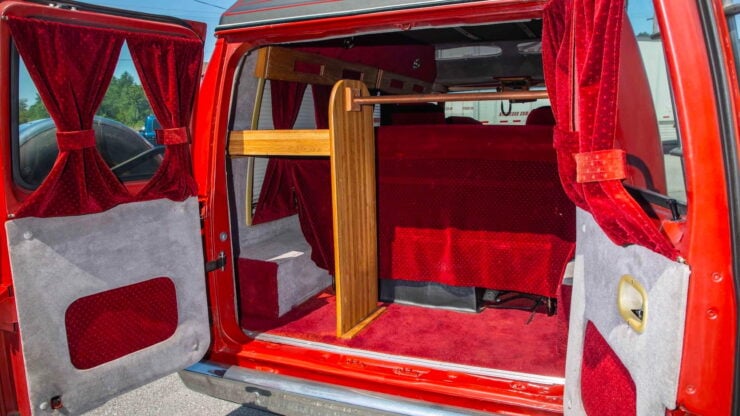 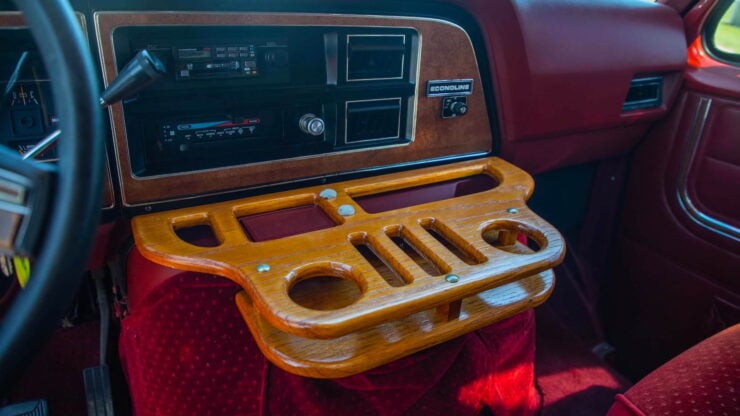 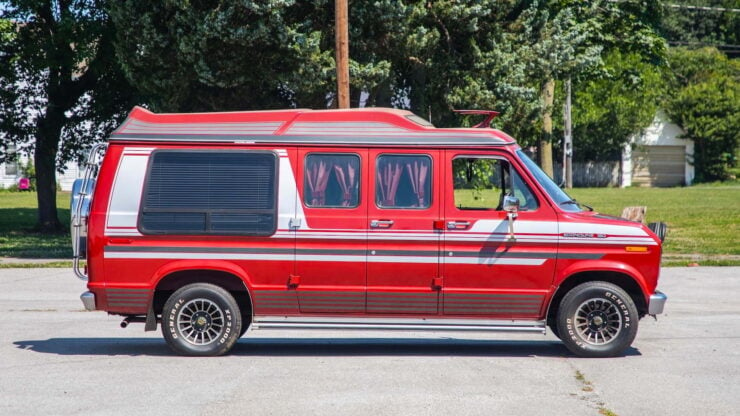 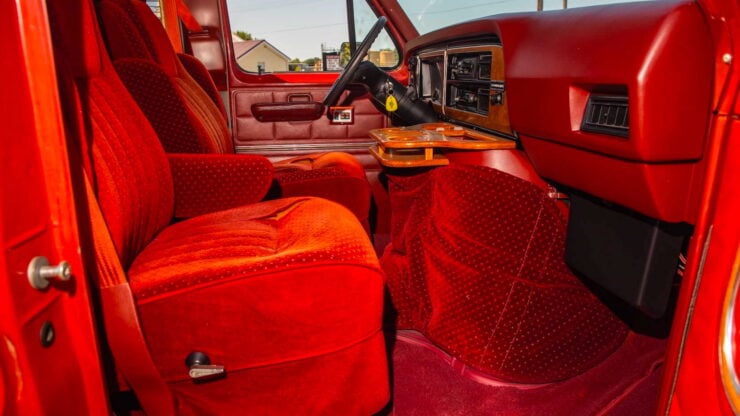 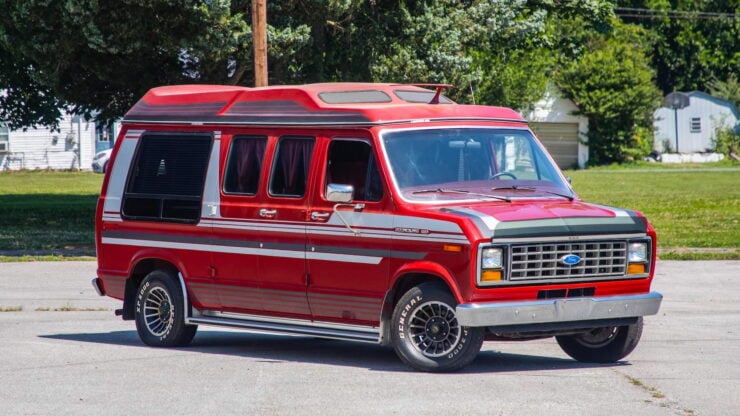 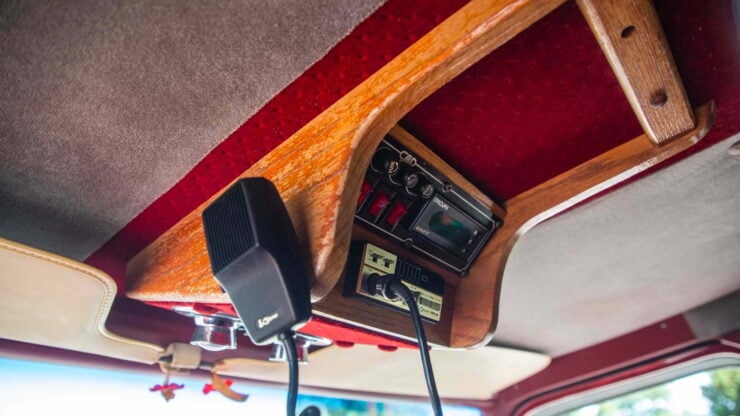 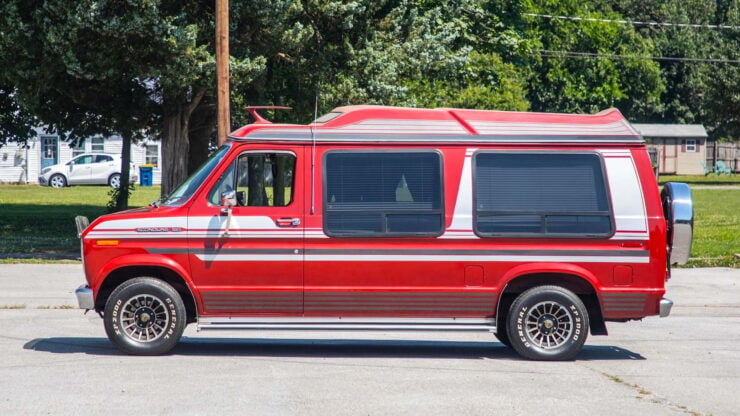