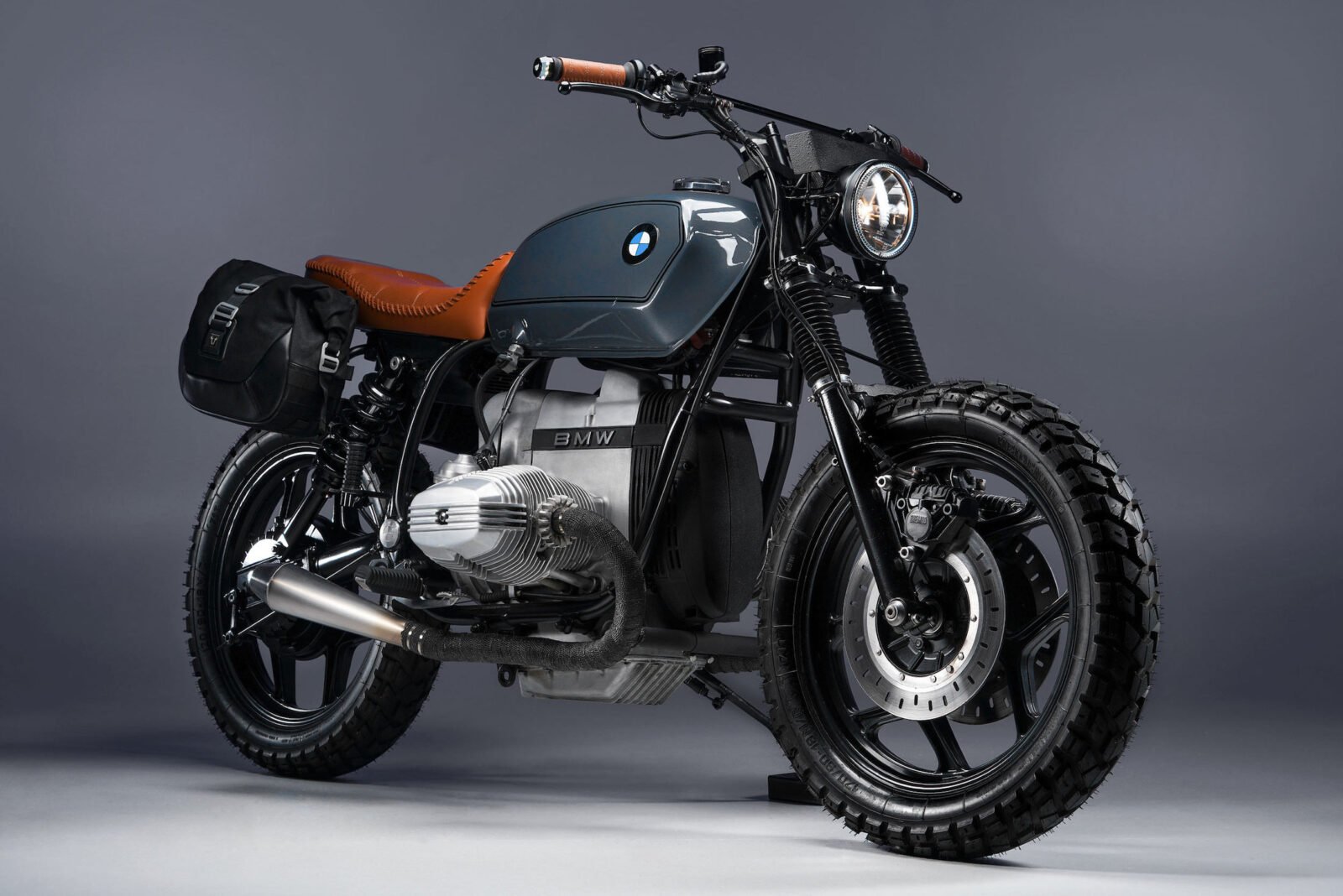 This post was written by Mike Gustafson at Monnom Customs. When possible we like to bring you the story of a custom motorcycle in the words of the people who built it, to cut out the middle man and give you direct insight into their methods and reasoning.

I love vintage Japanese motorcycles, Hondas from the 1970’s to be exact. When a new client with a 1987 BMW R80 approached me about building a café racer my first reaction was to decline. He was very persistent and eventually I caved and excepted the commission. And, I’m so happy that I did.

We began this project with a sleek, minimalist café racer in mind but the build quickly took a turn into realm of tough tracker as the client shared his desires for comfort, storage and set of fat Heidenau tires.

He also had a longing for the iconic Nimbus Grey Audi TT and he hoped that we could use these styling cues in the build. I’m personally not a fan of laying out all the color and upholstery details of a build so early on, I’m more of a “see where the bike takes us” kind of person as things seem to change so much throughout a custom bike build. But, this was his bike and his money and I actually kind of liked the fact that this all made me nervous. 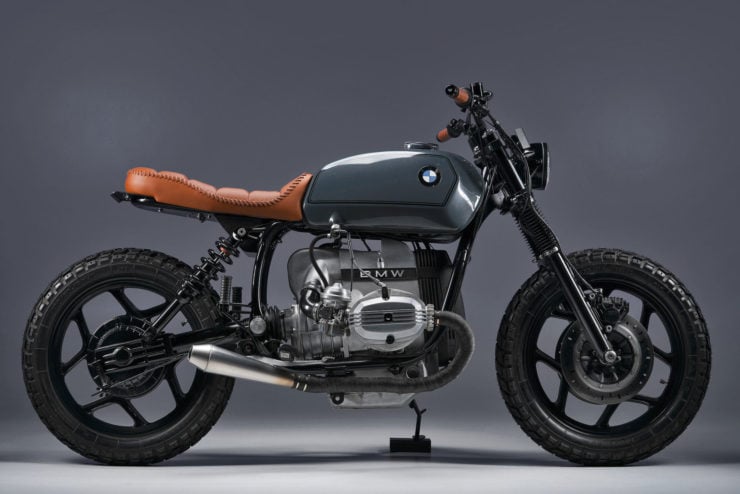 The original 1987 R80 monoshock was a bulky touring beast so my first job was tearing everything down to the essentials, the frame, motor and two wheels. We sourced a slimmer 4 gallon gas tank and that was the starting point for all the major fabrication. I made a custom two up seat frame and pan and relocated a fresh set of passenger foot pegs.

The front end of the bike stayed mostly intact as far as the suspension goes but I fabricated a new headlight assembly and speedometer mount for the slim Trailtech digital speedo. On the rear I installed a new Progressive rear monoshock and fabricated an underseat electronics tray to house a large lithium ion Antigravity battery and a Purpose Built Moto Black Box electrical system.

The seat and back end of the bike were tailored around a set of repurposed SW Motech bags that include an ingenious quick release mounting system. The beefy 130mm Heidenau tires were installed onto the stock rims and they really gave the bike the stance that we were looking for.

The unique leather seat upholstery was left to the custom master Dane Utech of Chicago, I supplied him with plenty of Audi TT reference photos and we worked together on making sure the scale of the upholstery design was the right translation for the size of the seat and feel of the bike. He created a masterpiece with the leather whipstitching and the chunky textured foam.

We also added a set of custom leather wrapped grips to the project to pull everything together. The paint is color code correct to the Audi, a dark grey with a small amount of pearl. The tank was topped off with BMW appropriate pinstriping and a fresh set of badges. Brandon Walker of Walker’s Way Custom Paint took on the task and he also knocked it out of the park. 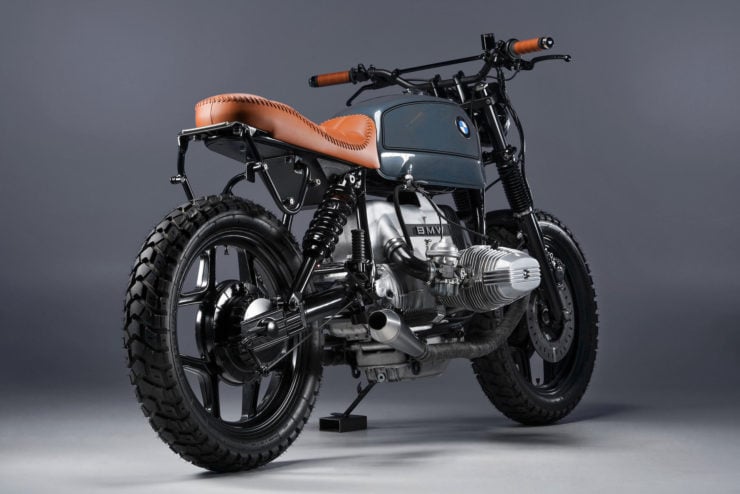 The freshly painted gloss black frame was offset by the use of textured 2k Raptor Liner on the underside seat, rear taillight housing and front headlight guard. The textured bedliner added a nice touch of toughness to the refined tank paint and leather upholstery.

I made a new set of exhaust pipes utilizing the stock headers and a new pair of Cone Engineering mufflers, the pipes were wrapped to fit the mood and raw style of the build and I will tell you that this bike is one of the best sounding builds I have been a part of. However it was a challenge to keep the mufflers high and tight while still keeping space for the stock footpegs and the new passenger pegs.

Upon my first test ride of the 800cc opposing twin cylinder R80 I was sold on the platform. This build is by far the most fun I’ve had on a motorcycle around the city. The sound is primal and the torque is unreal. The bike handles great and is a sheer joy to ride. Once this bike was delivered I found myself longing for the refined crudeness of that engine.

I will admit that I have been thinking about selling a Honda or two to aquire one of my own. 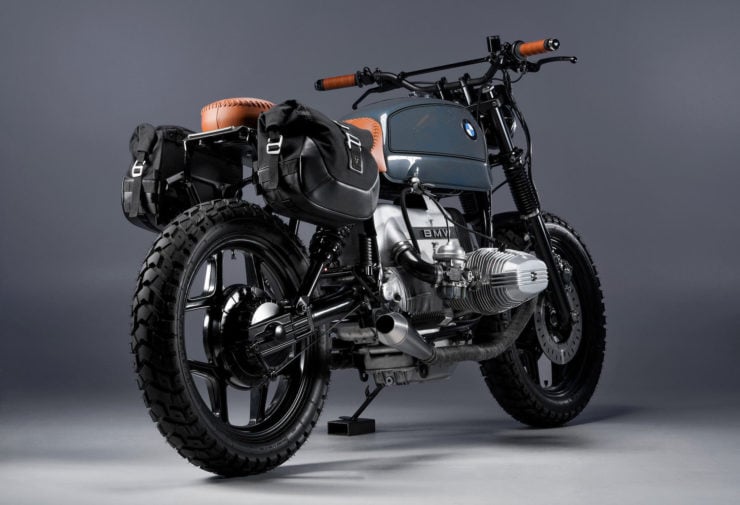 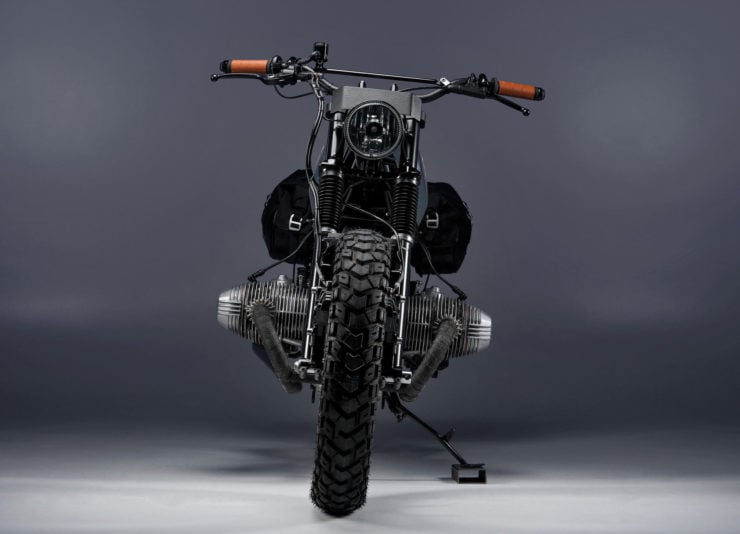 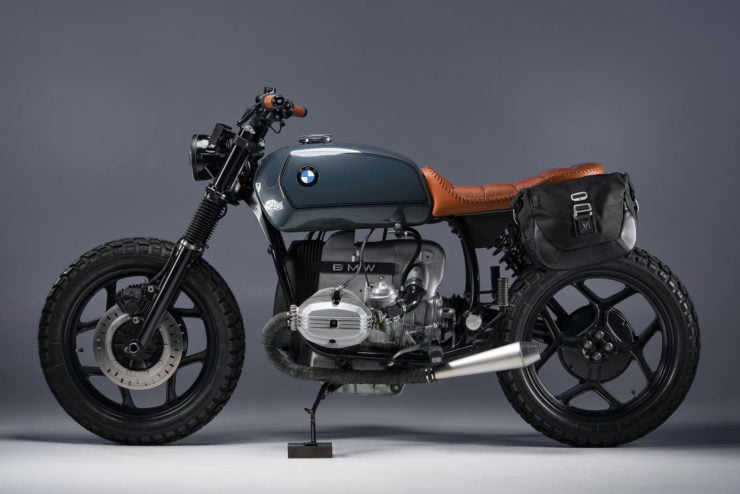 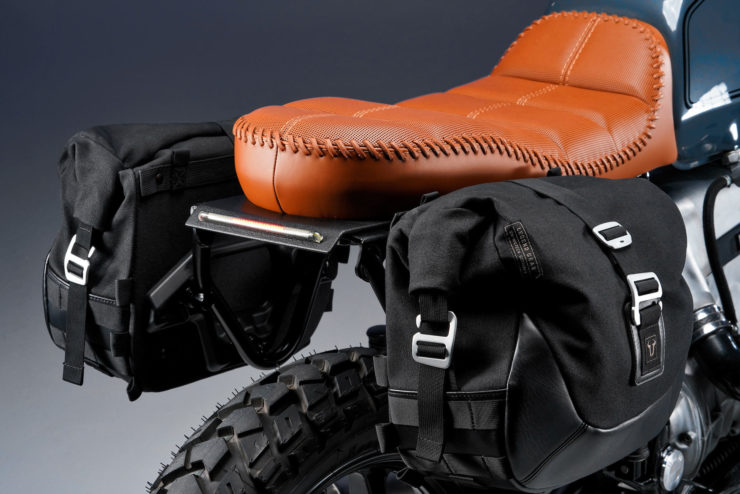 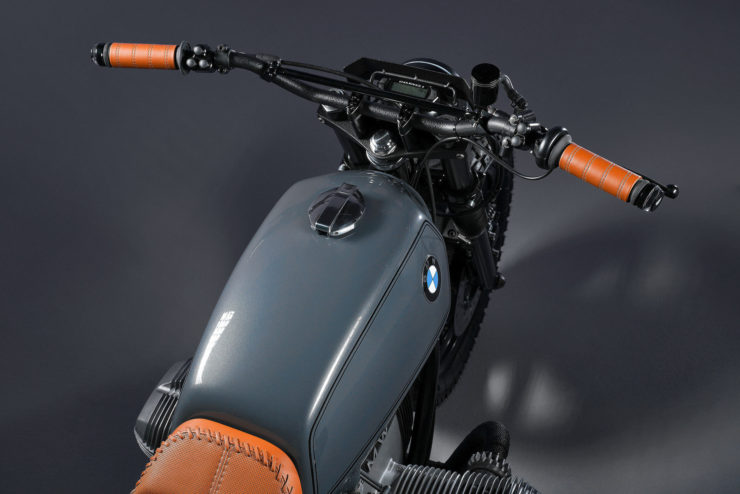 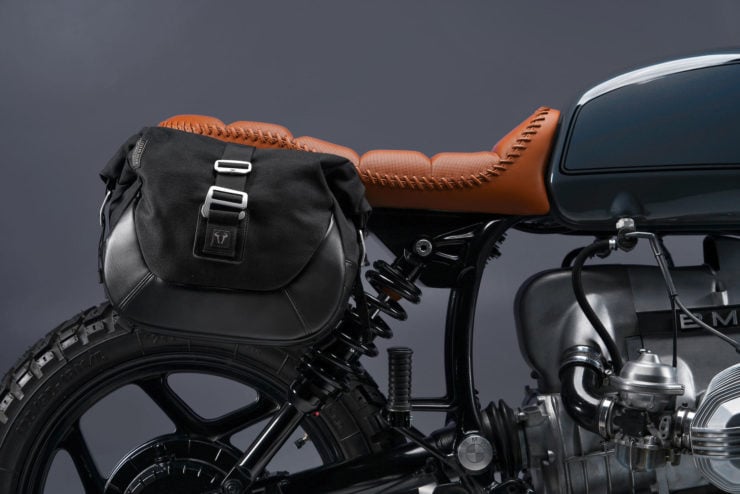 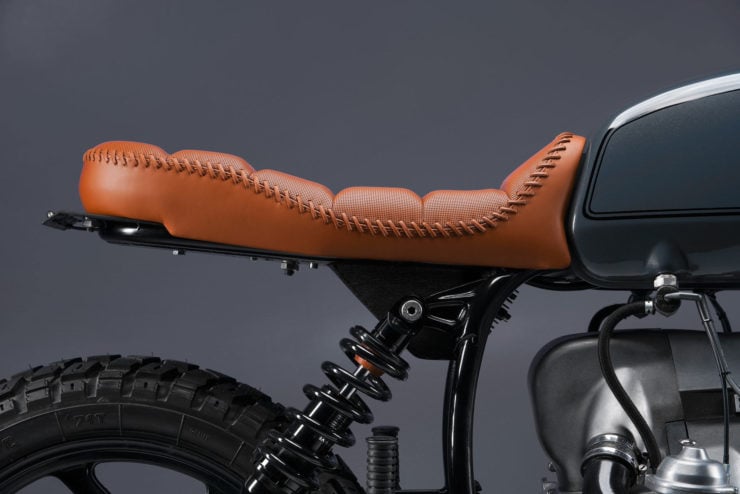 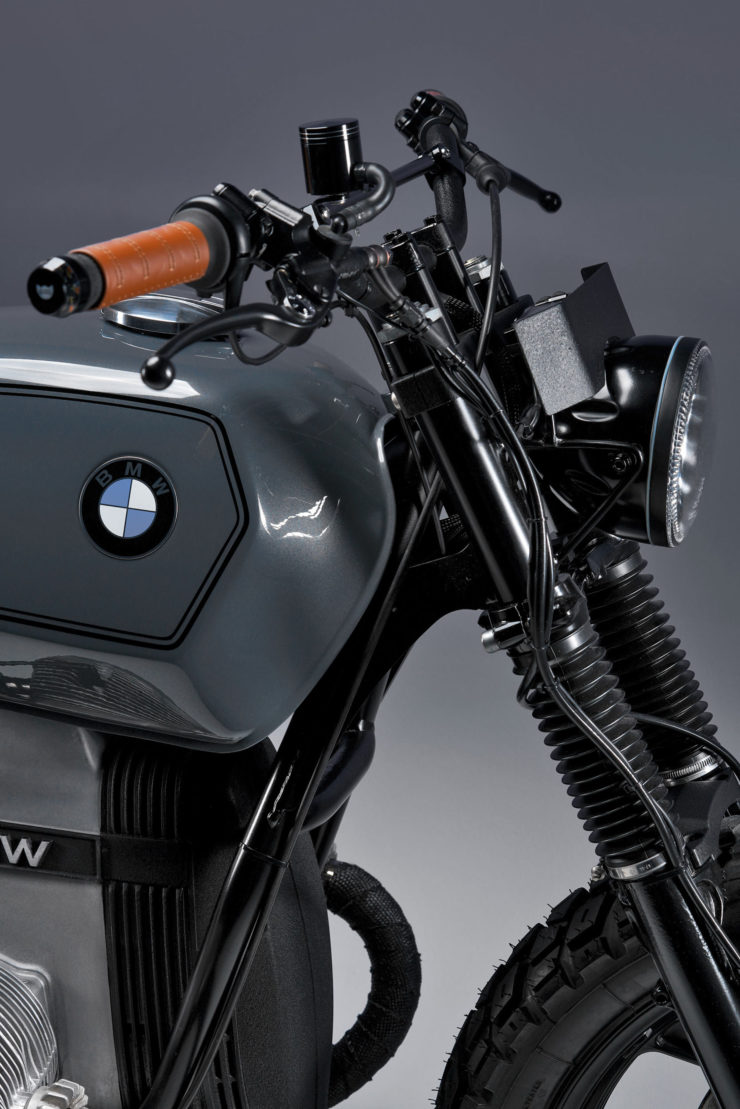