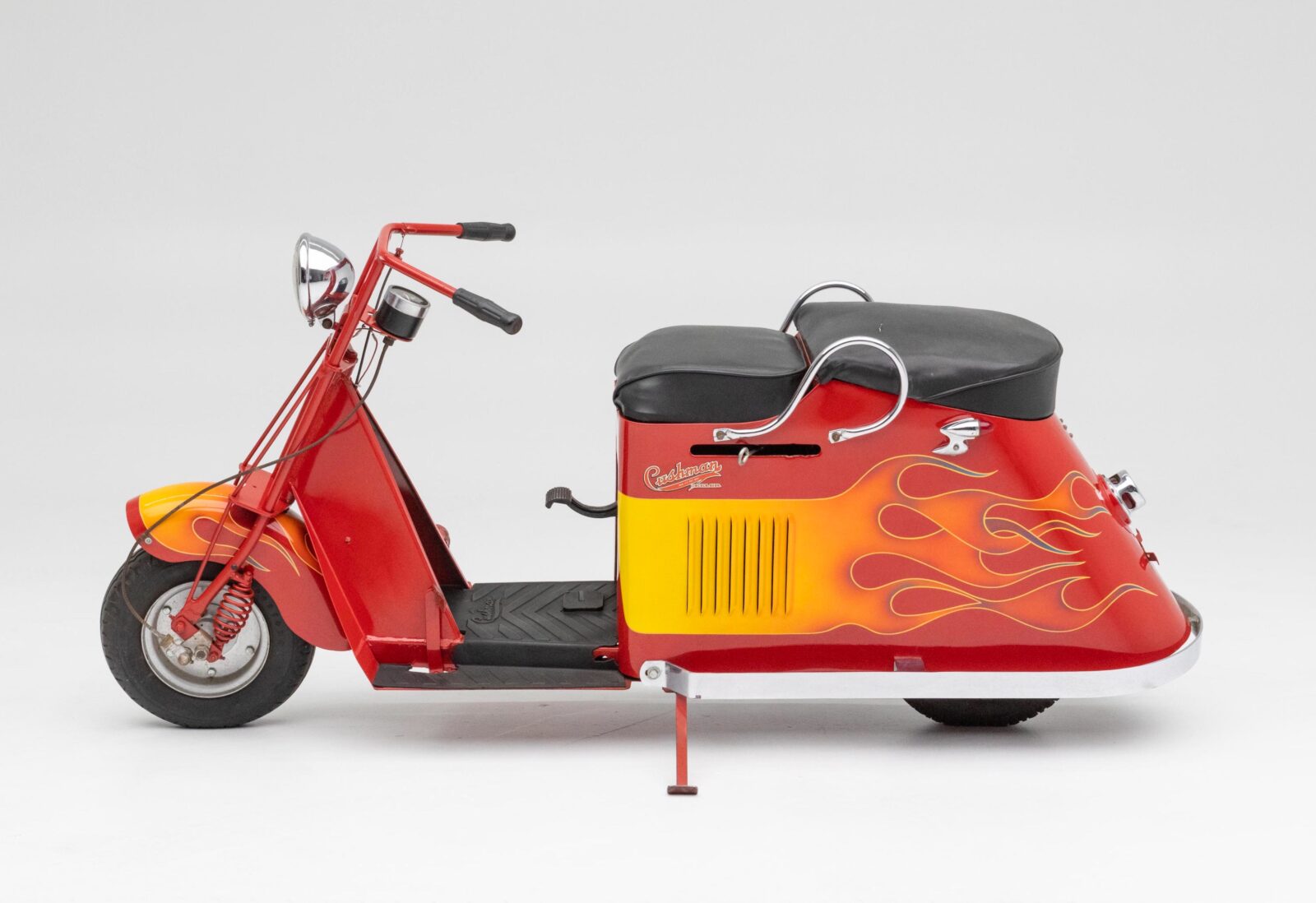 The Cushman Series 60 is an American-made scooter from the mid-20th century that would become the first form of motorized transportation for countless young Americans from coast to coast.

Whereas over in Europe the names Vespa and Lambretta became synonymous with inexpensive two-wheeled transportation, it was Cushman that gave this same inexpensive gasoline-powered freedom to Americans who wanted the convenience of a motorcycle without the cost or complexity.

✱ Cushman scooters were first sold during The Great Depression to help keep the company afloat.

✱ They became wildly popular as affordable means of transport, and they were used extensively by the US military during WWII.

✱ A special version was developed to be air dropped with paratroopers behind enemy lines, giving them the ability to cover significantly more ground than they would have been able to on foot.

✱ Classic Cushman scooters are now highly collectible and there are clubs across the United States to bring enthusiasts together, and to provide easy access to parts and expertise. 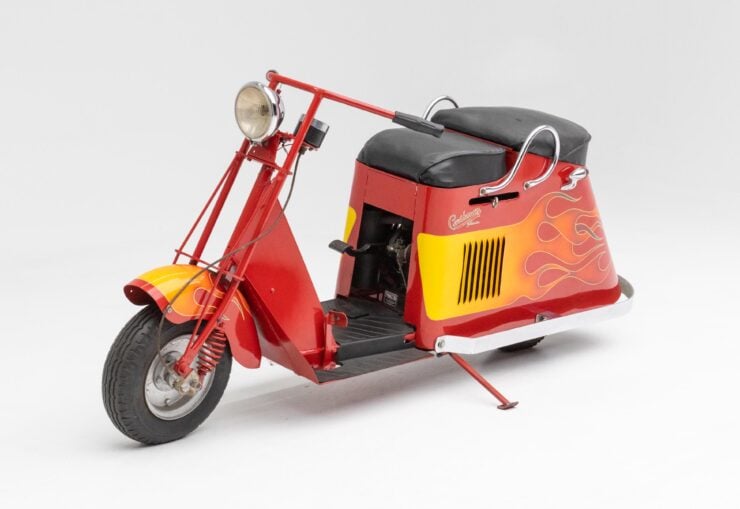 Above Image: The Cushman Series 60 has a distinctive rear cowling that earned it the nickname “Turtle Back.”

Cushman Scooters And The Series 60

The Cushman Series 60 scooters were affectionately known as the “Turtle Back” due to their design, they were easier to ride than motorcycles and their step-through design made them popular with men and women, The latter group found it was possible to ride them wearing dresses, which was significantly more challenging on a regular motorcycle.

Although Cushman is today probably most famous for their scooters and other small vehicles the company actually started out back in 1903 in Lincoln, Nebraska manufacturing small four-stroke gasoline engines. These engines were used to power farm equipment, pumps, lawn mowers, and even small boats.

It wasn’t until the midst of The Great Depression in 1936 that the company turned to scooter production as a way to stay in business. It was a stroke of genius, as Americans needed cheap motorized transport and Cushman already had a suitable engine in production – the Cushman Husky.

Cushman engineers developed a simple scooter design that was powered by their engine, they called it the Auto-Glide and it sold in significant numbers – enough to keep the company afloat. WWII would break out just three years later and the United States would join the war in 1941, Cushman developed a version of their scooter for military use and they were bought en masse to be used on military bases around the world.

One unusual Cushman scooter that appeared at this time was the Model 53, this was a simple lightweight scooter design that was developed to be airdropped by parachute with Army Airborne troops.

In the years after the war Cushman enjoyed a sales increase, possibly due to the fact that so many GIs had seen them being used on military bases, and the company released a line of new models designed to look like gleaming new Harley-Davidsons or Indian Chiefs like the Cushman Eagle and the Road King. 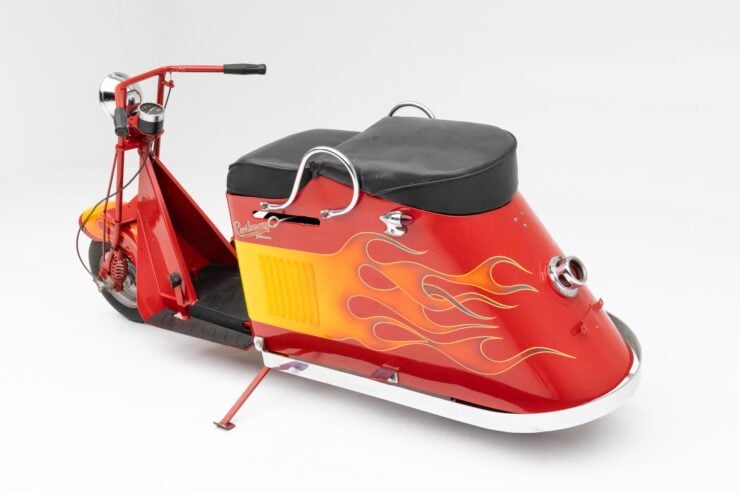 Above Image: The scooter has seating for two, an automatic transmission, and foot controls for throttle and brake.

The history of Cushman throughout much of the 20th century was a story of a company that kept needing to reinvent itself to stay in business, and this carried on after the war. By the mid-1960s scooter sales had dropped and so the company started building a variety of small three and four-wheeled vehicles for including golf carts, industrial vehicles, ice cream vans, police carts, and turf maintenance equipment.

The company remains in business today as a subsidiary of Textron, and they recently brought their classic scooters back into production due to popular demand.

The scooter you see here is an original vintage Cushman Series 60, as mentioned above this model is commonly referred to by enthusiasts as the Turtle Back. It has been previously restored and now wears an eye-catching flame paint job with a range of chrome parts.

The Series 60 was powered by a round block version of the Husky engine capable of 5 hp, it’s an air-cooled four-stroke engine that was used extensively by the company. This engine was mated to a simple automatic tramission with a centrifugal clutch (depending on model), and power was of course sent to the rear wheel.

This Cushman has been part of a museum display up until recently, so it will need recommissioning before it’s relicensed for road use. It’s being auctioned live at the time of writing with a price guide of $2,000 to $3,000 USD.

If you’d like to read more about this unusual American scooter or register to bid you can click here to visit the listing on Bonhams. 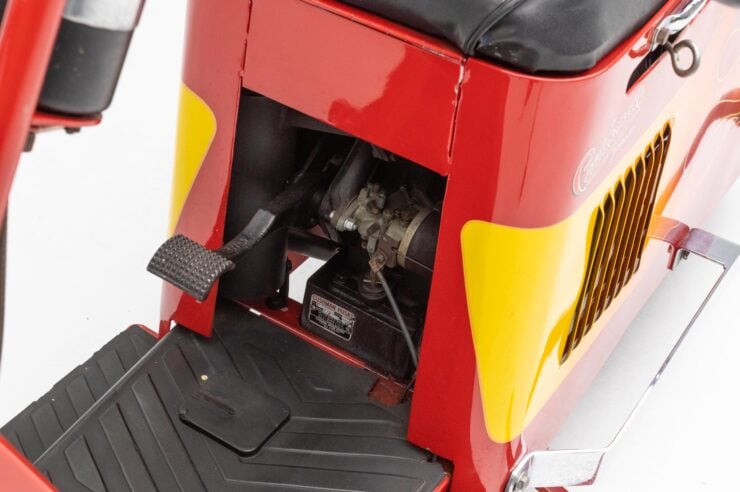 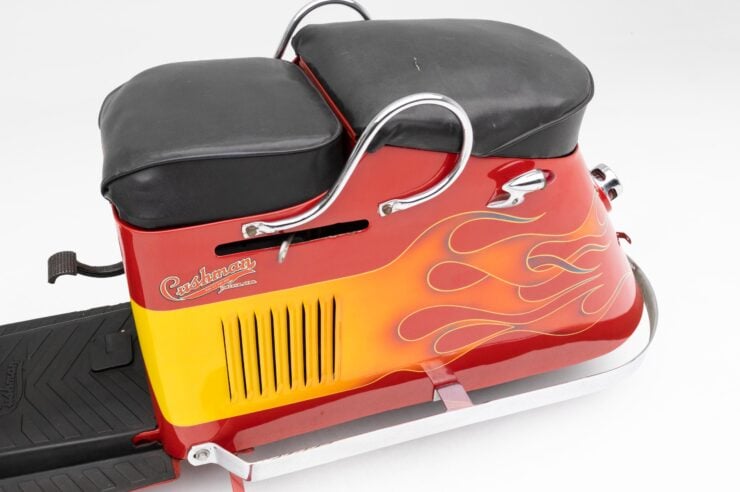 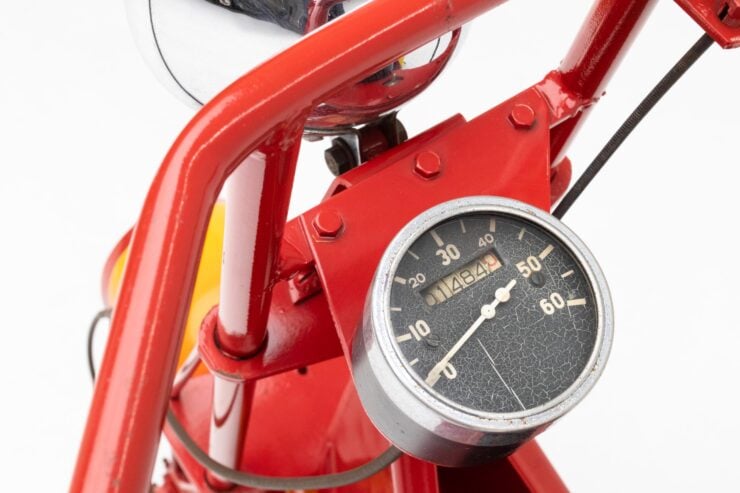 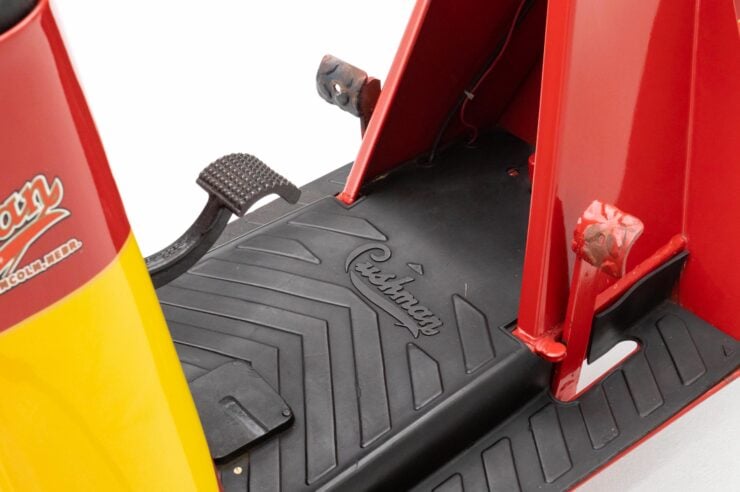 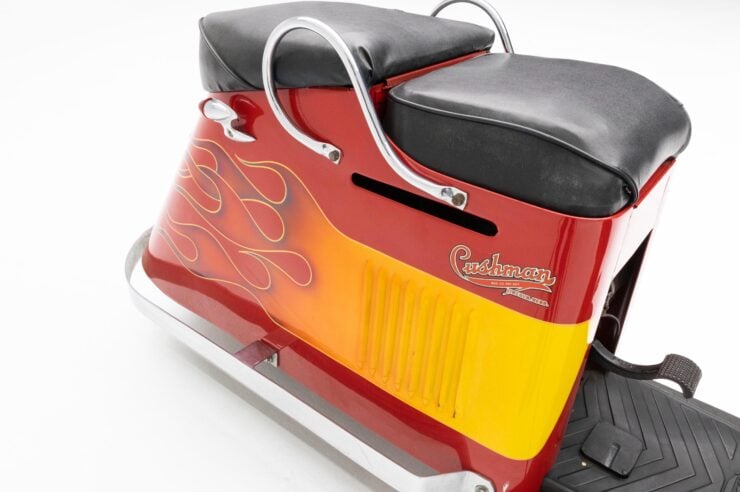 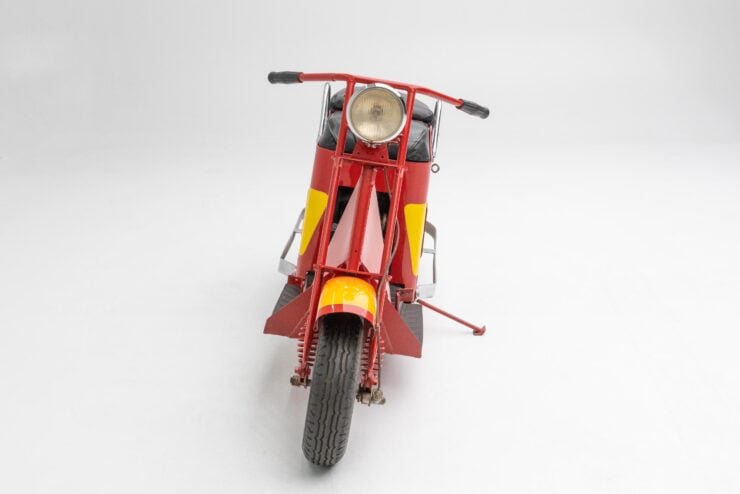 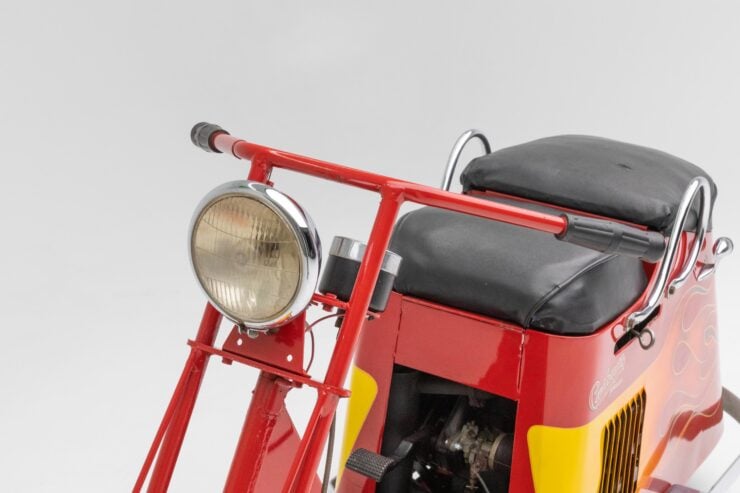