A Cushman-Powered Car with a Cushman Husky Model 53A Scooter 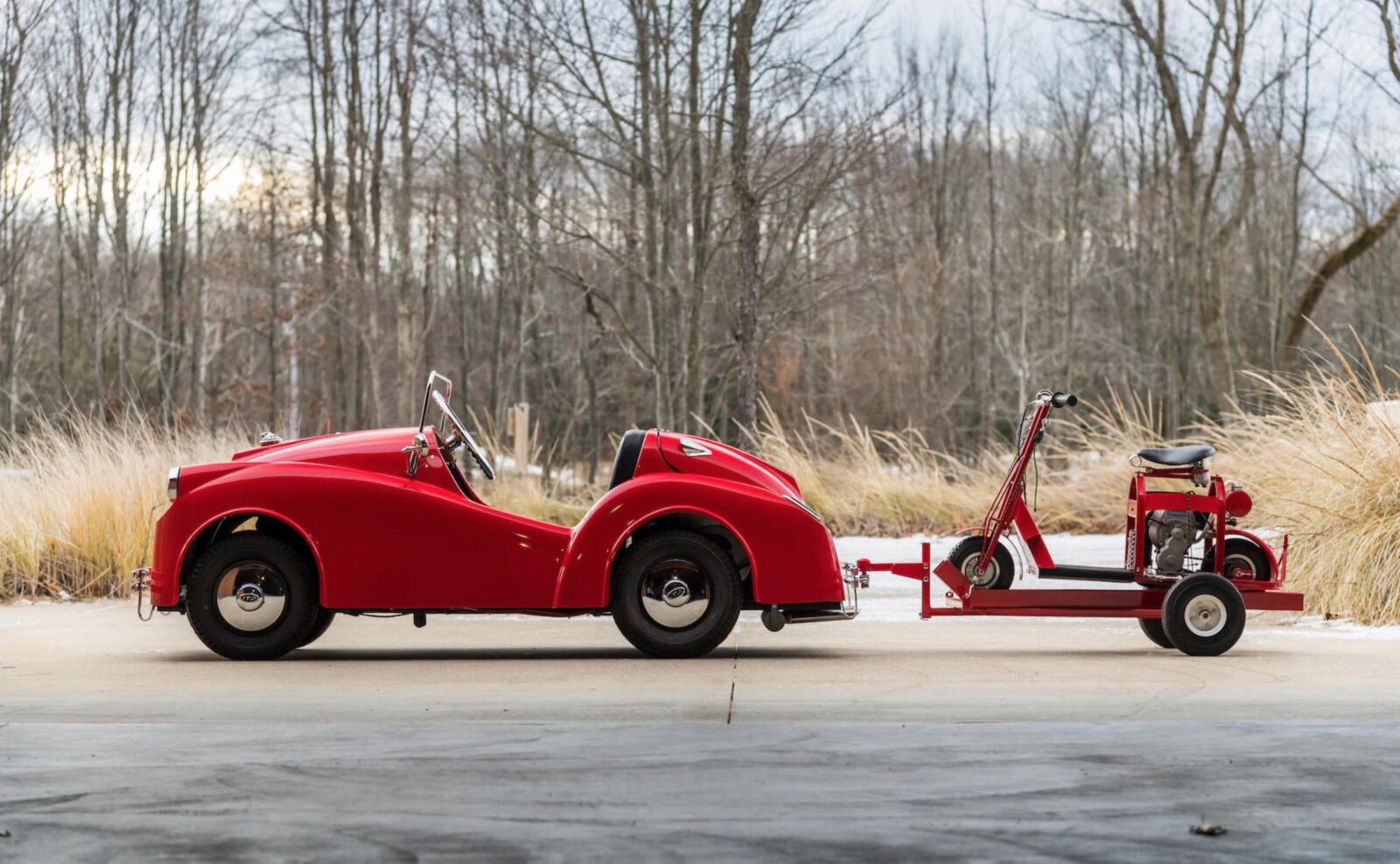 This Cushman combination is likely one of a kind – the car originally started life as part of a fairground carousel ride before possibly being repurposed as a Shriner car at some point. Shriners have entertained the public on Memorial Day parades for decades, they often wear a fez and drive miniature motorized cars in a harebrained fashion in and around the floats.

The Cushman company never produced miniature cars, the company was largely centred around the production of the Husky four-stroke engine that first entered production in 1922. This engine was used in various forms to power everything from lawn mowers and farm equipment, to pumps, small boats, and scooters. 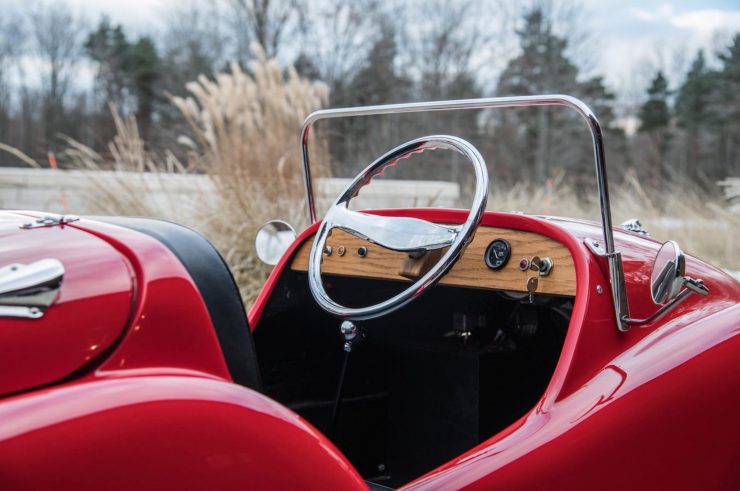 Cushman was most famous for their line of scooters, period competitors of Vespa and Lambretta that were uniquely American, and responsible for getting entire generations of young Americans onto two wheels for the first time.

The first Cushman scooters were a bit of a hail mary pass during the Great Depression – engine sales had slowed to a trickle and the executives at Cushman struck upon the idea of creating a very simple and inexpensive form of transportation.

This idea was a winner, and it would keep the company in business until well into the 1960s.

The scooter you see here is a Cushman 53A, it was developed as a very simple method of transportation for airborne paratroopers during World War 2. The 53A is powered by an air-cooled, single-cylinder, four-stroke 242cc engine developing 4.6 horsepower.

It has a very simple steel frame, a sprung saddle, and a throttle that rotates forwards to accelerate rather than backwards – to stop new riders from over accelerating and falling off the back. Though with only 4.6 horsepower on tap it may not have been particularly necessary.

The scooter rides on a simple steel trailer, hitched up to the back of the mini car. The mini car has a fibreglass body fixed to a steel frame, powered by a rear-mounted Cushman engine with an electric starter motor and a turn key ignition.

The car’s styling is likely based on the Crosley Hotshot, an American two-seat sports car that first appeared in 1949. The mini car version is capable of seating one child or one moderately-sized adult, it has a full-sized steering wheel, a wooden dashboard with a voltmeter, a simple on/off shifter connected to a centrifugal clutch and there are twin rear vision mirrors.

Bonhams will be offering the full set at the upcoming Las Vegas Motorcycle Auction on the 24th of January, the estimated hammer price is $5,000 to $6,000 USD, and you can click here if you’d like to visit the listing or register to bid. 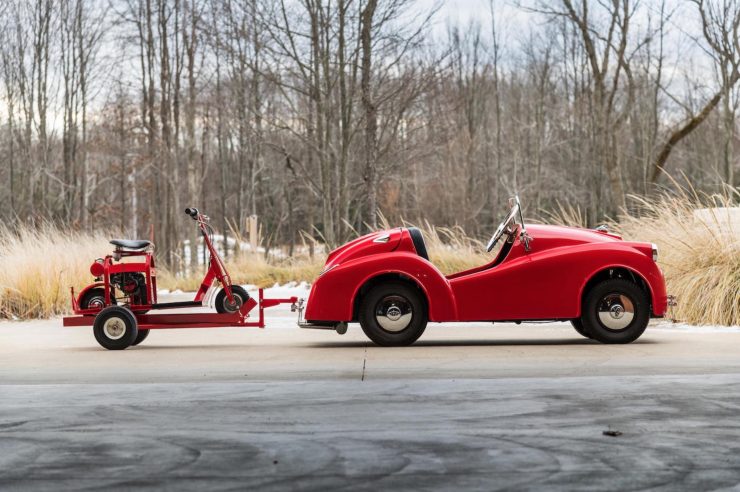 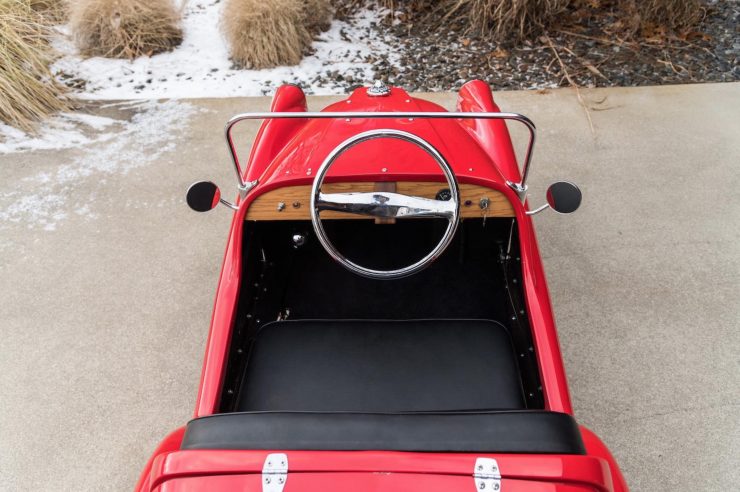 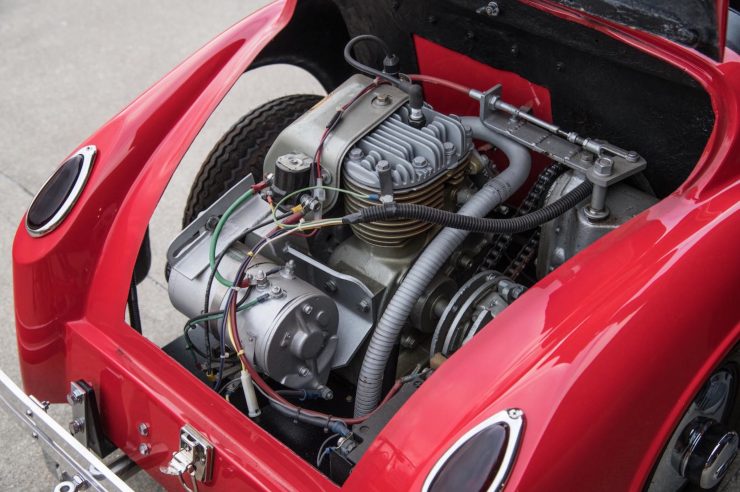 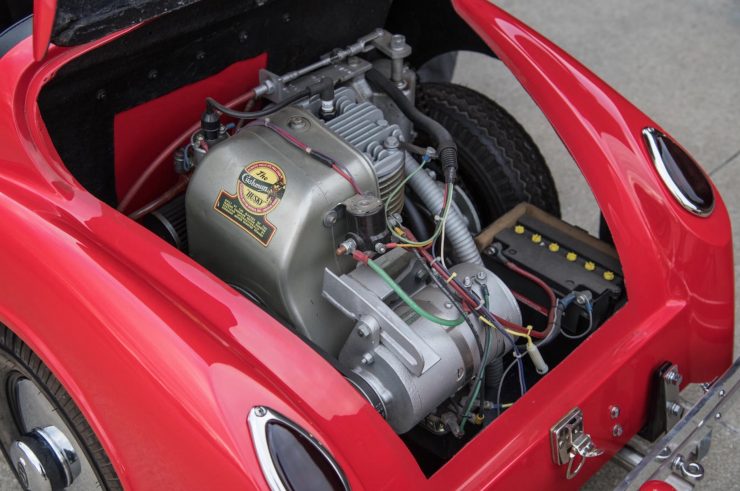 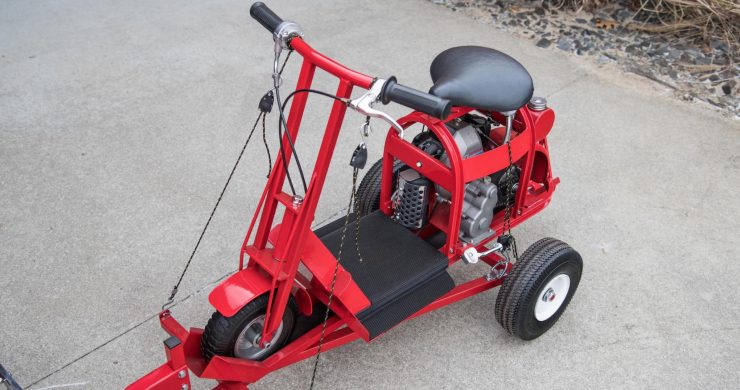 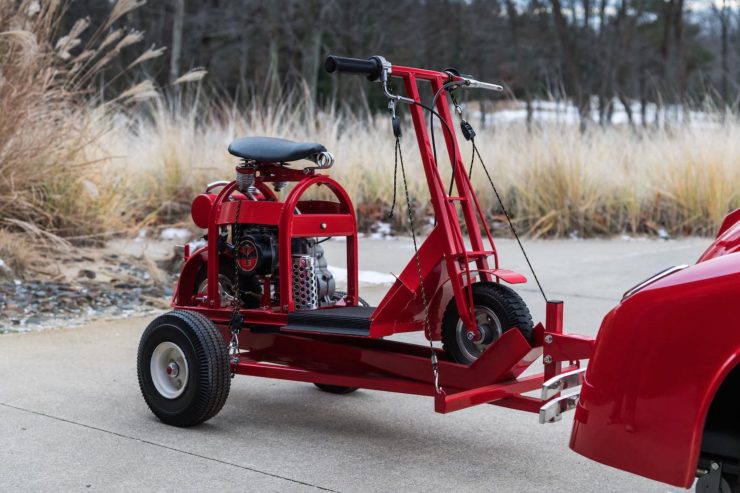 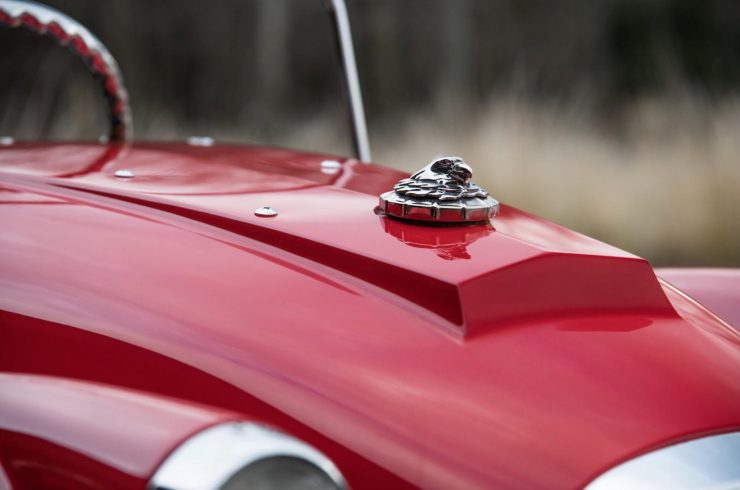 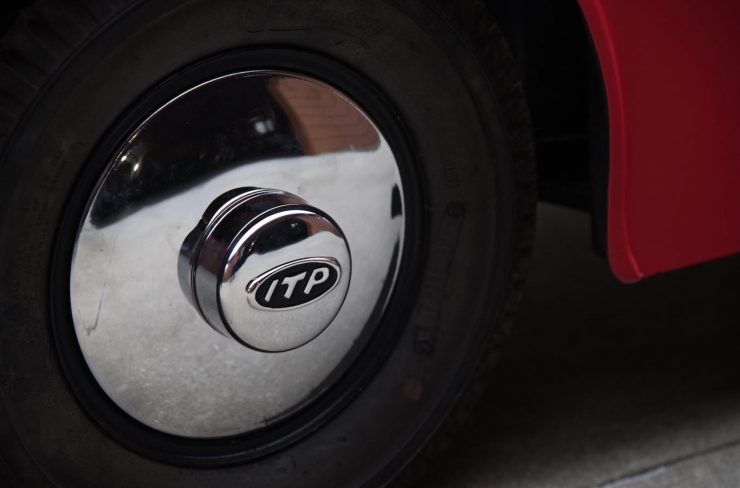 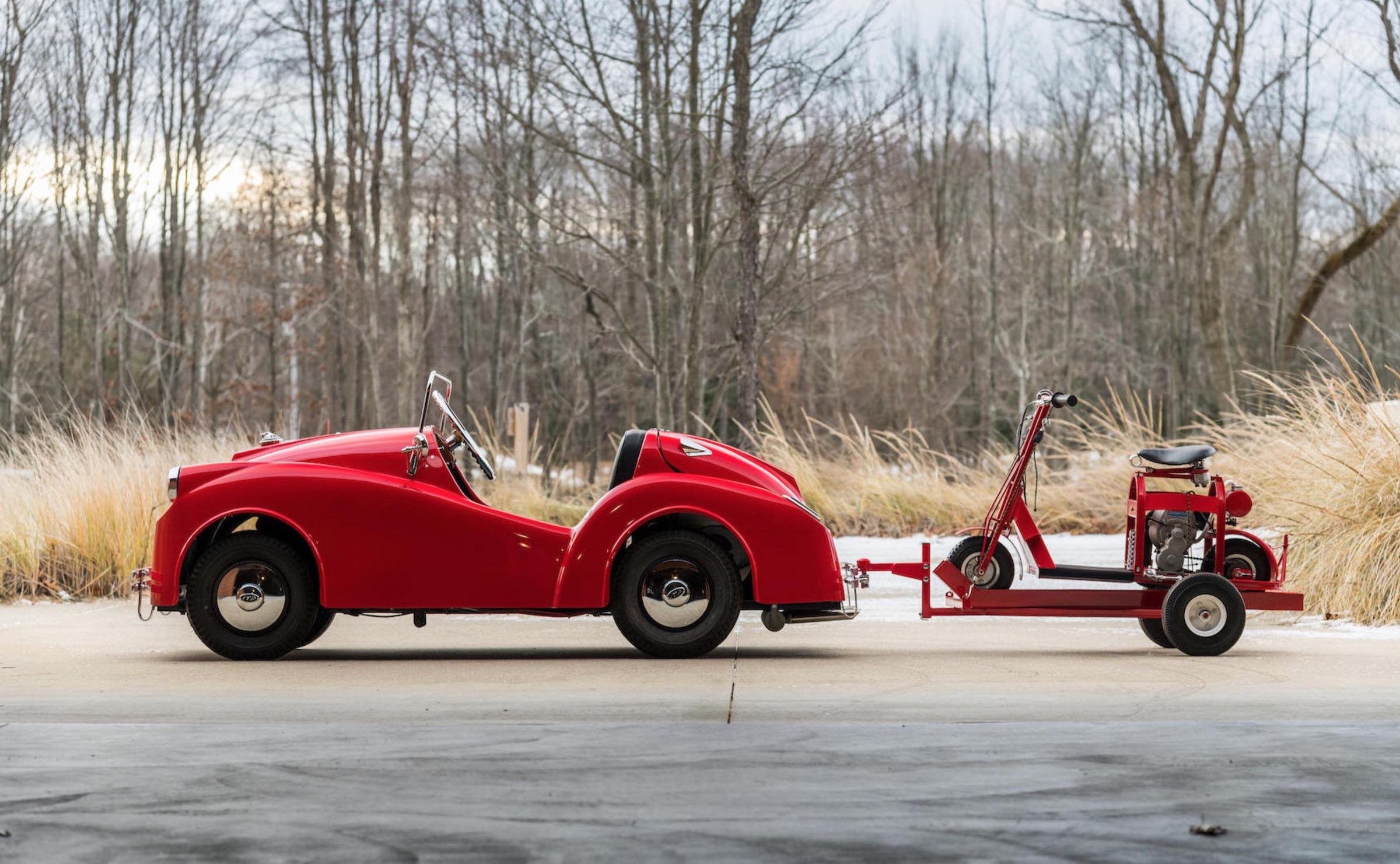