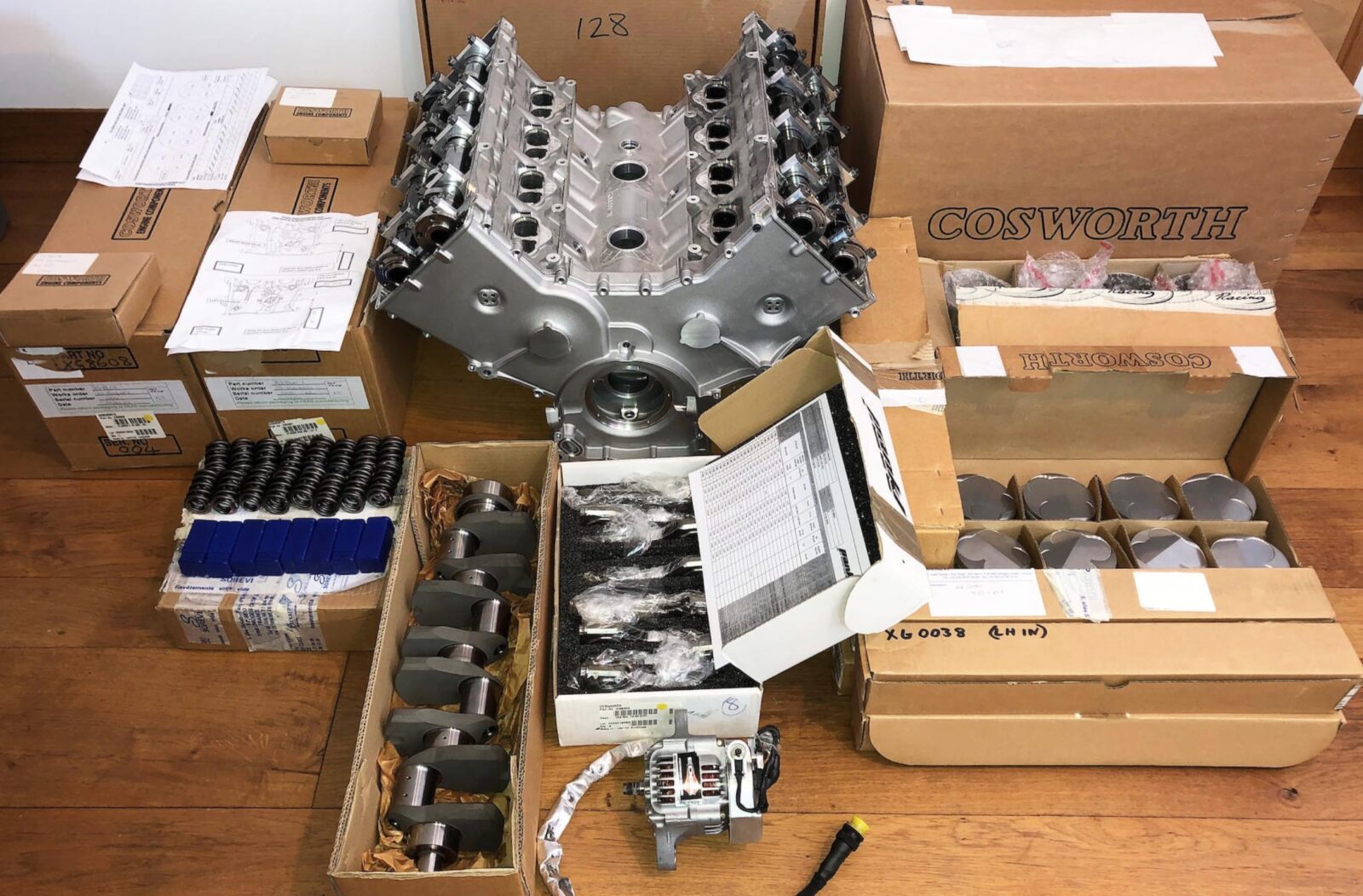 This is a brand new, unused Cosworth XG 3.0 litre V8 engine originally developed for the 2004 IRL IndyCar Series. It was nicknamed the “Chevworth” as it was badged as a Chevrolet engine, however it was entirely developed and built by Cosworth.

Once assembled and fitted to a suitable car this engine is capable of 700 bhp on methanol and 550 bhp on gasoline (with air restrictors). The XG won 3 races in it’s first season, a remarkable feat, after its use in IndyCar a modified version of the V8 was used in the Lotus T125 Formula 1 car and later in the Japanese Super GT500 series.

The engine is an aluminium-alloy 90º V8 with quad overhead cams (two per bank), four valves per cylinder, a steel crank shaft, lightweight alloy pistons, with a weight of approximately 120 kilograms (264.6 lbs). 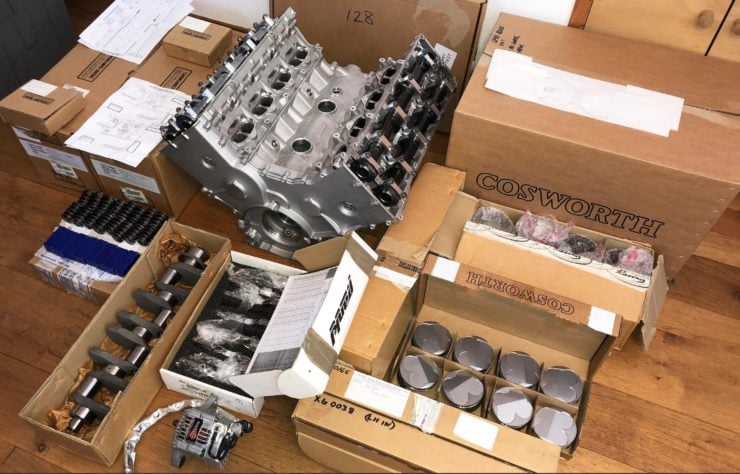 The Cosworth XG V8 you see here includes a block and sump assembly, a set of cylinder liners, the crankshaft, the main end cover, a pair of heads with camshaft caps, four camshafts, a set of pistons, a set of conrods (PANKL), a set of gudgeon pins, a set of valve springs, and a dyno tested alternator.

These components cost over £40,000 originally from Cosworth, or roughly $51,000 USD. Bonhams are estimating that this one will sell for £3,000 to £5,000, which would mean someone in need of an IndyCar engine is going to get an absolute bargain.

Cosworth has grown to become one of the most famous independent engine designers and tuning companies in the world, it was founded in 1958 by Mike Costin and Keith Duckworth who later said they formed Cosworth to “make a living messing around with racing engines”.

The name Cosworth is a contraction of the two men’s surnames with Costin supplying the “Cos” and Duckworth the “Worth”. Impressively Cosworth has collected 176 wins in Formula 1 as an engine supplier, ranking third behind Ferrari and Mercedes. 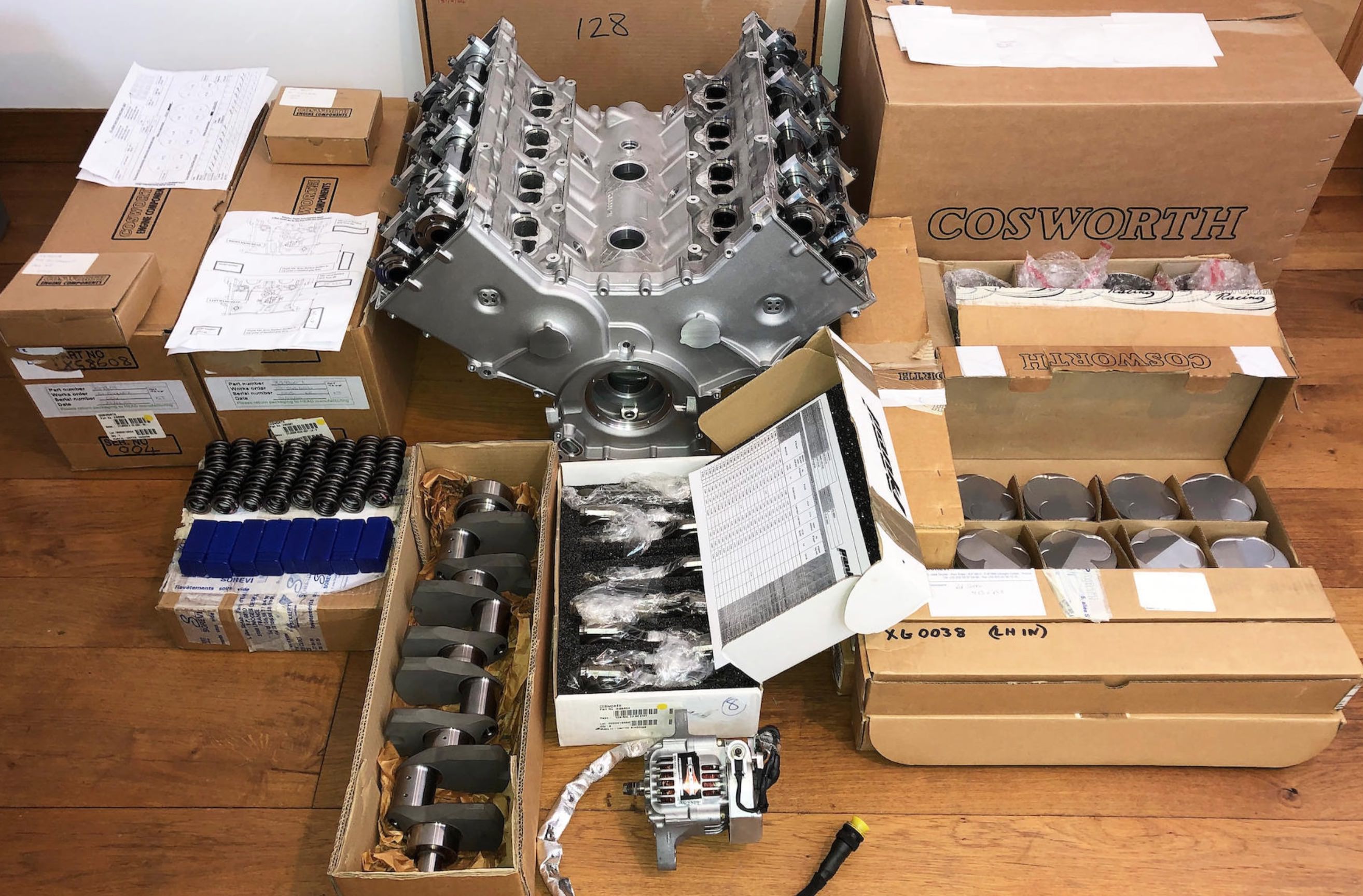